Trains have undoubtedly been one of the most transformative technologies in Japan’s history, dramatically changing the landscape of the country and its cities. They have also become much loved as an iconic and reliable form of transportation.

The origins of this train fever can be traced back more than 160 years. In July 1853, Yevfimiy Putyatin of the Russian navy made the first demonstration of a miniature steam engine to a small audience on his ship off Nagasaki. Among those present was Nakamura Kisuke, who later worked with the renowned inventor Tanaka Hisashige to construct a model based on what he observed.

US Commodore Matthew Perry’s brief 1853 visit—in which he handed over the American government’s demand that the shogunate open Japan up to trade—came a month before Putyatin’s. On his 1854 return to the Edo area, Perry invited members of the shogunate to take a close look at the wonders of the West.

According to Francis L. Hawks, who wrote the Narrative of the Expedition of an American Squadron to the China Seas and Japan, the Japanese were amazed by the artifacts that the US government sent as presents to the ruler of the island nation. Among these treats there was a “Lilliputian locomotive, car, and tender” and a circular track just over 100 meters long. This toy steam train immediately captivated the minds of the samurai.

Although the locomotive’s car was “so small that it could hardly carry a child of six years of age,” some of the officials who saw it running insisted on taking a ride. Instead of getting inside, they ended up abandoning their dignity and riding on the roof, clinging on desperately with their loose robes flying in the wind as it spun around the track. Hawks writes that at a later viewing, Japanese spectators were “unable to repress a shout of delight at each blast of the steam whistle.”

One of the samurai who boarded the train, however, offered a different perspective in his own personal record. Kawada Hachinosuke described how he observed the vehicle, sketched it, and made notes for further study. He apparently climbed onto the roof to experience the train in motion himself out of a spirit of scientific inquiry.

Held Back by the Shogunate

This gift train played a part in fueling the public discontent that led to the downfall of the shogunate in the Meiji Restoration. For members of the educated elite, it was a visible and persuasive argument that Japan was an undeveloped country, held back from the gates of technological progress by shogunate policies. For many intellectuals, sakoku—the period of general international isolation enforced by the Tokugawa rulers since 1635—diverted Japan from the natural paths of advancement followed by other countries, which benefited from the free exchange of knowledge.

While foreign pressure on Japan to import the technology began in the 1850s, the first railway was not built until after the establishment of the Meiji government. Negotiations to find the necessary investment began as soon as political power was formally restored to Mutsuhito, Emperor Meiji, in 1868. Richard Brunton, a British railway engineer who had been appointed by the new government to build lighthouses, was among those who advised on plans to build a railway line between Tokyo and Yokohama.

It was a natural choice for Japan’s first rail connection. Tokyo was the capital and center of political power, and nearby Yokohama was an important international settlement where hundreds of foreigners lived, including members of diplomatic missions and experts hired by the Japanese government to introduce Western methods and technologies. News about the plan spread rapidly, attracting investors overseas. Foreign personnel, most of them British, were hired to make the railway a reality.

A Symbol of Japanese Modernization

During the creation of Japan’s first railway line, foreign experts were involved in every aspect of the project, from laying the tracks to building the stations. None, however, worked without the oversight of Japanese officials. Inoue Masaru was one of the leaders who supervised the project.

He was a member of the Chōshū Five, a group of samurai who went to study in Britain in 1863, a few years before the collapse of the Tokugawa shogunate. Inoue learned civil engineering in London and returned in 1868 to his country, where he was appointed head of the Railway Bureau in 1871.

He was one of the most prominent advocates of the introduction of the new form of transport in Japan, and is remembered today as the “father of the Japanese railways.” 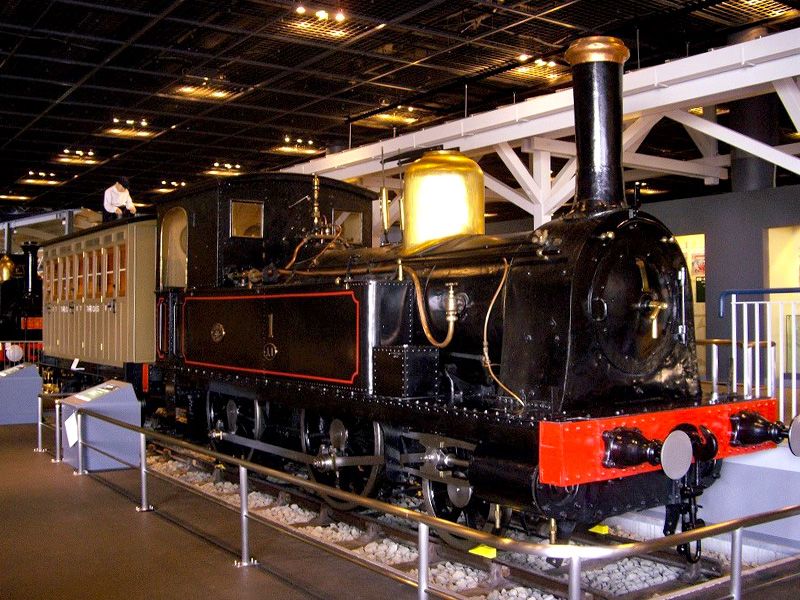 The first steam locomotive imported to Japan from Britain, built in 1871, is currently exhibited at the Railway Museum in Saitama Prefecture.

On October 14, 1872, Japan’s first railway line was officially opened. The emperor himself was present at the inauguration, along with government officials and diplomats, ambassadors from the Ryūkyū Kingdom (now Okinawa Prefecture), and Ainu chiefs, as described by the American orientalist William Elliot Griffis, who attended the ceremony.

Japan embraced railway transportation with enthusiasm, and soon imported more locomotives, rolling stock, and track to expand the network. In the years that followed, more Japanese cities were connected by train, and locomotives, together with brick architecture, became a symbol of the modernization of Japan. In 1896 Inoue Masaru established Kisha Seizō Joint Stock Company in Osaka as the first locomotive manufacturer in Japan. It was one of the pillars of railway development in the country until 1972, when it merged with Kawasaki Heavy Industries.

Even without the present from the Commodore Perry the Japanese would have adopted railway transportation sooner or later. But that dramatic 1854 demonstration in front of the Edo elite is remembered as one of the key elements that sparked the modernization of Japan.

(Originally published in Spanish on June 14, 2017. Content edited and added by the Nippon.com English editorial team. Banner photo: Tokyo Station, one of the most iconic buildings representing the early age of Japanese rail and the architecture of modern Japan.)