A Mandarin on an Aluminum Can

Wordplay is not always welcomed openly in Japan. Make a weak, but harmless pun—observing that there is “no ginger” (shōga nai) at the sushi restaurant and saying “it cannot be helped” (shō ga nai), for example—and listeners will greet it with shivers, as if a chill wind has just passed through. The standard retort to a “dad joke” or another attempt at humor that falls flat is samui, “ooh, that’s cold.”

These whimsical attempts at comedy are often literally dismissed as dad jokes—oyaji gyagu, or “old man gags.” Another term is share, which is used for witty, spur-of-the-moment wordplay in Japanese. Adding the da (inferior) prefix turns this into dajare. While these jokes may be cute in the conversations of elementary school children, the bar is set higher for adults. Only those particularly adept at punning, like rakugo storytellers, can get away with it.

For those learning Japanese as adults, though, even basic wordplay is still fresh and can be a lot of fun, as well as a helpful memory hook. A classic dajare is arumi-kan no ue ni aru mikan, or “a mandarin on an aluminum can.” The simple pleasure of seeing the linguistic connection between the can (kan) made of aluminum (arumi) and the mandarin (mikan), prefaced by the verb aru, noting where the fruit “exists,” is a chance to appreciate Japanese in its own right, rather than as a substitute for one’s own language.

This type of humor is ideal for learners who want to make vocabulary stick and get to grips with grammatical structures. It is easy enough to understand the above sentence as a whole, but the combination of its parts—no as the possessive marker for the can, ue ni meaning “on its top,” and the verb aru, for “is” or “exists”—is a challenging thing to encounter for the first time. Learning the complete phrase offers a gateway to comprehending and producing this kind of language in other contexts later on.

Homophones play their part in superstition as well as humor. Because “four” and “death” have the same pronunciation (shi), some buildings do not have a fourth floor, skipping directly from third to fifth. Rooms in hospitals and hotels often avoid including this unlucky number, and sometimes also “nine”, which can be pronounced the same as “suffering” (ku). By contrast the five-yen coin is considered a felicitious choice when making offerings at shrines and temples, as “five yen” sounds like a “karmic connection” (goen).

One of Japan’s most auspicious foods is the tai, or sea bream. This fortunate fish is associated by pronunciation with the word medetai, which itself means “happy” or “auspicious.” The fishing deity Ebisu—one of the Seven Gods of Fortune—is commonly depicted with a sea bream in hand. Tai regularly appears on the menu at weddings and other celebrations. It is also a standard part of New Year osechi ryōri, which contains many other foods with lucky linguistic connections. 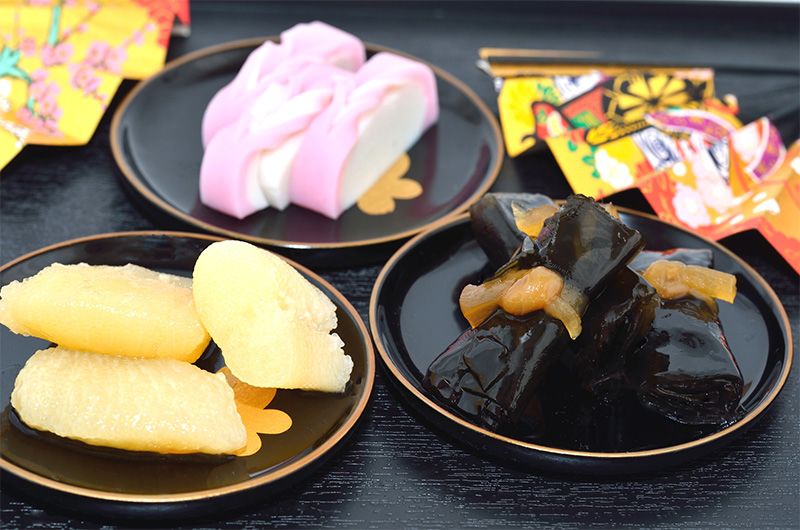 Osechi ryōri eaten at New Year typically includes kazunoko, herring roe (left foreground), which suggests “many children” and is considered lucky. The konbu (kelp) used to wrap konbumaki (sometimes pronounced kobumaki) kelp rolls (right foreground) is connected with yorokobu, or “to be happy.” Kamaboko fish cake (at back), meanwhile, is chosen for its auspicious colors rather than any linguistic associations.

Before an important test or game, students or athletes who want to win (katsu) might turn to katsudon, a dish of breaded pork cutlet over rice. Another popular option is the Kit Kat chocolate bar, whose name sounds like kitto katsu (sure to win/pass). According to Nestle, the association spread originally among Kyūshū students in 2002, as the dialect phrase kitto katsutō is even closer to the Japanese pronunciation of the treat, kitto katto. The grateful company has made the superstition a plank of its promotion strategy ever since.

Basic Japanese advertising puns are often an excuse for featuring a cute animal visual, such as a frog (kaeru) if there is mention of “change” or “return” (both kaeru). Tiny ceramic frogs are often placed inside wallets as charms to ensure that the money leaving them will “come back” once again. A more sophisticated example from Suntory plays on the literary classic The Pillow Book’s famous opening line: Haru wa akebono (In spring, it is the dawn [that is most beautiful]). The Suntory version is Haru wa agemono (Spring means fried food), suggesting a seasonal accompaniment for its whisky highballs.

Literary wordplay is of course common. When the poets pun, though, they get to call it art, rather than clunky “dad jokes.” Traditional Japanese poetry is full of similar sounds, as seen particularly in the collection Kokin Wakashū (Collection from Ancient and Modern Times), completed around the start of the tenth century. If the same term is used with two different meanings, it is known as a kakekotoba, or “pivot word.”

A mention of aki can refer to both autumn and a feeling of boredom or languor. Matsu indicates a pine tree and the verb “to wait,” “to yearn,” or (by strange coincidence) “to pine” for a missing lover. Intricate combinations of wordplay make translating classical Japanese poetry a formidable task. Although it has fallen out of fashion in serious verse, punning is still part of the arsenal of poets writing more broadly humorous senryū.

One particularly intricate example is a poem included in the Hyakunin isshu, the “Hundred Poems by a Hundred Poets” compiled by Fujiwara no Teika in the early thirteenth century. Written by the monk Kisen in the early ninth century, it speaks of his retreat from worldly affairs in the city:

In my little hut
southeast of the capital,
I live as I wish—
and yet I hear this place called
Ujiyama, Bitter Hills.

This translation makes the wordplay in the place name explicit: the uji in Ujiyama, located roughly southeast from what is now Kyoto, also carries the meaning “bitter” or “painful,” which people still entrapped in the bustle of city life think the poet’s meager existence must be. The shika in the third line, meanwhile, signifies “in this way,” the peace that Kisen has attained in his quiet hut—but it can also mean the “deer” that live in the wilderness where he has chosen as his home. And in an even more complicated play on words, according to some scholars, the tatsumi direction—literally lying between the dragon (tatsu) and snake (mi) in the Chinese zodiac, also used to mark hours of the day and compass directions—is followed immediately by shika, which the Japanese of those days classified as a sort of horse, the very next animal in the zodiac order.

Whether complex, playful, or simply worth a groan, puns are deeply rooted in the Japanese language throughout its history. At the risk of a cold breeze, it is worth digging them up from time to time.

(Originally written in English. Banner photo: a frog [kaeru] charm kept in a wallet or purse is said to ensure that the money you spend will come back [kaeru] to you again.)