In 1900 Shindō Nobuyoshi published Santa Kurō, one of the first Japanese books to feature Santa Claus. Its simple story and strong Christian theme sharply contrast with Japan’s largely secular observance of Christmas today, offering a fascinating glimpse into early views of the holiday along with rural life during the Meiji era (1868–1912). 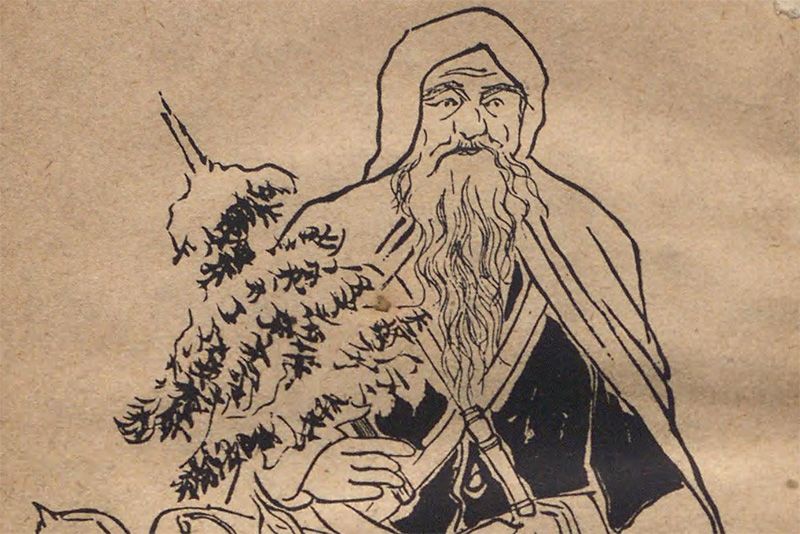 Santa Claus makes an appearance on the book’s inside cover. (Image courtesy of the National Diet Library)

The tale opens on a snowy evening at the Hayashi home in the mountains of Nagano Prefecture. The devoutly Christian family of three—father, mother, and eight-year-old son Mineichi—are sitting around the hearth talking and laughing. The heart-warming scene takes a sudden, exciting turn when Buchi, the family dog, drops a hat at the boy’s feet.

Father, realizing someone is in danger, readies a sled, and he and Mineichi plunge after Buchi into the stormy darkness. Following after the dog, the pair eventually finds a stranded traveler lying unconscious in the deepening snow. They take the frozen stranger back to the house, and Mother, desperate to save his life, warms him by frantically burning bundles of straw in the hearth. After a tense moments when it looks like all is lost, the traveler opens his eyes.

The wayfarer is Iguchi Gohei, a 50-year-old farmer from a distant village. After much rejoicing at the man’s miraculous recovery, the Hayashis share their religious beliefs with their new friend. Gohei, an adherent of the native Shintō faith, is dumbfounded by what he hears and becomes fearful for his own spiritual wellbeing. After three days convalescing, he profusely thanks his rescuers and returns home.

Saved by a Christmas Miracle

Jump to spring, and life for the Hayashi family is going along splendidly: Father is tilling the fields, Mother is tending to the silkworms, and Mineichi is busy with school. Life takes a sudden, tragic turn, though, when Father falls mysteriously ill. A doctor is called, then a pastor, and then a different doctor, but his condition only worsens. The seasons change, and at last, as autumn deepens, Father returns from death’s door in a wonderous recovery that has everyone, including the pastor, shedding tears of joy.

However, smiles quickly turn to grimaces at the realization that the fields went unplanted this year and the family has neither money nor food for the coming winter. Such worries are soon overshadowed, though, by the tear-jerking fact that little Mineichi will have to go without any Christmas presents.

Then, on Christmas Eve, their friend Gohei reappears bearing three great bags of gifts and two large rice bales, toted not by reindeer but 45 strapping young men. Among the presents the surrogate Santa brings are clothes, books, and even money. Christmas is saved and there is much rejoicing.

Mineichi sleeps through all the excitement. But like most children on Christmas morning, he is up at the crack of dawn, and to his amazement he finds his bed surrounded by gifts. In his excitement he tries to rouse his mother, who firmly refuses to budge from bed after her long ordeal. He has better luck with his father, and convinces him to read the note he found with his presents.

I offer you these gifts for following God’s teaching and for helping your father save the life of that traveler. Well done, my boy.

The old man from the north,
Santa Kurō (三太九郎)

The story closes with Mineichi showing off his haul to his friends, in another tradition that will be familiar to children today. With peace and prosperity returned, the bell of the village’s tiny church rings and the voices of carolers are heard in the distance as everyone joins in to cheer, “Hooray for Christmas, hooray for Sunday school, and hooray for Santa Claus!”

(Originally published in English. Santa Kurō can be read online at the National Diet Library's website.)