The Head Honcho: A Meeting with a Top Puppet Craftsman

Society Culture Jul 23, 2015
Amari Yōichirō is one of the last artisans making heads for traditional Japanese puppet theater. In this interview, he talks about his craft and shows us some of his creations. 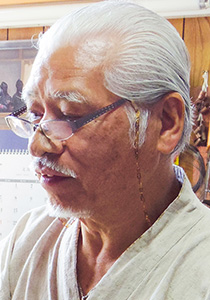 Born in Tokushima Prefecture in 1945. Has won renown as a maker of puppet heads for traditional puppet theater. His puppets have been used in the National Bunraku Theater in Osaka.

Puppet Theater in Osaka and Tokushima

Traditional puppet theater in Japan attracted droves of spectators in the seventeenth and eighteenth century as one of the country’s most popular forms of mass entertainment. While the art particularly flourished in Osaka and Kyoto, the province of Awa (now Tokushima Prefecture) in Shikoku also became an important regional center. 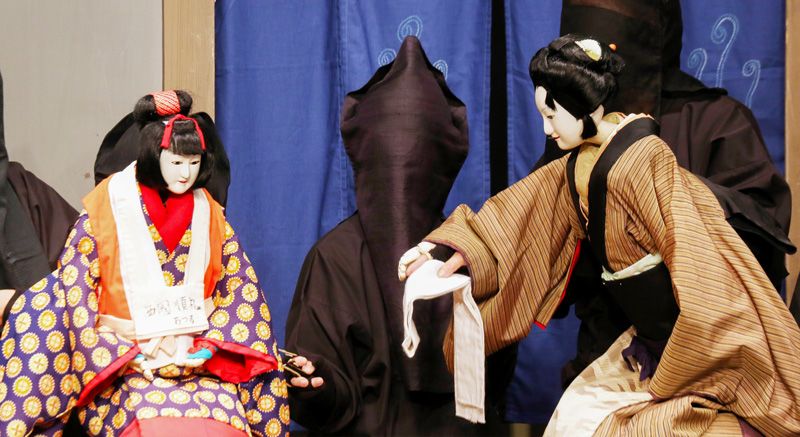 Awa ningyō jōruri performance of Keisei Awa no Naruto (The Courtesan and the Whirlpool of Awa).

Osaka-style puppet theater is now generally known as “bunraku,” while the variety once performed on around 300 village stages in Shikoku is called Awa ningyō jōruri. The popularity of both forms has much diminished over the years as other types of entertainment have gained prominence.

Amari Yōichirō is one of just a few artisans still making parts for the puppets used in performances. Nippon.com visited him at his Tokushima studio.

Up to ¥1 Million Per Head

Amari has been making heads for puppets for around 40 years. He built up early experience as a craftsman sculpting clay Hakata dolls and making shelves for wine and spirits. “I started my present work because the puppet maker at the old jōruri theater near where I lived left. I spent the first five years as an apprentice to a master craftsman.” Now, the local association of puppet head makers has fewer than 40 members and most of them are just hobbyists. “There are only about three or four people with long-term experience,” Amari says. 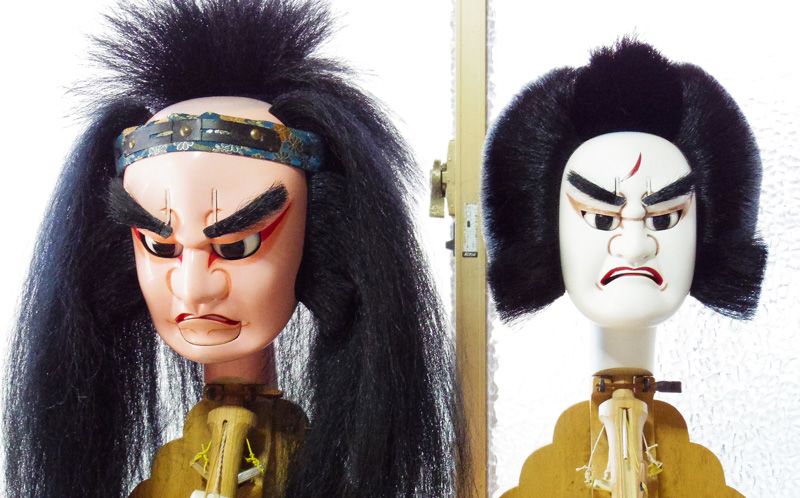 The heads for Awa jōruri puppets are larger than those for bunraku. As Amari explains, “Because the Awa dolls were used for performances on village stages from evening into the night, it was dark and difficult to see them in the light from oil lamps and candles. The best solution was to make the heads bigger so that they could be seen from a distance.” Bunraku heads are made from hinoki cypress, but the larger Awa heads need to use a lighter material and are made from paulownia.

It takes about a month to make each puppet head and Amari estimates that he has crafted about 150 so far, although he admits he has only really been completely satisfied with one or two of those. He tells us that the Awa head he is working on now costs ¥350,000. (By comparison, bunraku heads cost around ¥600,000.) When the hair is added that figure will rise to between ¥800,000 and ¥1 million. 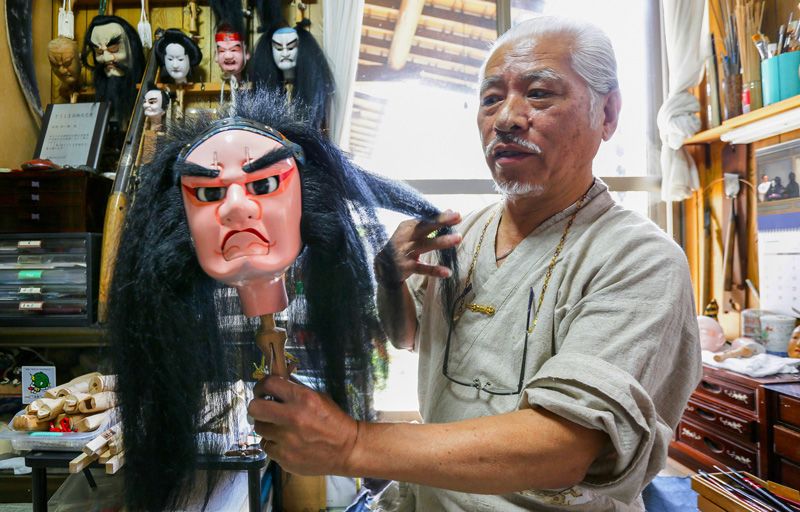 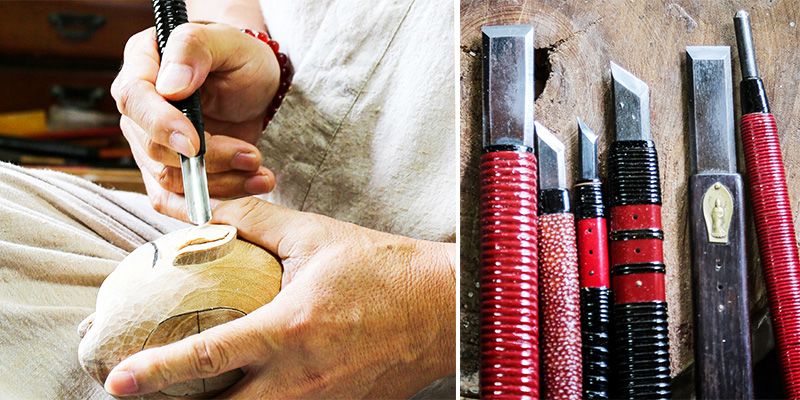 A Mask of Terror

Amari says that while men’s heads are not too difficult to make, bringing out the expression on women’s faces presents more of a challenge. He shows us a head that will be used for the character Kiyohime, who in the play Anchin Kiyohime densetsu falls in love with a priest called Anchin. When he runs away from her, taking a boat across the river Hidakagawa, her sense of betrayal becomes a mighty rage. She leaps into the river and swims after him, turning into a giant serpent midstream. 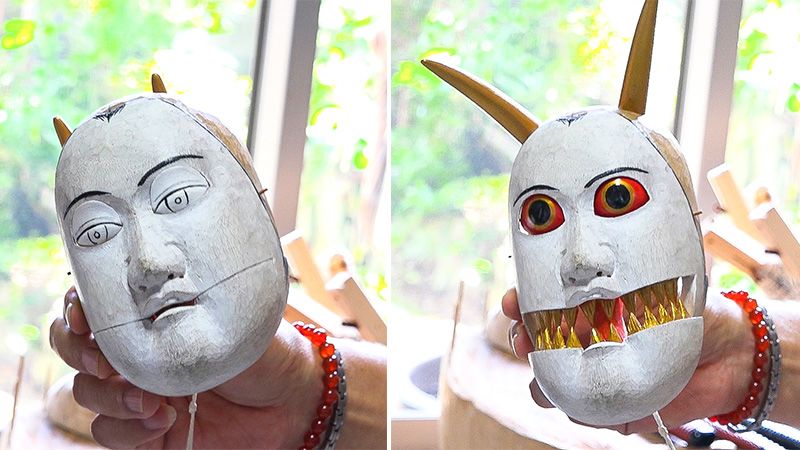 “Women characters are frightening if they’re betrayed.” To demonstrate, he pulls a string to turn the puppet’s face into a mask of terror. “This is what they become.” He adds, “The face has to be that of a sweet young girl at first or it isn’t effective.”

In Amari’s workshop there are also a number of faces with a more modern appearance. One is a bunraku-style version of Osaka’s famous Kuidaore Tarō doll.

Amari describes how he was visited by a joint team of professors from the University of Tokyo and Keiō University, who wanted him to make a puppet.

“They wanted to put seven sensors in the body. In the head, the hands, the neck, the kimono, and so on. When I asked why, they said that bunraku puppets were more expressive than people and they wanted to measure that through the movements of the body and hands. They were going to use it in making robots. It’s like an amazing dream that techniques from four centuries ago are influencing the latest technology.” 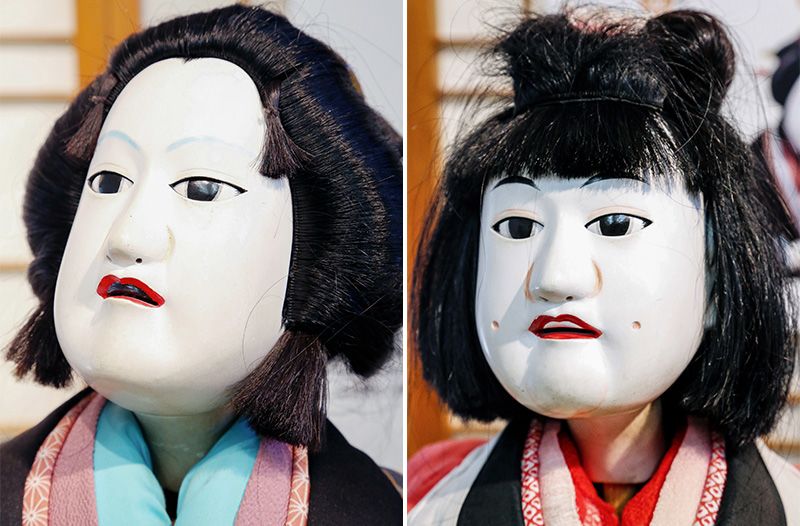 Mother Oyumi (left) and daughter Otsuru (right) from Keisei Awa no naruto (The Courtesan and the Whirlpool of Awa).

In this video, Amari shows some of the heads in action.