Society Jan 13, 2016
Civil engineer Abe Reiko travels the world applying her expertise in ensuring safety and quality on a wide variety of rail projects in Asia, including construction of metro lines in India and high-speed trains in Taiwan. 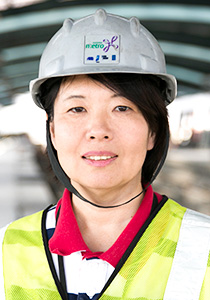 Focusing on Quality and Safety Management

Japanese civil engineer Abe Reiko recalls the first on-site meeting during construction of the Delhi Metro in 2007, a large-scale project in India’s capital of New Delhi. She had joined the project as an expert in charge of quality control. When introducing herself she heard murmurs among the workers, who were unable to contain their surprise at learning a woman was to be part of the team.

Unfazed by the commotion, Abe quickly stepped into her role overseeing an all-male team of around 250 workers. Not one to cut corners, she sternly doled out instructions to members of her crew; at the same time, though, she kept in mind local customs. These traits earned her the respectful moniker “Madam” from her coworkers. 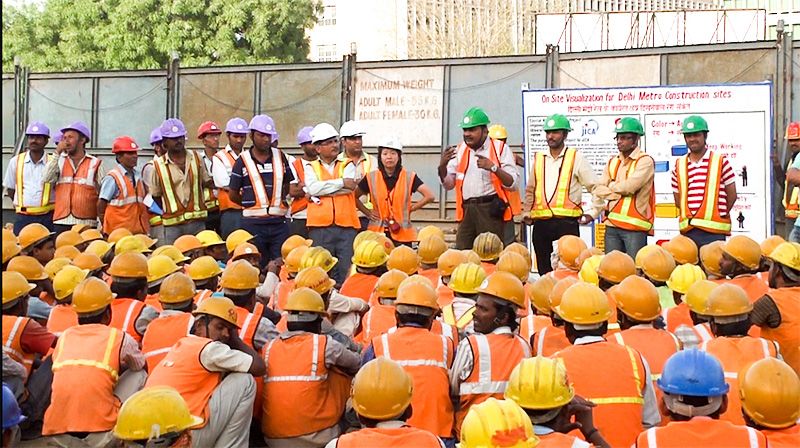 Abe, standing at center, in front of the all-male crew during an on-site safety meeting on the Delhi Metro. (Photo by Professor Akutagawa Shin’ichi of Kobe University.)

In 2010, Abe took over as head of safety and quality control of the metro project in India’s third largest city of Bangalore. Here she was not only the sole female engineer—she was the lone woman on-site among 40,000 workers involved in the massive operation.

On both projects Abe actively proposed incorporating the latest technology to ensure the health and safety of workers, introducing management techniques with the cooperation of the respective rail corporations and financial support from the Japan International Cooperation Agency. Among the systems she brought onboard was one to measure on-site dust levels using smartphones, allowing workers to determine when masks should be worn. The initiative was a success, winning special recognition from the president of the Bangalore Metro Rail Corporation. 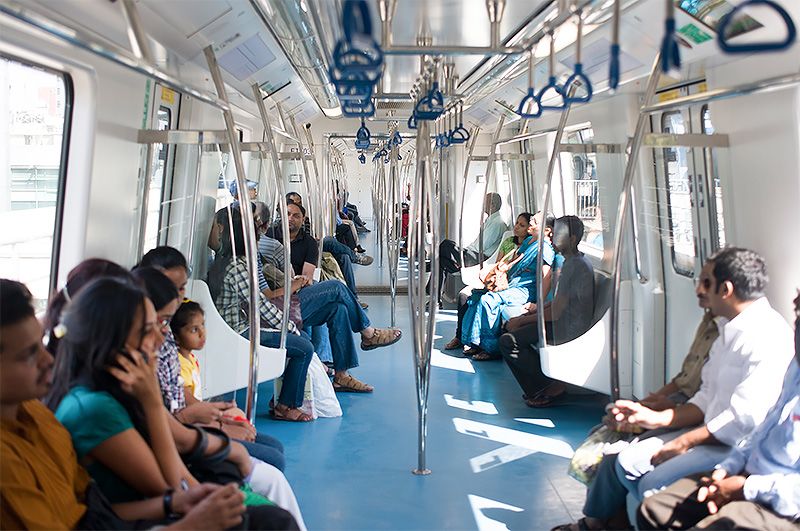 A carriage on the Bangalore Metro, which began partial service in 2011. Construction on the metro projects in Bangalore and New Delhi were supported by yen loans provided by the Japanese government. (Photo by Fujita Shūhei.)

Born in Yamaguchi Prefecture on the western tip of Japan’s main island of Honshū, Abe as a child would often go with her father to the Kanmon Straights, which divide Yamaguchi from Fukuoka Prefecture in Kyūshū. During these trips she would pepper her father with questions about the tunnel running under the waterway. As she grew, her desire to build on a grand scale led her to pursue a career in civil engineering. She did her undergraduate studies at Yamaguchi University, where she was the first woman at the science and engineering school. She then moved on to study rock engineering at Kobe University in what was then one of the few graduate programs in civil engineering willing to accept female students.

Even after graduating, Abe found it was gender, not competence, that determined prospects for employment in her chosen field. Through determination and with assistance from her academic mentors, though, she succeeded in 1989 in securing a position as the first female civil engineer at the general contracting firm Kōnoike. While a pioneering achievement, it illustrated how even four years after Japan had passed the Equal Employment Opportunity Act, legislation designed to ensure gender equality in the workplace, women continued to face significant barriers when forging careers.

Abe was involved in a number of large-scale projects at the firm, including redevelopment of the area around JR Osaka Station, but never had the opportunity to take advantage of her expertise at a tunnel construction site. The reason wasn’t lack of expertise—which, with a master’s degree, she clearly possessed—but rather a folk belief barring women from tunnels and mines for fear of rankling the jealousy-prone mountain goddess and bringing about accidents. While the wording of Japan’s Labor Standards Act didn’t specifically cite such an idea, regulations effectively excluding women from working on tunneling and mining sites remained on the books until the government struck those sections when the law was revised in 2006.

Faced with deeply ingrained gender bias in her home country, Abe chose to take her talents overseas. A company initiative enabling employees to study abroad sent her to Norway, where she joined an engineering program at the Norwegian Institute of Technology. But leaving Japan presented its own challenges, one of which was the English language. Although she was a proficient communicator, the sheer volume of English information Abe had to absorb in her studies took its toll, and in a moment of despondency she found herself aboard a flight back to Japan. With time in the air to reflect on the people who had supported her over the years, however, she decided upon arriving at Tokyo’s Narita Airport to immediately return to Norway. With fresh resolve, Abe completed her studies and gained her first hands-on tunneling experience working on Norway’s subsea North Cape Tunnel.

Back in Japan, Abe’s overseas experience paid immediate dividends, with her tunnel expertise and English ability winning her a position overseeing quality control on construction of underground sections of Taiwan’s high-speed rail network. The appointment was the culmination of a decade of patient determination to realize her childhood ambition of building tunnels.

Despite the discrimination she faced as a woman, Abe remains thankful to Kōnoike for the opportunities the company provided her. “I honed my craft there,” she says, “and they did a lot to help me move along in my career, such as providing the opportunity to study and train in Norway.” One thing she was unable to ignore, however, was the fact that she would never be able to put her expertise to work building tunnels in Japan.

In 2004 Abe transferred to a construction consulting firm, where she has taken part in an array of projects, including cleaning up chemical weapons abandoned in China by the Japanese Imperial Army following the end of World War II, construction of the Kiev Metro in Ukraine, and urban planning in Qatar. After putting in her time on the metro projects in New Delhi and Bangalore, Abe in 2014 became managing director of the Indian subsidiary of Oriental Consultants Global.

Abe notes that she didn’t set out to forge a career overseas. “If I were a man,” she explains, “I probably wouldn’t be in this position. Most likely I would have been content to stay in a domestic job at a general contractor. But as a woman, that wasn’t an option. To make it in this field I had to seek out challenges. In that process I made it to where I am now.” 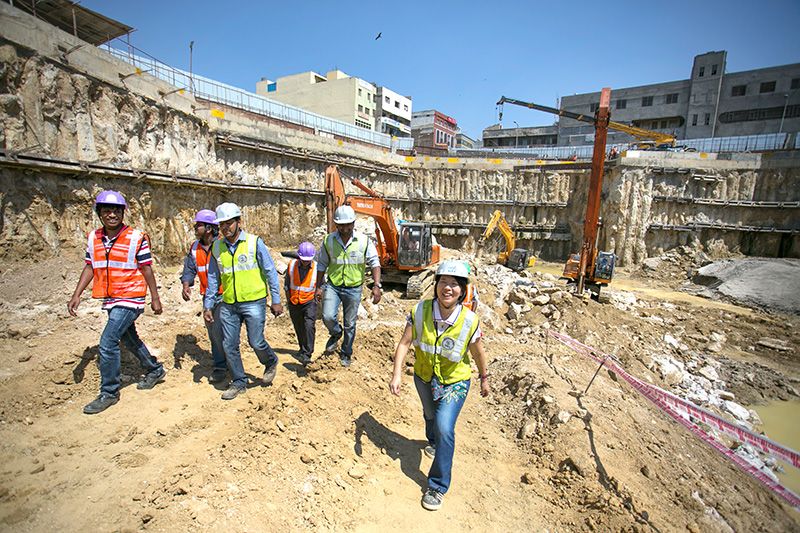 Unfazed by the heat, Abe makes the rounds at a construction site in India. (Photo by Fujita Shūhei.)

Abe now divides her time between her duties as company president and as a civil engineer overseeing quality and safety on construction projects, including the construction of a subway in the western Indian city of Ahmedabad. Asia’s ongoing economic growth has pressed Abe to constantly switch hats as she flies around the region, observing an expanding number of railway projects in emerging and developing economies like Indonesia, the Philippines, and Vietnam.

The responsibilities of a consulting company on large-scale railway projects overseas are as broad as they are numerous. They include drawing up plans for the rail operators based on studies of routes and stations, estimating demand for service, overseeing the bidding process, project management and assessment, and even operation and maintenance of lines once they are running. On such projects a consultant company can wield the same level of authority when overseeing construction firms as the chief authority of the project.

In cases where a client is embarking on its inaugural railway project, the consulting company will oversee each aspect of the venture, with the ultimate goal being to get the client to the point where it can run subsequent projects under its own steam. This is no simple objective, though, as Abe notes. “Emerging and developing countries are eager to acquire new technology,” she explains, “but there is a tendency to neglect more obscure aspects, such as quality and safety management. Japan leads the world in these fields and should take a prime role in providing input for the growing number of projects in the region.” 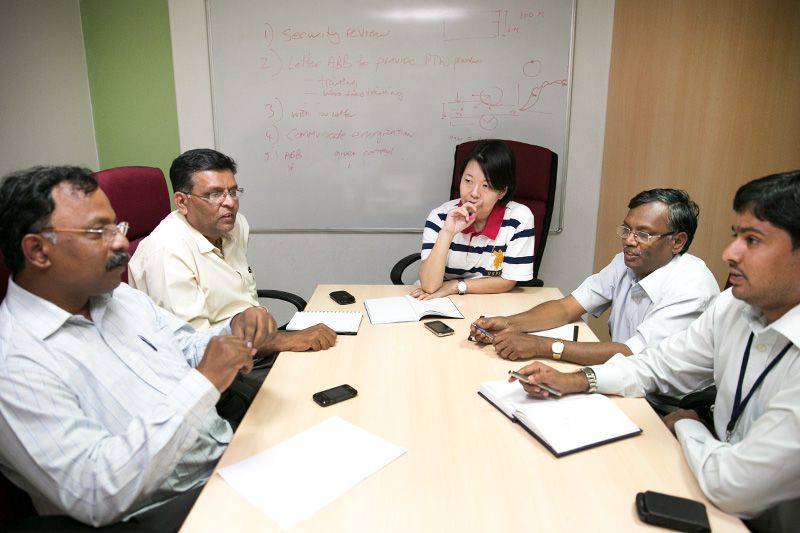 Abe, center, at a meeting in Bangalore. She makes a point of overcoming perception gaps on time management and safety by regularly communicating with local project staff. (Photo by Fujita Shūhei.)

Abe understands that the expertise of Japanese engineers is highly touted overseas, but as she points out, there is more at play than just skill when it comes to winning contracts. “Even though Japan is admired for its technical prowess, it lags behind rivals like China and South Korea in marketing its technology.”

An illustration of this was China beating out Japan to win the contract to build Indonesia’s first high-speed railway. Japan had a proposal on the table for several years, but China trumped it with a plan featuring comparable safety specifications at a lower fiscal burden to Indonesia. Abe warns: “Technology and money are distinct issues. Japan will cause itself considerable grief if it fails to realize this.” 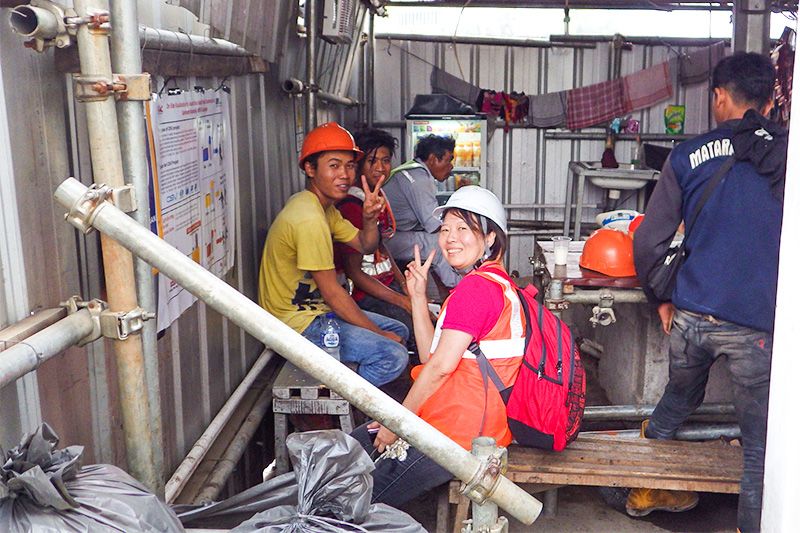 Abe takes a break with workers on the Jakarta Mass Rapid Transit.

A Model for Younger Workers 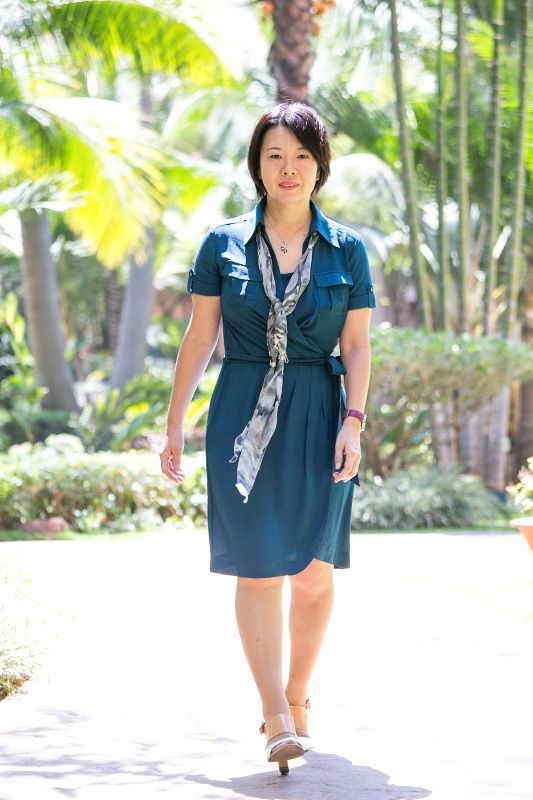 While known for being stern when instructing workers, Abe is normally soft-spoken outside of work. (Photo by Fujita Shūhei.)

Abe’s accomplishments have won her a starring role in campaigns by Japanese Prime Minister Abe Shinzō to export Japanese infrastructure abroad and shine a spotlight on the need to promote women in the workplace. She has appeared in a Japanese government-sponsored television commercial that aired on CNN and BBC, was featured in an article published on US news site Bloomberg Business, and was the focus of a special for Japan’s broadcaster NHK.

She was at one point reluctant to be the center of attention. Until five years ago she strictly declined media interview requests out of respect for her colleagues, saying there was no reason why she should be held above others in her field. Advice from her former university professor, however, changed her outlook. “He told me that if the media was urging me to step into the spotlight, then it was important for me to answer the call.”

Going forward, Abe hopes through her work to continue serving as a role model for aspiring civil engineers of any gender. As the head of Oriental Consultants India she welcomes the new challenge of running a large-scale consulting firm. Here she intends to focus her efforts on building the company’s portfolio.

With Japan recently winning the contract to build a high-speed railway linking Mumbai and Ahmedabad, Abe is undoubtedly looking forward to staying busy—on-site as well as in the boardroom—bringing Japanese bullet train technology to India.

(Originally written in Japanese by Harada Kazuyoshi of Nippon.com and published on November 27, 2015. English version updated on December 24, 2015. Banner photo by Fujita Shūhei.)