Traditional Crafts in the Modern Day

Society Culture Lifestyle Aug 10, 2012
The city of Sumida in Tokyo has a history of craftsmanship and light industry dating back to the seventeenth century. That influence remains strong even today. We look at a selection of the area’s shops, all of which have an original take on traditional techniques and crafts.

The Tradesmen and -Women of Sumida

The history of Sumida, Tokyo, is closely tied to the development of Japanese craftsmanship.

In the Edo period (1603–1868), local industries developed along the Sumida River, which was used to transport tiles, lumber, dyes, and other materials. A rich culture of craftsmanship blossomed in the area, which became the birthplace of Japan’s light industry by the start of the Meiji period (1868–1912). A wide variety of factories sprang up in the area, handling everything from metalworking and glass-making to the manufacture of celluloid toys and fiber and leather products. Following the Great Kantō Earthquake of 1923 and the bombing of Tokyo during World War II, the area’s industry supported the general populace as a base for the production of daily goods and various components.

Even today, Sumida is known for its smaller enterprises, and the municipal government is actively developing the area with craftsmanship as the focus. The development features a variety of policies intended to foster industry and pass on the skills needed for the traditional crafts to future generations. These strategies are also part of the policy of raising brand recognition for the Sumida area. One example is the establishment of a category called Sumida kōbō shoppu (Sumida craft workshops), or outlets where crafted goods are both made and sold. The idea is to make the world of craftsmanship feel more familiar to consumers.

The area around Tokyo Skytree is dotted with such shops that offer charming items with original ideas and designs based on traditional crafts. Here we visit places that make traditional Japanese paper, folding screens, and chopsticks to convey the spirit of the tradesmen and -women who work there. 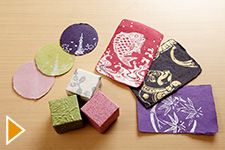 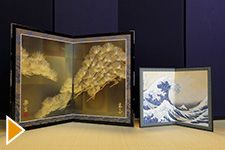 Folding Screens Made to Any Order 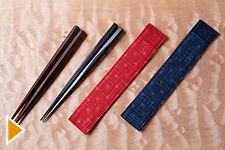 Your Source for Perfect Chopsticks

Kamism Lab is a shop that specializes in manufacturing traditional Japanese paper, known as washi or wagami. The Kawashima Planning Company opened the shop in April 2011 to put traditional techniques to use in creating paper with modern designs and colors, for use in interior design. The paper is typically placed on walls or around lighting fixtures. In addition to the paper, the shop also sells stationery and accessories, which are neatly lined up on shelves around the shop. According to Kamism Lab’s Watanabe Mayuko, customers often find it hard to believe that some of the items for sale are made from paper.

Visitors to the shop can get hands-on experience in some traditional techniques and crafts, such as woodblock engraving, kushibiki, and suminagashi. Kushibiki is a technique that involves scraping a comb (the kushi) across plaster to create beautiful patterns. Suminagashi is an art with over 1,000 years of history. Ink (or sumi) is dropped into water and the intricate patterns that form on the surface are carefully transferred onto a sheet of paper. Watanabe says that the main objective is to get customers to appreciate the ever-expanding possibilities that exist with art on paper.

The products and tools on display give customers a deeper understanding the traditional crafts. The shop’s masters demonstrate their engraving skills right in front of visitors’ eyes.

Woodblock prints. The person at left has created a wonderful impression of Tokyo Skytree. Visitors can experiment with the kushibiki technique shown at right.

A piece of paper with “thank you” written in many world languages (left). The red corsage is made with the same paper. Paper that has been damaged in the printing process, or that is left over after wallpapering, is sold at a discount in one corner of the shop (center). Postcards and drink coasters are ideal souvenirs (right).

Watanabe Mayuko from the sales department and Nakanishi Katsuteru from the production department.

• 3-7-11 Narihira, Sumida-ku, Tokyo (two minutes from the B2 exit of Tokyo Metro Oshiage station)
• Tel. 03-5637-8571
• Opening hours: 10:00 to 18:30 (workshop closes at 16:45). Closed on Tuesdays and national holidays, unless the holiday falls on a weekend. (Workshop closed on Mondays too.)
• Parties of four or more must make a reservation to visit the workshop, where visitors can try their hand at making woodblock prints and kushibiki plaster patterns. It costs ¥1,000 to make three postcards with a personalized woodblock and takes around 15 minutes.

Folding Screens Made to Any Order

Kataoka Byōbu Ten is a shop that uses traditional techniques to make original folding screens. Traditional screens commonly feature calligraphy or other artwork and are sometimes covered in gold leaf. Kataoka Kyōichi, the second head of the company since its founding, explains that his shop does more than that: “Some customers wish to preserve an important kimono or obi by incorporating it into a folding screen, and we work to make that possible for them.” Kataoka has experience meeting a wide variety of customer requests. From a necktie that a family held precious to the kesa robe worn by a Buddhist monk, Kataoka Byōbu Ten has worked many different items into its screens. The shop has also used the cloisonné technique and even made 3D folding screens with acrylic. “Telling a customer something can’t be done is like turning your back on him or her,” says Kataoka, who tries never to let that happen.

Inside the shop is an exhibit area officially recognized by Sumida in its municipal list of “Small Museums.” Here customers can browse a wide variety of folding screen pieces. Visitors who make a reservation can also take a lesson in constructing a special kind of folding screen that uses a mechanism to change the picture displayed depending on how the screen is unfolded.

Kataoka Byōbu Ten breathes new life into the world of folding screens, as seen in the highly original works on display. The two items at right are popular among foreign visitors as souvenirs.

The museum area displays the tools that are used and shows how the screens are created.

Kataoka using a large mockup to illustrate how the special folding screens are created. Visitors can make their own folding screen in the shop’s classroom.

The Kataoka family. From left, Mitsuko, Kyōichi, Yui, and Sai.

• 1-31-6 Mukōjima, Sumida-ku, Tokyo (one minute from the front exit of Tokyo Skytree station on the Tōbu Line; five minutes from the A4 exit of Honjoazumabashi station on the Toei Asakusa Line; six minutes from the A3 exit of Oshiage station on the Tokyo Metro Hanzōmon Line).
• Tel. 03-3622-4470
• Opening hours: 10:00 to 17:00 (closed at year end and at unannounced times when there are unforeseen circumstances).
• The workshop requires booking for 10 people or more (maximum of 50 people). The crafting course costs ¥3,000 and takes about two hours.

Your Source for Perfect Chopsticks

The owner of Edokibashi Daikokuya is Takeda Katsuhiko, who was originally a salesman at a company selling dining utensils. Takeda thought that the chopsticks his employer stocked were difficult to use, so he consulted with the craftsmen who made them and asked for new ones. Even those were not up to his ideals, though, and he decided to make his own. That was 20 years ago. Now, his name is known throughout the country for the chopsticks he creates.

Takeda has made a number of original products, but his heptagonal (seven-sided) chopsticks are perhaps the most famous and cannot be found anywhere else. Chopsticks are generally held between the thumb, index, and middle fingers. These three fingers can grip chopsticks whose cross section is heptagonal or pentagonal at just the right angle. Takeda refers to this as the “aesthetic beauty of odd numbers.” Until Takeda started making them, it was considered impossible to cut a circular chopstick into regular heptagonal shapes, because the number seven does not evenly divide the 360 degrees in the circle. Takeda used his long years of experience to beautifully carve out the seven sides from a circular length of wood.

A good set of chopsticks can improve the enjoyment of a meal. Takeda says that since food is the source of sustenance for your body, the tools that you use to transport it to your mouth are important—and you should therefore be particular about which ones you use.

Heptagonal chopsticks.The heptagon is easier to hold than a square and less likely to slip than a circle.The chopsticks are laid out in the store without any packaging so that customers can pick them up and assess how they feel.

The shop is in a separate location from where the chopsticks are made, but visitors can sometimes see the finishing process take place in front of them. The height of Tokyo Skytree was selected to be 634 meters for the easily remembered alternate pronunciations of its digits. The figures six (mu), three (sa), and four (shi) form Musashi, the old name of the Tokyo region where it stands. To share some of the good luck, Takeda has made chopsticks (right) that have six sides at the top, three sides part way down, and four sides towards the tip. The sections with three sides are the easiest to hold. These chopsticks are used in the restaurant on the observation level of Tokyo Skytree.