Society Lifestyle Jun 3, 2013
Love hotels are deeply rooted in Japanese society today. Kim Ikkyon is a young scholar who has specialized in tracing their historical evolution. Here we draw on her findings to sketch the changing face of love hotels.

A Lovely Place to Go 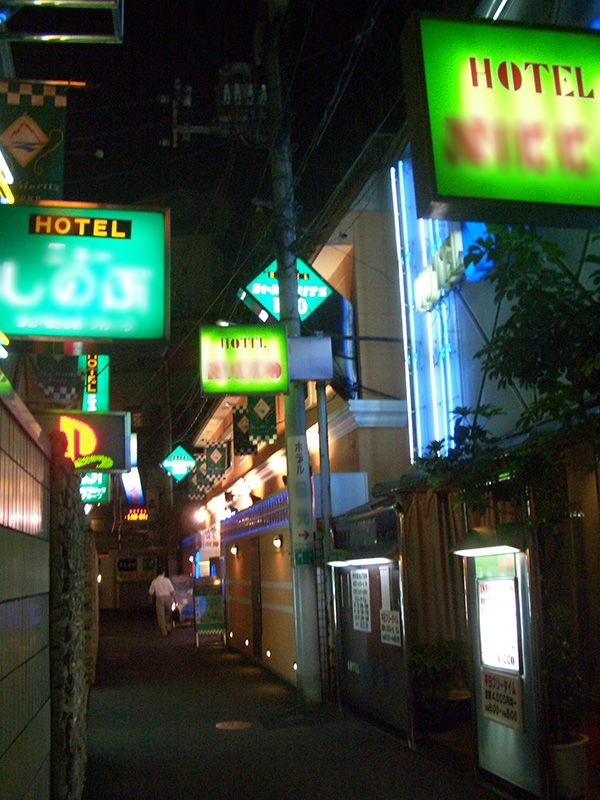 “Love hotels” have long been a fixture of Japanese society. Yet not so many people are aware of about how these establishments—catering to the romantic rendezvous or tawdry affair—have evolved over time. Most Japanese simply take love hotels for granted, while foreigners often file the phenomenon under the “bizarre Japan” category.

A visitor to Japan won’t have too much trouble recognizing a love hotel—although they are no longer as garishly designed as before. Unlike an ordinary hotel, love hotels tend to have few if any windows to allow for privacy. Similarly, the parking lots are usually concealed behind a barrier so customers can come and go without attracting attention. Sometimes the name of a hotel alone is all the hint a passerby needs to recognize a love hotel—something too over-the-top for an ordinary hotel or dripping with double-entendre. And finally, if nothing else, the sign outside listing the prices is a dead giveaway, whether the full price for an overnight “Stay” or just over half that amount for a two-hour “Rest” (preceded, one suspects, by a fairly vigorous spurt of activity).

Inside, along with an enormous double-bed and array of “adult goods,” today’s love hotels come equipped with an array of amenities, including massage chairs, Jacuzzis, videogame consoles, and karaoke equipment. And all of this comes at quite an affordable price. But the love hotels, in order to survive, must continually update their menu of services and facilities to meet the needs of demanding customers.

One young scholar who has tracked how love hotels have evolved over time, and how that evolution reflects changes in Japanese society, is Kim Ikkyon, a lecturer at Kobe Gakuin University. She has presented her findings in a book for the general reader, titled Rabu hoteru shinka ron (The Evolution of Love Hotels). In it, Kim looks at how love hotels, like any other cultural phenomenon, emerged as a result of broadly meeting a societal need—rather than being the conscious design of any one individual.

Precursors to the Love Hotel

According to Kim, “professional” ladies back in the Edo period had rented rooms to entertain their clients, but it was only in the early Shōwa era (1926–89) that ordinary couples began to make use of the lodgings called enshuku (literally, “one-yen dwellings,” which are at the origin of the modern love hotel). These establishments offered guests the option of paying one yen to rent a room for a few hours rather than paying more for a whole night. These hotels were frequented from everyone from “women of the night” to ordinary women.

Many of the hotels had to close down during World War II, however. For some time after the war, couples had to turn to outdoor spots—like the park in front of the Imperial Palace in Tokyo or the area around Osaka Castle—for a romantic rendezvous.

A few years later, as Japan began to recover from the war, construction of residential areas and commercial facilities progressed rapidly, spurred by the boom in demand during the Korean War. Huge numbers of workers poured into the urban areas, raising demand for lodging facilities and causing a wave of hotel construction. Couples also made use of these new facilities but many only wanted to use a room for an hour or two. In response, the proprietors set up hourly rates and earned huge profits through this “revolving-door” approach.

Inns geared to attracting couples began to be concentrated in and around the entertainment districts. At some point these places came to be widely known tsurekomi inns—from the verb meaning “take into” or “bring along.” That is to say, if a bar was the spot to “pick up” a female companion, the tsurekomi inn was the place to take her at the end of the night.

The number of these inns mushroomed in the late 1950s and early 1960s. In central Tokyo alone, there were around 2,700 tsurekomi inns by 1961. Many of the brothels moved their operations to these locations in response to the Prostitution Prevention Law enacted in 1958, and others, seeing the easy money to be made, converted their own residences into these shack-up spots. This was all happening in the period leading up to the 1964 Tokyo Olympics.

View of the exterior and interior of a "tsurekomi" inn. A mirror is installed behind a sliding screen to make the room seem more spacious and spice up things a bit. (Photo courtesy of Kim Ikkyon.)

No Room for Romance

How can we account for the heightened demand for tsurekomi inns around that time? According to Kim, this boom was closely connected to the housing situation in Japan, characterized by a small number of rooms used for various purposes. A room might serve as a living room during the day, a place to eat during meals, and then an area to set out the futons at night to sleep.

This arrangement meant that there was no place where a couple could be alone, Kim observes, because children or parents were sharing the same rooms. With no room of their own, married couples were hard-pressed to secure a private corner where they could enjoy themselves and perhaps even expand the family unit. Not surprisingly, then, married couples flocked to the tsurekomi inns along with the hordes of young lovers and professional sex workers.

Another great attraction of these establishments was that they included bathing facilities. Customers had to wait their turn to use the bath inside a tsurekomi inn but once their room number was called a couple could have a whole bath to themselves. This was a great luxury at a time when most homes did not have a bathtub and people frequented public baths instead.

The term “love hotel” first came into use when the tsurekomi inns went a bit upscale, from around the late 1960s to the early 1970s, according to Kim’s research. This was a period when the high-growth Japanese economy entered a period of stability after surmounting the “oil shocks,” and the size of the middle class swelled rapidly. This was an era of peak dynamism—a time when the generation of baby-boomers reached adulthood and Japan was described as having a “100-million-strong middle class.”

The Osaka World Expo of 1970 sparked a boom in foreign travel, as Japanese people longed to visit the United States and Europe. Amidst this mood, Japanese-style inns came to be looked down on as rather gloomy places. This led to the tsurekomi inns to undergo a great transformation, as owners used the huge profits they had pocketed to create Western-style hotels with flashy exteriors and lavish amenities. 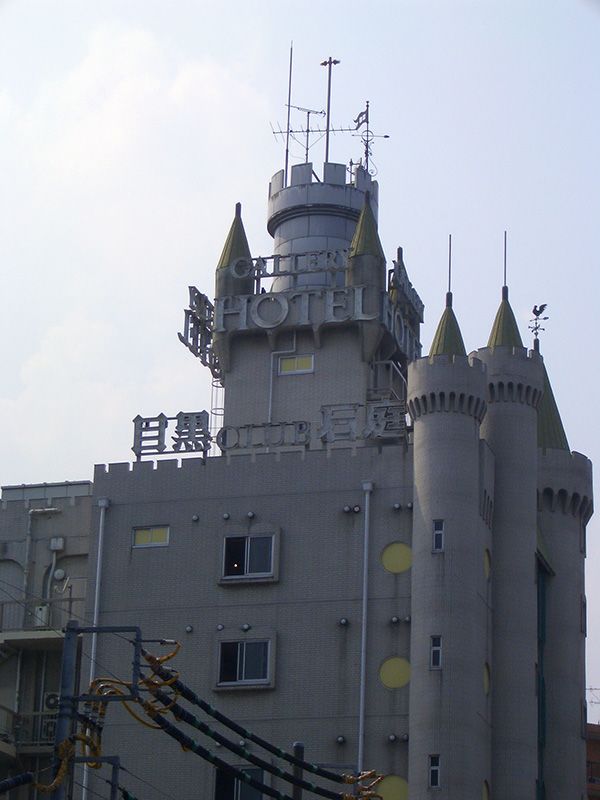 A view of the Meguro Emperor, the first of many love hotels to adopt a castle-shape design. (Photo courtesy of Kim Ikkyon.)

The first of these new hotels opened in the Meguro district of Tokyo in 1973. The hotel, named Meguro Emperor, quickly captured the public’s attention thanks in part to its rather bizarre design, modeled after a European castle.

Kim points out that it was impossible to openly advertise the hotels since they were mainly intended for sexual encounters. This meant that the exterior of the building itself had to serve as a sort of advertisement. It had to be clear at a glance that the building was a love hotel. Quite a few establishments tried to cash in on the success of the Meguro Emperor hotel by adopting similar castle-like designs, and over the next ten years or so these citadels sprang up all over Japan.

The Meguro Emperor was racking up monthly sales of ¥40 million at the time. This added momentum to a shift that was already underway toward hotels going the deluxe route. Love hotels began to feature brash neon signs and fanciful designs that resembled everything under the sun, not only castles but even churches or cruise ships. The interiors were no less extraordinary. Those venturing inside might come face to face with a jungle environment, English scenery, or some palatial spread.

On top of this there were all sorts of unusual gadgets and amenities for hotel guests to use, whether a vibrating bed, “human washing machine,” planetarium, gondola, or a play swing. Every effort was made, in this way, to provide guests with an out-of-the-ordinary experience.

This was the heyday of love hotels. But when the economy slowed down in later years the hotels underwent a major transformation. (Continued in part two.)

The Shanty Akasaka hotel that opened in 1973, the same year as the Meguro Emperor. Although the design is flashy, the entrance is discreet.

(Originally written in Japanese; photograph in banner by Hans Sautter.)