Japan’s rich abundance of deciduous tree species makes autumn a special time of year. As the season deepens, hills and valleys along with shrines, parks, and gardens in urban areas burst into stunning shades of yellow, orange, and red. Old-growth trees, known as kyoju, also join the colorful display. The most representative varieties are ichō, or ginkgo, cherry, and katsura, although the latter prefer to hide deep in forests away from the prying eyes of people.

Enjoying kōyō, or autumn foliage, does not require trekking to the hills, though. Public venues including parks, shrines, and roadways also offer prime areas for taking in the seasonal colors. Places such as Tokyo’s sprawling Meiji Jingū Gaien and Osaka’s lengthy Midōsuji road come alive with people admiring the leaves, lending a distinct excitement to the fall air. Below we visit three ancient giants at the height of autumn. 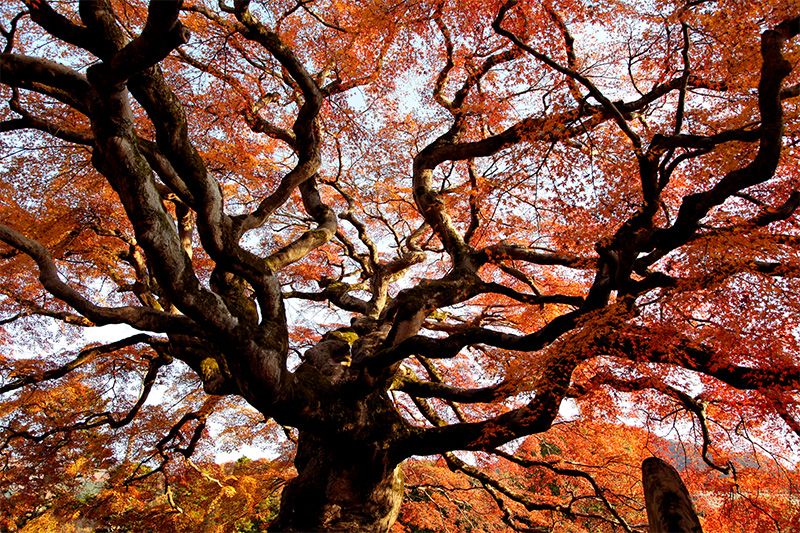 This venerable kyoju stands within the confines of Saizenji, the eighth stop on a pilgrimage of 34 temples dedicated to the Buddhist goddess of mercy Kannon that winds through the mountainous Chichibu region in Saitama Prefecture. It is one of the largest species of maple in Japan, boasting a sprawling crown 56.3 meters in circumference.

The tree presents visitors with pleasingly different forms as the seasons progress, first covering its bare limbs in fresh green foliage of early spring and then trading this for darker summer colors. By mid-November, though, its once verdant leaves have turned brilliant autumn hues, a sight that draws thousands of admirers each year. People making the trip will also be pleased to find the surrounding hills ablaze in fall colors, forming a pleasing backdrop for Saizenji’s famous maple.

After admiring the leaves, visitors, especially those getting along in years, may also want to pay their respects at the main hall of the temple where three statues of Bodhisattva thought to ward off senility are enshrined. Another attraction of Saizenji is its abundance of flowering plants, a characteristic that has made it a favorite destination of blossom lovers as well. 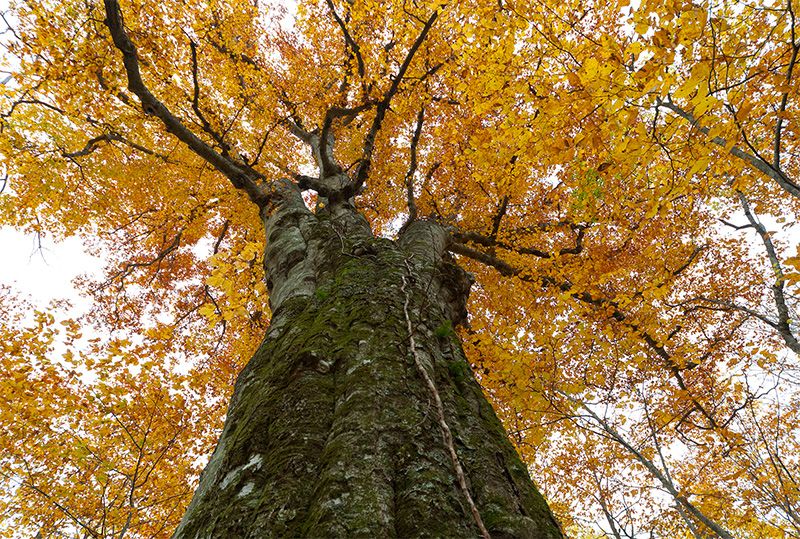 A colleague of mine discovered this towering Japanese beech hiding in the Oirase Valley north of Lake Towada in Aomori Prefecture. It was unexpected to find such an impressive specimen outside the UNESCO World Heritage Shirakami mountains to the west, an area famed for its beech forests. The tree was officially recognized as a kyoju in 2007. When I first visited the plant I was impressed by its height and lithe, graceful trunk. Its bole is only 6 meters in circumference, slender compared to other old-growth trees, but is a record for the species.

The tree, its three main branches reaching skyward, stands alone in the woods like a forest deity, loggers long ago having cleared the surrounding hills of other beech. Three is considered sacred in Shintōism and according to a local belief trees like the towering kyoju that sport three branches are thought to house kami, or gods, and are left standing. This aura of sacredness was made even stronger when I visited the tree at the peak of autumn, its crown of yellow foliage ablaze in the morning sun.

Equally awe inspiring is that the tree is in nearly perfect form. Despite its advanced age and the area’s harsh winters marked by heavy snowfalls, it has developed no scars or hollows. Such a venerable specimen will almost certainly become a local tourist attraction. However, when visiting people should keep in mind that they are entering deep into bear country and should take appropriate precautions. 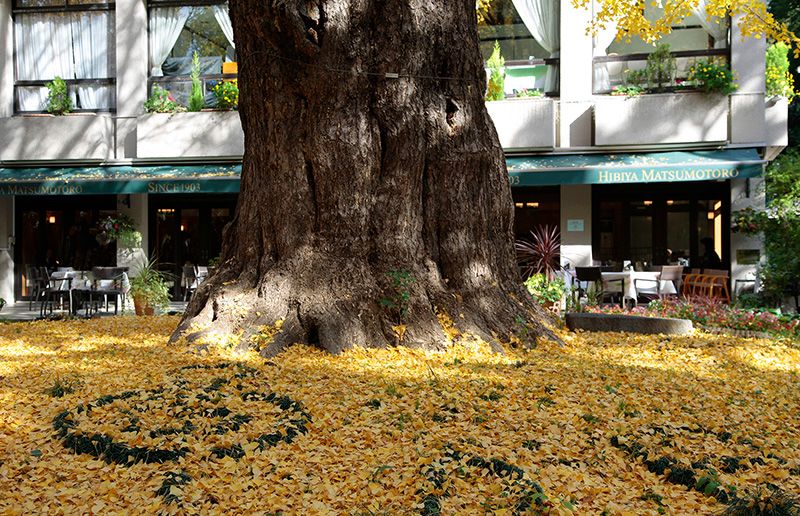 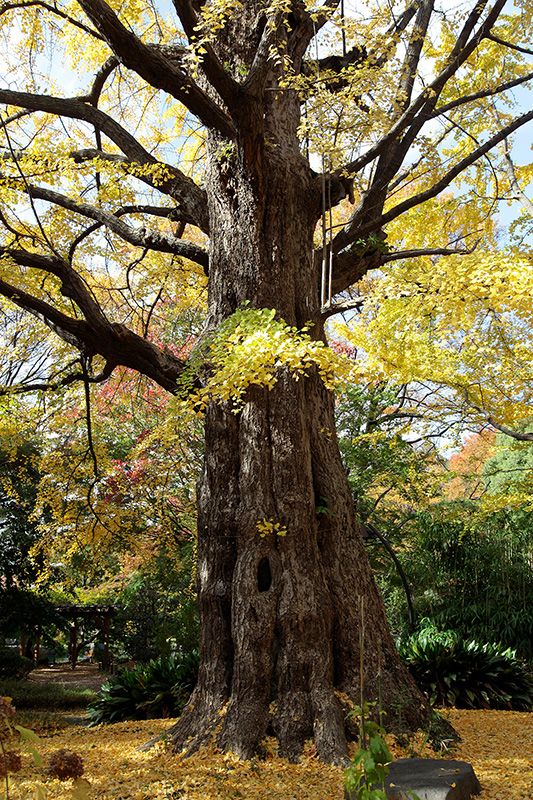 The heart of Tokyo may seem an unusual location to find an old-growth tree, but this stout ginkgo stands in Hibiya Park just a stone’s throw from corporate and central government offices and the Imperial Palace. Known as the kubikake ichō, it towers in front of Matsumotorō, a historical restaurant in the center of the park. The tree is impressive in any season, but come autumn it treats visitors to the park and diners on the eatery’s terrace to stunning views of its golden foliage.

There is an interesting story behind how the tree came to be where it is. In 1901, it was scheduled to be felled as part of road expansion plans in the capital, but botanist and Hibiya Park designer Honda Seiroku stepped in to save it. Putting his career on the line—this is expressed in the kubikake of the tree’s name—he had the ginkgo moved from its original home, now a busy intersection adjacent to the park, to its present location, a journey of roughly 450 meters.

Over the subsequent years the tree, apparently unaffected by the change of surroundings or the urban noise and air pollution, has flourished, growing taller and more robust. This indomitability in the face of the self-serving motives of humans is part of the kubikake ichō’s appeal. In recent years, it has gained a reputation as a “power spot” and has seen an uptick in people coming to bask in its aura.

(Originally published in Japanese on October 22, 2016. Photos and text by Takahashi Hiroshi.)