Kōyō (autumn foliage) is one of Japan’s most famous seasonal spectacles. As fall deepens, the lush forests covering the country’s mountainous landscape slowly transform, taking on spectacular red, orange, and yellow hues. Japan is purported by many to lead the world in deciduous splendor, boasting 26 species of trees famed for their autumn colors. Parks and green spaces also provide alluring autumnal tints, drawing enthusiasts of every age. Whether painted a single shade or interspersed and dappled with contrasting tones, kōyō presents spectacular scenes of natural beauty. 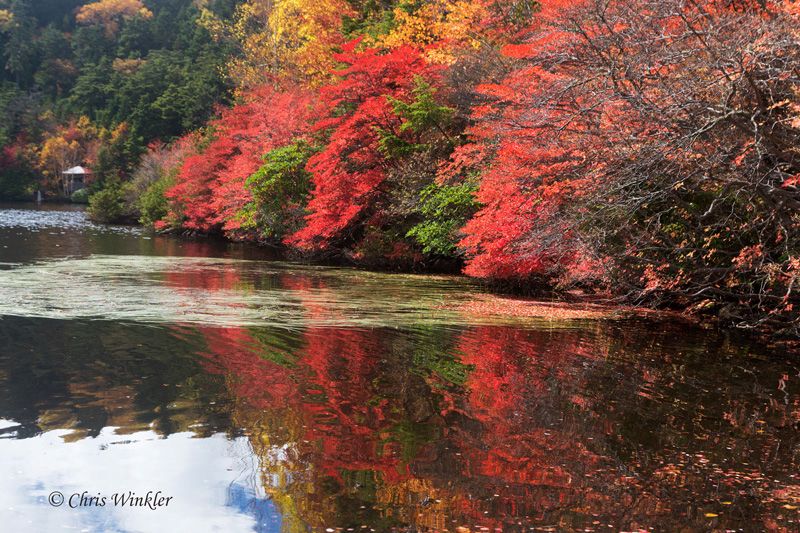 The brilliant autumn red of momiji, or Japanese maple, is most representative of kōyō. The association is so strong, in fact, that the two words are written with the same Chinese characters 紅葉, meaning “red” and “leaf,” respectively. Japan boasts several species of native maple, each with distinct autumn characteristics. Among them is the much-lauded iroha momiji, whose intricate leaves are said to resemble the delicate hands of a baby. The tree’s vibrant crimson foliage is considered to be the most recognizable symbol of autumn.

Countless poems have been composed praising the beauty of the autumn leaves, with waka poets having relied on momiji as a kigo (season word) since ancient times. Adoration for the leaves of the Japanese maple is found in a famous haiku by the Zen priest and poet Ryōkan:

Showing its back
showing its front—
falling maple leaf 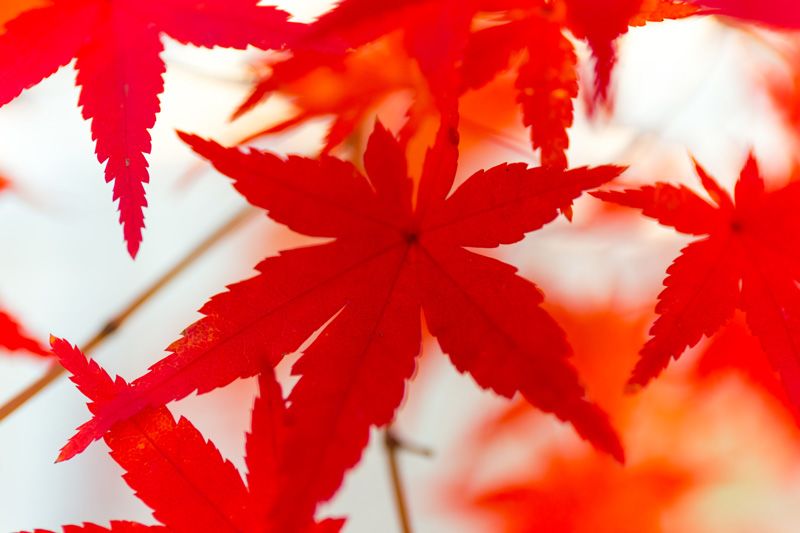 Leaves of an iroha momiji.

Maples as a species are widely dispersed, but the small Japanese maple varieties are native only to China, Japan, and the Korean Peninsula, making them botanical treasures. Along with momiji, ichō (ginkgoes) exemplify the beauty of the season, displaying regal, golden foliage contrasting the scarlet of the maple. 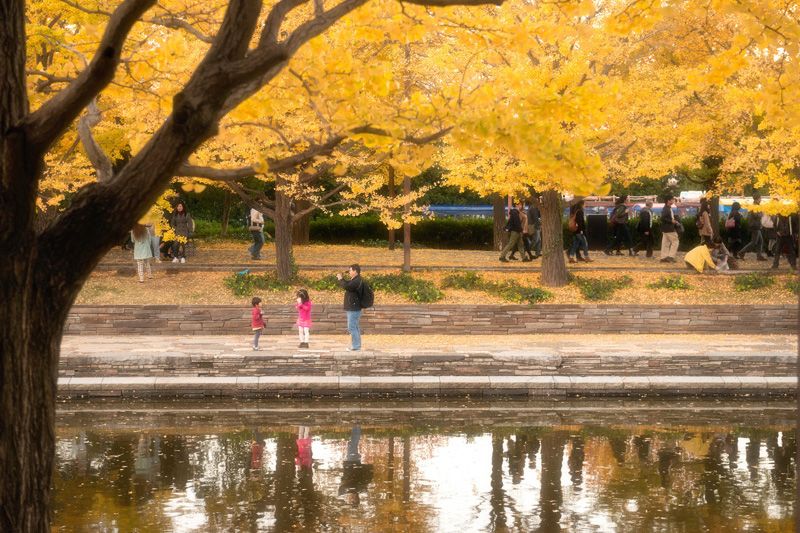 Similar to the crowds that gather for hanami (flower viewing) in spring, many people take part in the pastime of enjoying the autumn foliage, called momijigari. It is a lucrative season for the travel and tourism industry, and as fall approaches agencies advertise tours to popular foliage-viewing destinations.

The kōyō season begins on the northern island of Hokkaidō in September, when the leaves on Mount Taisetsu and other peaks begin to change color, before slowly meandering down the length of Japan. People wanting to follow its progress can refer to the kōyō zensen (autumn foliage front). Much like the spring sakura zensen (cherry blossom front), it provides a forecast of when leaves will be at their most beautiful.

Kōyō lasts around a month following onset, with leaves reaching their pinnacle of color about 20 to 25 days after they begin to turn. Hokkaidō and the Tōhoku region achieve peak brilliance around October, while viewing season in Kantō and Kyūshū stretches from November to the beginning of December. Temperature variations at different altitudes, especially at night and in the early morning hours, produce seasonal variations, with kōyō arriving at mountainous areas earlier than in lower regions. 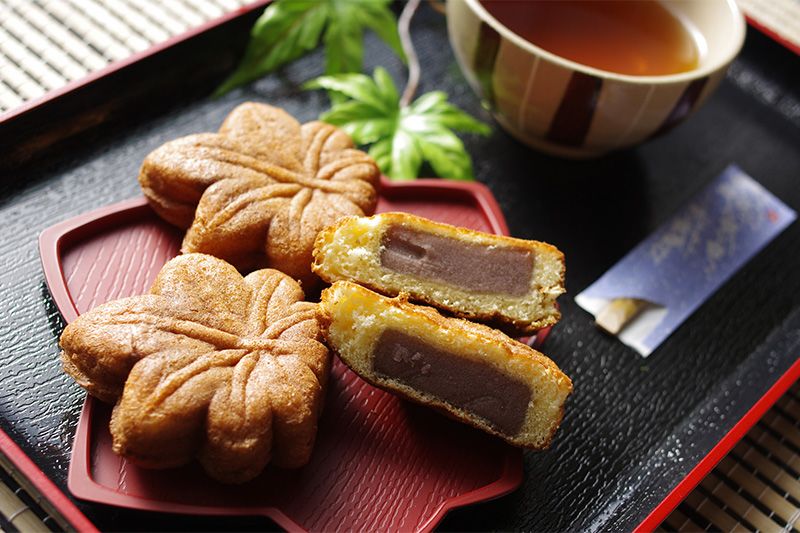 In the world of cuisine, momiji lends its name to a large number of famous dishes and seasonings. Daikon radish grated with dried red pepper or carrot, a concoction called momiji oroshi, is an essential condiment for nabe (hot pot). Other examples include the venison-based momiji nabe, maple leaf tempura, a sweet and sour dish of boiled chicken feet christened momiji for its resemblance to the plant’s splayed leaves, and the well-known leaf-shaped sweet momiji manjū from Hiroshima.

Autumn leaves can be enjoyed throughout Japan, but some of the country’s best-known kōyō spots include Oirase in Aomori Prefecture and Nikkō in Tochigi Prefecture as well as numerous temples in Kyoto and Kamakura. Some of the most visited sites, such as Kyoto’s Arashiyama and Kōdaiji, even offer lighted night viewing. The Japan Travel and Tourism Association provides information on hundreds of kōyō spots around the country, including a list of the 100 of the most famous places for autumn leaves.