Do I Dare to Eat a Peach? Behind Japan’s Freakish Fruit Prices

Society Culture Lifestyle Sep 9, 2016
Tourists often marvel at the beauty, size, and uniformity of Japanese fruit, but they are even more astounded at its price—as much as $200 for a muskmelon at an upscale urban fruit parlor. We provide a snapshot of this unique retail market, along with a brief look at some of the cultural and economic factors that have nourished it.

Shopping at one of Japan’s specialty fruit shops is an eye-opening experience for the first-time visitor. Instead of disorderly piles of produce sold by weight or volume, one encounters carefully displayed boxes containing four apples or a single melon individually wrapped and cushioned. Some high-end fruit parlors and department stores feature such curiosities as triangular or heart-shaped watermelons.

Tourists frequently marvel at the beauty, size, and shape of Japanese fruit, but they are even more astonished by its price. Why, people ask again and again, is Japanese fruit so expensive? To answer that question, let’s begin at the top, at one of Japan’s most distinguished purveyors of fancy fruit.

A Jewel Box of a Fruit Market

The interior of the flagship Sembikiya store in Nihonbashi offers a welcome refuge from the blistering asphalt of central Tokyo on a summer afternoon. With its elegant displays of colorful wares in softly lit glass cases, the emporium looks less like a fruit market than a jewelry store—and its prices reinforce that impression. Jade-green muskmelons run between ¥14,000 and ¥21,600 a piece (roughly $140–$215 at current exchange rates). A single bunch of Seto Giant grapes, sparkling like emeralds, is priced at ¥12,960. (All prices in this article include Japan’s consumption tax.)

Founded 182 years ago, Sembikiya specializes in deluxe gift boxes and baskets, which account for 98% of its sales. Fruit destined for gift giving at this level must be perfectly ripe, delicious, and flawless in appearance. 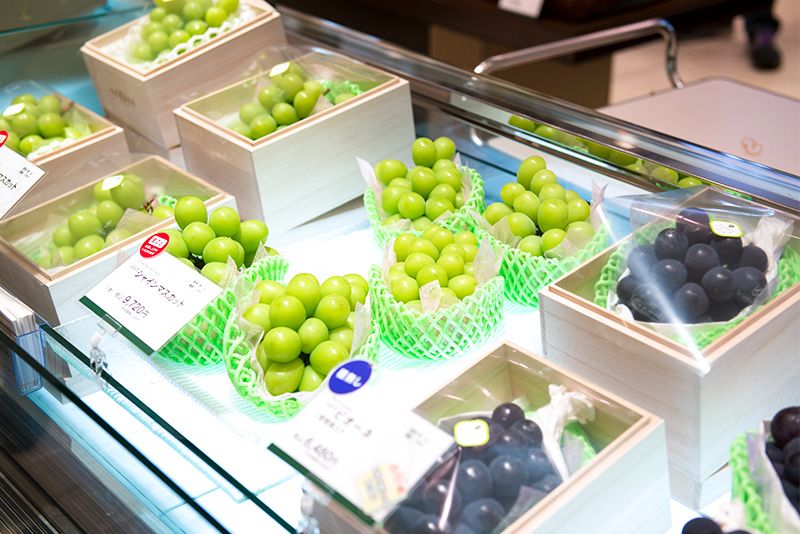 Sembikiya’s large, perfect grapes are not fare for your typical lunch box.

Japanese government offices, construction companies, trading companies, and banks are some of Sembikiya’s most reliable customers. It also counts among its clientele a certain Middle Eastern customer of means, who, since receiving a muskmelon as a gift from a Japanese associate, has been visiting Japan in a private jet every month to stock up on whatever fruit is in season. “Japanese fruit is unquestionably the best in the world in terms of quality and taste,” proclaims Ōshima Ushio, head of planning and development at Sembikiya.

British lawyer Nazar Mohammad seemed duly impressed when he dropped by the shop to have a look around. “Sure, it’s expensive,” he said, “but I’ve never seen grapes like this, with such large, perfectly uniform fruit. I think I’ll stop back later and buy a bunch to try them myself.”

On the other hand, the attorney could scarcely conceal his shock at the store’s ¥3,780 peaches. “Even at [luxury department store] Harrods in London, they would never charge more than 5 pounds [about ¥650] for a peach! At the wholesale market, you could get 30 for this price.” 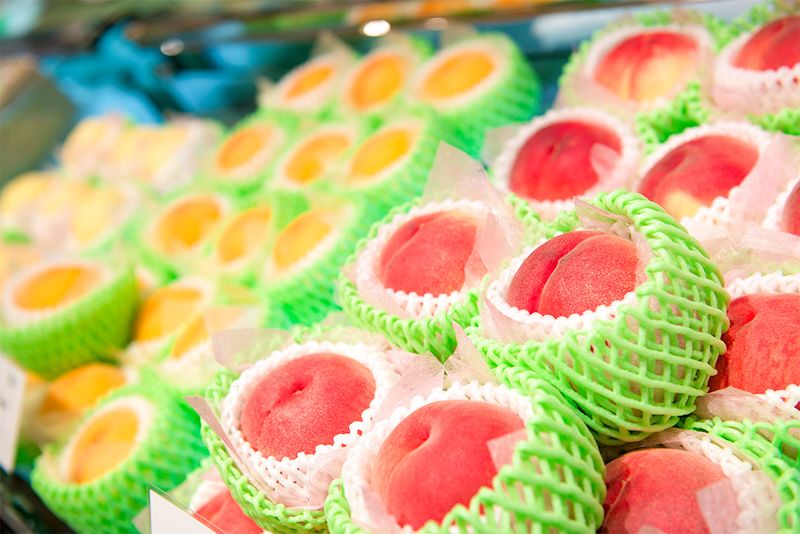 Sembikiya caters to the high end of Japan’s premium fruit market. Fruit House Yoshidaya, located about one hour south of Tokyo by train, targets a wider range of consumers, offering fruit for household consumption alongside deluxe gift baskets. “Sembikiya’s produce comes from the Tokyo Metropolitan Central Wholesale Market, just like ours,” says Yoshidaya proprietor Hashimoto Yoshihei. “But they have a different approach to purchasing. We inspect the cases on display at the wholesale market and choose one that looks good to us. They get the wholesaler to make up a case just for them using the best fruit selected from about 30 regular cases.”

The Japanese have a long history of treating fruit as a luxury. In the tradition of kaiseki cuisine, which developed in conjunction with the tea ceremony, it was categorized as a confection and referred to as mizugashi (literally, “water confection”). Asian pears, grapes, and persimmons were particularly valued for their sweet flesh and perfume. The custom of sending premium fruit as a seasonal gift—particularly the year-end seibo and the summer chūgen—took hold during the early years of the Edo period (1603–1867).

Up until the end of the 1950s, Japanese consumers looked on fruit as something reserved for special occasions. From the 1960s on, as incomes rose and eating habits came under Western influence, Japanese families began incorporating more fruit into their diet. Even so, Japan’s per capita intake of fruit was only 50.9 kilograms in 2011, as compared with 116.1 kg in France and 149.0 kg in Italy (according to estimates by the Ministry of Agriculture, Forestry, and Fisheries).

Researcher Sasaki Shigeyuki of Takasago International provides some historical context for this gap, explaining that in early times, relatively few Europeans had access to good drinking water or nutritious crops year round, so they relied on fruit as an important source of water, vitamins, and minerals (Takasago Times, 2008). By contrast, Japan, with its moist, humid climate, had an abundance of water suitable for drinking. This contributed to the tendency to treat cultivated fruit as a luxury. Higashino Akihiro of the Marketing and Processing Industries Office at the Japanese Ministry of Agriculture, Forestry, and Fisheries concurs that “there’s a very different cultural attitude toward fruit in Europe, where they have no tradition of giving fruit as a gift.”

The scale of farm and orchard operations is an important factor in the equation, according to Higashino. In Europe, monoculture is the dominant trend, with relatively large farms focusing on intensive cultivation of a particular fruit crop. In France today, the average plot is about 29 hectares (as of 2010), and an increasing number exceed 100 hectares. Many of these growers supply the ingredients for wine, jam, dried fruit, and other preserved foods, making the fruit’s outward appearance largely irrelevant.

In Japan, growers have had to adapt to different topographical as well as cultural conditions. With almost 80% of the long, narrow Japanese archipelago covered by mountains, large tracts of arable land are harder to come by. In 2010, the average Japanese farm was only 2.2 hectares, and 85% of fruit farms were 2.0 hectares or smaller. Fruit cultivation is labor-intensive, since much of the work must be done manually, and such processes as pruning require considerable skill.

Many of Japan’s small, family-operated farms have found that the only way to make fruit cultivation economically worthwhile is to target the high-value-added gift market, choosing the premium varieties and taking extra care in their cultivation. Muskmelon growers, for example, strive to maximize the fragrance of their fruit by culling all but one melon from each plant. 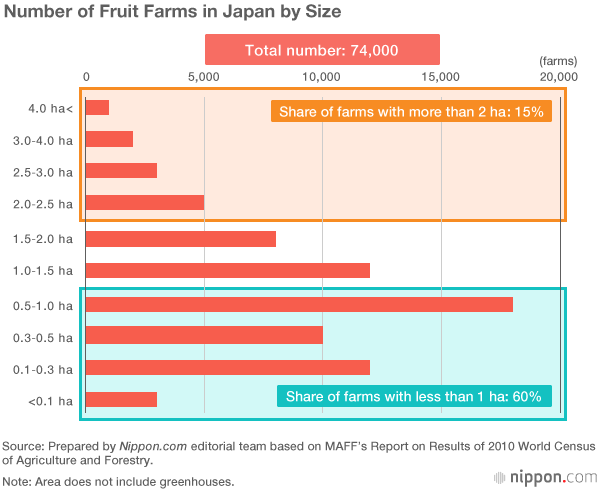 The fruits of these labors have begun to find favor as luxury goods overseas as well as domestically. The sale value of Japanese exports of premium apples, Asian pears, peaches, strawberries, grapes, and persimmons has more than doubled over the past decade, reaching ¥18 billion in 2015, according to MAFF’s Higashino.

Of course, not everyone is happy about the way Japan’s fruit industry has evolved. Many Japanese consumers say they would gladly put up with smaller, irregular fruit if it meant they could buy it more cheaply. 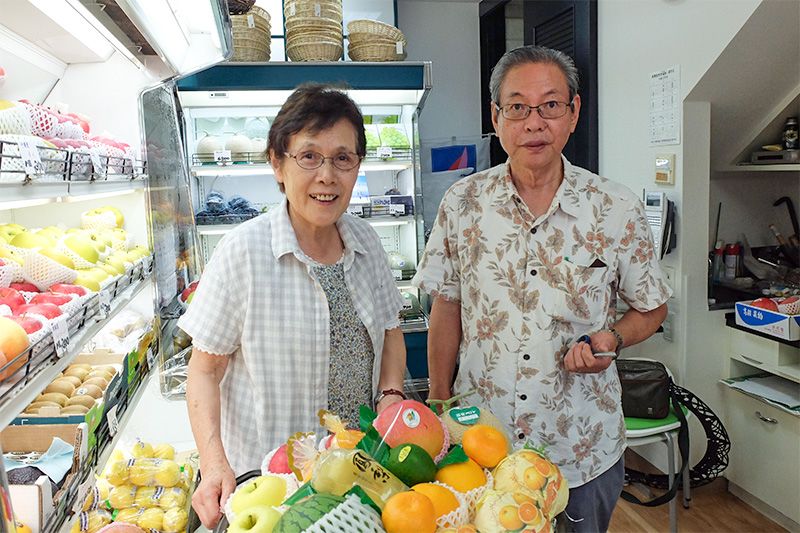 The Hashimotos show off a fancy fruit basket at Fruit House Yoshidaya, which has been operating for over 100 years.

At Yoshidaya, Fuji apples were recently priced at six for ¥850, while oranges were five for ¥600. But even at these relatively low prices, Japanese consumers have a tendency to treat fruit as a dessert item, as opposed to a casual snack food. “Quite a few of our customers like to come in and purchase a single piece of fruit for ¥200 or ¥300,” says Hashimoto, “the way they might buy an individual pastry.”

Evolving attitudes could gradually open the way to cheaper fruit for daily consumption. But as American humorist Dave Barry noted in his 1993 book Dave Barry Does Japan, people who buy melons at shops like Sembikiya or department stores are not on the lookout for bargains.

“The Japanese are very big on giving gifts,” he writes, “and the idea with the melon is, the recipient will appreciate it, because he or she knows how much it cost. However, when you give a gift in Japan, etiquette requires you to disparage it. . . . This is of course exactly the opposite of how we Americans would handle the giving of a $75 melon. If we gave somebody such a melon, the instant he unwrapped it, we’d be prodding him with our forefinger and saying, ‘Do you have any idea how much that melon cost?'”

In the end, culture may well be the biggest factor sustaining Japan’s outlandish fruit prices.

(Originally written in Japanese  and published on August 24, 2016. Banner photo: An employee displays a premium muskmelon in a fine paulownia-wood box at Sembikiya’s main store in Nihonbashi. All photographs by Kodera Kei.)