Society Jan 8, 2016
2015 marks the tenth anniversary of the idol group AKB48. The group has maintained its popularity by staying ahead of trends. But the rapidly changing music industry could make the upcoming years more challenging.

AKB48’s CD Sales on the Wane

The AKB48 song “365 Days of Paper Airplanes” has served as the theme music of public broadcaster NHK’s morning TV drama Asa ga kita (Morning Has Come) since the program went on the air in fall 2015. The show has been a hit, with an average viewership of 25%. AKB48 capitalized on the extra attention the show has provided, releasing a new CD single titled “Kuchibiru ni Be My Baby” (On My Lips Be My Baby) on December 8, 2015.

With this latest hit, AKB48 has had 29 straight CD singles reach number-one on the Oricon CD chart, a weekly ranking on music information provider Oricon’s website. The group’s cumulative sales have now exceeded 36 million CDs, surpassing the previous record holders, the rock band B’z. In addition, the lyricist for the group, Akimoto Yasushi, has a track record of over 100 million CDs sold for songs he has penned for AKB48 and other groups.

The most recent CD single sold 810,000 copies on its initial release. This would be an impressive figure for any other group, but for AKB48, it is the lowest result for a single release in the past five years. 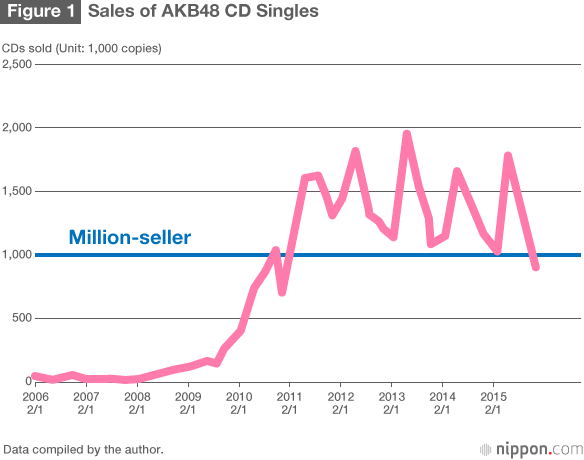 Despite the lower figures, AKB48 remains the only Japanese group capable of selling over 800,000 copies of a single. In fact, every CD single the group issued over the past five years has sold over a million copies within a week of release, which is a testament to the group’s preeminence in Japan.

Still, the inability of AKB48 to maintain its string of million-copy sellers suggests that change is emerging. Ironically, the group’s tenth anniversary coincides with a tectonic shift for Japan’s music industry, which I want to examine by considering the case of AKB48.

Many people think that the music itself cannot account for AKB48’s string of million-selling singles. Instead, they say that the group’s so-called “handshake events,” where fans can meet and shake hands with group members, is a major factor behind CD sales. Fans purchasing a CD with an event ticket have the opportunity to shake hands with their favorite AKB member. Typically, each ticket provides around 10 seconds of interaction, but fans looking to spend more time with their favorite member might purchase dozens of singles, extending their time by a proportional amount. This sort of “pay-to-greet” system has drawn comparison to the kyabakura bars in Japan, where people pay hefty fees for a chance to have a few drinks with a beautiful hostess.

AKB48 is not the only group to link CD sales to handshake events, however. Other idol groups hold similar events, such as where fans can pose for a photo with a favorite member or even get a hug. Still, these groups are not selling anywhere near as many singles as AKB48.

Along with its handshake events, AKB48 has captured attention and won over fans in various other ways, including its “general election” where members are ranked by popularity and assigned positions within the group accordingly, and the group’s dating ban. These have paid off with eager fans frequenting handshake events, which helps boost CD sales.

AKB48’s anniversary means that fans from the early days of the group are also 10 years older. Many expect these long-time fans to take an interest in spin-off groups, like NMB48 or HKT48, but others think their interest in idol groups will dwindle as they get older.

Moreover, the approaches that garnered attention for AKB48, like the general election or ban on dating, have lost their appeal as they become routine.

Even though the group’s recent CD includes the theme song for one of the most popular NHK morning TV dramas in recent years, it was not able to break the one-million mark in sales. Several factors seem to account for this disappointing result.

The Failed Battle Against Music Copying

In 2002, just a couple years before AKB48’s debut, there was uproar over the so-called copy control CD format introduced by the music industry. The CCCD technology prevents the “ripping” of audio data on a PC by intentionally imbedding error codes that are read by a PC but not a CD player, ensuring that only audio players could be used to listen to CDs.

The introduction of the CCCD format was a response by executives at major record labels to the decline in CD sales, which they attributed to consumers pirating music to share with friends or distribute for free over the Internet.

Even though downloading pirated files is illegal, it proved nearly impossible to prevent. For record labels targeting a youth sector with little disposable income, however, figuring out how to prevent CD ripping and file sharing was a matter of life or death.

The CCCD format was ultimately unsuccessful and ended up creating more problems than it solved. As the discs were not standard CDs, they sometimes would not play properly on audio systems. In addition, people soon devised methods to circumvent the format’s barriers, and the CCCD format was eventually abandoned.

Around the same time, Apple launched iPod and iTunes, marking the beginning of full-fledged sales of downloadable content. In 2004, Sony also introduced its Japanese online store mora. The hope was that the new download sales would be significant enough to make up for the decline in sales of actual music CDs and DVDs. 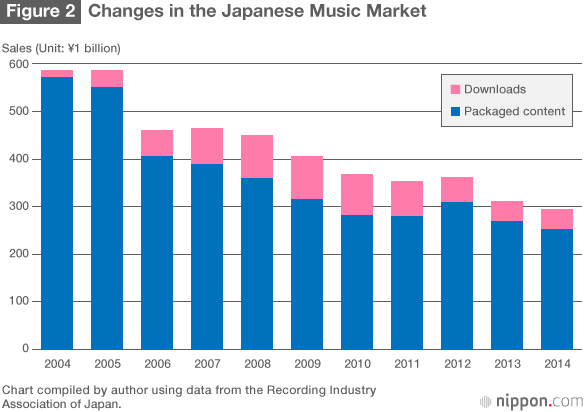 As the figure above illustrates, sales of downloadable content was not enough to offset the falling sales of packaged content.

On top of this, the new format of fixed-price streaming services like Spotify emerged to compete with the sale of downloaded files. For those services, users pay a monthly fee that provides the right to listen to as much audio content as they like.

Similar services have become available in Japan, such as LINE Music and AWA. Since the copyright holders only receive a fraction of the monthly fees collected, the revenue earned from such services by record labels and artists can be even smaller than downloaded files.

The development of these technologies, which spans the 10-year history of AKB48, has wrought significant change in the music industry. The group has been keenly aware of the situation and managed to survive and thrive during this period by transitioning toward a business model centered on live events. This strategy has paid off, as seen in the group’s five-year streak of explosive CD sales.

One weakness of such a business model, however, is that seating capacity at venues puts a cap on sales capacity. But AKB48 managed to raise the limit by increasing the amount each individual could pay for attending a handshake event. Another factor is the now common practice of using smartphones to purchase products, with live venues taking advantage of this method to enable attendees to buy merchandise even when inventories at events sell out.

The innovative new live viewing technology has also been used to expand the capacity of live events.

Over the past few years the film industry has been working to improve and diffuse technology for transmitting digital video images. Many movie theaters are now equipped with digital film projectors that are capable of nearly real-time transmission of various video content from the Internet or communication satellites.

This technology has made live viewing feasible, with a greater number of transmissions each year, such as a concert at Saitama Super Arena near Tokyo being broadcast live in Fukuoka. This has allowed performers to bypass limitations in seating capacity at venues, with attendance now ultimately determined by the number of movie theater seats around Japan.

I mentioned the example of a concert in a large, metropolitan venue, but the opposite case is also possible. A situation where a concert in a provincial part of Japan being broadcast live in major urban areas would make it possible to attract more attendees, boosting revenue above what would normally be possible for an event in smaller city.

These technological developments are occurring at a moment when venue capacity has been falling drastically in Japan. This situation, dubbed the “2016 problem,” is occurring as a result of the run-up to the 2020 Tokyo Olympics, which has led to many venues to close for remodeling.

Given this situation, many expect live video transmission of events in regional cities to become a significant business. Even though AKB48 has focused its business model on live events, including live broadcast of concerts, the group will be unable to overcome the 2016 problem solely through broadcasts at movie theaters, as the format does not contribute to increased CD sales by giving audience members the option to interact with group members.

AKB48 faces a host of challenges, including the group’s aging fan base, the decreasing novelty of its mainstay approaches, and falling venue capacity. Followers of the group, however, look forward to seeing how the group will respond to these challenges as it sets course for the next 10 years.