Society Dec 1, 2016
Kamitteru, or “godlike,” topped this year’s finalists to be recognized as the word of the year for 2016. Other selections in the 10-strong finalist pool shed light on the economy, current events, and celebrity romances and scandals that left an impact on Japanese news-watchers—and their vocabularies—over the past year.

On November 18 we brought you “The Words of 2016,” a list of the 30 terms selected by Jiyū Kokumin Sha as representative of the Japanese zeitgeist during the past year. Today the 10 finalists were announced from among those nominees, along with one winner: kamitteru (神ってる), a slangish way to say “godlike” that became popular after Hiroshima Carp manager Ogata Kōichi borrowed it from youth culture (he learned it from his children) to describe outfielder Suzuki Seiya’s riveting performance in the batter’s box. 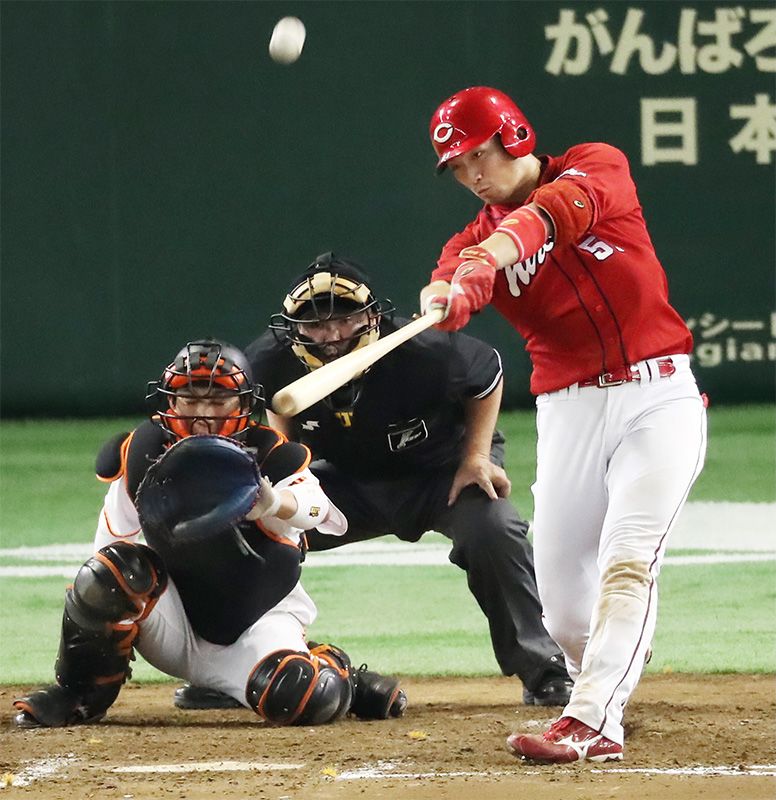 Hiroshima’s Suzuki Seiya hits his second home run in as many at-bats in a September 10 game against the Tokyo Yomiuri Giants. (© Jiji)

Jiyū Kokumin Sha, the publisher of the popular annual reference Gendai yōgo no kiso chishiki (Basic Knowledge on Contemporary Terminology), tracks popular terms that creep into the language over the course of the year. In November a panel of journalists, writers, artists, and others selects a group of nominees from among these new additions, coming together again to make their final picks for the terms that had the most impact on popular culture.

Several members of the selection committee noted that this year’s crop of terms seemed to have less sparkle than standout nominees in previous years. The ad campaign creator Yanai Michihiko wrote: “It’s perhaps because we live in a more complex age now that we see so many words reach us not through our ears, but through our eyes. Many of our nominees this year seemed to be names for products or social phenomena. They make their way into the popular consciousness, but it’s unlikely that we’ll see them become the sort of words on everyone’s lips.” The actress Muroi Shigeru added: “As expected, this year provided plenty of new words for us to review. But when they are lined up with one another, they give an overall sense of the complicated problems that lie behind them.”

The poet Tawara Machi, meanwhile, pointed out the many nominees that shared provenance in a single event: Kimi no na wa (Your Name), the wildly popular anime, and seichi junrei, the tours of real-world locations associated with the movie’s plot. Tokyo Governor Koike Yuriko’s tomin fāsuto promise to “put the people of Tokyo first” and the morido problems that came to light when she went digging for answers to the “layer of soil” that was missing from the new market at Toyosu, meant to replace the beloved but aging Tsukiji facility. “Perhaps,” wrote Tawara, “we’re now in an era when people’s interest is focused more easily on a smaller number of issues inviting passionate response.” And making this possible is social media and other internet tools allowing information to spread among these people in the blink of an eye.

Internet itself made the list of finalists in 1995, noted Gendai yōgo editor in chief Shimizu Hitoshi. “Now, 21 years later, words springing from the culture of the net permeate society with ease.” Shimizu pointed to “PPAP,” known worldwide thanks to the power of Youtube, and “Hoikuen ochita Nihon shine,” the anonymous blog entry whose provocative title made the people of Japan sit up and take notice of real issues their country faces.

Finalists for the Words of 2016

神ってる — Kamitteru. When team manager Ogata Kōichi praised a performance by the Hiroshima Carp’s Suzuki Seiya as “godlike” in June, he is said to have learned the slang term—which sticks the noun kami onto a verb suffix, making it something like “godding”—from his children. It became associated with the Carp in a season when the team won baseball’s Central League pennant for the first time in 25 years. 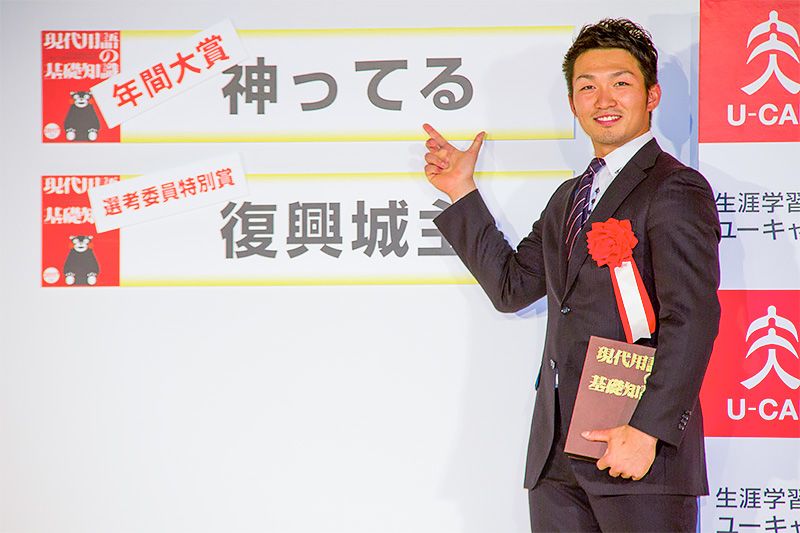 ゲス不倫 — Gesu furin. Several high-profile “sleazy adultery” scandals made the headlines in 2016. TV celebrity Becky’s career suffered after an affair with married rock singer Kawatani Enon came to light. In another big story, Liberal Democratic Party lawmaker Miyazaki Kensuke was exposed as having spent the night with a model while his wife was in the hospital shortly before the birth of their first child. 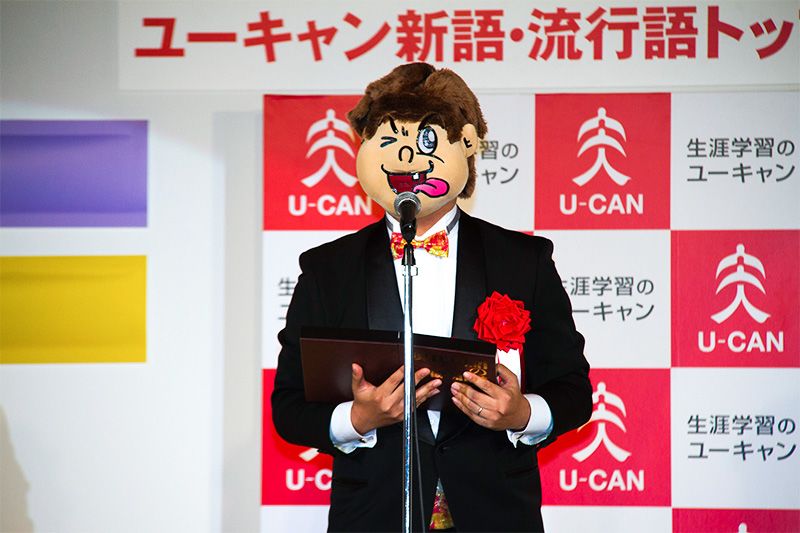 A Shūkan Bunshun (文春) reporter dons a mask of the magazine’s mascot Fumiharu to hide his identity when accepting the award. The publication used stakeouts and other methods to expose several high-profile infidelities.

聖地巡礼 — Seichi junrei. There was a growing trend in the number of fans making “pilgrimages” to locations appearing in such popular media as anime, TV dramas, and computer games. Viewers of NHK’s drama Sanadamaru based on the life of Sanada Yukimura traveled in droves to Ueda, Nagano Prefecture, to visit sites associated with seventeenth-century samurai; meanwhile, the hugely popular animated film Your Name inspired watchers to visit locations in Tokyo and elsewhere that featured in it. 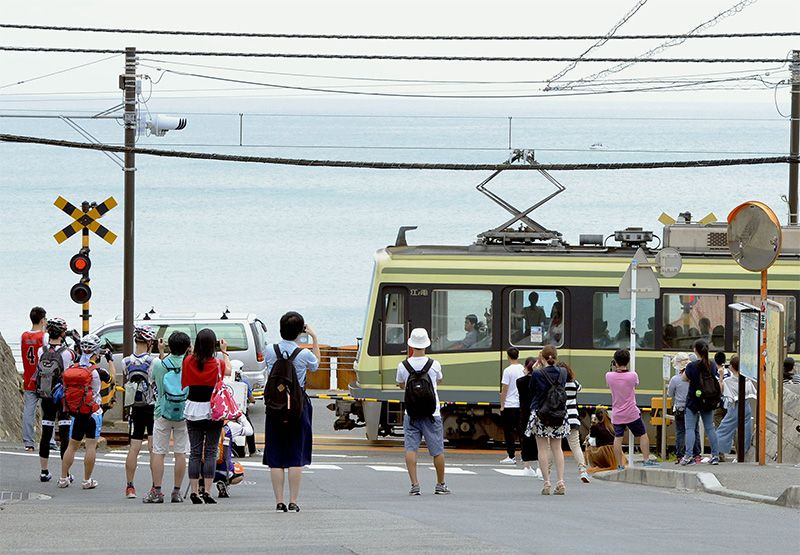 Tourists gather at the track crossing near Kamakura Kōkō Mae station on the Enoshima Electric Railway in Kamakura, Kanagawa. The location became a popular destination after appearing in the manga and anime versions of the basketball-themed Slam Dunk. (© Yomiuri Shimbun/Aflo)

トランプ現象 — Toranpu genshō. As the “Trump phenomenon” swept across the United States, and indeed around the world, people in Japan also watched in amazement as Donald Trump’s strong, divisive rhetoric propelled him past Hillary Clinton to claim a stunning victory in the US presidential election.

PPAP — “Pen Pineapple Apple Pen” was the catchy, if nonsensical, tune appearing in just about everyone’s Youtube browsing history this fall. With singing and dancing by Pikotarō, a character played by the comedian Kosaka Daimaō, the short video racked up tens of millions of plays—enough to land it at number 77 on Billboard’s Hot 100 chart. It was the first song by a Japanese artist to make the list in 26 years and, at just 45 seconds in length, was recognized as the shortest tune ever to appear there.

保育園落ちた日本死ね — Hoikuen ochita Nihon shine. “Couldn’t get my kid into nursery school. Japan can go screw itself.” This was the title for an anonymous blog post that went viral in February, with the author blasting Japanese government and society for asking women to bear children and take part in the workforce without providing the child-care systems to make this possible. “Why are you spending tens of billions of yen on the Olympics? Stop messing around with that emblem and build more nursery schools.” Her words found a receptive audience in a nation weighed down by demographic challenges. 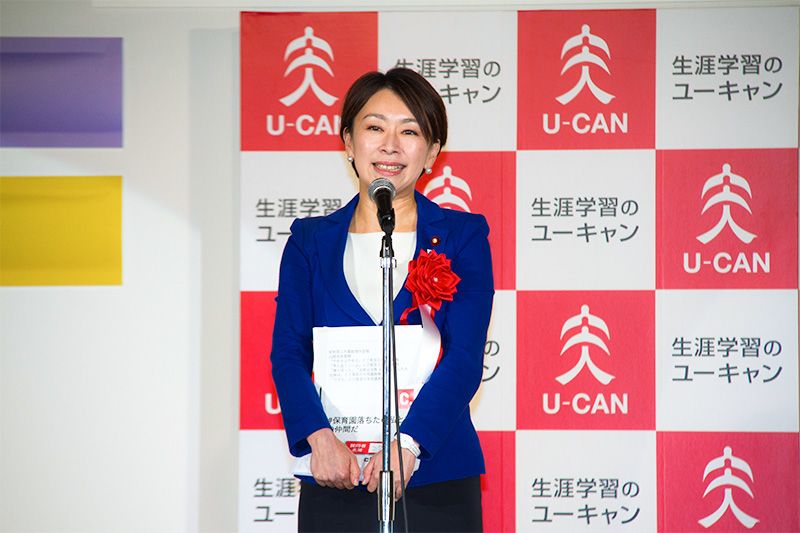 Democratic Party member Yamao Shiori caused a stir when she brought up the blog during a Diet debate. Here she accepts the award on behalf of the anonymous author and 27,000 mothers who signed a petition asking the government to build more daycares.

（僕の）アモーレ — (Boku no) amōre. Japanese soccer star Nagatomo Yūto and actress Taira Airi announced their romance on June 1. In media appearances that followed, the defender for Italian club Inter Milan blushingly admitted, “She’s someone very important to me. My amore. It’s an Italian word for ‘loved one.’” 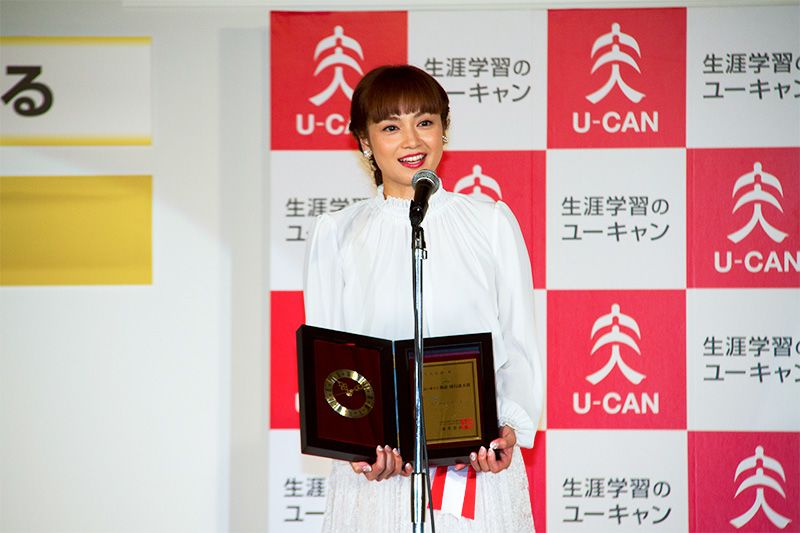 Actress Taira Airi blushed as she talked about her relationship with her superstar boyfriend.

ポケモンGO — Pokémon Go. The mobile game was a global craze this year, particularly in Japan, where it launched in July. Developer Niantic’s placement of virtual Pokémon in real-world locations prompted millions to download the app and head out, smartphone in hand, to “catch ’em all.” Japan was the first market to feature an in-game business tie-up, as McDonald’s Japan registered all of its restaurants as locations in the game.

マイナス金利 — Mainasu kinri. “Negative interest rates” were the latest policy tool brought to bear by the Bank of Japan in January, when it cut the rate offered on new deposits to –0.1%. The central bank has been struggling to meet its stated goal of 2% annual price inflation, and this was an attempt to make it less attractive for financial institutions to park their cash and more attractive to get it cycling through the economy again. Sadly for the BOJ, though, the outcome has not been a marked uptick in lending.

盛り土 — Morido. In August Tokyo Governor Koike postponed the planned relocation of the world-famous fish market from Tsukiji to Toyosu. Thereafter it came to light that this “layer of soil” had not been put down under the foundation of the new site, which formerly hosted a gas refinery that left high levels of chemical contamination in the soil and groundwater. Work is still underway to ascertain the site’s safety and to find out who was responsible for the missing layer of clean soil. 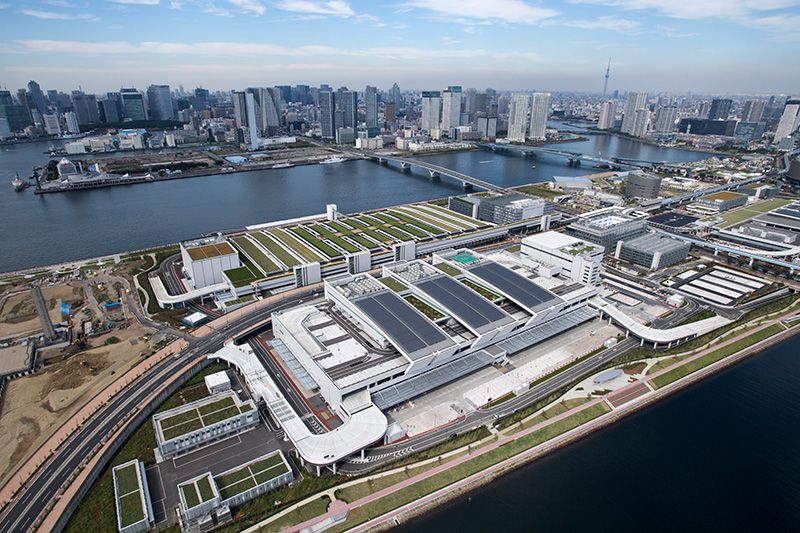 The newly built fish market at Toyosu in Tokyo Bay, photographed on October 12. The planned move to the new facility from the old Tsukiji market has been postponed due to soil contamination and other concerns. (© Jiji) 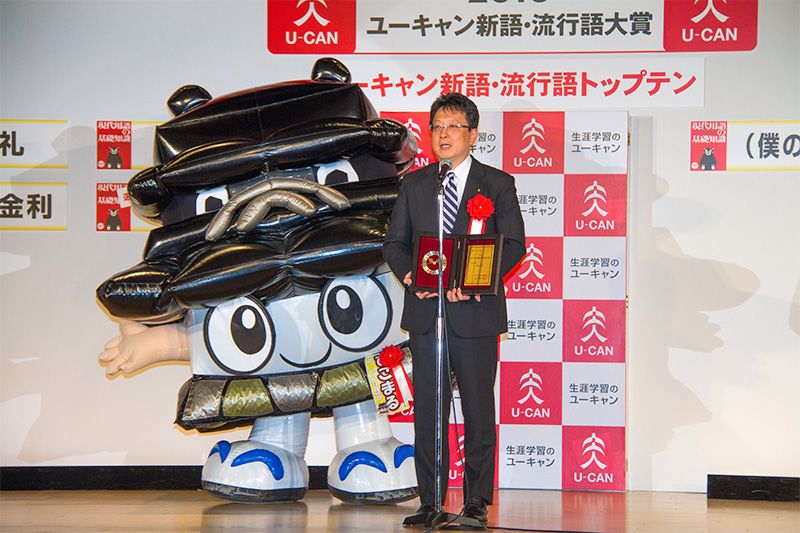 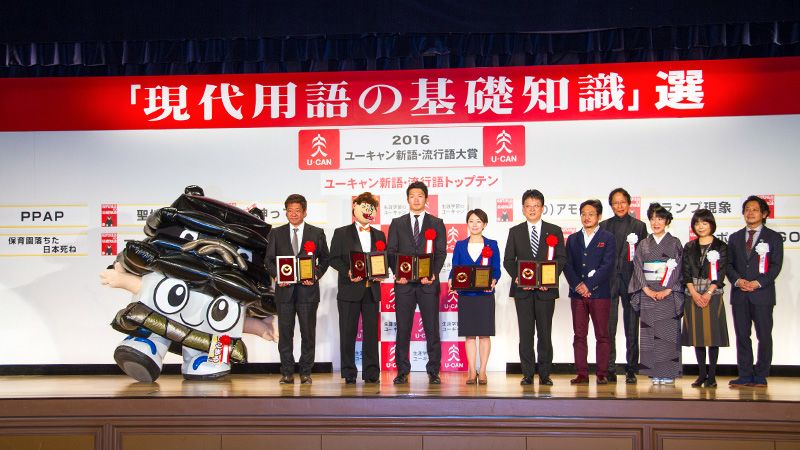 Representatives of the winning words for 2016 and members of the selection committee gather for a final group photo.

(Originally published in English. Banner photo: The Hiroshima Carp pose after winning their first Central League pennant in a quarter-century, thanks to kamitteru performances from their batters. © Jiji.)