Society Culture Nov 18, 2016
Once again, the publisher Jiyū Kokumin Sha has selected the nominees for its “Words of the Year” award. Learn about these 30 terms that help to show how the Japanese saw the year that will soon be finished.

Each year Jiyū Kokumin Sha—publisher of the annual Gendai yōgo no kiso chishiki (Basic Knowledge on Contemporary Terminology), a handy reference work for people who need information on current events and Japanese terms that haven’t made their way into the dictionaries yet—announces a list of the terms that helped to define the year.

On November 17, the company issued a list of 30 terms for 2016, down from 50 in previous years. Covering everything from technology and industry to international affairs, politics, and sports, they are a way to get up to speed on what 2016 has meant to the Japanese people. Below we introduce them all. Be sure to check back after the company announces the finalists on December 1, too!

Nominees for the Words of 2016

アスリートファースト — Asurīto fāsuto. Newly elected Tokyo Governor Koike Yuriko pledged an “athletes-first” approach when constructing facilities for the 2020 Olympic Games to be held in the city. This has been a common refrain since the games were first awarded to Tokyo.

新しい判断 — Atarashii handan. In June 2016, Prime Minister Abe Shinzō made a “new decision” to further delay a planned consumption tax hike from 8% to 10%. Abe had previously postponed the hike, originally scheduled for October 2015, to April 2017; the increase is now slated for October 2019.

歩きスマホ — Aruki-sumaho. The potential dangers of “using a smartphone while walking” came under extra scrutiny this year due to concern over Pokémon Go players more intent on “catching ’em all” than looking where they were going. The nation’s train stations are now decorated with signs warning travelers to keep their eyes up so they won’t take a tumble onto the tracks.

NTT Docomo’s video warning about the dangers of aruki-sumaho.

EU離脱 — EU ridatsu. Brexit—or, more formally, Britain “leaving the European Union”—was big news in Japan as in the rest of the world. Japanese manufacturers like Hitachi and Nissan, which have set up operations in Britain with an eye on accessing the promising European market, are keeping especially close watch on how things develop.

AI — In March, Google demonstrated the potential of artificial intelligence as its AlphaGo program defeated the Korean go grandmaster Lee Sedol in four out of five matches. This was the first time a machine had beaten a top-level human player at go, a game whose complexity long had people claiming computers would not take the crown as they had already in chess.

The DeepMind website offers more information on the AlphaGo project.

おそ松さん — Osomatsu-san. An update of the classic Osomatsu-kun, this anime series featured the title character and his sextuplet brothers as feckless young adults, 10 years older than they were in the original manga and anime. The popular show ran from October 2015 to March 2016.

神ってる — Kamitteru. When team manager Ogata Kōichi praised a performance by the Hiroshima Carp’s Suzuki Seiya as “godlike” in June, he is said to have learned the slang term—which sticks the noun kami onto a verb suffix, making it something like “godding”—from his children. It became associated with the Carp in a season when the team won baseball’s Central League pennant for the first time in 25 years.

君の名は。 — Kimi no na wa. Japan’s biggest film of the year, Your Name signaled the arrival of director Shinkai Makoto as a new force in anime. The tale of body-swapping teens is projected to earn ¥20 billion by the end of 2016.

The English-language trailer for Your Name.

ゲス不倫 — Gesu furin. Several high-profile “sleazy adultery” scandals made the headlines in 2016. TV celebrity Becky’s career suffered after an affair with married rock singer Kawatani Enon came to light. In another big story, Liberal Democratic Party lawmaker Miyazaki Kensuke was exposed as having spent the night with a model while his wife was in the hospital shortly before the birth of their first child.

斎藤さんだぞ — Saitō-san da zo. Comedian Saitō Tsukasa won fans for his confident yet slightly creepy delivery of the catchphrase “I’m Saitō.” He and his partner Takashi, who make up the manzai duo Trendy Angel, broke into the limelight with their self-deprecating style of humor, winning Japanese stand-up comedy’s top prize the M-1 Grand Prix in 2015. Saitō, however, has garnered the lion’s share of attention off the comic stage, making frequent appearances in TV dramas and commercials.

ジカ熱 — Jika netsu. Concern over the effects of Zika fever, including severe brain anomalies in infants such as microcephaly, grew as the disease spread around the globe. Japan saw only a handful of cases of people who had contracted the Zika virus abroad. Athletes and staff heading to the Rio Olympic and Paralympics Games, however, were on high alert as Brazil struggled to control the spread of the disease.

シン・ゴジラ — Shin Gojira. Godzilla returned to the silver screen in Godzilla Resurgence after a 12-year hiatus. It was the first installment in the popular monster series to utilize computer generated graphics instead of Japan’s iconic tokusatsu filming technique, a decision that director Anno Hideaki said was made to provide an extra layer of realism to the film.

The trailer for the lizard's latest outing.

SMAP解散 — SMAP kaisan. Fans were shocked when hugely popular boy band SMAP announced they would disband on December 31, after 28 years together. The news came on the heels of a live television appearance by band members meant to quell earlier rumors that the group was calling it quits. The media has speculated wildly about causes for the breakup, but the SMAP members and their management agency Johnny & Associates have remained tight-lipped.

聖地巡礼 — Seichi junrei. There was a growing trend in the number of fans making “pilgrimages” to locations appearing in such popular media as anime, TV dramas, and computer games. Viewers of NHK’s drama Sanadamaru based on the life of Sanada Yukimura traveled in droves to Ueda, Nagano Prefecture, to visit sites associated with seventeenth-century samurai; meanwhile, the hugely popular animated film Your Name inspired watchers to visit locations in Tokyo and elsewhere that featured in it.

センテンススプリング — Sentensu supuringu. Television talent Becky and rock singer Kawatani Enon used “Sentence Spring,” a direct English rendering of the title of weekly magazine Shūkan Bunshun (文春), along with other coded words after the publication blew the lid off the couple’s affair by publishing excerpts from their correspondence via the Line chat app. 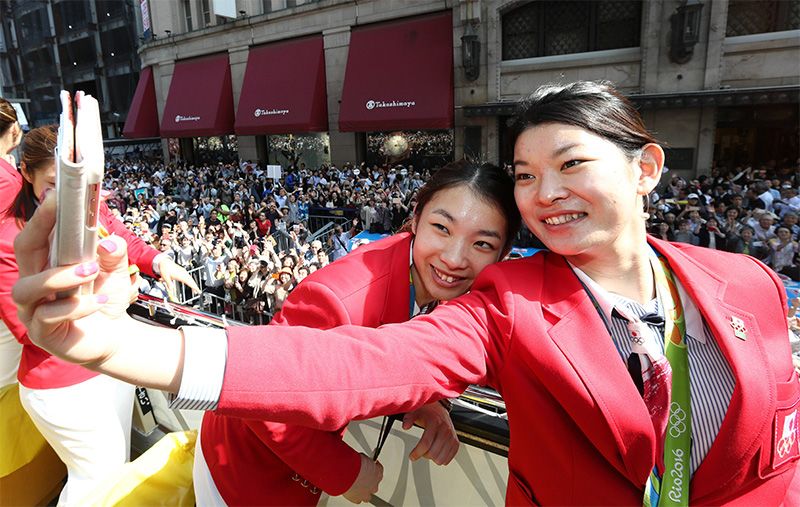 都民ファースト — Tomin fāsuto. Following her election on July 31, Tokyo’s new governor Koike Yuriko wasted no time in setting the tone for her administration, promising in her first meeting with municipal government officials that she would “put the citizens of Tokyo first.”

トランプ現象 — Toranpu genshō. As the “Trump phenomenon” swept across the United States, and indeed around the world, people in Japan also watched in amazement as Donald Trump’s strong, divisive rhetoric propelled him past Hillary Clinton to claim a stunning victory in the US presidential election.

パナマ文書 — Panama bunsho. Japanese firms were among those feeling the sting of the so-called Panama Papers, a leak of over 11 million documents from a Panamanian law firm detailing client-attorney information for close to a quarter-million offshore entities.

びっくりぽん — Bikkuri-pon. “Wow, what a surprise!” with its playfully quirky –pon suffix was the signature phrase of the protagonist Shirooka Asa in the NHK serial drama Asa ga kita (Here Comes Asa!), aired from September 2015 to April 2016. Model and actress Haru played the character, based on Hirooka Asako (1849–1909), an industrialist, educator, and social activist in early modern Japan.

文春砲 — Bunshun hō. The “Bunshun cannon” was one weapon that politicians and celebrities hoped would not be trained on them. During 2016 the weekly magazine Shūkan Bunshun printed scoops that torpedoed the careers of TV personality Becky, reported to be in an affair with married musician Kawatani Enon; Amari Akira, who stepped down as minister for economic and fiscal policy following accusations that he had accepted bribes; former baseball star Kiyohara Kazuhiro, arrested for drug possession; and Masuzoe Yōichi, who relinquished the Tokyo governor’s office due to allegations of improper use of public funds.

PPAP — “Pen Pineapple Apple Pen” was the catchy, if nonsensical, tune appearing in just about everyone’s Youtube browsing history this fall. With singing and dancing by Pikotarō, a character played by the comedian Kosaka Daimaō, the short video racked up tens of millions of plays—enough to land it at number 77 on Billboard’s Hot 100 chart. It was the first song by a Japanese artist to make the list in 26 years and, at just 45 seconds in length, was recognized as the shortest tune ever to appear there.

保育園落ちた日本死ね — Hoikuen ochita Nihon shine. “Couldn’t get my kid into nursery school. Japan can go screw itself.” This was the title for an anonymous blog post that went viral in February, with the author blasting Japanese government and society for asking women to bear children and take part in the workforce without providing the child-care systems to make this possible. “Why are you spending tens of billions of yen on the Olympics? Stop messing around with that emblem and build more nursery schools.” Her words found a receptive audience in a nation weighed down by demographic challenges.

（僕の）アモーレ — (Boku no) amōre. Japanese soccer star Nagatomo Yūto and actress Taira Airi announced their romance on June 1. In media appearances that followed, the defender for Italian club Inter Milan blushingly admitted, “She’s someone very important to me. My amore. It’s an Italian word for ‘loved one.’”

ポケモンGO — Pokémon Go. The mobile game was a global craze this year, particularly in Japan, where it launched in July. Developer Niantic’s placement of virtual Pokémon in real-world locations prompted millions to download the app and head out, smartphone in hand, to “catch ’em all.” Japan was the first market to feature an in-game business tie-up, as McDonald’s Japan registered all of its restaurants as locations in the game. 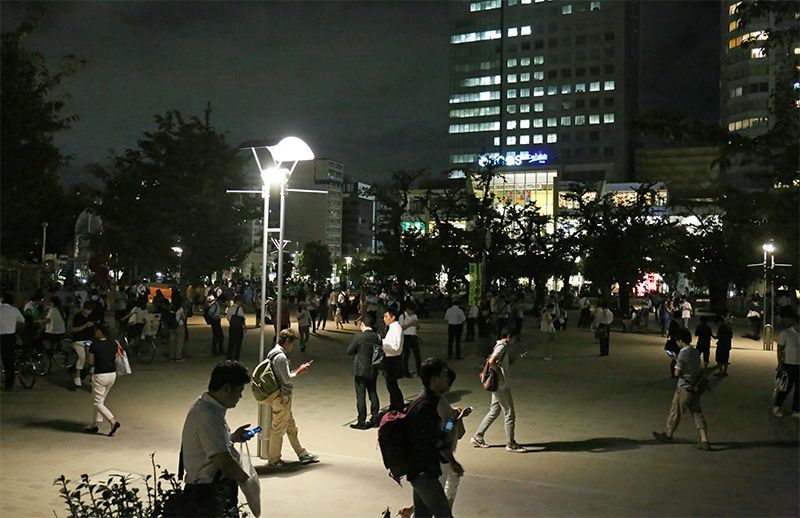 マイナス金利 — Mainasu kinri. “Negative interest rates” were the latest policy tool brought to bear by the Bank of Japan in January, when it cut the rate offered on new deposits to –0.1%. The central bank has been struggling to meet its stated goal of 2% annual price inflation, and this was an attempt to make it less attractive for financial institutions to park their cash and more attractive to get it cycling through the economy again. Sadly for the BOJ, though, the outcome has not been a marked uptick in lending.

民泊 — Minpaku. “Stays in private homes” refer to the sharing economy’s take on the hospitality industry, with private residence owners renting out properties to guests for short-term stays. In Tokyo, chronically short of hotel space for visitors, this practice is being eyed as a way to lessen pressure on the hospitality market, particularly as the capital gears up to host the Olympics and Paralympics in 2020. The government is moving gradually to legalize minpaku stays and regulate them as a new industry.

盛り土 — Morido. In August Tokyo Governor Koike postponed the planned relocation of the world-famous fish market from Tsukiji to Toyosu. Thereafter it came to light that this “layer of soil” had not been put down under the foundation of the new site, which formerly hosted a gas refinery that left high levels of chemical contamination in the soil and groundwater. Work is still underway to ascertain the site’s safety and to find out who was responsible for the missing layer of clean soil.

レガシー — Regashī. “Legacy” in this case refers to that left behind in an Olympic host city following the games. The International Olympic Committee’s Olympic Charter describes one IOC role as “to promote a positive legacy from the Olympic Games to the host cities and host countries.” This year saw fierce debate take place in Tokyo on the potential cost of constructing athletic facilities that would constitute that legacy.