Society Culture Dec 1, 2017
This year’s “Words of the Year” have been announced. Winning top honors for 2017 were insuta-bae, meaning everything that makes a photo worthy of posting to Instagram, and sontaku, the “surmising of wishes” that figured largely in the year’s political news. Below we list the 10 finalists and look at the judges’ reasons for choosing the two winners.

In “The Words of 2017,” published last month, we brought you the complete list of 30 nominees for this year’s Words of the Year. The publisher Jiyū Kokumin Sha, with sponsorship from the lifelong education company U-Can, announced the two winning words and eight other finalists at a December 1 ceremony at Tokyo’s Imperial Hotel.

Topping the list were insuta-bae, a term describing the way a given scene will “shine on Instagram,” and sontaku, a word that came to prominence when school operator Moritomo Gakuen was found to have purchased public land at well below its value. This led to conjecture that while Prime Minister Abe Shinzō may not have directly requested the sale to the company, run by a personal friend, officials had “followed his unspoken wishes” in approving the sale.

In describing the crop of terms that figured prominently in the popular consciousness this year, the selection-committee members noted the impact of the Internet and the political sphere on language in 2017. In her selection comments, the actress Muroi Shigeru described the presence of politics and policy in the nominees, including the Chi-ga-u-da-ro-! (“You’re. Just. Plain. Wrong!”), shouted at an underling by the LDP Diet member Toyota Mayuko, the J-arāto (J-Alert) early warning system that warned the Japanese of North Korean missile launches, and sontaku, one of the year’s winners.

The poet Tawara Machi, meanwhile, noted that living on Internet time gives many popular terms a shorter shelf life online while exposing the masses to them only after they are no longer so important in the digital space where they formed—one example being Yūchūbā (YouTubers), one of the 2017 nominees. Nonetheless, she said, the power of the visual image was clear in choices like insuta-bae—although, she wryly noted, saying that something “looks good in a photo, at least” was once far less of a compliment in Japanese.

Another committee member, manga artist Yaku Mitsuru, commented on the difficulty of selecting words with impact that is likely to last. “I keep my ears open for new and popular terms throughout the year . . . but in 2017, I found myself thinking ‘that doesn’t have much of a punch’ all year long.” He also noted the difficulty of choosing words that would attract people to the award ceremony to accept the prizes on the terms’ behalf, especially in cases where the words signify serious problems in the real world. “We’d love to get the people who said these things, even if they’re embarrassed by them, to come ring out the old year by laughing their statements off, but that isn’t easy to do for some of these terms.”

Finalists for the Words of 2017

インスタ映え — Insuta-bae [Winner]. The verb haeru, meaning “to look sharp” or “to stand out” as an image, combines with the name of popular photo-sharing service Instagram to create this term. Users in a constant search for the shots that will “really pop” on their screens—whether posted to Instagram or elsewhere on the web—made this a commonly used term this year.

忖度 — Sontaku [Winner]. As the level of Prime Minister Abe’s involvement in a kindergarten land deal scandal came into question, he insisted that he had given no order to sell it cheap. Some suggested, however, that officials had “followed his unspoken wishes.” The idea of underlings committing questionable deeds based on conjectures of what their superiors want was applied to other 2017 scandals. Formerly rather obscure, sontaku became the most searched term on online dictionary Goo for some four months from mid-March.

35億 — 35 oku. Japanese comedian Blouson Chiemi caused a stir in a sketch suggesting that women had plenty of choices for romance with “3.5 billion” men on the planet.

Jアラート — J-arāto. In a year in which North Korean missiles flew over Japanese territory, the new “J-Alert” nationwide early warning system gained broad recognition. Originally launched in 2007 to warn citizens of weather and other natural disasters, as well as external threats like missile launches, the system beams alerts via satellite to local governments, which then forward the information to residents.

睡眠負債 — Suimin fusai. Professor Nishino Seiji, a researcher at Stanford Center for Sleep Sciences and Medicine, warned against the dangers of accumulated “sleep debt,” stating that it increased the likelihood of dementia and other disorders.

ひふみん — Hifumin. The nickname of legendary shōgi player Katō Hifumi, who set down his game pieces on June 20 after more than six decades as a professional player. He won a loyal following for his playing style and quirky personality over his long career, which started at the tender age of 14 years and 7 months, a record at the time. His final match was against junior-high-school prodigy Fujii Sōta (who himself provided Fujii fībā, “Fujii fever,” another nominee this year). 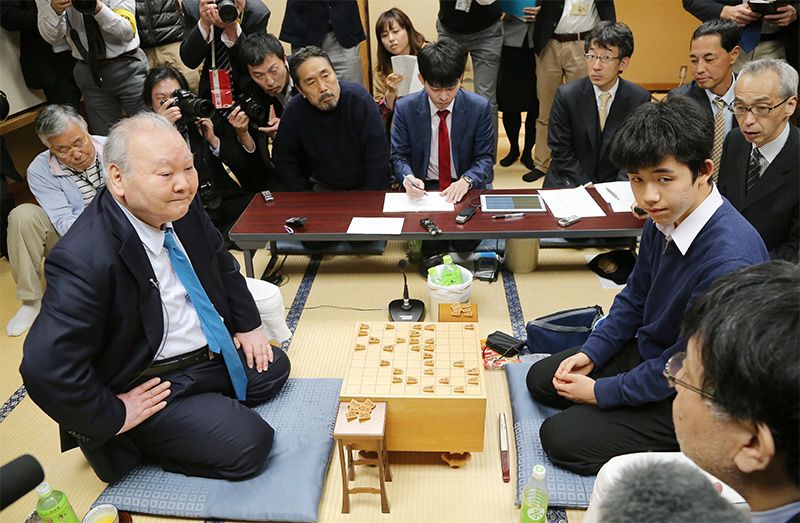 Katō lost to Fujii in December 2016 in the newcomer’s professional debut. (© Jiji)

フェイクニュース — Feiku nyūsu. Japan was not immune to the barrage of fake news that inundated the Internet in the run-up to the United States presidential election. Many news outlets in the country were red in the face after reporting made-up stories from seemingly credible sites.

プレミアムフライデー — Puremiamu furaidē. Japan launched the “Premium Friday” campaign in a bid to boost sluggish consumer spending by encouraging employees to leave work early the last Friday of each month to enjoy shopping and dining. The public-private initiative has been backed by thousands of companies and organizations, and stores, restaurants, and other businesses have joined in with deals to entice workers to open their wallets.

魔の2回生 — Ma no 2 kaisei. The “second-termer demon” was a dark cloud that seemed to loom over second-term legislators of the ruling Liberal Democratic Party, as gaffes, extramarital affairs, and public rants ended the careers of several among their ranks.

〇〇ファースト — XX fāsuto. Prioritization was a major theme as US President Donald Trump set an isolationist tone with his promise to put “America First,” and Tokyo Governor Koike Yuriko’s Tomin First no Kai (Tokyoites First) won a landslide victory in the capital’s metropolitan assembly elections. However, 2017 also saw a slew of public figures publicly rebuked for putting their own interests first.

The judges for this year’s contest also selected two terms for special recognition, including one that was not on the original list of 30 nominees. The world of sports provided 9.98, the number of seconds it took a Japanese sprinter to set a new national record for the 100-meter dash, breaking the 10-second barrier for the first time. The traditional game of shōgi, meanwhile, brought another new record: 29 renshō, the “29 straight victories” enjoyed by the nation’s youngest shōgi sensation, Fujii Sōta.

9.98 (10秒の壁) — 9.98 (10 byō no kabe). When Kiryū Yoshihide ran the 100-meter dash in 9.98 seconds at a Fukui Prefecture meet on September 9 this year, he became the first Japanese sprinter ever to break the “10-second barrier.” By taking the national record from Itō Kōji, whose 10.00-second mark had stood since 1998, Kiryū cemented his position as Japan’s premier short-distance runner. 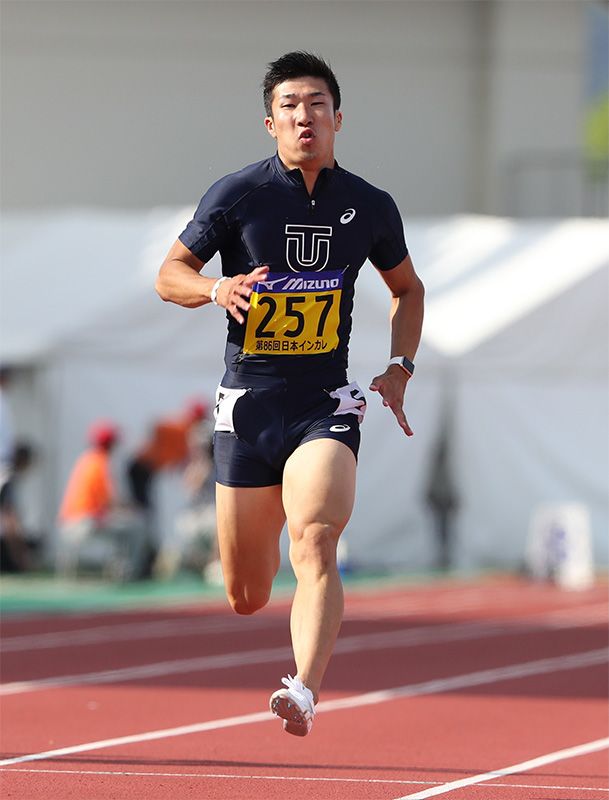 Kiryū became the fastest Japanese sprinter in history in September with his sub-10 100-meter mark.

29連勝 — 29 renshō. The longest-ever winning streak in the world of professional shōgi was achieved this year by one of its youngest-ever players, the 15-year-old prodigy Fujii Sōta. This was not included on the list of nominees last month, but made the cut for the final ceremony nonetheless. 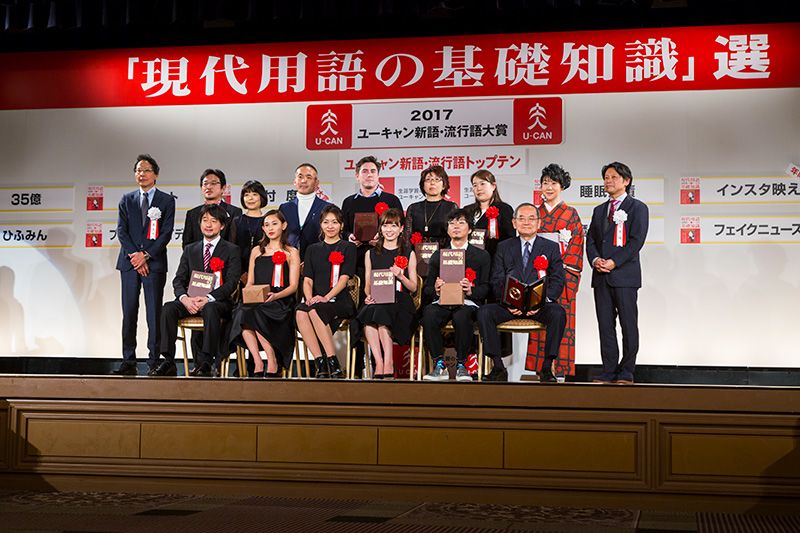 Coiners of the winning words and others invited to receive awards on their behalf on stage at the December 1 ceremony at the Imperial Hotel in Tokyo.