Society Culture Nov 10, 2017
Jiyū Kokumin Sha, a publisher of language reference texts, has released its highly anticipated nominees for Japan’s “Words of the Year.” Read on to learn the 30 terms and phrases that encapsulate 2017 for the Japanese public.

What words best describe the year that was, as we move toward 2018? Jiyū Kokumin Sha—publisher of Gendai yōgo no kiso chishiki (Basic Knowledge on Contemporary Terminology), an annual guide to the freshest terminology in the Japanese language and the events that created them—has announced its list of 30 nominees for the Words of the Year, the terms that helped to define what sort of year 2017 was for the nation.

This year’s terms, selected by a five-member committee including the poet Tawara Machi and Kang Sang-jung, professor emeritus at the University of Tokyo, touch on everything from pop culture to politics and government policy. Below we present the 30 terms and our explanations for them.

The top 10 finalists and the winning Words of the Year will be announced on December 1. Check back to see which terms come out on top in 2017!

Nominees for the Words of 2017

アウフヘーベン — Aufuhēben. Tokyo Governor Koike Yuriko reached for her German dictionary, using the word Aufheben, meaning “lifting up,” to describe a metropolitan project team’s plan to revamp the Tsukiji fish market after its main functions are transferred to a new facility in Toyosu. Most Japanese dictionaries define this as “sublation,” a Hegelian philosophy term, but Koike noted that she was expressing the metropolitan government’s intention “to stop and take stock of what the market is now before taking it to a higher level.”

インスタ映え — Insuta-bae. The verb haeru, meaning “to look sharp” or “to stand out” as an image, combines with the name of popular photo-sharing service Instagram to create this term. Users in a constant search for the shots that will “really pop” on their screens made this a commonly used term this year.

うつヌケ — Utsunuke. Tanaka Keiichi’s bestselling book Utsu tonneru o nuketa hito-tachi (People Who Have Exited the Depression Tunnel), published in January, was popular enough to get a shorthand nickname. The autobiographical manga describes the author’s experience with depression and his tips for escaping the “dark tunnel” where he spent a decade of his life.

うんこ漢字ドリル — Unko kanji doriru. The title of a wildly popular series of children’s kanji study texts made the list not just because of the huge sales these books enjoyed, but also because of its shock value. The “Poop Kanji Drills” let learners master these complex characters with example sentences that all include unko, or “poop.” Millions of copies of the books are now in the hands of giggling learners across Japan. 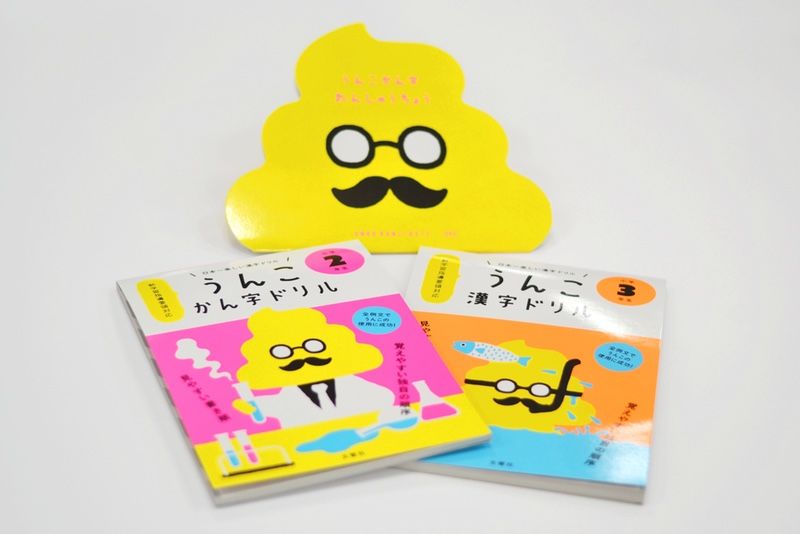 "Professor Poop" is the character guiding kanji learners through these popular practice books.

炎上○○ — Enjō XX. The mass flaming attacks known as enjō are an increasingly common occurrence in the Japanese internet sphere. In 2017 a number of companies took commercials off of the air or the web in the face of waves of accusations that they were sexist; Miyagi Prefecture, too, pulled a PR campaign ad featuring sexy star Dan Mitsu after netizens complained that it was too lurid. The word enjō now functions as an adjective, too, in constructs like “enjō marketing,” the practice of seeking to touch off a flaming session to build buzz for a brand.

AIスピーカー — AI supīkā. The nation’s electronics stores devoted more and more floor space to “AI speakers” this year. With voice-recognition technology and always-on connections to artificial intelligence engines in the cloud, these “smart speakers” are making their way into the homes of users eager to access information with a few spoken words, rather than a keyboard or touchscreen.

9.98 (10秒の壁) — 9.98 (10 byō no kabe). When Kiryū Yoshihide ran the 100-meter dash in 9.98 seconds at a Fukui Prefecture meet on September 9 this year, he became the first Japanese sprinter ever to break the “10-second barrier.” By taking the national record from Itō Kōji, whose 10.00-second mark had stood since 1998, Kiryū cemented his position as Japan’s premier short-distance runner.

共謀罪 — Kyōbōzai. “Conspiracy” was the criminal subject of a new law rammed through the Diet in June by the Liberal Democratic Party and its coalition partner Kōmeitō. Proponents of the bill called it necessary to punish people planning and preparing terrorism or other serious crimes, but critics described it as excessively vague, open to abuse by the authorities, and a potential threat to public freedoms in Japan.

Ginza Six — The former site of the Matsuzakaya department store in Tokyo’s ritzy Ginza district is now home to this glittering new shopping facility. Its 150,000 square meters of floor space hold global brand retail outlets, offices, a nō theater, and much more, making it a draw for Tokyoites as well as inbound tourists. 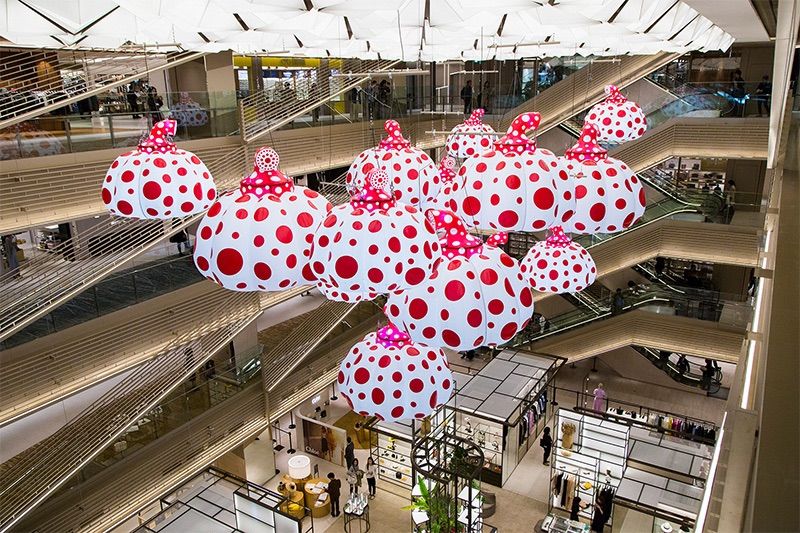 空前絶後の — Kūzen zetsugo. The energetic comedian Sunshine Ikezaki broke into the entertainment big leagues this year with his over-the-top self-introduction. “Never before seen, and never to be seen again” begins his signature phrase, in which he goes on to describe himself as a “transcendent solo comedian who stands above all the rest.”

けものフレンズ — Kemono furenzu. Video game and anime hit Kemono Friends imagined a zoo where animals anthropomorphized into girls. The show made international headlines when a penguin called Grape at Saitama Prefecture’s Tōbu Zoo became attached to a cardboard cutout of penguin girl Hululu from the series, originally placed in his enclosure for a promotion. Grape’s death in October brought outpourings of grief from fans.

35億 — 35 oku. Japanese comedian Blouson Chiemi caused a stir in a sketch suggesting that women had plenty of choices for romance with “3.5 billion” men on the planet.

Jアラート — J-arāto. In a year in which North Korean missiles flew over Japanese territory, the new “J-Alert” nationwide early warning system gained broad recognition. Originally launched in 2007 to warn citizens of weather and other natural disasters, as well as external threats like missile launches, the system beams alerts via satellite to local governments, which then forward the information to residents.

人生１００年時代 — Jinsei 100 nen jidai. Prime Minister Abe Shinzō launched a new task force in September 2017, considering policies for adapting to “an era of 100-year lifespans.” In 2016, Japan had 65,692 centenarians, making it one of the longest-lived nations in the world.

睡眠負債 — Suimin fusai. Professor Nishino Seiji, a researcher at Stanford Center for Sleep Sciences and Medicine, warned against the dangers of accumulated “sleep debt.” He has argued that a lack of healthy sleep increases the likelihood of dementia and other disorders.

線状降水帯 — Senjō kōsuitai. When multiple cumulonimbus clouds line up together, they can lead to torrential rainfall as they pass continuously over a single area. In 2017, these “linear rainbelts” caused flooding and landslides in Kyūshū and other locations.

忖度 — Sontaku. As the level of Prime Minister Abe’s involvement in a kindergarten land deal scandal came into question, he insisted that he had given no order to sell it cheap. Some suggested, however, that officials had “followed his unspoken wishes.” The idea of underlings committing questionable deeds based on conjectures of what their superiors want was applied to other 2017 scandals. Formerly rather obscure, sontaku became the most searched term on online dictionary Goo for some four months from mid-March.

ち—が—う—だ—ろ—！ — Chi-ga-u-da-ro-! LDP lawmaker Toyota Mayuko resigned from the party after revelations of violence against her secretary. A recording made by the secretary in which she mocked his baldness and shouted “You’re. Just. Plain. Wrong!” in a strident, nasal voice, went public in June.

刀剣乱舞 — Tōken ranbu. The “Wild Swords Dance” franchise first won devoted sword girls, or tōken joshi, as an online game in 2015, when that term made the list of nominees. The series, featuring swords transformed into handsome men, went from strength to strength in 2017 with new musical and anime adaptations.

働き方改革 — Hatarakikata kaikaku. Japan faces employment issues including a shrinking working population and death by overwork. How to tackle these through “work-style reform” became one of this year’s big topics.

ハンドスピナー — Hando supinā. The hand spinner craze that started in the United States hopped the Pacific at the end of last year and took firm root in Japan, winning over children and grownups alike.

ひふみん — Hifumin. The nickname of legendary shōgi player Katō Hifumi, who set down his game pieces on June 20 after more than six decades as a professional player. He won a loyal following for his playing style and quirky personality over his long career, which started at the tender age of 14 years and 7 months, a record at the time. In December 2016 he lost to junior-high-school prodigy Fujii Sōta, who was making his pro debut.

フェイクニュース — Feiku nyūsu. Japan was not immune to the barrage of fake news that inundated the Internet in the run-up to the United States presidential election. Many news outlets in the country were red in the face after reporting made-up stories from seemingly credible sites.

藤井フィーバー — Fujii fībā. Excitement over young shōgi sensation Fujii Sōta hit a fever pitch when the 14-year-old junior high school player set a record with 29 consecutive wins following his professional debut in December 2016. Fans closely followed the progress of each match, including what Fujii ate for lunch, and victories were widely reported in the press. 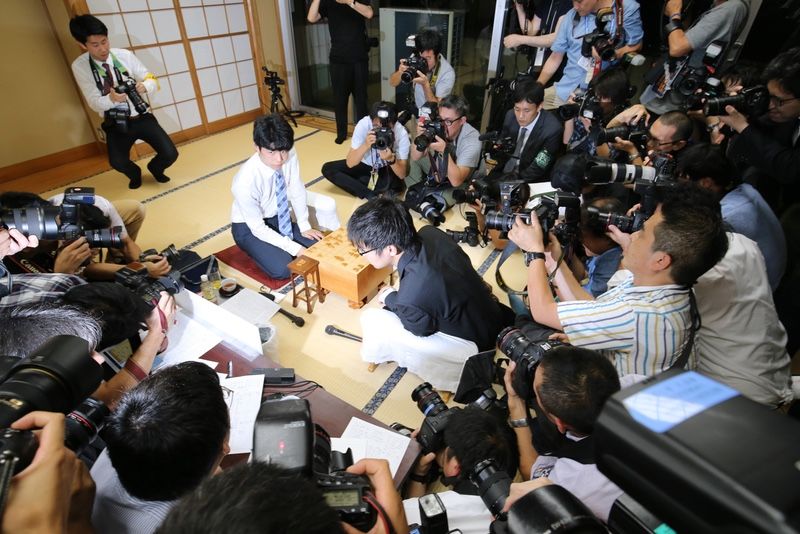 Fujii, in shirtsleeves, faces an unprecedented number of media photographers along with his opponent, Masuda Yasuhiro, in the June 26 match that would be his twenty-ninth consecutive win. (© Jiji)

プレミアムフライデー — Puremiamu furaidē. Japan launched the “Premium Friday” campaign in a bid to boost sluggish consumer spending by encouraging employees to leave work early the last Friday of each month to enjoy shopping and dining. The public-private initiative has been backed by thousands of companies and organizations, and stores, restaurants, and other businesses have joined in with deals to entice workers to open their wallets.

ポスト真実 — Posuto shinjitsu. The selection of “post-truth” as the 2016 Oxford Dictionaries word of the year had reverberations in Japan. Experts in the country have decried how discussions online and in the press are increasingly being led astray by personal opinions and subjective takes on the facts.

魔の2回生 — Ma no 2 kaisei. The “second-termer demon” was a dark cloud that seemed to loom over second-term legislators of the ruling LDP, as gaffes, extramarital affairs, and public rants ended the careers of several among their ranks.

〇〇ファースト — XX fāsuto. Prioritization was a major theme as US President Donald Trump set an isolationist tone with his promise to put “America First,” and Tokyo Governor Koike Yuriko’s Tomin First no Kai (Tokyoites First) won a landslide victory in the capital’s metropolitan assembly elections. However, 2017 also saw a slew of public figures publicly rebuked for putting their own interests first.

ユーチューバー — Yūchūbā. “YouTubers” in Japan and abroad captured the attention of viewers with appealing online videos. Starring in YouTube videos has become a lucrative business, with the right persona and approach garnering top creators millions of followers and attractive payoffs.

ワンオペ育児 — Wan ope ikuji. Parenting is a full-time job, and in Japan it largely remains a “one-person operation” dominated by women. Like employees left to run shops on their own, Japanese mothers are stuck with the full range of parental duties, but often receive little or no support from partners or other family members.