Society Culture Jul 4, 2016
Small, circular or square seals dipped in red ink are used instead of a signature on many documents in Japan, ranging from simple delivery slips to official forms such as bank applications and marriage registrations.

Stamp on the Dotted Line

Japanese regularly validate day-to-day documents, as well as official forms, with hanko, personal seals made from wood, plastic, and other materials. These stamps, which carry the same weight as signatures in other countries, are engraved with the name of the person or organization applying them.Generally round or square in shape, they are wet on red pads of ink called shuniku and pressed onto documents to leave marks known as inkan.(*1)

Seals are first thought to have been used in Mesopotamia in the fifth millennium BCE. Their application in Japan is much more recent, with the country’s oldest known hanko being a gold-cast stamp bestowed on a Japanese envoy to China by the ruler of the Han dynasty in 57 CE.

In Japan, governments and influential groups like temples have relied on seals since ancient times, but it wasn’t until a law passed early in the Meiji era (1868–1912) establishing a national system for registration and certification that personal stamps became broadly used throughout society. In modern times signatures are becoming more commonly accepted, but many types of official forms still require a natsuin, or affixed seal.

In Japanese offices personal stamps verify who has viewed in-office announcements and other documents, while managers will use their hanko to “sign off” on proposals—or, from the perspective of subordinates, may withhold it to passively assert their influence.

People commonly have three types of hanko: an officially registered seal or jitsuin, a ginkōin for standard bank transactions, and a mitomein for day-to-day use.

Among these the jitsuin carries the highest legal authority and is required for such dealings as purchasing real estate or automobiles, transferring titles or ownership, taking out a loan, and filing a will. Anyone over the age of 15, including foreign nationals legally residing in Japan, can officially register a seal at their city hall. Upon registration, local authorities issue the holder an inkan card that can be used to print a certificate demonstrating ownership of the seal, helping prevent fraud. 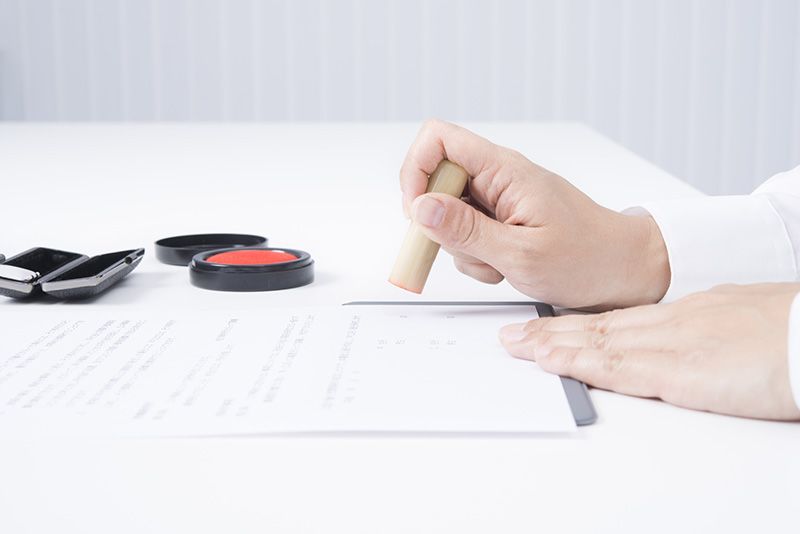 Affixing a personal seal is the preferred method for authorizing documents.

Banks frequently require customers to register a ginkōin when opening an account. While these account-specific seals remain the norm, many online and foreign-based institutes also accept signatures, and some of Japan’s major lenders are moving toward biometric systems.

Mitomein serve for commonplace transactions such as filing application forms at city hall and receiving packages from takuhai delivery services and the post office. Unlike more official varieties, which are generally made to order, these everyday hanko are widely available. They include cheap, premade stamps and self-inking seals offered at stationery stores and ¥100 shops.

Foreign residents of Japan can choose between engraving their name in the Roman alphabet or native katakana syllabary. There are many stores that will even render the pronunciation of foreign names using kanji. 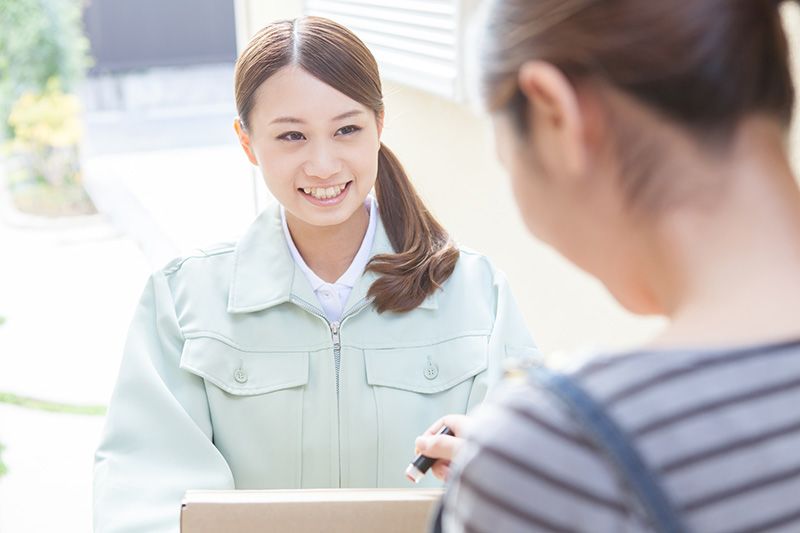 It is common to stamp delivery invoices when receiving packages.

A Selection of Seals 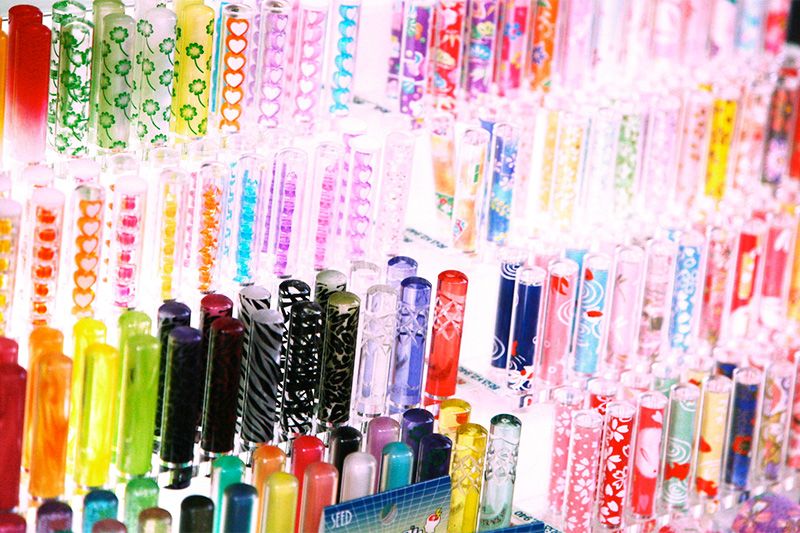 One recent trend is to give decorative seals as gifts, such as for birthdays and weddings. Stamps decorated with rhinestones or designed with lacquer and washi paper to imbue a traditional Japanese feel are popular, particularly among women. Ornamentation also extends to carrying cases, with younger users being fond of well-known characters and matching design themes for both case and hanko. Stamps carved from a water buffalo horn are often preferred by men for their bold appearance. 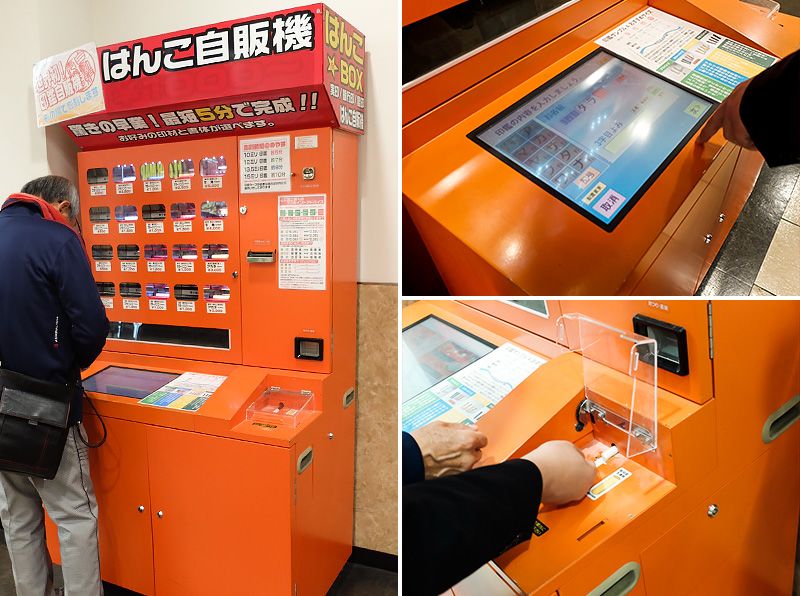 (Clockwise from left), A hanko vending machine at Don Quijote; a customer uses a touch panel to choose the characters for a seal; an uncarved stamp is placed in the machine.

People in urgent need of a seal or looking to make a commemorative hanko as a souvenir can use vending machines located at select Tōkyū Hands stores to produce a custom stamp in 30 minutes for around ¥1,000. Popular discount franchise Don Quijote offers similar dispensers that allow customers to choose the material for their hanko—prices range from ¥500 to ¥5,000 and instructions are only in Japanese—producing a seal in 5 to 10 minutes. 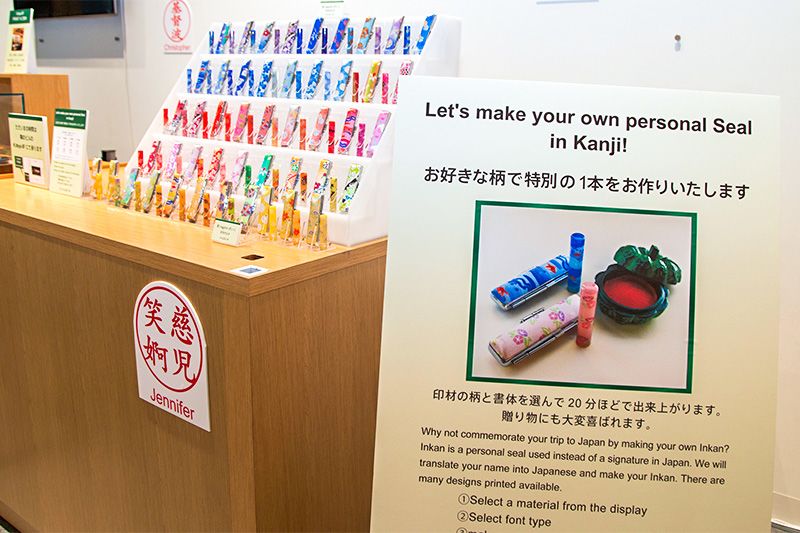 The hanko corner at Ginza Itōya.

Stationery shop Ginza Itōya has recently launched a hanko service for tourists that renders foreign names into phonetic-equivalent kanji. For ¥1,500–¥4,200, customers can use up to four characters on their seal, and the shop will provide meanings. Certain types of stamps also come with a carrying case.

With so many ways to use and enjoy stamps, it’s easy to see why they remain a prominent part of life in Japan.

(*1) ^  Strictly speaking, the inkan is the mark left from an inked impression, but in everyday Japanese, the word inkan is frequently used as a synonym for hanko.