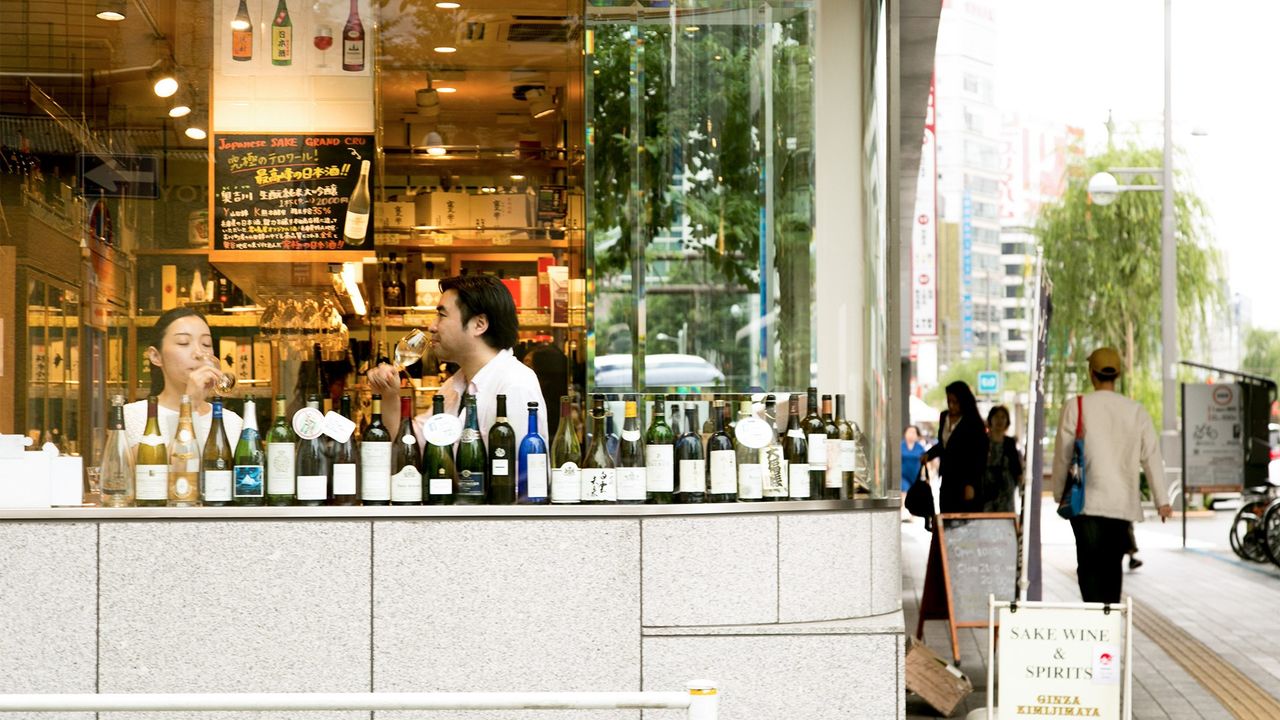 Culture Sep 14, 2018
Jizake specialty shops are great places to search for that perfect bottle of sake for any given occasion—or just for your own delectation. Specializing in premium sake from microbreweries around Japan, stores like Yokohama Kimijimaya are staffed by experts who know their nihonshu and are eager to share their knowledge.

Not Your Grandfather’s Sake Shop

Although established way back in 1892, Yokoyama Kimijimaya is not your grandfather’s sake shop. All the nihonshu and wine sold at Kimijimaya’s three locations (two in Tokyo in addition to its main store in Yokohama) is hand-picked by fourth-generation owner Kimijima Satoshi, who personally visits the brewer or vintner and tastes each product on-site before making a purchase.

Owing to space limitations, the Ginza store carries a smaller selection than the other locations: about 300 carefully chosen premium sakes, mostly in smaller bottles (along with some traditionally crafted Japanese shōchū and French wine imported directly from the source). But the Ginza location has the added appeal of a tasting bar. Customers crowd happily around the counter, sampling fine sake accompanied by small plates.

Tasting is one good way to decide what to buy. In addition, like most jizake specialty shops, Kimijimaya is staffed with knowledgeable personnel trained to help customers find a sake that suits their tastes and needs. At Ginza Kimijimaya, that includes English-speaking staff.

When I interviewed Kimijima, he had just returned to Japan from London, where he had helped preside over the sake-tasting panel at the annual International Wine Challenge. In addition to managing his thriving import and retail business, Kimijima serves as vice-president of the Japan Sommelier Association and teaches a variety of classes and seminars in sake and wine tasting, including courses leading to the JSA Sake Diploma. He has even given private lessons to world-renowned patissier Pierre Herme. In short, he is one of a relatively small number of respected nihonshu authorities who brings a truly international perspective to the field. 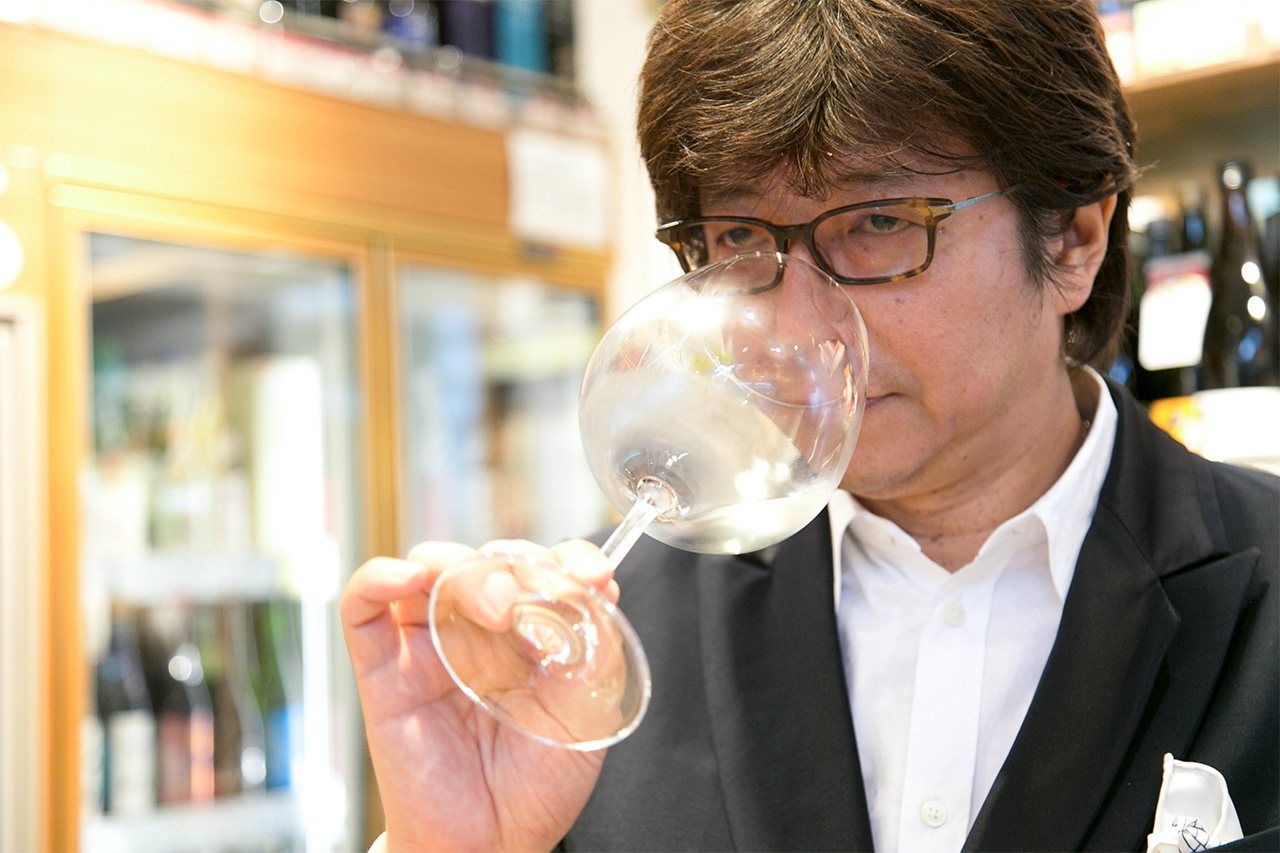 In Sync with the Sake Revolution

One basic factor driving the rise of jizake specialty stores is the change that has swept Japan’s sake-making industry over the past 10 or 20 years.

Until fairly recently, most family-owned breweries left the sake-making process to teams of seasoned professional brewers who hired themselves out on a seasonal basis. But some of the young owners who took control in the 1980s and 1990s, amid dwindling sake sales, realized that something had to change. After studying up on brewing theory and technology at regional universities and research facilities, they rolled up their sleeves and took charge with a view to controlling each aspect of the complex sake-brewing process—in some cases starting with the cultivation of rice.

Armed with improved ingredients and techniques, these passionate young brewer-owners managed to develop distinctly modern, “juicy” flavor profiles that dramatically broadened the appeal of nihonshu. The new nihonshu proved a hit not only with younger consumers and women in Japan but also with Western foodies and culinary professionals steeped in the culture of wine. As Kimijima put it, “The determination of Japan’s young brewers to keep improving their products is what transformed nihonshu and broadened its appeal.” 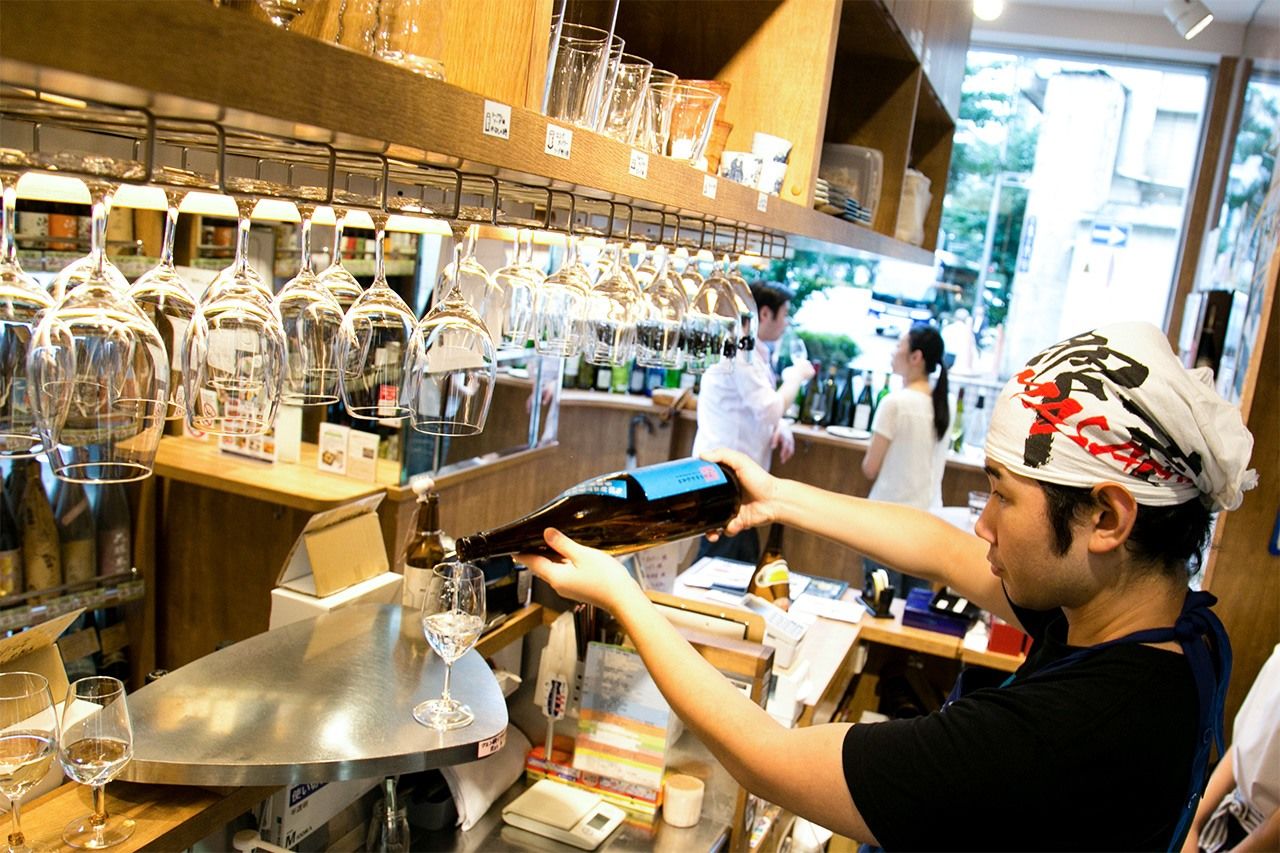 The tasting bar at Ginza Kimijimaya offers about 20 varieties of nihonshu. 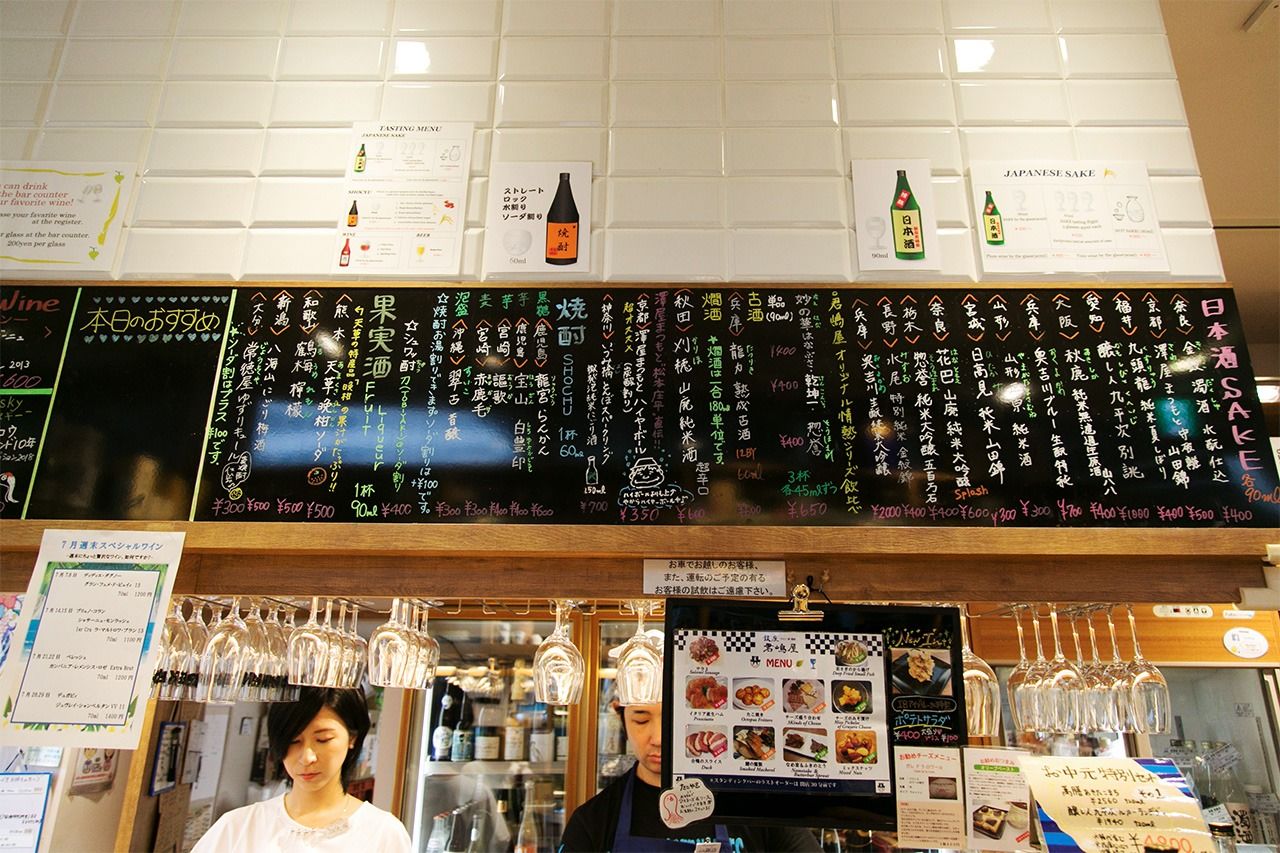 For pairing purposes, the bar has a menu of about 10 snacks ranging from takoyaki  and smoked mackerel to prosciutto and cheese.

With something like 1,500 breweries of all sizes dotting the Japanese archipelago, jizake specialty shops typically apply some geographical or other criteria to narrow the selection down, giving each boutique its own distinct personality. Kimijima’s theme is “sake that complements today’s food scene.” He is looking for nihonshu that goes well with contemporary cuisine, and for him, that means “a complex flavor that’s rich in umami but refined, not heavy, with a clean finish.”

In addition to supporting his suppliers by holding sake-tasting events in Japan and overseas, Kimijima likes to take them along with him when he travels to France to visit local wineries. “Really distinguished winemakers have a special aura about them, and I think a sake brewer can gain inspiration from meeting them and watching them work. But even more than that, I look on these trips as an opportunity to dine out with my suppliers and in the process convey my ideas about sake and food.” Far-sighted sake retailers like Kimijima have played a far more important role in the sake renaissance than is commonly recognized. 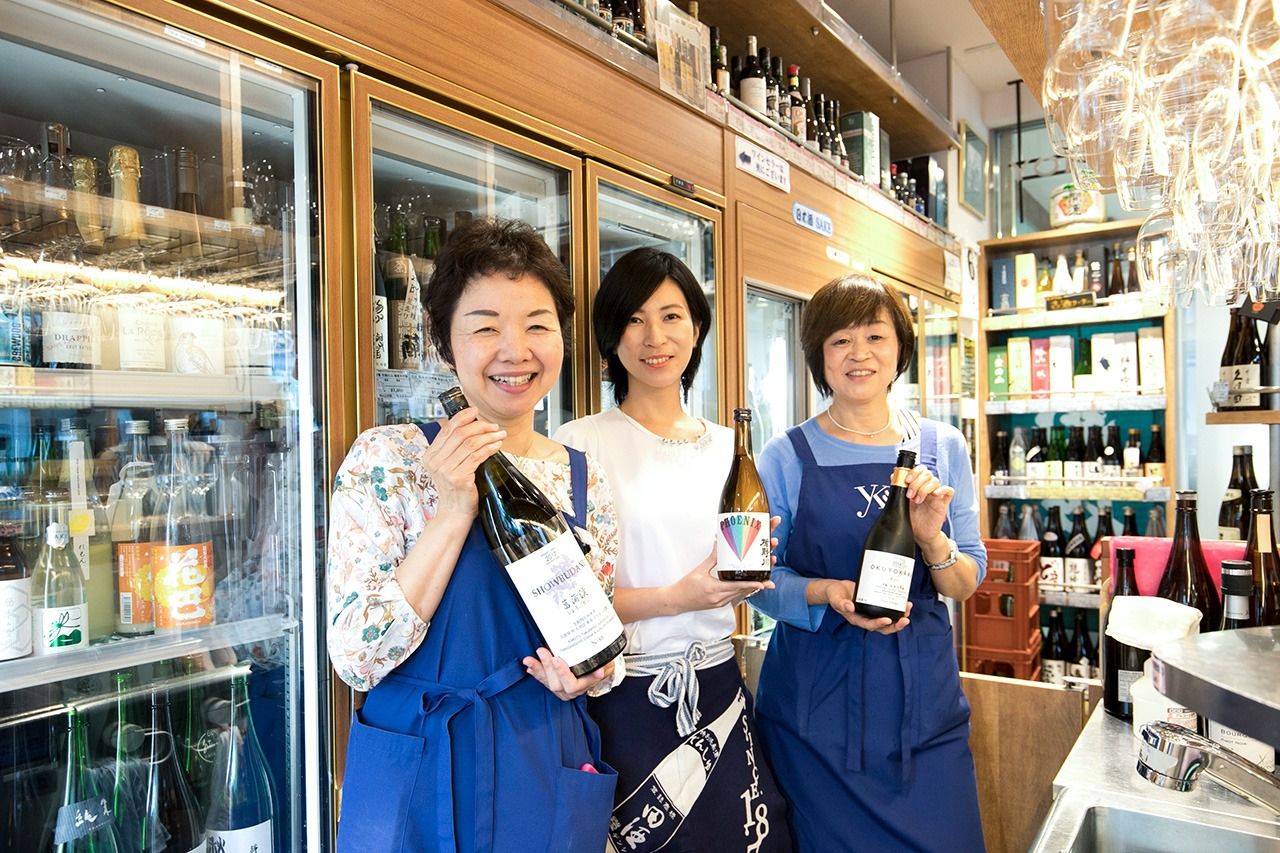 Ginza Kimijimaya store manager Kamimura Shōko (left), is a certified senior sommelier who previously put her skills to work at an airline company. The shop is equipped to advise and assist customers in both Japanese and English.

Rise of the Jizake Boutiques

The term jizake came into currency in the late 1970s, and shops specializing in jizake began springing up during the 1980s, as deregulation threatened the viability of traditional neighborhood liquor stores.

For many years Japan’s licensing system had protected small liquor retailers by prohibiting the sale of alcoholic beverages at large establishments or chains. The government began dismantling those regulations in the 1980s, opening the door to bigger stores and chains. Since 2006, retail liquor licenses have been available to supermarkets, convenience stores, discount stores, and other retailers. According to the latest government statistics, alcoholic beverages (in closed containers) can now be purchased at about 161,400 establishments nationwide.

Many neighborhood liquor stores were forced out of business, unable to match the big retailers’ wide selection and low prices. Some, however, managed to survive deregulation by changing their business model. Particularly successful were those that linked up with microbreweries around Japan to offer their own distinctive selection of premium craft sakes. Thus were born Japan’s jizake specialty stores. Kimijima made the shift to a specialty store back when he took over the business in 1983.

Kimijimaya may not always stock the big, heavily advertised brands, but it offers a distinctive selection of hard-to-find labels hand-picked by a connoisseur. The store even has its own exclusive “limited edition” collection of ultra-small-batch sakes. “If you’re particular about taste and looking for the perfect fit, it’s well worth your while to visit a specialty store like ours. We can help you hook up with the sake of your dreams.” 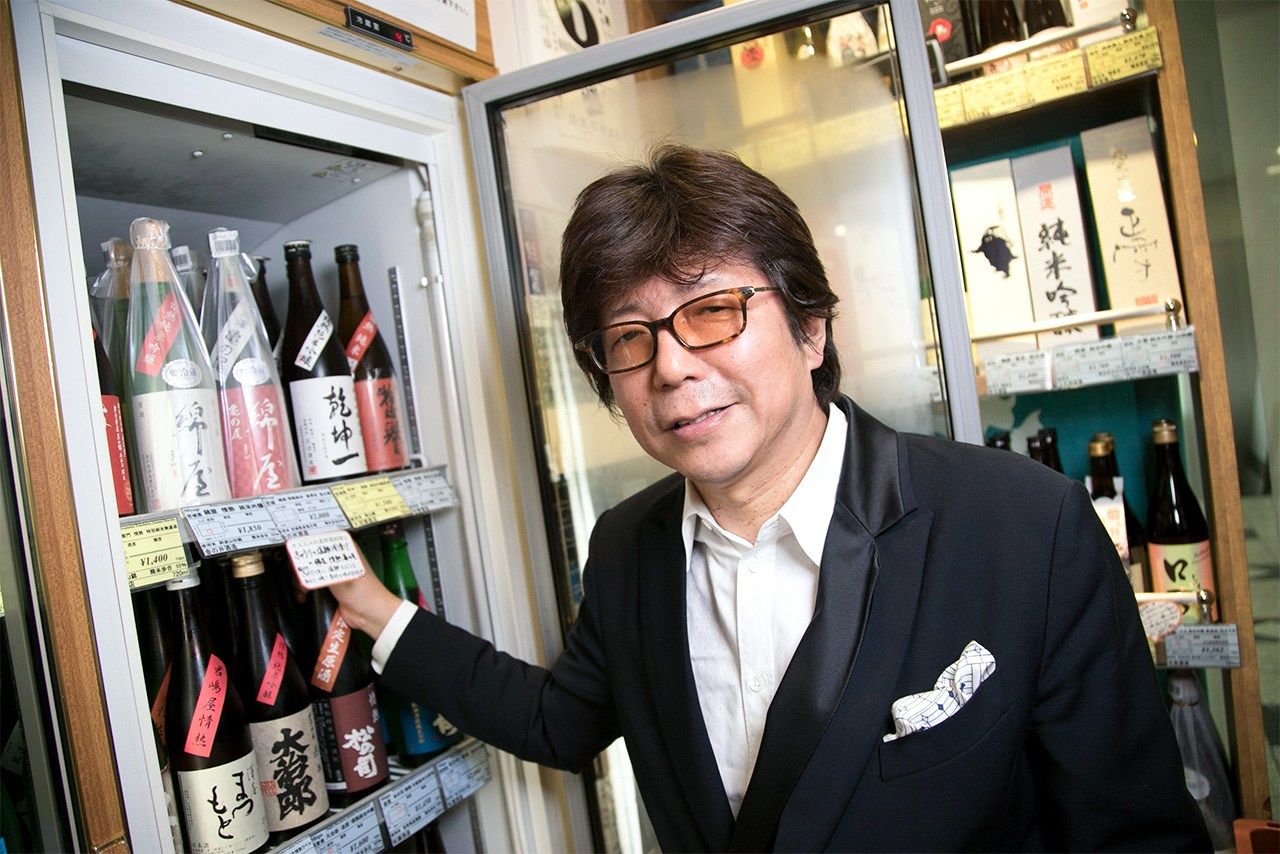 The Passion Series is a collection of fine local sakes produced in very limited quantities under exclusive agreement with Kimijimaya.

When Kimijima was a child, the family business was a distinctly plebeian establishment, part liquor store, part watering hole. Men would wander in, choose a bottle of some low-grade sake or shōchū blend, and drink it standing at the counter. As a result, Kimijima grew up thinking of sake as something people drank to get high, and he had little appetite for the family business. He went to college, graduated, and found a sales job. But his father’s health was failing, and at age 24, he was obliged to take over as company president.

What changed Kimijima’s attitude toward nihonshu and the business was a fateful encounter at a bar—specifically, his first taste of Masuizuimi, a celebrated daiginjō from Toyama Prefecture. “I was blown away by its elegant, fruity flavor and fragrance,” says Kimijima. “I realized that I didn’t mind the idea of operating a liquor store if it specialized in products like that.” Soon he was traveling to breweries all over Japan in search of fine jizake to introduce to sophisticated consumers in the Tokyo-Yokohama area.

After visiting countless breweries and wineries over the years, Kimijima has concluded that when it comes to taste, nothing is more important than the individual artisan. “Of course, climate and soil and water play a part,” he says. “But the source of really great sake is the brewer’s passion. You can see it in their faces. They make sake because they want to delight and thrill other people. I sense something in them that I also see in dedicated artists and musicians.”

Kimijima happens to be a rock musician himself, and among his songs is one titled “Nihonshu ga saikō” (Nihonshu is Awesome). “Who needs weapons? Everyone grab a glass!” he belts out. In Kimijima’s possibly biased view, sake—along with rock music—has the power to bring about world peace. “That’s because people who really love good music, food, and drink have no desire to fight,” he explains as he fills up our glasses again. 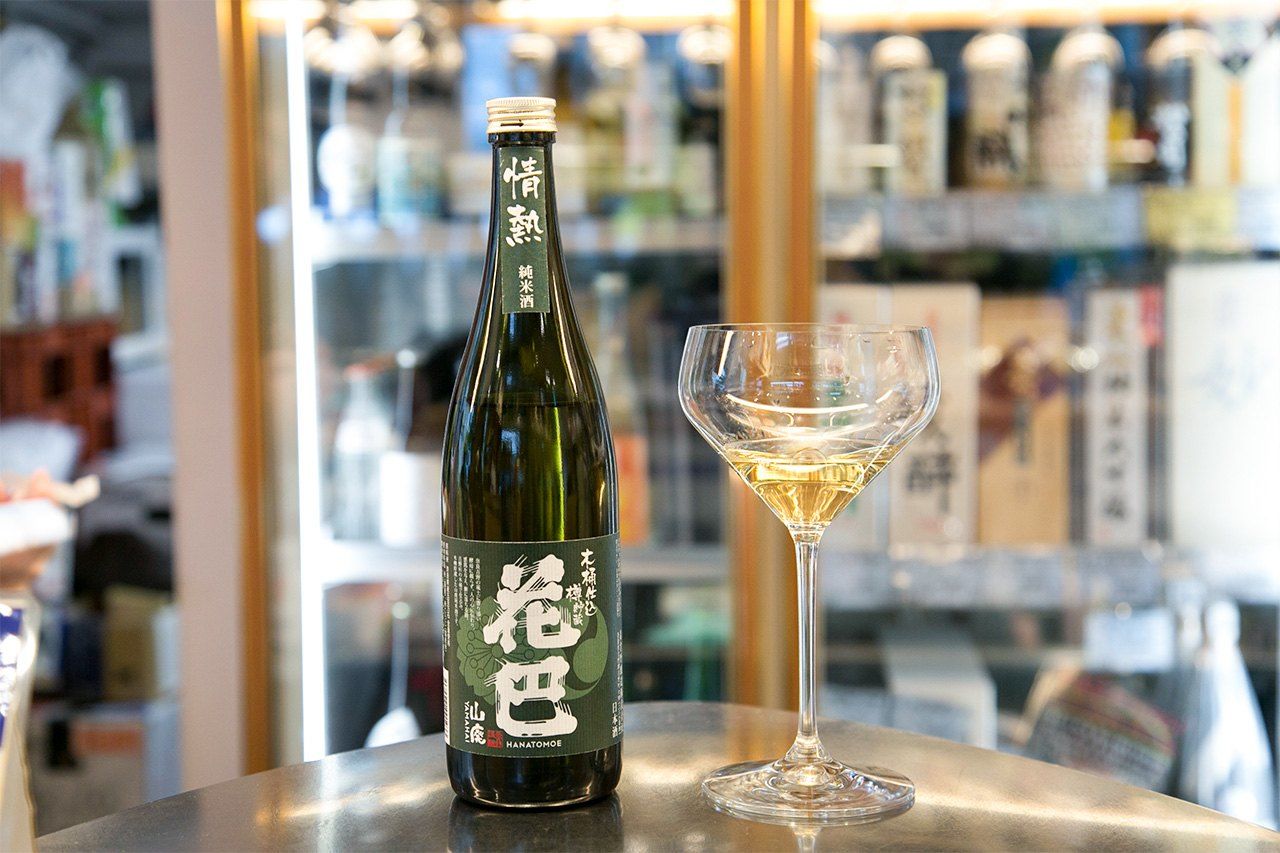