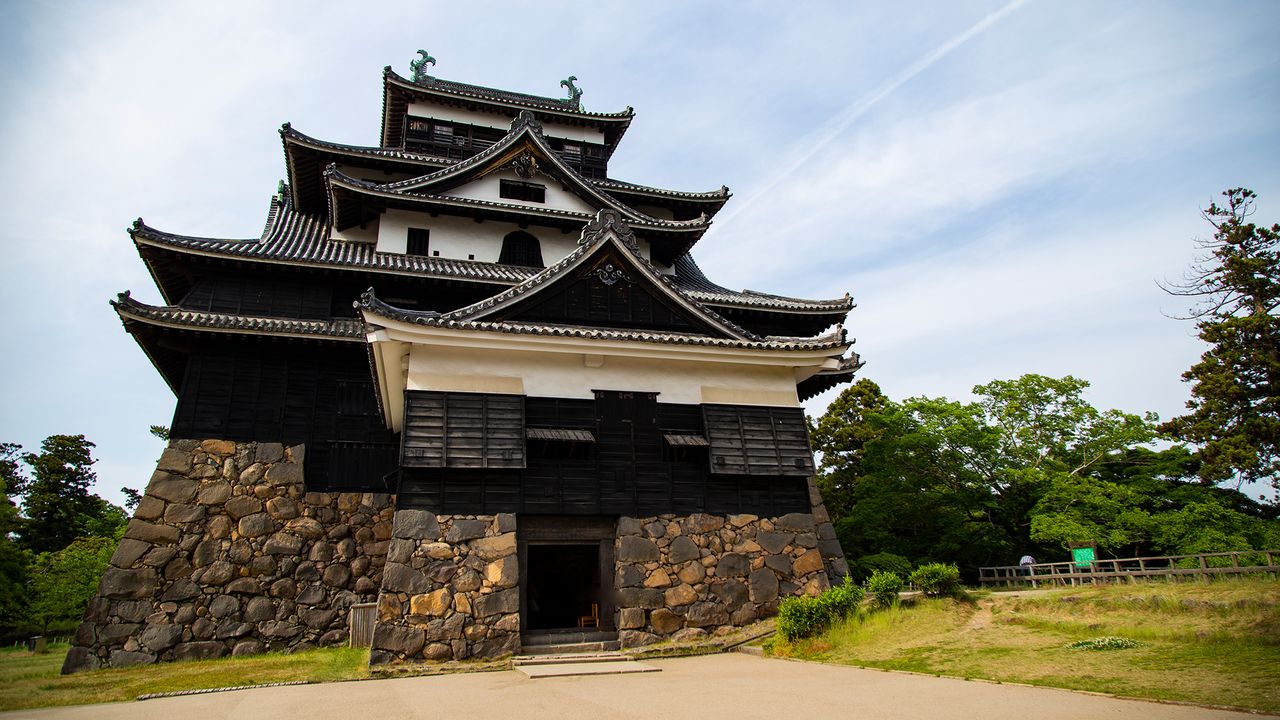 A Castle Town on the Water: Exploring Matsue’s Samurai Past

Travel Jul 24, 2019
Surrounded by water and centered on its own castle, Matsue is a joy to explore.

Matsue in Shimane Prefecture is a city on the water. A prosperous castle town during the Edo period (1603–1868), today it attracts some 10 million visitors annually who come to stroll the historic streets and leisurely cruise the network of waterways crisscrossing the city. These canals, or horikawa, are part of the expansive moat of Matsue Castle that is fed by the nearby Ōhashi River, which itself joins the placid waters of Nakaumi lagoon to the east and Lake Shinji to the west. 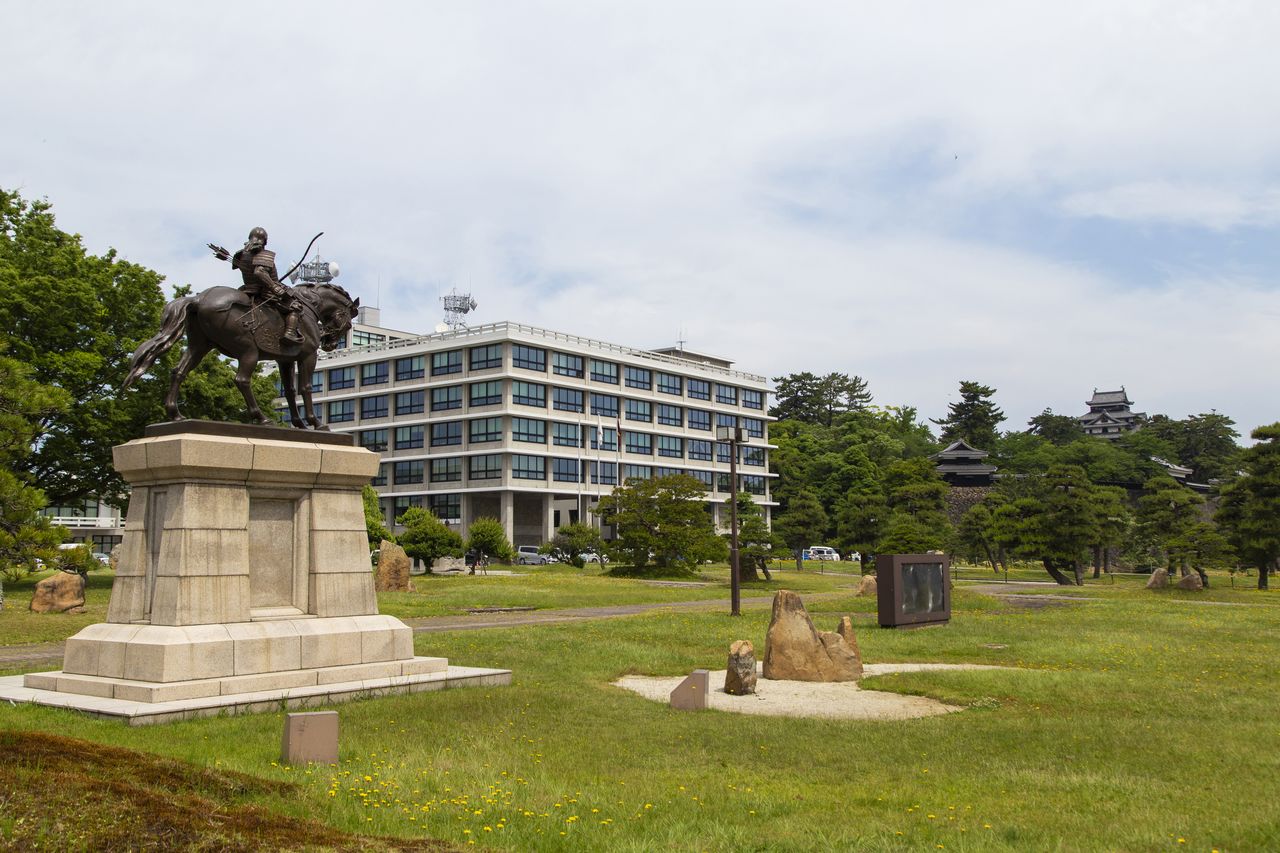 Shimane prefectural government office and Matsue Castle in the distance. 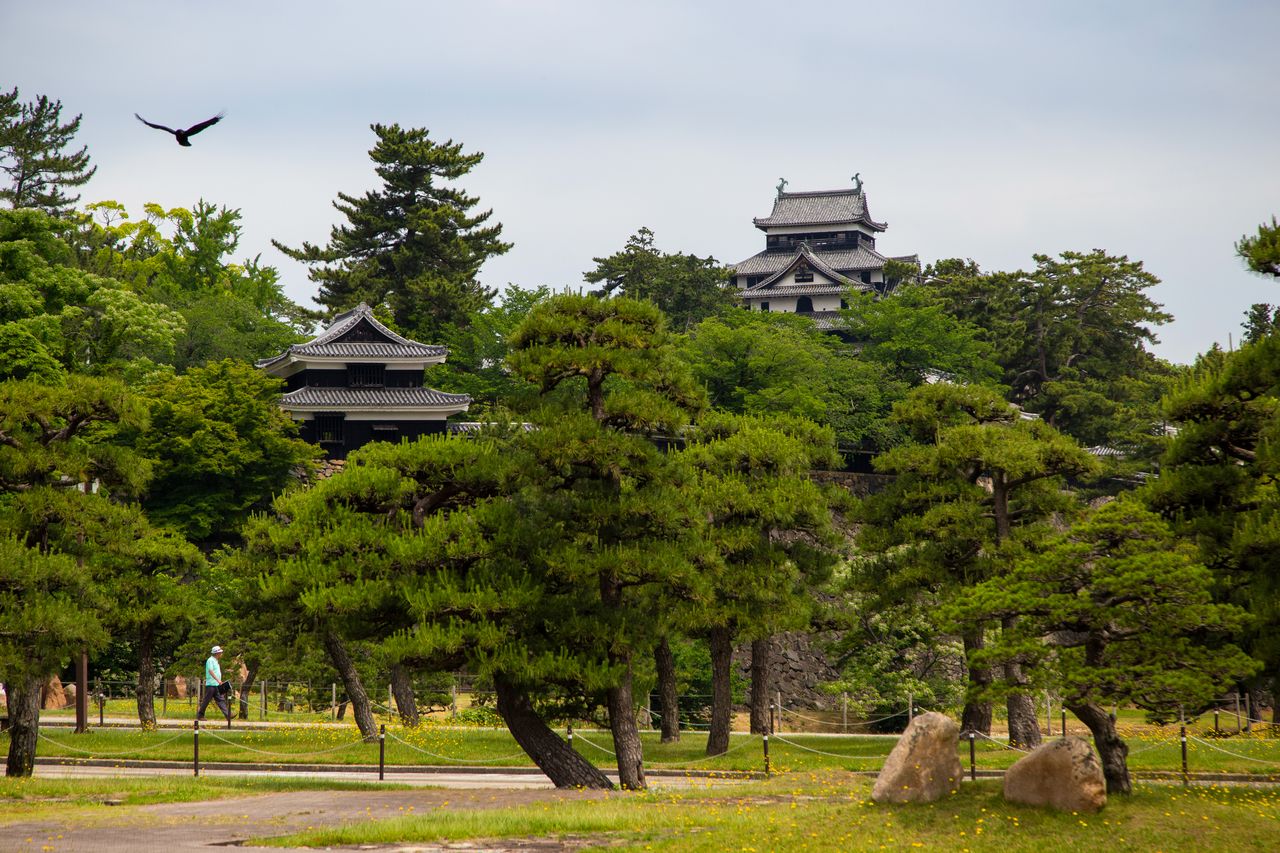 The main keep and southern tower of Matsue Castle.

Matsue was founded by Horio Yoshiharu (1543–1611), who also served as the first lord of the Matsue domain. A soldier in the Warring States period (1467–1568), Horio served powerful warlords Toyotomi Hideyoshi and Tokugawa Ieyasu. Following the decisive Battle of Sekigahara in 1600, he joined his son Tadauji, who was appointed lord of Izumo and Oki Provinces, at Gassantoda Castle, an ancient mountain keep to the south. Yoshiharu saw greater potential in Matsue’s wealth of water resources, and following Tadauji’s untimely death, he oversaw the construction of Matsue Castle and surrounding town.

Matsue eventually came under the control of Matsudaira clan, who ruled for 10 generations. During this period the settlement grew into a prosperous castle town, developing its own distinctive culture that rivaled those of Kyoto and Kanazawa. As the arts flourished, a local variation of the tea ceremony developed and artisans created new styles of Japanese confectionary, or wagashi. Flamboyant festivals like the Hōran En’ya also date from this time. 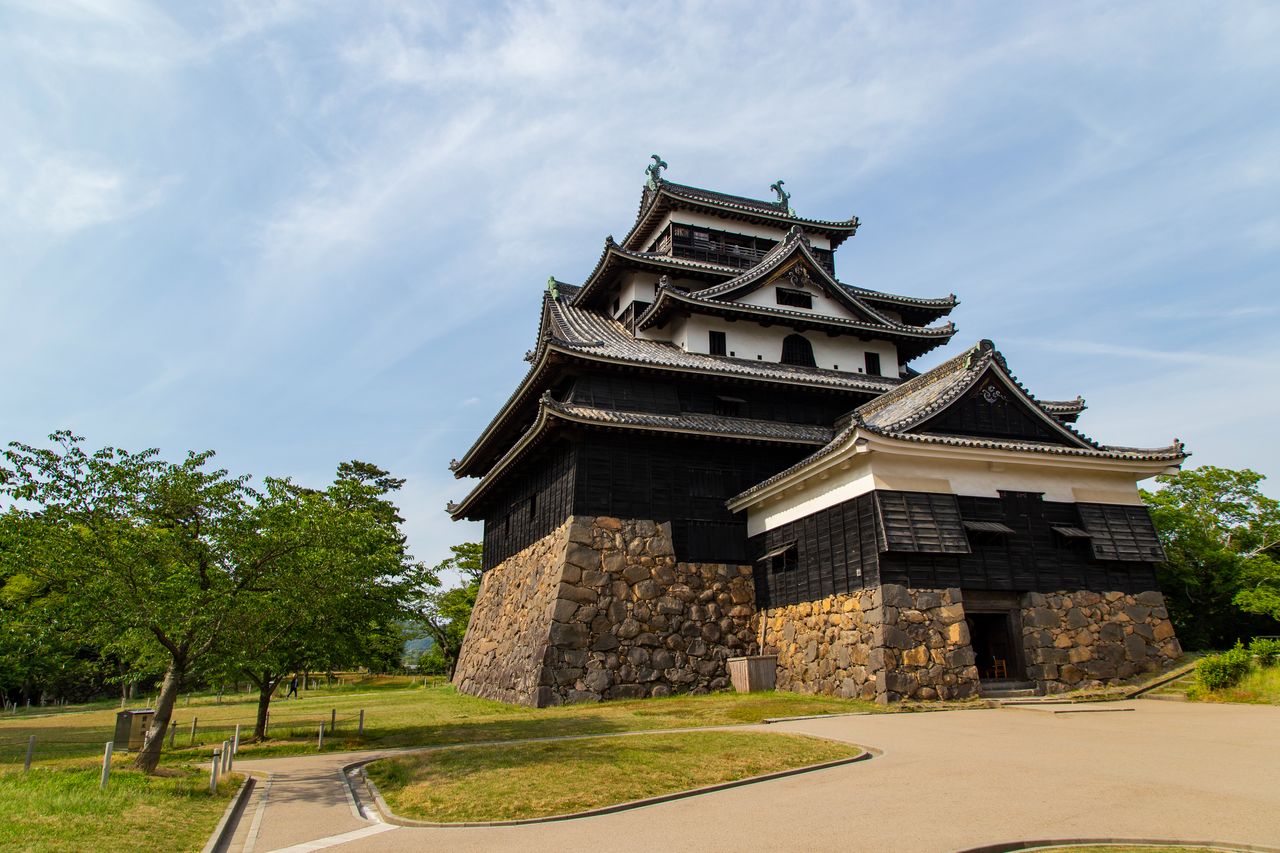 The main keep of Matsue Castle stands atop the low rise of Mount Kameda. 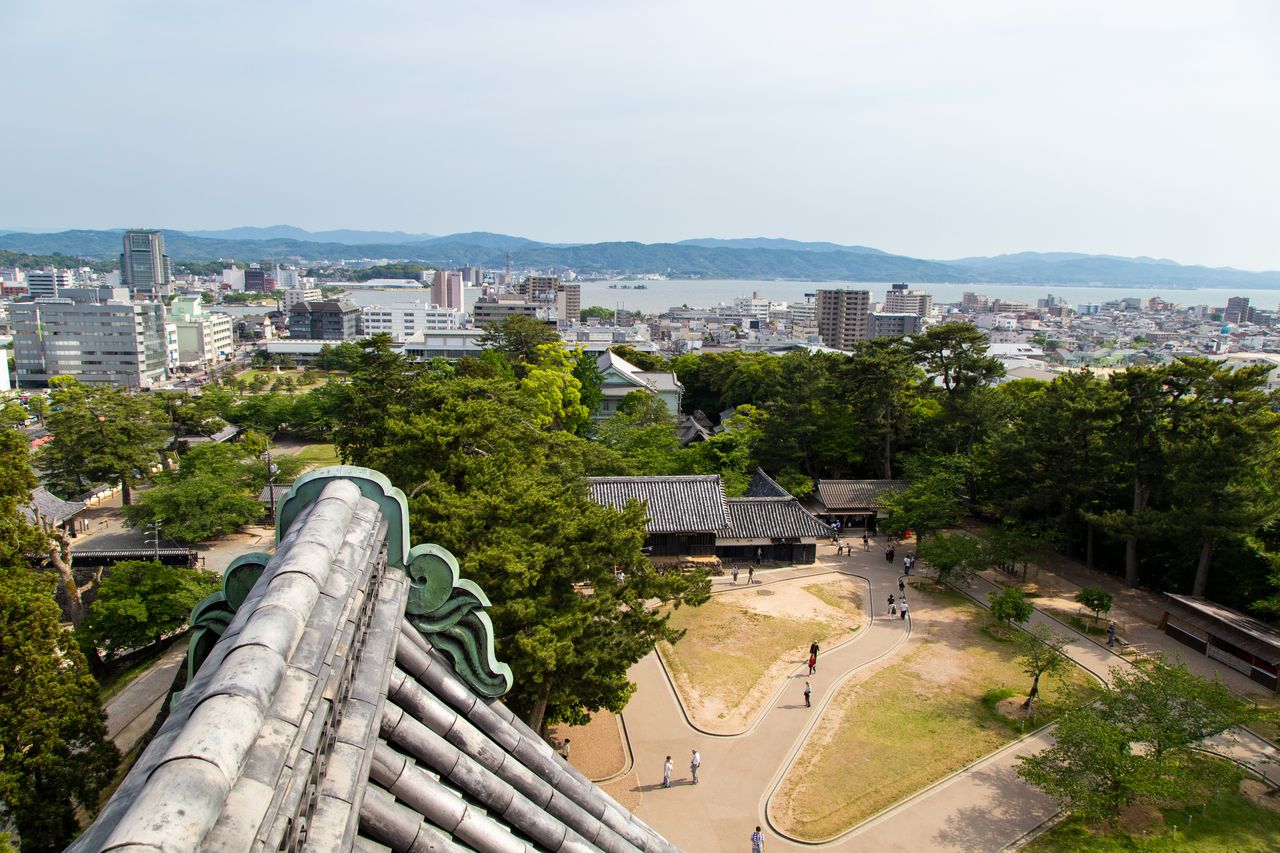 Lake Shinji and distant mountains are visible from the viewing deck of Matsue Castle.

Matsue Castle is one of only 12 surviving pre-modern castles in Japan and the only one in the San’in region. It is nicknamed “Plover Castle” because of its distinctive half-hipped gables that bring to mind the outspread wings of the water-loving bird.

Another distinguishing feature is rows of large, black rain shutters known as amaōi ita along the walls, a style characteristic of castles from the Momoyama period (1568-1603). 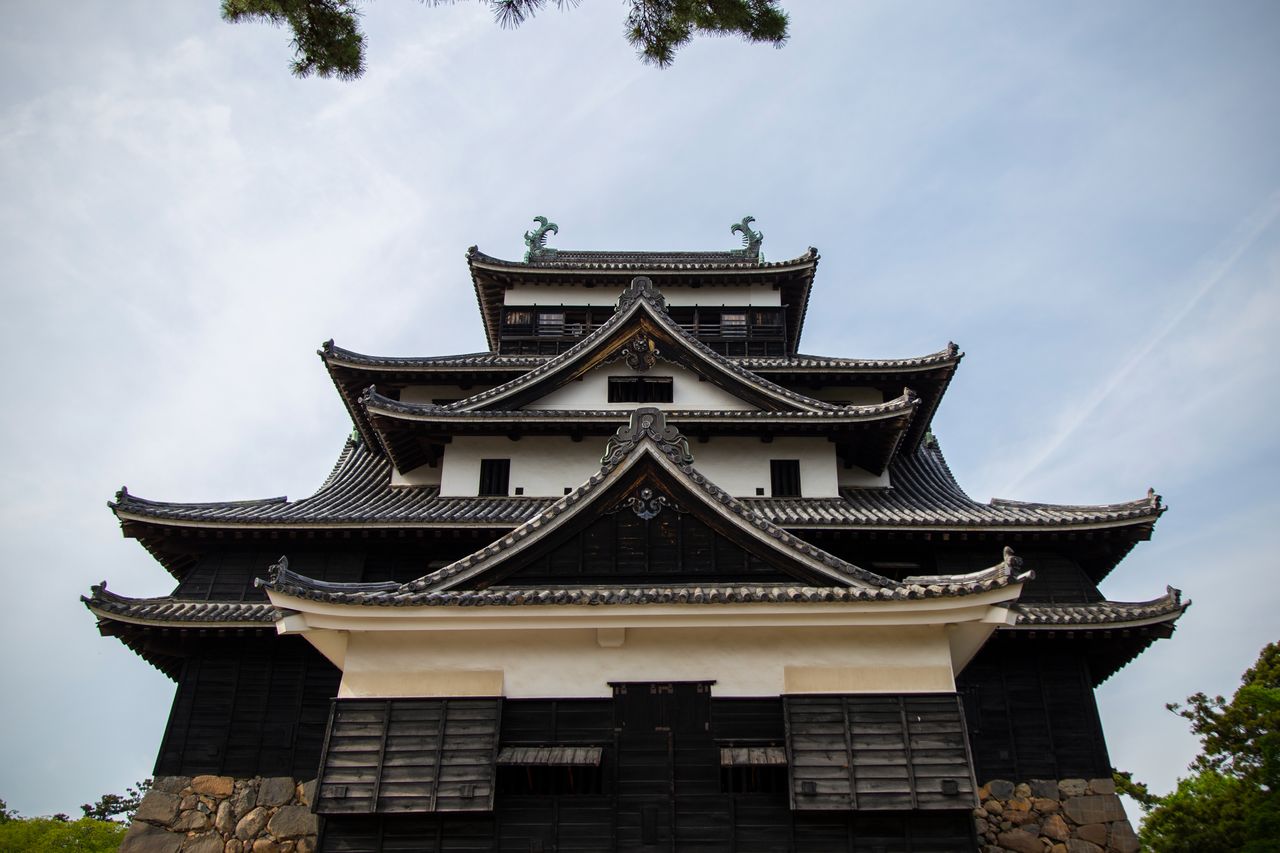 Matsue Castle boast an impressive history, but in 1950 it lost its status as a national treasure after a new law came into force that required historic structures to have substantiated evidence of the era they were built, which the keep lacked. Shocked by the delisting, city officials made every effort over the ensuing decades to restore the castle’s prestige, including petitioning the national government and offering rewards to citizens who could supply proof of the castle’s provenance.

These efforts paid off when in 2012 investigators uncovered invocation sheets pertaining to the building of the main keep at Matsue Shrine on the castle grounds. Dated 1611, the sheets matched places on two pillars in the cellar of the castle. Its pedigree confirmed, Matsue Castle regained its long-sought National Treasure status in 2015.

Although pleasing to look at, Matsue Castle was designed for conflict. The cellar of the central keep has spaces for storing salt and other staples. It also contains a well, the only surviving example in a pre-modern castle, that ensured defenders drinking water in the event of the castle came under siege.

Visitors touring the second to fourth floors of the keep can see other defensive features like narrow slits for archers and brattices for dropping stones on advancing enemies. There are also displays about Japanese armor and matchlock pistols as well as videos of the castle taken by aerial drones showing its ramparts and other outer defenses.

The fifth story of the building is an old-fashioned lookout that gives an unobstructed, panoramic view of the surrounding city and countryside. The spectacular view is protected by a city ordinance stipulating that no building in the vicinity may be built taller than the castle. 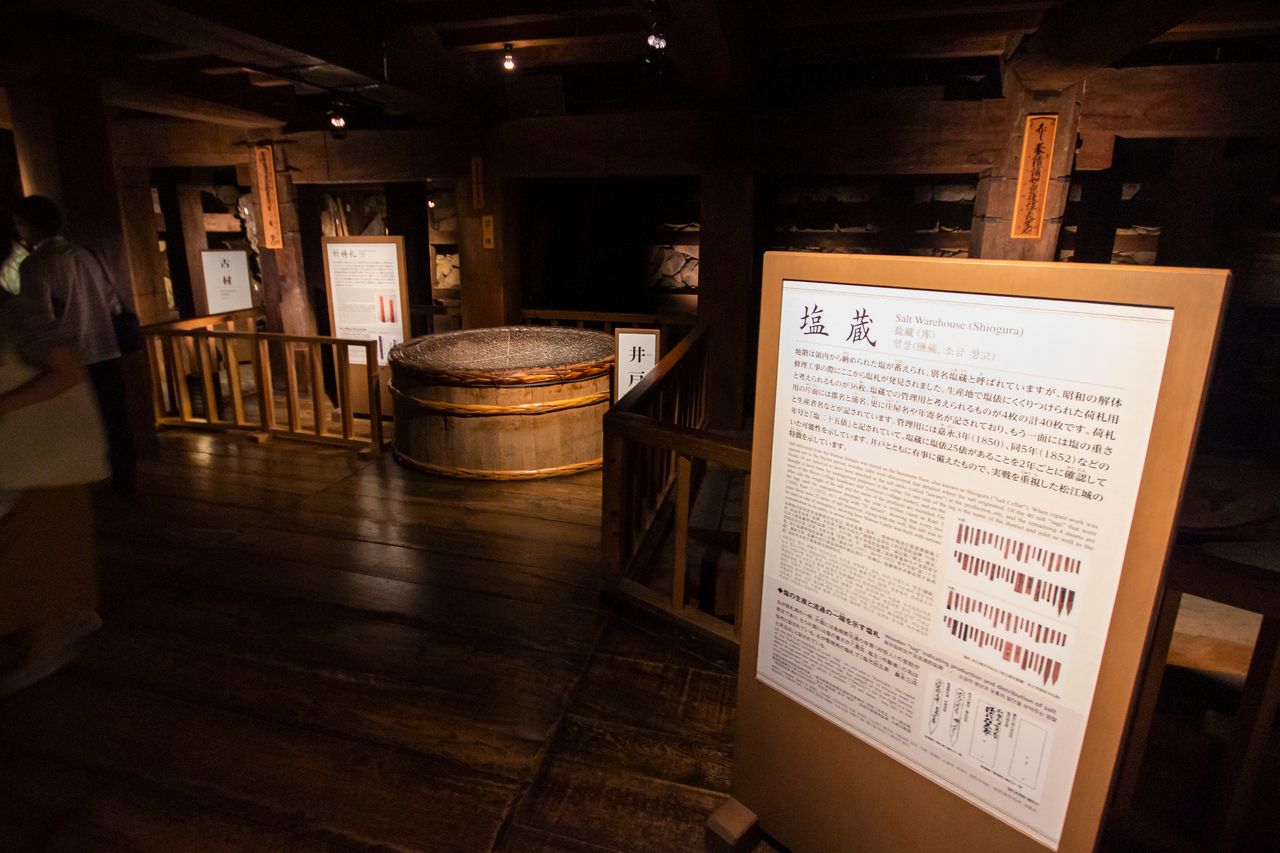 Replicas of the invocation sheets are posted on pillars in the cellar of the main keep. Between the posts is the 24-meter deep well. 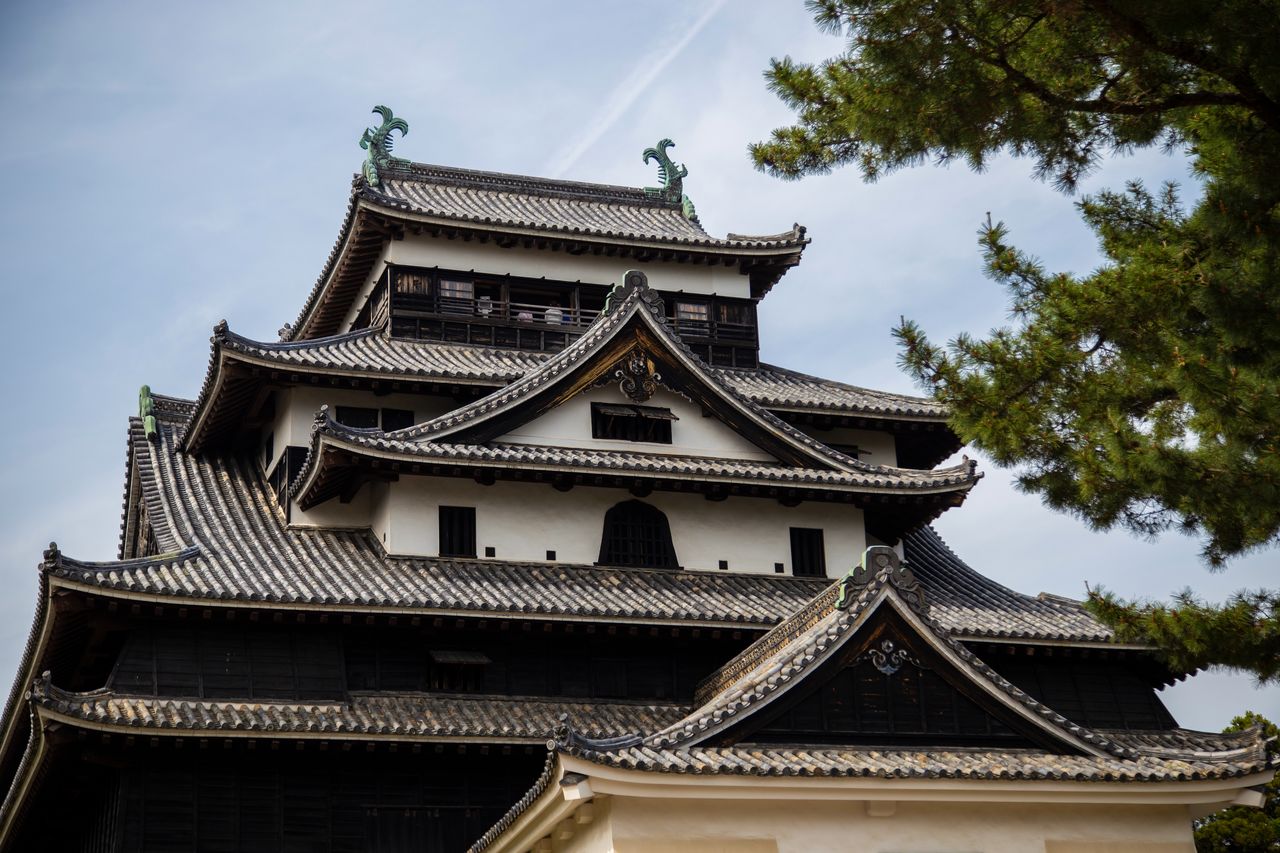 The castle lookout on the top floor and iconic half-tipped gables below. 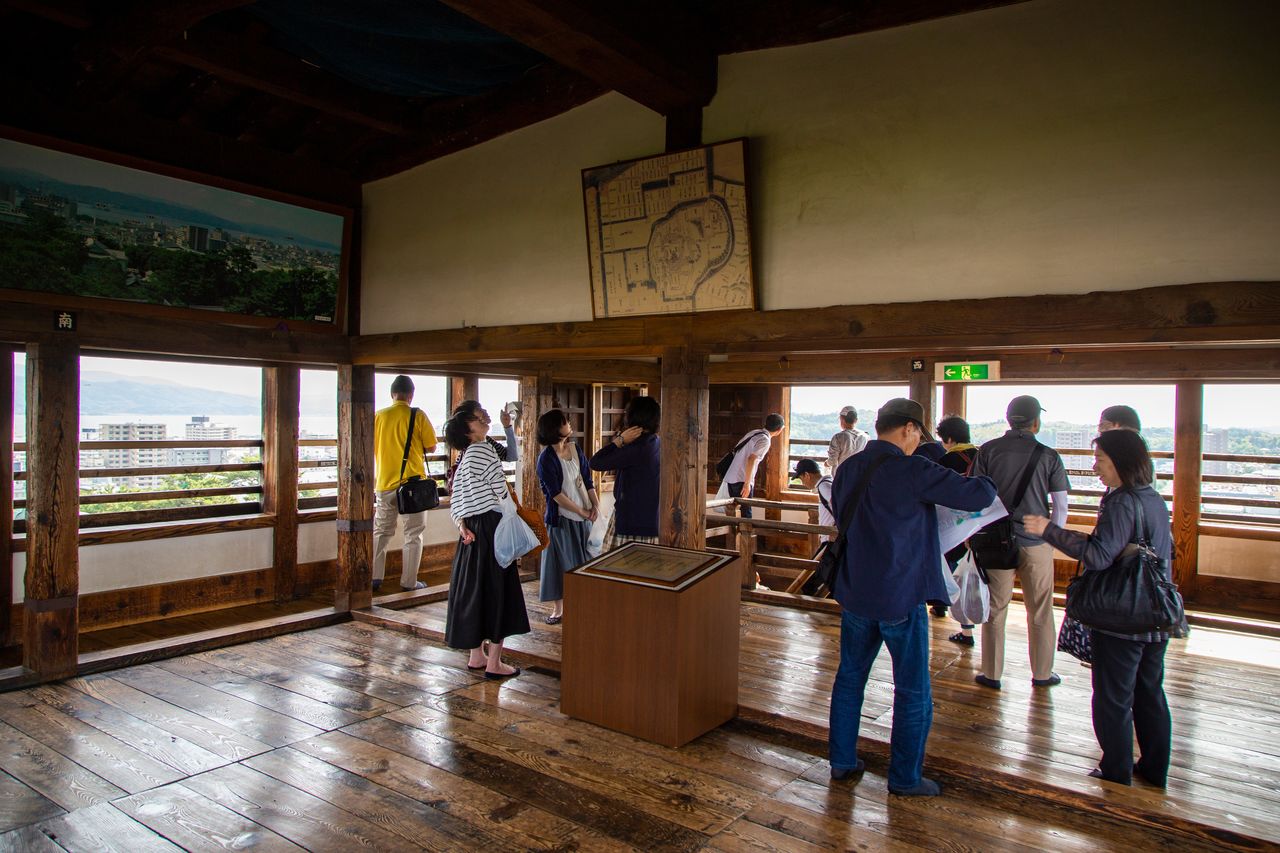 The lookout has no walls to obstruct the view, a useful feature when ascertaining enemy movements.

Many of the castle’s original watch towers and other structures were sold or demolished during the Meiji era (1868–1912). However, three of these were restored in 2001. There are also numerous historic buildings in the surrounding Jōzan Park, including the Kōunkaku where Emperor Taishō stayed during his tenure as Crown Prince, Matsue Shrine, and Jōzan Inari Shrine. The castle grounds some 360 cherry trees and is considered among the top 100 sites in Japan for blossom viewing. 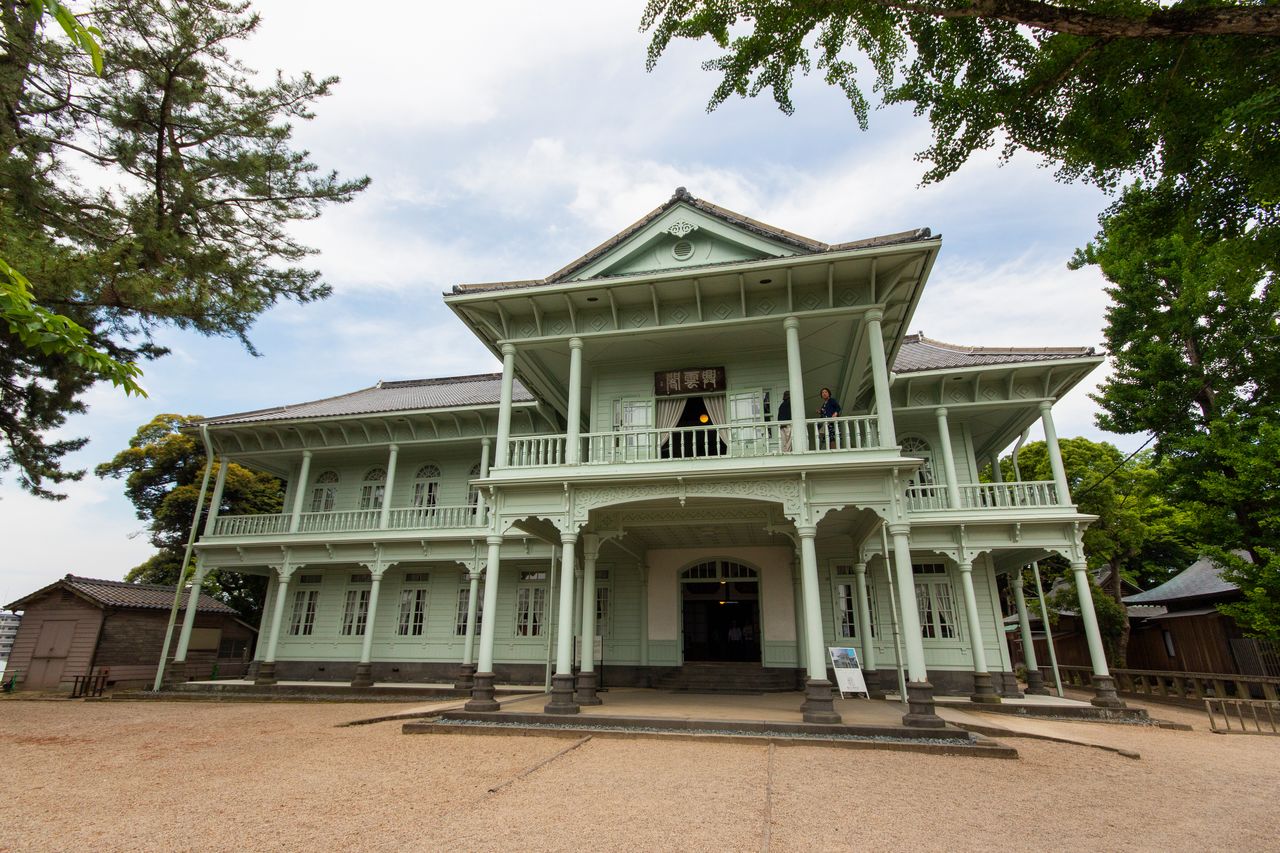 Constructed in 1903, the Kōunkaku is an exquisite example of Meiji-period architecture. Visitors can enjoy coffee or tea at the Kamedayama Tearoom on the first floor. 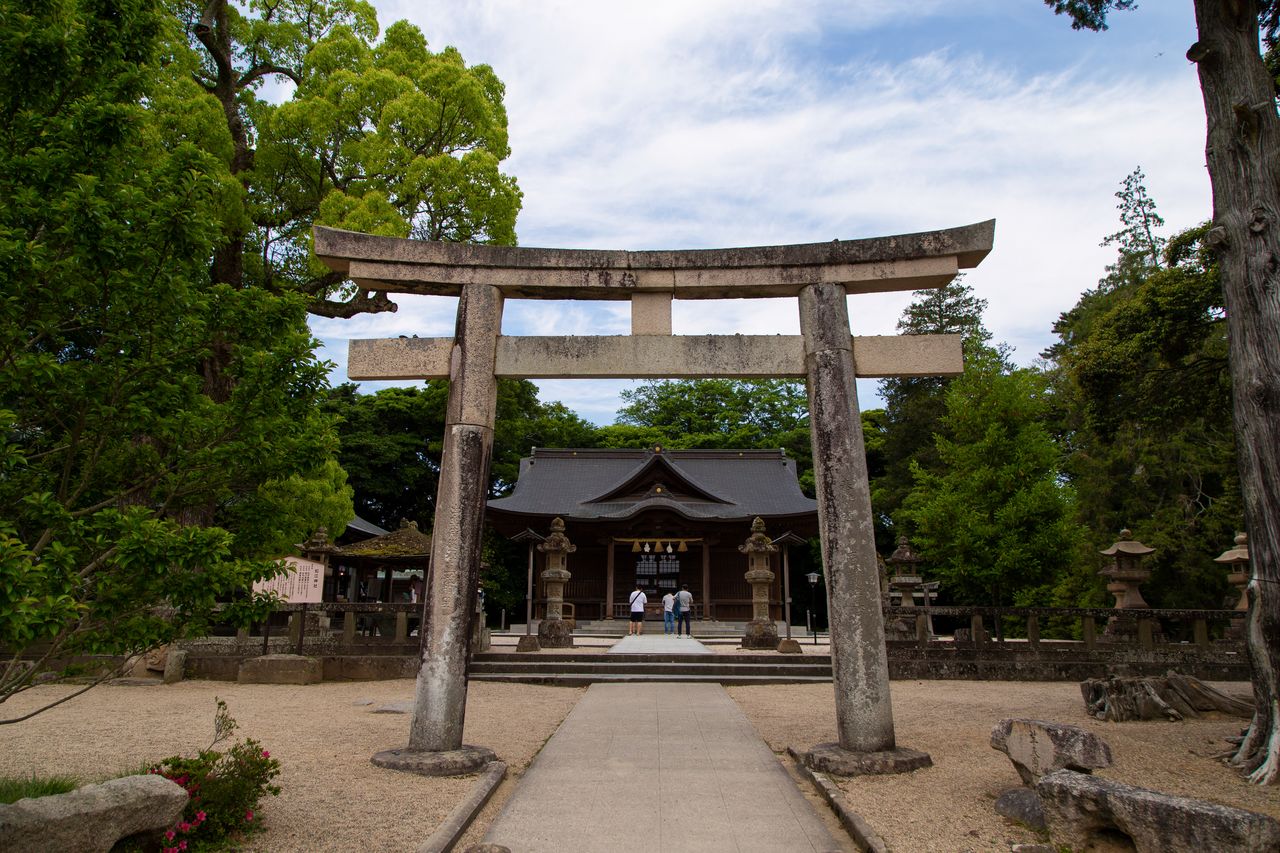 The torii and main hall of Matsue Shrine. 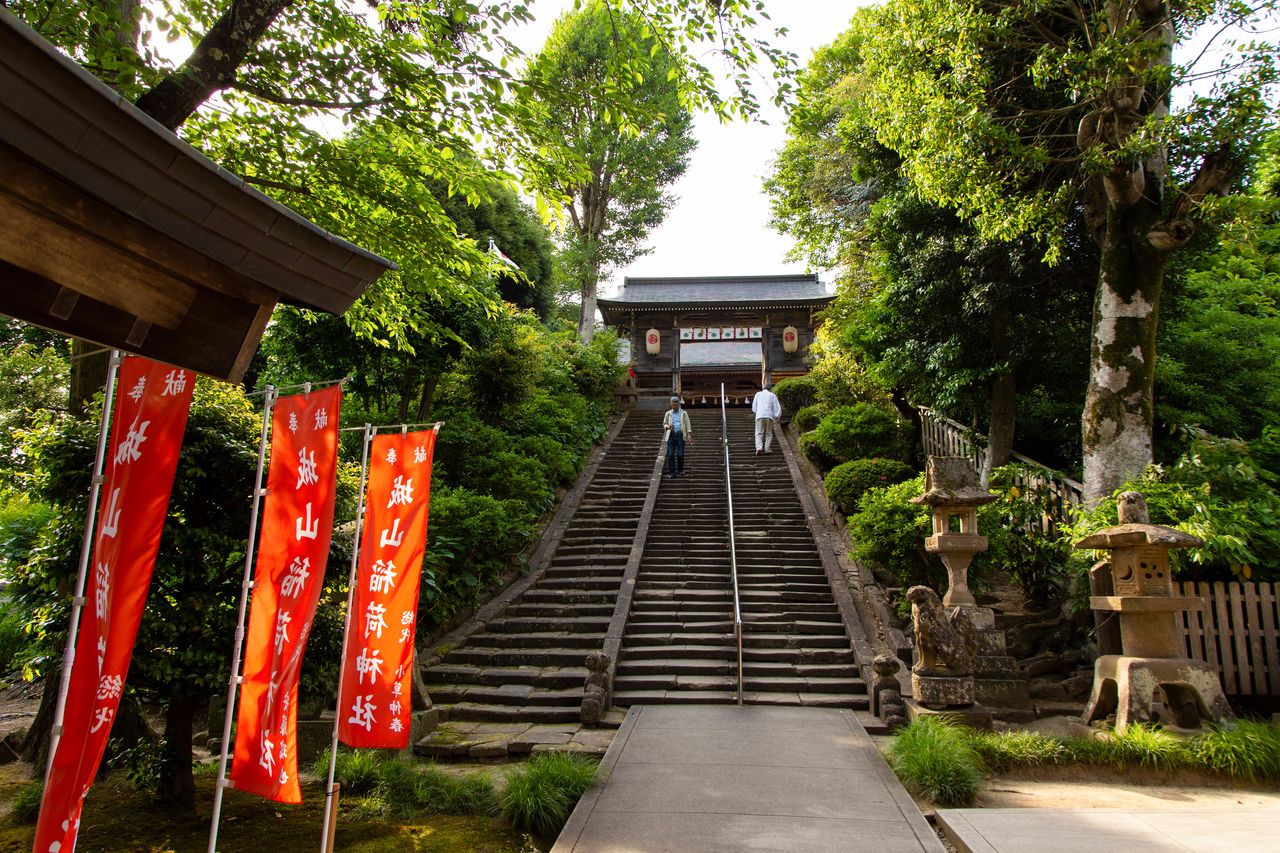 Stone step lead up to the main hall of Jōzan Inari Shrine behind the Matsue Castle. It is the starting and ending point of the Hōran En’ya festival.

As a castle town, Matsue was home to a large population of samurai warriors who served the local feudal lord. Many of these warriors lived along Shiomi-nawate, a street that runs parallel to a canal on the north side of the castle. Named for Shiomi Kohē, an elder of the Matsue clan, the historic road is lined with former samurai residences, or bukeyashiki. One of these is said to be where Shiomi himself lived. Open to the public, the residence offers a glimpse of life in Japan during the middle part of the Edo period. The grounds also contain an elegant Japanese garden along with cottages and stables. The Lafcadio Hearn Memorial Museum and the former residence of the author are in the neighborhood, as is a famed pine tree, the hāto no kuguri matsu, reputed to have matchmaking properties. 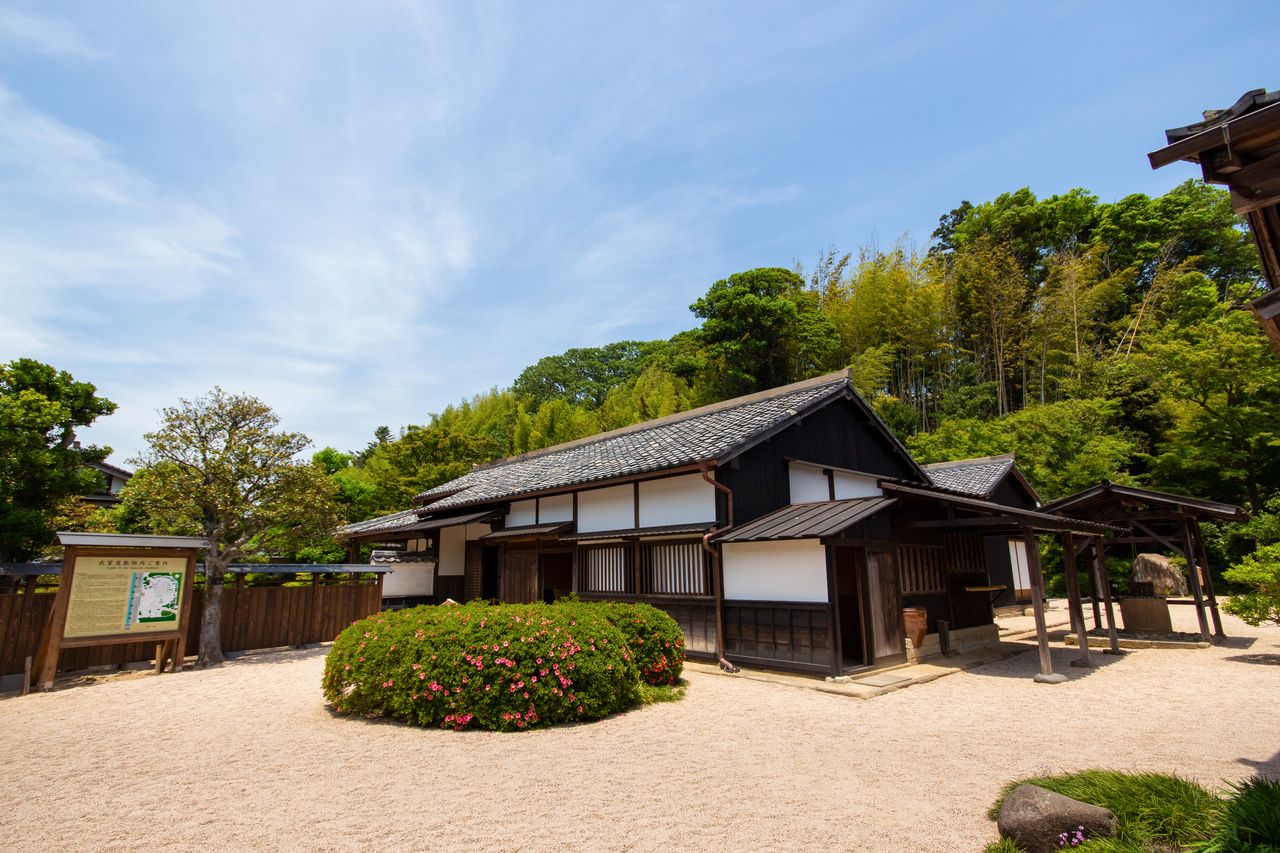 The samurai residence of Shiomi Kohē was restored in recent years according to Meiji-era plans. 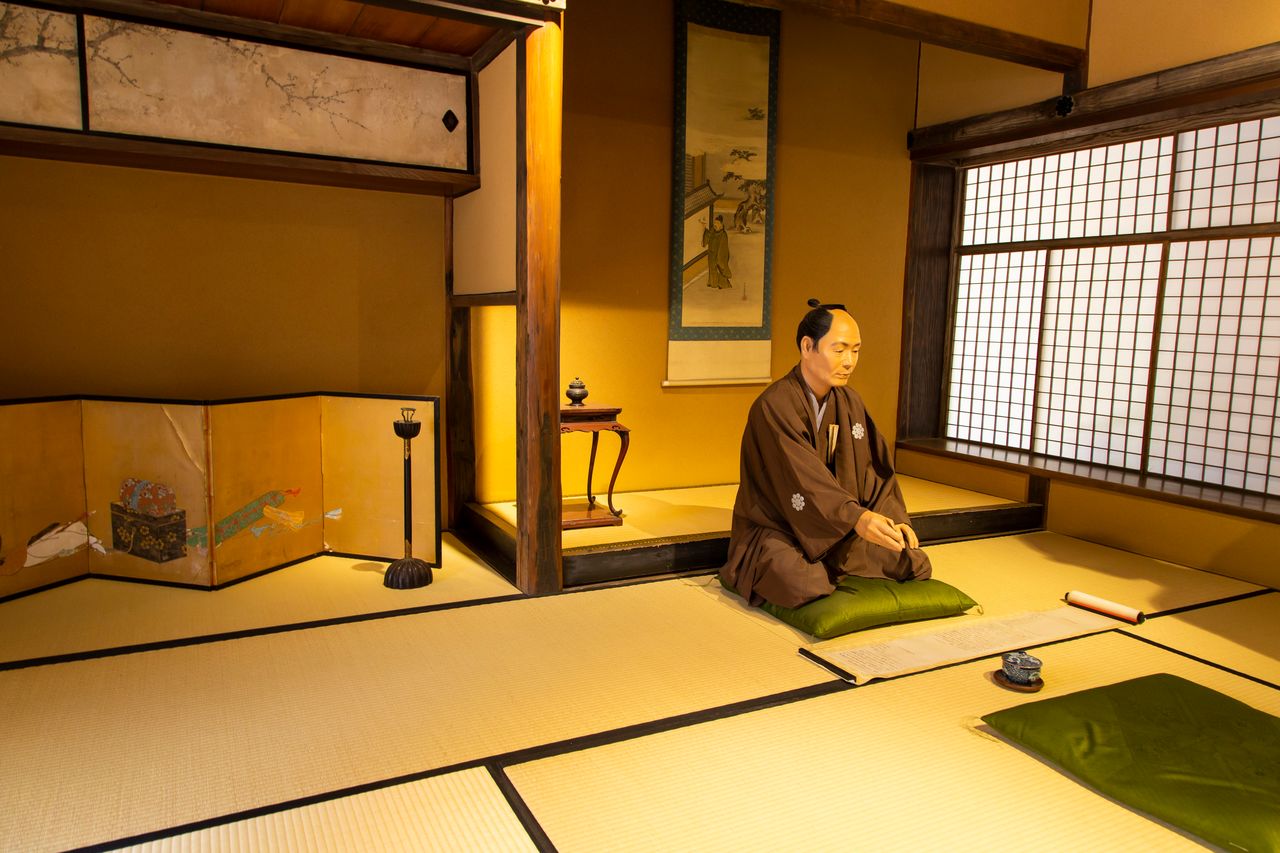 A mannequin recreates the lifestyle of a clan retainer. 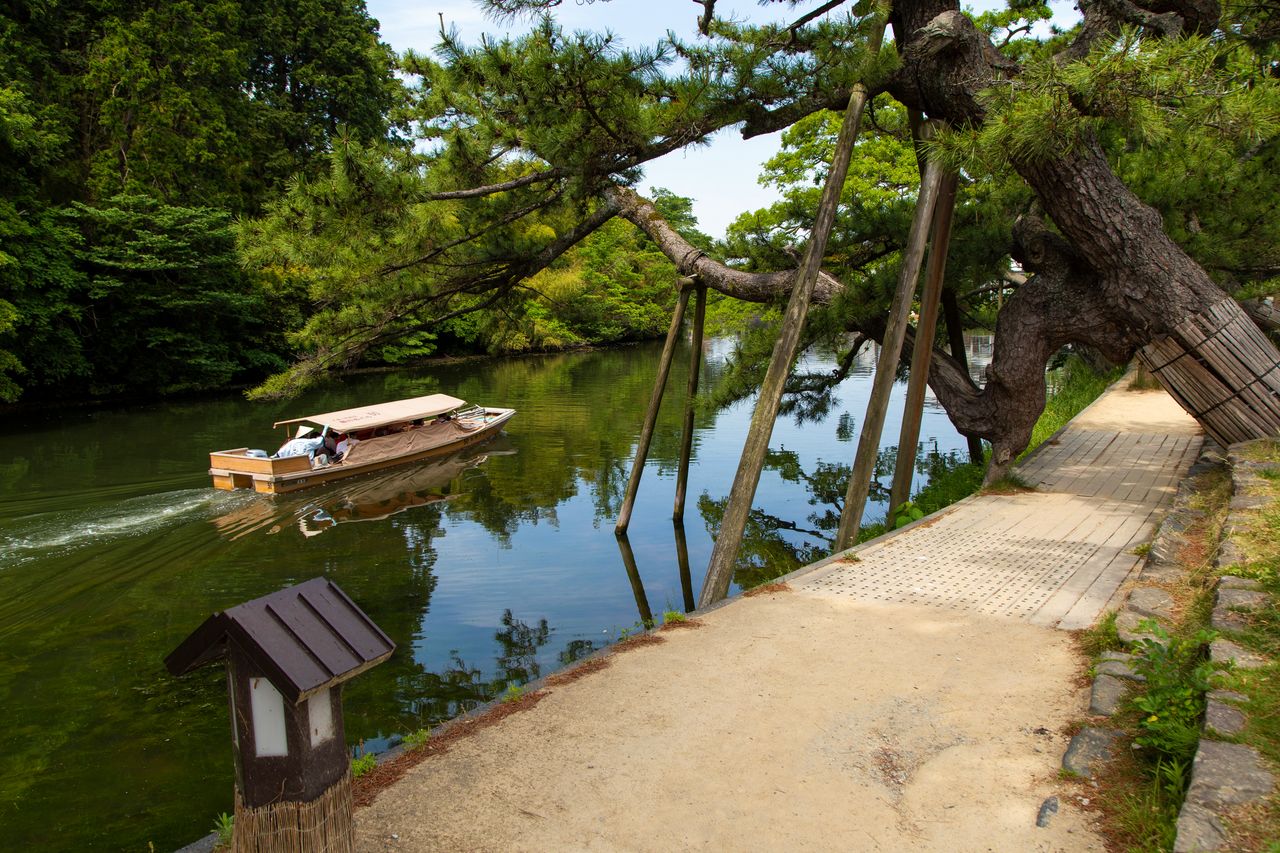