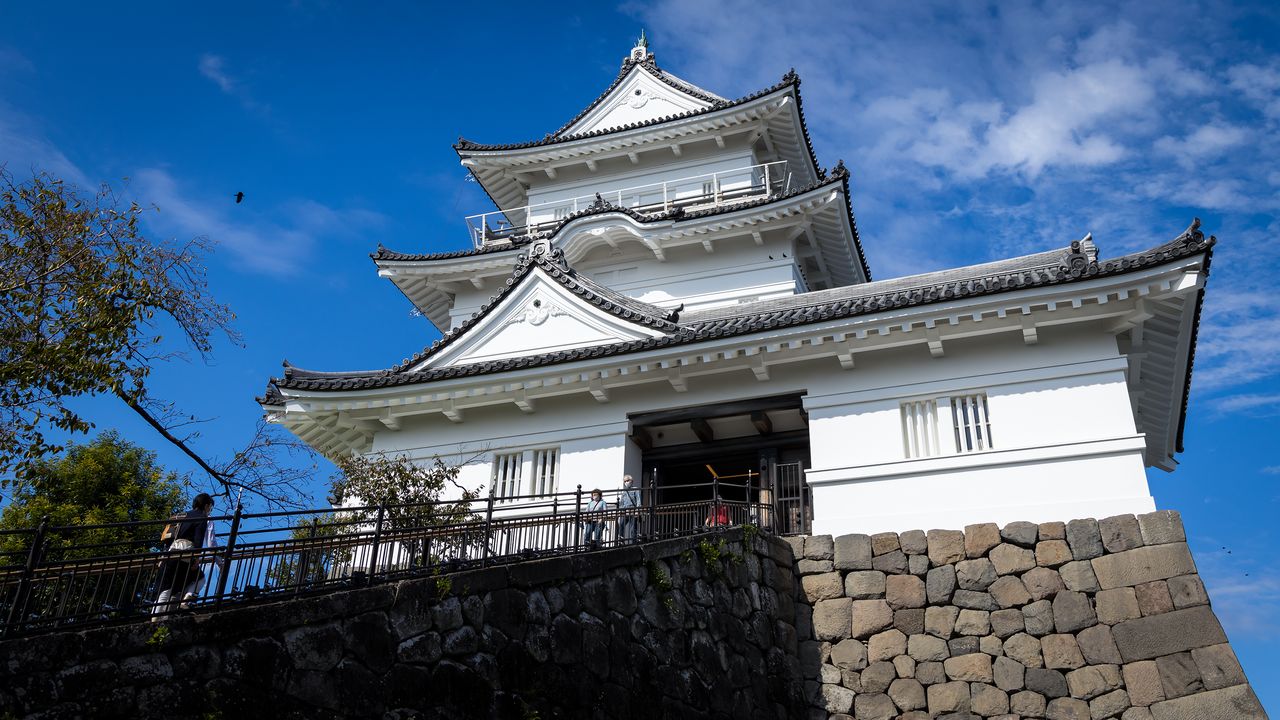 Travel History Dec 3, 2021
Odawara Castle and surrounding grounds in Kanagawa Prefecture are just a short trip from the Tokyo metropolitan area, making them ideal destinations for urban dwellers looking to get away from the bustle of the city for a day. The castle boasts a fascinating history and is also a favorite flower-viewing spot.

Odawara Castle in Odawara, Kanagawa Prefecture, was once the seat of the powerful Hōjō clan, who controlled the Kantō region during the Warring States period (1467–1568). The tenshukaku, the central keep, is the tallest in eastern Japan at 27.2 meters high. Major renovations completed in 2016 have returned the castle to its previous splendor.

Odawara Castle’s renown spread after a successful siege by warlord Toyotomi Hideyoshi in 1590 brought down the Hōjō clan. But the castle’s precincts today are a reproduction of its appearance toward the end of the Edo period (1603–1868), when Japan was ruled by the Tokugawa shogunate. As testament to this, the roof tiles of the honmaru, the main compound, and the castle gates bear the triple hollyhock crest of the Tokugawa clan. 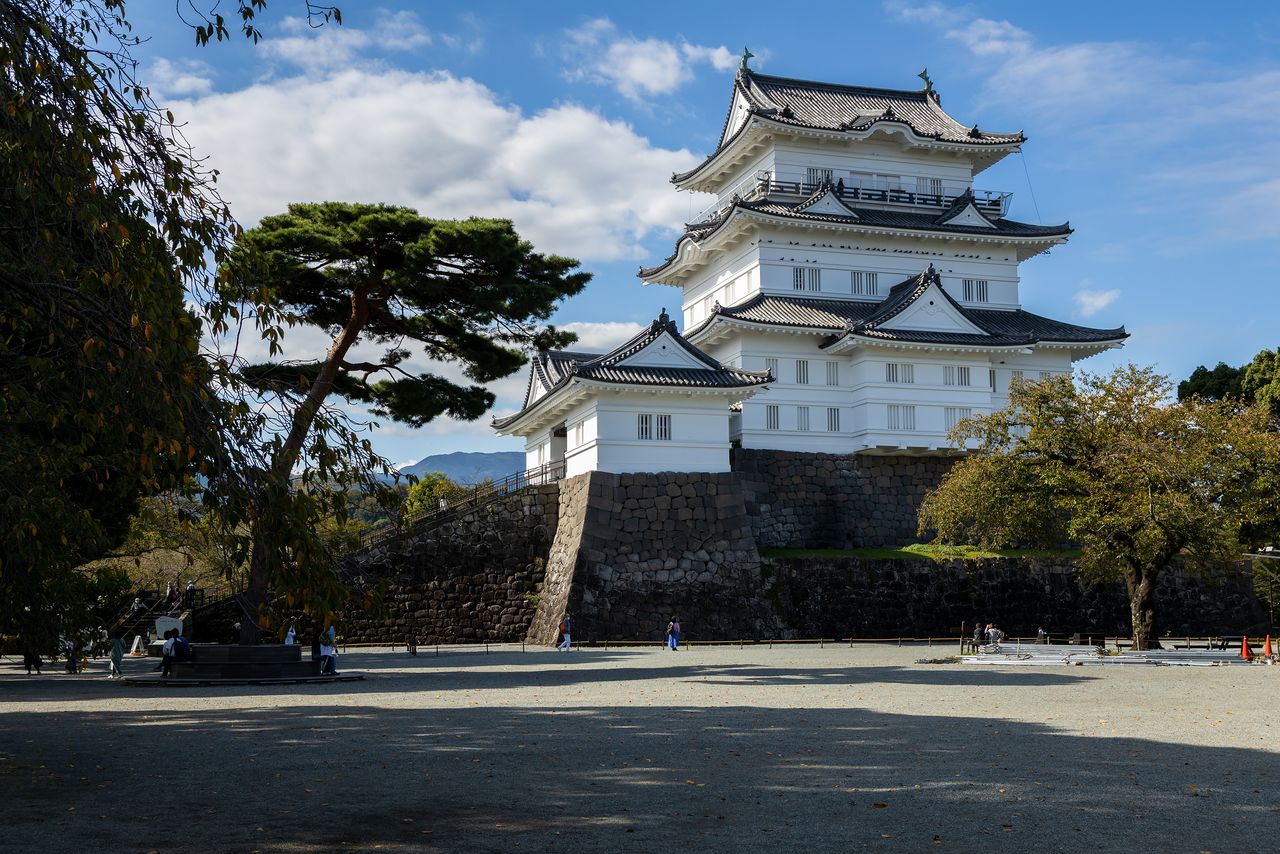 The central keep, rising beyond the main compound, gleams after major renovations in 2016. 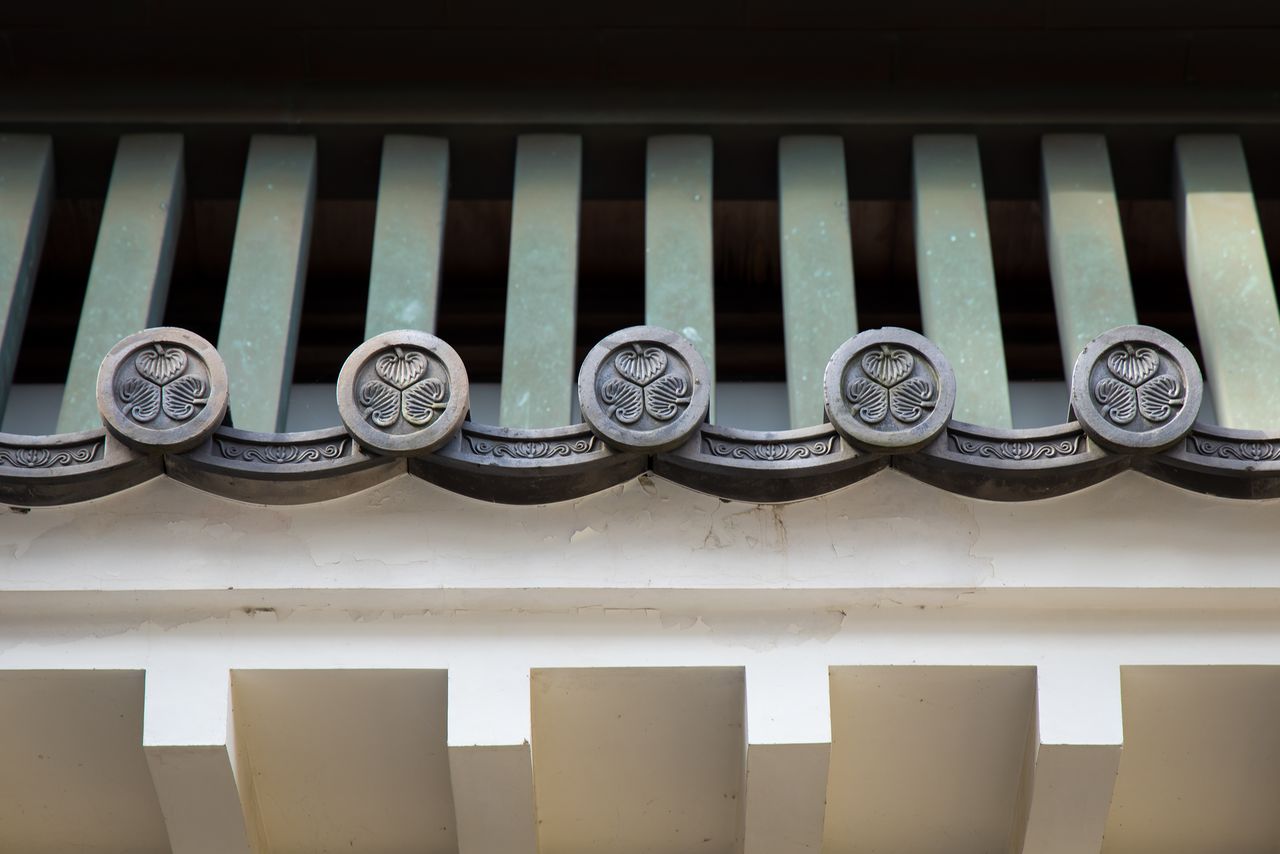 The roof tiles of the Tokiwagi Gate entrance to the main compound display the triple hollyhock of the Tokugawa clan. 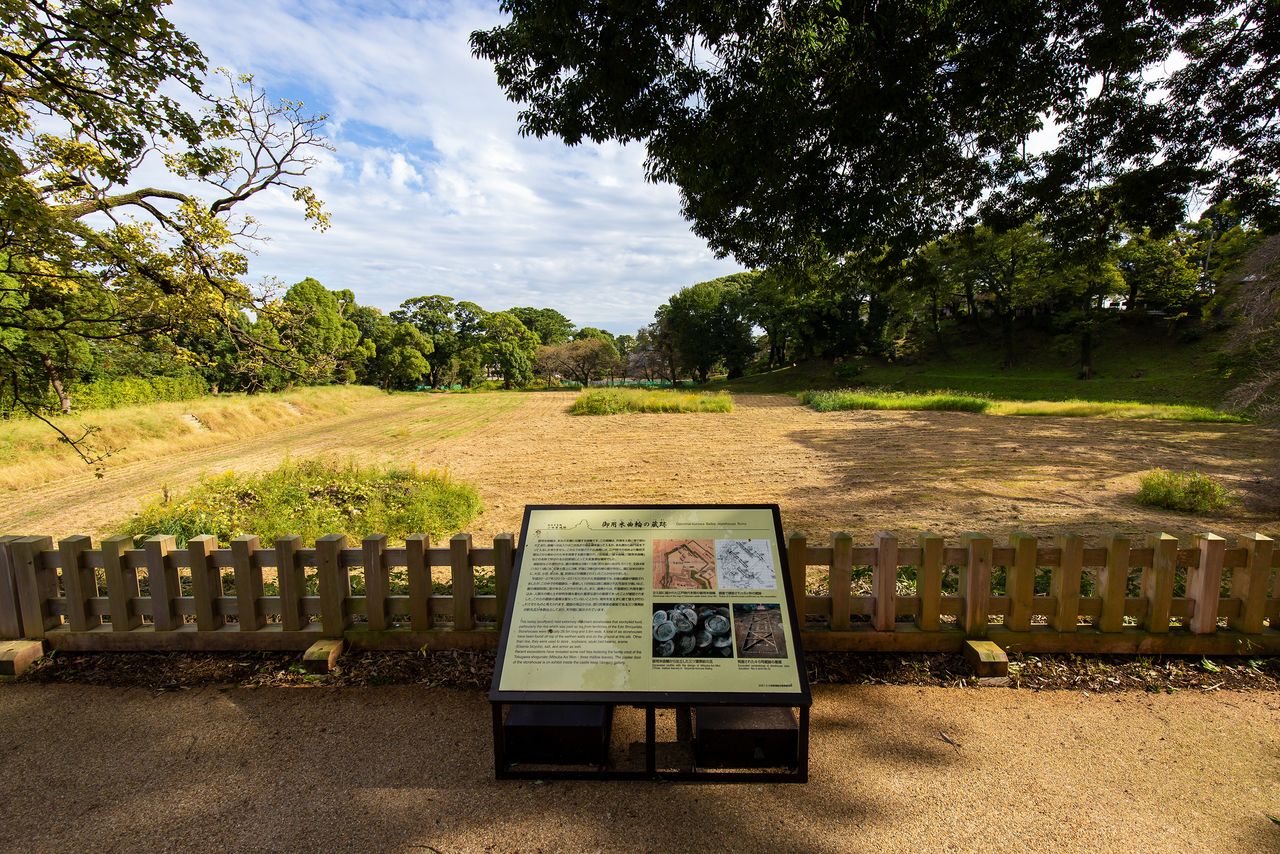 The former site of rice storehouses of the Edo shogunate on the north side of the main compound.

From Impregnable Fortress to Defender of Kantō

Odawara Castle dates from the mid-fifteenth century, although the exact date of its construction is unclear. The castle precinct and adjoining castle town were built by Ise Sōzui (later known as Hōjō Sōun), who belonged to the Odawara Hōjō, a powerful clan that expanded its influence to the entire Kantō region.

Five generations of the Hōjō family occupied the castle, which came to be known as an impregnable fortress for having successfully repelling attacks by formidable warlords Uesugi Kenshin and Takeda Shingen. When Hideyoshi threaten to attack, the castle strengthened its defenses, adding moats and earthen walls to encircle the castle town. Those defenses, totaling nine kilometers in length, largely demarcate the city limits of modern-day Odawara. 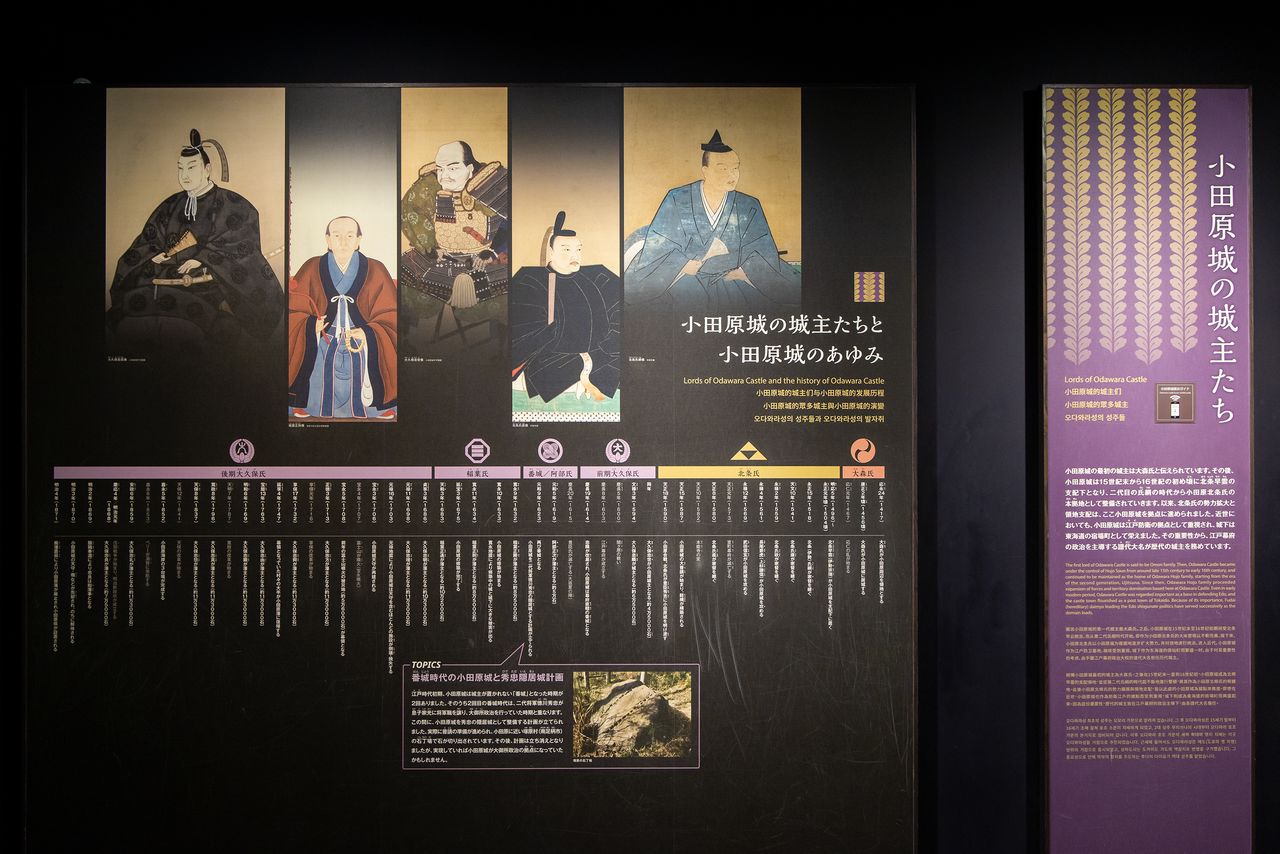 An exhibition in the central keep details the history of the castle and its successive occupants.

After the siege of the castle and the defeat of the Hōjō clan, control of the Kantō region was given to Tokugawa Ieyasu, marking the start of the Edo period. Odawara Castle was granted to Ieyasu’s chief retainer Ōkubo Tadayo, whose clan held the castle, except for a brief period, up to the fall of the Tokugawa regime. Although parts of the castle were destroyed and it was reduced in size, it oversaw the Hakone barrier, a checkpoint controlling travel between the eastern and western parts of the country, and was Kantō’s main line of defense to counter threats from the west.

After the Meiji Restoration of 1868, the incoming government ordered all castles destroyed. Odawara Castle was dismantled in 1870, leaving only its stone ramparts, which collapsed in the Great Kantō Earthquake of 1923. The central keep was rebuilt in 1960, as were other parts of the castle in later decades. Today, the castle gates, most of the main compound and the ninomaru compound, and parts of the fortifications erected by the Hōjō have been restored, with the area designated a national historic site. 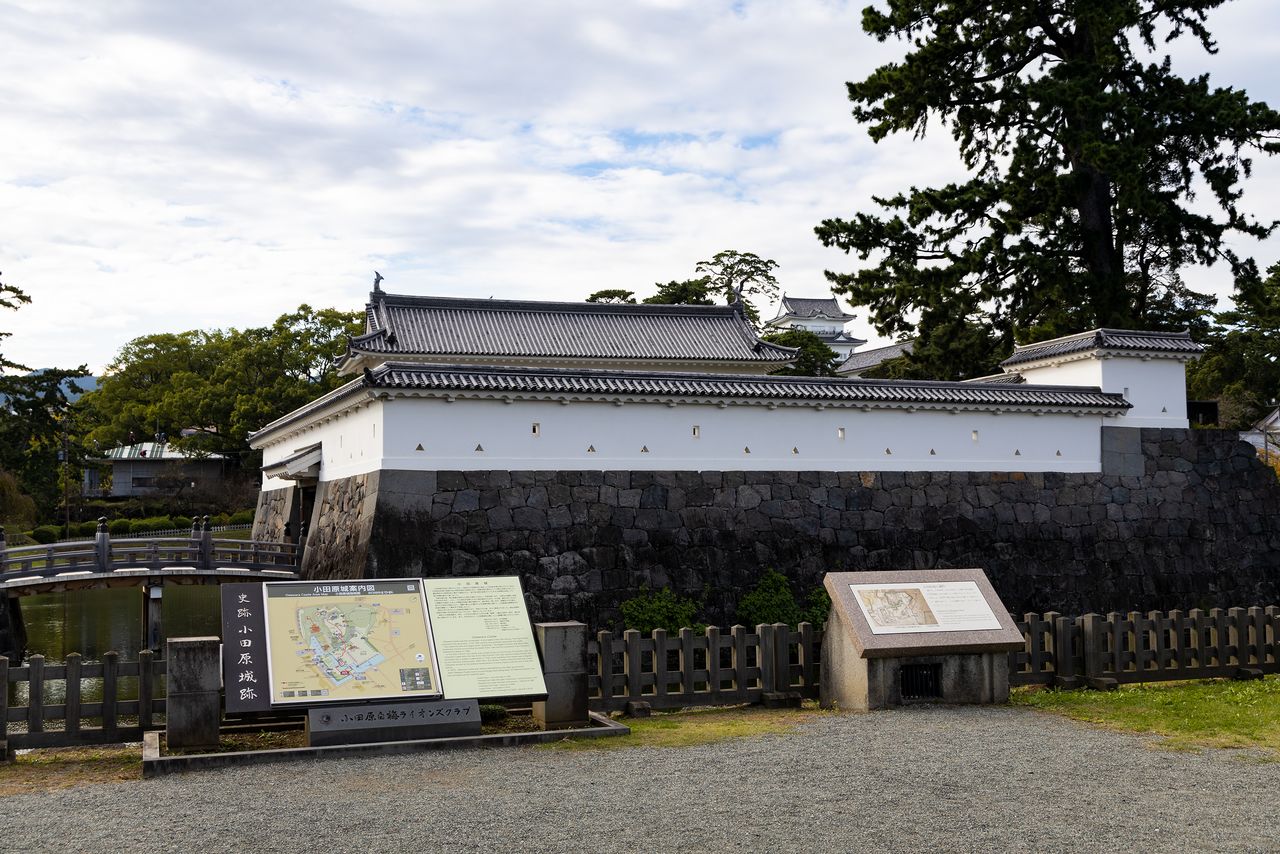 The Akagane Gate was restored in 1997. The central keep is visible in the background. 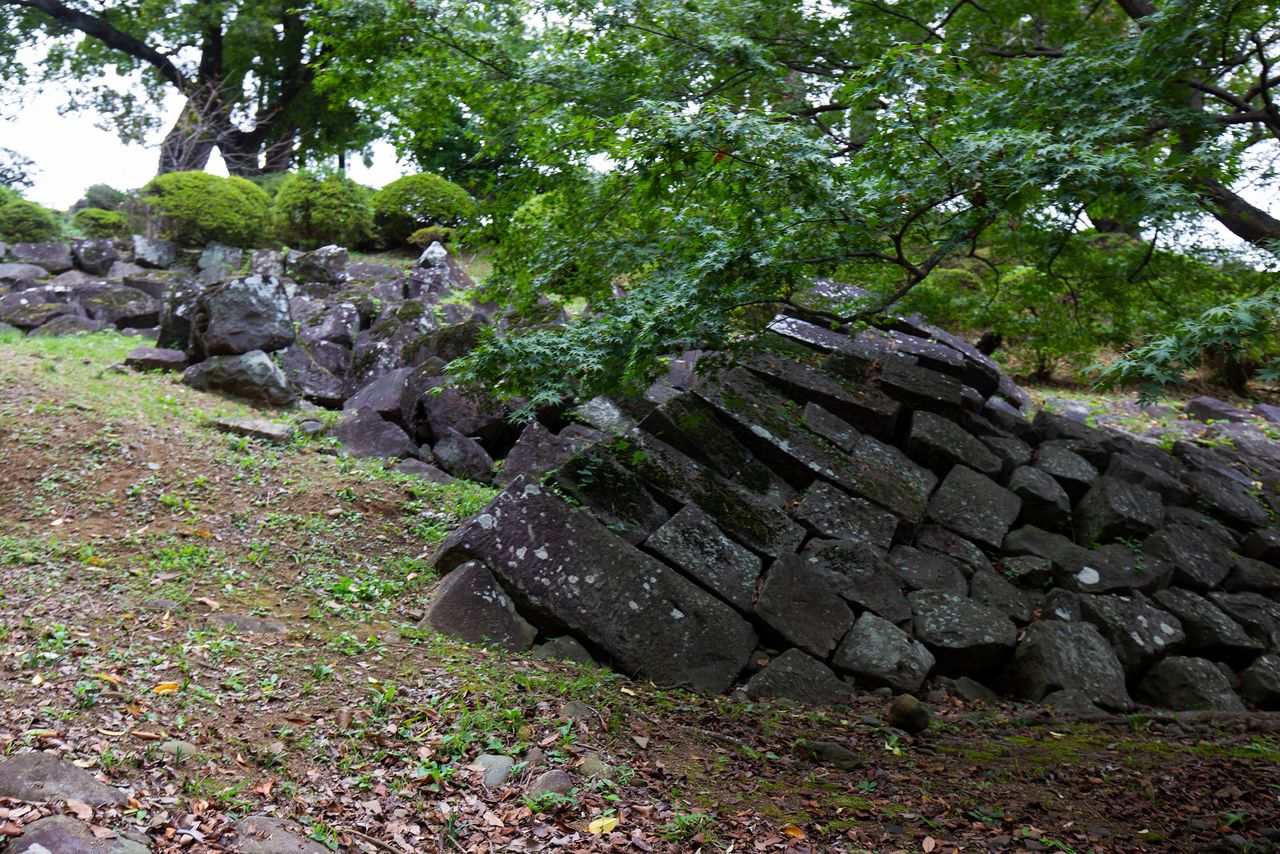 To the south of the main compound, stone ramparts that collapsed in the Great Kantō earthquake lie undisturbed.

The castle sightseeing route begins at the Umadashi Gate across Dobashi Bridge. To the north is the vermillion Manabi Bridge, a picturesque sight of moat, stone ramparts, and a corner turret. 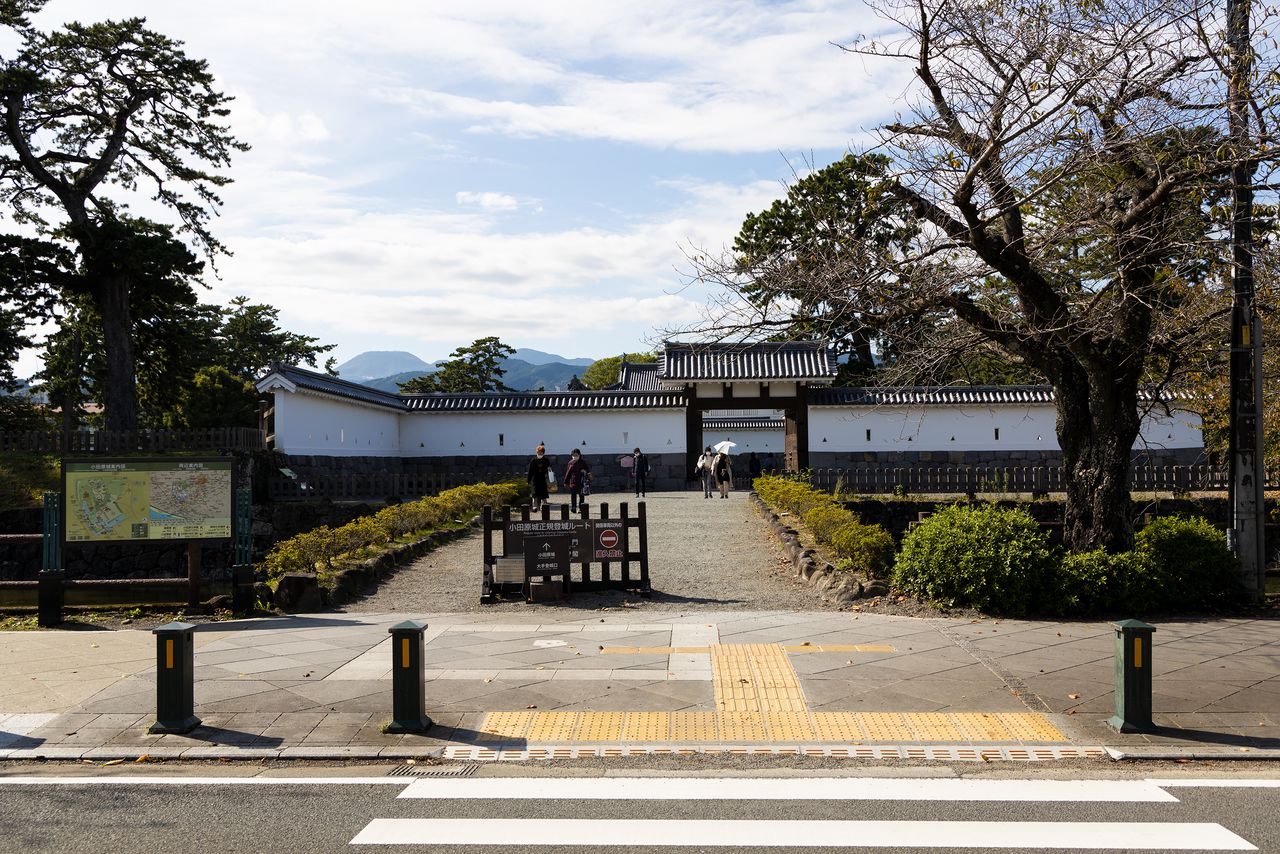 Restored in 2009, the Umadashi Gate beyond the bridge is the castle’s main entrance. 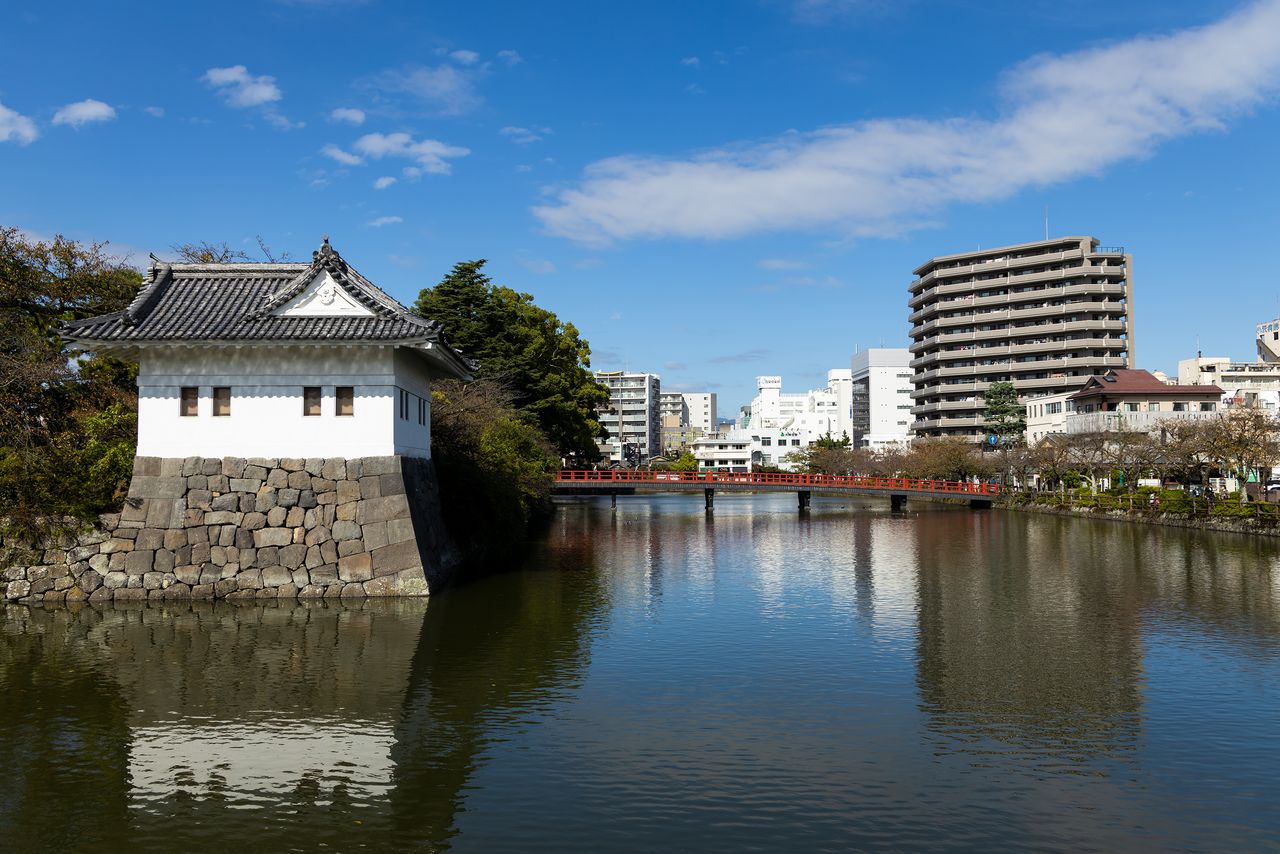 The moat and a corner turret, photographed from Umadashi Gate. Entrance to Odawara Castle Park is via Manabi Bridge seen in the background. 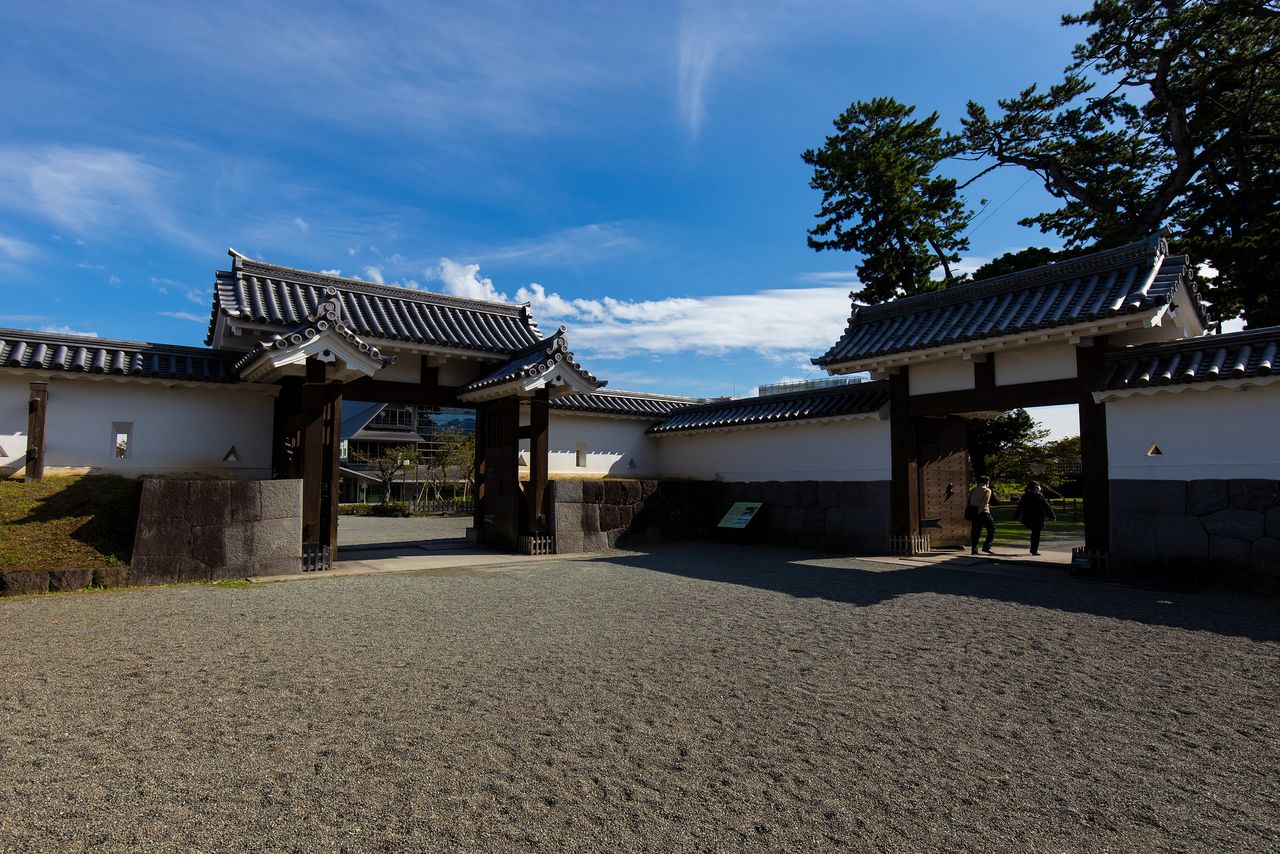 The Umadashi Gate, left, and Kabuki Gate open onto a square masugata court designed to delay attacking forces. The graveled area was also used as a gathering place for troops.

Across the Sumiyoshi Bridge is the Akagane Gate leading to the second compound. The name Akagane, meaning copper, comes from the copper fittings on the gate’s massive wooden door. This part of the castle is where the castle lord’s residence was located. After the castle was dismantled in the late nineteenth century, a residence was built in the second compound in 1901, but it was destroyed in the 1923 Great Kanto Earthquake. 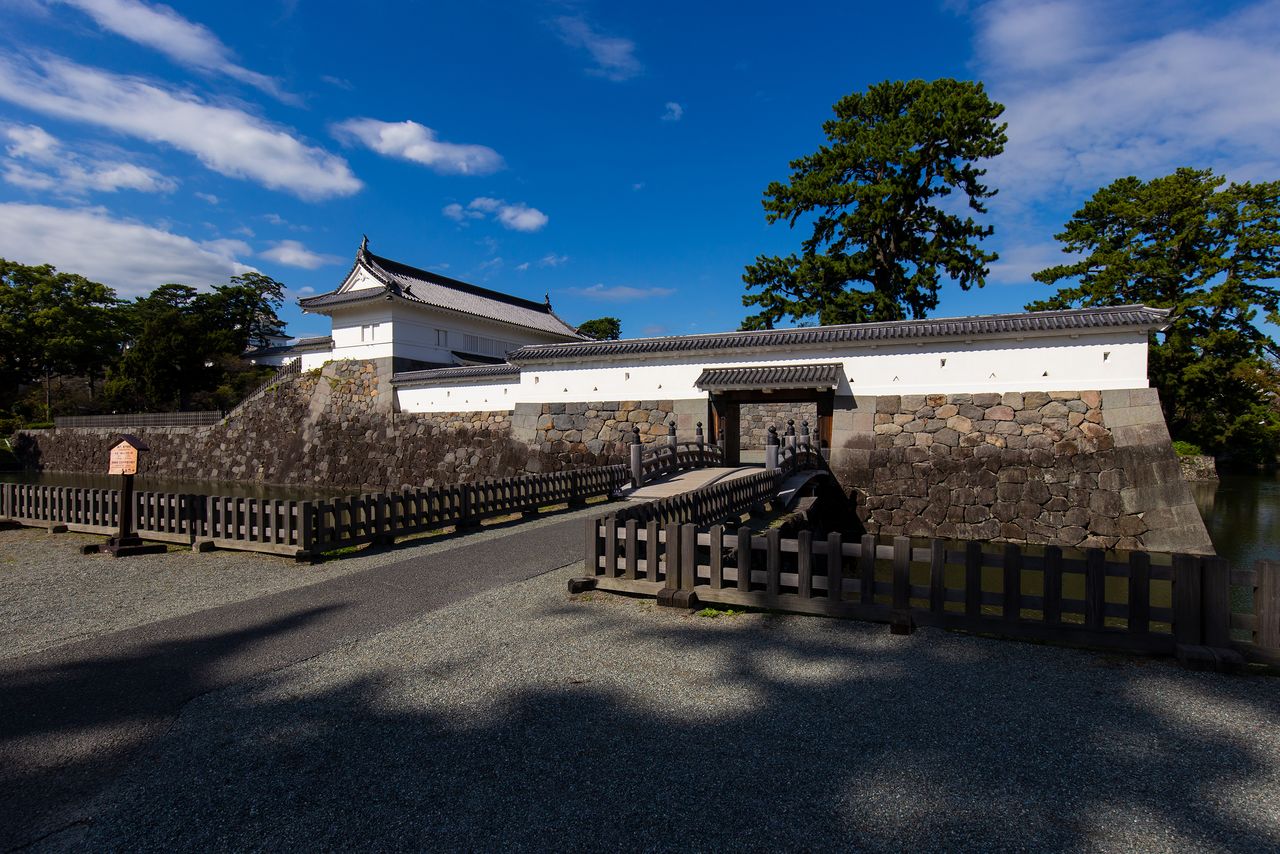 The Akagane Gate, across the Sumiyoshi Bridge, also has a square masugata court. 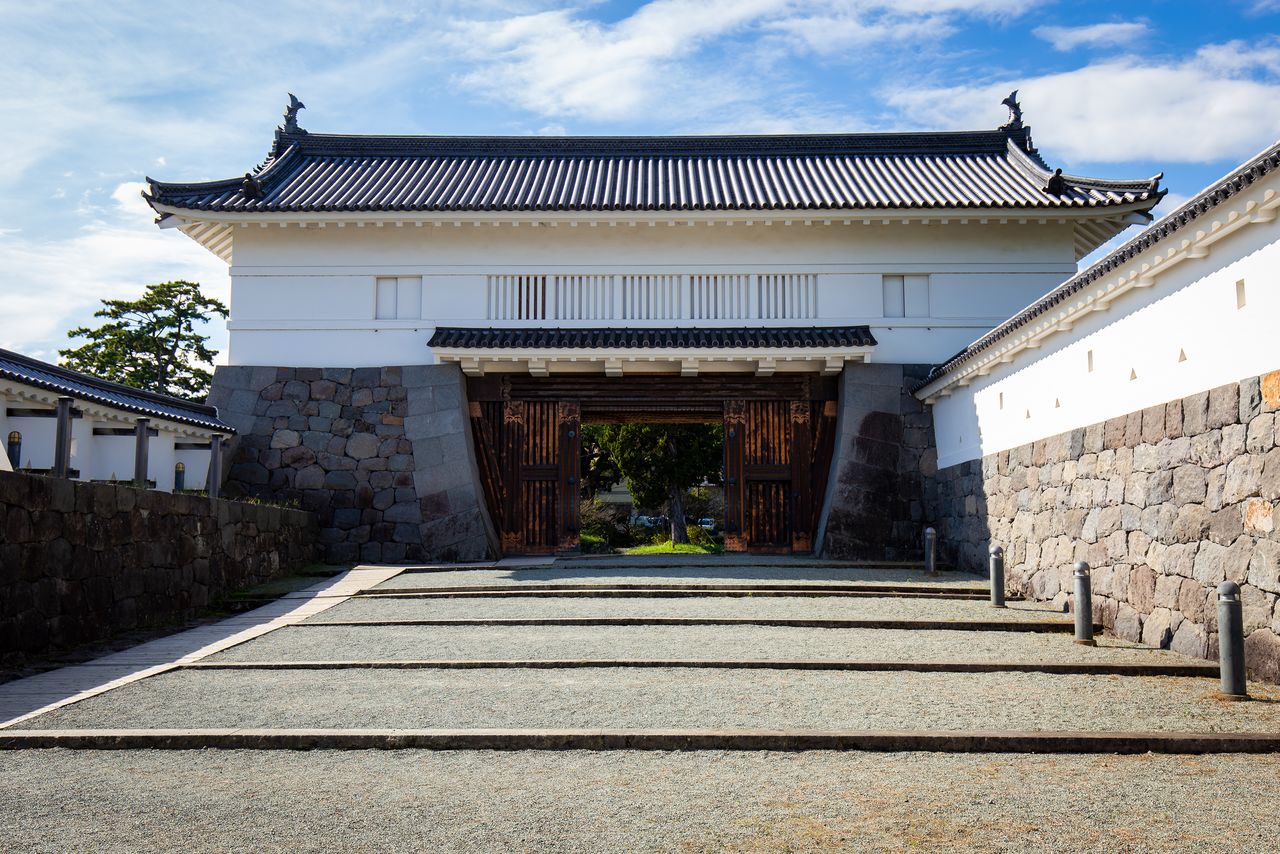 The copper fittings on its massive wood portal give the Akagane Gate its name. 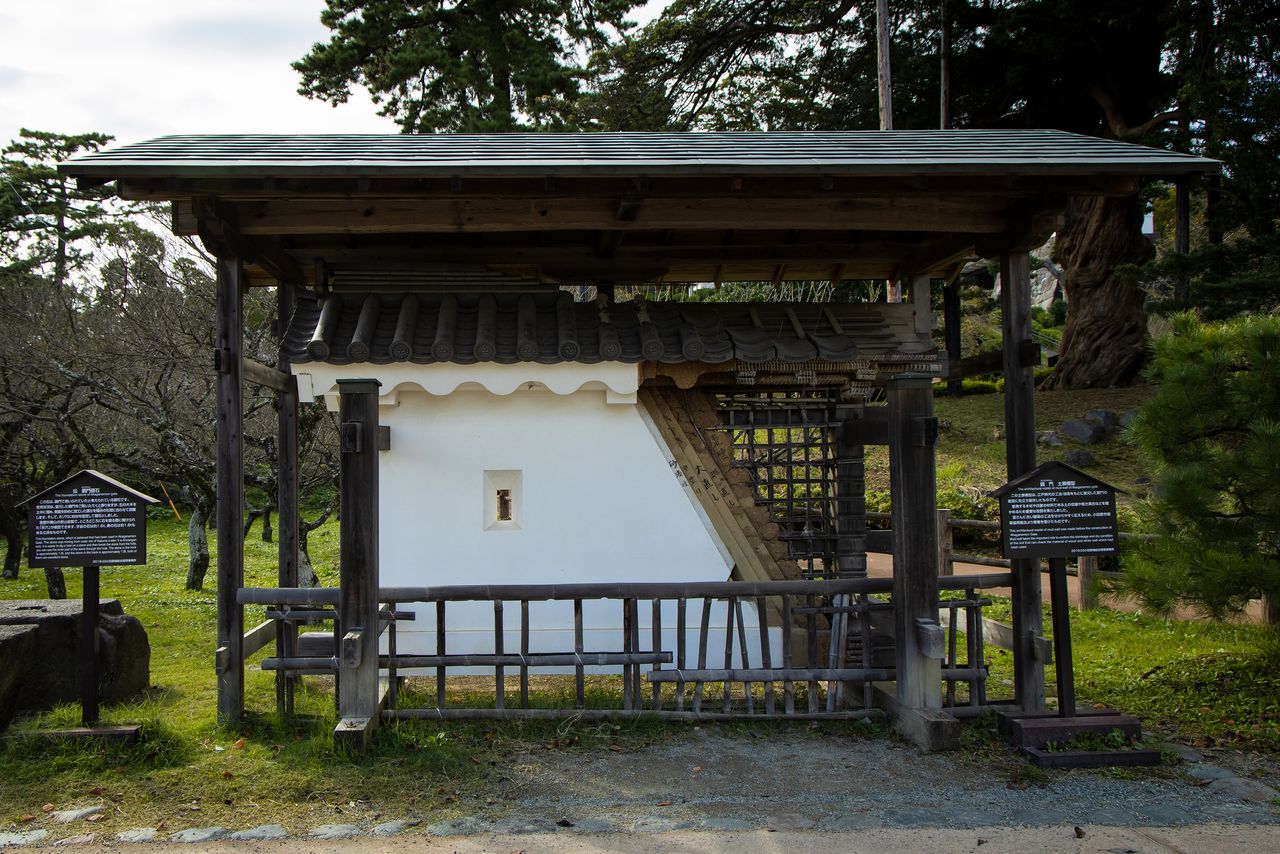 A model of the mud wall in the second compound shows the Edo period building technique employed for the Akagane Gate.

The central keep comes into view when visitors pass through the Tokiwagi Gate. A palace built in the seventeenth century to provide accommodation for Tokugawa Iemitsu, the third shogun, once stood in the main compound, but was destroyed. Today, the vast open space gives a splendid view of the three-tiered roof of the four-story tall central keep. 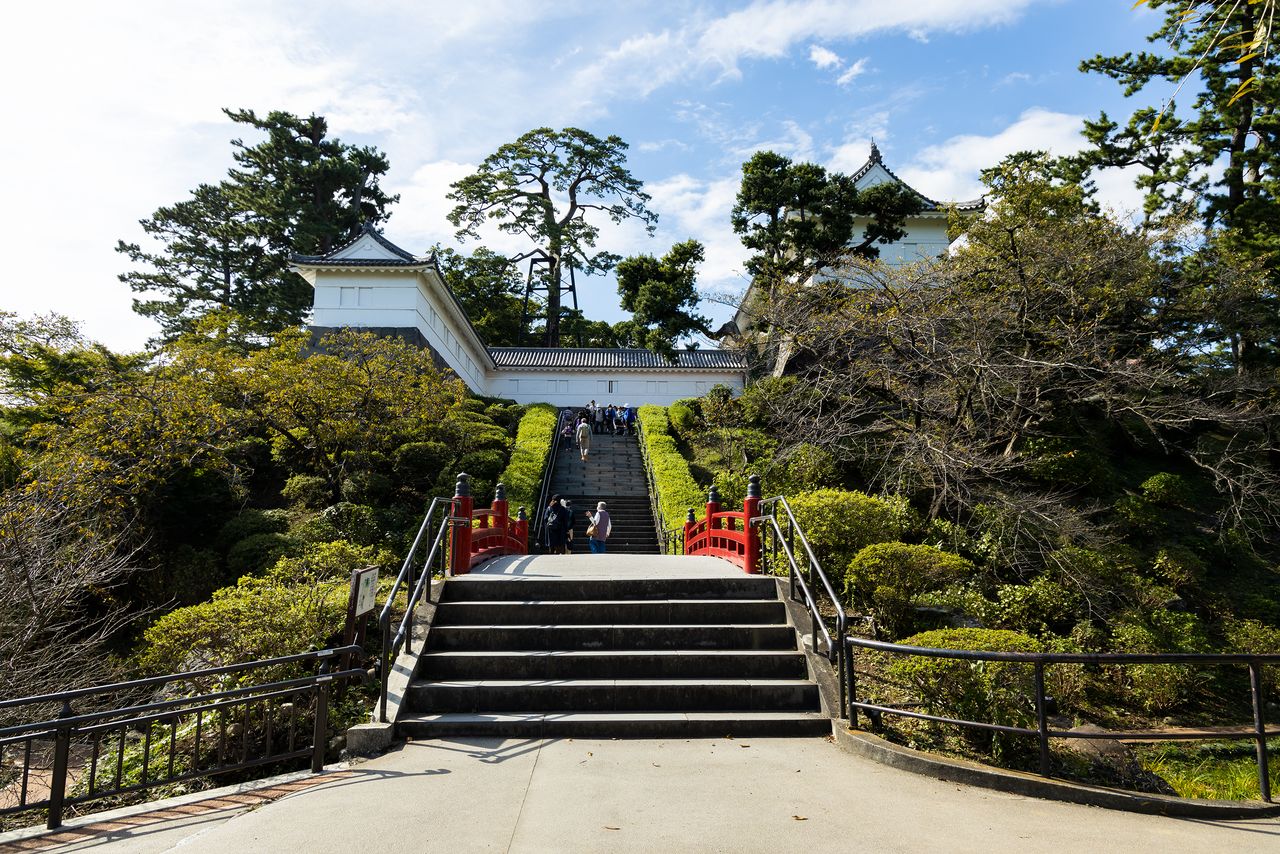 The Tokiwagi Gate is at the top of the stone steps. Hanashōbu (German iris) bloom under the vermillion bridge. 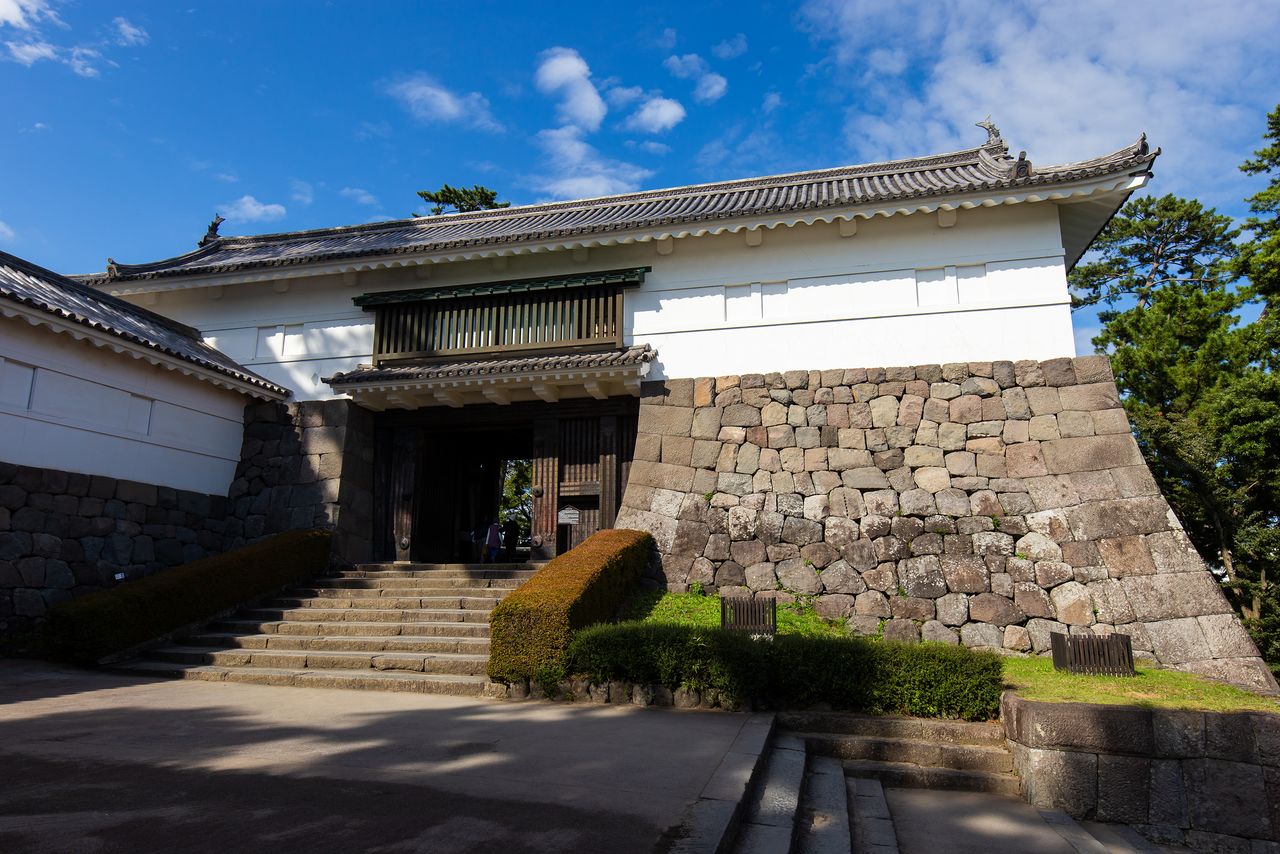 The imposing Tokiwagi Gate, entrance to the castle’s central keep. 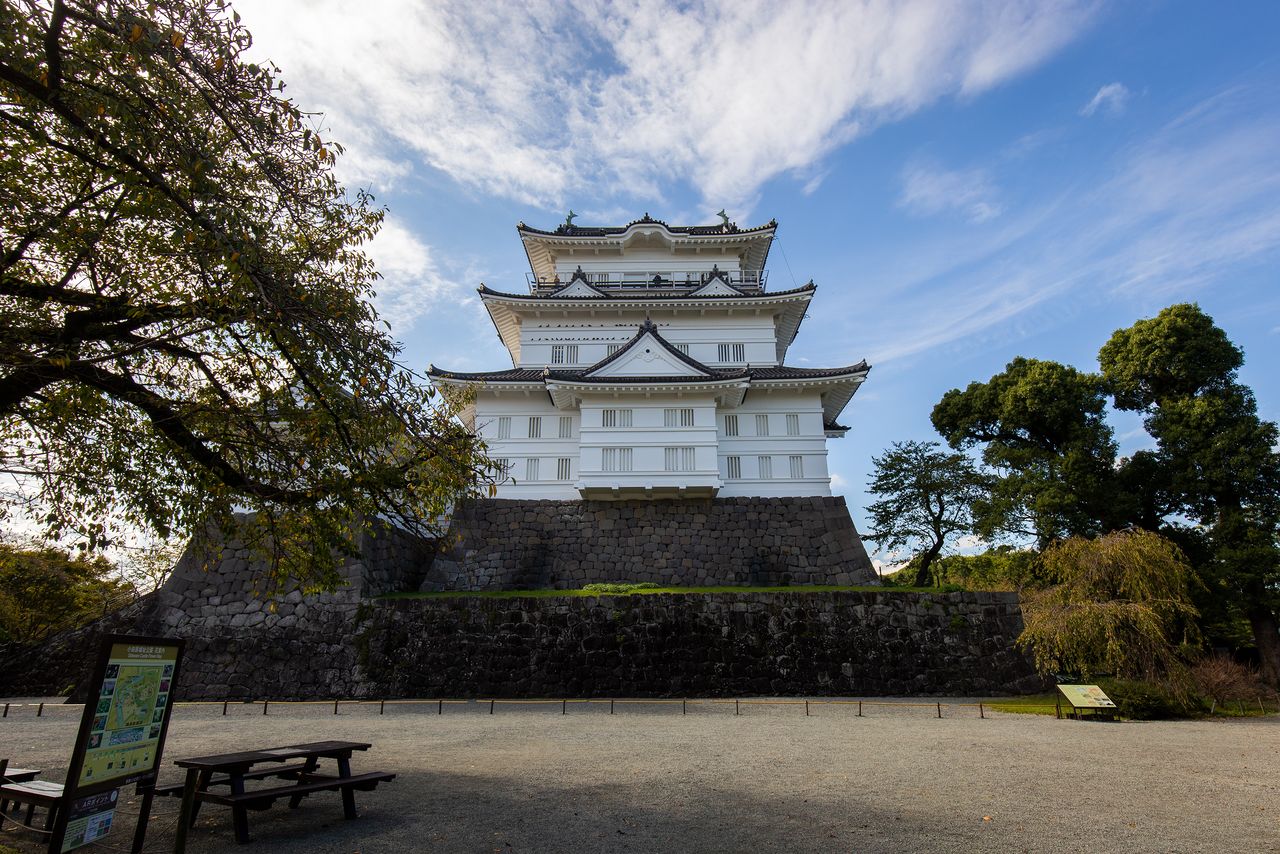 The central keep, viewed from the east. Shachihoko, mythical creatures said to protect against fire, are poised at the ends of the roof ridge.

Including the stone ramparts, the central keep stands 38.7 meters tall. The building houses panels describing the castle’s history and important historical artifacts, including suits of armor, swords, documents, and pictures. The top floor, 60 meters above sea level, offers panoramic views of the city and of Sagami Bay. 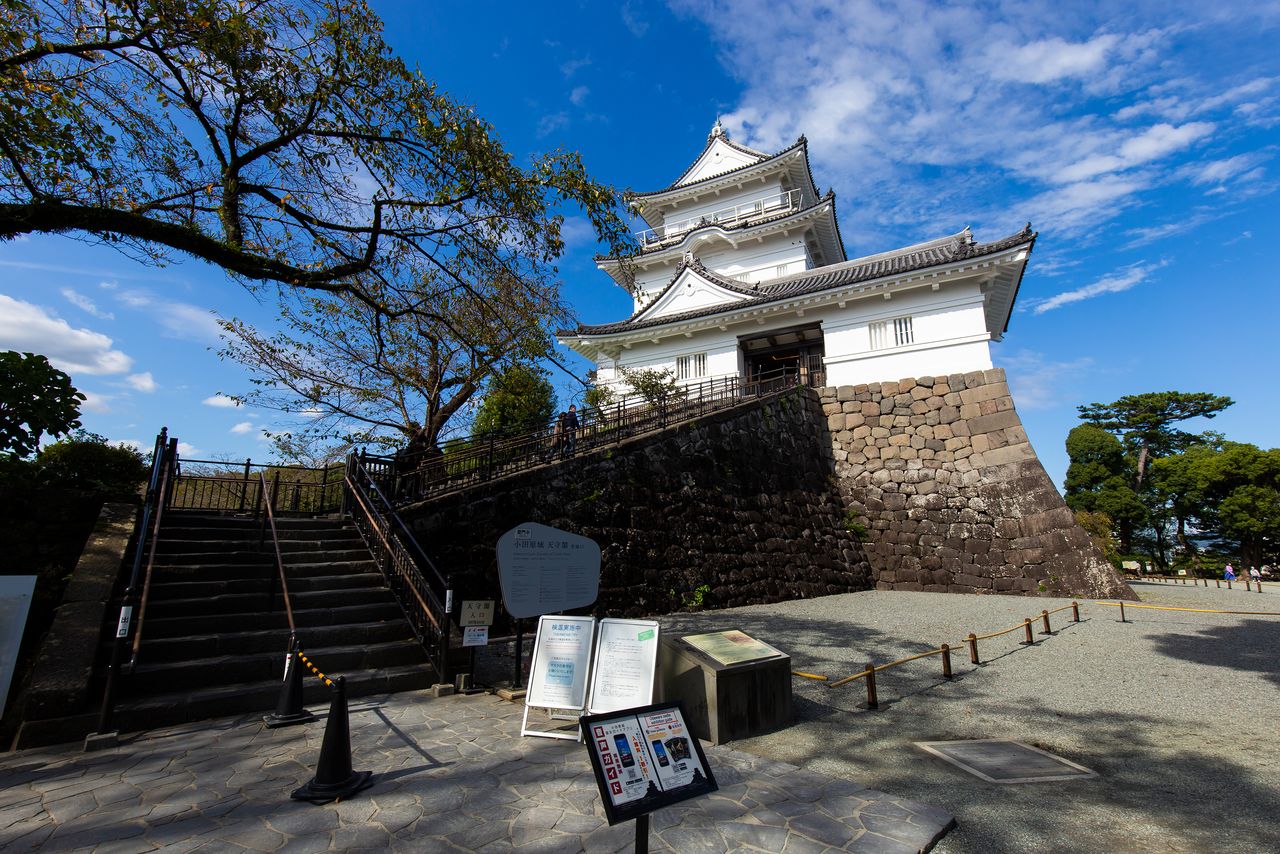 The entrance to the central keep. Admission tickets are sold from a booth at the top of the stairs. 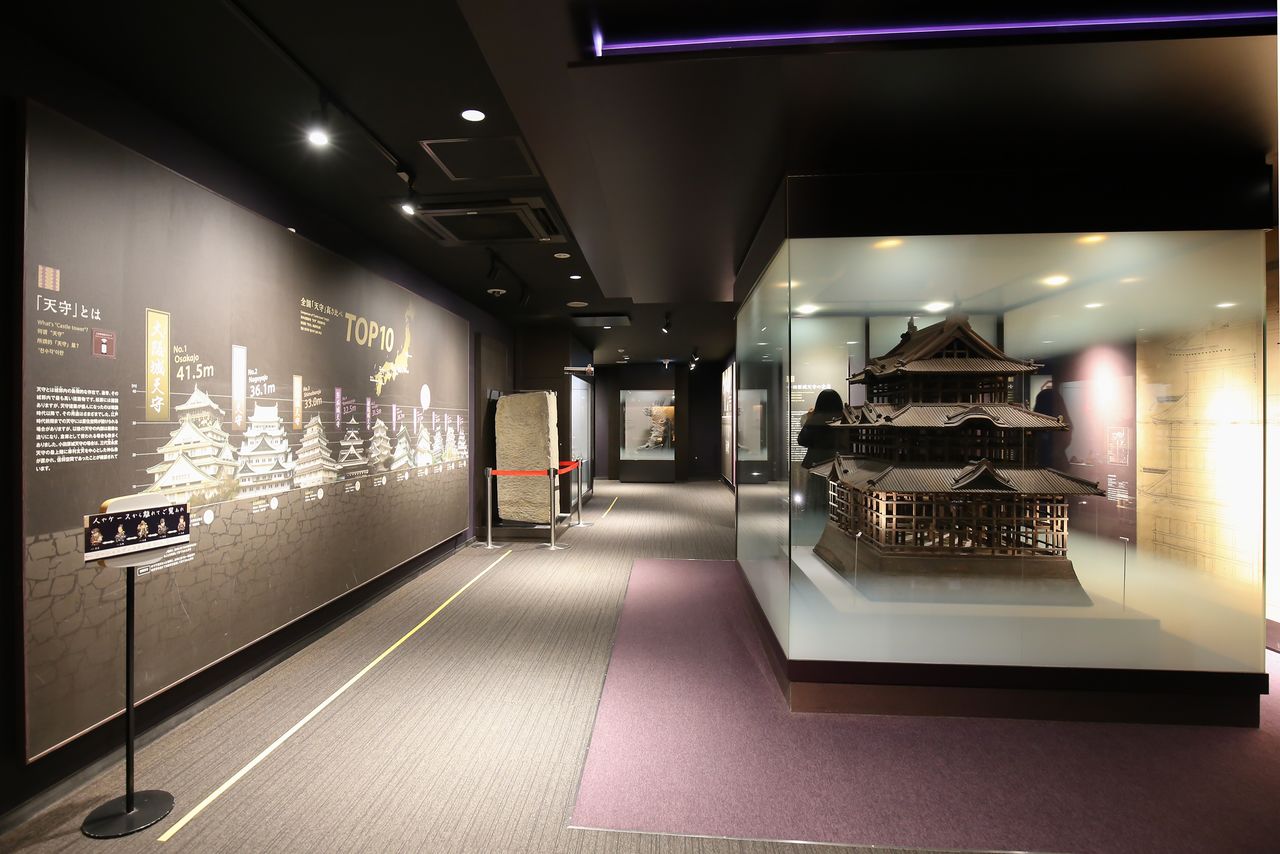 Panels, models, and historical documents recounting the castle’s history are displayed inside the central keep. 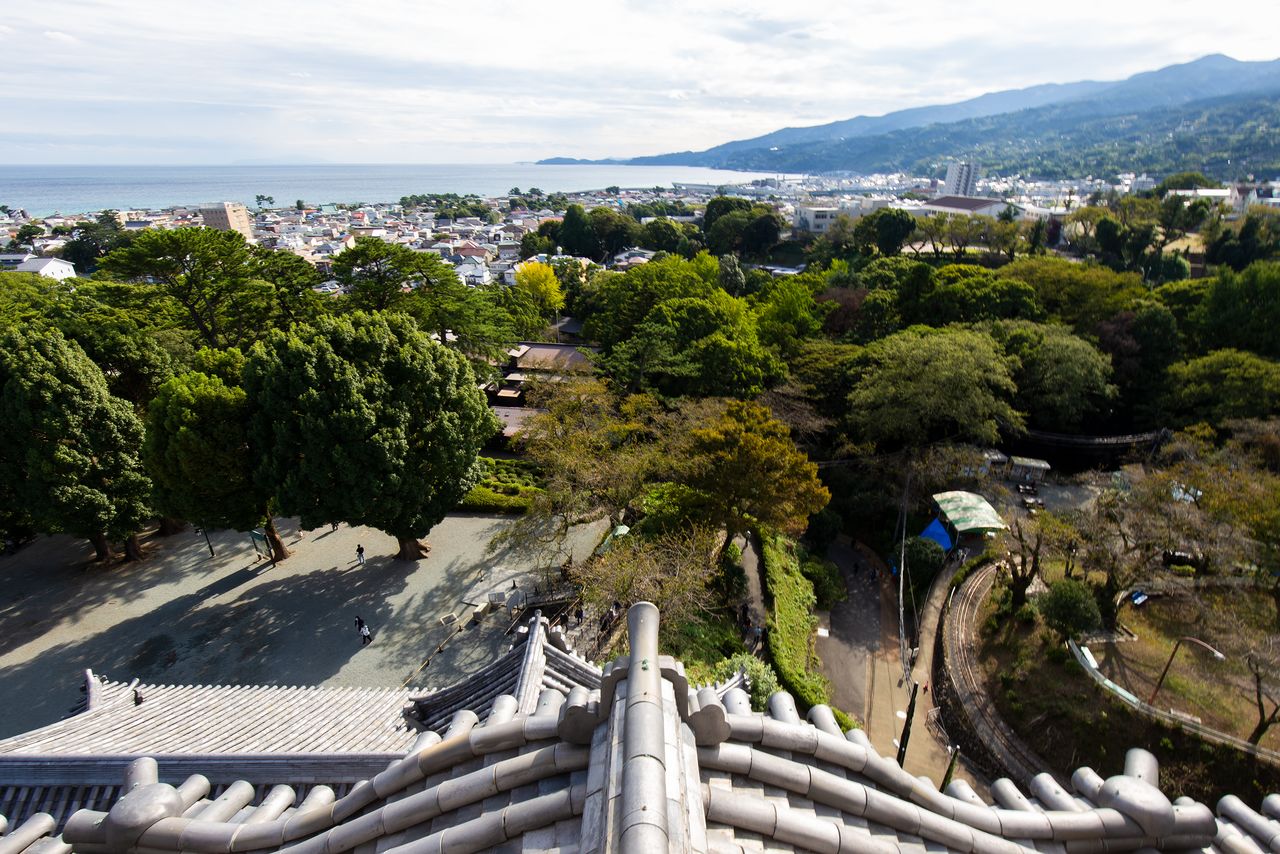 The view from the central keep observation deck, with the city below and the Izu Peninsula in the distance to the right. 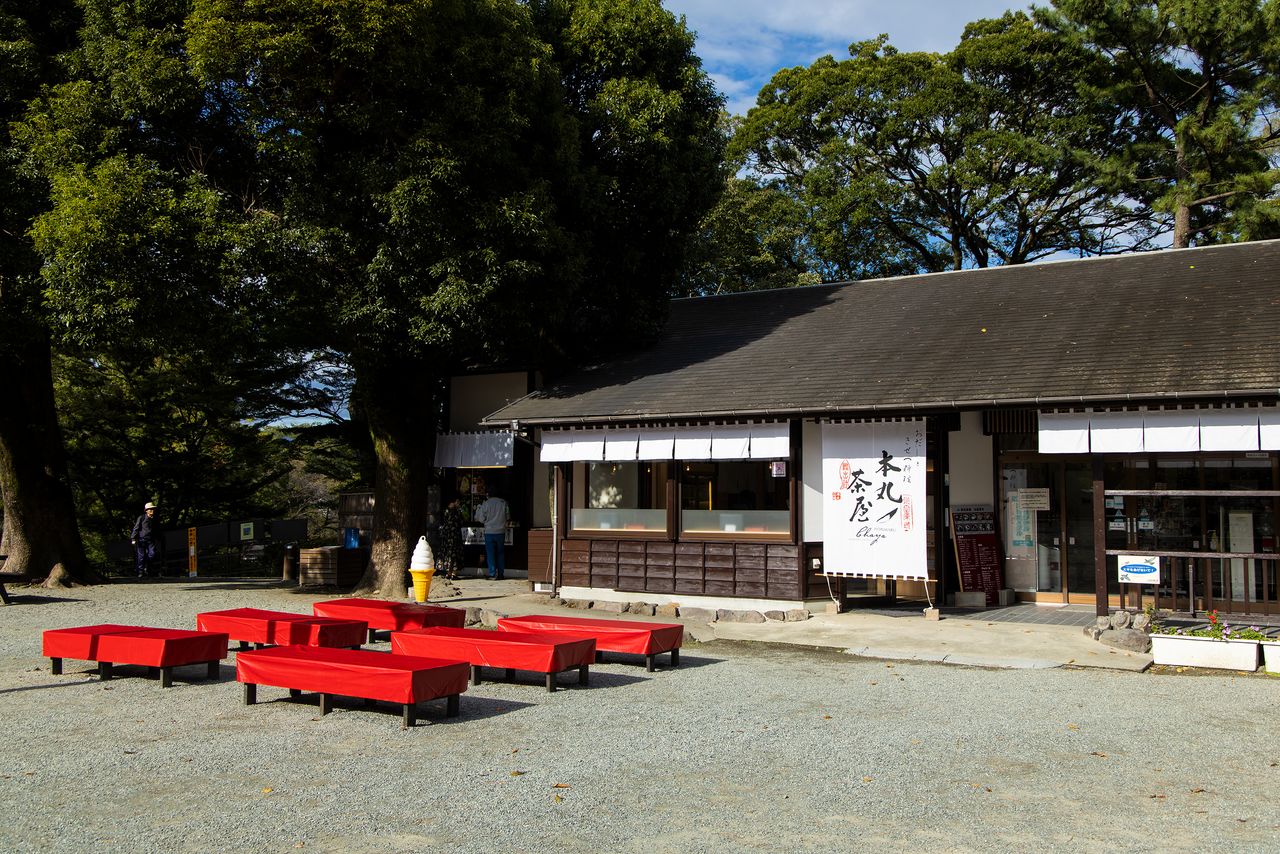 Refreshments are available at the shop Honmaru-chaya.

Inside the main compound, the Tokiwagi Samurai Museum displays armor and swords. For families with children, there is a small amusement park behind the central keep, and Ninja Museum, in the second compound, offers fascinating information about the stealthy warriors.

Odawara Castle Park is also popular for viewing seasonal flowers, such as cherry and plum blossoms in spring, and wisteria and irises in early summer. 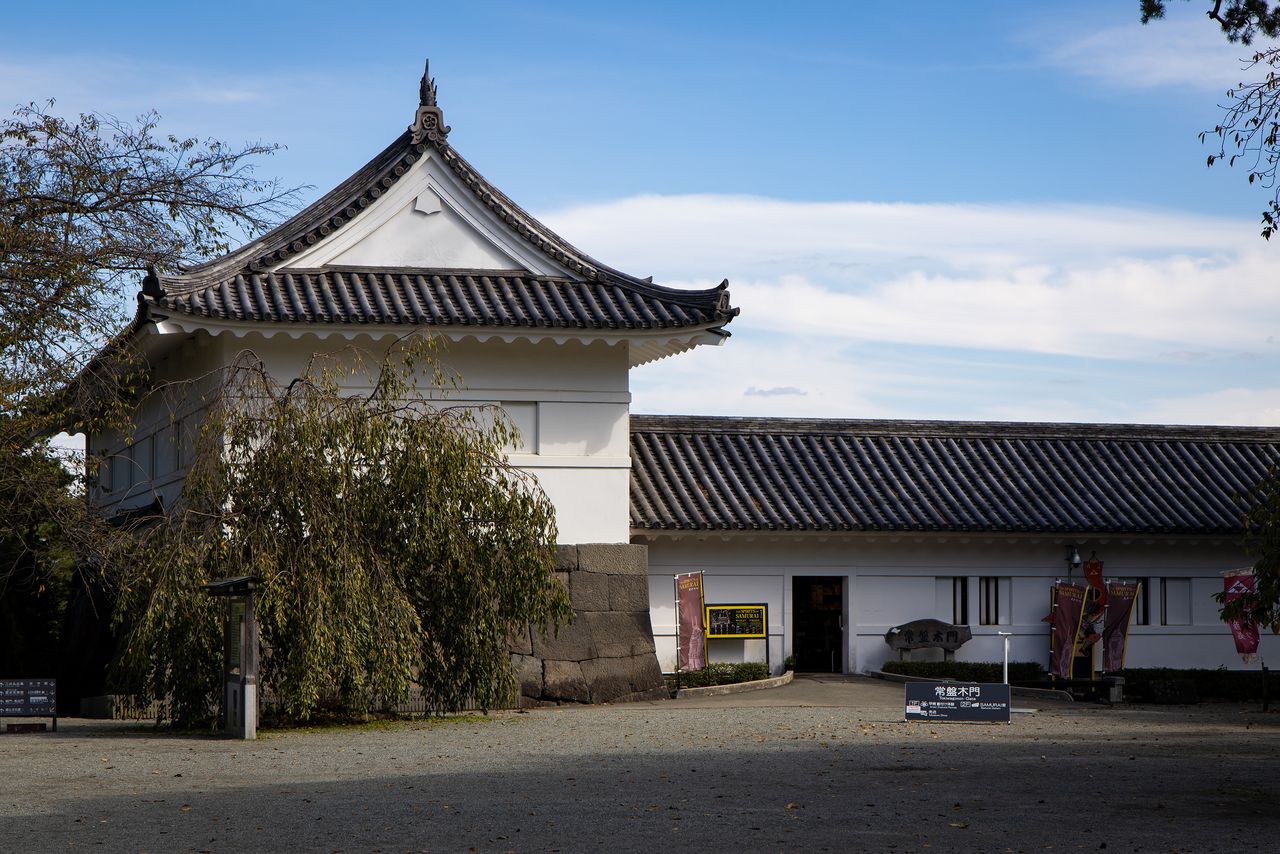 The spot in front of the Tokiwagi Samurai Museum is perfect for photographing the central keep. 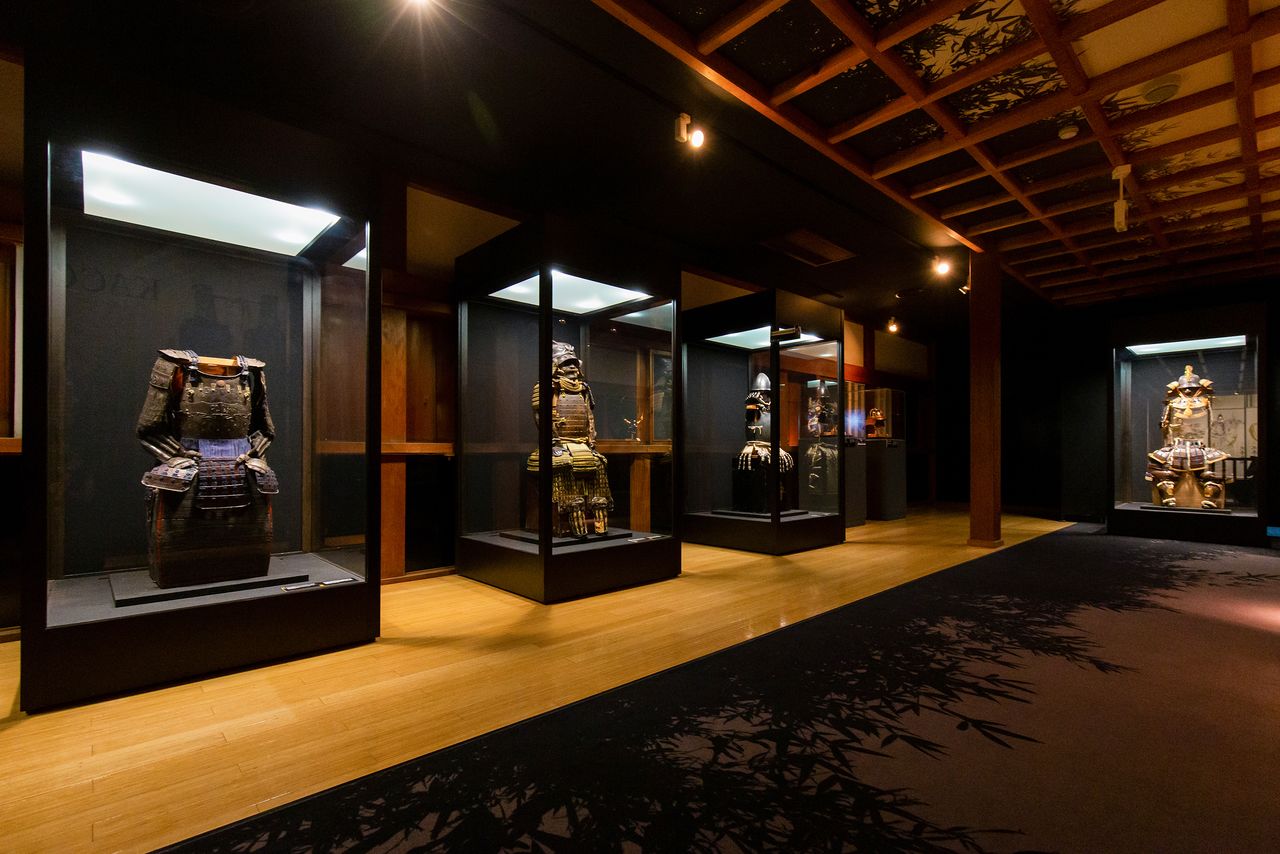 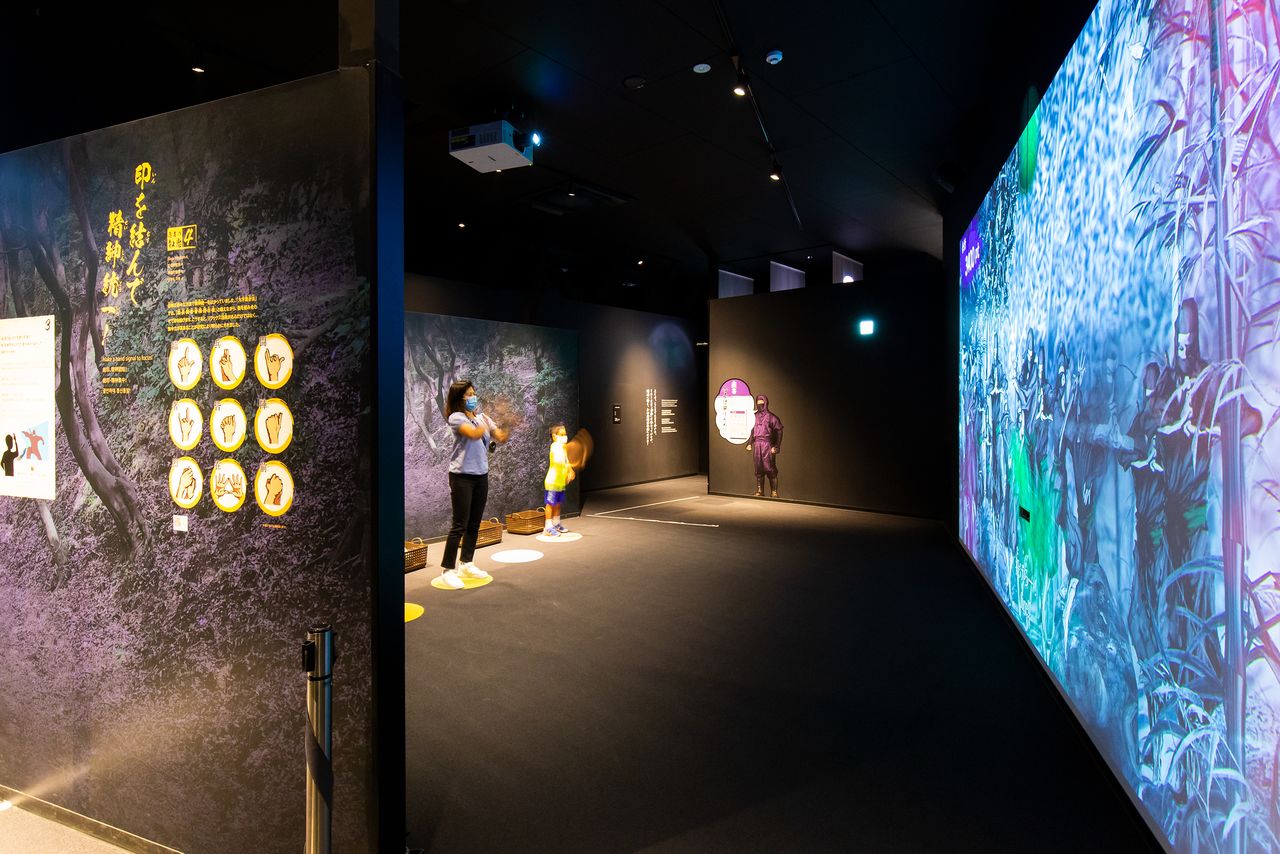 Visitors can learn about the Fūma ninja who served the Hōjō clan at Ninja House, where displays are arranged like a video game. 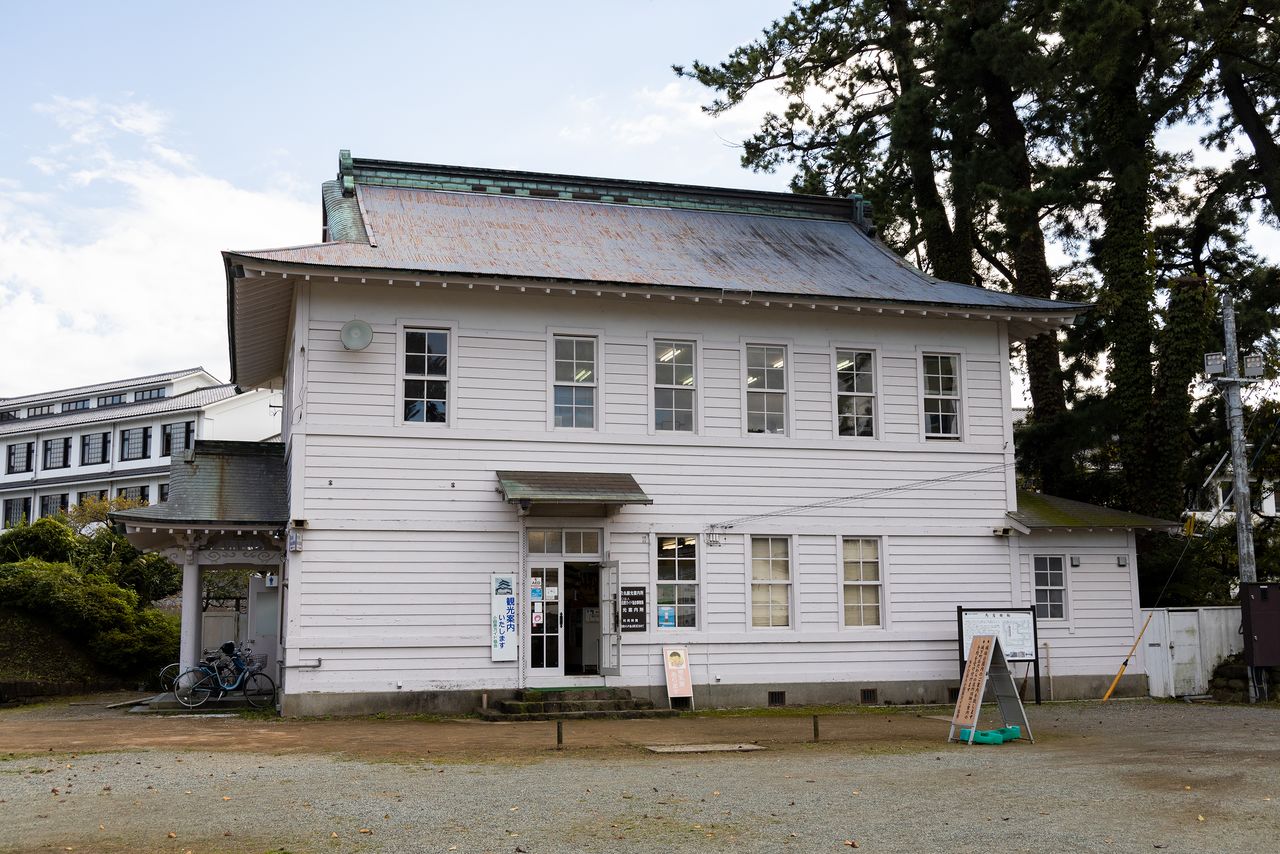 The Ninomaru Tourist Information Office. Visitors can arrange for free guided tours of the castle.