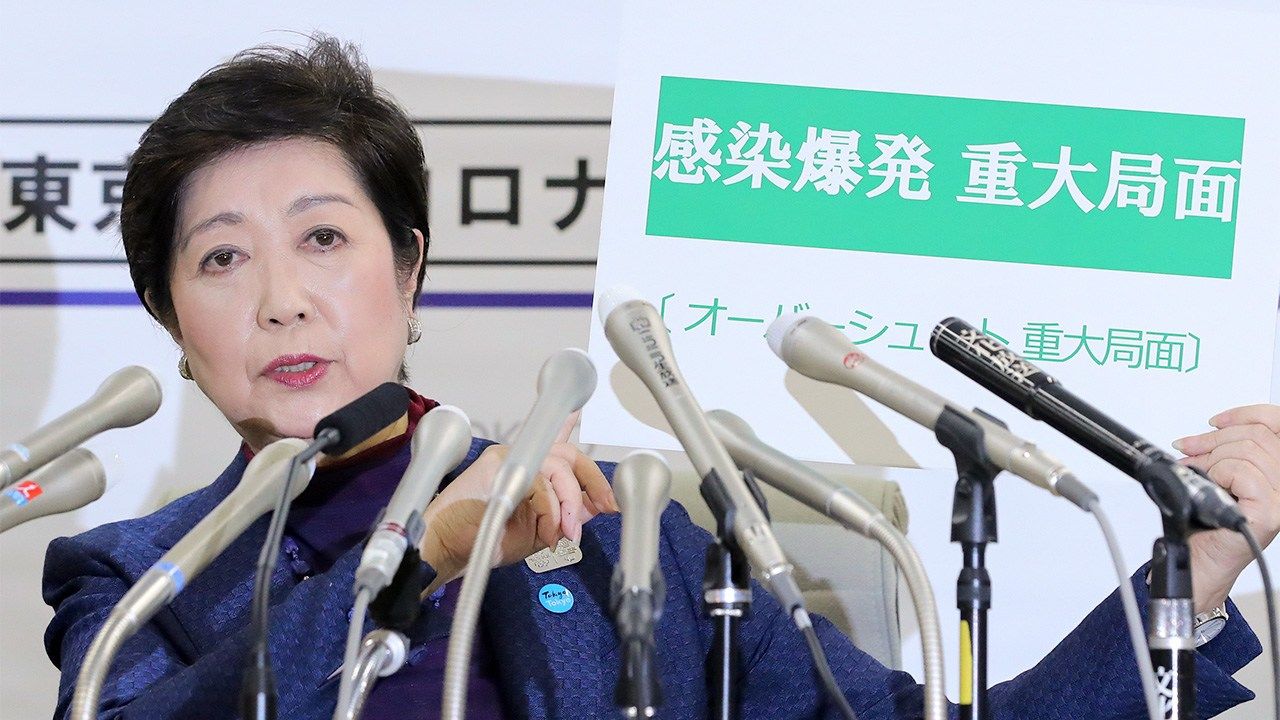 Society Health Culture Lifestyle Nov 27, 2020
The COVID-19 pandemic has brought to the forefront new words and phrases related to efforts to contain it and deal with its effects.

In spring 2020, when Japan was experiencing its first wave of COVID-19 infections, Tokyo Governor Koike Yuriko employed a barrage of katakana loanwords in her daily press conferences. Words like rokkudaun (lockdown), kurastā (cluster), and ōbāshūto (overshoot; a term adopted in Japan to mean an explosive rise in cases) attracted some criticism, but their freshness also highlighted the unusual situation and emphasized the new threat. Overfamiliar, established Japanese terms would not have had anything like the same effect.

The English-influenced phrase “Tokyo Alert” to warn against the crisis seemed a typical nod to the international from the capital, by comparison with the lighting up of Osaka’s longstanding Tsūtenkaku tower landmark. The use of yoru no machi (night city) to refer to adult nightlife establishments eliminated any faint nuances of prejudice against that milieu, while uizu korona (“with corona”), describing the state where people continue to lead their lives although the disease has not been eradicated, carries the moral instruction that residents must each get by despite daily inconveniences. All these were popularized by Koike, conveying a sharp sense of crisis and rousing the central government to action.

As a skilled linguist, Koike is attuned to the power of words. With the momentum from her successful gubernatorial campaign in 2016, she established Tomin First as a local political party, combining tomin (“metropolitan citizens”) with a flashy loanword. By branding the ruling Liberal Democratic Party chapter as conservatives pandering to vested interests, she flipped the Tokyo assembly, like in a game of Othello, and won a majority.

The beauty of the party name is that it suggests that others are not putting residents first. Similarly, the waizu supendingu (wise spending) Koike has advocated implies that her opponents lack wisdom. John Maynard Keynes, who invented the phrase, might give a wry smile at Koike’s usage.

If new words catch on, they carry a sense of shock and appeal. Whether they catch on or not depends on the credibility of the people who use them, and in Tokyo, at the center of Japan’s COVID-19 crisis, they were clearly very successful. The special legislation for containing the pandemic did not allow for penalties to enforce bans on going outside or temporary closure of businesses, but the orders from the authorities were highly effective.

Inciting a sense of urgency through the state of emergency activated a switch that brought pressure to conform and mutual monitoring, which derive from the “village society” way of thinking that remains strong in Japan. At the same time, it is true that resistance to the stimulus of katakana words is easily acquired. The right timing and appropriateness to the situation were essential.

The Communicative Power of the Three Cs

Here, I find myself coming to compare Koike with former Prime Minister Abe Shinzō. At press conferences, he tended to speak sonorously from a script, accompanying his presentation with gestures and other movements. Yet his words did not resonate. They did not sound like his own. He just gave the same kind of address he had given so many times in nine years, including both stints as prime minister.

Each August, when marking the anniversaries of the bombings of Hiroshima and Nagasaki, he read half-hearted bureaucratic speeches on the abolition of nuclear weapons. In speeches on the anniversary of the end of World War II, he interwove stale historical expressions typical of right-wing politicians. These left his remarks feeling as though they were crafted solely to touch on the expected points, and vaguely out of touch with reality. Compared with the meticulous depth of peace declarations by the two cities’ mayors, and the words of the emperor recalling World War II, they were always painful to hear.

When it comes to the pandemic, national leaders have all been stumbling in the dark, learning as they go, but outcomes have been very different. At this stage, Japan seems to have been affected relatively lightly in terms of cases and fatalities compared with other countries, but we still do not know the reason for this. While he did not coin them himself, Abe is associated with such phrases as Abenomasuku (referring to the masks distributed to all households), ichiritsu kyūfu (the “uniform payments” of ¥100,000 to all residents), and the san mitsu, or three Cs, as they became known in English.

The Ministry of Health, Labor, and Welfare apparently came up with the phrase san mitsu, based on opinions from experts, when the pandemic response was taking shape at the start of March. This warns against closed spaces, crowded places, and close-contact settings, which in Japanese share the kanji 密 (mitsu), meaning “close” or “crowded”—and begin with C in English. It displays remarkable talent from a bureaucratic copywriter. The simple rules for daily life during a pandemic are a powerful method, requiring zero outlay.

In July, the World Health Organization in turn recommended avoiding the three Cs to people around the globe. A shortened form in Japanese using just the three kanji 集・近・閉, signifying gatherings, close contact, and enclosed spaces, to represent the phrase circulated on social media. Carrying the same pronunciation in Japanese of shūkinpei as that for President Xi Jinping, it included a pointed reference to the Chinese origin of the COVID-19 outbreak.

Incidentally, I felt some Buddhist overtones in the san mitsu phrase, and on looking it up in the Kōjien dictionary found it defined in the esoteric Buddhist tradition as the Buddha’s body, mouth, and will. What humans are unable to conjecture is described as mitsu. It makes me wonder if COVID-19, which we cannot grasp, is similar to this unknowable Buddha nature. The phrase is considered a strong candidate for the 2020 Words of the Year grand prize. Perhaps the Kōjien editors will need to update the entry in the next edition of the dictionary.

Looking for an End to the Situation

One word related to the pandemic that has had reporters and editors tearing their hair out is shūsoku. In Japanese, this can be written as 収束 or 終息, which have similar meanings of a situation “returning to stability” or “ending,” respectively.

If someone is speaking, it is unclear which of the words is being used, and it has to be decided from the context or nuance. When Prime Minister Abe announced the lifting of the state of emergency on May 25, talking about the almost complete shūsoku of infections, the next day’s newspapers all used the former 収束, hinting at a temporary return to calm, as it was clearly only one stage of the pandemic that had come to a close.

However, if we have a text talking about shūsoku of COVID-19 making it possible for Tokyo to host the Olympics after all, we could be looking at either of these words. It depends on both one’s assessment of the situation and the words themselves. The 収束 version clearly refers to a single point midway along the lengthy pandemic process, while 終息 sounds like a more definitive conclusion. Some linguists position the “temporary return to stability” 収束 as a transitive verb—requiring an object, as in “we will return the pandemic situation to some semblance of normality”—while 終息 is intransitive, used to state that the pandemic itself has ended. But there are no clear definitions here, and several media organs in Japan have dedicated articles to exploring the various possibilities that shūsoku has to offer.

The Significance of the “Social”

One incongruity I find in Japanese language to do with the pandemic is the translation of “social distance” as shakaiteki kyori. The English word “social” derives from the Latin “socius,” meaning “friend.” In Japanese, “social” can become shakai (社会) in contexts related to society, but shakō (社交) in more friendly or interpersonal contexts. For instance, a social dance becomes shakō dansu, rather than something to do with shakai; social networks online, which connect individuals, would also fall under the shakō category here.

One might expect shakō to also appear in translations of the “social distance” we are expected to maintain in these pandemic days. Complicating the matter, though, is the usage of shakaiteki kyori, using the shakai meaning society as a whole, in established literature in the social sciences, where it means the degree of understanding and familiarity found between individuals or groups of people. Indeed, even the World Health Organization has moved away from the word social in English, opting instead to talk about maintaining “physical distance” to protect oneself from infection.

In Japan, the COVID-19 pandemic has been joined by a parallel problem of discrimination against people who have contracted the virus, their family members, the places of business where they caught it, and even the people staffing the medical institutions caring for them. In this light, the need to recognize infection as a danger to one’s social standing, not just one’s personal health, might make the sociological term shakaiteki kyori an apt one to use in this case. I do not think the term was chosen with this background in mind, but it is a frightening background to consider all the same.