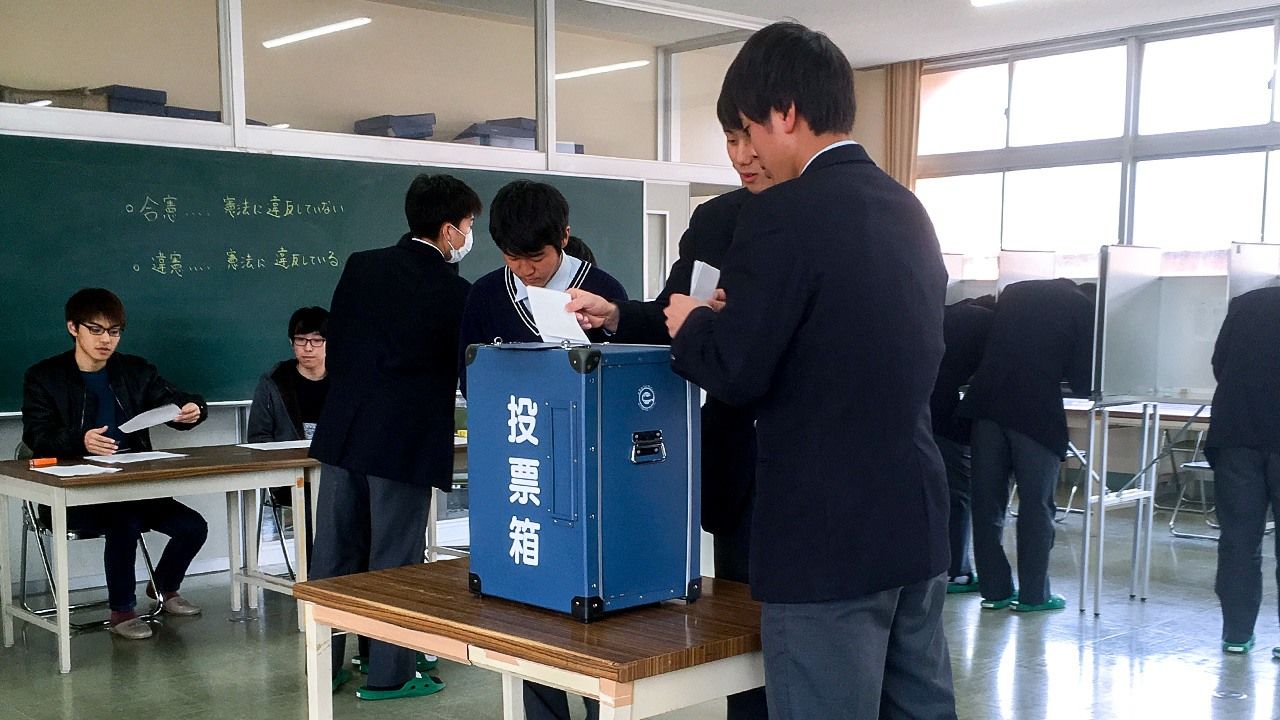 Why Blame the Young for Low Voter Turnout?

Politics Society May 11, 2022
Voting turnout among young people in Japan is relatively low, at around 40%. However, educator Maiguma Kōichi argues that there is too much focus on insufficient political participation by the young, while older citizens’ participation goes unquestioned.

Although I am neither a specialist in voting activity nor particularly versed in discourse concerning young people, whenever an election approaches, the local media regularly comes to interview me about young voters. I imagine this is due to my having become somewhat involved in contemporary politics, together with students.

For example, at Shimane University, where I teach, there is a club called Poli Rangers, which aims to support positive participation in politics for young people. I have been an advisor to the group since its foundation in 2009. We held an online mock vote for the university’s students to coincide with the 2021 House of Representatives election, and an “entrance poll.” The former was an experiment in voting via the internet that also aimed to stir up the debate about raising local turnout by providing an alternative form of voting. The latter was essentially an exit poll, although not a typical one. It was focused on the experience itself for students of speaking directly with voters. The idea was that this provided them with an “entrance” into political participation. 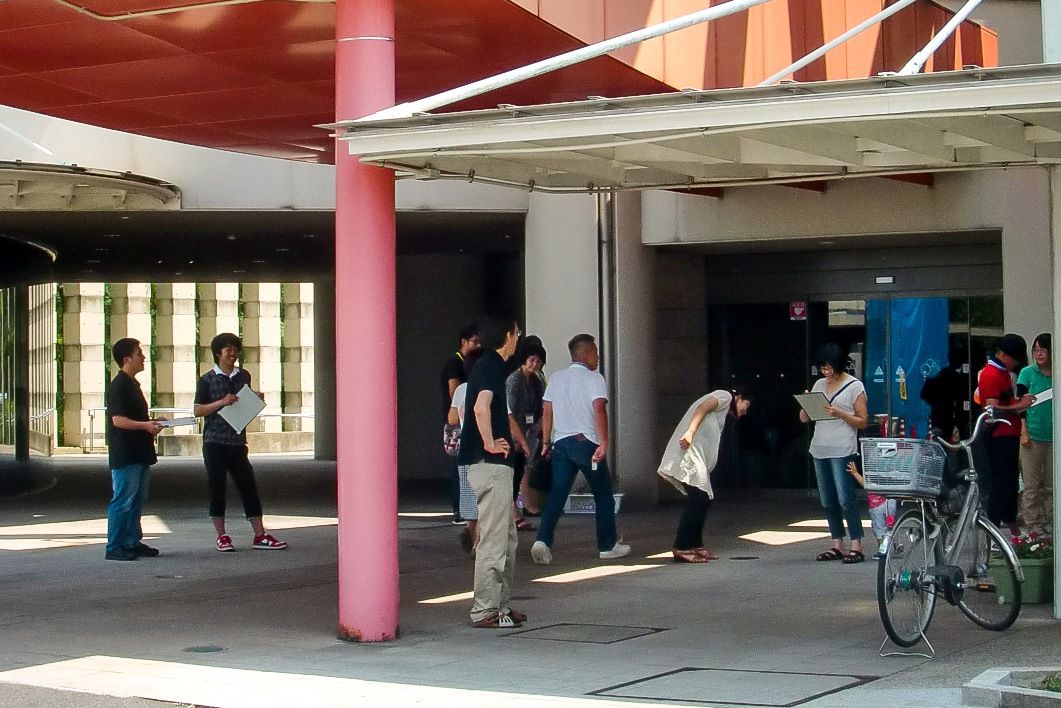 An exit poll conducted by students in Matsue at the time of the 2013 House of Councillors election. (Courtesy Maiguma Kōichi)

I also supervise seminars on public administration with the goal of implementing solutions to social issues. These received a Manifesto Award, with notice taken of the Poli Rangers’ activities and practical citizenship education in collaboration with the Matsue City Assembly.

I am writing here from such a perspective, rather than based on precise academic expertise. I hope that the miscellaneous impressions that I have gleaned through activities with students can help to foster change.

“What can we do about low voter turnout among young people?” This is a standard question when I am interviewed. But I have come to think of it as incongruous. There is something fundamentally odd about the way it is formed.

“People who do not vote are bad.” This is the premise behind the question, which veers toward actually asking, “How can we make young people, who have various problems, cast their votes?” But nobody interrogates the audience at a tedious manzai comedy show as to why they do not laugh. There is also a tendency to shelve discussion of older citizens when talking about low turnout. Maybe the problem lies in our attitudes, rather than those of young people. It’s worth noting, too, that it seems to be only at election times that the varied members of the young cohort are lumped together. 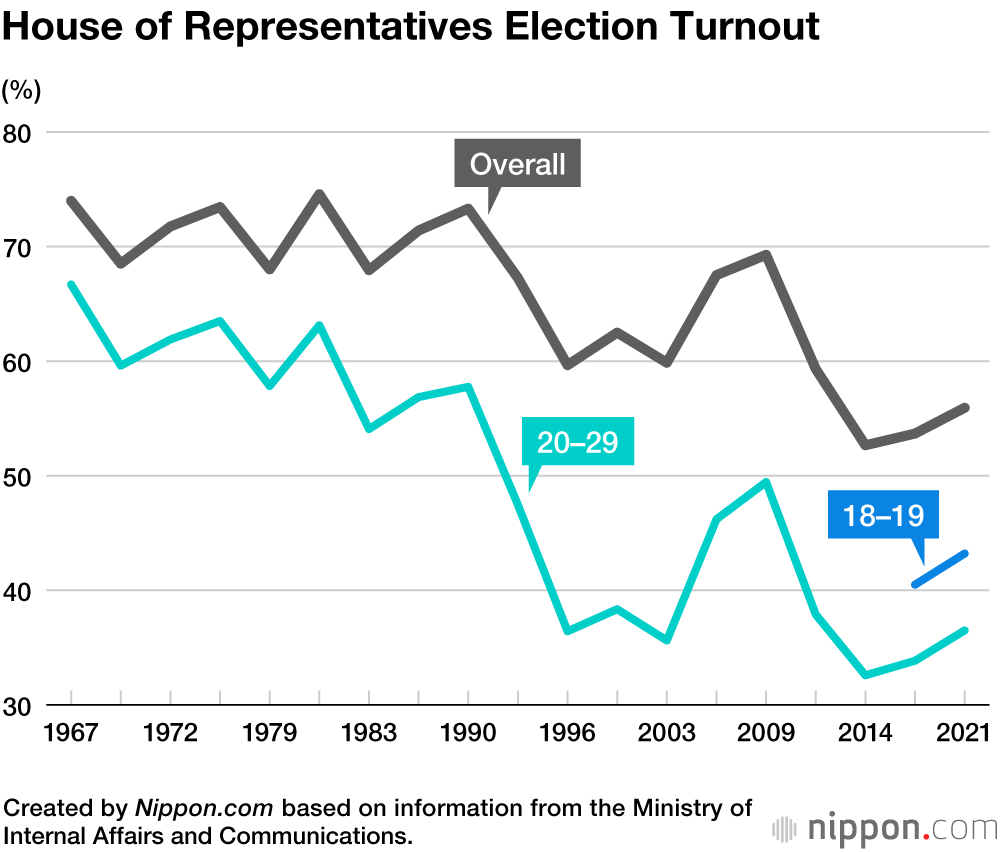 This a sudden switch, but I would like to talk now about the song Ussee wa (Shut Up!) by Ado. It was posted on YouTube in October 2020, rapidly found an audience, and now has more than 200 million plays. The singer was still in high school when she recorded the hit song. With a powerful voice and overwhelming singing ability, she belted out the words “Shut up! Shut up! Shut up!” expressing the dissatisfaction and rage of youth at all that she finds irritating (another meaning for ussee), and drawing attention across the generations.

However, we should not get the wrong impression. The music critic Ayukawa Pate says that the main melody is not one of “protest.” It is one of despair toward and rejection of adults. Protest is a form of communication, but rejection offers no way to connect. This is really serious.

We must not ignore such insights in the context of political participation. If adults who are not even on their radar try to lecture from above or sidle over with a know-it-all look, they will simply be disregarded. Then, what is the best approach?

I do not have any particularly ingenious plan. But first, older people could perhaps begin by addressing their own turnout problems. Have we really considered these sincerely, or just paid them lip service? As evidence. . . Well, I would like to provide evidence a little later. For the moment, I would like to call these issues, in summary, “deception.” Young people have seen through to their seniors’ various forms of deceit. Low turnout is one manifestation of this insight.

This article is a letter of apology, incorporating self-reflection. But like the young, there are many kinds of older people. Some are honest, while others are not in a position where they should be blamed. I would like my words to be read and understood in this context.

First, we should recognize the perfunctory nature of citizenship education. It is true that educators put some effort into the topic when the voting age was lowered to 18 some years ago. However, this ended up as a passing fad. Even after the Ministry of Education, Culture, Sports, Science, and Technology lifted the effective ban on students’ political activities that was imposed in 1969, schools still maintain a distance from contemporary politics in the name of “neutrality.”

Mock elections are a good example. These are timed to the convenience of the class, and there is no sense of reality in placing one’s vote for “Sakamoto Ryōma of the Apple Party.” Even if it is “mock,” it would be better to have an election with actual parties and candidates that takes place at the same time as a real one.

Teachers should also reflect on how they have not treated students as citizens to date. In typical school life, students’ position as individuals being educated to take on the mantle of “people who make up a peaceful and democratic nation and society,” as described in Article 1 of the Basic Act on Education, is not recognized. For instance, during the pandemic, at many schools teachers alone decided what to do about school trips. The many unreasonable school rules, out of line with student sensibilities and maintaining a way of thinking decades out of date, also attest to this attitude.

A Ministry of Internal Affairs and Communications research group stated that “Students should participate in society, think for themselves, and make their own decisions as citizens.” This is probably why schools encourage students to take part in community and volunteer activities. But society is not a separate space outside of school. School itself is society. What does it mean to foster people capable of “sensible citizenship” (from of the same act) if they are excluded from decisions on important social issues close to them, such as school rules? Citizenship education should not be confined to the classroom.

As a side note, I live in Matsue, in Shimane, which is Japan’s only prefectural capital with a nuclear power plant. From January to March 2022, requests were submitted in Matsue and three nearby cities—Izumo, also in Shimane, and Yonago and Sakaiminato in neighboring Tottori—to hold citizen referendums over the restart of a reactor at Shimane Nuclear Power Station. In all cases, the number of signatures far exceeded the legal requirement. However, opposition from the four mayors led to the assemblies denying the requests. Politicians are always talking about how “citizens play the leading role” and that they “welcome participation,” but this was the outcome. Citizens’ views are blithely disregarded. One might see schools as a microcosm of this society.

No Escape from Politics

In Japan, we have often told the next generation that “Local self-government is a school for democracy,” in a paraphrase of words by British jurist and politician James Bryce. However, there is a regrettable omission of a key word here. Bryce actually said that, “The best school of democracy. . . is the practice of local self-government.” This is not just an oversight, but leads to a loss of reality. At the end of the nineteenth century, Bryce saw the origins of US democracy in “the practice” of citizens debating and splitting tasks such as cleaning, road-building, and ranch management. Meanwhile, in Japan today, some people are said to choose to live in condos because they do not wish to join neighborhood associations. PTA meetings to choose committee roles are mocked as “funerals,” as if those parents selected are being punished. Children are raised watching such parents. It is true that neighborhood associations and PTA groups have some issues. But one could say this makes them better places to learn. It is not only children who need “schools.”

My own youth coincides roughly with the 1990s. At the time, the lower house election turnout for people in their twenties as a percentage was in the high thirties. This is not actually very different from today. And the twenty-something cohort has continued to have the lowest turnout for half a century. We have traveled the same road, so we should humbly ask ourselves if we have the right to criticize the young. Even among those of the age to be raising their own children, only around half make it to the polling station.

Further self-reflection is required. Older people often say that one should vote according to policies rather than personalities, but do they follow this? Instead, they might vote for someone because of a personal connection, because they feel they have to for their job, or simply as a fan of a celebrity candidate. When the Poli Rangers students conducted their “entrance poll,” they sensed directly from voters that not much consideration had gone into their choices. Various factors have made it easy to be reelected multiple times, while politicians’ tendency to focus on the fleetingly popular issues of the day has created political instability. Who must take responsibility for this? Older voters should set an example.

I may have overdone the self-admonishment. I hasten to add that older people have also sought out solutions. These include suggestions for online voting and reducing the minimum age for candidates. Experts have proposed constituencies representing the young and Demeny voting, whereby parents act as proxies for their dependent children. Further still from the mainstream, there have been ideas for systems to split votes among different policies or entrust them to others.

Still, as none of these will be adopted, there is nothing to be smug about. The only option is to apologize. Let me be blunt. It is better not to expect too much from the older generations. Their age does not mean that they are exemplary. I think that it is only right to disregard them too. However, I want to say just this in the end. Do not give up on interest in politics. Even if we claim to be uninterested in these matters, we are certainly not unimpacted by them. And the kind of politics that interferes in everyday life is always irritating (ussee).

(Originally published in Japanese on April 12, 2022. Banner photo: A mock vote in a Matsue high school on amending the constitution. Courtesy Maiguma Kōichi.)