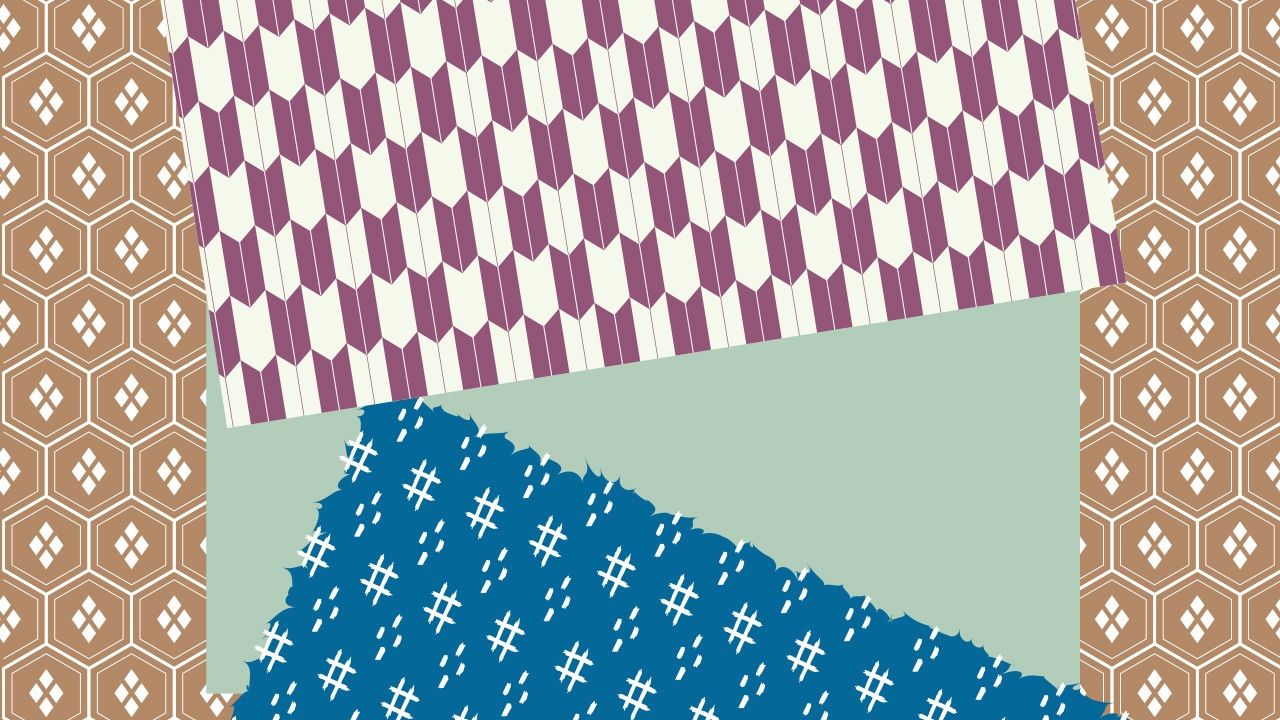 Culture Feb 17, 2020
A rundown of some of the best-known traditional patterns used for kimonos, hand towels, and other Japanese items.

Japanese traditional patterns can be found on kimonos, tenugui hand towels and all manner of other small Japanese items. Learning their names and origins reveals their auspicious meanings and the wishes for happiness that they embody. Here are some of the best-known traditional Japanese patterns.

The combination of triangles resembles the scales of a snake or fish. Samurai would wear clothing with the pattern as a talisman to protect themselves from harm.

This pattern is named for the repeated use of the 工 (kō) character. The way the interlocking characters seem to stretch into infinity is associated with good fortune, and the design is often used in kimono material.

Asanoha is a pattern representing hemp leaves. Hemp has strong vitality and grows vigorously without the need for a lot of care, so this pattern was often used on babies’ and children’s kimonos with the hope that they would grow up big and strong.

This design is based on hawk, eagle, and other bird feathers used in arrows. With their symbolism of aiming for a target, arrows have long been used as an auspicious pattern. And because, once shot, arrows do not return, in the Edo period (1603–1868) brides were given kimonos featuring this yabane pattern for good luck to ensure they would not need to return to their original family home.

In the late 1970s, Benio, the main character of Haikara-San: Here Comes Miss Modern, a manga for teenage girls, wore this type of kimono while at school, and this led to its pairing with maroon hakama, a type of divided skirt, becoming a popular combination at graduation ceremonies.

This pattern is so named because its overlapping arcs of small dots resemble shark skin. It was used by the Kishū Tokugawa family, to which Shōgun Tokugawa Yoshimune (1684–1751) belonged.

This pattern represents fan-shaped waves of the open sea. The name originates from the gagaku ancient court dance called Seigaiha, in which the dancers wear costumes with this pattern. There is a scene in The Tale of Genji where Genji dances the Seigaiha.

Circles overlapping in quarters resemble petals and each center forms a shining star. This pattern is regarded as auspicious for the prosperity of descendants, good relationships, and for bringing harmony.

This is an auspicious pattern derived from the shape of the tortoiseshell (hexagon), which represents longevity. Simple tessellation of hexagons leads to a wide number of variations, including Kikkō hanabishi, where the center of the hexagons form flowers, and Bishamon kikkō, created by joining three hexagons together.

This pattern has different colored squares arranged alternately and is similar to a gingham pattern. While it has been a common woven pattern since ancient times, it became known as Ichimatsu in the eighteenth century as the kabuki actor Sanogawa Ichimatsu liked to use it on his costume hakama. It features in the logos for the 2020 Tokyo Olympic and Paralympic Games.

Two curving lines represent steam gently rising. This was often used as a pattern on kimonos for people of high status in the Heian period (794–1185). Changes to the way the lines curve create variations such as Kumo tatewaku (cloud) and Sasa tatewaku (bamboo).

This pattern was introduced into Japan via the Silk Road; the vines stretching in all directions symbolize longevity and prosperity. For some reason, however, it has become well known as the pattern of the furoshiki cloth that robbers used to carry off stolen goods. It suggests that whichever house they broke into, the pattern was so popular that there was always a furoshiki with the pattern there.

This pattern gets its name because it looks like the spotted back of a fawn. It is created by hand using a tie-dyeing technique and is very labour-intensive, so a kimono with an all-over kanoko pattern is considered a luxury item.

This is a pattern where geometrical shapes are created when two parallel lines intersect and can be found even on pottery from the ancient Jōmon period. Some of the many variations include Waribishi featuring four diamonds combined to form one and Hanabishi where flower petals have been shaped into diamonds.

This was the most popular pattern on hand towels in the Edo period. Mame is a play on words, meaning both peas or beans, as well as sturdy and healthy, so represents the hope of staying in sound health. Most mameshibori patterns these days are created using stencil dyeing or printing techniques, so the dots are regular. However, as the name shibori indicates, this pattern was originally handmade using a tie-dyeing technique, meaning the dots were once a more irregular shape.