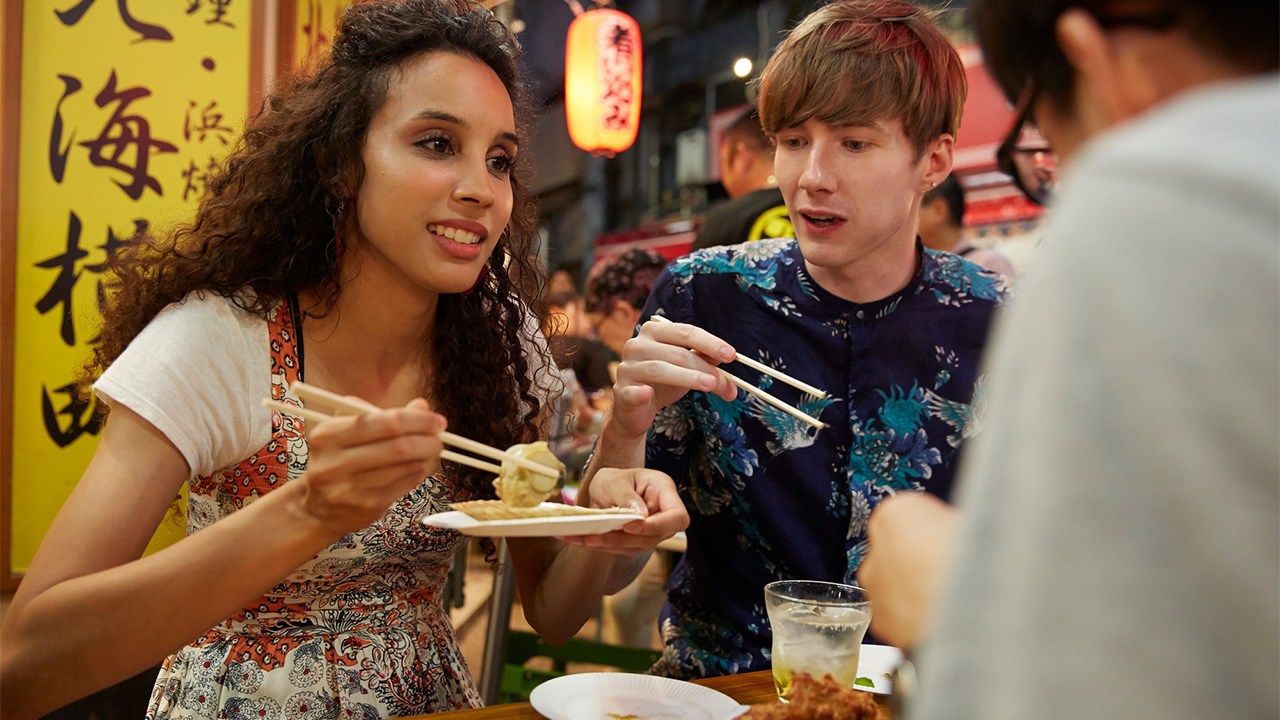 Economy Society Travel Sep 4, 2020
The pandemic has stopped foreign tourism to Japan, but a recent survey shows that the country still holds its allure as an overseas travel destination.

Inbound tourism to Japan had climbed to unprecedented levels until the coronavirus brought everything to a screeching halt. Since April, the number of foreign visitors to the country has plummeted an incredible 99.9% as the government rolled out a broad travel ban to prevent the introduction of COVID-19 from overseas. Although the border remains shut to most travelers, the situation has not dampened the enthusiasm of hopeful vacationers.

The Development Bank of Japan and Japan Travel Bureau Foundation conducted an online survey in June of would-be travelers in 12 countries to gauge how the coronavirus is affecting tourism sentiment. When asked about intentions to travel abroad after the pandemic, 82% of respondents expressed a desire to head overseas. Japan topped the list of post-corona travel destination, with 46% of people saying they wanted to visit. South Korea was second-most popular at 22%, followed by Taiwan in third at 17%.

Interest in coming to Japan was particularly high among survey participants living in Asian countries, with more than half choosing the country as their preferred port of call. The United States ranked first with respondents residing in Europe, North America, and Australia, but Japan was close behind in second, garnering more than 20% of votes as the most longed-for travel spot. 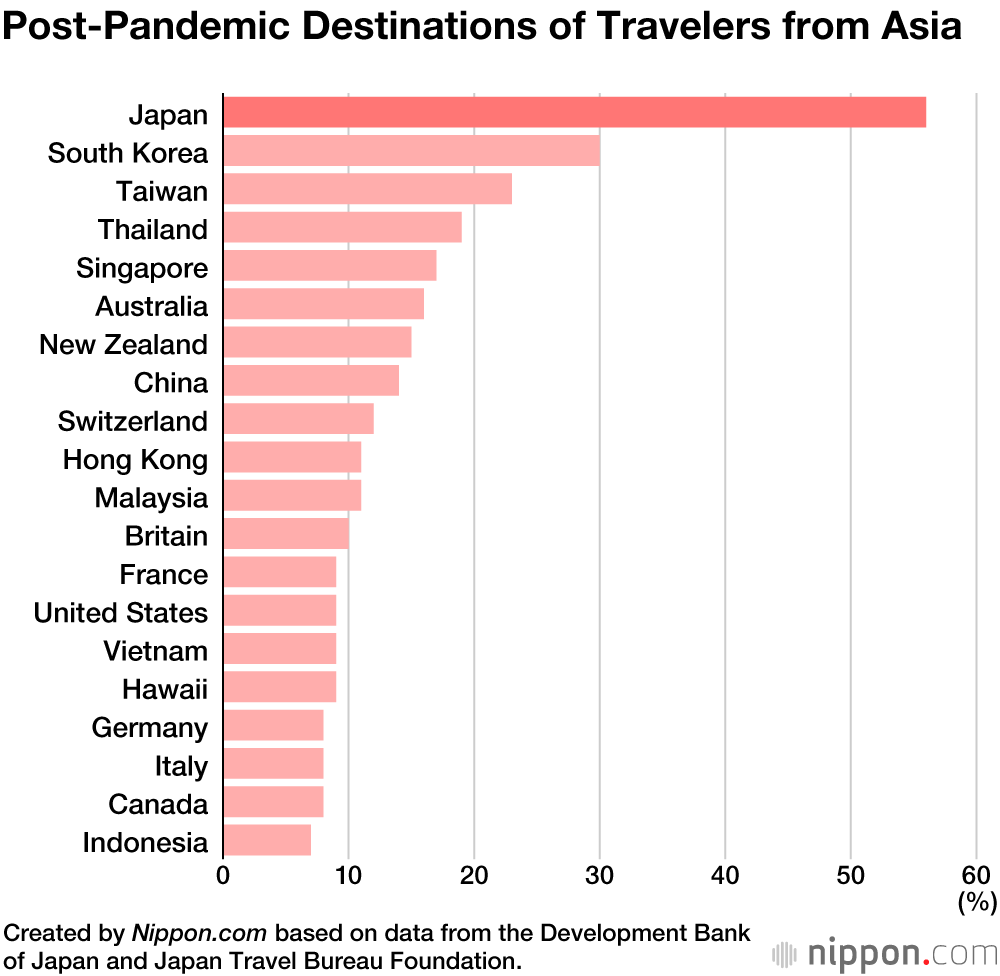 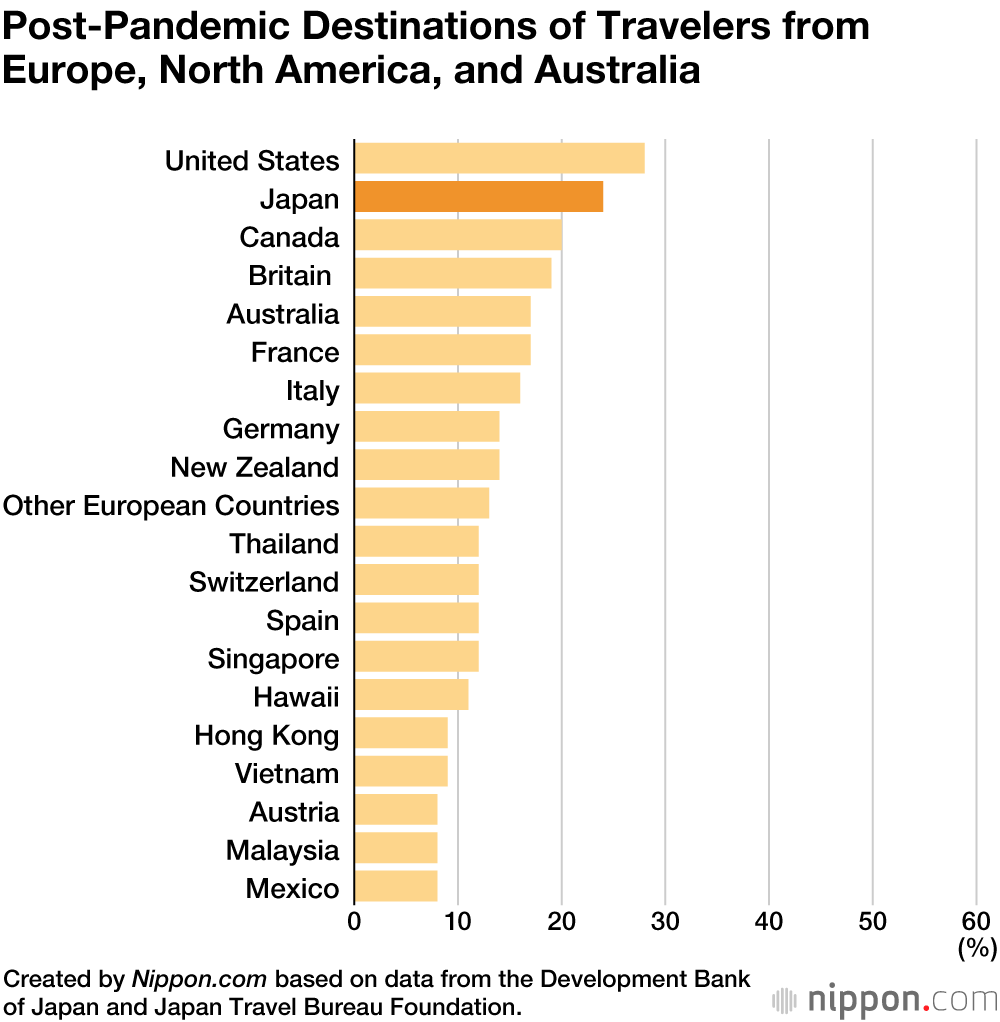 When asked about where they most wanted to stay in Japan, residents of Asia, Europe, and North America expressed a strong preference for onsen ryokan, traditional Japanese inns with hot spring baths. Traditional lodgings boasting hot springs are perennial favorites of overseas travelers, but their popularity fell several percentage points compared to previous surveys as respondents selected other types of accommodations, including Western-style luxury hotels. The DBJ suggests that the risk of being infected with coronavirus by an unknown person has made people wary of communal spaces, lowering the appeal of amenities like sprawling thermal baths and cramped saunas. 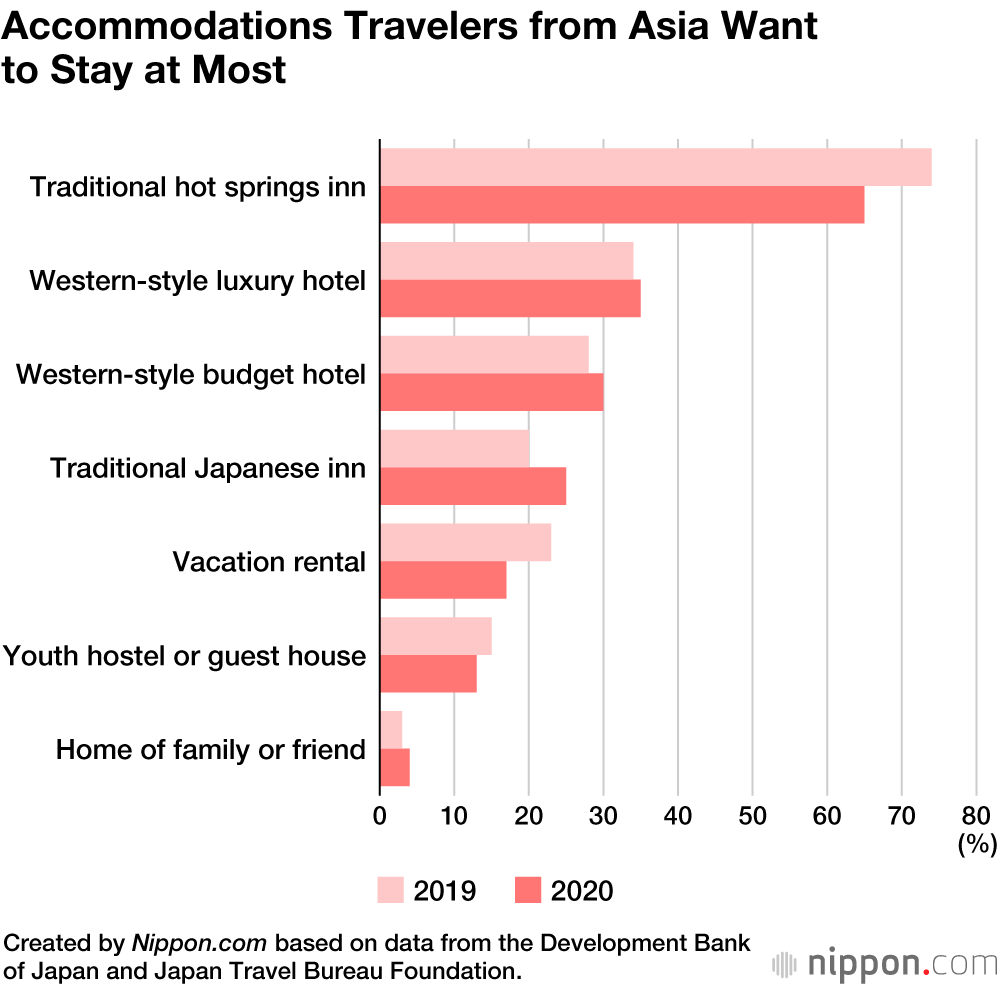 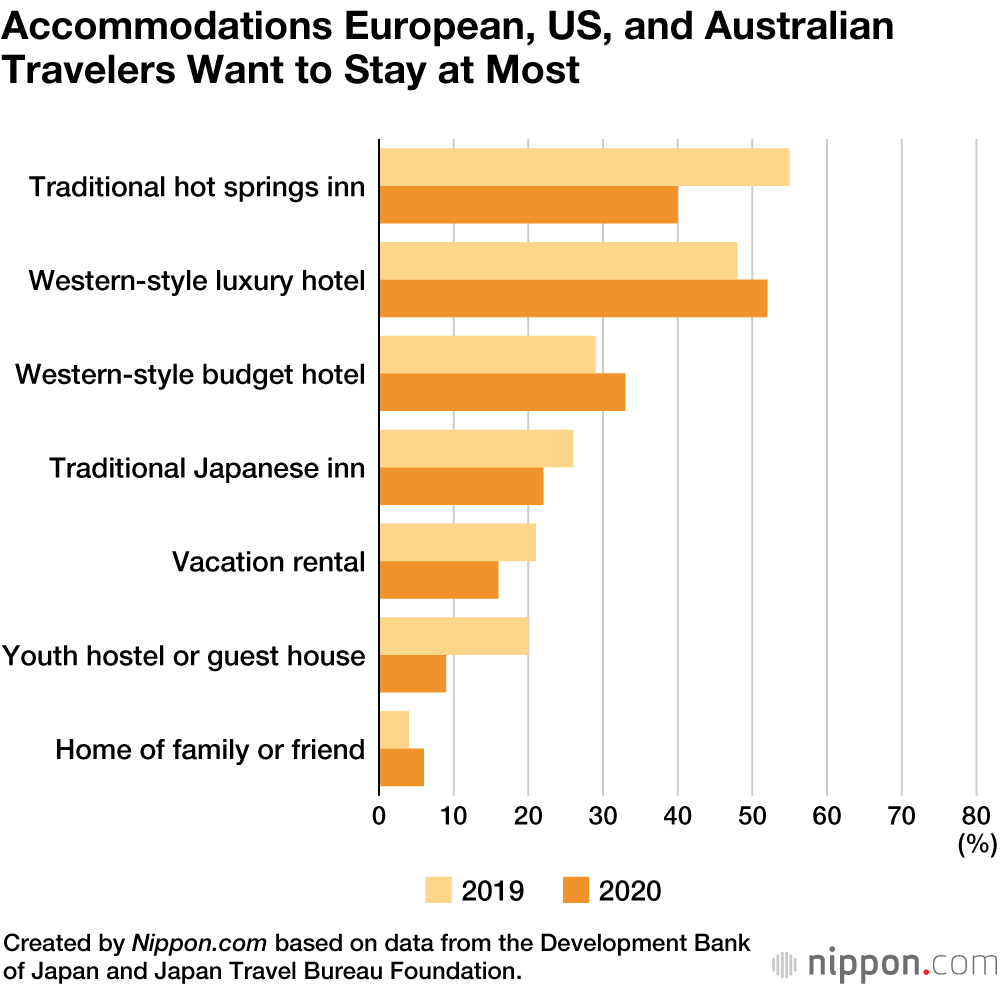 Survey participants who chose Japan as their top post-pandemic destination pointed to a number of factors in their decision. Leading the list was the quality of food in Japan at 43%, followed by having visited at least once before at 37%, the level of cleanliness at 36%, and the high degree of public safety at 33%. However, Japan received low marks as a foreign-language friendly country and few respondents were aware of the low number of COVID-19 cases compared to other popular tourist destinations.

Although Japan ranked high for food, it was several points behind Taiwan, which saw 49% of respondents point to dining as a motivating factor in wanting to visit the country. Japan’s neighbor to the southeast also impressed people as a place where the coronavirus is under control. 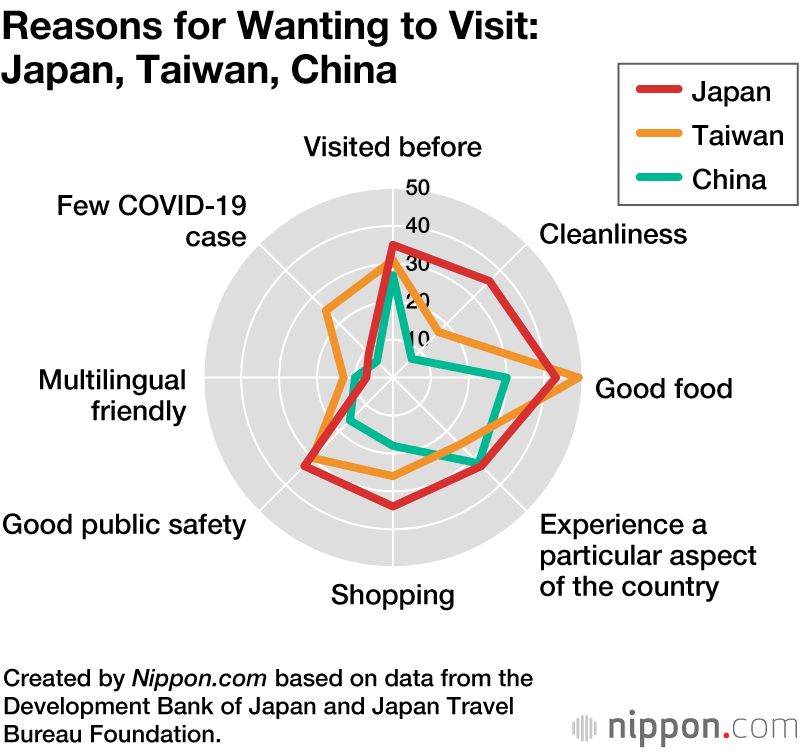 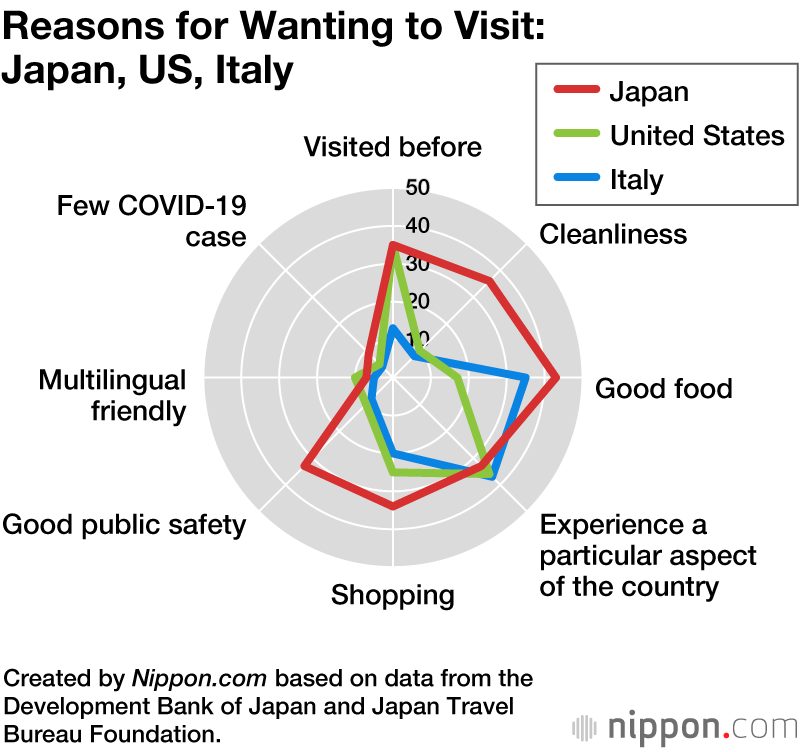 Among people hoping to travel to Japan, 47% chose Tokyo as the place they most wanted to visit. Hokkaidō was the second-most popular destination at 42%, followed by the Kansai region at 37%. Tourist spots like Yokohama and Hakone that are near Tokyo also ranked high, with 30% of respondents saying they were interested in exploring these outlying areas.