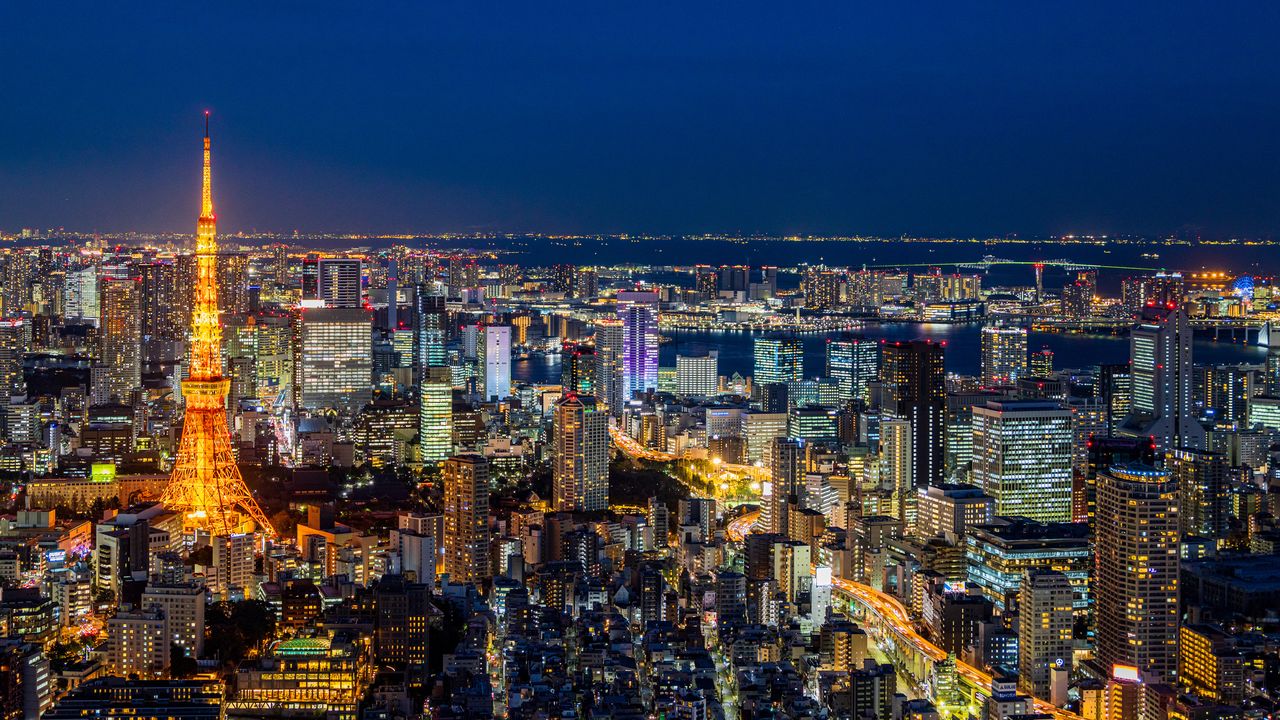 Architecture Travel Dec 23, 2022
Since its construction in 1958, Tokyo Tower has been a much beloved feature of the city, attracting many visitors each year.

The Beauty of Numbers

Tokyo Tower was opened to the public on December 23, 1958. Standing 333 meters high, at the time of building it was the tallest freestanding tower in the world, ahead of the Eiffel Tower. Total construction costs mounted to ¥2.8 billion, with 220,000 workers deployed, and in an age without computers, all calculations were completed by hand, but it still required only a year and a half to complete. The structure was designed to be resilient against earthquakes and other disasters. 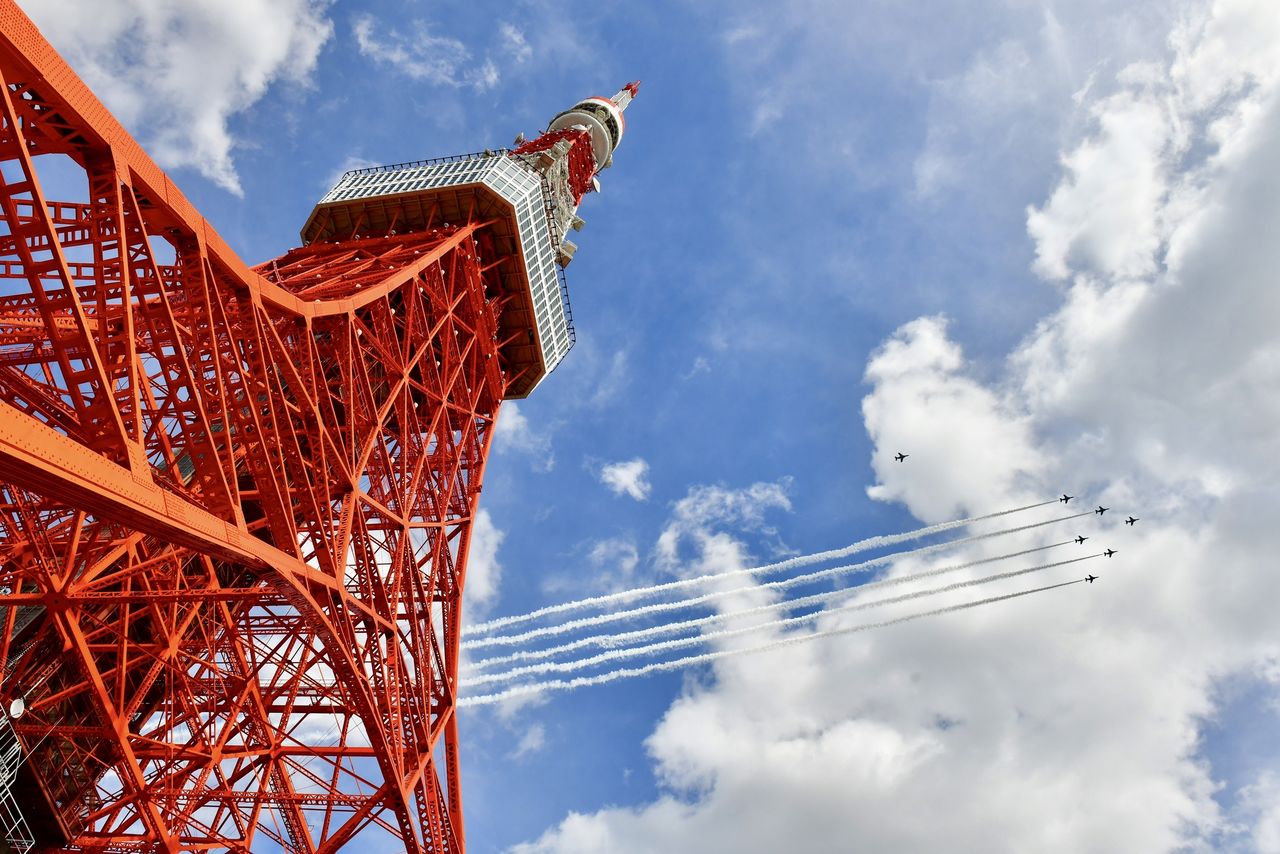 When architect Naitō Tachū was asked about the tower’s design, he said, “It was the result of seeking stability without waste. One might call it a beauty created by numbers.” Meanwhile, its distinctive red-and-white color combination—technically the red is described as “international orange”—is a requirement under the Civil Aeronautics Act for structures above a certain height. (Exceptions are made for structures outfitted with high-luminosity aircraft warning lights, explaining why the even taller Tokyo Skytree is not the same color.)

A view of skyscrapers from the main observation deck (left). Below is what looks like a miniature garden. © Nippon.com

Visitors can take a reservation-only Top Deck tour and look down from 250 meters up to see locations like the Mōri Garden at Roppongi Hills, the temple Zōjōji, and Shiba Park reduced to miniature gardens. The tour also takes in the Main Deck, at 150 meters, and there are welcome drinks and photography services available. It is also possible to climb up to the Main Deck in the open air, via 600 steps, taking around 10 minutes.

On the Big Screen

When it gets close to sunset, many couples and families come to Tokyo Tower. First, they can enjoy the tower illuminations, and then views of the city from an observation deck. 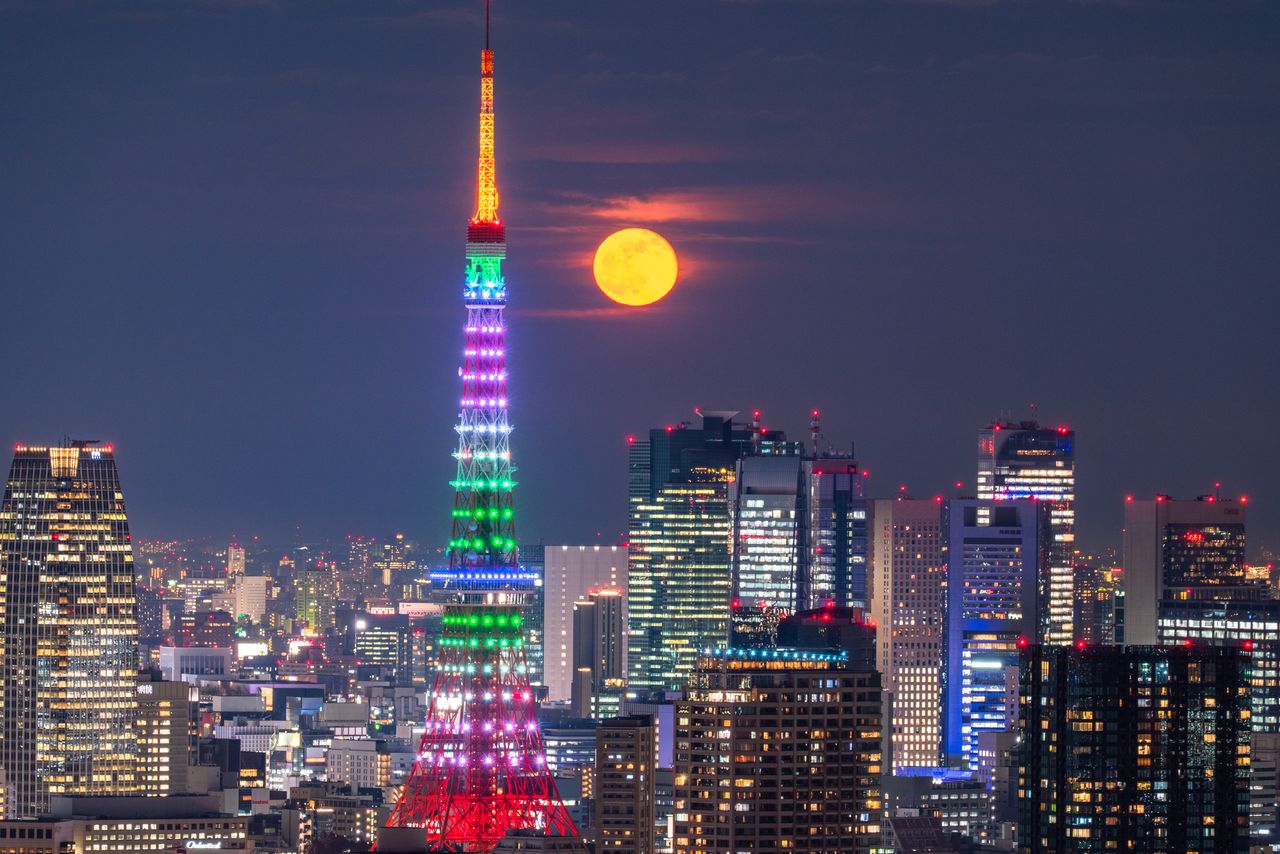 There are two main kinds of illumination at Tokyo Tower. The Landmark Light fixture, which seems to illuminate the tower from inside, is orange for most of the year, but switches to silver lights in summer. Its 180 lights are replaced by hand twice each year. Meanwhile, the Infinity Diamond Veil consists of 268 LED lights, which can create a huge range of patterns. It comes on every Monday evening, with different colors depending on the month. There are also special illuminations for events and promotions, and messages may be displayed on the window frames of the observation deck. 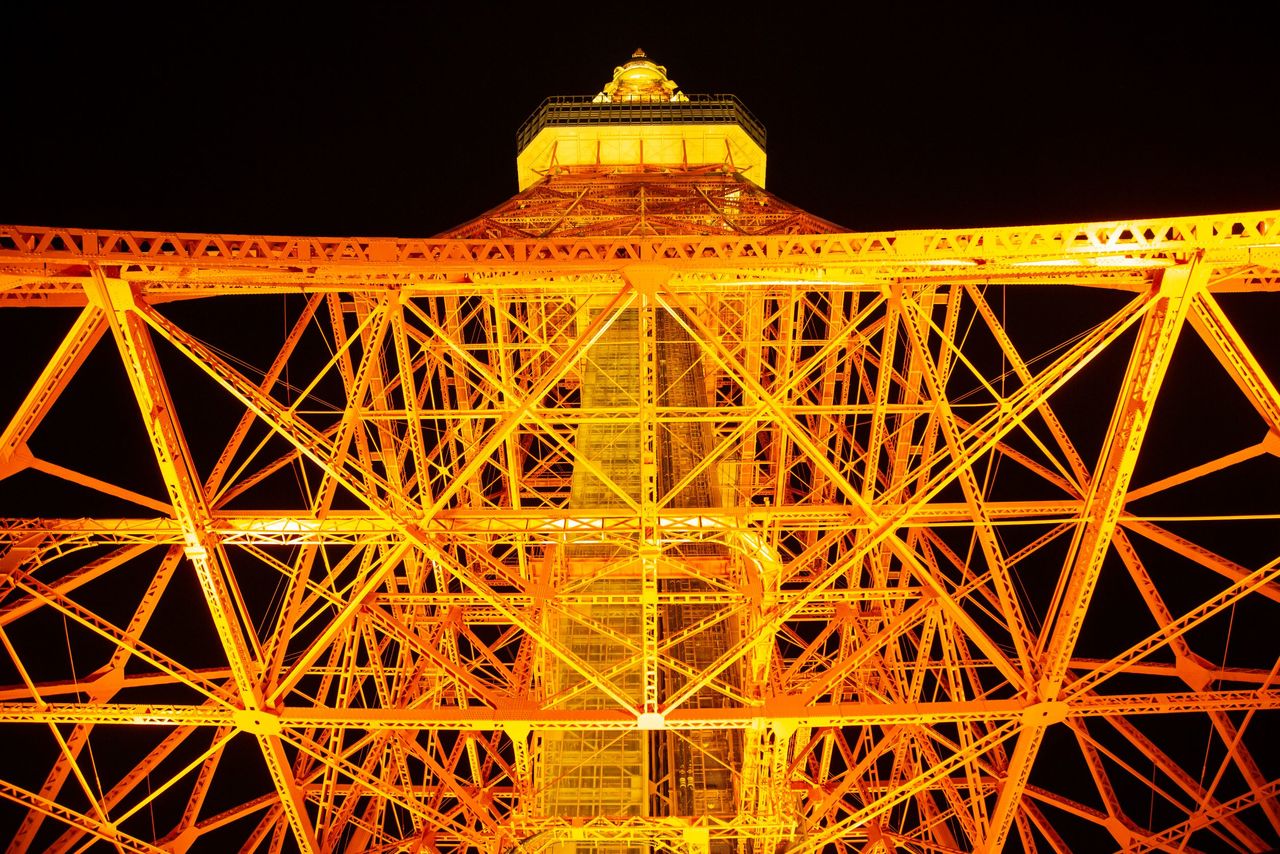 A view from the roof of the Foot Town building, looking up at the illuminated tower. (© Tokyo Tower)

Its association with the city’s postwar rise in prosperity may be why Tokyo Tower so often appears in films. It is featured under construction in the 2005 Always: Sunset on Third Street, and in its completed form in the film’s 2007 sequel. The tower has also been a regular costar to monsters like Godzilla and heroes like Ultraman, sometimes suffering destruction in the process. 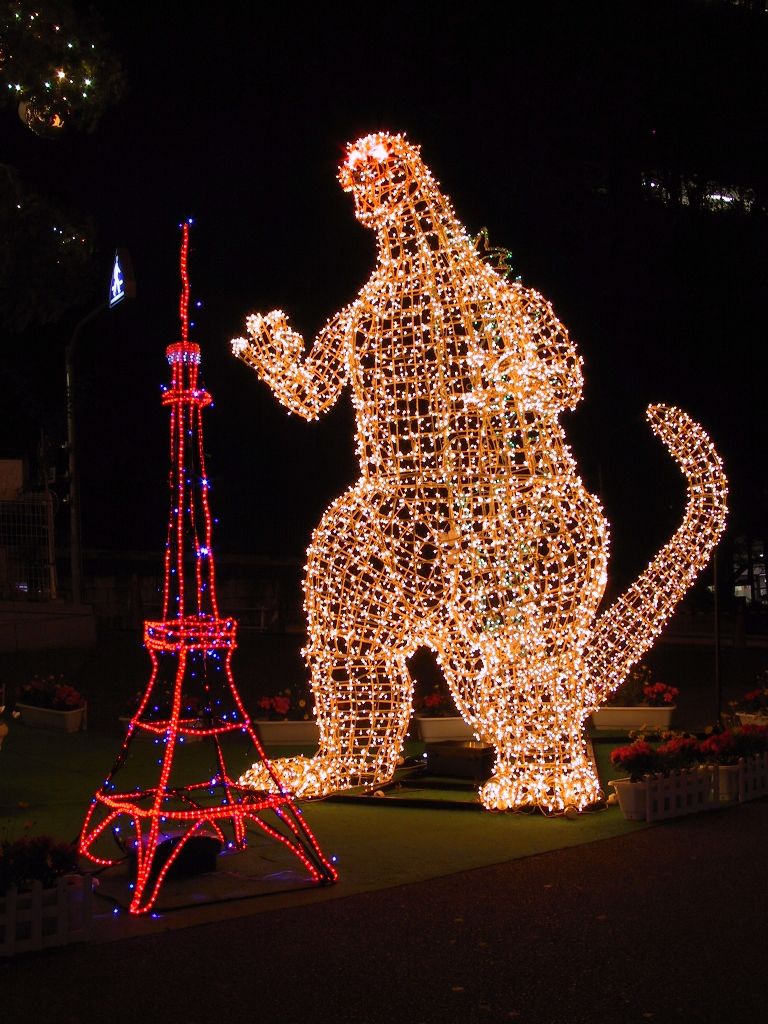 Tokyo Tower and Godzilla have shared the screen in many creature features. (© Pixta)

Even after the 2012 construction of Tokyo Skytree, which took over many of its functions, Tokyo Tower continues to operate as a radio tower, maintaining reserve broadcast equipment for digital terrestrial broadcasting, and transmitting some FM signals.

In 2013, it was registered as a tangible cultural property of Japan, and in 2018 its observation decks were renovated and renamed Main Deck and Top Deck to mark its sixtieth anniversary. That year, the total number of visitors to date topped 180 million.

Tokyo Tower can be appreciated through the seasons. Around Boys’ Day on May 5, 333 koinobori or carp streamers adorn the front of the tower, and at Tanabata on July 7 (the day when the Landmark Light feature switches to its summer color), there is special lighting representing the Milky Way. There are also occasional projection mapping shows. On nights with a full moon, to enjoy the lunar spectacle the top half of the lights are temporarily turned off. It is possible to reserve a place to view hatsuhinode the first sunrise of the year from the tower, while in summer the Highball Gardens are popular for beating the heat. Hato Bus tours that take in both the Skytree and Tokyo Tower also attract many visitors.

After more than six decades, Tokyo Tower retains its charms among both those who travel to the top or simply view from afar, and is an enduring symbol of the Japanese capital. 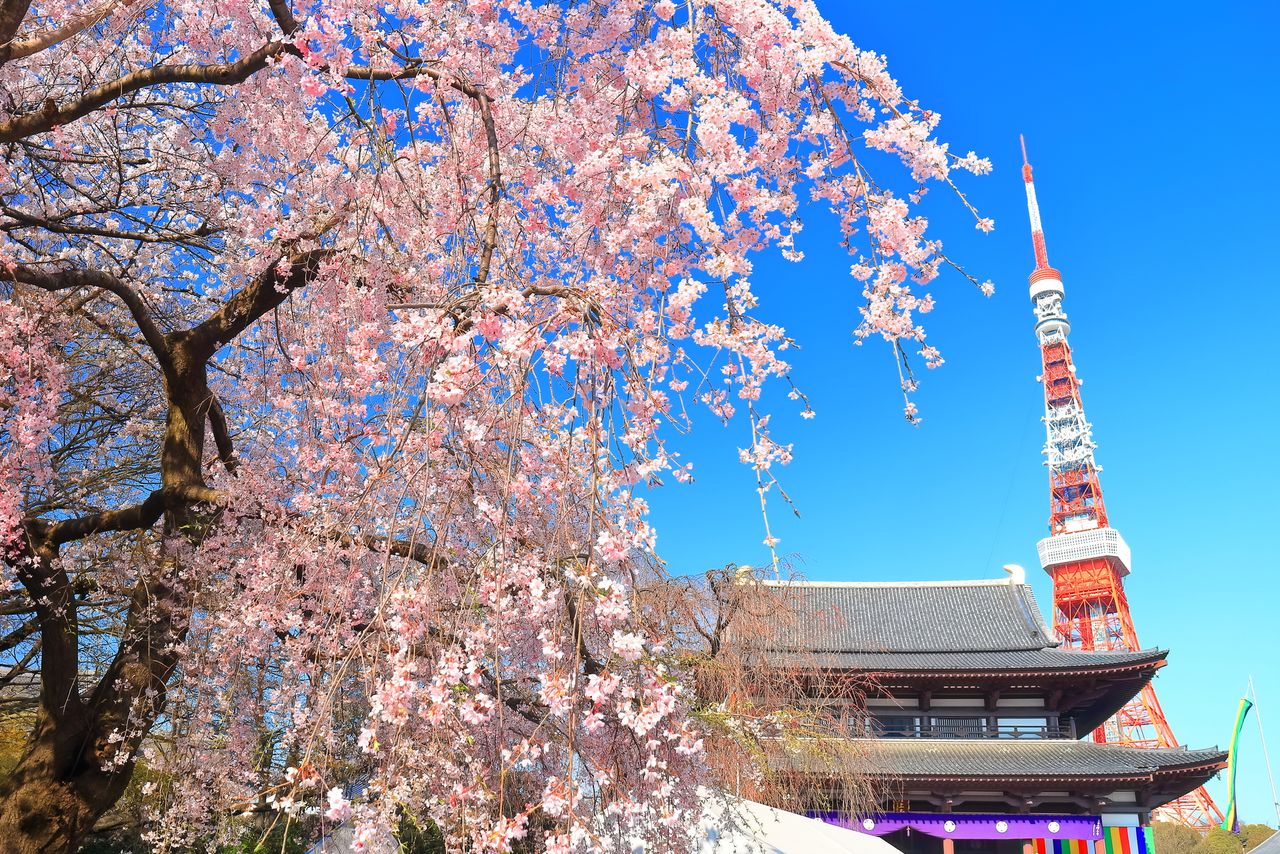 Cherry trees at Zōjōji with Tokyo Tower in the background.