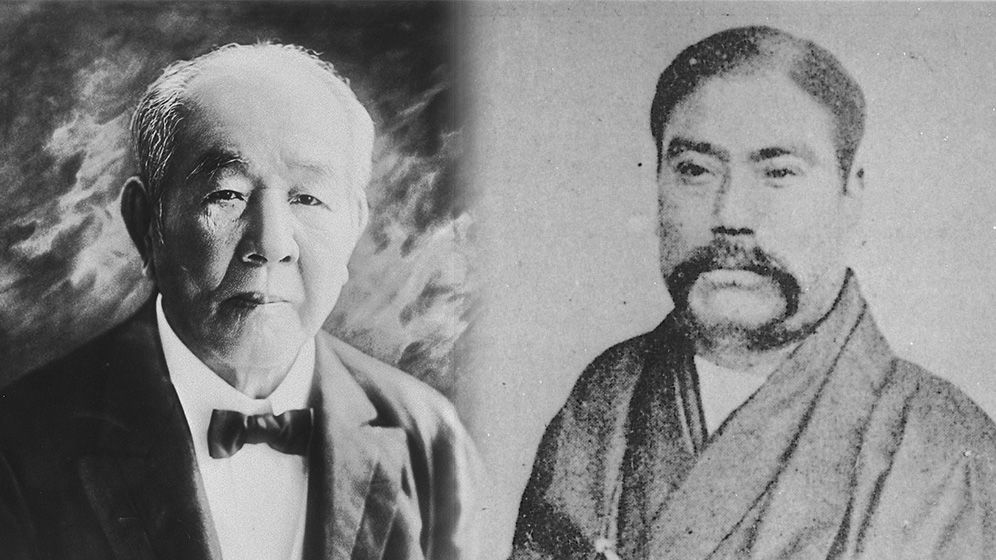 Rising in the World: The Roots of the Businessmen Who Built Japanese Capitalism

History Apr 1, 2019
Following the introduction of equality laws in the late nineteenth century, Mitsubishi founder Iwasaki Yatarō and the “father of Japanese capitalism” Shibusawa Eiichi both rose from common backgrounds to win places at the top of the business world. This kind of social mobility would have been impossible under the shogunate.

Japan’s samurai class nominally ruled over the common people—farmers, craftsmen, and merchants—during the Edo period (1603–1868). Following the Meiji Restoration, however, the new government instituted policies targeting greater equality. The samurai lost such privileges as the exclusive use of surnames and the rights to carry swords and kill commoners for showing disrespect. Although domains were abolished in 1871, the government initially took over the payment of the samurai’s hereditary stipends. As they accounted for 30% of the state’s financial resources, though, in 1876 stipends were replaced with government bonds. Finding it impossible to live on these alone, many of the former samurai (shizoku) used them as capital for starting out in business. Most failed miserably and found themselves living in reduced circumstances. Samurai ineptitude at commerce became proverbial.

Discontented former samurai swelled the ranks of the Freedom and People’s Rights Movement led by Itagaki Taisuke and others. Yet farmers, for whom political action had been banned during the Edo period, were also prominent in the cause. Swept along by this civil movement, the government was compelled to establish a national assembly, holding the first House of Representatives election in 1890. More than half of those elected were former commoners (heimin). In the later stages of the Meiji era (1868–1912), descendants of former commoners began to be chosen as cabinet members. After the Meiji Restoration, Japanese politics—formerly monopolized by the samurai—was radically transformed by its opening up to people from other backgrounds.

In a famous 1882 incident, Itagaki Taisuke was attacked while traveling in Gifu Prefecture, after which he is reported to have said, “Itagaki may die, but liberty never!” The scene is depicted here in the woodcut Itagaki-kun sōnan no zu (The Attack on Itagaki) by Utagawa Toyonobu. (Courtesy Kōchi Liberty and People’s Rights Museum) 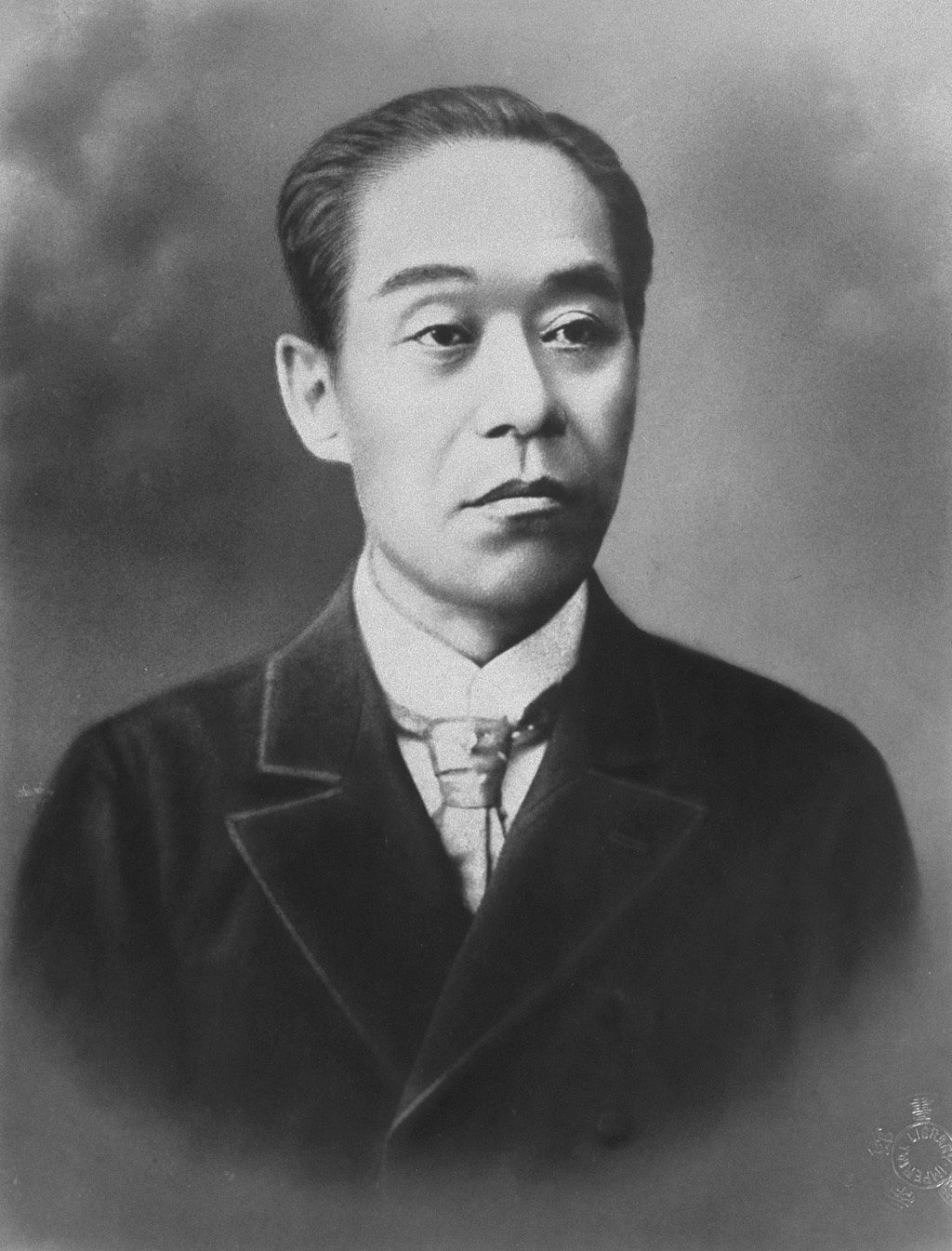 In addition to politics, heimin increasingly contributed to society at a high level in fields including economics, the bureaucracy, and education. Coming from a nonsamurai family was no longer an obstacle to rising in the world. The educator Fukuzawa Yukichi inspired young people with common roots to think big in his bestseller Gakumon no susume (An Encouragement of Learning), which begins with a famous statement on inherent equality: “It is said that heaven does not create one person below or above another person.” In the book, he asserts that education makes the difference between the rich and poor, influencing social position. “It is only the person who has studied diligently, so that he has a mastery over things and events, who becomes noble and rich, while his opposite becomes base and poor.” [Translations from Wm. Theodore de Bary, Sources of Japanese Tradition, 1600 to 2000, Part 2 (2006).—Ed.] His words resounded with the Japanese public, and An Encouragement of Learning went on to sell 3 million copies. Considering the many readers who must have perused borrowed books or hand-copied versions, it was enormously influential.

In this article, I will talk about two businessmen who shot to distinction from obscure roots following the introduction of equality laws. Iwasaki Yatarō and Shibusawa Eiichi had very different attitudes to their work, but were both major players in the establishment of capitalism in Japan.

Iwasaki Yatarō (1835–85) was born in a village in the Tosa domain (now Kōchi Prefecture). His great-grandfather had fallen on hard times and sold the family’s samurai status, so the Iwasakis ranked below the village headman. His father Yajirō was stubborn by nature, and his refusal to back down in an 1855 dispute led to the headman’s followers beating him up and seriously injuring him. Incensed, Iwasaki made a formal complaint with the magistrate. When this went nowhere, he scrawled an accusation of corruption on the wall of the magistrate’s office and was thrown into prison.

During his incarceration, another inmate taught him arithmetic, which proved a boon in his later business career. After his release, he came to know the samurai Yoshida Tōyō (1816–62), who had been influential in the domain’s politics, but temporarily out of favor and living near Iwasaki. In another stroke of unexpected fortune, Yoshida recognized the young man’s talent and found him a post as a minor official. In 1867, Iwasaki’s arithmetical ability helped him win an appointment running the Tosa domain’s trading office in Nagasaki. Much of his work involved arranging deals with foreign traders. He also dealt with the accounts for the pioneering company Kaientai, established by Sakamoto Ryōma. Iwasaki found a kindred spirit in Sakamoto and learned a lot from his approach to the changing times.

The Tosa trading company moved into the shipping business after the Meiji Restoration, but had to strike out as an independent firm when the domains were abolished. In 1873, it adopted the name Mitsubishi. Iwasaki told his employees of his great ambitions to drive out powerful foreign shipping companies and establish sea routes across the globe. Japan’s 1874 punitive expedition to Taiwan in retaliation for the murder of its sailors by indigenous people was a big break for the company, as foreign rivals pleaded neutrality and refused to transport Japanese soldiers and provisions. Meanwhile domestic competitors balked at the risks. Only Iwasaki accepted the government offer.

“Every life will certainly have one golden opportunity. But the mediocre fail to grasp it, so it slips away. . . . To seize it requires penetrating insight, meticulous attention, and intrepid courage.” Iwasaki’s words suggest that he may have seen the Taiwan expedition as a once-in-a-lifetime chance for Mitsubishi. 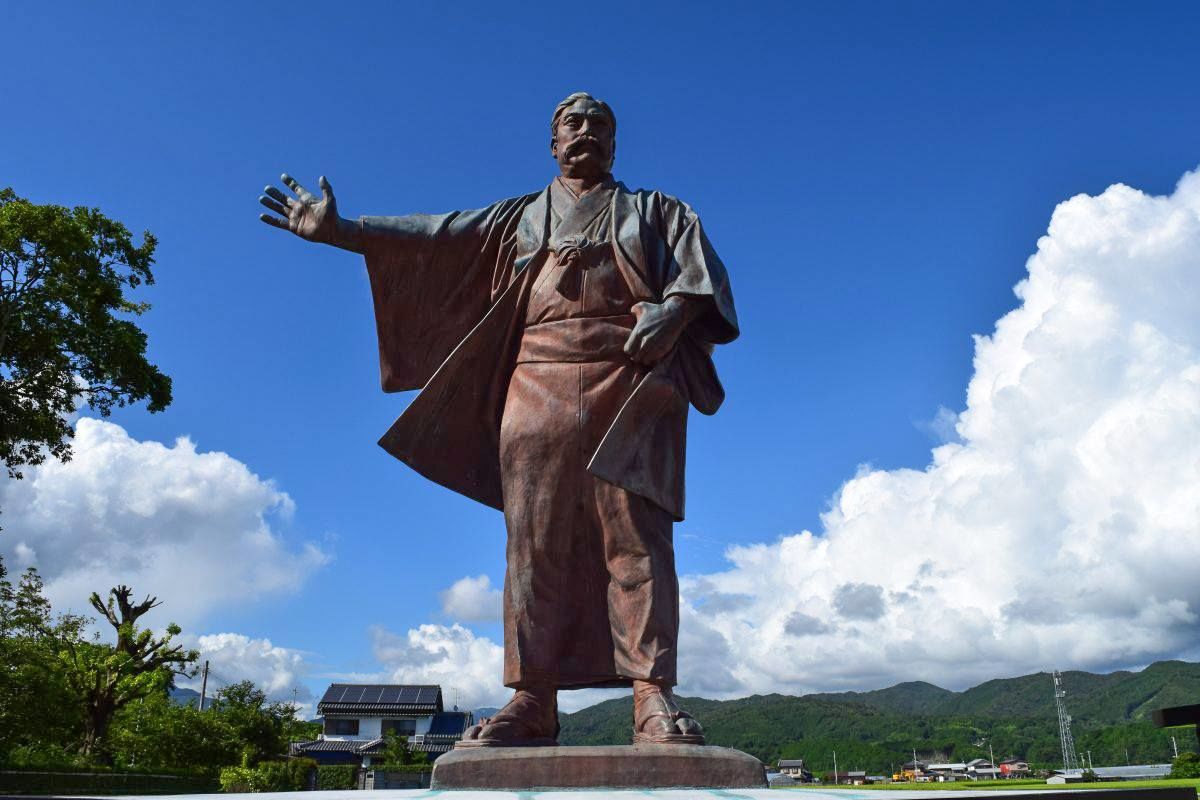 The company’s reliable performance won the trust of the government’s most powerful statesman, Ōkubo Toshimichi. Mitsubishi was again tapped to provide transportation during the Satsuma Rebellion of 1877. With the backing of the government, Mitsubishi soon became Japan’s biggest shipping company.

After Ōkubo’s assassination in 1878, Mitsubishi relied on Ōkuma Shigenobu, but he was a relative political outsider and eventually forced from government in 1881. The dominant Satsuma-Chōshū faction was hostile to Mitsubishi, which had provided capital to Ōkuma, and began efforts to destroy it. The government supported the establishment of a rival shipping company called Kyōdō Un’yu with funding from the firm Mitsui and others. Iwasaki refused to yield, setting off a fiercely competitive battle over costs and ship speeds that threatened to bankrupt both companies. The shocked government tried to persuade him of the merits of a merger between Mitsubishi and the new company, but Iwasaki refused to consider it. However, in 1885, while the struggle was still ongoing, he died of stomach cancer at the age of just 50.

Iwasaki’s brother Yanosuke took over the company. He gave up the unprofitable struggle, agreeing to a merger between Mitsubishi’s shipping division and Kyōdō Un’yu. Thus, this business built up solely by Iwasaki Yatarō’s efforts left the family’s hands. Mitsubishi, however, expanded its business in such other fields as mining, shipbuilding, real estate, and banking, growing to become one of Japan’s great zaibatsu.

Shibusawa Eiichi (1840–1931) was born in a village in what is now Saitama Prefecture in 1840. The Shibusawas were a rich farming family who also earned money through raising silkworms, making and selling fermented indigo leaves for use in dye, and lending money to other villagers. Eiichi was the oldest son and his intelligence from an early age meant his parents had high hopes for him. According to one anecdote, his love for books was such that at 12 years old, he fell in a ditch while engrossed in reading and returned home covered in mud. 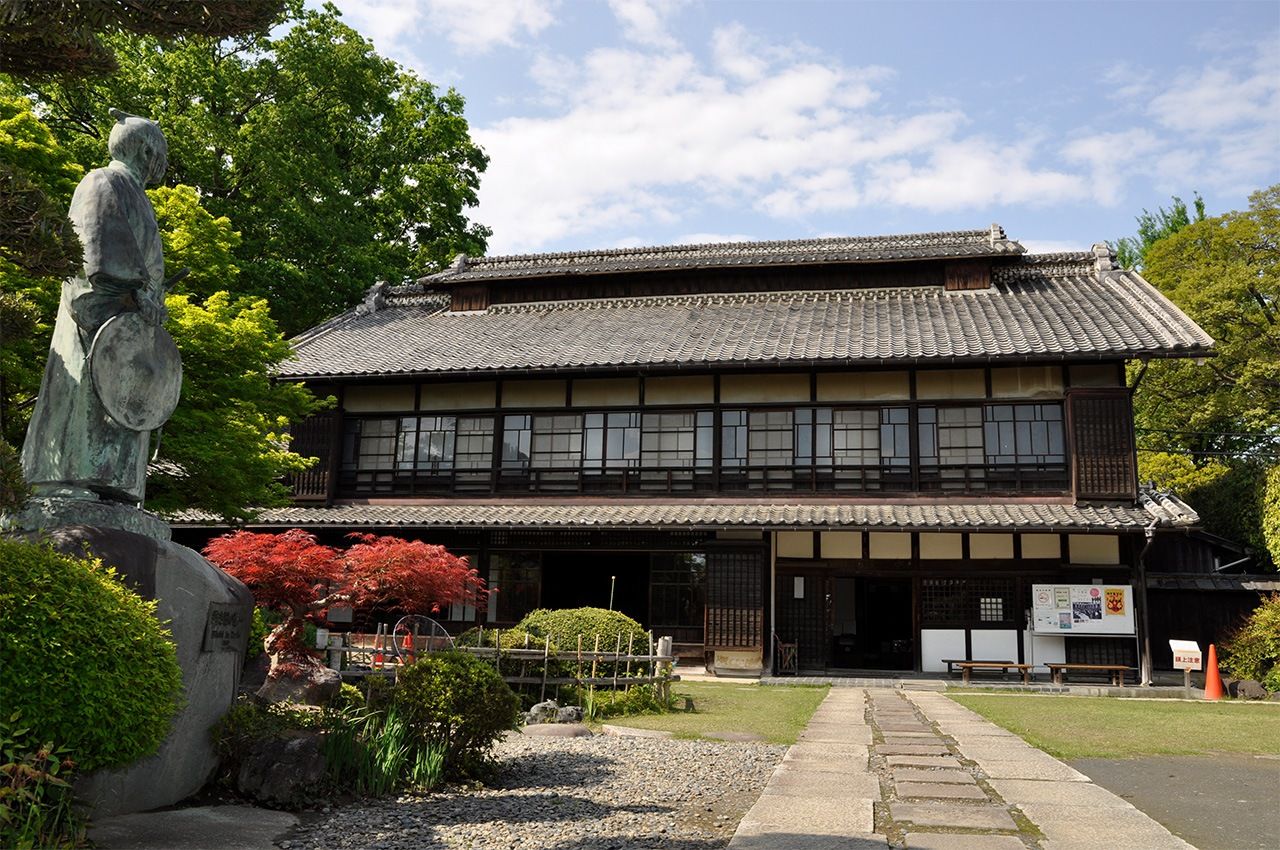 Fired by imperialist ideology, in the last years of the shogunate, Shibusawa made plans to attack Takasaki Castle in what is now Gunma Prefecture, yet did not carry them out. This belligerent phase did not last, as he then entered the service of Tokugawa Yoshinobu—who became the last shōgun in 1866—and traveled as part of the ruler’s younger half-brother Akitake’s retinue to the Paris International Exhibition in 1867. This brought the opportunity to visit a number of European countries and learn about their culture and society. 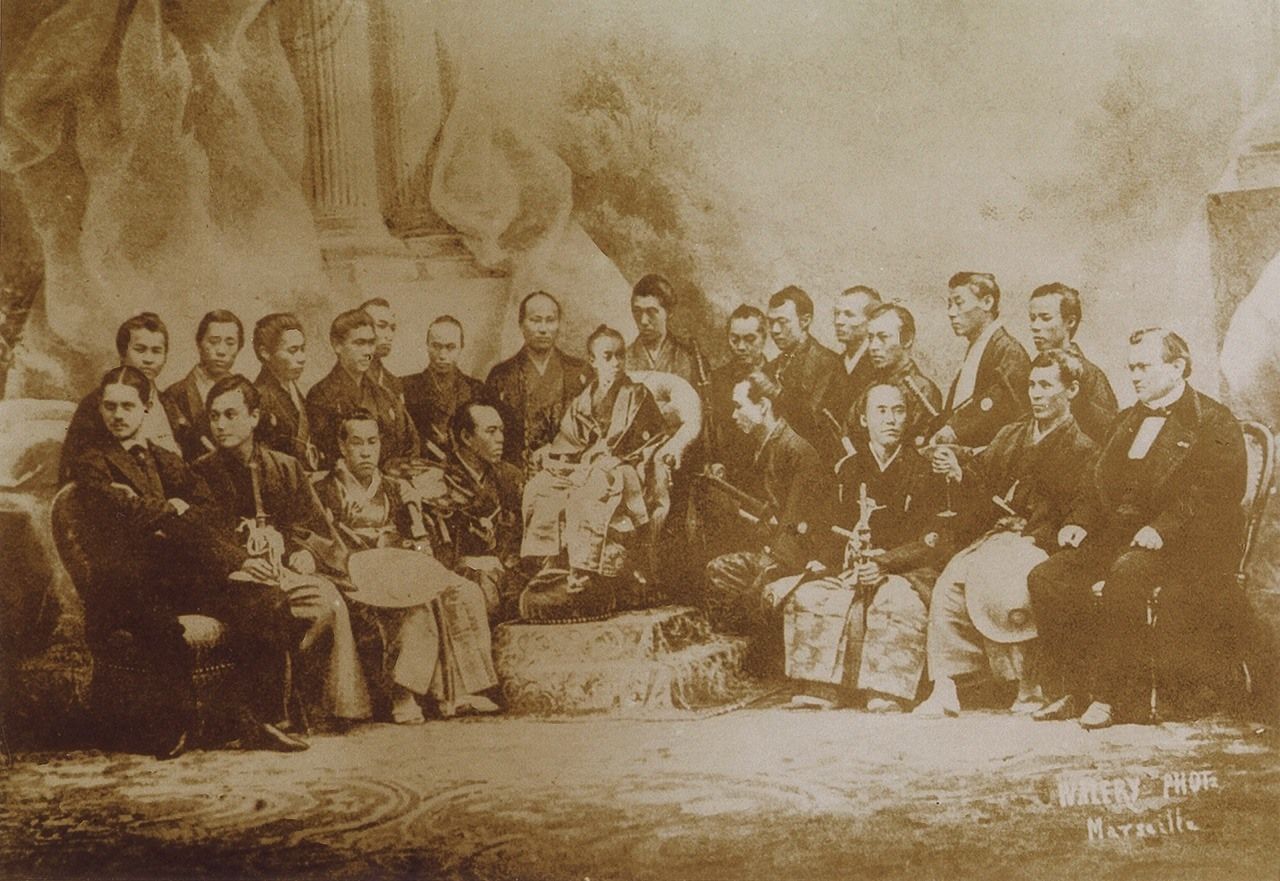 The group who traveled to the Paris International Exhibition in 1867. Shibusawa Eiichi is to the far left of the back row. (Courtesy Shibusawa Memorial Museum, Kita, Tokyo) 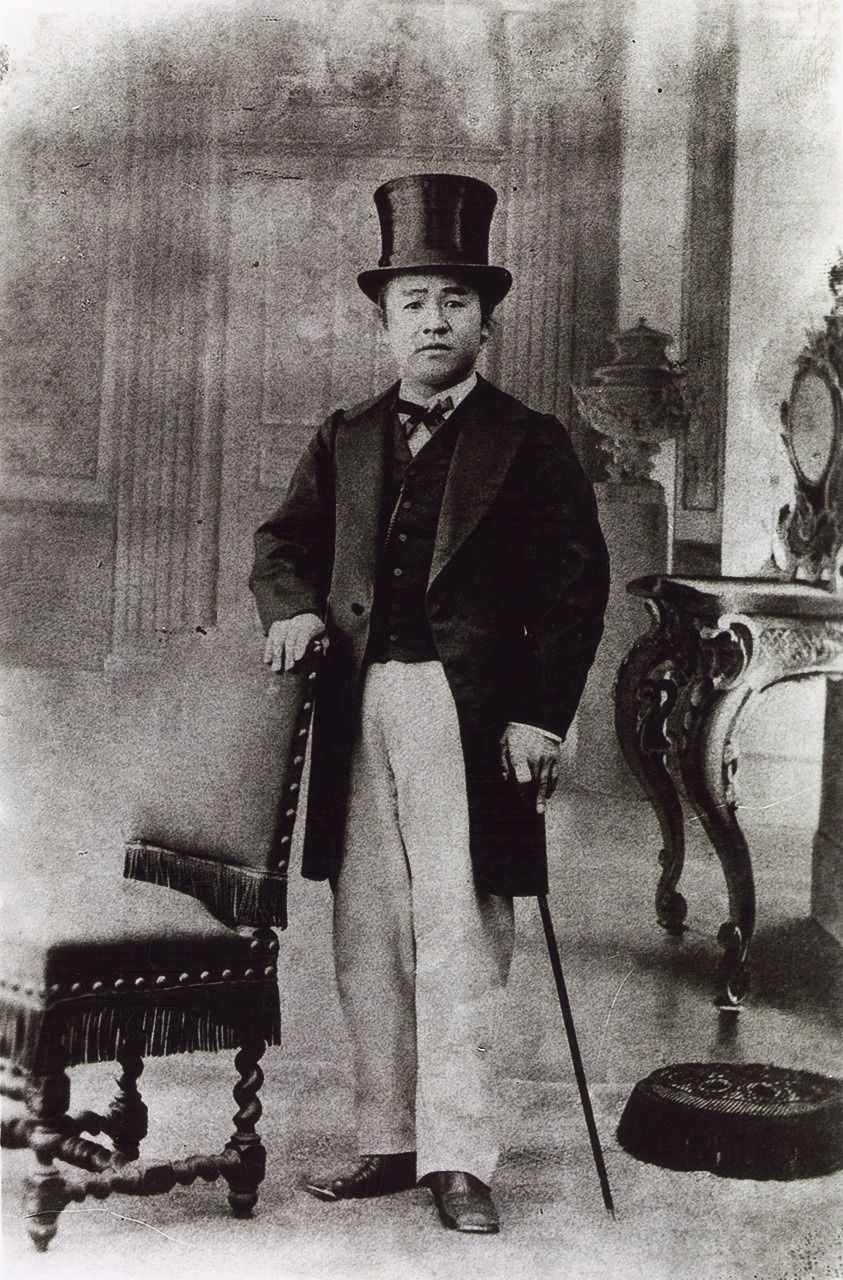 After the Meiji Restoration, Shibusawa became chief of the tax bureau and a Ministry of Finance official in the new government. He also helped to establish the First National Bank. In 1873, he quit his government role to become a private entrepreneur. He was involved in the founding of such major firms as Ōji Paper Company, Osaka Spinning Mill, Tokio Marine Insurance, and Mitsubishi’s rival Kyōdō Un’yu. In the course of his lifetime, he helped found some 500 companies, although often not for his own benefit. He owned almost no stock in these companies, and tended to withdraw once they were off the ground. He believed that Japan needed to rapidly establish a modern industrial base to compete with the commercial might of the Western powers. This is why he also strove to set up many economic groups like the Tokyo Chamber of Commerce, where he served as president and actively conveyed the business world’s needs to the government.

Impressively, Shibusawa’s achievements were not limited to business. He contributed greatly to education through his involvement in the founding of numerous schools. In his later years, he took a step back from commercial activities to put his energies into philanthropy, working as head of a welfare home supporting disadvantaged children and others. At the same time, he acted in a private capacity to visit Western countries and promote peace and exchange. He died in 1931 at the age of 91.

While they took contrasting approaches to expanding their business, both Iwasaki and Shibusawa contributed greatly to the development of capitalism in Japan. Without moves to institute equality, however, they would probably never have had the opportunity to do so. In this sense, the Meiji Restoration brought fundamental change to Japanese society.