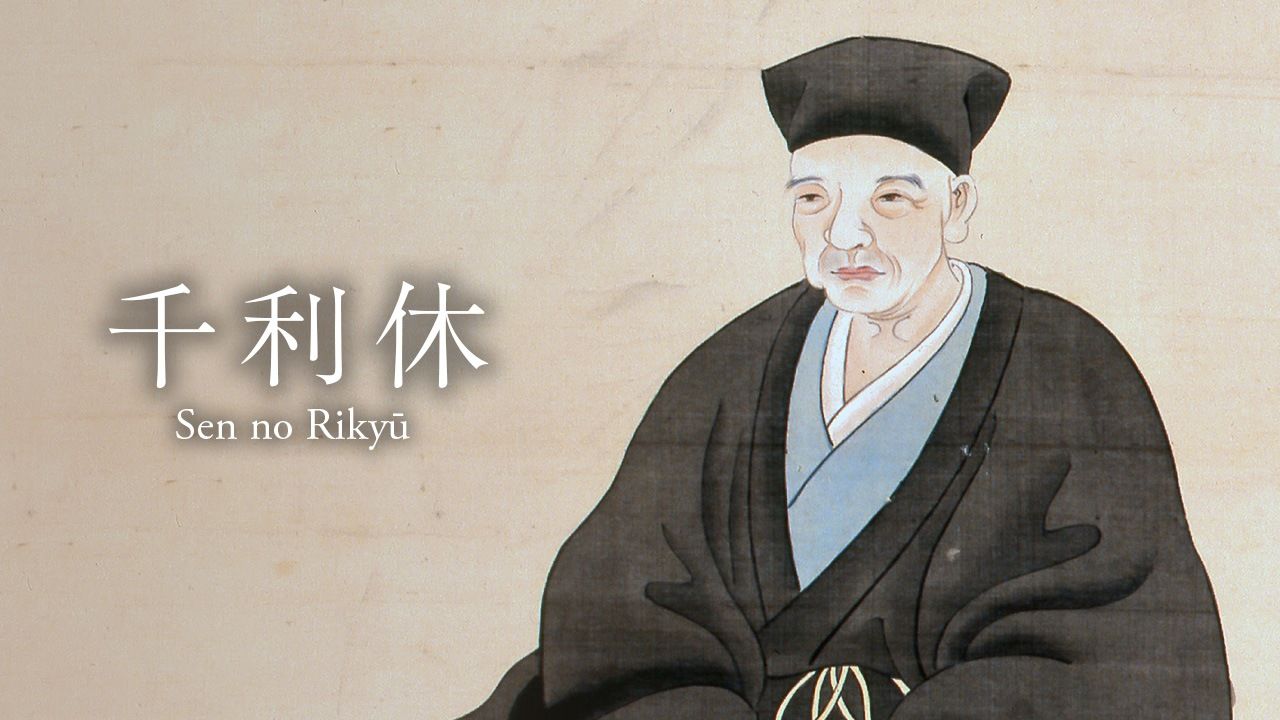 Sen no Rikyū: Appreciation of Nature Fused with Aesthetic Sense

Culture History People Sep 3, 2021
Tea master Sen no Rikyū (1522–91) is considered the greatest of the “tea saints.” He was an aesthetic revolutionary who transcended his era—fusing an aesthetic sense with appreciation of nature, expressed in physical forms such as tea houses and Raku ware tea bowls.

The custom of drinking tea spread from China worldwide, by both sea and land. Wherever tea went, it gave birth to utensils and refreshments suited to the environs, as well as the development of unique customs and cultures. In Japan, the obsession with tea led to the construction of exquisite tea houses; Sen no Rikyū built on this concept and designed restrained tea rooms with the least floor space possible.

The style of drinking powdered green tea, whisked in a bowl, was introduced into Japan from Song Dynasty (960–1279) China in the late twelfth century. The samurai, who had wrenched control of Japanese society from the aristocracy, became the main proponents of this new manner of consuming tea.

Sen no Rikyū was born into a renowned merchant family in Sakai, in present-day Osaka Prefecture, in 1522. He received an education fit for an heir, and began training in the tea ceremony to acquire grace from the age of 17. Japan’s military government of the era, the Ashikaga (Muromachi) shogunate (1333–1568), was losing its grip on power, leading to turbulent rivalry between various regional warlords. Yet the port city Sakai flourished through trade with Ming Dynasty​ (1368–1644) China, and with Spain and Portugal from the mid-sixteenth century.

This bustling city was a setting for exchange among merchants and equal-footed negotiations with samurai. Small gatherings for enjoying tea were commonplace. The preferred beverage was matcha, produced from young tea leaves, steamed, dried, then ground to a powder with a stone mill. To serve, hot water is added and the matcha whisked. Over the centuries, aficionados worldwide became obsessed with the utensils used to prepare their tea. In Europe, the introduction of tea from China led to an infatuation with chinaware, and Chinese implements were also prized in Japan.

But while Europeans strived to imitate chinaware, Japanese tastes turned to Korean ceramics—modest pottery that would have been spurned in China. Fascination also grew for tea caddies—the larger chatsubo and smaller chaire. A missionary to Japan was bewildered at the Japanese trade in these smaller containers. While appreciating their lustrous glaze, he was dumbfounded at the reverence given to things so small as to look like “little more than a water dish for a tiny bird.”

Sakai, like Venice, was a largely autonomous city run by merchants, and a cultural beacon on a par with Kyoto. Merchants made their fortunes in international trade, and many were accomplished tea masters. Notable among them were Imai Sōkyū (1520–93) and Tsuda Sōgyū (d. 1591). Rikyū’s business was not of the same scale, but he gained recognition after hosting a tea party at just 23, and was known among his peers as a tea master with a unique aesthetic sense.

Despite the low social standing of the merchant class, Rikyū rose to prominence through his association with the military leader Toyotomi Hideyoshi (1537–98), who established a centralized government as the successor to Oda Nobunaga (1534–82). Both Nobunaga and Hideyoshi sought to exert their influence through tea parties, where they displayed the famed utensils of their predecessors and the enemies they had vanquished.

In 1575, Rikyū, aged 53, was selected from among the many tea masters available to perform the tea ceremony on behalf of Oda Nobunaga at a party he hosted. In 1583, a year after Nobunaga’s death, Rikyū prepared tea on behalf of Toyotomi Hideyoshi at a party he hosted. Hideyoshi’s love for tea utensils was public knowledge, and consequently, subjects presented him with valuable implements to curry his favor. Rikyū encouraged daimyō feudal lords to bequeath utensils to Hideyoshi and even spurred warlords to join Hideyoshi’s army. Consequently, Hideyoshi secured the courtly title of chancellor (dajō-daijin), and established his centralized Toyotomi government in 1586. Rikyū was seen as a forceful proponent of the government alongside Hideyoshi’s half-brother Hidenaga.

Rikyū maintained this close association so long as Hidenaga remained in the government. But as Hideyoshi strengthened his control, he restructured the bureaucracy, making Rikyū superfluous. After Hidenaga died in 1591, Hideyoshi gave orders to eliminate Rikyū. Some have speculated that the purge of Rikyū and subsequent order for his execution were sparked by conflict within the Toyotomi regime. Nevertheless, many had been mesmerized at Rikyū’s tea parties, and found it hard to accept his death as it unfolded in the ugly realm of politics.

Rikyū’s legacy endured, as he came to be immortalized for dying before attaining his full potential in his art. In the traditional Japanese view of life and death, if solemn memorial was denied to such souls, it would invite calamity. Sugawara no Michizane (845–903), scholar, poet, and politician in the Heian Period (794–1185), and Taira no Masakado (d. 940), a provincial magnate and samurai, both met with unfortunate ends, and were subsequently deified in shrines around the nation.

But there is no shrine dedicated to Rikyū, because his followers wished to pay their respects by maintaining his tea traditions. Memorial services and tea ceremonies are held on the anniversary of his death by the tea schools of his successors and many of his followers. In 1991, on the 400th anniversary of his passing, the Kyoto National Museum held an exhibition dedicated to Rikyū. Lasting interest in tea has crafted a structure that prompts us to consider the meaning of Rikyū’s death.

In 1595, Hideyoshi pardoned Rikyū’s two children, who were banished from Kyoto, and returned Rikyū’s tea utensils to his grandson, Sen no Sōtan. Three sons of Sōtan were embraced by powerful daimyō families, securing his posterity. This led to the founding of the three major schools of Japanese tea ceremony—Omotesenke, Urasenke, and Mushakōjisenke, which continue to this day.

The task of perfecting Rikyū’s tea practice passed to the three branches of the Sen family and later tea masters. In a later century, the successors of Karl Marx were similarly entrusted with completing his unfinished Das Kapital, and today the ideal image of his thought, which they supplemented, is described as “the true meaning of Marx.” Rikyū himself added Zen Buddhist and philosophical elements to tea traditions he inherited from Murata Jukō (1423–1502), a mid–Muromachi Period tea master, and Takeno Jōō (1502–55), who instructed him. He imbibed the practice with a spirituality that surpassed art. The masters who came after Rikyū described his vision of tea as wabi-cha, emphasizing its simplicity; while this esoteric meaning may be poorly grasped even by Japanese people today, the way it has come to its full form after Rikyū’s death should be comprehensible to those who see how Marxism has taken shape.

Historical documents from Rikyū’s time reveal how he strived to create a unique interpretation for tea, including everything from the bowls and other implements to the tiny tea room just one and a half tatami mats (less than 3 square meters) in size he created to pursue the art. In a space this confined, where the guest can hear the host’s heartbeat, we sense the philosophy behind Rikyū’s tea practice, emphasizing spiritual communion. Translucent shōji paper windows and flimsy walls allowed participants to sense natural flux outside. Japanese see no sharp distinction between humans and the natural world to which they belong, but it was Rikyū who gave this vagueness physical expression. 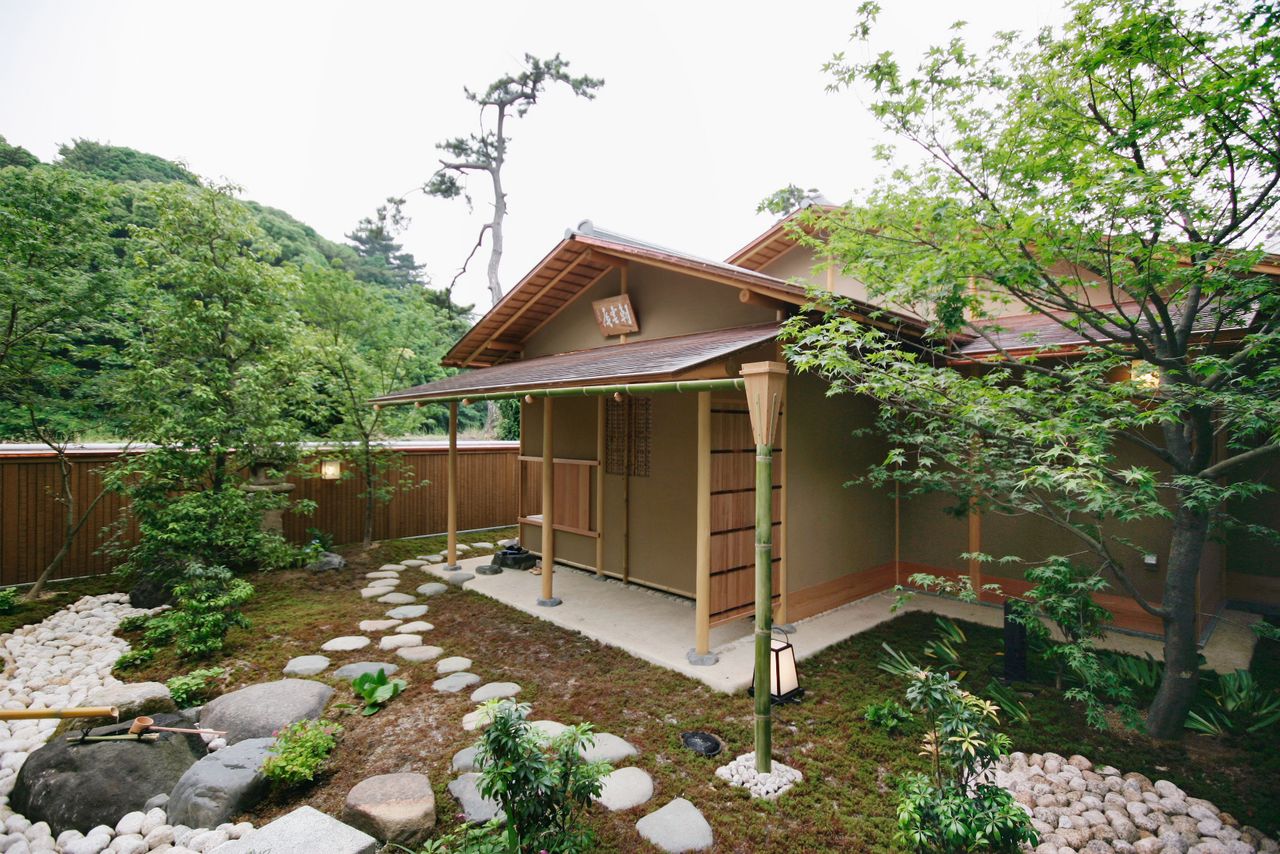 Chōun-an, in Sakai, Osaka Prefecture, is the reconstruction of a tea house built by Rikyū 420 years ago. (© Jiji)

Rikyū designed tea bowls to his tastes and entrusted the renowned potter Tanaka Chōjirō with their realization. Chōjirō was the first in the Raku lineage of potters, the makers of Raku ware. The choice of Japanese ceramics over imported bowls was an innovation in tea. Because Raku ware is shaped by hand rather than thrown on a potter’s wheel, it sits snugly in human hands.

Tea enthusiasts love to admire the beauty of a bowl’s exterior, but also appreciate its weight, texture, and the sensation as it touches the lips. We cannot grasp Rikyū’s aesthetics by sight alone. Marcel Proust’s Remembrance of Things Past describes moments such as sipping tea or stumbling over paving stones—physical sensations that trigger long-forgotten memories. To fully savor a Raku bowl, we should recall the significance Proust gave to the feeling of a napkin against his lips. 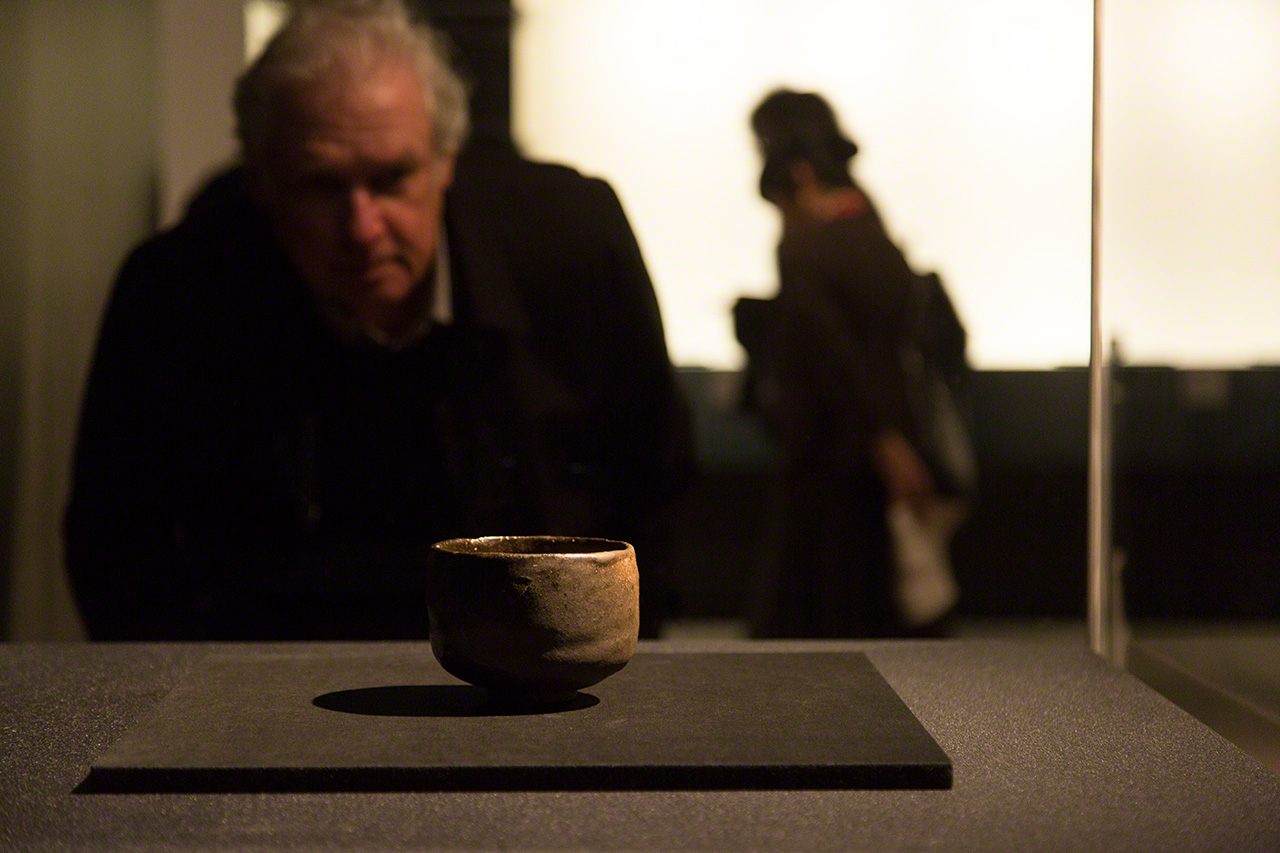 A black Raku tea bowl by Chōjirō exhibited by the National Museum of Modern Art, Kyoto, as part of its 2017 exhibition “The Cosmos in a Tea Bowl: Transmitting a Secret Art across Generations of the Raku Family.” (© Kawamoto Seiya)

Tea Unites Us Through Beauty

There are no historical documents that confirm Rikyū’s death was by seppuku, on April 21, 1591. But Edo-period veneration of seppuku led to its acceptance as gospel. The Book of Tea, penned in English by Okakura Kakuzō (or Tenshin, 1863–1913) in 1906, gives a dramatic account of the ritual suicide. This version evokes Christ’s Last Supper and the death of Socrates. Rikyū’s death showed that the tea ceremony is worth risking one’s life for, a thing with beauty is its ultimate goal. Okakura believed the significance of tea was its power to unite us in the tea room through beauty. Ten years later, when Okakura’s friend, the Indian poet and philosopher Rabindranath Tagore (1861–1941), visited Japan, he said that Japanese traditional culture “has evolved a sense of sight which clearly sees truth in beauty and beauty in truth.”

The Japanese fusion of awareness of nature and beauty is expressed in traditional poetry. The dynamic global spread in the popularity of haiku is testimony to the growing number of people who appreciate this, despite the challenging obstacle of the Japanese language. Rikyū strived to express the fusion of an aesthetic sense​ with appreciation of nature, in forms such as tea rooms and Raku tea bowls. He was an aesthetic revolutionary who continues to this day to transcend his era.

(Originally written in Japanese. Banner photo: A statue of Sen no Rikyū. Courtesy of the Sakai City Museum.)