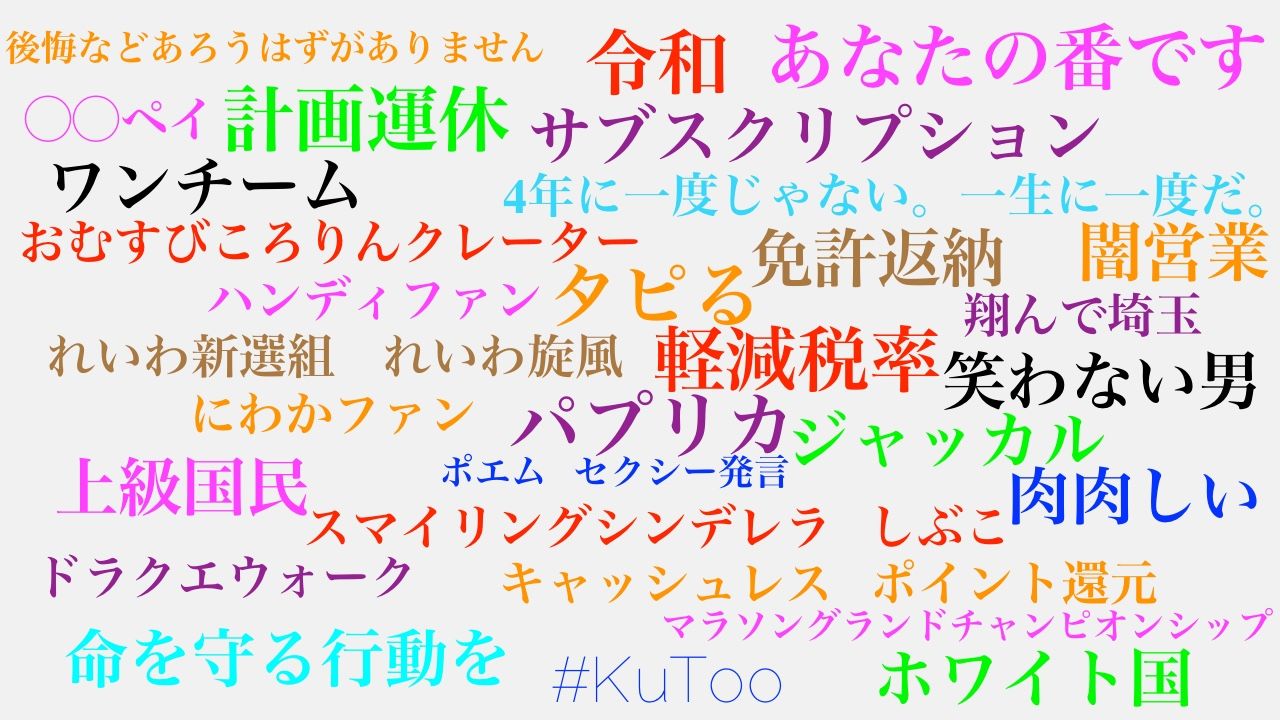 Culture Language Nov 6, 2019
On November 6, the publisher Jiyū Kokumin Shinsha once again announced its list of nominees for the words and phrases that best encapsulate the year Japan entered the Reiwa era. We present the complete list with explanations of the words that sum up the year that was.

Japan lived through an eventful 2019. It saw an end to the Heisei era that began in 1989, ringing in the Reiwa era and the reign of Emperor Naruhito. It hosted the Rugby World Cup, providing a well-organized stage for the top teams in the world and climbing up their ranks itself. And it suffered a series of natural disasters that let it know climate change was definitely here and making itself felt.

All these events gave the Japanese people plenty to talk about—and plenty of new words with which to do so. The publisher Jiyū Kokumin Sha, whose annual language guide Gendai yōgo no kiso chishiki (Basic Knowledge on Contemporary Terminology), has once again assembled a list of 30 words and phrases that were on everybody’s lips in 2019. The 10 finalists and the Word (or Words) of the Year will be announced at a ceremony on December 2. Read on to familiarize yourself with the candidates!

Nominees for the Words of 2019

あな番（あなたの番です） — Anaban (Anata no ban desu). The show Your Turn to Kill aired on Nippon TV as the first serial drama to span an entire half-year (two quarterly seasons) on its initial outing in a quarter of a century. Cowritten by show-business giant Akimoto Yasushi, the show features a newlywed couple sucked into a series of murders in their apartment building; its unpredictable plot twists sparked a boom among fans discussing the program online, predicting its next moves.

命を守る行動を — Inochi o mamoru kōdō o. “Take immediate action to save your lives!” was the urgent warning issued when typhoons Faxai (which made landfall near Tokyo on September 9) and Hagibis (October 12) brought devastating wind and torrential rain, threatening communities in Tokyo and surrounding regions with flooding and landslides. This warning corresponds to the “emergency warning” level of alert introduced by the Japan Meteorological Agency in 2013, and comes after earlier warnings urging people to evacuate to safe locations; at this point, they are expected to climb to higher stories in their own buildings and ride out the storm in place.

おむすびころりんクレーター — Omusubi kororin kurētā. The “tumbling rice-ball crater” was created in April by the Hayabusa 2 probe, which successfully launched an impactor into the surface of the near-earth asteroid 162173 Ryūgū. Project team members gave the crater this name based on a beloved Japanese children’s tale; its creation exposed pristine asteroid material below the surface that the probe was able to collect for analysis.

キャッシュレス/ポイント還元 — Kyasshuresu/pointo kangen. A government program to promote use of “cashless” payment methods and retailers’ campaigns to “return spent money in the form of points” for future shopping use ramped up in the wake of the October hike of the consumption tax rate to 10%. Users of credit cards, mobile phone payment schemes, and contactless transit cards reaped the benefits in the form of a reduction of several percent in their final purchase prices when avoiding bills and coins.

#KuToo. A play on the #MeToo hashtag to raise awareness of sexual harassment and abuse, this term tweaked the Japanese words kutsu (shoes) and kutsū (pain or discomfort) to point at the sexism inherent in expectations and, in many cases, rules demanding that women should wear uncomfortable high heels or pumps in the workplace. The writer and former pinup model Ishikawa Yumi is said to have coined the hashtag.

計画運休 — Keikaku unkyū. These “planned service outages” were announced ahead of time by railway operators concerned about the impact of Typhoons Faxai and Hagibis. Crowding and chaos ensued as commuters and other travelers made their way to stations the next mornings to find that the trains would remain out of service for hours—in some cases days—after the announced times of resumption.

軽減税率 — Keigen zeiritsu. The October 1 hike of the consumption tax rate from 8% to 10% included a “reduced tax rate,” the original 8%, applied to food purchases, newspaper subscriptions, and a bewilderingly complex list of other items. Consumers entered an age of confusion thanks to rules stating, for instance, that the higher rate applied to meals consumed on the premises, but not those taken out.

後悔などあろうはずがありません — Kōkai nado arō hazu ga arimasen. “Of course I have no regrets about my career,” came the stately reply from baseball legend Suzuki Ichirō to a reporter’s question posed after he announced his retirement from the sport following the second of two season-opening games between his Seattle Mariners and the Oakland Athletics played in Tokyo.

サブスク（サブスクリプション） — Sabusuku (sabusukuripushon). “Subscription” services were all the rage in the digital realm, at least among service and software providers who hoped to use them to secure stable revenue streams from a user base increasingly uninterested in purchasing pricy applications for their computers or devices. The term also crept into the physical world, with companies offering subscription services for everything from jewelry to all-you-can-drink plans at restaurant chains.

ジャッカル — Jakkaru. A “jackal” steal is a rugby play where you tackle an opponent carrying the ball and strip it away from him as you knock him down, preventing the other team from forming a ruck and keeping possession. Japan’s Himeno Kazuki specialized in these steals, putting them on display in the Brave Blossoms’ victories against both Scotland and Ireland in the pool stage of the Rugby World Cup.

上級国民 — Jōkyū kokumin. The issue of Japan’s growing hordes of elderly drivers became front-page news after an 87-year-old driver lost control of his vehicle and struck and killed a mother and young daughter on a busy road in Tokyo’s Ikebukuro district. However, Japanese netizens cried foul when it became apparent that police would not indict the culprit, a former high-ranking bureaucrat, claiming authorities and media outlets gave preferential treatment to the aged man because he was an “upper-class citizen.”

スマイリングシンデレラ/しぶこ — Sumairingu Shinderera/Shibuko. Golfer Shibuno Hinako shot to golf stardom when she captured the Women’s British Open in her first appearance, becoming only the second Japanese player to win a major title. Smitten by the young talent, Japanese fans dubbed her the “smiling Cinderella” for the warm grin she wears during interviews and on the links, and took to affectionately calling her Shibuko, a truncated version of her first and last name.

タピる — Tapiru. Bubble tea mania continues unabated as outlets hawking the tapioca-based drink pop up all around Japan. The trend has reached such a fever pitch that aficionados even coined a new verb, tapiru, to describe going out for a tapioca beverage. 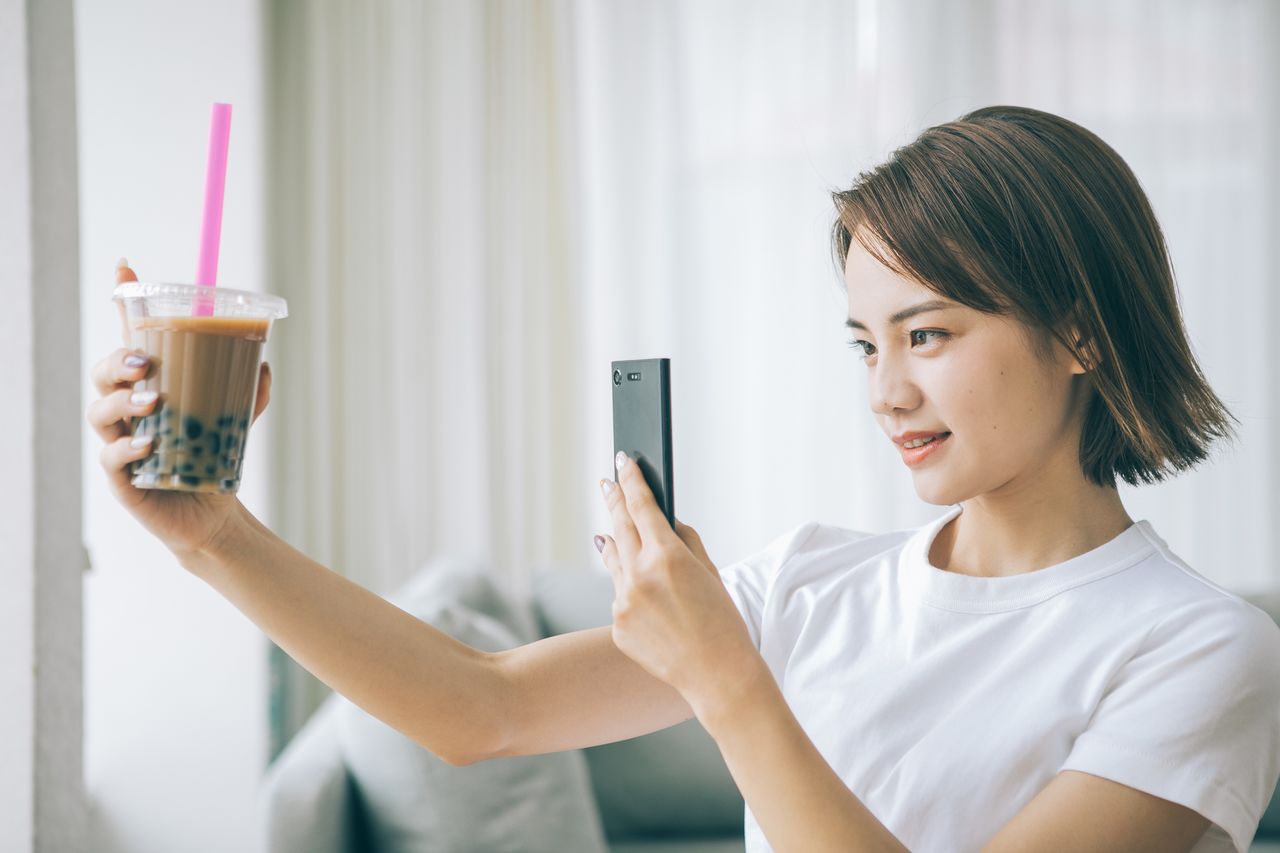 ドラクエウォーク — Dorakue uōku. Fans of the popular Dragon Quest franchise were ecstatic when Square Enix, the company behind the games, in September launched Dragon Quest Walk, an augmented reality version for smartphones.

翔んで埼玉 — Tonde Saitama. The live-action movie based on a popular manga struck a chord with the denizens of Saitama, who packed theaters to enjoy the film’s self-deprecating humor and over-the-top portrayal of the prefecture and its eccentric residents.

肉肉しい — Nikunikushii. Meat-lovers were salivating over new trends in dining like specialty cuts, aged beef, and dedicated restaurants, and this “meaty” adjective was on the lips of epicures partaking in carnivorous delights.

にわかファン — Niwaka fan. The Brave Blossoms historic run at the 2019 Rugby World Cup brought a sharp uptick in “fair-weather” fans who prior to the tournament had little interest in the sport.

パプリカ — Papurika. Japanese children and adults alike were grooving to the tune “Paprika.” Produced by musician and songwriter Yonezu Kenshi and performed by children group Foorin. The song is part of national broadcaster NHK’s efforts to build momentum for Tokyo 2020.

ハンディファン — Handifan. These hand-held electric fans were all the rage as Japan sweated through another sweltering summer in 2019. Unlike traditional human-powered sensu and uchiwa fans, users of these devices can enjoy all the cooling pleasure with none of the work.

ポエム/セクシー発言 — Poemu/sekushī hatsugen. Newly appointed Environment Minister Koizumi Shinjirō invited criticism when he dodged questions about the government's plan to dispose of radioactive soil and other waste from the damaged Fukushima Daiichi Nuclear Power Station by reciting a nonsensical poem. He later drew puzzled responses following a press conference in New York before the start of a UN climate summit where he said that environmental issues need to be “cool” and “sexy,” words not typically associated with climate change.

ホワイト国 — Howaitokoku. On August 28, the Japanese government removed South Korea from its white list of trading partners that enjoy simplified export controls. Fueled by a dispute over compensation for forced labor before and during World War II, diplomatic friction escalated to the point that Japan revoked its neighbor’s status as a “white country.”

○○ペイ — –pei. Cashless payment systems based around scanning QR codes from smartphone apps proliferated in 2019, and many ended in the suffix “–Pay,” including PayPay, FamiPay, and the ill-fated 7Pay.

MGC（マラソングランドチャンピオンシップ） — Marason Gurando Chanpionshippu. The Japan Association of Athletics Federations introduced the “Marathon Grand Championship” as a way of selecting its marathon representatives for Tokyo 2020. Runners who achieved the qualifying times took part in a race on September 15, with the top two male and female finishers qualifying for next summer’s big event. Other hopefuls will have a chance to compete for the remaining places—one each for men and women—in the MGC Final Challenge series that runs through the spring of 2020.

免許返納 — Menkyo hennō. It is still hard to get by without a car outside the big cities, but concerns about elderly drivers are rising after high-profile accidents, sustaining the movement to encourage voluntary “return of driving licenses.”

闇営業 — Yami eigyō. “Shady business” in the entertainment world hit the headlines as a number of comedians at the Yoshimoto Kōgyō agency were found to have supplemented their earnings by performing for criminal groups.

4年に一度じゃない。一生に一度だ。 — Yonen ni ichido ja nai. Isshō ni ichido da. The Rugby World Cup slogan called on fans to take the rare chance of seeing the tournament in Japan. The Japanese version, meaning “It’s not once every four years, it’s once in a lifetime,” was shortened to “Once in a lifetime” in the official English version.

令和 — Reiwa. The new era name, announced one month before Emperor Naruhito ascended the throne on May 1, was the first to be taken from a Japanese classic rather than Chinese literature. The characters come from the preface to a series of poems in the eighth-century Man’yōshū anthology. Reiwa’s official English translation is “beautiful harmony.”

れいわ新鮮組／れいわ旋風 — Reiwa Shinsengumi/Reiwa senpū. Yamamoto Tarō’s new party Reiwa Shinsengumi won much publicity and two seats in the July House of Councillors election. Its lawmakers Funago Yasuhiko and Kimura Eiko are raising the profile of disability, as they themselves are severely disabled. Effective fundraising and deft use of social media saw the popular movement described as a “Reiwa whirlwind.”

笑わない男 — Warawanai otoko. Japanese prop Inagaki Keita became known as “the man who doesn’t smile,” remaining straight-faced after scoring a try in the crucial last Pool A game against Scotland, and even in a team photo after its 28–21 victory had secured a quarterfinal place. 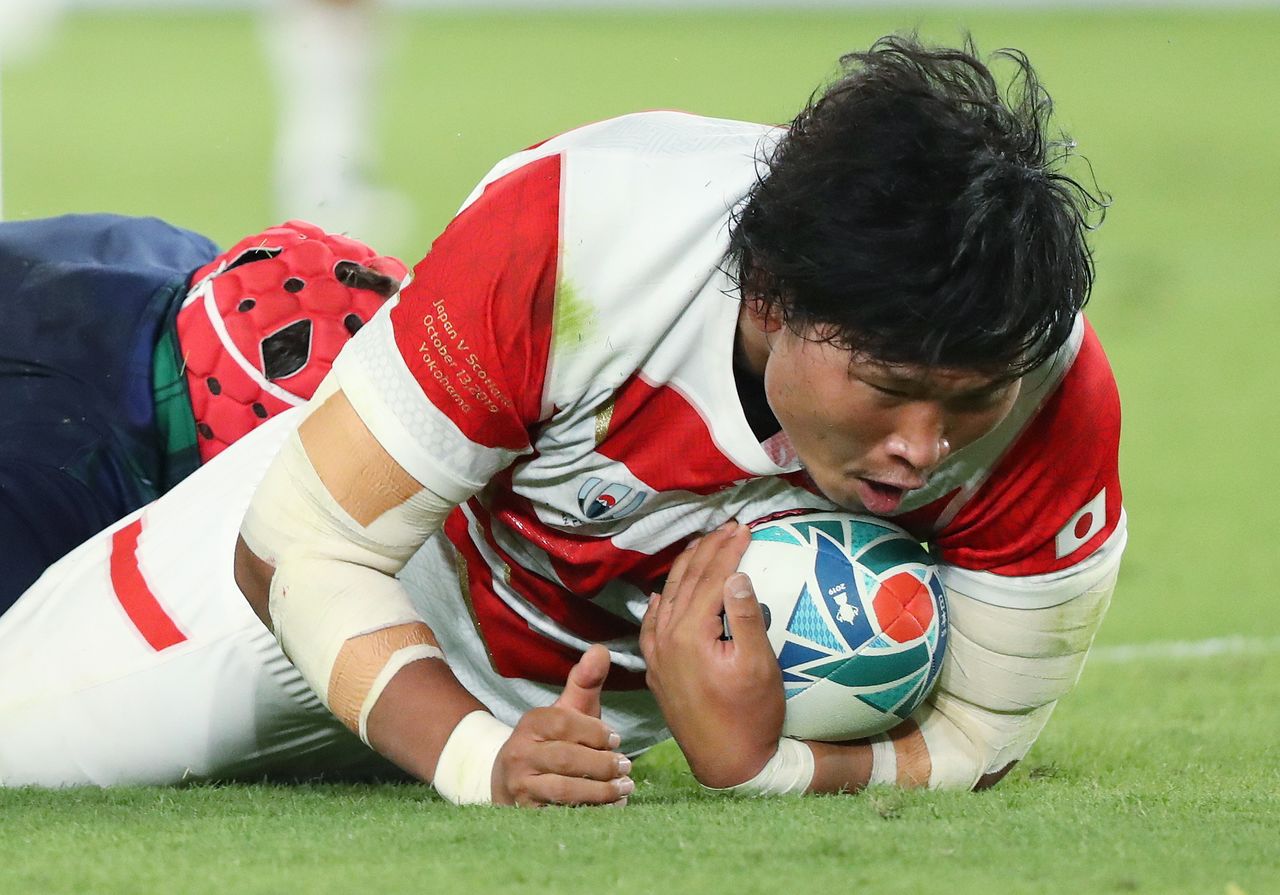 Inagaki Keita scores his first try ever as a Brave Blossom in the October 13 pool-round match against Scotland. (© Jiji)

One Team — Japan rugby coach Jamie Joseph set his sights on building strong unity among his players through this motto.