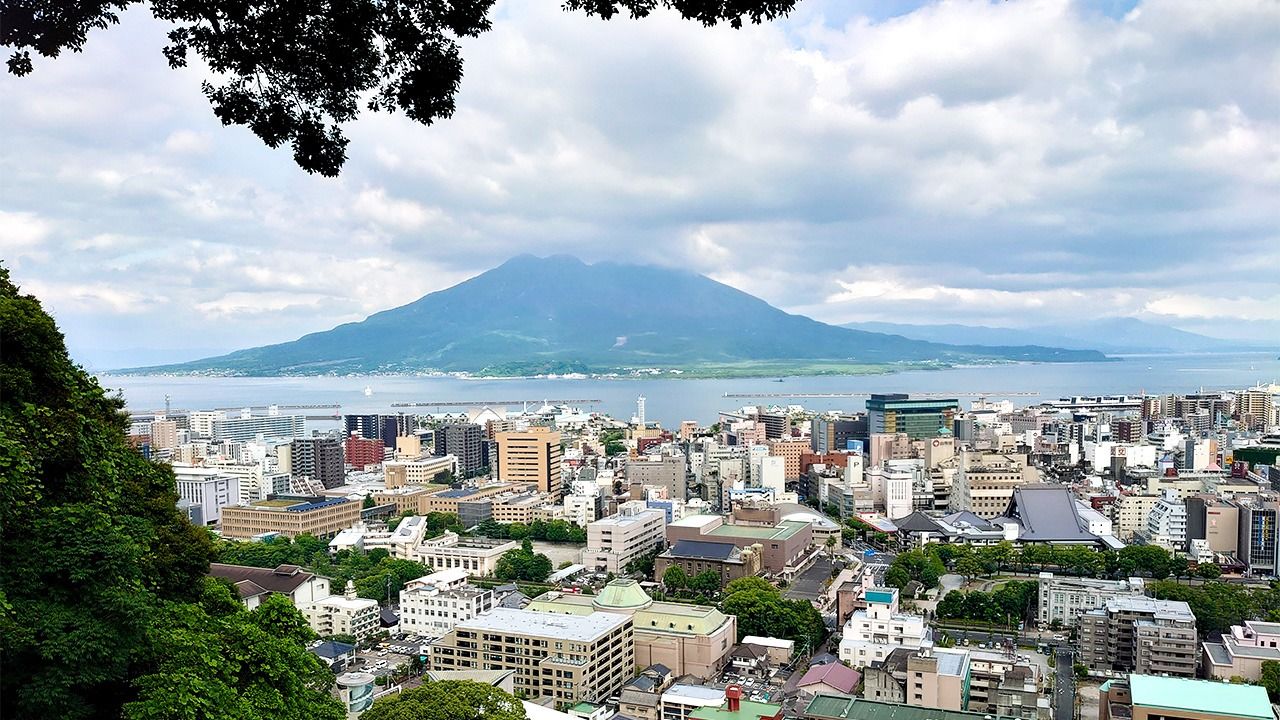 Wandering Through History in Kagoshima

Travel History Oct 7, 2022
Kagoshima, once known as Satsuma, was home to major Meiji Restoration figures like Saigō Takamori and Ōkubo Toshimichi. The city is proud of its identity as a seat of this past. An exploration of the history on display in Kagoshima and the emotions it inspires.

Old Satsuma and Echoes of the End of the Shogunate

Looking toward the sea from the banks of the Kōtsuki River, I can see smoke from Sakurajima’s volcanic crater mingling with dark clouds to veil the sky. 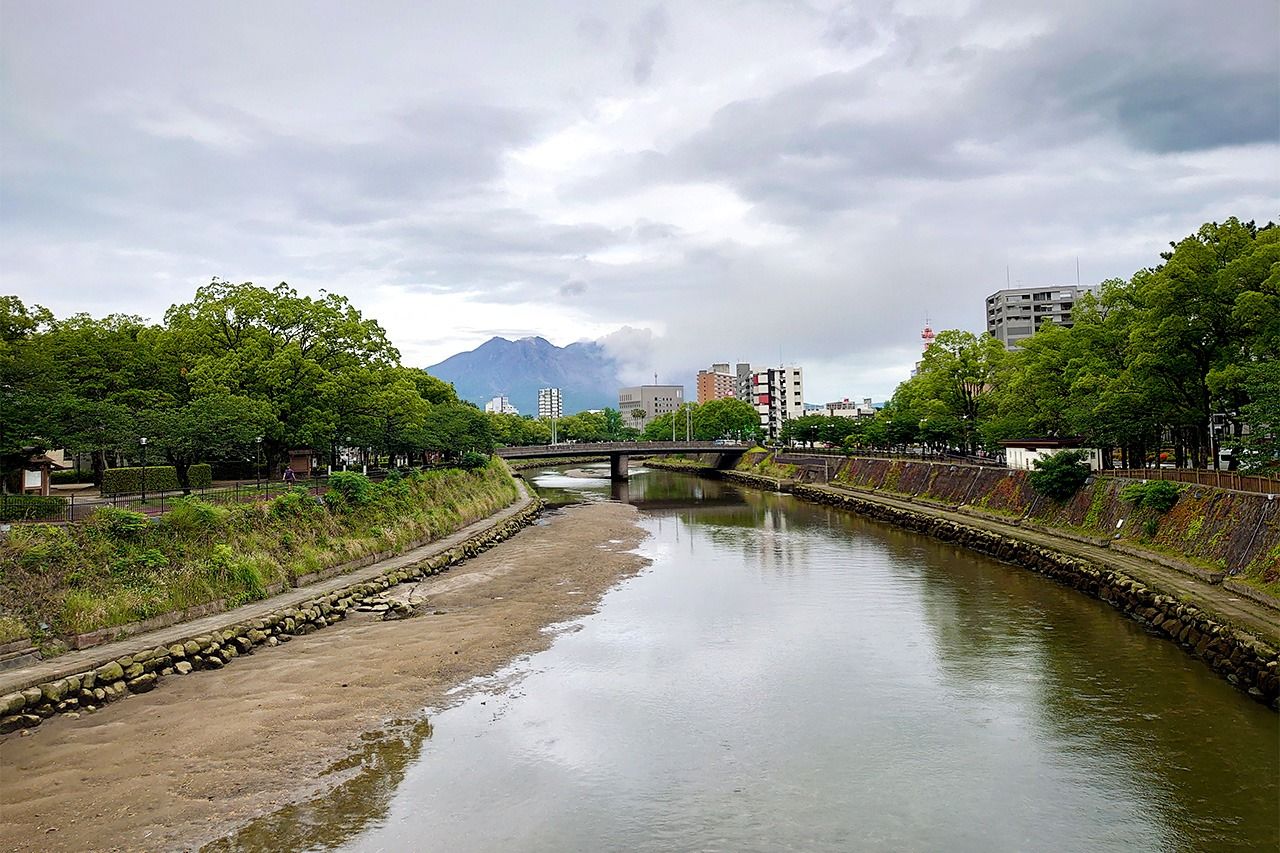 Kagoshima was once home to the Satsuma clan, which was instrumental in the Meiji Restoration of 1868, and any walk through the streets of the prefecture’s capital city today will take a wanderer past numerous spots connected to the imperial patriots who drove that revolution. There are statues, of course, as well as birthplaces, deathplaces, memorial stones, and monuments everywhere. The plaza in front of Kagoshima Chūō Station has a monument covered in statues known collectively as the Wakaki Satsuma no gunzō, or Great Young Men of Satsuma. A walking path called the History Road runs alongside the city’s main river, the Kōtsuki, with 47 stone pillars bearing the stanzas of the poem “Iroha uta”—a manual for proper living with one line beginning with each character of the Japanese syllabary—by the old Satsuma lord Shimazu Tadayoshi (1492–1568), as well as plaques explaining the history and land of old Satsuma. The Kagoshima Museum of the Meiji Restoration stands along one stretch of the History Road and has exhibits all about Satsuma and its momentous role in Japanese history.

Saigō Takamori’s birthplace (left) and the spot where he is believed to have committed ritual suicide. (© Li Kotomi)

Kagoshima, which was formerly the Satsuma domain, stands at the southernmost point of Japan’s main islands. It was highly influential in the Meiji Restoration because of its early access to foreign cultures, ideals, knowledge, and technology brought by sea trade. Indeed, many truly historic events marked its connection to other cultures, like the 1549 arrival of the Catholic missionary St. Francis Xavier, the 1543 introduction of firearms at the island Tanegashima, and the conquering of the Ryūkyū kingdom (now Okinawa). Many Satsuma lords also expressed early interest in Western education.

Japan was forced to open up to the world after US Commodore Matthew Perry’s Black Ships arrived in 1853, and the Treaty of Amity between Japan and the United States in 1854 rocked Japanese society even more. The 1858 Treaty of Amity and Commerce, which put Japan at a great disadvantage to the United States, incited much criticism at home and helped spur the anti-Western sonnō jōi (revere the emperor and expel the barbarians) movement. The shogunate’s chief minister Ii Naosuke (b. 1815) tried to suppress the movement with the 1858–60 Ansei purge, but he was eventually assassinated in the Sakuradamon incident of 1860. That event marked the beginning of a time of conflict and alliance, intrigue and assassination, and blood begetting blood.

Leaders of the Satsuma domain started out calling for foreigners to be driven from Japan, but then came the 1862 Namamugi incident, when a Satsuma samurai killed a British subject, leading to the British bombardment of Kagoshima in 1863. This proved to the Satsuma leadership just how strong Western militaries were, so it gave up on its expulsion plans and focused solely on defeating the shogunate. As if to prove the saying “what doesn’t kill you makes you stronger,” Satsuma and Britain became fast friends.

The clan got aid from Britain as it defied the shogun’s demands for isolation and sent young people abroad as students. These included Mori Arinori (1847–89), who later became Japan’s first minister of education, and Hatakeyama Yoshinari (1842–76), who was the first head of Tokyo Kaisei Gakkō school, a forerunner to the University of Tokyo. After the 1866 Sat-Chō Alliance between Satsuma and Chōshū—current-day Yamaguchi Prefecture—the latter was able to defeat the shogunate’s aggressive Second Chōshū Expedition due in large part to British assistance. That defeat undermined the prestige of the government, hastening its end.

Friends Swept Up in History

When speaking of Satsuma-born figures in the Meiji Restoration, of course the most famous have to be Saigō Takamori (1828–77) and Ōkubo Toshimichi (1830–78). Both men lived in the town of Kajiya as children and became fast, lifelong friends during their time under the Satsuma domain’s gojū kyōiku youth education system. Clan leaders sentenced Saigō to island exile numerous times, but each time Ōkubo would beg them for lenience. The two worked together to establish a new government at the end of the Edo period (1603–1867), and after the emperor’s restoration as the head of state in 1867, they continued to play important roles in the new Meiji government. 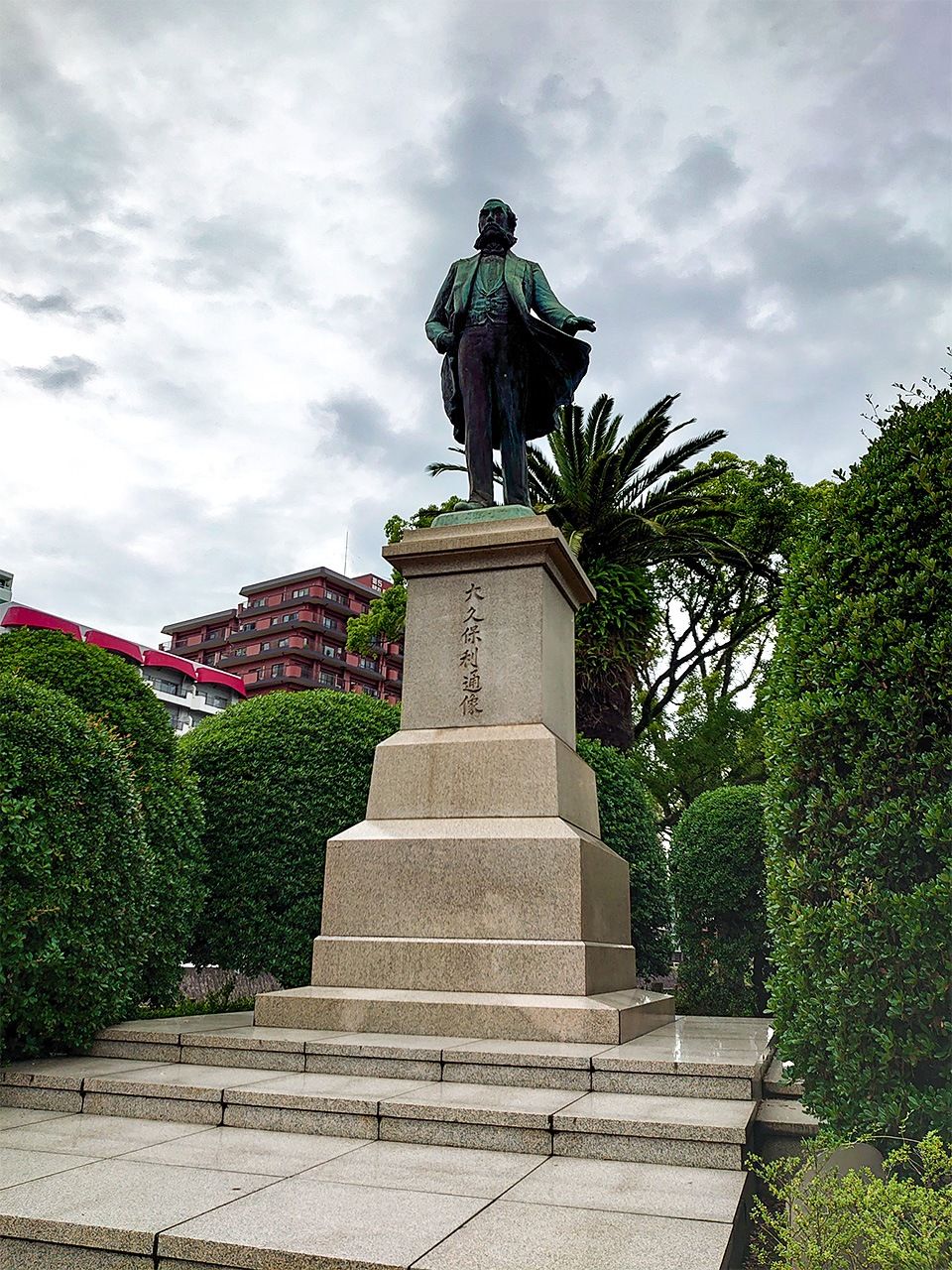 However, Ōkubo participated in the Iwakura Mission to Europe in 1871, while Saigō remained behind in Japan. This eventually led to cracks in their friendship. They first showed in 1873, when the two men took opposite sides over a proposed invasion of the Korean peninsula. Ōkubo had seen modern Western civilization with his own eyes and so insisted that the government should prioritize domestic affairs to catch up, while Saigō insisted on the invasion.

Eventually, Saigō left the government in 1874 to return to Kagoshima, where he founded a school in his old hometown. Three years later, Saigō led an open uprising of samurai who resented the new government in the Satsuma Rebellion. That ended in failure eight months later, and Saigō committed ritual suicide in 1877. Ōkubo was assassinated in Tokyo the very next year. The two lifelong friends were swept up by the currents of history and forced into a life-and-death struggle, which is such a perfectly dramatic story that it has inspired countless historical novels and television series.

The Restoration Must Be Praised

However, wandering through the city of Kagoshima and visiting all these historical remnants, I found myself feeling more lonely than moved or excited. I felt that the story they tell of the Meiji Restoration there was not a particularly pleasant one. 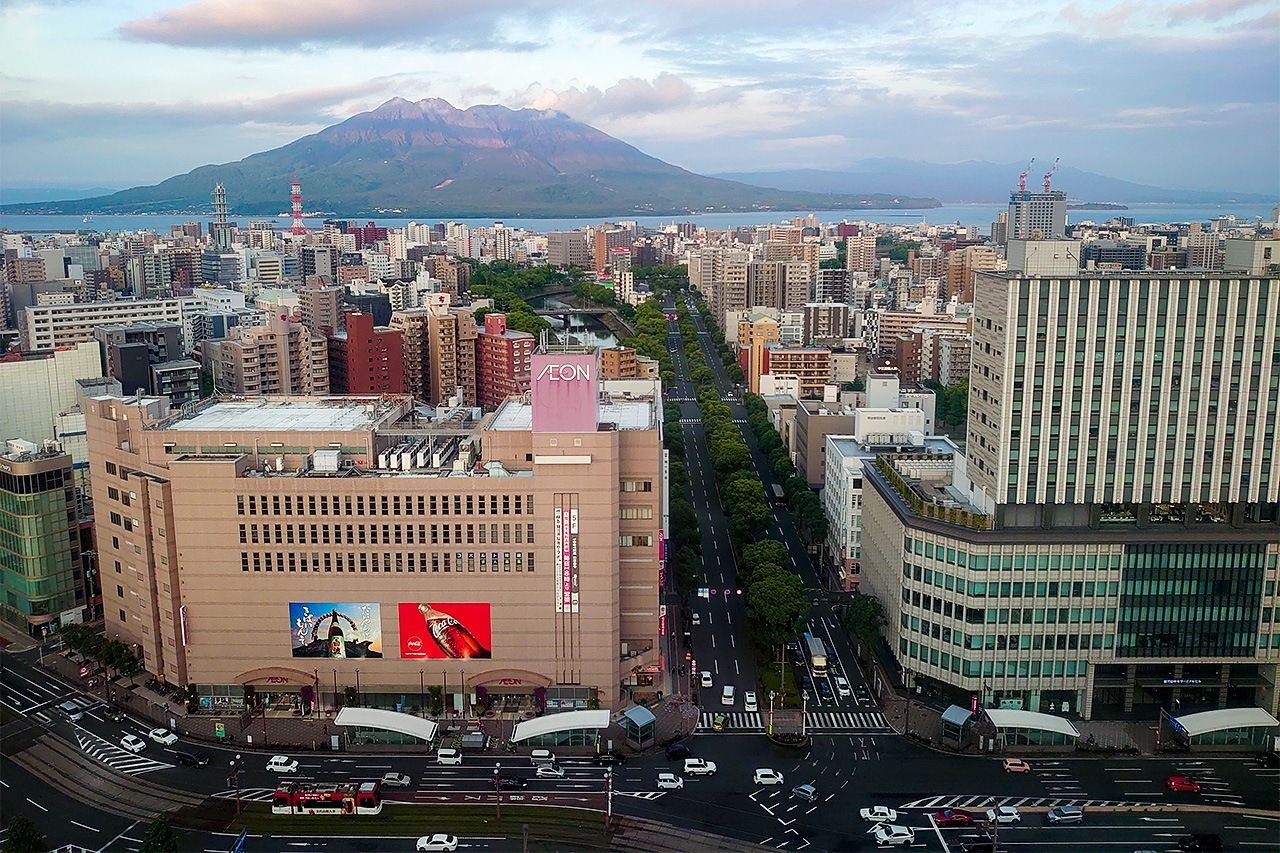 Kagoshima and Sakurajima seen from atop a Ferris wheel. (© Li Kotomi)

For example, it puts forward the idea that its gojū kyōiku education system was one of the reasons that Satsuma could produce so many great figures at the end of the Edo period, such as Saigō and Ōkubo, as well as the politician Murata Shinpachi (1836–77), Marshal-Admiral Tōgō Heihachirō (1848–1934), and Admiral Yamamoto Gonnohyōe (1852–1933). This was a unique youth education style developed in the Satsuma domain in which there were no teachers; older people living in the area instructed younger students. Young people were divided into rough groups by age. Ages 6 to 15 were chigo, 15 to 25 were nise, and those 25 and older were ose. Each group had a different role.

It was based on a strict hierarchy, with rules like “No speaking out of turn” and “Obey your elders.” The word of senior members was absolute, and defiance was not allowed. In modern terms, it seems something like a sports-team mindset. There were almost certainly the same kinds of problems with hazing, power harassment, and intensive focus on building willpower and mental toughness that we see today in athletic organizations. And then, of course, there’s the fact that males were the only ones with access to this education. Yet, in reading about this past here in Kagoshima, there is no apparent critical consideration at the issues. The gojū kyōiku is consistently presented in a purely positive light, as one of the driving forces behind Japan’s modernization.

Some places also discuss the development of Ezo—present day Hokkaidō—with a singular emphasis on the hard work of the settlers, and no mention of its impact on the Ainu people already living there.

I suppose that’s to be expected, though. Kagoshima is proud of its role in the Meiji Restoration, considers it part of the local identity, and enjoys lots of tourism because of it. It seems only natural to focus on the positives.

Still, though, that pride awoke other kinds of sadness within me.

Then, I see that the Satsuma clan may well have been a force for progress as some of the first of Japan’s people to accept foreign culture, defy the rule of the shōgun, and help lead Japan into the modern age. Now, though, if election results are any indication, this land of Kagoshima—which once defined an age and helped usher in modern Japan—is a kingdom of conservatism that resists change and shuns progressive values. It seems that individuals and groups who usher in a new era by adopting progressive values are fated by history to fall into conservatism as they fail to keep up with changing times.

Finally, and this is purely personal, but I found myself forced to face the fact that I am a person without a hometown. I have never felt that kind of pride in something done by someone great who was born in the same place as I was, the same as if I had done it myself, the way the people of Kagoshima feel about the great figures of the Meiji Restoration. People around the world seem to share a sense of belonging to a group through stories, such as creation myths or tales of great founding figures, and from there they develop a love of their hometown, or school spirit, company pride, and eventually patriotism, which can help instill a sense of identity. I always feel as if I am standing outside of such circles.

A Vagabond in the Stream of Time

Yet it might be exactly that loneliness and sense of alienation that made me a writer. Perhaps I chose to confront the world as an individual precisely because I did not feel I belonged anywhere.

A few minutes’ walk from a statue of Saigō Takamori in his military uniform stands the Kagoshima Modern Literature Museum, which has exhibits on literary figures connected to the city. Among them are two women authors, Hayashi Fumiko (1903–51) and Mukōda Kuniko (1929–81). Neither was born in Kagoshima, but both lived here as children. Hayashi died suddenly of a heart attack at the age of 47, and Mukōda died unexpectedly in a plane crash. 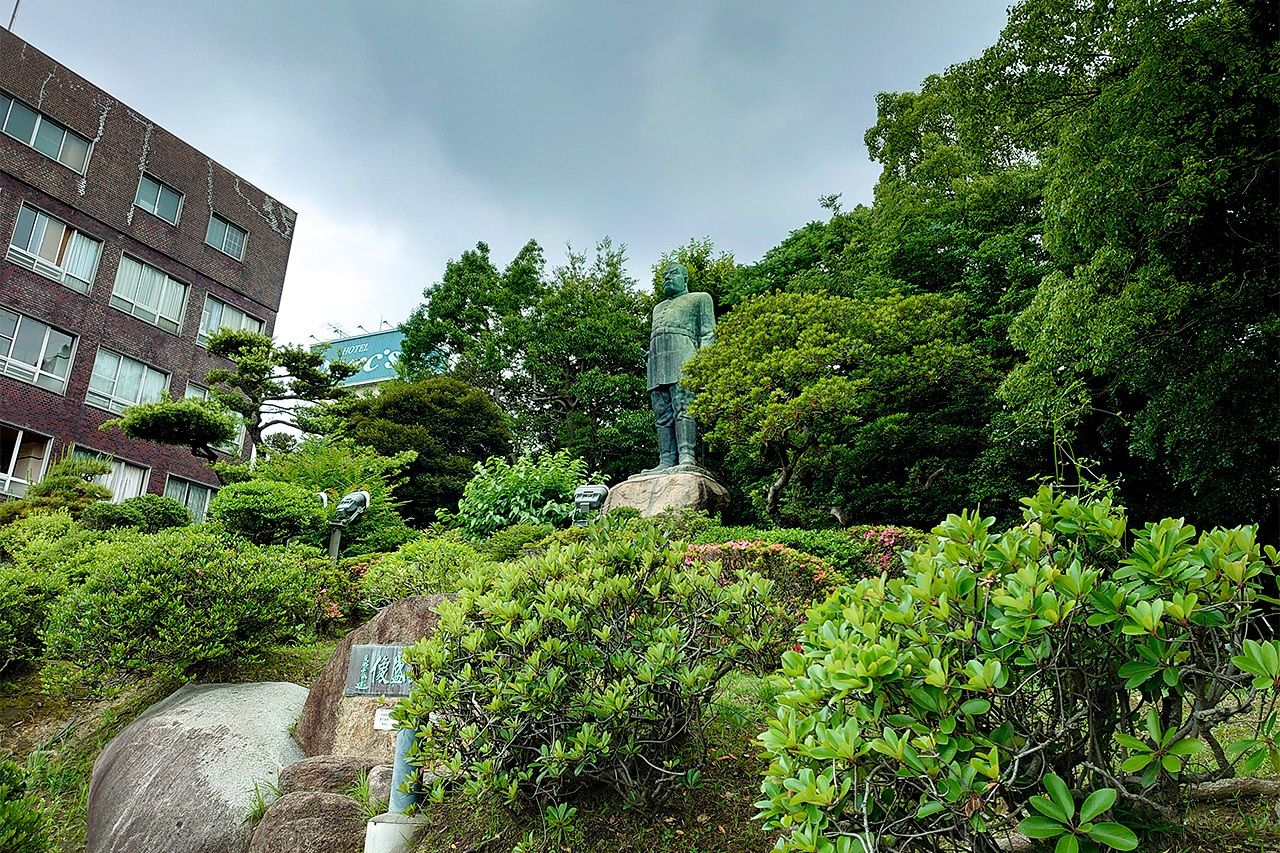 I feel much more affinity with these two women writers than all those men who achieved great feats in the Restoration, and have earned names as heroes of history.

One of Hayashi’s greatest works, Hōrōki (translated by Joan E. Ericson as Diary of a Vagabond), includes the line: “I was fated to be a vagabond. I have no hometown.”

I myself feel much the same. I am also a person who does not, or rather cannot, have a hometown. Unlike Saigō and Ōkubo, I have never had a true lifelong friend. The relationships I have depended on have always been fleeting, fragile things.

After I left the museum, I climbed nearby Mount Shiroyama. The mountainside is home to a cave where Saigō hid himself away for five days during the terrible crisis of the Satsuma Rebellion, but climbing further brought me to an observation deck offering a wonderful view of the city. Dark clouds veiled the sky, and there loomed the volcano Sakurajima. The natural scenery has not changed much in the last 150 years, despite the tremendous human activity over that time.

Perhaps in the end, all of us humans are lonely vagabonds wandering along in the flow of time. Still, between the sprawling heavens and the earth, people can find just one small place to go and find refuge so that they can survive, even if it is not their hometown. And if that place, that refuge, allows us to live on, then who can object to calling it your hometown?

That, at least, is what I want to believe. 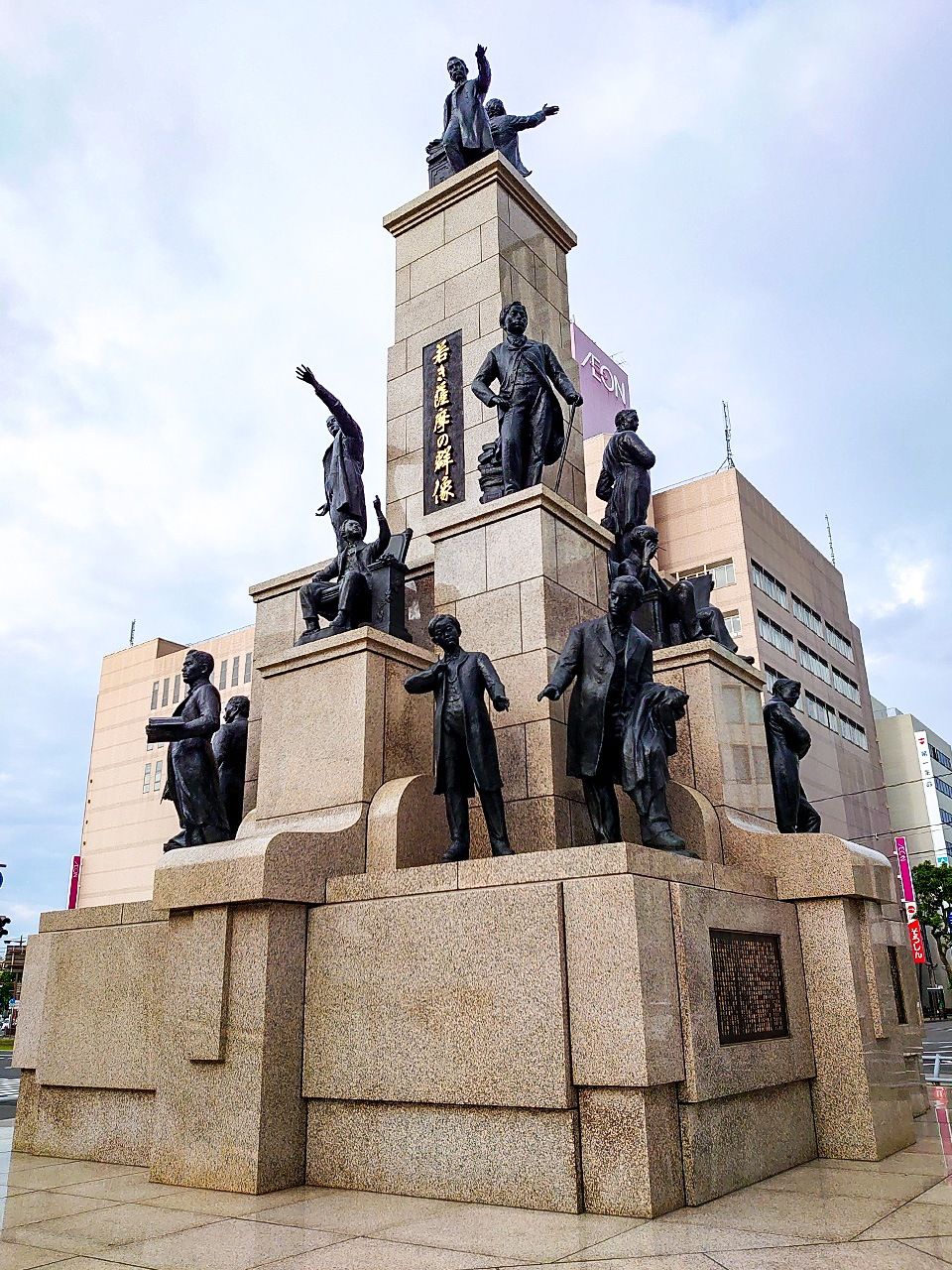 Wakaki satsuma no gunzō statues commemorating the Satsuma youth who studied in Britain.