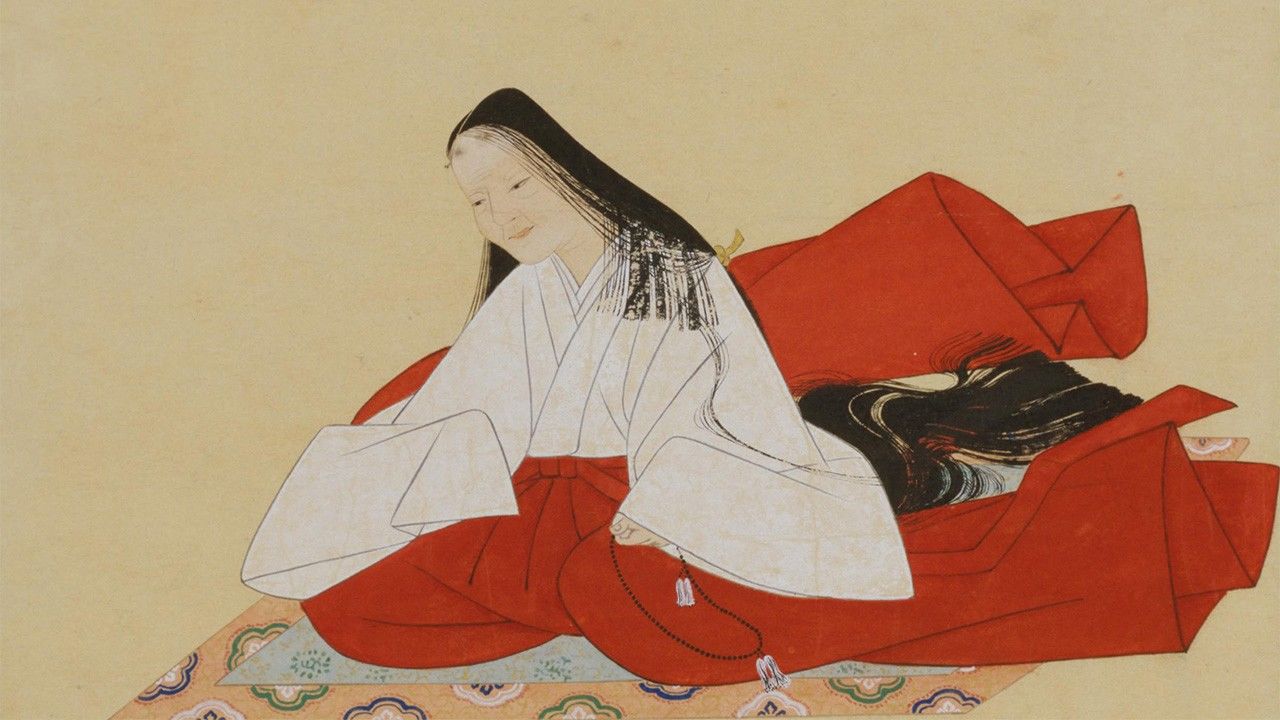 History Politics Culture Jul 22, 2022
Kasuga no Tsubone was instrumental in establishing the Ōoku system, whereby concubines for shōguns during the Edo period (1603–1868) ensured there would be stable succession. She rose from being the wet nurse to the third shōgun Iemitsu to become one of the most powerful women in the realm.

The Ōoku or “inner chambers” was the name for the living quarters at Edo Castle for women serving each reigning shōgun during the Edo period (1603–1868). The name Ōoku itself was only introduced around the time of the fourth shōgun, Tokugawa Ietsuna (r. 1651–80), although the place itself was established in the reign of the second shōgun, Hidetada (r. 1605–23), and its organization formalized during the reign of the third shōgun, Iemitsu (r. 1623–51).

After Ieyasu stepped down as shōgun in 1605, succeeded by his son Hidetada, there were major renovations at Edo Castle from the following year. The castle was divided between the Omote, where the shōgun attended to affairs of state, and the Oku or Okugata, where his family lived. This latter was the prototype for the Ōoku, and at the time it was established, Hidetada’s wife Ogō oversaw it.

Hidetada married Ogō in 1595 after his first wife died, and among their children were the future shōgun Iemitsu and his younger brother and rival, who would go on to take the name Tokugawa Tadanaga. Although Hidetada had no official concubines, he also had a secret illegitimate son, who would grow to be Hoshina Masayuki, start a dynasty of daimyō in the Aizu domain (now Fukushima Prefecture), and act as an adviser to Iemitsu.

At that time the system of the Ōoku housing the shōgun’s concubines was not yet in place. But this would change with the influence of the young Iemitsu’s wet nurse, Ofuku, who would come to be remembered to history as Kasuga no Tsubone.

There are various theories about Ofuku’s life before she came to Edo. What is certain is that she was the daughter of Saitō Toshimitsu, a retainer of Akechi Mitsuhide, who notoriously betrayed Oda Nobunaga. When Mitsuhide was killed at the 1582 Battle of Yamazaki by Toyotomi Hideyoshi, Toshimitsu was also executed. As the daughter of a traitor, Ofuku led a vagabond life, facing numerous tribulations.

In 1604, she was picked as the wet nurse for Iemitsu (then known by his childhood name of Takechiyo). Again, there are different theories as to how this happened, such as that she was favored by Ieyasu during an application process, that she had been recommended by the shogunate, or that she was Ieyasu’s lover.

Whichever is true, as a cultured woman with experience of living in Kyoto, she was suitable for the job. She also had a rare strength of will and tenacity, and one can imagine Ieyasu discerning these qualities in her.

In the Edo period, Ofuku was popularly thought to have put in a word with Ieyasu for Takechiyo (Iemitsu) to be the next shōgun, based on primogeniture, as he was older than his brother Kunimatsu (Tadanaga), another popular candidate within the shogunate. This story is now believed to be a later fabrication. Some records also state that Ofuku’s support of Takechiyo led her to clash with Hidetada and Ogō, who favored his younger brother, but this is lacking in credibility, and is rejected by many researchers.

Nonetheless, such stories indicate the perceived importance of Ofuku within the shogunal household.

The Political Need for a Successor

Ofuku’s importance came not from her acting as wet nurse to one future shōgun—Iemitsu—but through the superlative political instincts that helped her establish the Ōoku system. In 1618, rules introduced for the Oku brought it closer to the form of the Ōoku that became well known. These included a curfew, a ban on male interlopers, and the requirement for women who entered to carry permits.

As Takechiyo took on the name Iemitsu and became shōgun in 1623, it seems that Ofuku may have been preparing for this moment. While the rules were introduced in the name of the shōgun Hidetada, there is a real possibility that Ofuku’s strong will influenced the move.

After becoming shōgun, Iemitsu was not initially blessed with children. His wife Takako was the daughter of the kanpaku (regent) Takatsukasa Nobufusa, but they soon quarreled and spent little time together. Iemitsu was also apparently more interested in homosexual encounters with pages than in seeking out other women. While this was not unusual at the time, Ofuku saw that the current circumstances would not lead to the birth of a successor. 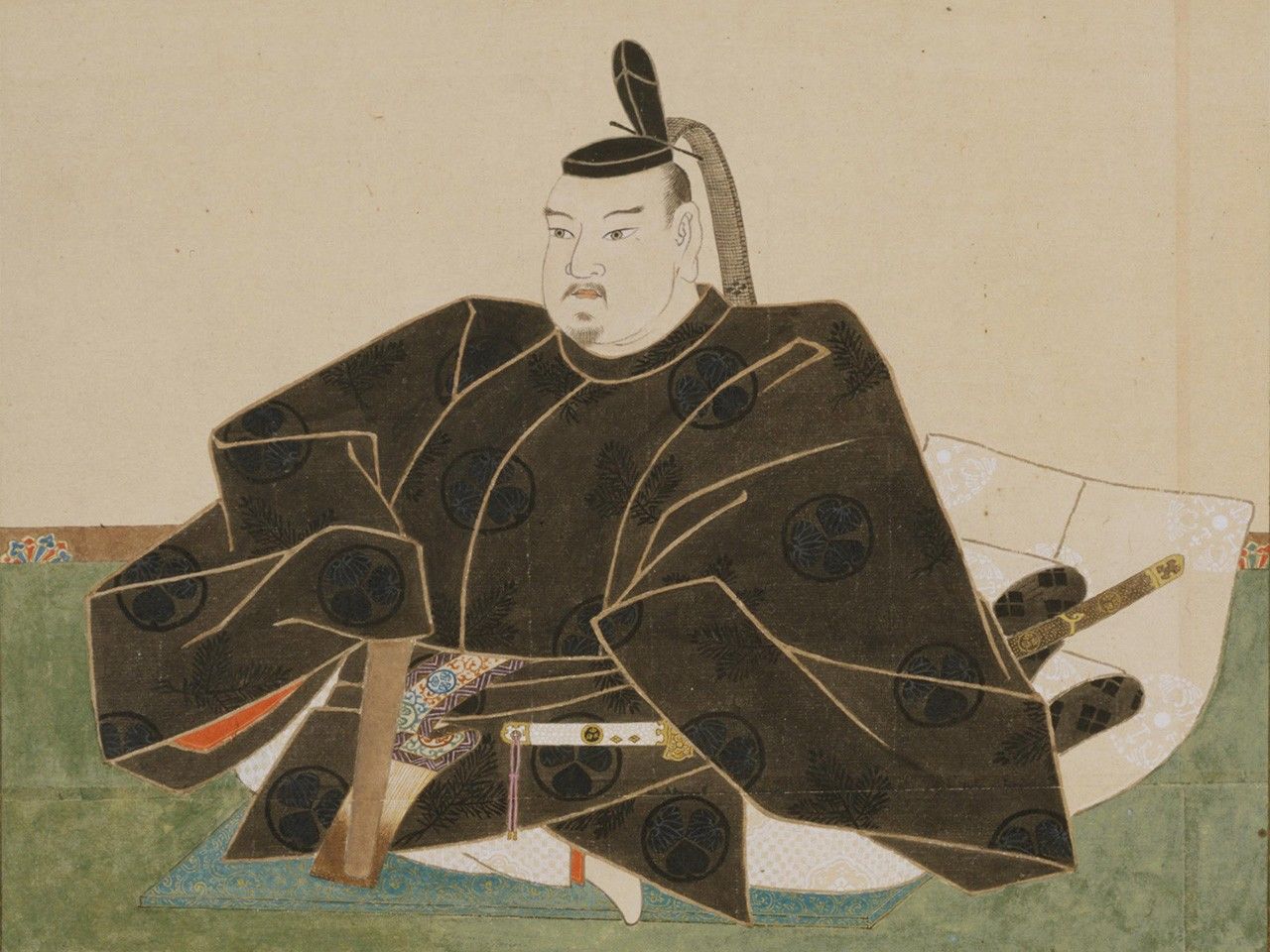 A portrait of Tokugawa Iemitsu. Although he became shōgun when Hidetada abdicated in 1623, his father retained actual power until his death in 1632. (Courtesy the Historiographical Institute, The University of Tokyo)

In order to ensure that the shogunate would continue, Iemitsu needed to have a child. This was a serious political matter, and here was where Ofuku showed her persistence.

A Series of Births

In 1629, Ofuku gained court rank and was newly known as Kasuga no Tsubone. Kasuga acted as a go-between to find concubines for Iemitsu, bringing women like Ofuri, Oraku, and Otama into Edo Castle. Ofuri was the first to become pregnant, giving birth to a daughter in 1637. Iemitsu also showed new interest in women already in the castle, starting relations with his wife’s attendants Onatsu and Orisa. 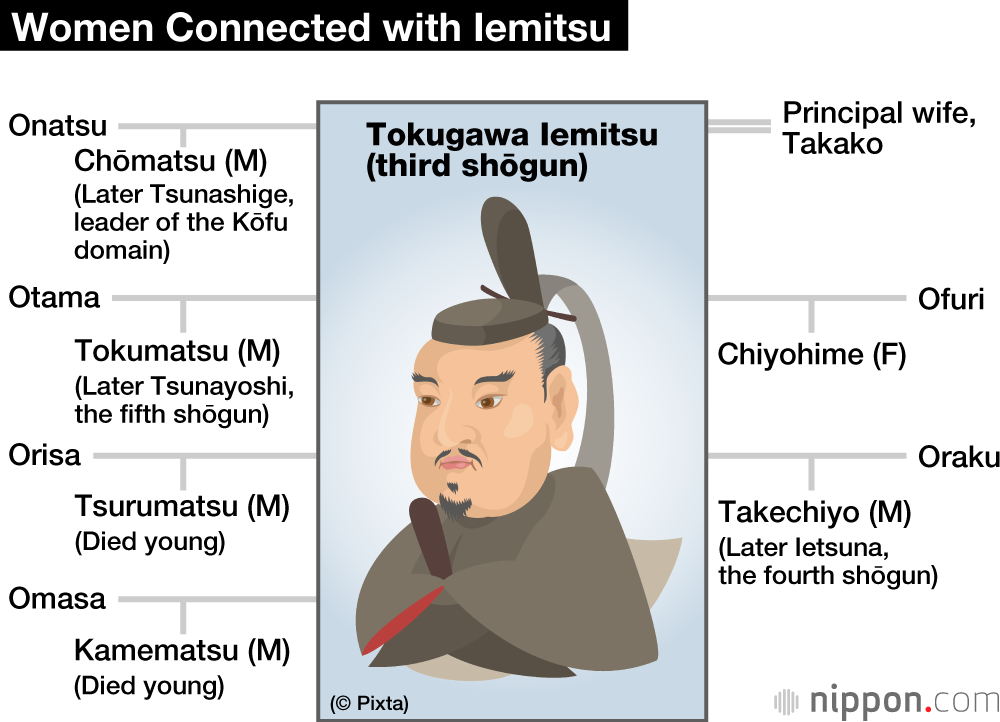 Prepared by the author based on various sources.

Iemitsu’s concubines then successively gave birth to five boys. Two died in early childhood, but two would go on to be shōguns—Ietsuna and Tsunayoshi—and one would become the leader of the Kōfu domain (now Yamanashi Prefecture).

In the middle of this series of births, however, Kasuga no Tsubone died of illness in 1643. When Iemitsu had earlier fallen ill with smallpox, she is said to have sworn never to take medicine herself, while praying for his recovery. Thus, she refused treatment or medicine, until Iemitsu himself insisted. Nonetheless, she passed away at the age of 64.

After her death, sparks flew over the succession, as each of the three mothers of Iemitsu’s sons staked their respective claims. While Tsubone’s system had ensured the succession would remain within the family, it could not guard against this kind of discord.

(Originally published in Japanese on November 18, 2021. Banner photo: A portrait of Kasuga no Tsubone, an important figure in the establishment of the Tokugawa shogunate. Courtesy of the University of Tokyo Historiographical Institute.)