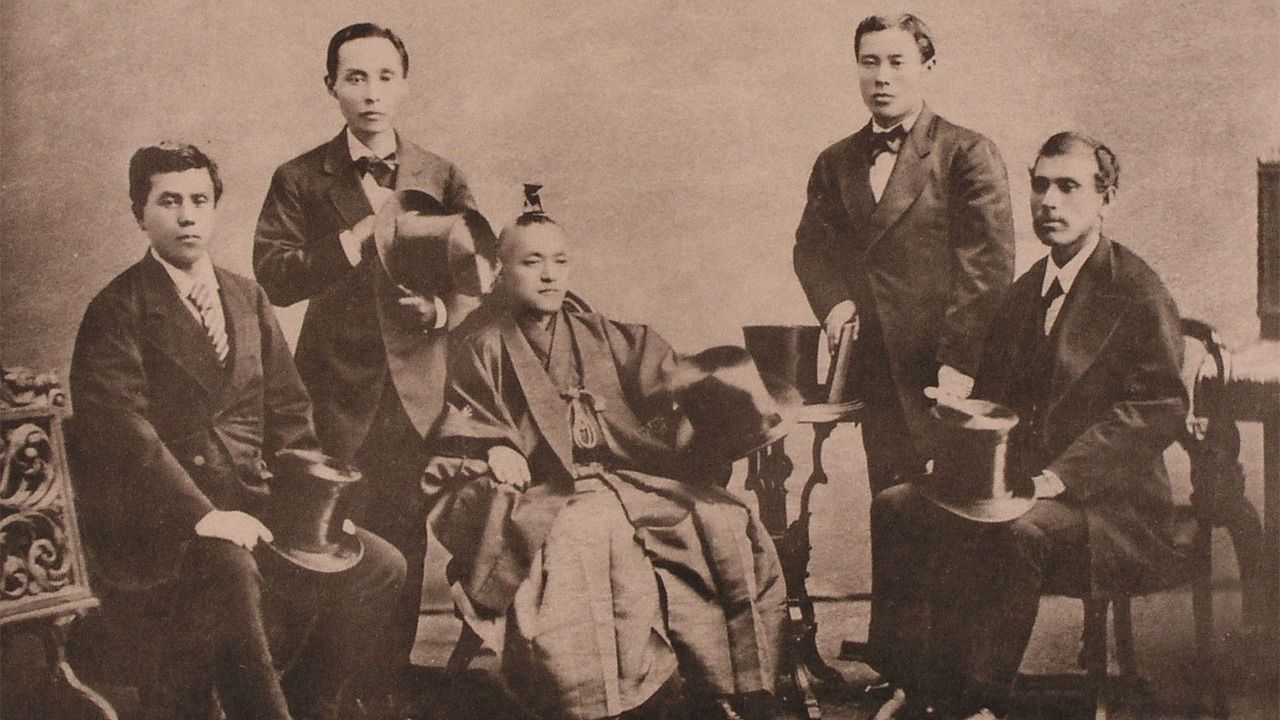 The Iwakura Mission: Japan’s 1871 Voyage to Discover the Western World

History Culture Society Jun 7, 2019
A ship carrying over 100 Japanese leaders, government officials, and students set off on a voyage of discovery in 1871, seeking blueprints for constructing a modern nation.

The past 150 years of Japanese history can broadly be divided into three periods of success and failure. In the five decades after the Meiji Restoration of 1868, the country navigated smoothly through early modernization, overcoming the might of Russia in a 1904–5 conflict, and allying itself with the winning side in World War I. By 1918, Japan had risen to the ranks of the world’s leading powers. In the second stage, however, rampant overconfidence and a shift to militarism carried the country to painful defeat and the brink of annihilation in 1945. It was only after the humiliation of several years of Allied occupation and the threat of losing sovereignty altogether that Japan regained independence and entered a third stage of miraculous industrial growth, which swelled its economy to the second largest in the world.

Despite long-term stagnation, Japan still has the third biggest GDP in the world and its people enjoy comfortable, peaceful lives. The foundation for this prosperity lies in the success of modernization in the late nineteenth century. Where did the process begin? One answer might be in the Iwakura mission, a globe-trotting diplomatic voyage completed in the early days of the Meiji era (1868–1912).

In August 1871, the new Meiji government abolished the traditional domains of Japan, replacing them with prefectures under centralized authority. This bloodless revolution, transferring power away from the leaders of each domain, was achieved through the prestige of Emperor Meiji, the head of the Shintō faith. After 260 years of the Tokugawa shogunate, it was a huge transformation to dismantle the feudal system. Yet, just four months later, the architects of this change—Iwakura Tomomi, Kido Takayoshi, and Ōkubo Toshimichi—departed on an 18-month journey to observe conditions in the United States and Europe. Iwakura led the mission, which is named after him, supported by Kido and Ōkubo. It was extraordinary timing for the country’s leaders to travel overseas and seek out blueprints for constructing a future state. 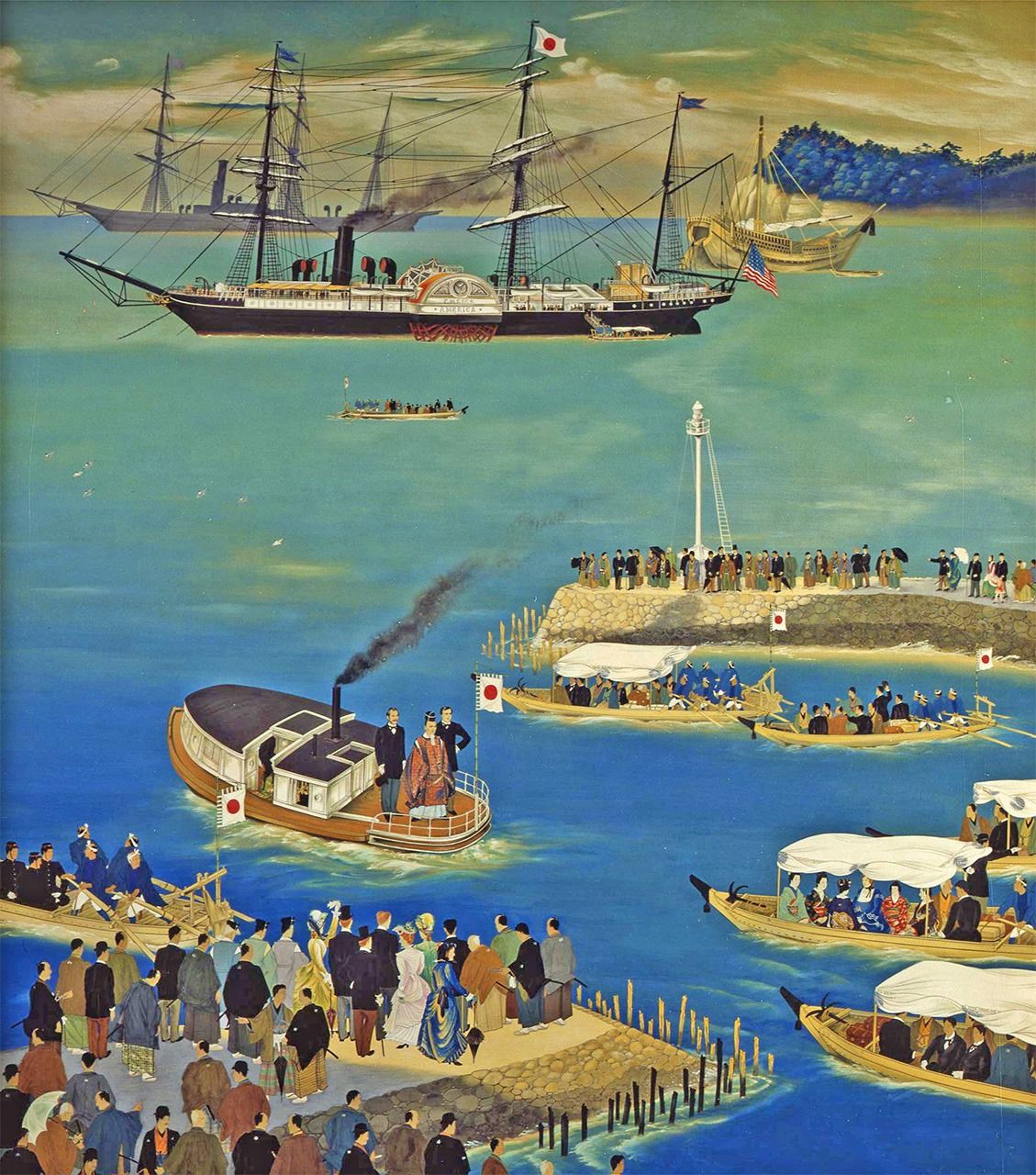 Iwakura taishi Ōbei haken (The Iwakura Mission to America and Europe) by Yamaguchi Hōshun. The SS America in the background is the steamship that transported the group. (Courtesy Meiji Memorial Picture Gallery)

The mission consisted of some 50 members, including Itō Hirobumi and others who would become Japan’s new elite, and was accompanied by 50 students. The aim was to bring together what had been learned from other missions in the twilight of the shogunate by thinkers like Fukuzawa Yukichi and Shibusawa Eiichi. Perhaps if the leaders of the new state had not had the strength to immediately put their plans into action, the voyage could not have taken place.

Alongside the main branch of government, there were representatives of different departments of the bureaucracy, forming an organized team of enquiry with set areas for study prepared in advance. The mission’s members visited 120 cities and settlements in 12 countries, where they observed and sincerely strove to learn about every aspect of Western civilization from politics and administration to the military, diplomacy, economics, industry, education, religion, transportation, communications, culture, and recreation. They also conferred with monarchs, prime ministers, business leaders, and top academics. 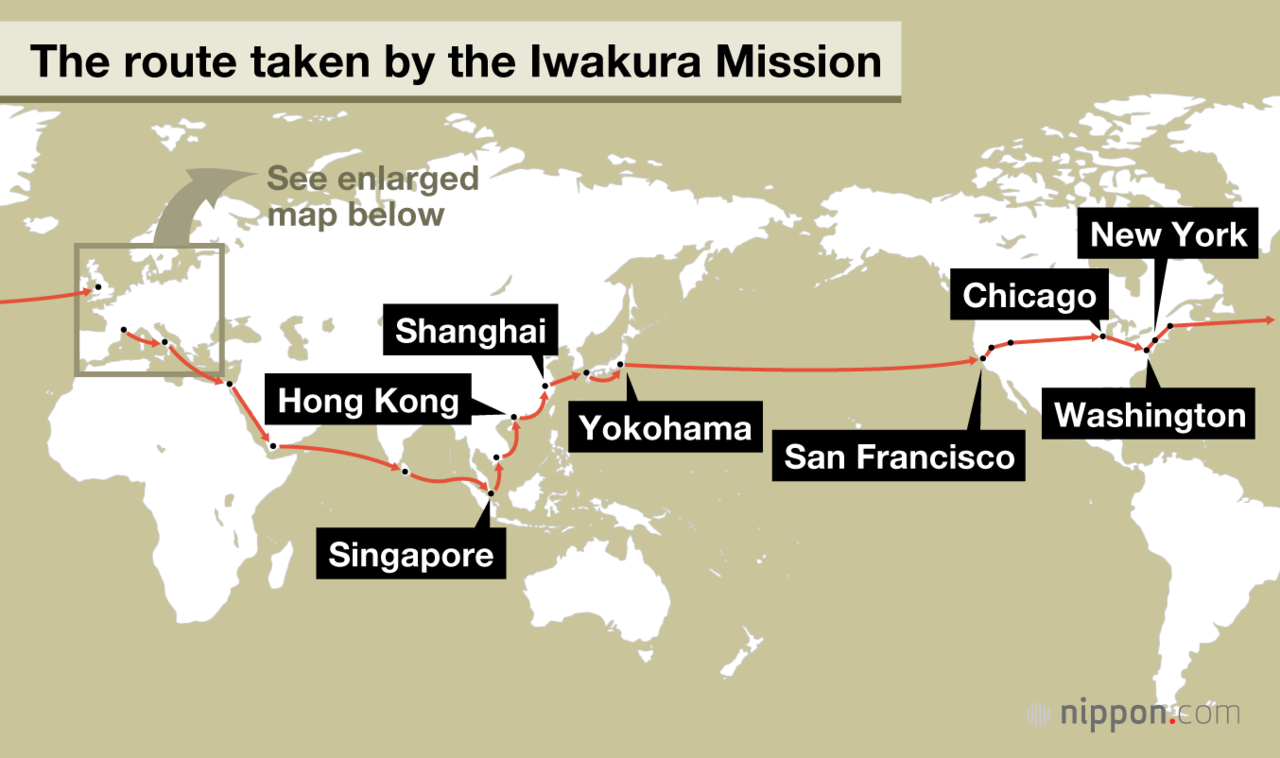 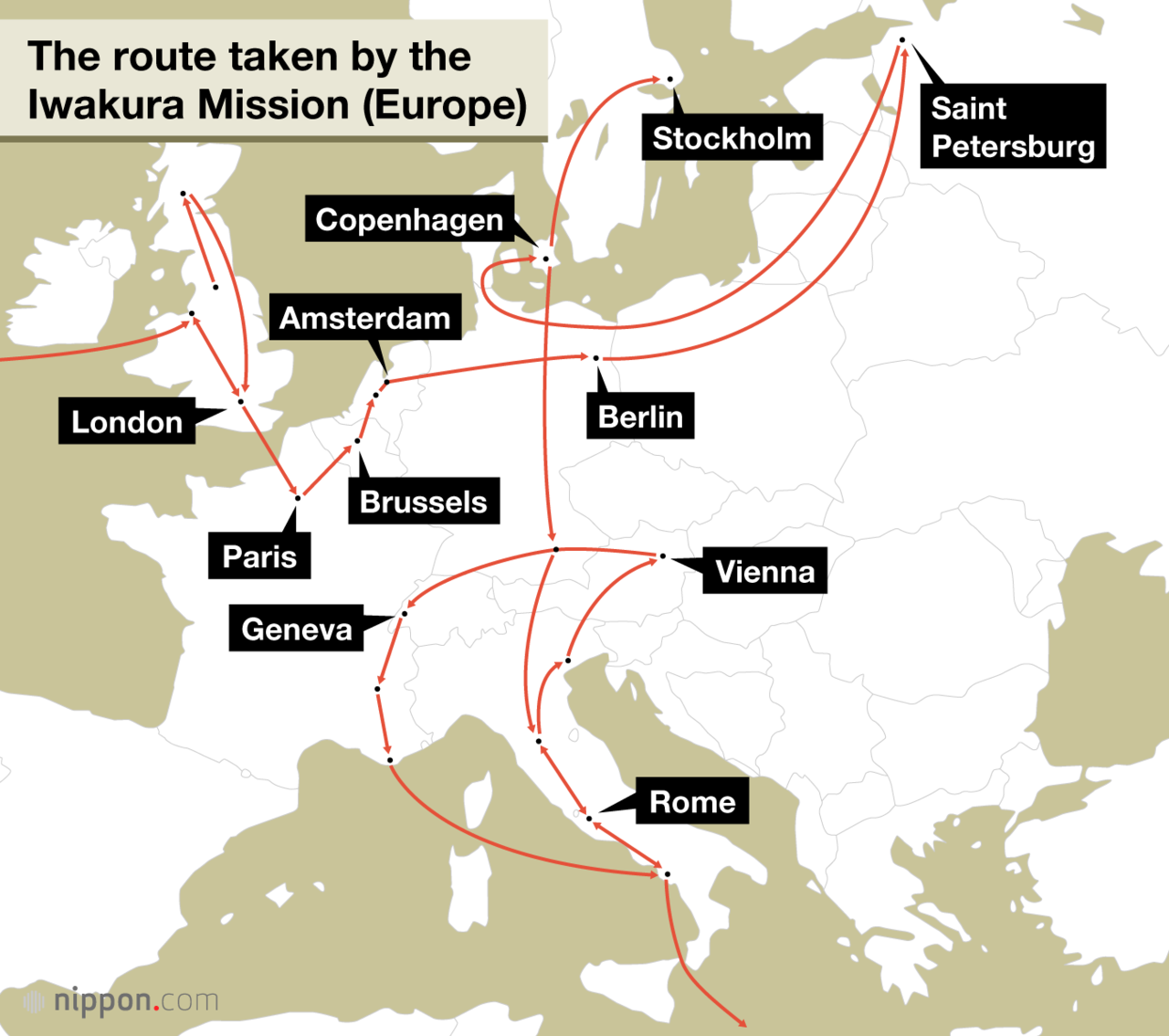 Level-headed examination of the mechanisms that supported the Western powers’ prosperity revealed what was required: technological advances, a fruitful interweaving of trade and industry, and a hard-working populace. They saw much of Britain in particular, visiting not only its railways and communications facilities but also coal mines, ironworks, machine shops, and even beer and biscuit factories. Their inspections showed what an industrial revolution could bring, and they learned that Britain had gone through this process only four or five decades earlier.

The travelers also saw the dark side of Western civilization. They observed another face of flourishing London by visiting the slums where the city’s needy gathered, learning about the prevalence of fraud and robbery. In the cultural capital of Paris, they heard of the recent tragedy when the city—while under the control of the radical Commune—had suffered bombardment by Prussian troops. In Berlin, they had an audience with Otto von Bismarck, the leader of the newly created state of Germany, who expounded on his experience of how might made right in international diplomacy. On the route home, the mission ship made stops in the Middle East and Asia, where shabby brothels, a rebellion in Sumatra, and the opium trade in Hong Kong gave eloquent testimony of the miseries of colonized nations.

The group compared different political systems in practice, seeking the most appropriate model for Japan. The broad territory and relatively brief history of the United States made it an unsuitable choice. Russia lagged behind its peers under an absolute monarchy, while Belgium, the Netherlands, and Switzerland were too small. The general sentiment was that Japan should take Britain as a model, while setting off at first following the German system. The members of the mission now understood Japan’s level of development by world standards, and that it was possible to catch up after a few decades through steady improvements.

The most startling discovery was how Christianity acted as a spiritual pillar holding up Western civilization. The mission members saw it as an ethical support and an encouragement to diligence. They began to discuss what, if anything, Japan could employ in its place.

The voyage was built around research. Every day, members of the delegation debated and studied, while their shared experience and understanding led to policy decisions based on actual conditions following their return. The backbone of the new policy derived from a renewed appreciation of wakon yōsai (Japanese spirit and Western learning), an approach to modernization that sought to capitalize on foreign technology without losing national identity. Other influential attitudes were summed up in the slogans fukoku kyōhei (enrich the country, strengthen the military) and shokusan kōgyō (increase production, promote industry). These were highly significant to Japan’s success in preserving its independence.

The first task for Japan’s leaders once back home was to bring a halt to a plan, developed by the caretaker government in their absence, to send a punitive expedition to Korea. After some readjustment of domestic affairs, they announced plans to steadily modernize along Western lines. Ōkubo headed an autocratic government focused on development. Following the deaths of Kido and Ōkubo, Itō Hirobumi came to the fore and set about drawing up a constitution. This positioned the emperor at the center of the state, with the aim that the imperial system and Shintō would perform the same role as Christianity in the West. The decision was partly based on praise for Japan’s imperial system by the French economist Maurice Block and advice from the German economist Lorenz von Stein that the constitution should be founded on Japanese tradition.

The main target of the Meiji state was to achieve true independence through revision of unequal treaties signed with Western powers before the fall of the shogunate. To do this, it had to win recognition that it was a modern state with a corresponding industrial base and legal system. Members of the mission and its accompanying students contributed much to these tasks under the leadership of Ōkubo and Itō. At the same time, they did not forget the importance of preserving Japanese tradition.

Among those who traveled on the Iwakura Mission were Hayashi Tadasu, who worked to conclude the Anglo-Japanese Alliance in 1902 and became the first Japanese ambassador to Britain; Makino Nobuaki, who was just a boy of 10 when the mission began, and later represented Japan at the Versailles Peace Conference of 1919; and Tsuda Umeko—the youngest Iwakura traveler, at just six years old—who would be a pioneer in women’s education and the founder of the institution later renamed after her as Tsuda University.

In early Meiji, the generation that would build a new Japan were awed by the potential applications of Western civilization, and sought to absorb them. Yet too much emphasis on material progress set Japan on a mistaken path of militarism. After World War II, the country adopted a pacifist Constitution that it has upheld ever since.

Japan has assimilated aspects of both Chinese and Western culture, while incorporating its own Shintō based on reverence for nature, to form a distinct civilization. As the process of Westernization continues around the world, the country’s value lies in its separate tradition, and it has become the state that the Meiji generation longed to build.