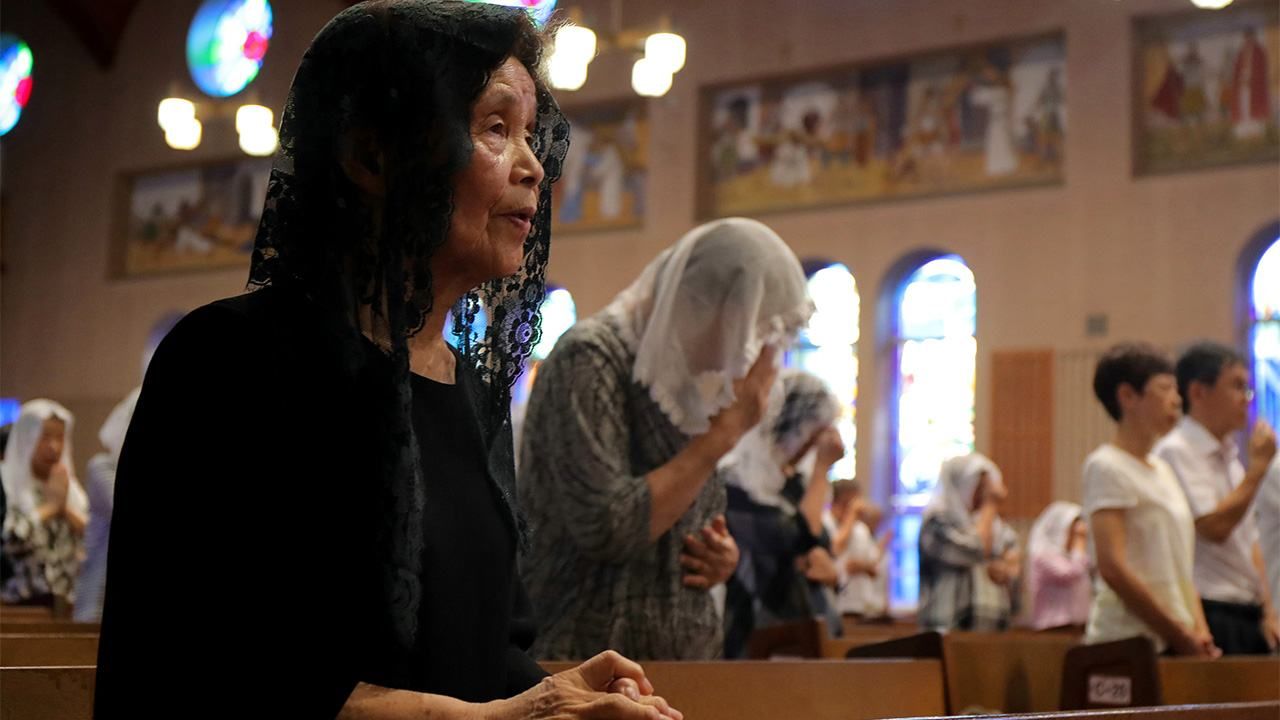 A Dream of Visiting Japan

Pope Francis will visit Japan from November 23 to 26, traveling from Tokyo to Nagasaki and Hiroshima before returning to the capital. As the Vatican City head of state, he will make official visits to Emperor Naruhito and Prime Minister Abe Shinzō, while also taking the opportunity to meet as many citizens as possible, including the country’s Catholics, hibakusha in Nagasaki and Hiroshima, and school and university students. Born in 1936, he is already in his eighties, but he has prepared an energetic schedule for his few days in Japan.

As a Jesuit priest in his native Argentina, he dreamed of going to Japan—where the Spanish missionary and cofounder of the Jesuits Francis Xavier made many converts in the sixteenth century—and is said to have wished to perform missionary work there himself. Early health problems quashed this ambition. Now, though, as the first pope from South America, he can finally make his Japanese trip.

The Society of Jesus was founded in Paris in 1540. With papal approval, Xavier—one of the society’s creators—went to Japan in 1549 to win converts to Catholicism. Some 150 years after the start of the Age of Discovery at the turn of the fifteenth century, Europeans were landing in Japan for the first time. The spread of Christianity, the beginning of trade between the two sides, and the introduction of modern muskets made it a major turning point for both Japanese and world history.

As Japan was mired in the Warring States period (1467–1568), the harsh existence of the masses meant that they were drawn to the promise of salvation offered by Christianity, and the number of converts soon soared. Propagation also reached the daimyō level; the first leader to convert was Ōmura Sumitada of Ōmura in Hizen Province (now Nagasaki Prefecture). Catholicism spread rapidly through his territory, such that by the start of the Edo period (1603–1868) almost all of the 60,000 Ōmura residents were believers.

In 1582, the daimyō of Ōmura, Arima, and Ōtomo sponsored a mission of four young boys to Europe, which left from Nagasaki. Pope Gregory XIII (1502–85) received the boys in Rome in 1585. This is the first recorded visit to Europe by Japanese.

Yet dark times followed for the Catholics in Japan. Toyotomi Hideyoshi (1537–98) issued an edict forbidding Christianity in 1587 and crucified 26 Catholics—both Japanese and foreign— in 1597. In the Edo period, Tokugawa Ieyasu (1543–1616) issued a new edict in 1613 banning activities by priests, increasing oppression of Catholics, and forcing them to abandon their faith. From the mid-seventeenth to the eighteenth century, Christianity seemed to vanish from the country.

Despite the ban throughout the Edo period, in various locations across Japan believers kept the faith, while pretending to be Buddhists, until the fall of the shogunate. Shortly before the Meiji Restoration in 1868, when Japan had reopened its ports to foreign ships, many “hidden Christians” were discovered in Urakami, Nagasaki, and sent into scattered exile around the west of Japan, where hundreds of them died. Strong condemnation from the Western powers led to the abolition of the anti-Christian edict, allowing freedom of religion once more.

In his visit to Nagasaki, Pope Francis is particularly keen to go to the Hypocenter Park—built where the atomic bomb landed—and the Twenty-Six Martyrs Monument.

In 1868, a little later than its Western peers, Japan began on a path to imperialism. Victories in wars against China in 1894–95 and Russia in 1905 confirmed its place as one of the world powers. The Manchurian Incident of 1931 was the first stage in a new conflict against China, and Japan expanded the war further by starting hostilities with Britain, the United States, and the Netherlands in 1941. Four years later, Japan was on the brink of total defeat.

The United States had succeeded in building atomic weapons, and President Harold S. Truman ordered two of them to be dropped on Hiroshima and Nagasaki to bring the war to an early close. The bombings killed a total of 210,000 people. In Nagasaki, the bomb landed in the Urakami area, where most of the descendants of the hidden Christians lived. Of the 73,000 victims, more than 8,000 were Catholics.

Pope John Paul II also went to Hiroshima and Nagasaki when he made the first papal visit to Japan in 1981. “War is the work of man. War is destruction of human life. War is death,” he said in a speech addressing the world. This was a highly influential boost for movements advocating peace and the abolition of nuclear weapons.

At a point when the local Catholic population in Nagasaki had made considerable progress toward recovery from the devastating wartime blow, many were not actively involved with these issues. The pope’s words galvanized them to become part of the two movements. 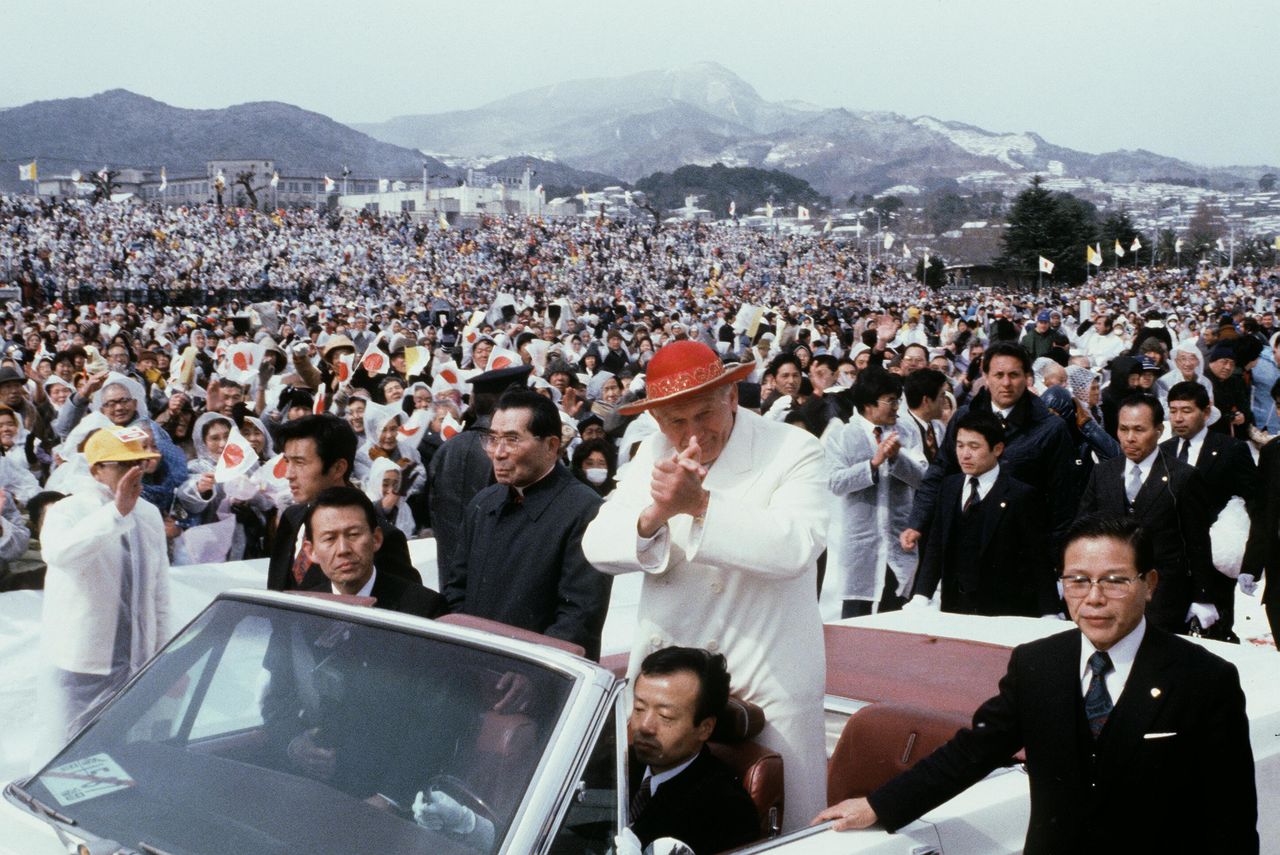 A Step Back for Disarmament

Pope Francis will come to Japan with his early enthusiasm for the country and his respect for the history of its martyrs. He feels particular grief for the children exposed to radiation in the Nagasaki bombing.

There is a photogragh taken by US military photographer Joe O’Donnell shortly after the atomic bombing at Nagasaki that shows a boy standing upright at a cremation site, carrying his dead younger brother on his back. He bites his lip in anguish before the burning of his brother’s body. Pope Francis was deeply moved by the picture, widely distributing a card with a reprint, and he has also spoken out repeatedly about the need to eradicate nuclear weapons.

Now the world awaits the pope’s message in Nagasaki on November 24. He will speak at the Hypocenter Park to 1,000 people, including Catholics, hibakusha, school students, and other members of the public.

While nuclear disarmament had made some headway, escalating tensions between the United States and Russia and the termination of their bilateral Intermediate-Range Nuclear Forces Treaty in August have begun to reverse this progress. Both countries have announced that the nuclear situation has changed, and will increase production of smaller weapons.

In 2016, Barack Obama became the first sitting US President to visit Hiroshima. In his speech in front of the Cenotaph at the Peace Memorial Park, he talked about the US development of nuclear weapons and their use at Hiroshima and Nagasaki, and lamented the continued existence of stockpiles. While humanity had the knowledge to create nuclear weapons, it still lacks the ethical wisdom to renounce them.

Pope Francis must surely have heard or read Obama’s speech. As one of the world’s most important spiritual leaders, he will undoubtedly talk about the present lamentable nuclear situation. There will be much interest in what words he directs at the nine nations that currently possess nuclear weapons.

At our Nagasaki peace group, we see the people around the world as global citizens who all live equally under the threat of these weapons. A large-scale nuclear war would destroy the environment, devastate agriculture, and bring about famine and possible human extinction. We need to understand that everyone faces this crisis, whether they come from a country with nuclear capabilities or not.

Now, in the twenty-first century, the pope’s message should persuade those in places where conflict continues and those who continue to support the possession of nuclear weapons as a way of preserving peace through power that they bear a heavy responsibility for ensuring the safety of all the world’s citizens.

(Originally published in Japanese. Banner photo: People pray for the victims of the atomic bombing of Nagasaki at a mass held at Urakami Cathedral in Nagasaki on August 9, 2019, the seventy-fourth anniversary of the event. © Jiji.)