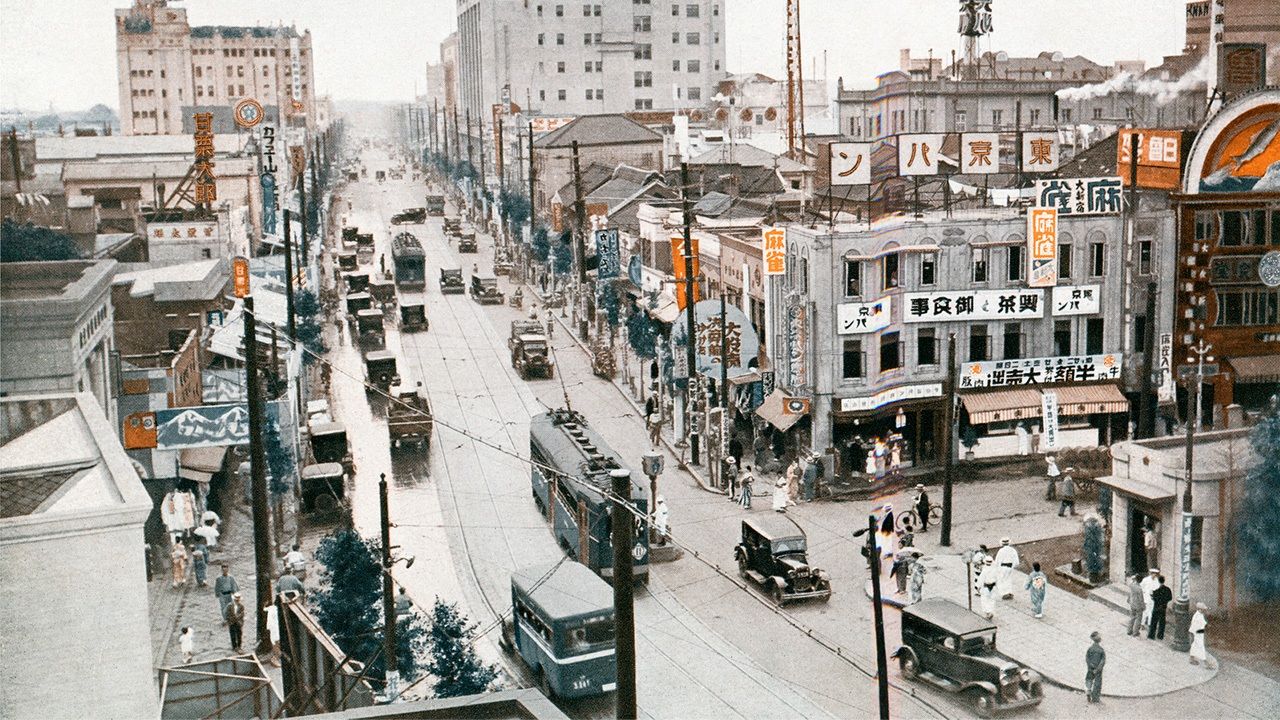 Becoming a Tokyo Center: A History of Shinjuku

Culture Society History Mar 17, 2020
Shinjuku, one of Tokyo’s most famous districts, bustles with both people and history. This article traces the area’s development from the opening of Shinjuku Station in 1885 as an undistinguished stop on Japan’s fledgling rail network.

Tokyo’s biggest shopping district, Shinjuku, developed around the station bearing the same name. More than 3.5 million passengers pass through Shinjuku Station each day, which is recognized by the Guinness Book of Records as the world’s busiest. The transportation hub had undistinguished beginnings, though. It opened in 1885 as a stop on the Shinagawa Line, a section of Japan’s fledgling rail network that later became the Yamanote Line. At the time many communities set themselves against new stations, fearing that locals would use them to do their shopping elsewhere. Opposition from residents of Naitō-Shinjuku, a bustling former post town on the Kōshū Kaidō highway, meant that the station was built some distance away to the west, in a thicket of trees. Only around 50 people used the line each day, and on rainy days there might be no passengers at all.

In 1889, the station gained another line, when the forerunner of today’s Chūō Line came into service, running west out of Shinjuku to Tachikawa. Even so, it retained a bucolic atmosphere, with only one exit to the east. Missing a train meant waiting two or three hours for the next one. The tea stalls outside the station had benches, which were likely covered with the fashionable red blankets of the time, and passengers could pass the time there drinking tea and eating snacks. In early summer, some might take the opportunity for a nap. The two tea stalls are said to have been nicknamed after a tanuki (raccoon dog) and fox, respectively, looked after by each of the owners. I cannot help but envy the pastoral tone of those early days.

Now famous for its fruit parlor, Takano also opened for business in 1885, the same year as Shinjuku Station. At first, it specialized in silkworm cocoon brokerage and used tools, with fruit as a sideline. Takano is closely connected with Shinjuku Gyoen, a contemporary park that in the Edo period (1603–1868) was part of the residence of the Naitō clan, who gave their name to Naitō-Shinjuku. In 1872, it became a testing ground for agriculture, and in 1887 muskmelons were successfully grown there. Takano began selling muskmelons in 1920, changing course to build a name for its luxury fruit. 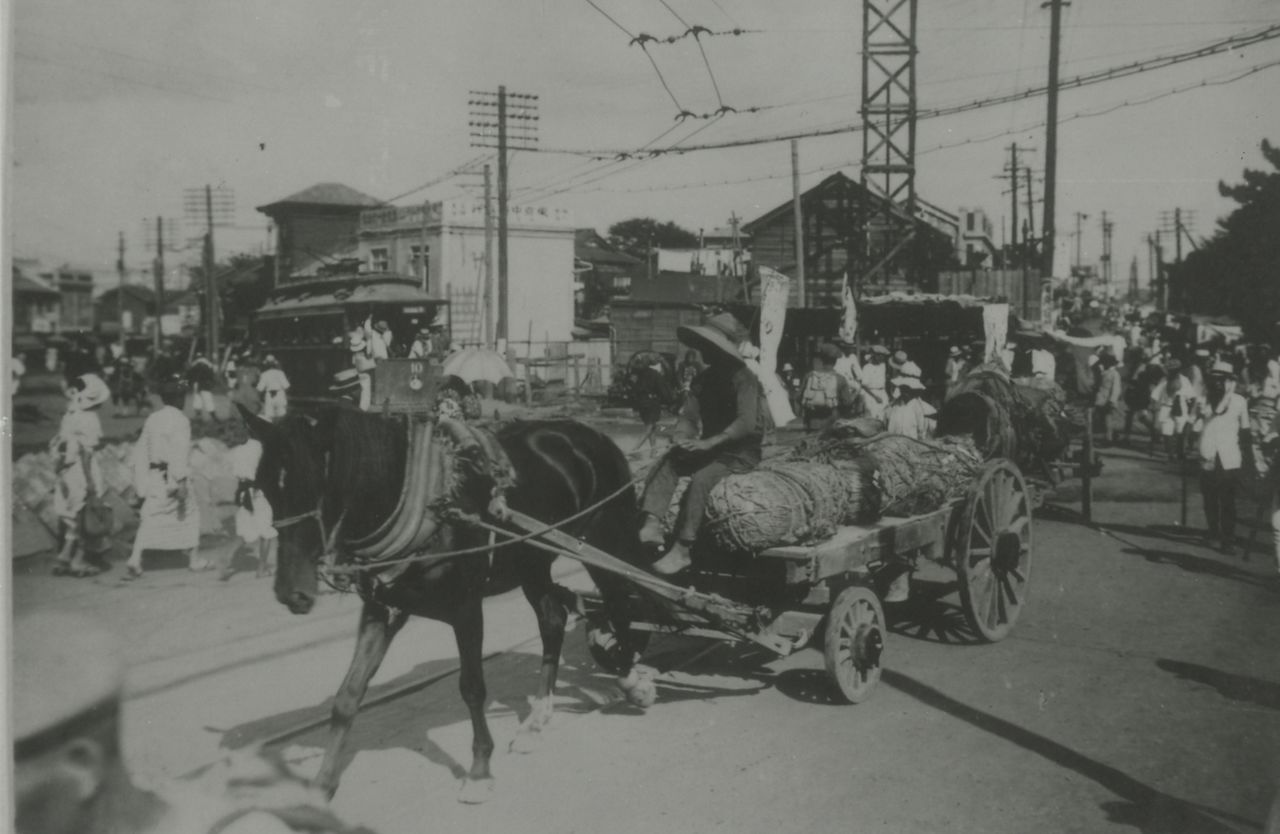 A horse and cart in Shinjuku in the Taishō era (1912–26). (Courtesy Shinjuku Historical Museum)

A New Center for Tokyo

The Great Kantō Earthquake in 1923 brought devastation to the capital. Shinjuku in western Tokyo remained relatively unscathed, though, and began its rise to prominence as a shopping district. Takano constructed a new Western-style building in 1926 to house its fruit parlor. The Nakamuraya bakery moved to Shinjuku in the early twentieth century; it was owned by Sōma Aizō and Kokkō, supporters of the Pan-Asian movement. The escaped Indian revolutionary Rash Behari Bose married their daughter Toshiko and provided the recipe for the curry served in the Nakamuraya café, which opened in 1927. The bookstore Kinokuniya was founded in the same year under the leadership of Tanabe Moichi, who split the company off from the family charcoal business. The store also boasted a second-story gallery that made it a new center for culture in Tokyo.

The department store Isetan opened for business in 1933. Two years later, it expanded through the purchase of the neighboring building, and escalators installed in the connecting section became an attraction for customers. Isetan’s skating rink also drew in young people and families. The Musashinokan movie theater, known as the place to see foreign films, and the Moulin Rouge Shinjuku theater were further attractions for salarymen, students, and other emerging classes with money to spend.

World War II damage reduced Shinjuku to rubble, leaving only the station, Isetan, and a few other buildings standing. The area rose from the ashes with a black market at Shinjuku Station’s east exit, set up on August 20, 1945, just five days after Japan’s surrender, with the slogan “The Light Shines from Shinjuku.” An essential location for the people of the war-battered city, it sold food, clothing, and daily goods, and included places to eat and drink and various kinds of entertainment.

Japan’s first strip shows began at the Teitoza movie theater in 1947. In these “picture-frame” shows, the topless performers enacted famous Western paintings on stage. The 2-chōme area was a red-light district in the postwar era, but by the late 1960s it had become Japan’s best-known gay neighborhood, famous for its accepting attitude to satisfying human desires.

Kabukichō’s history also begins after World War II. It was established in 1948 following the ideas of Suzuki Kihei, the head of a neighborhood association who envisioned a lively but respectable shopping area with a kabuki theater. This was how it got its name. It would never be home to a kabuki theater, but the opening of Shinjuku Koma Theater and the establishment of the Chikyūza cinema by the Taiwanese businessman and politician Lin Yi-wen helped set it up as a leading entertainment district. The area’s vigor was also enhanced by the opening of Seibu-Shinjuku Station in 1952. 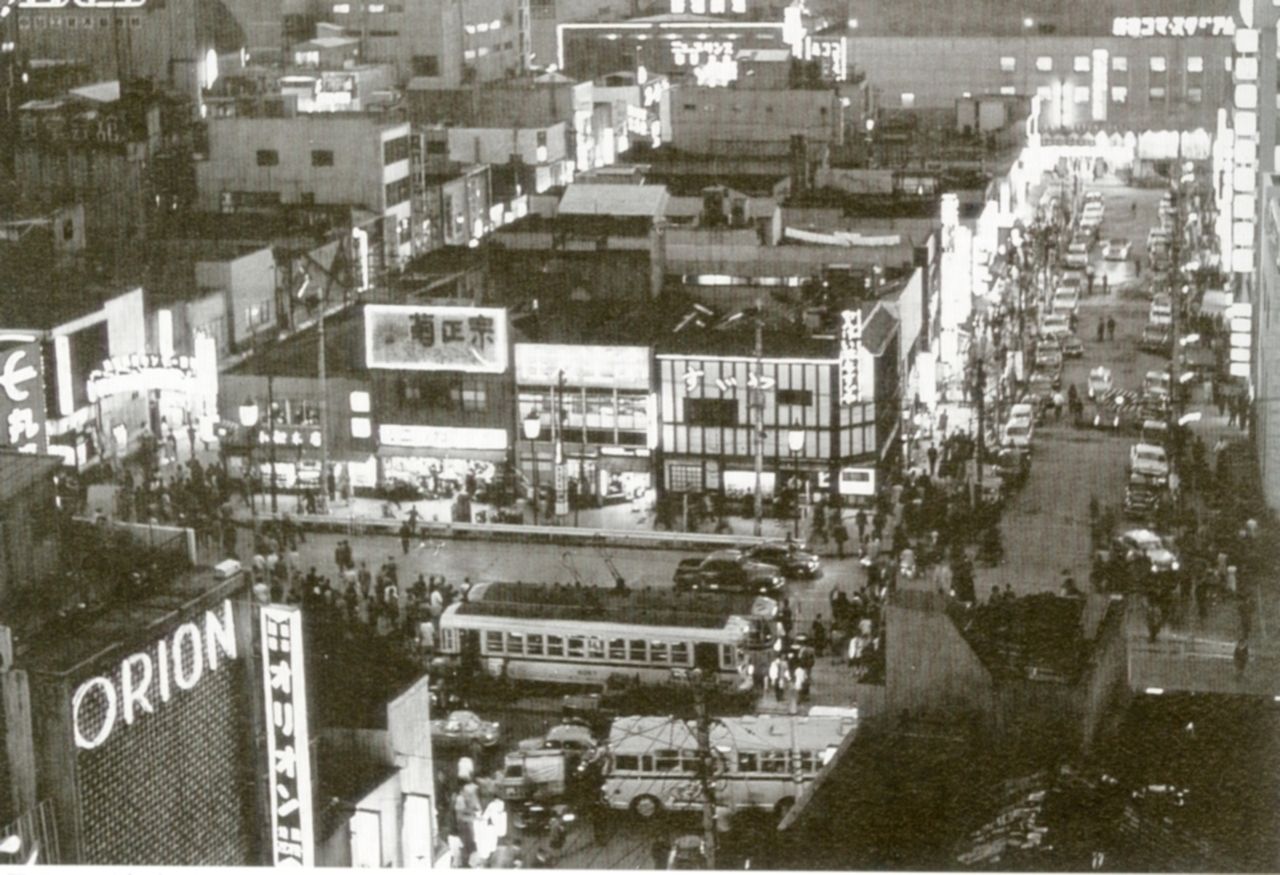 When the Anti-Prostitution Act of 1957 closed down nearby brothels, many in the sex trade set up new establishments in Kabukichō. The area was now a long way from the respectability initially targeted, and from around this time it took on its reputation as a dangerous place to be. Even so, the Lonely Planet guidebook has suggested that “Tokyo’s most notorious red-light district” is “generally safe.” The current reconstruction of the site of the former Milano-za cinema by Tōkyū and others may help the area shed some of its insalubrious image. 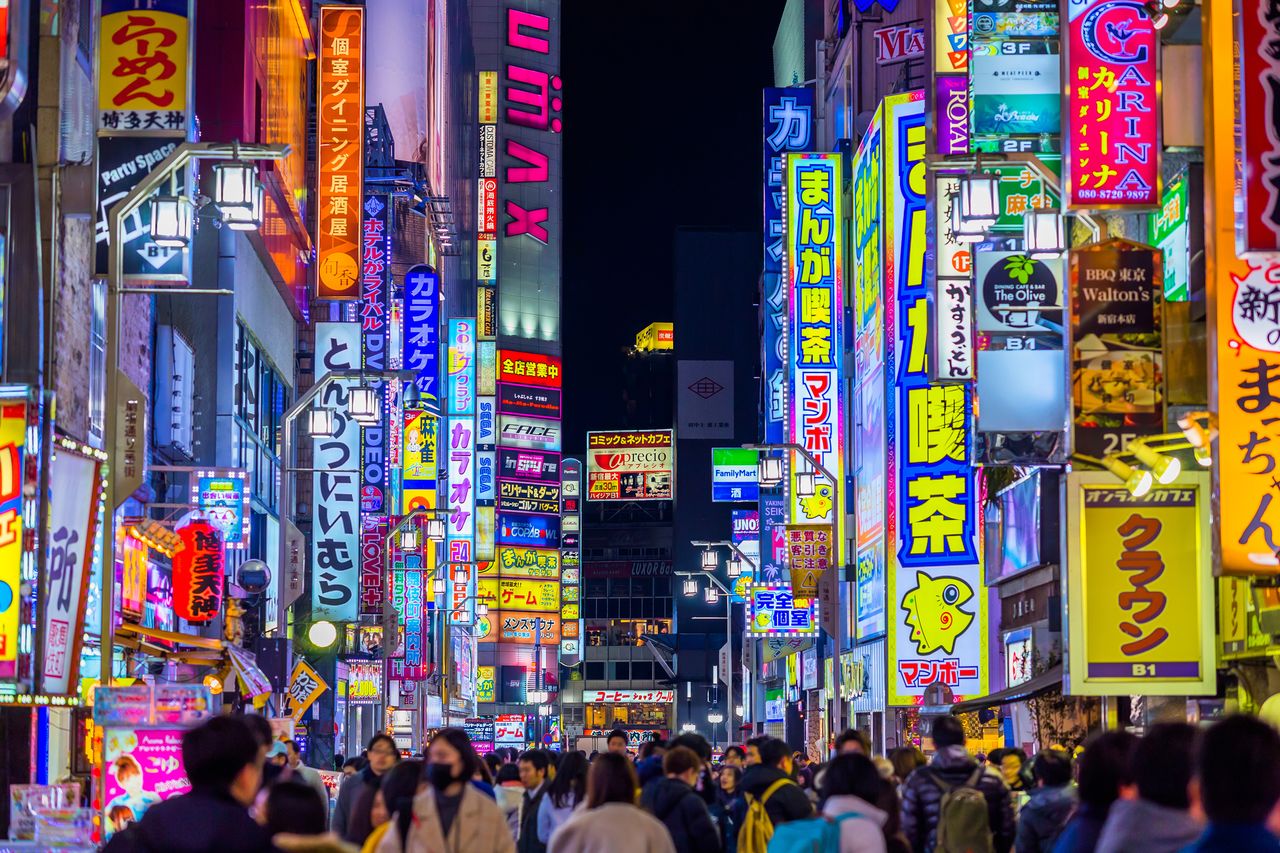 The Shiki no Michi (Four Seasons Path) near the eastern edge of Kabukichō was built on a former streetcar line. On its east side is Golden Gai, an area where black market vendors were once forced to relocate when their stalls outside Shinjuku Station were shut down. It also had many unlicensed brothels when prostitution was still legal in designated areas. Later it developed into an area of bars open until the morning, attracting artists and other cultural creators, and it is still known today for its varied drinking establishments.

A Home for Counterculture

Takano and Nakamuraya went on to be housed in new, modern buildings, while Kinokuniya was rebuilt in 1964 to become one of Japan’s most famous bookstores, with a theater in the attached Kinokuniya Hall. Underground theater performances in a red tent at the nearby Hanazono Shrine, meanwhile, won fervent support from audiences. 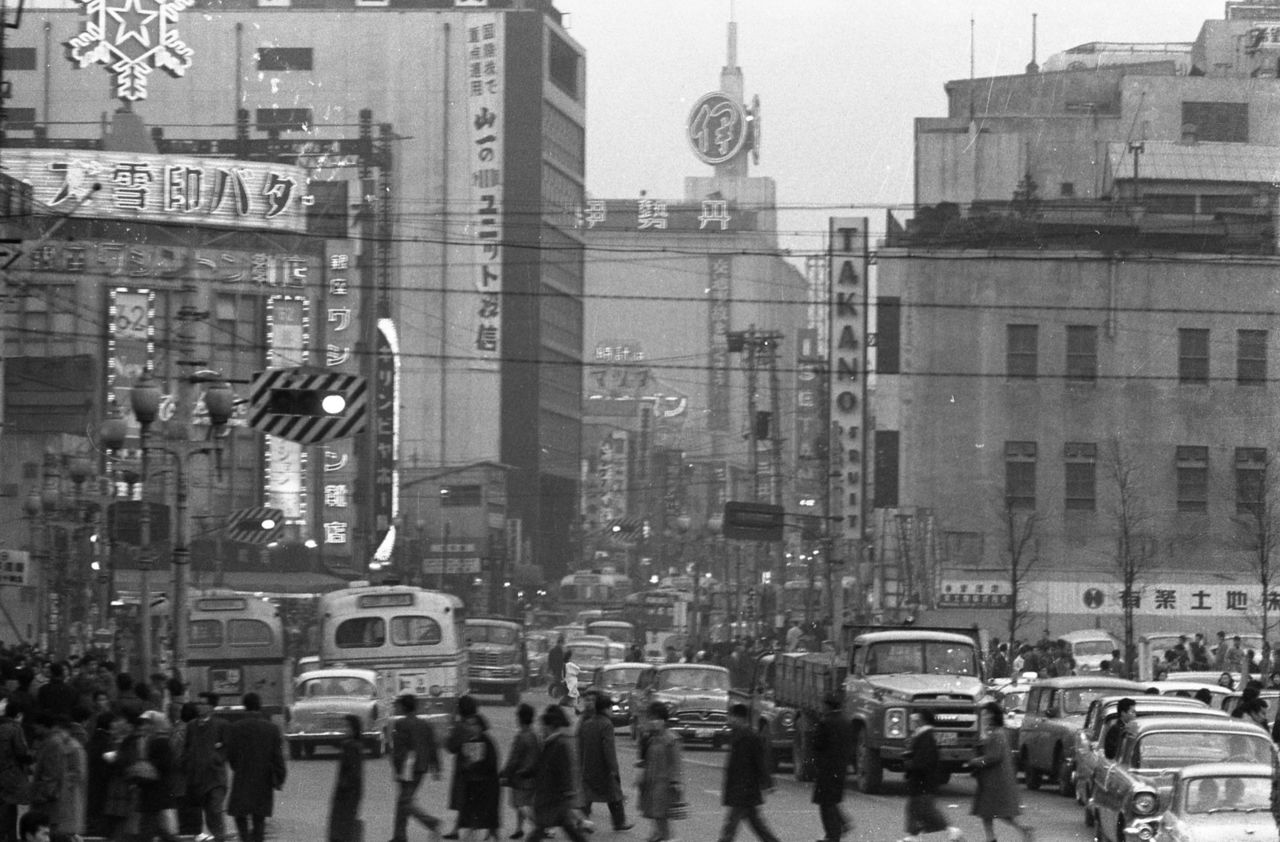 In the 1960s, young people and artists gathered in jazz and classical music cafés to spar over aesthetics and politics. The Fūgetsudō café was notorious for harboring US deserters opposed to the Vietnam War seeking to escape to Sweden. Movie theater manager Kuzui Kinshirō said that “more powerful and compelling dramas than any film or play take place constantly on these streets.” This may still be true of Shinjuku today.

The Yodobashi Purification Plant to the west of Shinjuku Station provided Tokyo residents with clean drinking water, but was also considered an obstacle to development of the area. In 1965, the plant was moved more than 20 kilometers to the west. On its original site grew bristling skyscrapers, which today include the Tokyo Metropolitan Government Building designed by Tange Kenzō, while additional department stores added to the local shopping attractions. Attention then turned to the area south of the station, where new buildings successively sprang up. 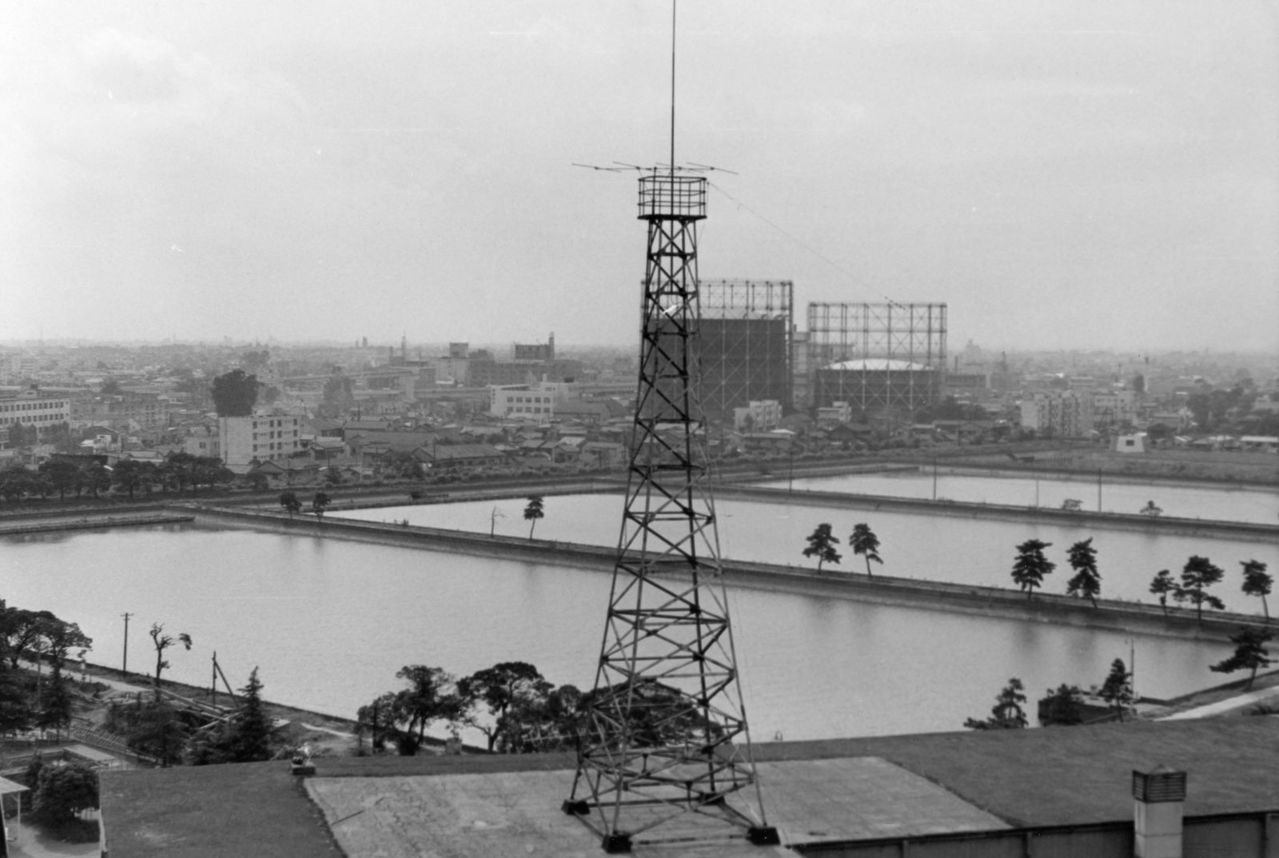 The Yodobashi Purification Plant to the west of the station. (Courtesy Shinjuku Historical Museum) 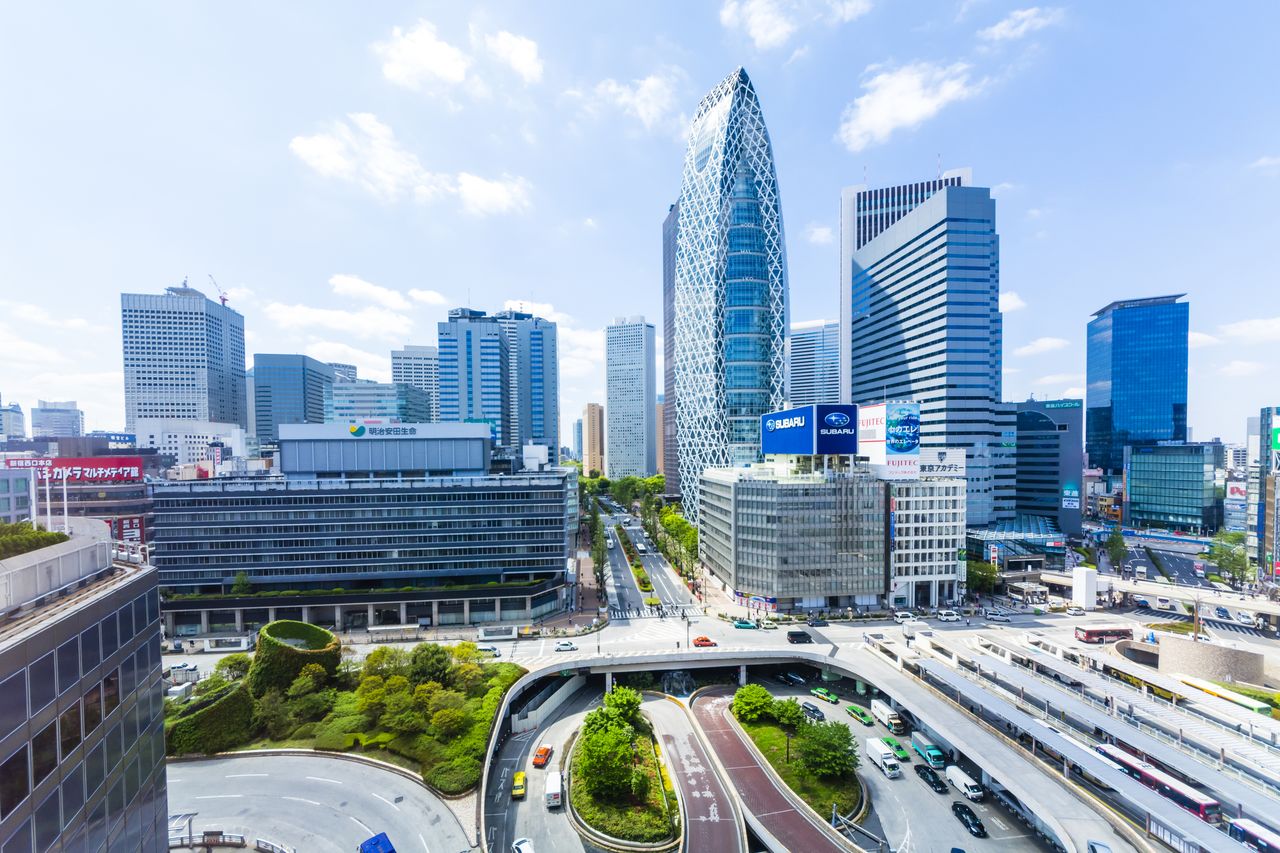 The west of Shinjuku Station today is packed with high-rise buildings. (© Pixta)

It has been a dramatic transformation from the small station surrounded by trees to a bustling area rich in variety, including gleaming high-rise buildings and alleys that recall the former black markets. A new redevelopment project is in the works, and indeed Shinjuku could be said to be like Barcelona’s Sagrada Família, in that construction will never end. It will no doubt keep its status as one of Asia’s leading districts, yet never overly polished and turning nobody away. 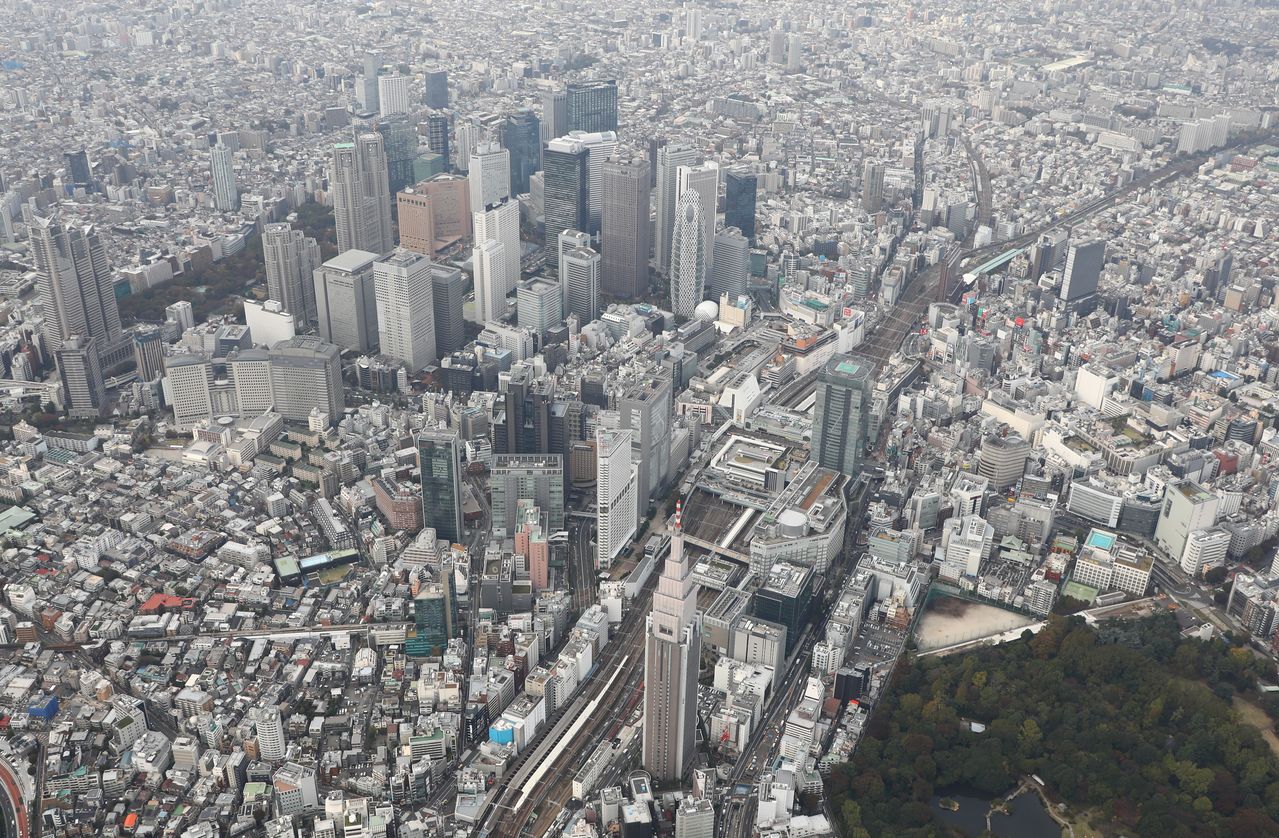