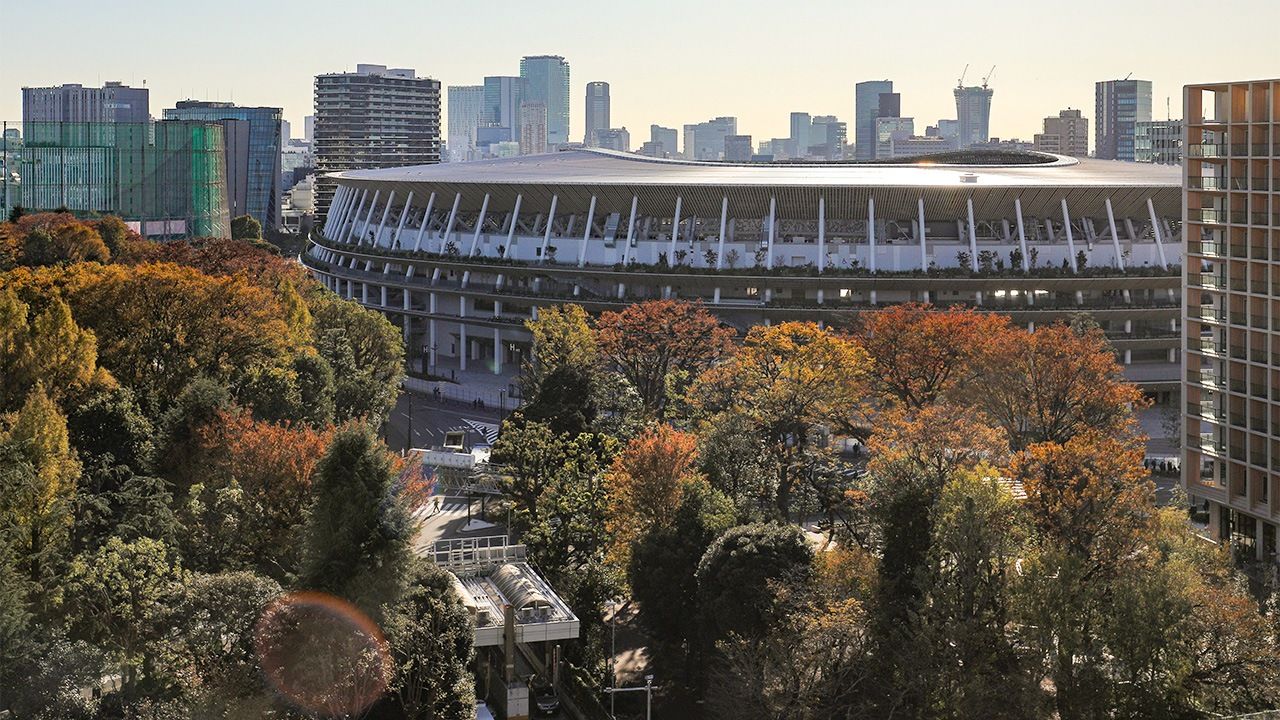 Building for Tokyo 2020: A Shift from Growth to Maturity

Sports Tokyo 2020 Society Guide to Japan Jan 31, 2020
As the Olympics and Paralympics rapidly approach, Tokyo has become a flurry of construction. We look at some landmark developments around the capital.

The Tokyo 1964 Olympic Games highlighted Japan’s rapid economic growth, symbolized by large-scale public construction works like the Shinkansen. In contrast, in 2020, Japan aims at the Olympics and Paralympics to show itself as a mature nation. The country has become the world’s most super-aged society and the games are an ideal opportunity to promote the transition from growth to maturity and from efficiency to comfort. Organizers are working to cater to all who attend, including the aged, non-Japanese, and people with disabilities.

The trendy neighborhood of Harajuku has recently seen a sharp influx in tourists from abroad, drawn by Meiji Shrine’s majestic forest and Takeshita-dōri, the shopping street renowned as the face of kawaii youth culture. Ahead of the games, Harajuku Station on the JR Yamanote Line, the stop nearest to the Yoyogi National Gymnasium, is undergoing a transformation. The new station building is set to open on March 21, with JR East saying the redevelopment will vastly improve commuter convenience and comfort. 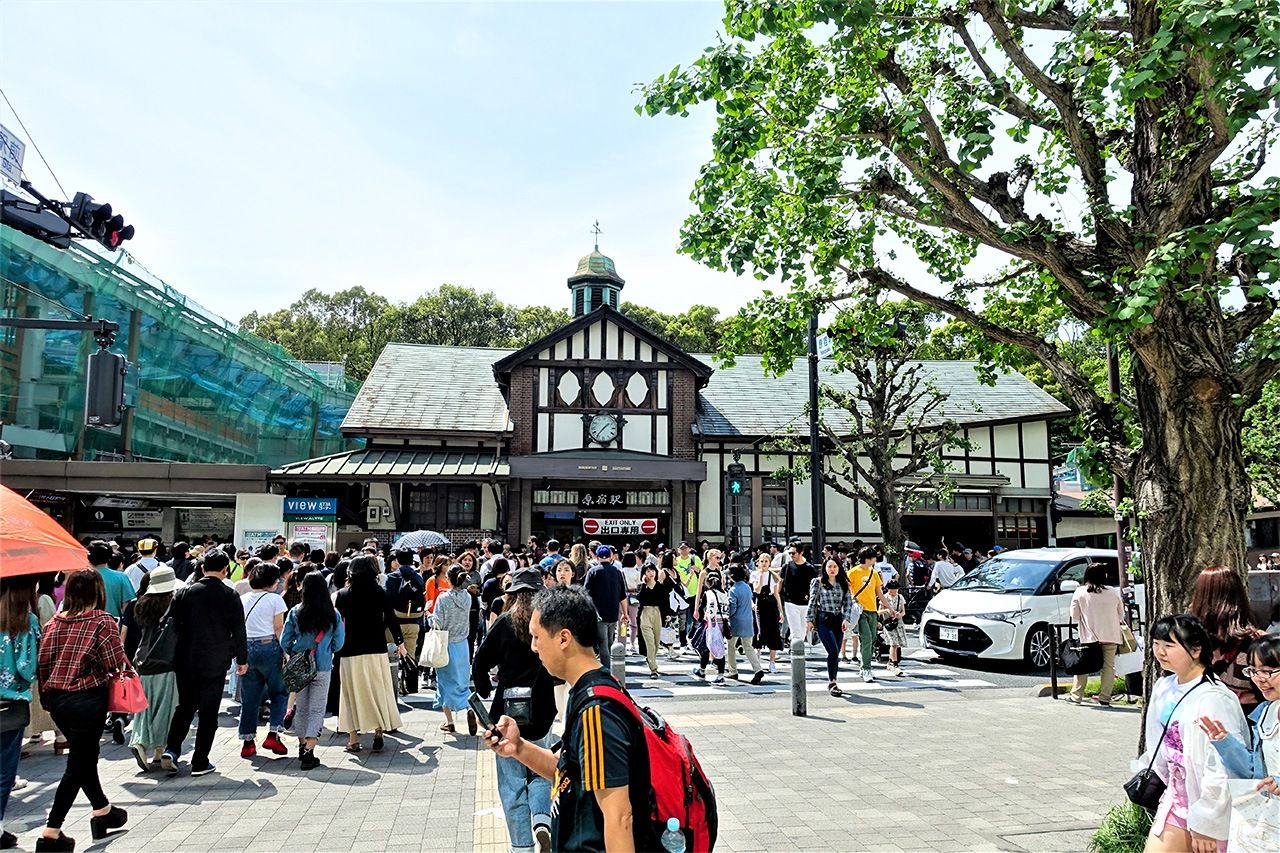 The present Harajuku Station building, a two-story structure known for its quaint European design and iconic spire, dates back to 1924. It is the oldest remaining wooden station in Tokyo. The new building will be constructed on the Meiji Shrine side of the current station and will straddle the rail lines. It will have a concourse three times larger than the present structure, boast double the restroom space, and house a convenience store and cafe.

An existing special platform on the Meiji Shrine side formerly only used for New Year visitors to the Meiji Shrine will be converted into a dedicated platform for trains traveling clockwise on the Yamanote Line, alleviating congestion in the station. An underground passage will connect the platform to Takeshita Exit on the station’s east side, and large elevators will be installed on each platform.

Sendagaya Station, close to the Japan National Stadium, is also undergoing renovation, with expansion of the ticket gates and concourse.

Tokyo Station, the capital’s gateway serving an average 900,000 passengers a day, is also undergoing a major revamp in readiness for 2020. Construction of a new commercial area, measuring 6,300 square meters and with some 70 shops, is underway and due to open before the Olympics.

The passage connecting the Marunouchi North Gate and Yaesu North Gate will be widened to 12 meters and a waiting area with an atrium will be added to the central underpass, which will also house a nursery and tax refund counter. Three elevators will be installed linking the underground, ground, and platform levels, greatly improving accessibility. 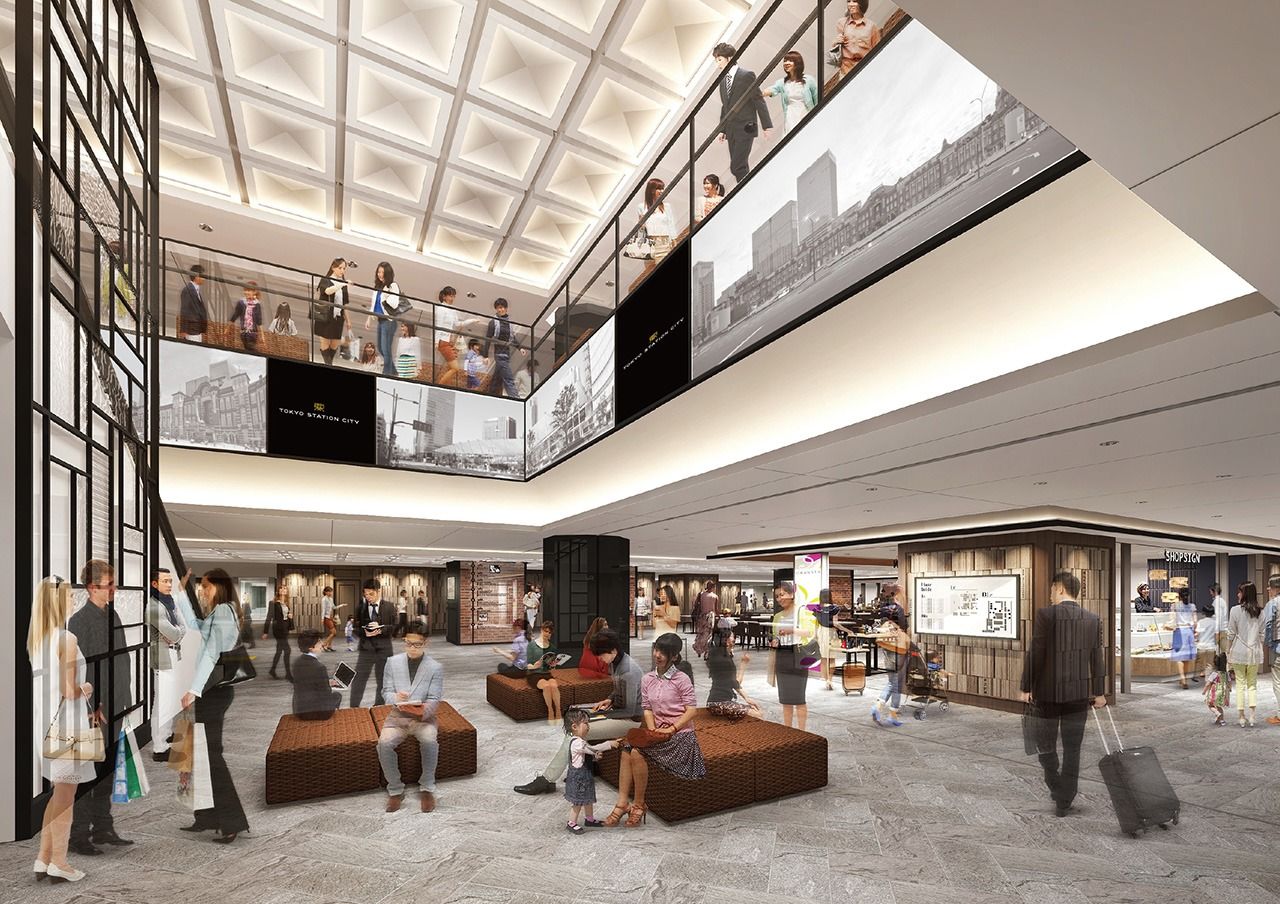 Since last fall, work has been wrapping up on a succession of new, innovative sports facilities featuring wood construction and eco-friendly designs that reflect Japanese culture and highlight the nation’s technical prowess.

The Japan National Stadium, the main venue for the Olympics and Paralympics, was completed in November 2019. Following an opening ceremony on December 21, the first official sporting event to be staged at the venue was the final of the Emperor's Cup, the JFA All-Japan Soccer Championship Tournament, on January 1.

The Ariake Gymnastics Center, the site of Olympic rhythmic and trampoline gymnastics events and Paralympic boccia competition, was completed in October 2019. Located near Ariake-Tennis-no-Mori Station on the New Transit Yurikamome Line, it hosted the Trampoline Gymnastics World Championships in November. 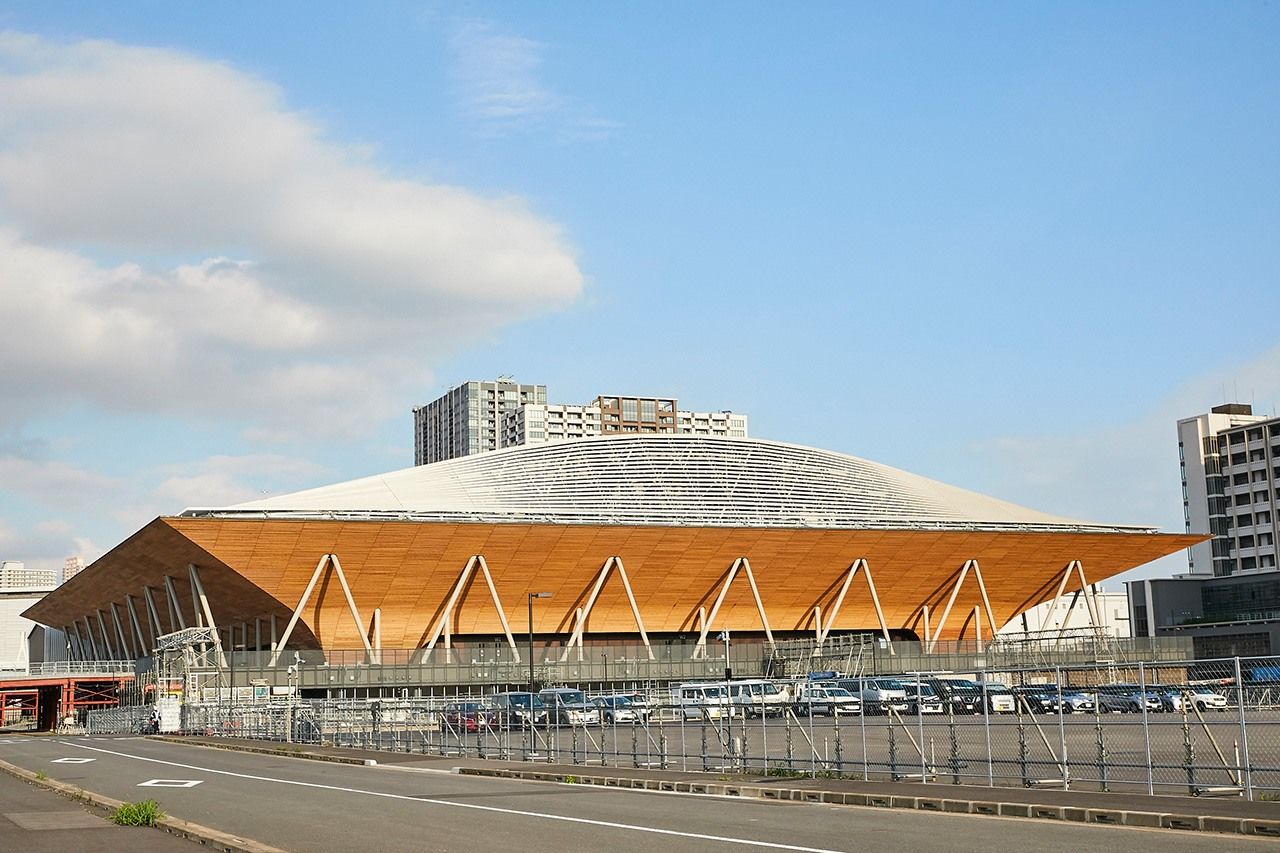 Built on the site of an old lumber yard, the new building evokes images of the wooden merchant ships that once plied the bay. The building’s walls and slender supporting pillars incorporate timber and appear, from a distance, to be suspended in mid-air. The center seats 12,000 spectators.

Some 2,300 cubic meters of Japanese-grown cedar and larch were used in the construction, the most of all the Olympic venues, imparting the venue with the warmth and scent of wood. The focal point of the center is its arching roof. Measuring approximately 90 meters by 120 meters, it is one of the largest timber roofs in the world. After the Olympics, the wooden seating will be removed and re-used and the building will serve as an exhibition facility. 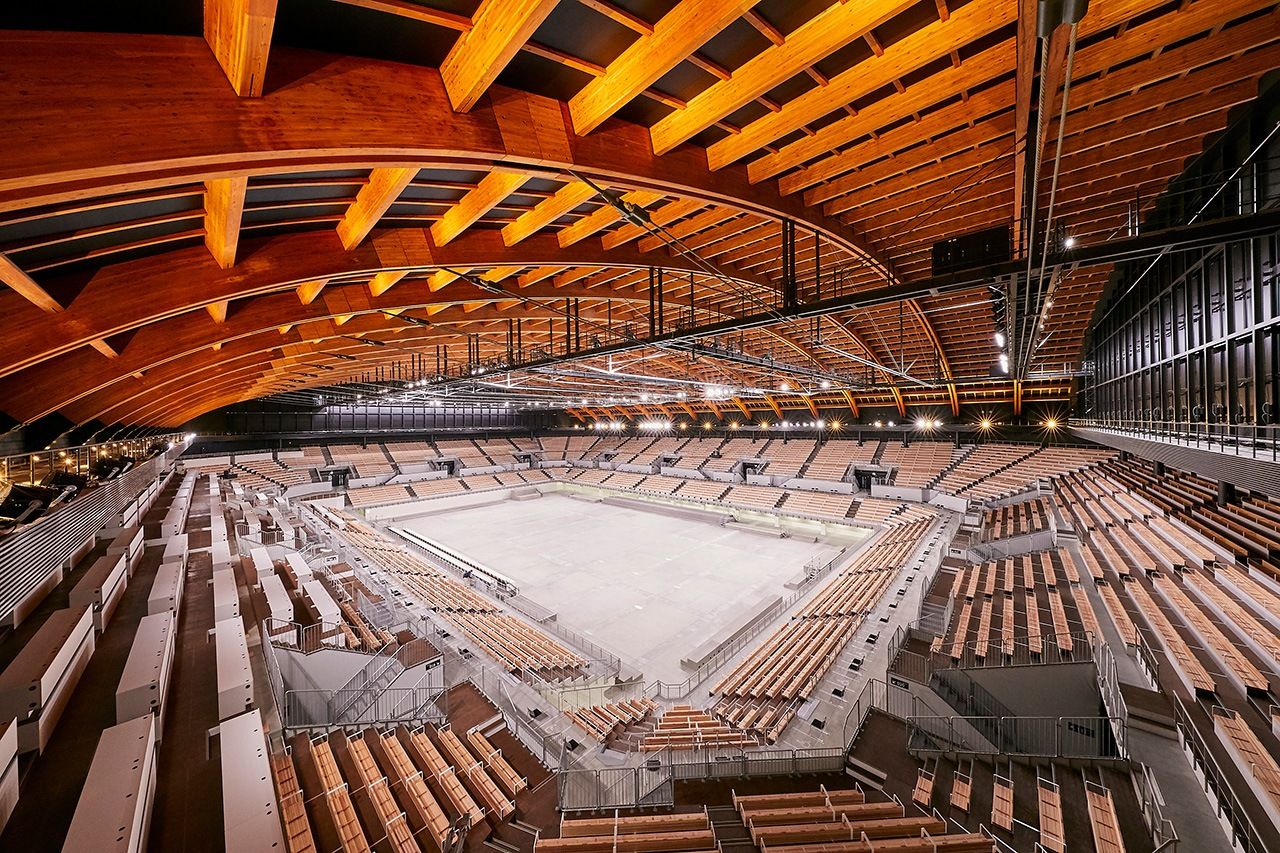 The Ariake Arena, completed December 9, will host Olympic volleyball and Paralympic wheelchair basketball. Also near Ariake-Tennis-no-Mori Station, the venue will have its grand opening on February 2. The five-story building has a capacity of 15,000 and features a variety of environmentally friendly design features.

The structure’s roof has a unique concave design to reduce the internal space, cutting air conditioning and lighting costs, and prevent sunlight from reflecting onto adjacent buildings like nearby high-rise apartment complexes. After the games, the venue is expected to be used for sporting events and concerts, with management rights to be sold to the private sector. 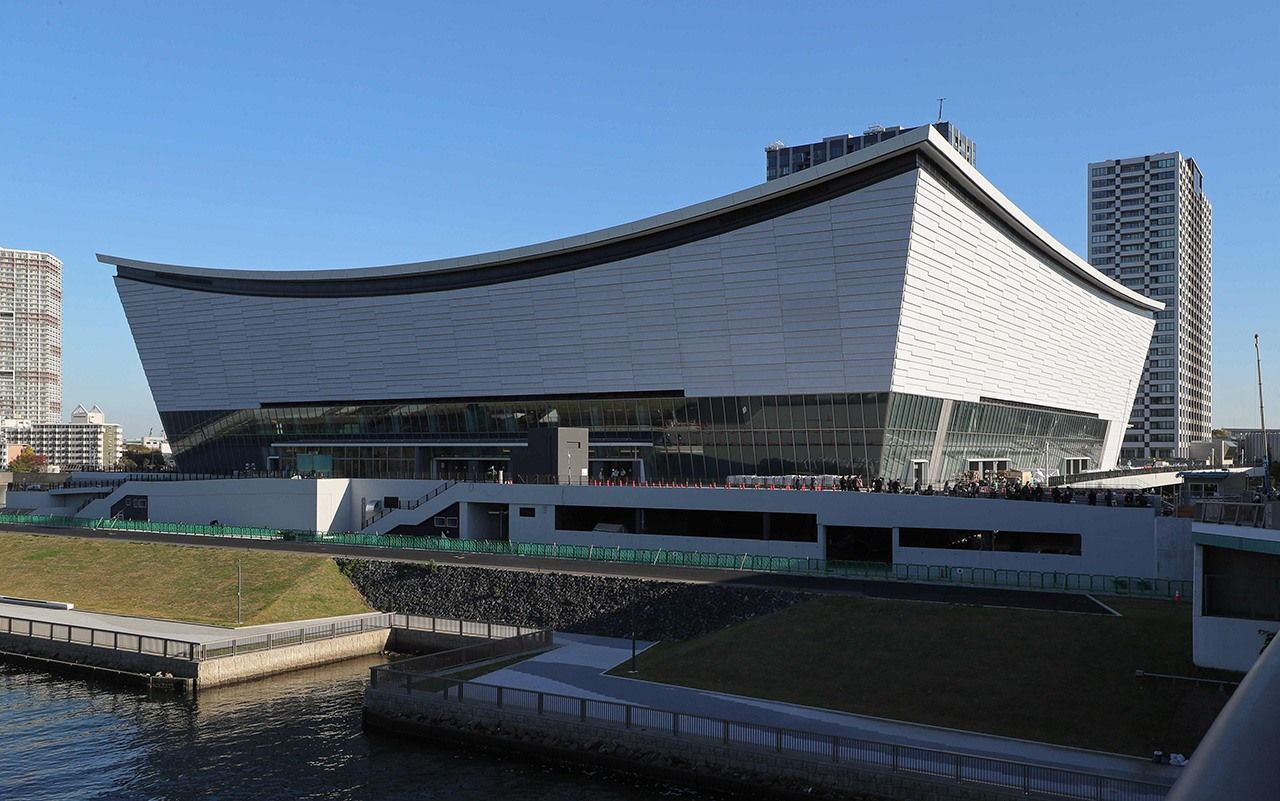 Preparations are underway for the July 14 opening of the Athletes’ Village, which will accommodate some 18,000 athletes and officials during the games.

The 44-hectare site is surrounded by water on three sides and is comprised of 21 buildings ranging from 14 to 18 floors, totaling some 3,800 apartments. Dining facilities will operate around the clock, supplying a maximum 45,000 meals daily. Other facilities will include a gymnasium, services center, bus stops, car parking, and public parks. 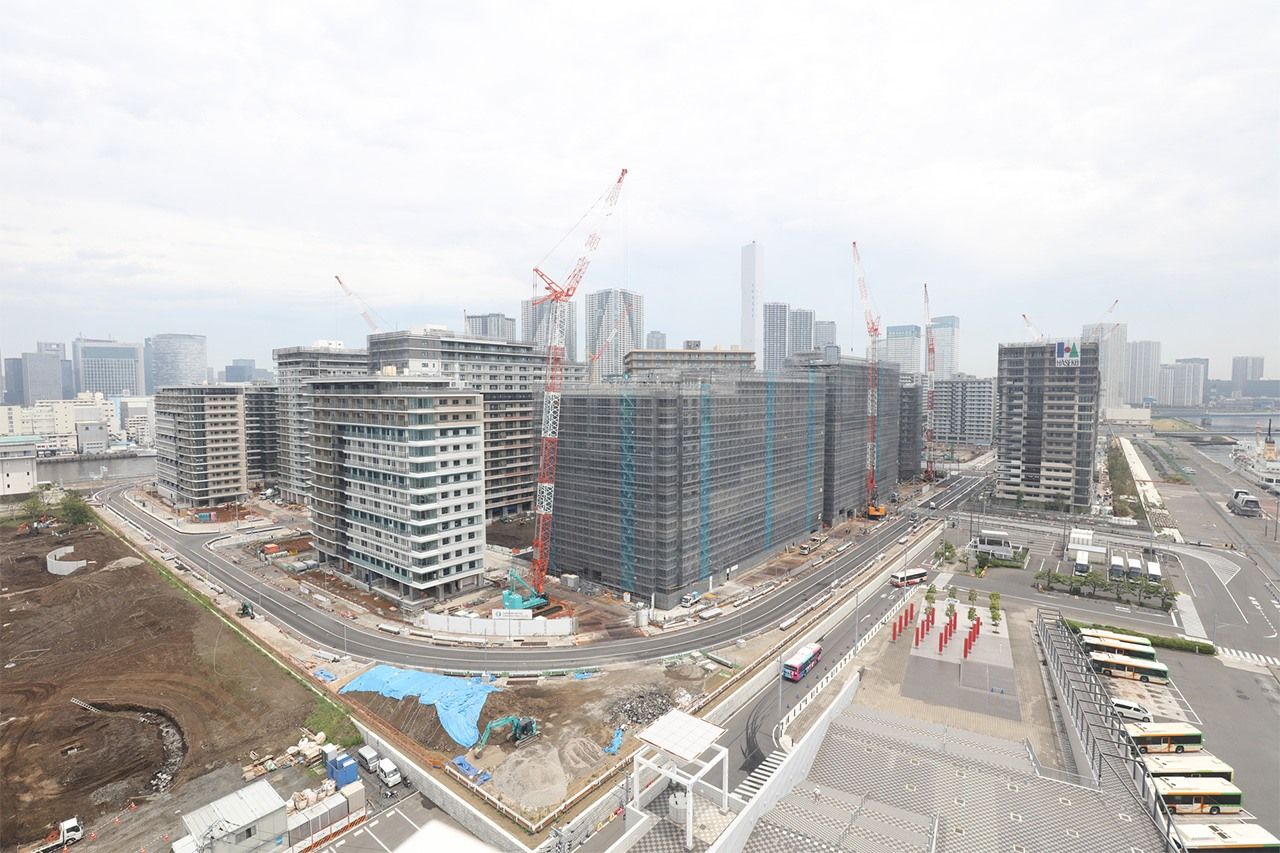 The site of the Athletes’ Village for the 1964 Olympics was transformed into Yoyogi Park. However, after Tokyo 2020, the athlete accommodations will become a residential development called Harumi Flag that will include two additional 50-story towers. The 5,600 or so apartments will be up for sale or rental, creating a new Tokyo suburb with around 12,000 residents.