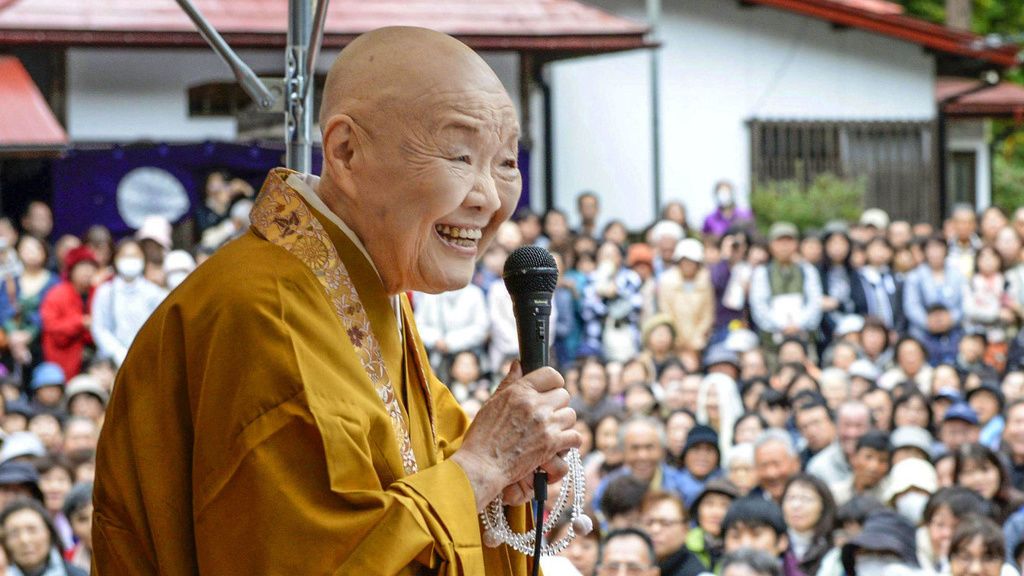 Culture Jul 11, 2022
The storied life of author and Buddhist nun Setouchi Jakuchō came to a close with her passing last year at the age of 99. As a popular novelist and outspoken figure, over her long career she was known for tackling difficult topics and for her political stances. A former lead editor at the Yomiuri Shimbun and Waseda University professor looks back at her 30 years covering Setouchi to consider the impact she had on Japanese society and modern literature.

Born in 1922, Setouchi Jakuchō was a contemporary of Japan’s so-called third generation of postwar writers that included Endō Shūsaku, with whom she enjoyed a close relationship. Over her long career, she won fans with her unflinching novels on provocative themes, essays, and regular appearances on television, which was a medium, like Endō, that she ardently embraced.

Setouchi, who published under her married name Setouchi Harumi until taking the tonsure in 1973, came to prominence in the 1960s. She was part of a proliferation of talented writers who defined the burgeoning print culture of the early postwar era, such as Kita Morio, Yoshiyuki Junnosuke, and Agawa Hiroyuki of “third-generation” fame along with Shiba Ryōtarō, Itsuki Hiroyuki, Tanabe Seiko, and Yamasaki Toyoko. These and other writers won broad appeal producing a steady stream of outstanding works serialized in newspapers and magazines, which then went on to dominate best-seller lists when published in book form. Their novels and essays provided readers with an escape from the increasingly hectic pace of life as Japan climbed back economically.

Japan enjoyed an unprecedented period of prosperity with the start of the economic bubble in the late 1980s. The ranks of contemporary Japanese writers had diversified, but Setouchi remained among the prominent names of the day. Japanese literature began garnering new international attention, with authors like Murakami Haruki and Yoshimoto Banana winning fans overseas with translations of their works, a trend punctuated by Ōe Kenzaburō’s winning of the Nobel Prize in Literature in 1994.

The bursting of the bubble economy in the mid-1990s, however, brought the wave of prosperity the publishing industry had been riding crashing down. Magazines and other publishers were slow to respond to the spread of the internet and saw their readership and bottom lines decline precipitously. The industry fell on hard times, and it is only recently that major publishers have started to get back on track by offering manga and other lucrative content in digital formats.

Through the turmoil, Setouchi’s popularity never flagged, which can be attributed to her insatiable interest and abundant talent in describing the world around her. An example of this inquisitiveness is her series Kien mandara (A Mandala of Coincidences), which ran in the Nihon Keizai Shimbun from 2007 to 2011. Starting with author Shimazaki Tōson, whom she knew briefly while a student at a women’s university in Tokyo, Setouchi drew on conversations and other material to sketch portraits of 135 cultural figures, including people as diverse as writer Tanizaki Jun’ichirō, literary critic Kobayashi Hideo, and politician Tanaka Kakuei. The engaging essays are a testament to the curiosity, drive, and good fortune that sustained the writer over the seven decades of her career.

I feel Setouchi’s longevity as an author owes much to her relationships with other accomplished women writers of her day. She shared friendships with and drew inspiration from predecessors like Enchi Fumiko and Uno Chiyo along with contemporaries such as Kōno Taeko and Ōba Minako. Setouchi held Enchi and Uno in especially high esteem and spoke of how their writings had encouraged her immensely.

Also counted among this group are Ariyoshi Sawako and Sono Ayako, who like Setouchi started their careers in the 1950s but are best known for their serialized novels tackling environmental problems and issues with the medical system that were coming to the fore in the 1970s. For whatever reason, though, the literary world of the day overlooked Ariyoshi and Sono, passing them over for awards, whereas it embraced the writings of Enchi, who had a deep understanding of classical literature, and the flawless novels of Uno, including them in the canon of modern Japanese literature.

The year 1987 marked a watershed for the Japanese literary world with the inclusion of Ōba and Kōno on the selection committee for the prestigious Akutagawa Prize. At long last, women were part of the inner sanctum of Japanese literature, enabling the works of female writers to be considered on an equal footing as their male counterparts. Setouchi had followed a similar path as Kōno early in her career, developing her writing talents penning pieces for dōjinshi, amateur, self-published magazines. Although her works were typically thought to be popular fiction, she steadily shifted her focus to literary publications that dealt with junbungaku, “pure” literature valued for its artistic rather than commercial appeal. At the same time, she mirrored Ōba with works that bridged the divide between Japan’s classical and modern ages.

Born in the Taishō era (1912–26), Setouchi was at ease with archaic Japanese texts. She honed her research skills and biographical novel style with works on Meiji-era figures like pioneering woman writer Higuchi Ichiyō and activist journalist Kanno Sugako, who was hanged for high treason. She did not limit herself to female figures, though. In the 1980s, her books on the lives of eminent Buddhist monks Saigyō, Ryōkan, and Ippen Shōnin drew male readers with their distinctive take on history and religion.

Following on from these, Setouchi introduced the Tale of Genji to a new generation with her modern translation of the classic, releasing the tenth and final volume in 1998. The series, which has sold over 2 million copies, reflected the latest scholarly study of the work at the time. Eloquently rendered by Setouchi into modern Japanese, it surpassed earlier translations by Yosano Akiko and Tanizaki, becoming the definitive version of Genji.

At the age of 51, Setouchi shocked the nation when she became a nun of the Tendai sect of Buddhism. Taking the name Jakuchō, she grew ever more active as a religious figure. When readers sought her guidance on personal issues like love, divorce, family, and bereavement, she did her best to respond to each in kind. She also used her status to challenge social and political norms, including writing essays that actively encouraged women and young people to be independent. Although deeply motivated by the desire to transform society, she was also driven by intense remorse for having left her husband and four-year-old child when she ran off with another man shortly after the war.

Setouchi resided at the Jaku-an in the Sagano neighborhood of Kyoto. In 1987, she became the head priest of Tendaiji, a small temple in the town of Jōbōji in northern Iwate Prefecture, and would travel there regularly to give sermons. I accompanied her on several of these trips and was always struck by the army of buses bringing listeners from around the country.

Setouchi kept a busy schedule that took her to every corner of Japan. Even into her mid-eighties, she bubbled with energy and had a spring in her step. The vitality of her sermons made a lasting impression on me. Hunched forward, her voice resonating, she stirred listeners, most of whom were loyal fans, impressing on them the impermanence of life while also expounding on politics and international affairs. Her standpoint was always that of a Buddhist who cherished the lives and spirits of people above all else. Much as Endō Shūsaku can be considered to represent Catholic authors in Japan, the novels of Setouchi should be regarded as typifying modern Buddhist spirituality.

Setouchi’s identity as a Buddhist was at the core of everything she did. It was central to her decision to go on a hunger strike in 1991 to protest the Gulf War. It was also what motivated her to raise some ¥13 million in donations, including her own money, to buy medical supplies for victims of the conflict. She delivered the supplies personally to Baghdad in April of that year, and in a rare act of solidarity with an author, a literary editor from publisher Kodansha accompanied her on the trip.

When the United States invaded Afghanistan following the September 11, 2001, terrorist attacks, she staged another hunger strike to call for an end to the conflict. Through her activities she came to know Nakamura Tetsu, a Japanese physician doing humanitarian work in the country, maintaining a close friendship with him until his tragic death at the hands of extremists.

A decade later, Setouchi toured the Tōhoku region in the wake of the 2011 Great East Japan Earthquake to help soothe the pain of victims and to pray for the souls of those killed in the disaster. During the journey, she sat down for a memorable dialogue arranged by major daily Yomiuri Shimbun with eminent scholar Donald Keene at the World Heritage site Chūsonji in Iwate Prefecture. Although Setouchi and Keene were nearly 90 years old and used wheelchairs to get around, the pair, both recipients of the prestigious Order of Culture, burst with energy as they spoke, standing for photos and flashing smiles in a moving conversation that offered reassurance to people suffering under the strains of life.

Active to the End

Whether it was publishing her cellphone novel Pāpuru (Purple) or posting on her Instagram account—she was an early user of the platform—Setouchi continued writing up unto the end. “Living for me is writing,” she wrote in a November 2021 promotional pamphlet for a newly released five-volume set compiling her writings since 2000, an addition to her previously published 25-volume complete works. As she approached 100, she recognized that her time was near.

Over her seven decades as a writer, she had watched the Japanese literary world transform. She had gone from being categorized as an author of “women’s fiction” to merely being a woman writer, eventually trading her sex altogether for the robes of a nun. She recognized that the Japanese literary world had entered a new era, though, one in which authors were no longer defined by the binary gender labels that had dogged her over her career. In a final request before she died, she asked that fellow novelists and friends Kawakami Hiromi, Hirano Keiichirō, Tanaka Shin’ya, Itō Hiromi, and Takahashi Gen’ichirō provide commentaries for the new collection. This was not a sentimental choice, but one acknowledging the leading novelists of this new generation.

As an heir to Japan’s long literary legacy stretching back to the Heian period (794–1185), Setouchi breathed new life into the tradition even as she surely grappled with contradictions born from being an author and religious person. She drew strength from this intense conflict, though, giving her works depth and allure. Having nearly reached 100, she stands as an example of what humans can achieve in this age of longevity.

Newcomers to Setouchi may be intimidated by the sheer volume of her works. Among her more than 400, three stand out in my mind. First is her Noma Literary Prize winning novel Basho (trans. by Liza Dalby as Places), a work of autobiographical fiction Setouchi wrote in her late seventies that looks back over the events of her early life. The second is the 1966 biographical novel Kanako Ryōran (Kanako Abloom) about Okamoto Kanako, a novelist, poet, and the mother of famed artist Okamoto Tarō. Finally, there is the 1966 Bi wa Ranchō ni ari: Itō Noe to Ōsugi Sakae (Beauty in Chaos: Itō Noe and Ōsugi Sakae), a realistic account of the relationship between Itō, the last editor of women’s liberation magazine Seitō (Bluestocking), and prominent Taishō-era anarchist Ōsugi. Although views on love and ethics slowly change with each generation, these works remain timeless depictions of individuals who lived life in full.

(Originally published in Japanese. Banner photo: Setouchi Jakuchō during a sermon at Tendaiji in Ninohe, Iwate Prefecture, in October, 2015. © Kyōdō.)