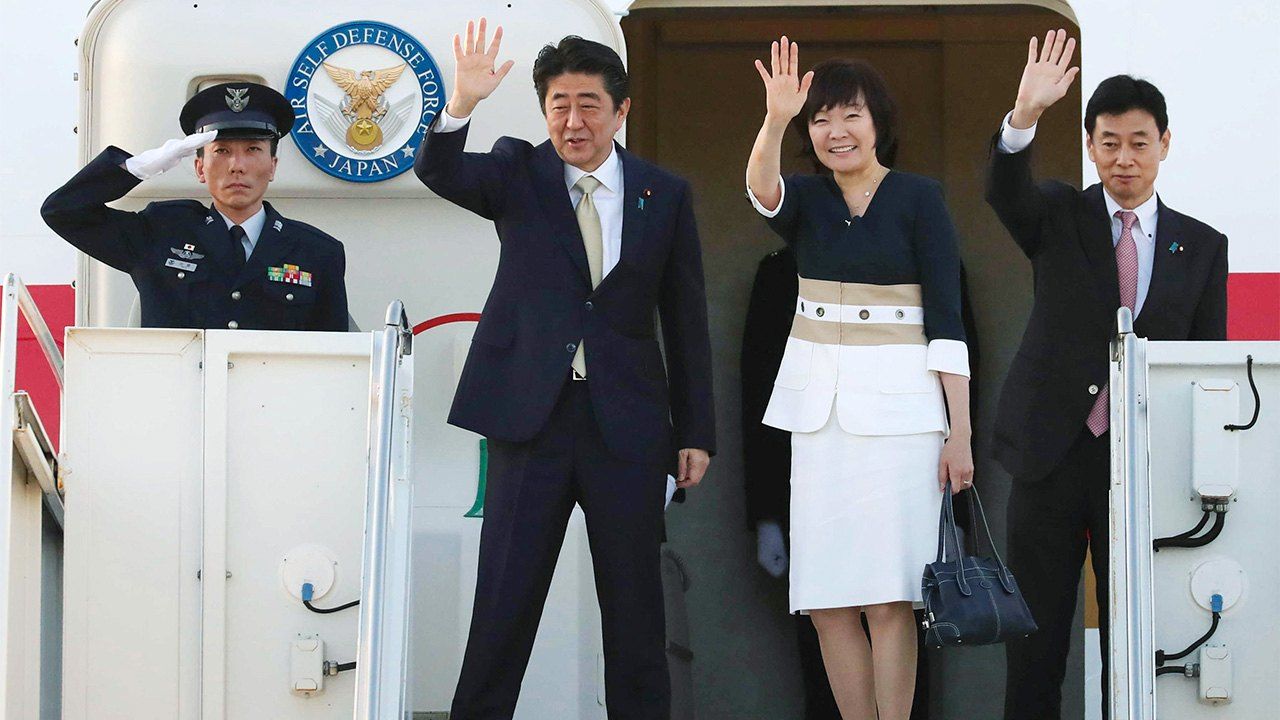 Memories of Abe Shinzō: The Man Who Reshaped Japan

The assassination of Prime Minister Abe Shinzō on July 8, 2022, brought a decade of renewed political activity to an abrupt end. The Liberal Democratic Party leadership election of September 2012 saw Abe, who had been dismissed as finished following his first, ill-fated 2006–7 administration, complete a miraculous recovery. Three months later, he was prime minister, after heading the LDP in a landslide election victory against the incumbent Democratic Party of Japan. He led the country for an unprecedented seven years and eight months, and remained a major force in the political world during the premierships of Suga Yoshihide and Kishida Fumio.

For better or worse, this was a decade in which Japan had to confront both a deteriorating security environment and a decline in national power. One might also say that the crisis Japan faced over its postwar identity in this era allowed Abe to establish his dominant position.

Like a powerful magnet attracting allies and repelling enemies, Abe was rare among Japanese prime ministers in drawing intense support and opposition. I heard him recall happily how Watanabe Tsuneo, editor-in-chief of the Yomiuri Shimbun, had described him as the most aggressive prime minister since Yoshida Shigeru.

He was referring to his February 2019 statement at the LDP annual convention ahead of that year’s upper house election. Abe’s warning that “we cannot return to the nightmare of the DPJ administration” sparked furious reactions among opposition parties and reminded some historians of Yoshida’s dismissive description of the left-leaning University of Tokyo President Nanbara Shigeru as distorting scholarship to pander to society.

Abe was an overwhelming power in the Diet and his contempt for the fragmented opposition was criticized as immature and dismissive. Even within the LDP, moderates were cool to Abe’s inflammatory rhetoric.

Yet, this was consistent with Abe’s combative stance toward the left. It is similar to how his irritation at a crowd’s banner reading “Abe, quit!” during the Tokyo prefectural election in July 2017 led him to swear that he would not be defeated by such people. 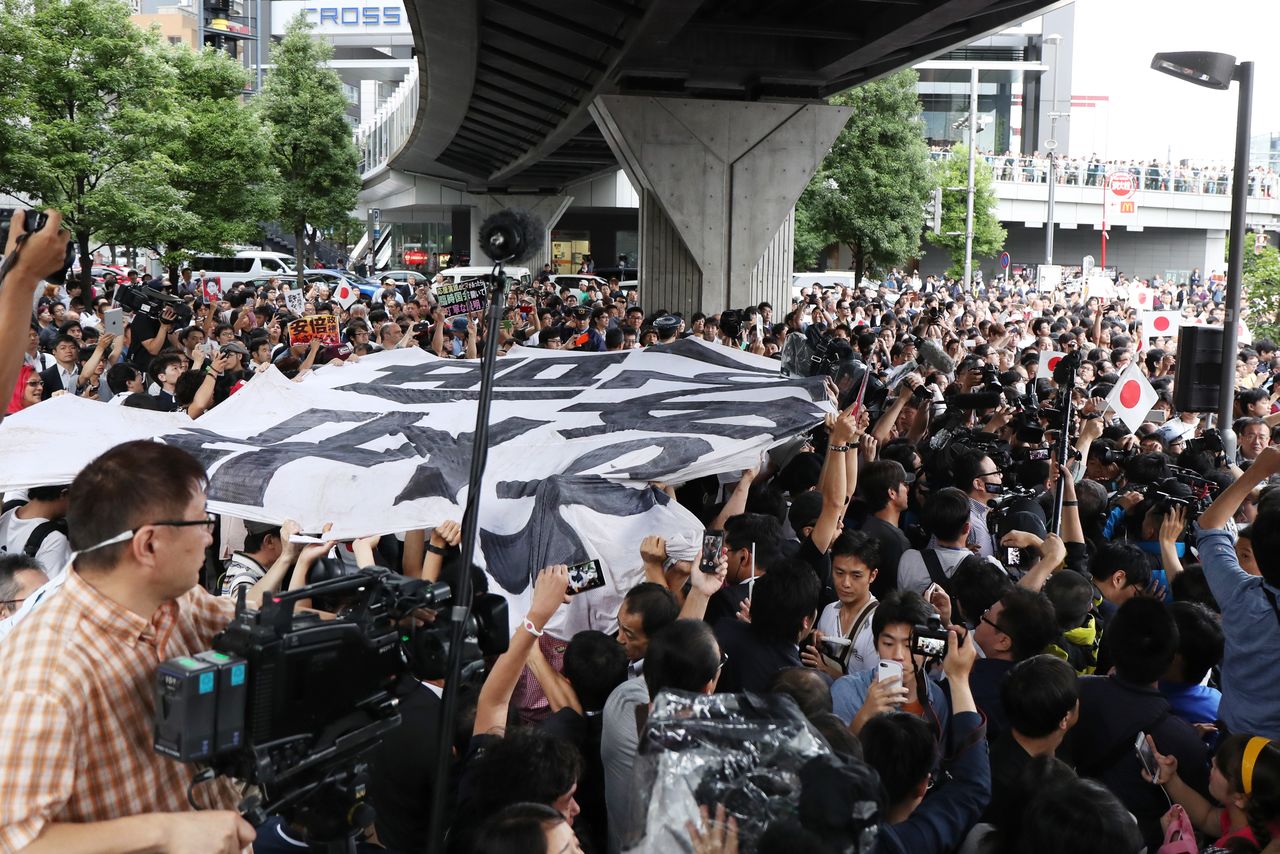 A crowd holds a banner reading “Abe, quit!” as Prime Minister Abe Shinzō gives a speech during the Tokyo prefectural election in Akihabara on July 1, 2017. (© Jiji)

In February 2022, I asked Abe what he had been aiming to do with his “nightmare” statement. The previous month, a new book by nine academics had considered his relentless attacks on opposition parties.

“I was leading the governing party ahead of [electoral] battle,” Abe responded. “Elections are about making comparisons to decide who’s better. In battle, the leader has to cross swords with opponents. Some think that this is dirty work that should be left to others, but as nobody else was right for the task, I marched forward myself.”

This showed some dissatisfaction with Prime Minister Kishida, as Abe went on to make plain.

“You have to rouse the troops at election time. But Kishida isn’t really that kind of character. A lot of lawmakers ask why he isn’t more confrontational toward the Constitutional Democratic Party of Japan. Criticizing the opposition is the way to create some excitement.”

One can imagine that Abe’s discontent went beyond simply Kishida’s stance toward the opposition to encompass his entire way of governing. Abe continually offered his opinions to Kishida on subjects from finance and national security to the selection of the vice-minister of defense. Both men became lawmakers in 1993, and Abe seems to have been insisting on his superior position in the pecking order.

The two had a fundamental difference in the structural support for their administrations, with Abe’s hard power approach attracting men and young voters, while Kishida’s soft power won more backing from women and seniors.

If Abe had not been shot, one key task for Kishida after the upper house election would have been staving off his interventions. This relates to the longstanding tensions between Kishida’s Kōchikai faction and the Seiwakai faction, headed by Abe until his death.

Abe’s grandfather was Prime Minister Kishi Nobusuke, and his father Abe Shintarō was foreign minister. Raised in this political family, he graduated from Seikei University and started working at Kobe Steel. A former colleague who worked with him in Kakogawa, Hyōgo Prefecture, recalled him as an agreeable young man who did not drink, and so was willing to be a driver for drinking parties. He was likely a typically good-natured, but sheltered, youth from a wealthy background.

Abe Kan, two years older than Kishi, graduated from Tokyo Imperial University and served as a village mayor in Yamaguchi Prefecture before being twice elected to the House of Representatives. He expressed opposition to Tōjō Hideki’s wartime cabinet and remained a rebellious voice in the one-party state.

In naming his son Abe Shintarō, Kan took the kanji 晋 (shin) from the name of Takasugi Shinsaku, a local hero who had been active in the years leading up to the Meiji Restoration; the kanji also appears in Abe Shinzō’s name. Abe Shintarō graduated from the University of Tokyo and worked as a political reporter at the Mainichi Shimbun before entering the political fray himself. Yet Abe rarely spoke fondly of his paternal grandfather or the Mainichi, while he was notably eloquent in discussing Kishi.

This is due to the influence of his mother Yōko. As Shintarō was often absent, Yōko would talk at length to Abe on Kishi’s political prowess. Now 94, she appeared regularly until a few years ago at a May meeting commemorating her husband’s passing, conveying a severe, straight-backed image as Kishi’s daughter.

Abe’s derision of the Constitution as shameful and his rejection of a “masochistic view of history” that reflected on the country’s militaristic past clearly derived from Kishi’s right-wing ideology.

While Abe declared himself to be a conservative, though, he also favored a “big government” that pushed public spending and women’s active involvement in the workplace. His seemingly liberal policies are reminiscent of the state capitalism Kishi implemented in Manchuria.

The Abe administration was the most rightward-leaning government of the postwar era, and it drew figures and media who would have formerly been peripheral to the LDP toward its center. Prominent examples include Sakurai Yoshiko, a commentator affiliated to the Nippon Kaigi group, and the author Hyakuta Naoki.

With the strength of LDP numbers in the Diet and prime ministerial authority acquired through reforms, Abe saw his power as there to be used, pursuing legislation that split public opinion and controlling civil service appointments.

This is how Abe gained his high-handed reputation, but he showed a different side of his personality in small groups. In such situations, he could delight through fascinating conversation and an eager-to-please demeanor.

For example, he had this anecdote about a trip to Britain in 2016. “I asked David Cameron to take me to Chequers [the country house of the UK prime minister]. The register showed that the last Japanese prime minister to go there was Tanaka Kakuei, forty-three years earlier. And the only Japanese visitor before that was Emperor Shōwa in 1921, when he was still crown prince.”

His conversational expertise served him well in forming cordial relations with former US President Donald Trump. In diplomacy between heads of state, individual abilities are still crucial. 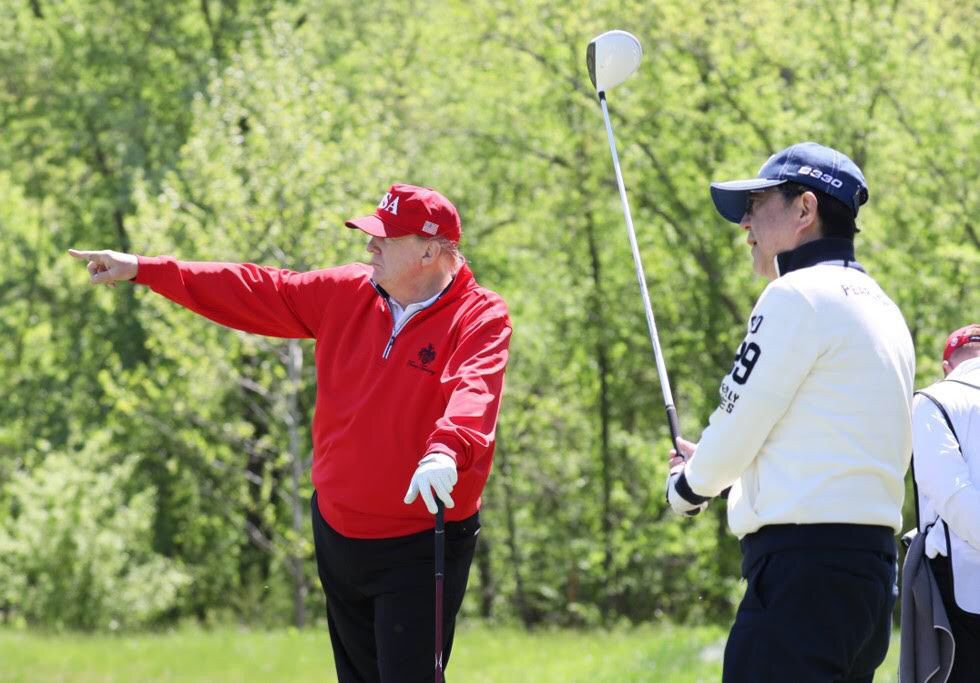 Ahead of this year’s anniversary of the Great East Japan Earthquake on March 11, Abe uploaded to YouTube his piano performance of “Hana wa saku” (Flowers Will Bloom), a song supporting recovery in areas affected by the disaster. I will not forget him saying, “I played it because I was asked to, but I hadn’t played the piano since the second grade. I’m not nervous giving speeches, but I was incredibly nervous during the performance. I did a lot of practice for two months.”

Abe had the painful memory of being roundly criticized for a video showing him relaxing at home with his dog, encouraging people not to go out during the COVID-19 pandemic. “The piano performance has more than 2 million views,” he said cheerfully.

At his wake on July 11 at the Tokyo temple Zōjōji, a video of him playing the piano with his wife Akie was shown repeatedly. 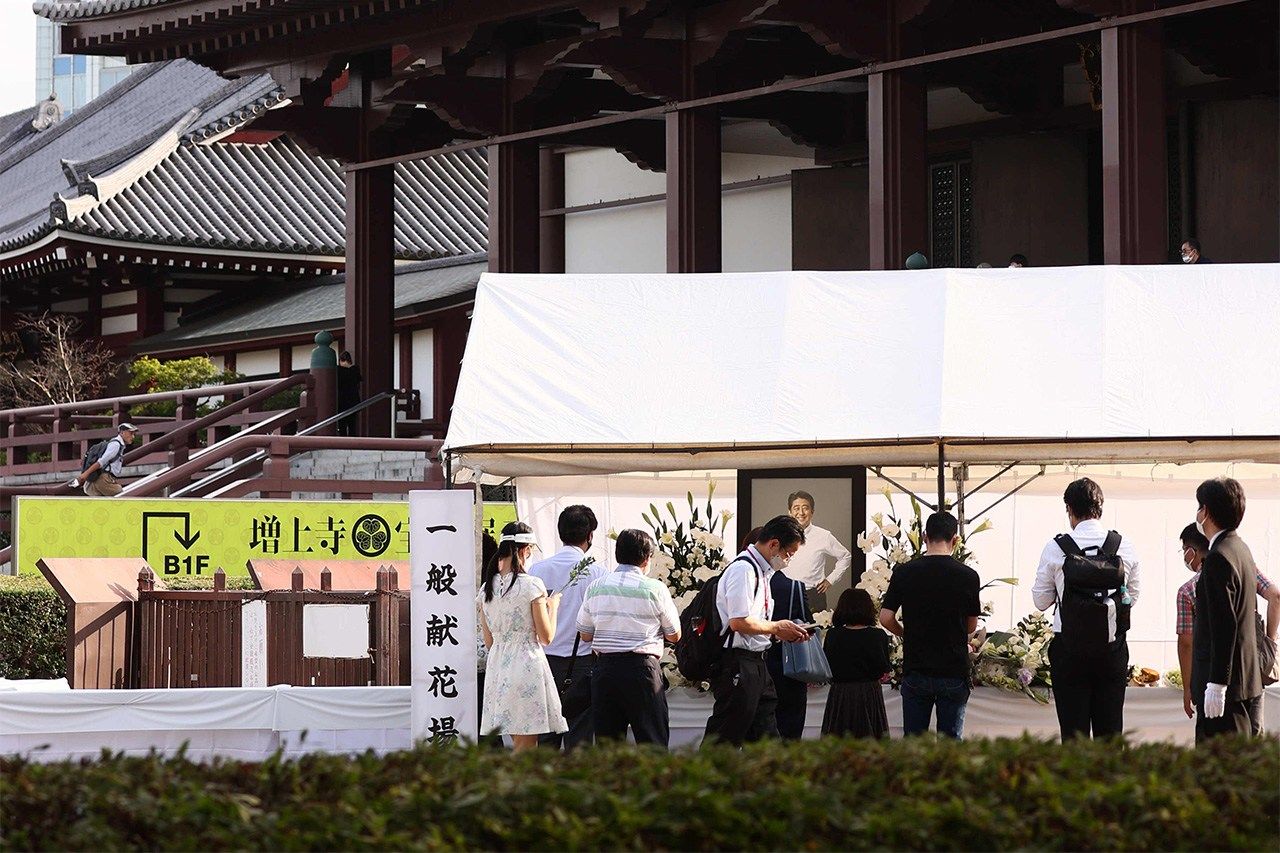 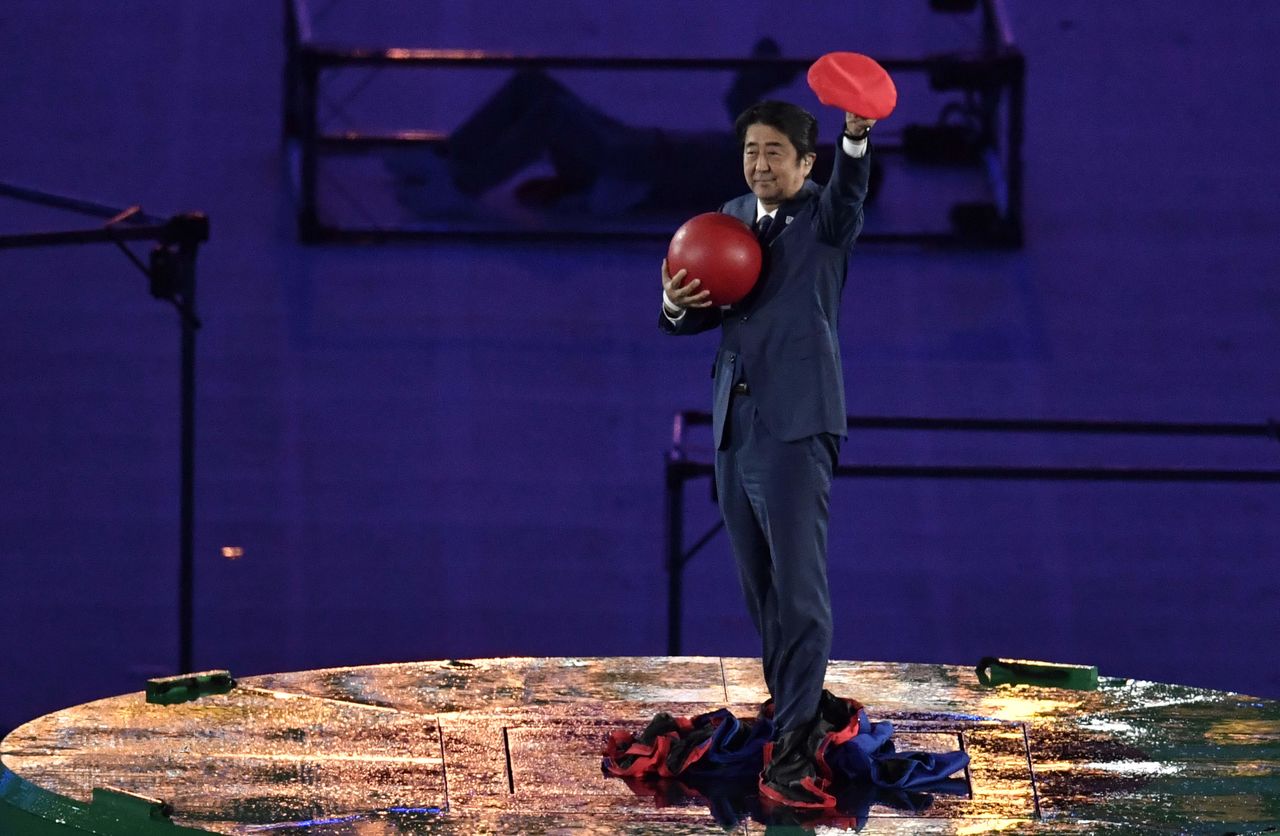 Prime Minister Abe Shinzō appears as Mario at the closing ceremony for the Rio de Janeiro Olympics on August 21, 2016. (© AFP)

(Originally published in Japanese on July 11, 2022. Banner photo: Prime Minister Abe Shinzō and his wife Akie in Palm Beach on April 19, 2018, just before returning from a visit to the United States. © Jiji.)