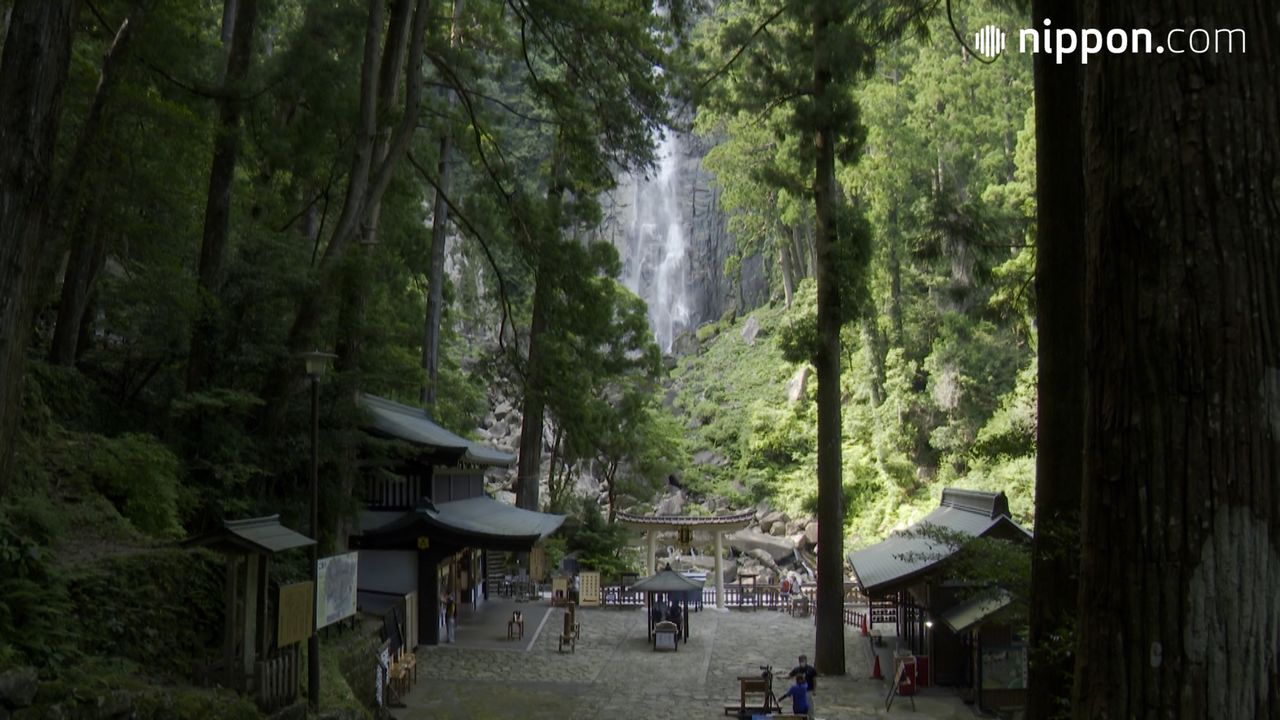 From its source in a primeval forest, the Nachi River becomes a torrent that drops straight down a sheer rock face, its spray evoking a mystical atmosphere. According to early classical history texts, Ōanamuchi-no-mikoto is the deity worshipped here, at Nachi Waterfall, which is itself an object of veneration.

Japan’s mythical first emperor Jinmu supposedly came upon Nachi Waterfall while on his way to subdue Yamato (eastern Japan), and a belief developed that anyone wet by the waterfall’s spray would enjoy good health and a long life. A white torii gate stands in front of the waterfall. At the top, a shimenawa rice straw rope with hanging paper streamers denotes that this is a sacred area, but there is no shrine building here. Instead, a building associated with the waterfall is located on the grounds of Nachi Kumano Taisha shrine, around 750 meters to the south; the shrine is said to be sited here because of the presence of the sacred cascade.

Nachi Waterfall, a popular stop for visitors to southern Wakayama Prefecture, is reputed to have supernatural powers. Together with Kumano Taisha shrine, it is part of the Sites and Pilgrimage Routes in the Kii Mountain Range (Nara, Wakayama, and Mie) World Heritage designated by UNESCO in 2004. Because of this, it has also stimulated interest among foreign visitors.

One of Japan’s Three Famous Waterfalls, Nachi Waterfall splits into three streams across a span of 13 meters. Its waters drop straight down from a height of 133 meters, making it Japan’s waterfall with the tallest uninterrupted drop. With water flowing at the rate of 1 ton per second, the torrent looks powerful enough to erode the rocky cliff face. Many visitors pay a small fee to worship at a site adjacent to the falls.

(Originally published in Japanese. Created in cooperation with ZTV.)