Society Oct 1, 2019
Typhoon Faxai brought devastating winds to Chiba Prefecture and rugby fever swept the nation as the World Cup tournament kicked off. A look back at Japan's top news stories for September 2019.

An eight-car train on the Keikyū Line collides with a truck at a level crossing in Yokohama and derails. The truck driver is killed and 35 people on the train are injured. 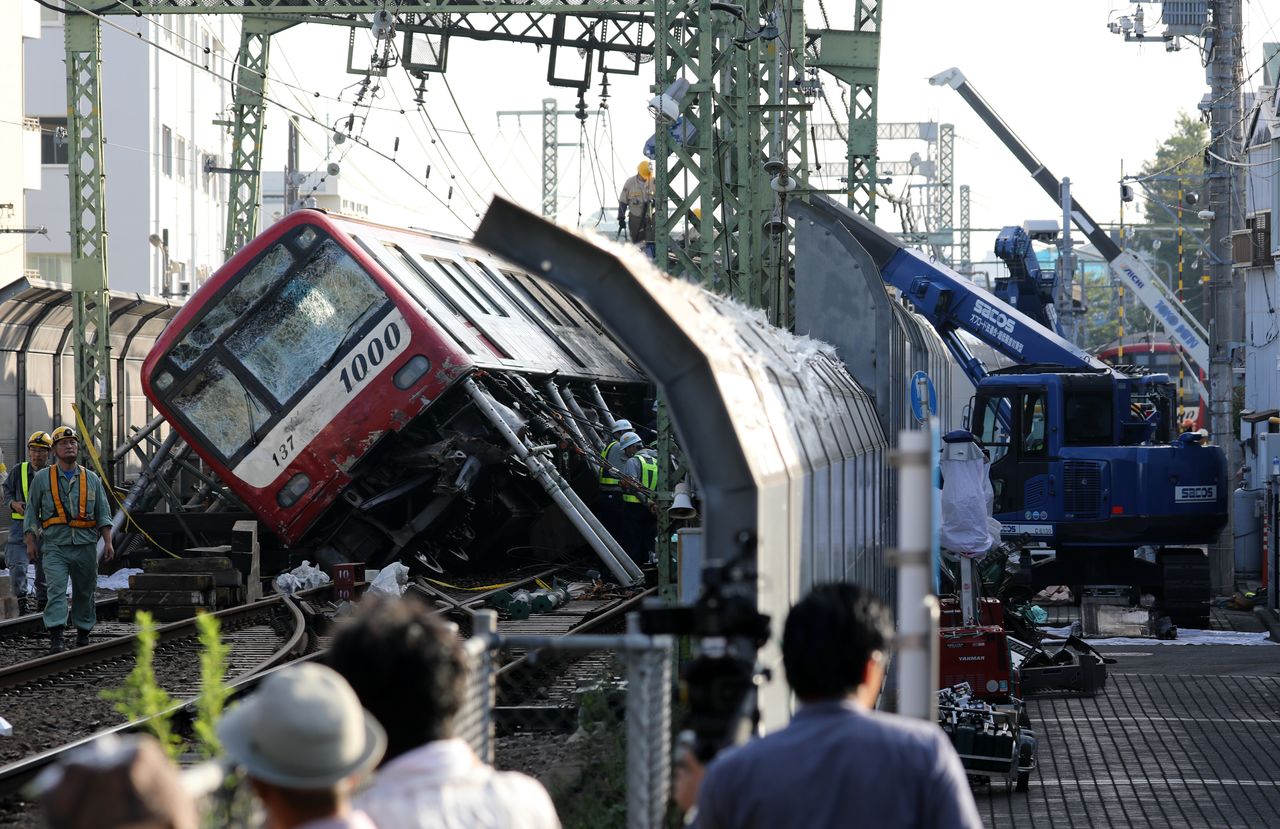 Equipment is brought in on September 6, 2019, to clear the line where the crash occurred in Yokohama. (© Jiji)

Prime Minister Abe Shinzō meets Russian President Vladimir Putin for talks in Vladivostok. The two leaders agree to continue negotiations over the disputed Northern Territories, but there is no concrete progress.

The Ministry of Finance announces that general-account budget requests for fiscal 2020 have reached a record high of ¥105.0 trillion, up ¥3.5 trillion (3.5%) from the initial budget for fiscal 2019. The main cause is ballooning social security expenditures due to the aging of the population.

The Immigration Services Agency and Ministry of Health, Labor, and Welfare impose a business improvement order on Hitachi for violations of the law governing treatment of technical interns after it was found that the company made its interns perform unauthorized duties.

Empress Emerita Michiko successfully undergoes surgery at the University of Tokyo Hospital to remove cancer in her left breast. She is discharged on September 10.

Typhoon Faxai makes landfall near the city of Chiba in Chiba Prefecture. Record-breaking winds reaching a maximum of 57.5 meters per second are registered in the city. From the early morning, many train services are suspended, affecting some 2.8 million commuters. More than 900,000 homes in Chiba and Kanagawa Prefectures suffer power cuts, with more than two weeks required for total restoration of power in Chiba. 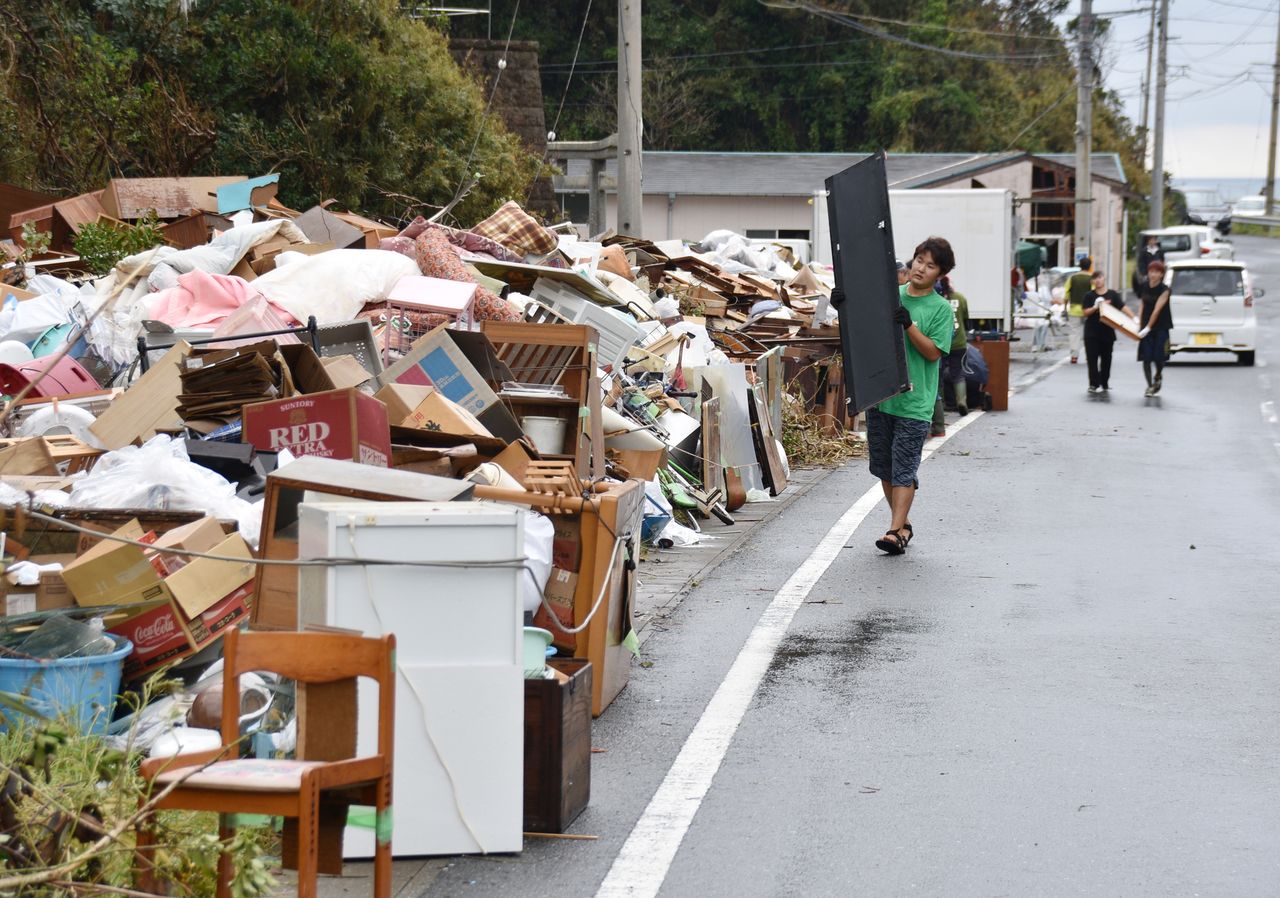 Residents gather debris and other rubbish for collection in Kyonan, Chiba Prefecture, on September 16, 2019. (© Jiji) 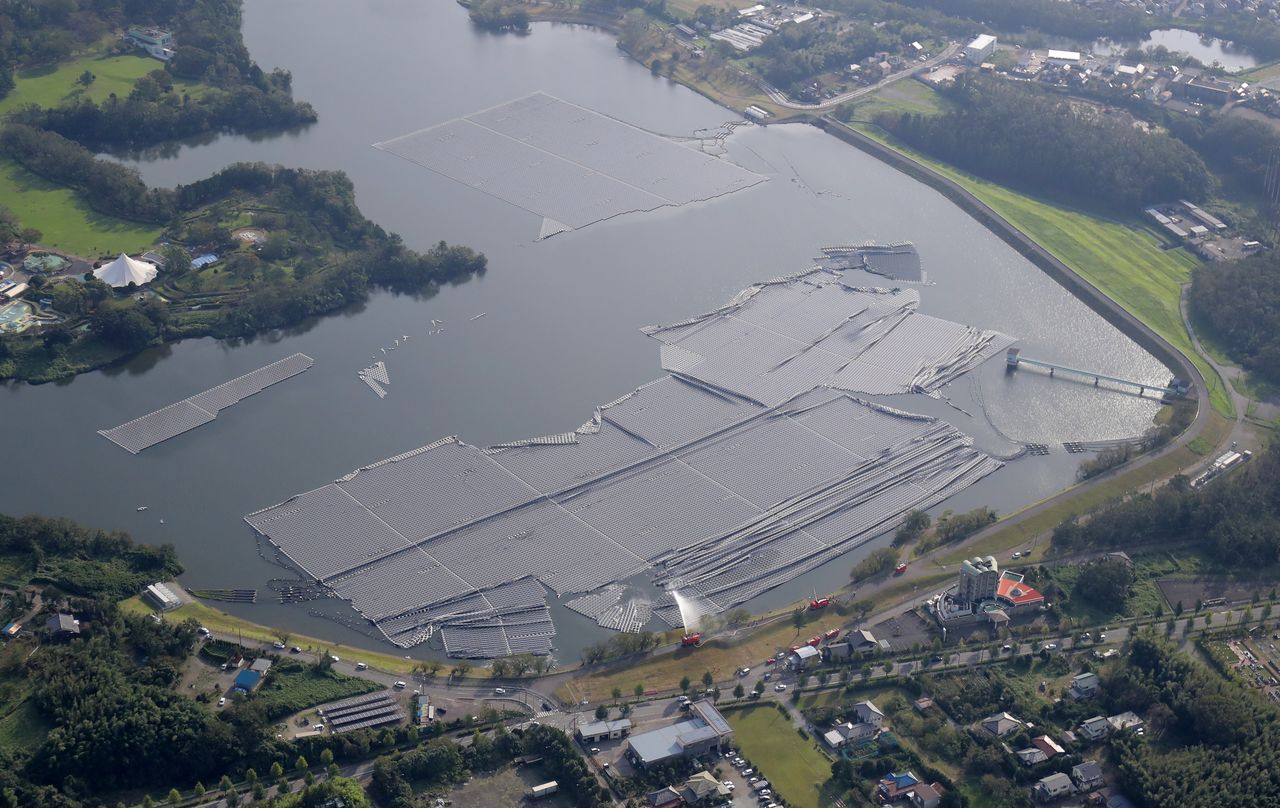 Solar panels damaged by the typhoon in Ichihara, Chiba Prefecture, on September 9, 2019. (© Jiji)

Nissan President and Chief Executive Officer Saikawa Hiroto announces he will step down on September 16 after a scandal over the company’s executives receiving excess stock-related compensation.

South Korea’s Ministry of Trade, Industry, and Energy announces that it will file a complaint with the World Trade Organization regarding the Japanese government’s tightening of export controls on three materials for semiconductors. Japan’s Minister of Economy, Trade, and Industry Sugawara Isshū says that the government action is consistent with WTO rules.

Softbank affiliate Yahoo announces its plans to acquire Zozo, which operates the clothing retail website Zozotown. It will launch a takeover bid in early October, which could rise as high as ¥400 billion. 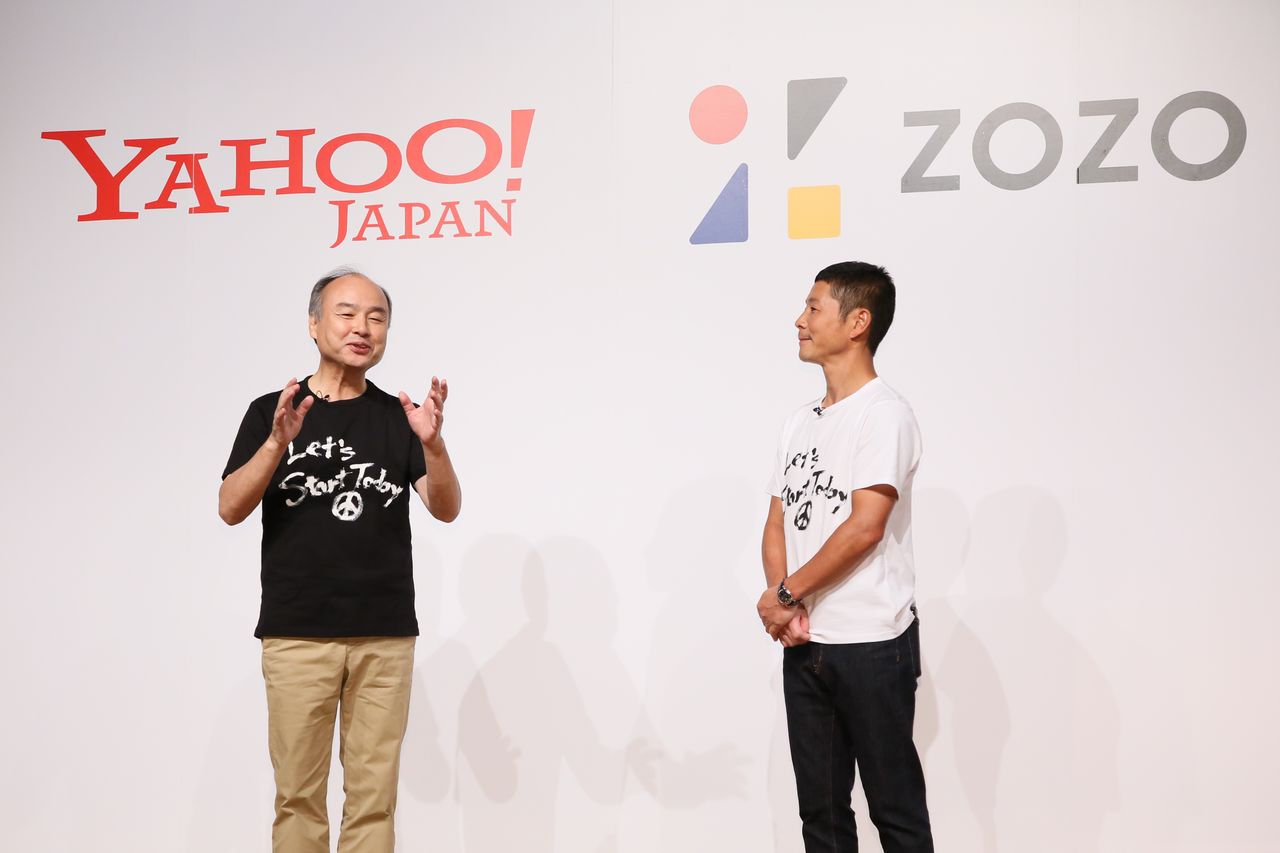 The Ministry of Agriculture, Forestry, and Fisheries announces that there has been an outbreak of swine fever at a farm in Chichibu, Saitama Prefecture. On September 20, Minister Etō Taku states a shift in policy to prevent the spread of the disease by vaccinating farm pigs.

The second petty bench of the Supreme Court rules that the Fukuoka High Court should reexamine its ruling that favored the government in a dispute in which locals argued that closing off Isahaya Bay in Nagasaki Prefecture with a dike harmed fishing operations.

The Vatican announces that during a November 23–26 visit to Japan, Pope Francis will mourn the victims of atomic bombings in Hiroshima and Nagasaki.

On Respect for the Aged Day, the Ministry of Internal Affairs and Communications announces that Japan’s senior population aged over 65 has risen by 320,000 to 35.9 million, representing 28.4% of the total population. This is the highest proportion among 201 countries and territories worldwide.

Funato Yuri is sentenced to eight years in prison for negligence resulting in the death by abuse of her five-year-old daughter Yua at the hands of the girl’s stepfather.

The MHLW announces that the repatriated remains of 581 people thought to be Japanese World War II prisoners who had died in Siberia may not actually be Japanese.

The first Rugby World Cup to be held in Asia begins with a victory for Japan over Russia at Tokyo Stadium. 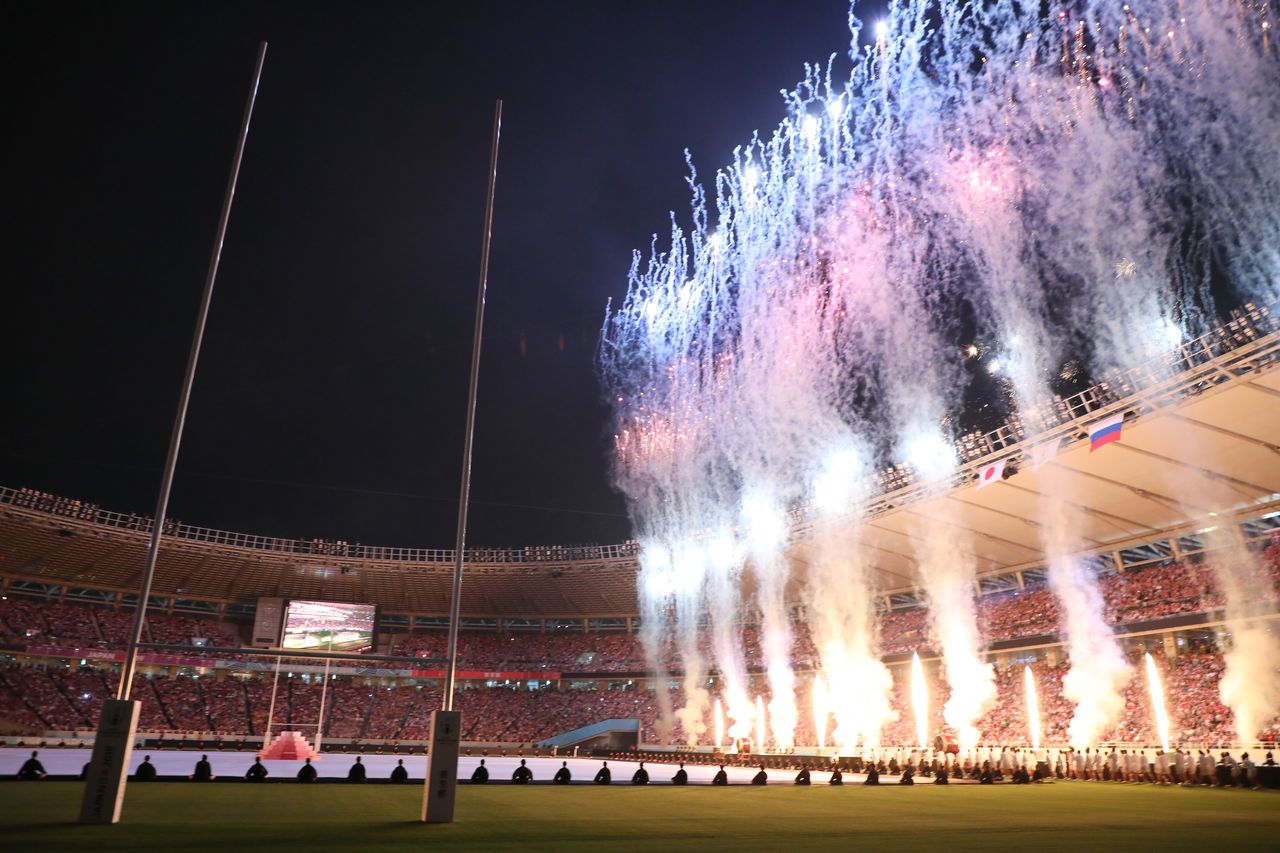 Fireworks are set off at the Rugby World Cup opening ceremony at Tokyo Stadium on September 20, 2019. (© Jiji)

Prime Minister Abe meets with Iranian President Hassan Rouhani in New York to discuss tensions between Iran and the United States. Abe asks Iran to take responsibility for ensuring the safe passage of ships through the nearby Strait of Hormuz.

Prime Minister Abe meets with US President Donald Trump in New York, where the two leaders issue a joint statement confirming final agreement on a bilateral trade deal. While Japan lowers tariffs on agricultural products to Trans-Pacific Partnership levels, the United States does not remove automobile tariffs, as it would have done under TPP.

Kansai Electric Power Company President Iwane Shigeki announces at a press conference that a total of 20 company executives, including Chairman Yagi Makoto and himself, had privately received money and goods amounting to ¥320 million from a now deceased deputy mayor of Takahama in Fukui Prefecture. Iwane claimed that they had returned anything that exceeded the normal level for courtesy.

In its Pool A match, Japan wins 19–12 against Ireland, which had been considered a championship contender for the Rugby World Cup.

Japan Post announces that it has confirmed 6,327 irregularities in the sale of insurance products by Japan Post Insurance as of September 27. It will refrain from selling these  products through the rest of 2019.