Keeping the “Ama” Tradition Alive in the Seas of Mie

Society Jun 27, 2017
Mie Prefecture is home to around 1,000 ama, the women freedivers who keep alive a 3,000-year-old way of fishing. Today there are only around double this number in all of Japan, a sharp decline from more than 17,000 half a century ago. As the ama population ages, what can be done to keep this traditional occupation afloat? 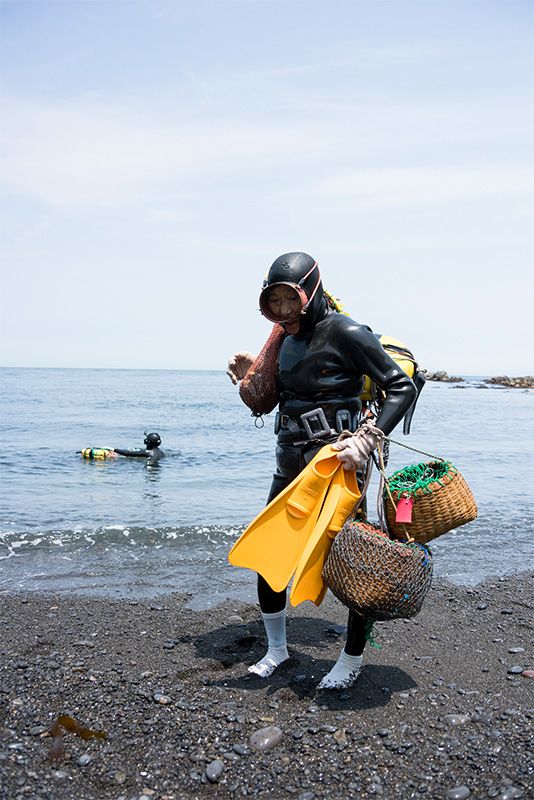 An ama diver comes ashore with her catch.

On a sunny afternoon in late May, Kimura Masako’s orange fins flash amid the whorls of kelp as she disappears beneath the surface of the sea. The only marker of her presence is a multicolored buoy bobbing in the waves a few meters off the rocky headland. After what seems an age, but is less than a minute, Kimura reappears alongside her buoy and gives one of the shrill, haunting whistles known as isobue—the unmistakable hallmark of an ama, one of Japan’s freediving fisherwomen.

After depositing her catch in a bag attached to the buoy and recovering her breath, she once more dives in search of abalone, octopus, turban shells and the other bounty that lies in the waters off of Ijika, Mie Prefecture. After a full two-and-a-half hours in the water, Kimura makes her way to the crescent-shaped beach and drops a wicker basket containing her haul—large abalone and another variety of the smaller, sought-after shellfish.

“The water wasn’t clear today and it was difficult to see out there, so it was a disappointing day,” she says, gesturing at her basket. “But this is the best time of year. The water is warm and we’ll be able to sell the abalone for a good price.” 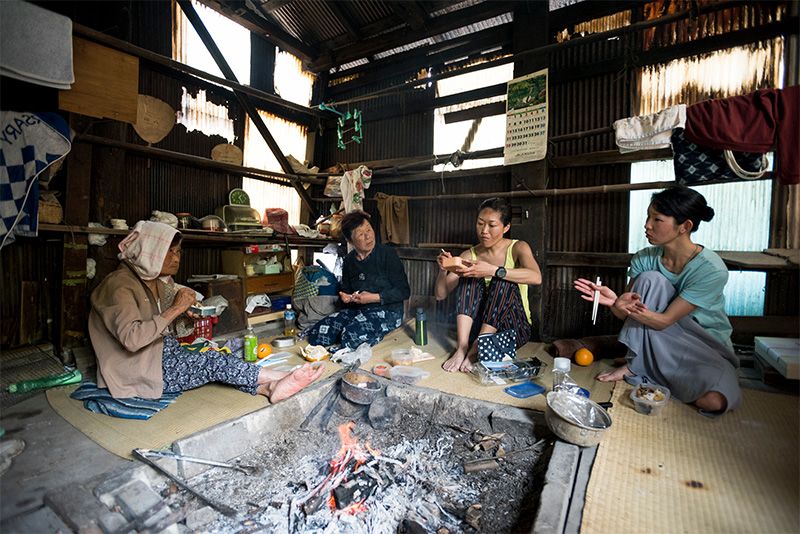 Divers warm up around the fire in the ama hut.

Kimura is one of just 2,000 hardy women who continue the tradition of ama diving across Japan, working in the ocean without breathing apparatus and with few refinements from when their ancestors went searching for the same staples wrapped only in white cotton clothing and armed with a kaginomi hooked tool. In this area, this line of work has traditionally been the preserve of women, who are reputedly able to hold their breath longer than men and who tend to carry more of the subcutaneous fat that insulates them from the cold.

Records and artifacts found in this part of central Japan indicate that dive-fishing has been going about at least 3,000 years. There are worries today in ama communities, however, that this long tradition may not last much longer: Divers’ numbers are falling as young women look for safer and better-paid work in the cities.

“I took up diving after I retired twenty years ago and I’m now eighty years old,” Kimura says as she warms up in a ramshackle driftwood hut above the high-tide line. The women warm themselves around a blazing fire here after hours in the ocean.

“All the women in the village of Ijika have always been ama because there were no other options for women to work,” Kimura says with a shrug. “We’re a long way away from the city and in the past the transport links were poor, so it was almost like living on an island.”

Kimura is in a hurry to get to the market to sell her catch; she hangs up her face mask and black wetsuit—one of the few concessions to modernity that the women have adopted—and lugs her basket up the valley to her car. 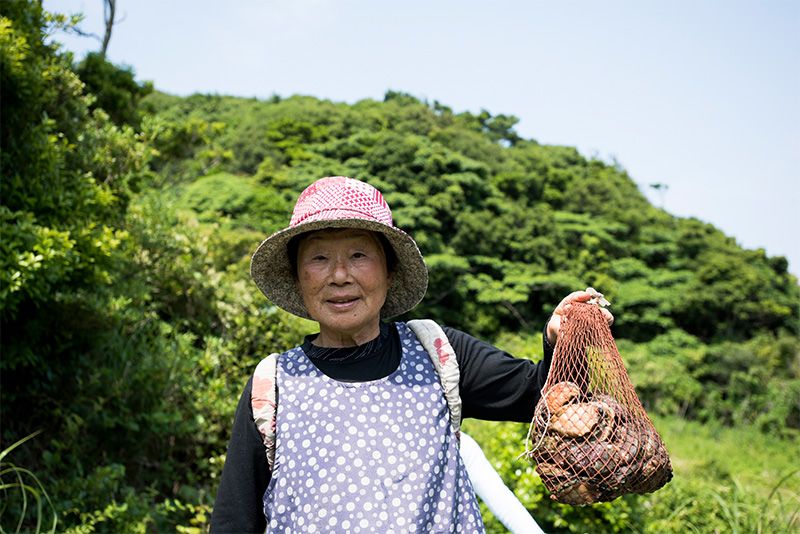 Kimura heads for the market where she will sell her day’s catch.

In 1956, there were more than 17,000 women freedivers making a living from the ocean around Japan. Today, the practice has died out entirely in some parts of the country. Ama can still be found in 18 prefectures, but the largest number—around 1,000, or half the national total—work the Pacific waters off the Shima Peninsula in Mie during the fishing season.

Outside the season, these women earn a living from working in local ryokan inns or shops. A newer addition to their repertoire has been the opening up of their huts to visitors who come to hear their experiences.

“I was fourteen when I started diving and I stopped five years ago when I turned eighty,” says Nomura Reiko, who wears the traditional white garb while working at the Ama Hut Hachiman restaurant, just behind the seawall in the village of Ōsatsu. 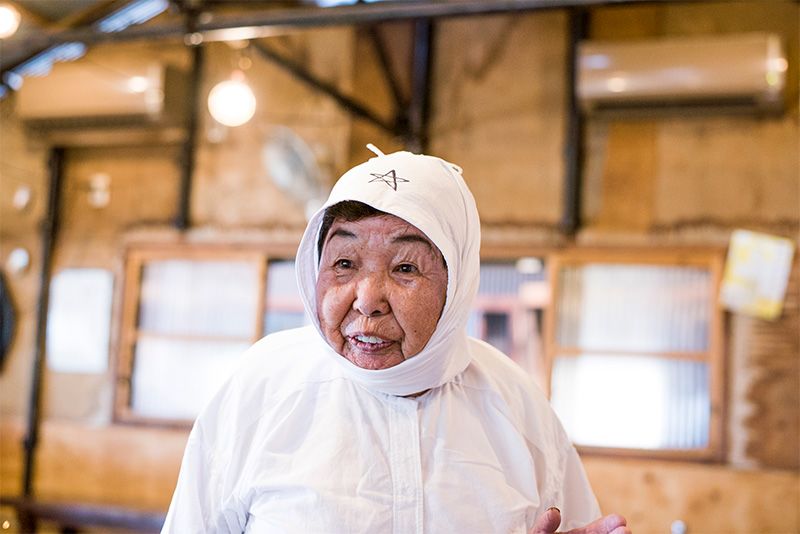 Nomura Reiko, 85, regales visitors with tales of her more than six decades beneath the waves.

“My mother, my grandmother, and my great-grandmother were all ama. That’s just what women have always done in this area,” she says. “It was almost a rite of passage for women here—if they were not ama, they couldn’t get married.”

In her 66 years of diving, Nomura admits to a few frightening experiences. More than once, the rope attached around her waist became caught on a rock on the seabed or entangled in seaweed. But every time, she says, remaining calm helped her figure out a way to safely get back to the surface. 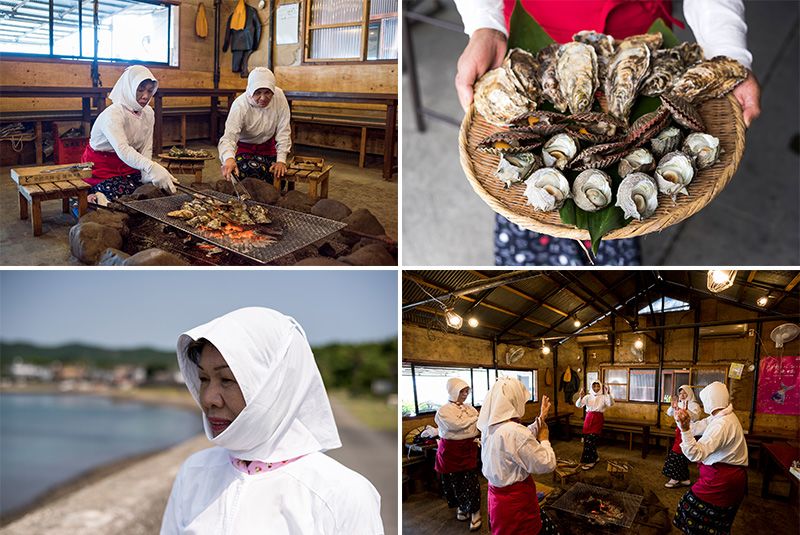 Clockwise from top left: Grilling shellfish on the hut’s fire; oysters, scallops, and turban shells fresh from the bay; ama perform a traditional dance for visitors; Okano Mitsue, 70, works both at the ama hut and continues to dive.

Nomura’s colleagues, all veteran divers, prepare locally caught turban shells, oysters, seaweed, and scallops on the open fire in the center of the hut and serve visitors while she speaks.

Like many older women, Okano Mitsue (70) worries about the shortage of younger divers. “All of us here have daughters, but after seeing how cold we were coming back from a day in the sea, none of them wanted to do this job,” she sighs. “And it’s difficult to make a living only as an ama these days. We usually need another job to get by.”

There are two types of ama divers; kachido, who simply walk off the beach into the ocean or go by boat as a group, and funado, who operate from boats, often with their husbands at the tiller. Wetsuits may have replaced the cotton wraps, but the women still decline oxygen tanks that would permit them to stay beneath the surface for far longer. It is a matter of tradition, they say, while also preventing overfishing by limiting the time they can spend on the sea floor.

Even short freedives can be dangerous, of course. The women sketch traditional designs on the hoods of their suits that they believe will protect them and ensure that they return to shore. They also regularly visit Shinmei Shrine, which is atop a low hill that overlooks the town of Ōsatsu. The main precinct of the shrine is beyond a weathered wooden torii gateway, but off to one side is the Ishigami-san, a place of worship for ama. Two lanterns stand either side of the altar, where ama, have left offerings of sake and rice crackers. A red-and-white plaited rope leads to a tinny gong that attracts the attention of the kami when prayers need to be heard. 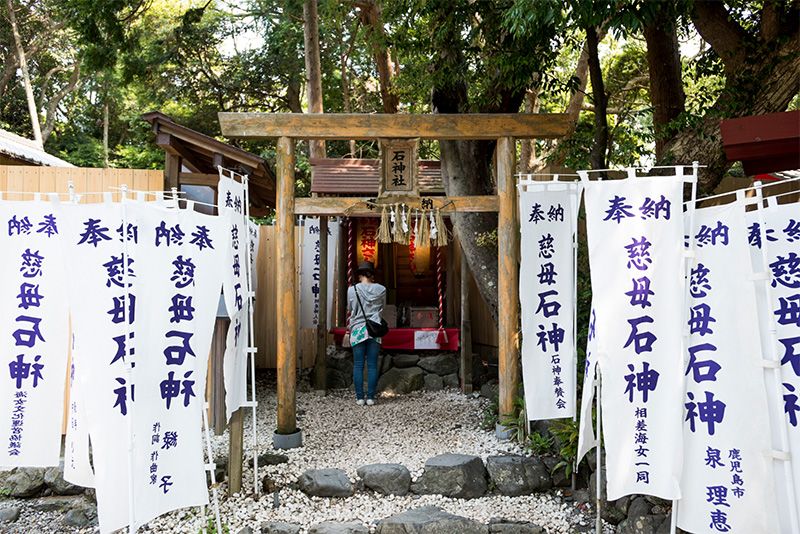 Ishigami-san is in the grounds of Shinmei Shrine. Legend says that it can grant every woman one wish during her life.

A Youthful Future for the Ama?

Yet there are still some youngsters who are willing to brave the elements and the dangers of the ocean to keep the traditions alive. 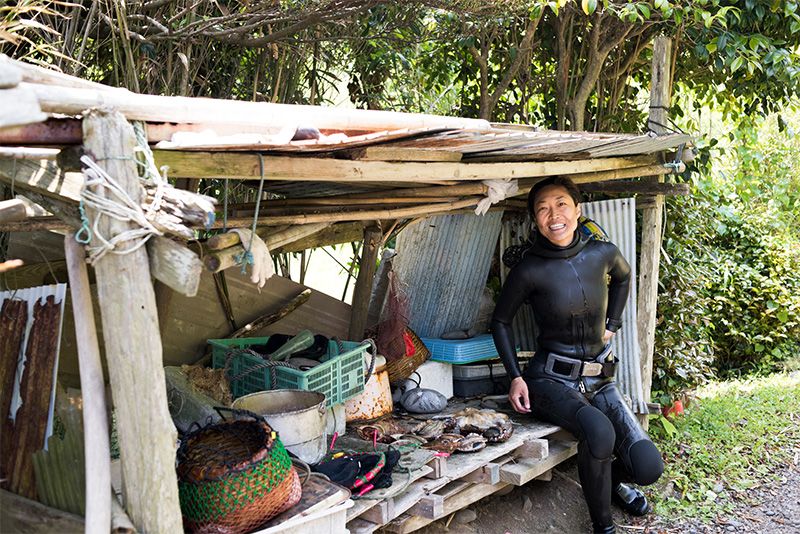 “Since I was a child I’ve always loved the ocean. I do a lot of marine sports, like surfing, ocean kayaking, and scuba diving,” said Ōno Aiko, 38, who was a professional photographer living in Tokyo before starting work as an ama in October 2016. She replied to an advertisement by the Toba municipal government seeking apprentices who wanted to move to the rural community and take up the ama life. 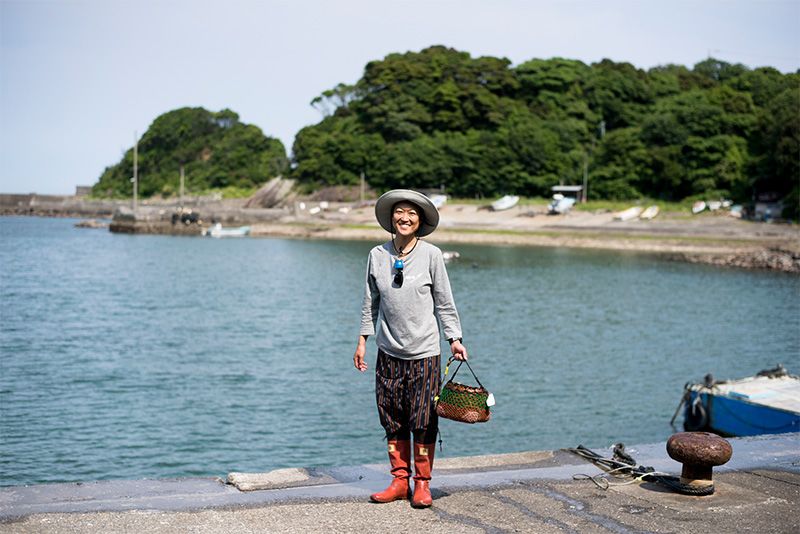 A former Tokyoite, Ōno now considers herself “part of the ama family.”

“All the time I lived in Tokyo, I felt that I wanted to live in a place where I could see the ocean,” she says. “Becoming an ama was my fate.”

Since moving to the Shima Peninsula, Ōno says her life has become much simpler and that she is the happiest she has ever been. She admits that it can be challenging, though, to live in a village with few companions of her own age.

“I was an outsider when I first arrived, so it was a little difficult to fit in,” says Ōno. “But now I’m part of the ama family.” she smiled.

As part of this family, she is making it her mission to protect the way of life from the existential threat it faces. “Part of my role is to make the image of ama cool—to showcase it as the perfect lifestyle for young women,” she adds. “ I want to do everything I can to make sure the ama lifestyle does not die out.”

(Originally written in English. All photos © Motono Katsuyoshi. Banner photo: An ama diver returns to shore with the float carrying her catch.)