Culture Dec 7, 2016
A Fukushima orchard has succeeded in growing peaches with almost 50% higher sugar content than the sweetest peaches on record. We visited with proprietor Furuyama Kōji, one of a group of young producers who are changing the face of agriculture in Japan.

This year, a peach from Furuyama Fruit Farm in central Fukushima Prefecture tested at an unprecedented 32 degrees Brix, the highest sugar content ever recorded for a peach. To put that number in perspective, your average ripe peach falls somewhere between 11°Bx and 14°Bx, and the Guinness World Record for peaches is 22°Bx. Next year, the farm plans to apply for a new Guinness record title, says Furuyama Kōji, the farm’s 40-year-old proprietor.

Furuyama Fruit Farm’s super-sweet Akatsuki Neo peaches are the product of a decade of assiduous soil-improvement efforts combined with the results of an experimental soil-improvement project commissioned three years ago by a farming company in Miyagi Prefecture. 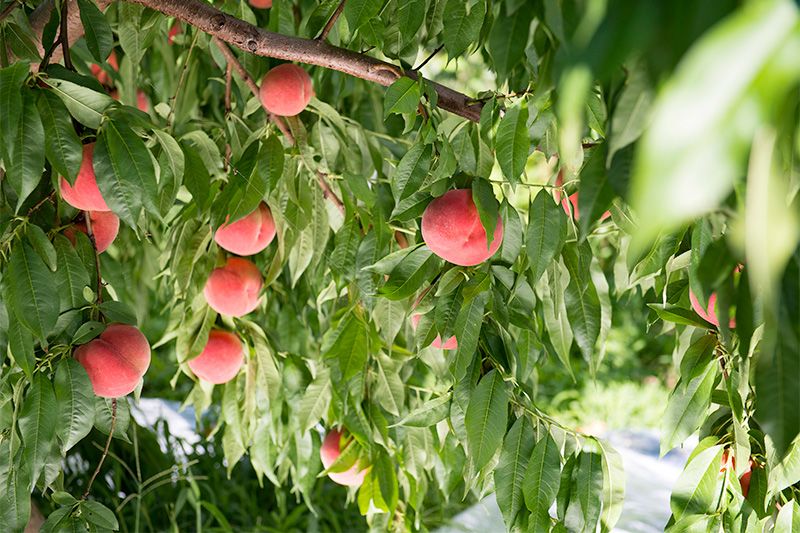 In general, Fukushima peaches are prized for their firm, juicy texture, as well as their exceptional taste. Furuyama Fruit Farm grows 16 different varieties of peach. When we visited in August, four of those varieties were fruiting: Akatsuki Neo, Kawanakajima white, Tōkō, and Ōgontō.

Because peaches are fragile, most orchards pick them while they are still slightly immature and allow them to ripen in transit. This minimizes the risk of over-ripening, not to mention damage from insects and high winds. But it also compromises freshness and taste. Furuyama Fruit Farm harvests only tree-ripened peaches on the principle that a peach picked today should be eaten tomorrow. “Tree-ripening is the ultimate extravagance when it comes to peaches,” says Furuyama, who claims to know the idiosyncrasies of each tree. “We can only do it because we’re a small operation.”

Growing premium peaches requires some patience. Although an old Japanese rule of thumb says that peach saplings take three years to bear fruit, Furuyama insists that they take at least five to mature and another ten to yield peaches a grower can ship with confidence.

Preparations for the summer and fall harvest begin early in the year, not long after the end of the apple harvest. (Furuyama Fruit Farm grows apples as well as peaches.) The orchard’s 230 peach trees are carefully pruned between January and March. In April  workers thin the buds  to 1,500 per tree.  In May they manually cross-pollinate these and then wait for the peaches to form and ripen. Harvesters check each peach by sight and touch, picking only the finest fruit. Each tree yields roughly 500 peaches annually, and it takes about 10 days to harvest each variety. While Furuyama believes in efficiency, he is also convinced that tender loving care is the key to delicious peaches.

From Engineer to Fruit Farmer

The Furuyama family has been in the fruit-growing business for five generations now, since 1883. Furuyama Kōji, the current proprietor, started out as a production engineer at the nearby manufacturing plant of a major appliance maker. Trained to value efficiency along with quality, he came to believe that similar principles could be applied to agriculture. When the time was “ripe,” he made the decision to quit his job and devote himself to the family business full-time with the aim of building an operation attuned to a diverse and changing market.

That was in July 2010. The following spring, Furuyama faced a deepening crisis in the wake of the Fukushima Daiichi nuclear accident. Orders for gift-quality fruit plunged 60%, and shipping was out of the question until the farm could procure the equipment needed to test the fruit for radioactivity.

Fortunately, that year the orchard’s peaches were found to register less than 100 becquerels per 700 gram, well below the legal limit, and the following year they tested radiation free. Armed with a clean bill of health, Furuyama decided to leverage the Internet to launch direct sales while publishing all safety data online.

Despite the vicissitudes of his new career, Furuyama has no regrets.

“In engineering, you solve a problem, and you’re done,” says Furuyama. “But in farming, the possibilities are limitless, and as long as you work at it, you can keep improving. I find that exciting.” Of course, being living things, peaches and other crops can sometimes frustrate growers’ best efforts. But for Furuyama, that is part of the challenge. “For me, progress means figuring out how to avoid those frustrations and make things happen.”

Furuyama belongs to a dynamic new generation of Fukushima producers who are breaking free of the old farming patterns, actively cooperating and competing as they adopt innovative growing and marketing methods. On March 11, 2015, exactly four years after the nuclear disaster, a group of local farmers in their thirties and forties launched Cool Agri, an organization dedicated to revitalizing Japanese agriculture and “changing the image of farming into something fun, exciting, and cool.” In addition to Furuyama, its members include Chef Hagi Harutomo (who accompanied us on our recent visit to Furuyama Fruit Farm), owner of an innovative farm-to-table French restaurant in Iwaki, and producer Shiraishi Nagatoshi, one of Hagi’s producer-partners. 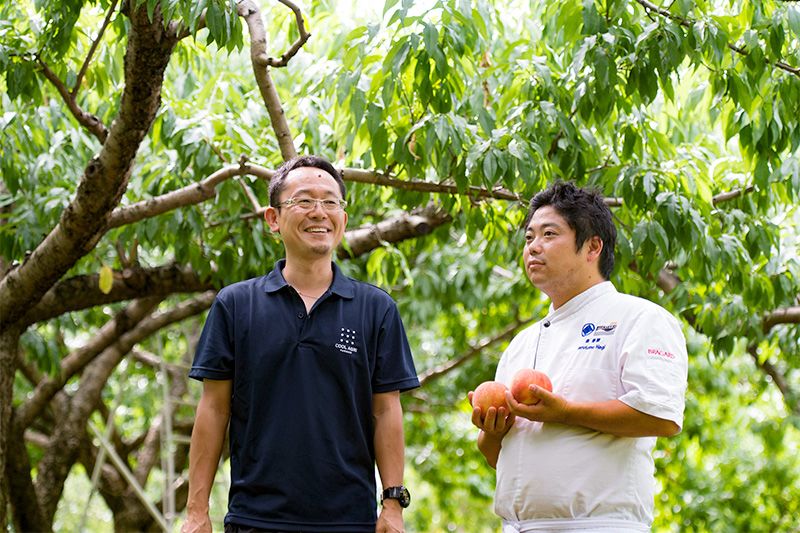 Among the projects to emerge from this organization were a series of grower-organized fruit farm tours (dubbed Fruit Tourism). Advertisements are sent out, giving interested individuals and groups an opportunity to tour a selection of local orchards, pears and strawberries and buy directly from the producers. The first tour, held in the autumn of 2015, was tailored specifically to chefs. Sixteen culinary professionals visited three local farms, where they had the opportunity to handle the produce and talk with the growers about sourcing.

Like an increasing number of young growers, Furuyama dispenses with the transportation and marketing services of the Japan Agricultural Cooperatives . He finds it more efficient to deal directly with consumers (via Internet sales), “antenna shops”  (Tokyo outlets featuring specialties from prefectures and municipalities around Japan), and the wholesalers and retailers who constitute his traditional clientele. 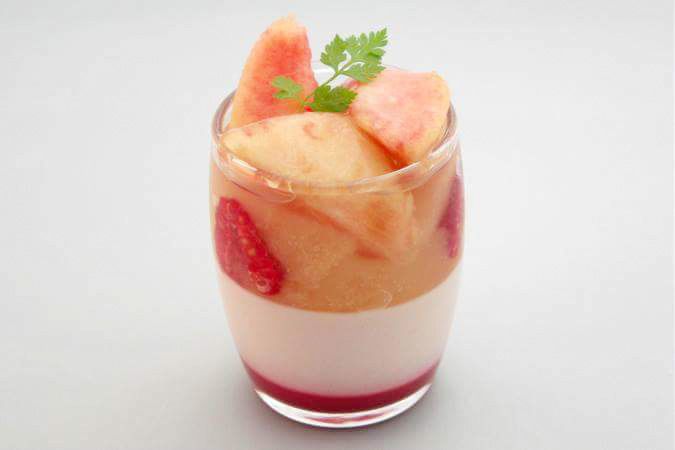 Peach Melba from the Tokyo patisserie Anniversary, featuring Furuyama peaches. The dessert, on which Furuyama collaborated, is a silky-smooth concoction of peach mousse and raspberry gelée topped with fresh peaches. © Anniversary Co., Ltd.

Getting the Word Out

To raise awareness, Furuyama participates in special events in Tokyo and other parts of the country and provides chefs with samples of his newest cultivars. After a Tokyo patissier visited his orchard in 2015, the two collaborated on development and marketing of a special seasonal dessert using Furuyama peaches.

Premium fruit is a popular gift item in Japan, and gifts still account for the bulk of Furuyama’s sales.  Unfortunately, peaches grown in the Tōhoku region do not ripen in time for the summer gift-giving season (chūgen). Henceforth, Furuyama plans to target individual fruit lovers as a promising new market segment. Furuyama and his colleagues are brimming with ideas for bringing as many people as possible to their orchards to taste a Fukushima peach right off the tree. 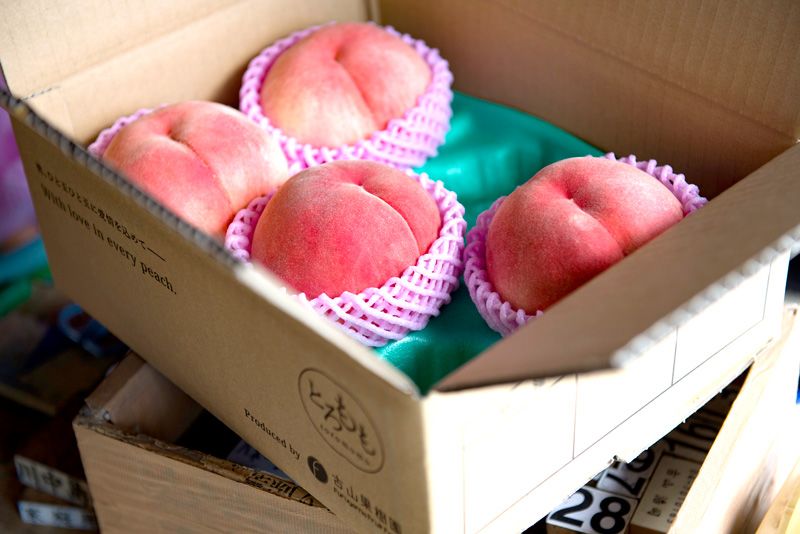 A crate of Furuyama peaches heads for a special event in Kasai, Tokyo, where the fruit will go on sale for a fraction of its normal price. © Kodera Kei.

“What I really recommend is that people come when the Akatsuki Neos are ripe and sample a 30-degree peach straight off the tree,” says Furuyama. There are always some “perfect gems” left over from the day’s harvest, he explains. “If you come during the peak Akatsuki Neo season, you’ll have a chance to taste an unbelievably delicious peach.”

But Furuyama is not content to wait for people to come to him. On the day after our visit, he planned to sell some of his peaches at a special event in the Kasai district of Tokyo—at a tenth of their normal price. “I’ve been taking my peaches to Tokyo at the end of summer every year since the earthquake hit. Customers wait in line to buy them.” For Furuyama, knowing people are enjoying the fruit of his labors is the ultimate reward.

(Originally written in Japanese and published on November 3, 2016. Banner photo: Furuyama holds a peach in his hand after spelling out “peach” on his fingernails. © Kodera Kei.)