Disaster and the Japanese Spirit

The Japanese archipelago is located in a zone of high seismic activity, and there are numerous records of earthquakes over the country's history. In classical Japanese literature, however, earthquakes are almost entirely absent. Why is this? There are two main reasons.

First, earthquakes are primarily urban disasters. Most earthquake victims are city dwellers who are killed either by fires or by rubble from falling buildings. But large cities with tall buildings are a relatively recent phenomenon. In ancient and medieval Japan, even towns were relatively rare, and these were really little more than overgrown villages. The only tall buildings were Buddhist pagodas.

In addition, the traditional Japanese house took into account the threat of earthquakes. The frame was made of wood and held together by interlocking joints, rather than nails. The interior “walls” (fusuma) were made from paper. The main pillars were not driven into the ground or fixed to the foundations. Instead, they rested on rounded stones. This looser connection allowed them to remain relatively stable even if the ground shook violently underneath. 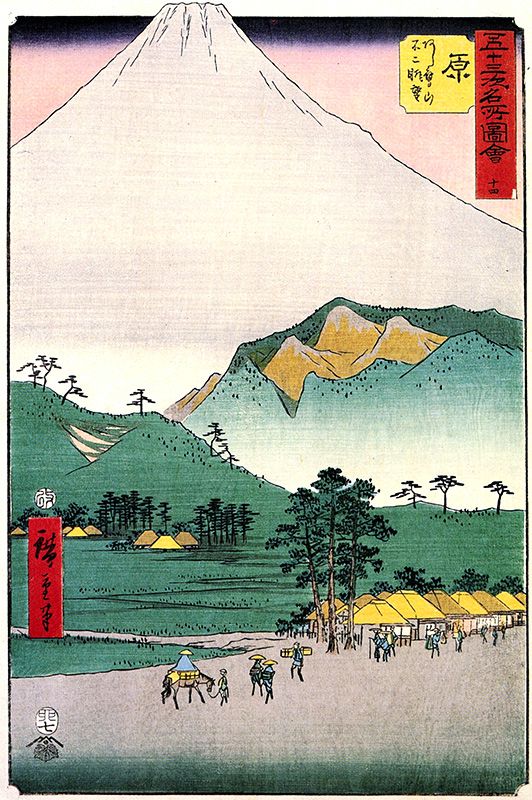 A view of Mount Fuji and the extinct volcano Mount Ashitaka from Famous Places of the Fifty-Three Stations by Utagawa Hiroshige.

The second reason that we have so little information about historical earthquakes from contemporary sources is purely ideological. In the political philosophy of Japan (and other parts of East Asia), an earthquake was seen as punishment from heaven for poor or unjust government. For this reason, anyone who dared to write about or depict an image of an earthquake would be regarded as a critic of the powers that be.

The reluctance to represent natural disasters extended to volcanic eruptions as well as earthquakes. Mount Fuji is now a symbol of Japan and its natural beauty, but this was not always the case. While the people of the Edo period (1603–1868) regarded it with awe as a sacred place, they feared its volcanic temperament. Fuji last erupted in 1707, after a series of minor tremors that followed a large earthquake some weeks earlier, showering the whole of Edo (now Tokyo) with a layer of ash. But there are almost no written records of this great disaster. Artists continued to paint a majestic and tranquil Mount Fuji, as if the eruption had never happened. Poets took the same approach. 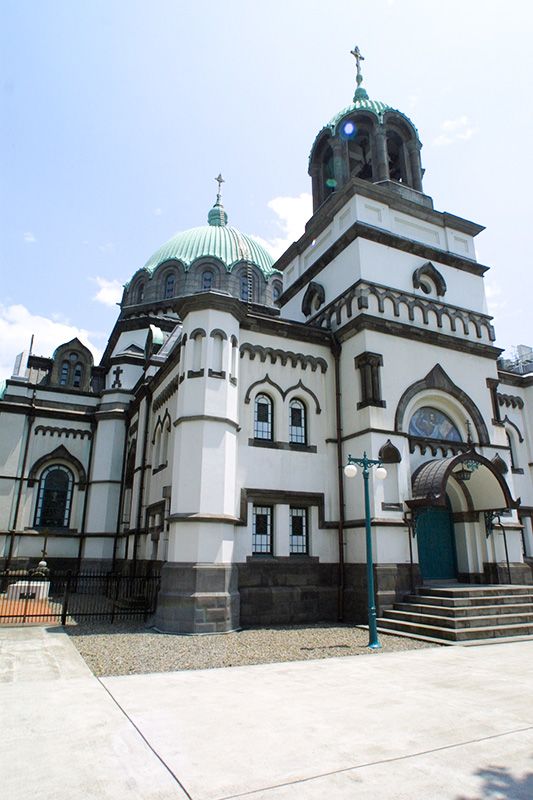 The Holy Resurrection Cathedral (Nikolaidō) in Ochanomizu, Tokyo. Its reconstruction after the Great Kantō Earthquake was funded by donations from Orthodox communities around the world, but mostly from the Japanese congregation.

Japan's fear of earthquakes grew in the twentieth century. The burgeoning population became increasingly urbanized and began to live in brick buildings instead of wooden structures. This meant greater devastation when a major earthquake occurred. As the population of coastal areas grew, moreover, so did the death toll from typhoons.

On September 1, 1923, Japan suffered its worst natural disaster of the twentieth century when the Great Kantō Earthquake struck the Tokyo region. Out of the roughly 3 million people inhabiting the area, around 100,000 people died. Some were crushed by falling rubble, while many others perished in the fires caused by the temblor or drowned in rivers while trying to escape the flames. The electricity and water supplies, telephone and telegraph lines, and other infrastructure were paralyzed, and most of the capital's stone buildings—proudly introduced in contemporary Tokyo guidebooks as new landmarks—were destroyed.

The Holy Resurrection Cathedral, completed in 1891, was Tokyo's tallest building for many years. It was built by the Russian Orthodox priest Ivan Dimitrovich Kasatkin, later canonized as Saint Nicholas of Japan. The Great Kantō Earthquake caused the cathedral's bell tower to fall and its dome to collapse. The only major landmark to survive the disaster largely unscathed was the Imperial Hotel, designed by the great American architect Frank Lloyd Wright. It was Japan's first stone building with earthquake-resistant features and was completed the year before. The total cost of damage caused by the disaster is estimated to have been four times the national budget. 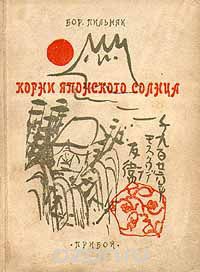 Roots of the Japanese Sun by Boris Pilnyak.

Even amid the chaos of this unprecedented disaster, the Japanese maintained their stoicism. In Roots of the Japanese Sun, the Russian author Boris Pilnyak wrote this account. “After the fires, the survivors came to dig out the corpses, and the living saw that the dead had died and carbonized, lined up in perfect order—and the living found children alive beneath the dead. The adults had carbonized in an orderly manner, died without panic, or almost without panic, and in becoming carbon, had saved the children with their bodies.”

Polish diplomat Stanislaw Patek described the miraculous reunion between a father and daughter separated in the confusion after the earthquake. “They did not fall into each other's arms, instead bowing deeply in the traditional polite Japanese manner with their hands together in front of their bodies and quietly exchanging a 'Good evening' greeting. They did not touch each other.”

Experiencing great sadness with others has a humanizing effect. Author Akutagawa Ryūnosuke wrote the following about the disaster.(*1) “When the great earthquake finally subsided, the people who had escaped into the streets displayed a sudden cordiality. Almost everywhere it was possible to see . . . people chatting amiably, offering each other cigarettes and nashi pear, and looking after each other's children, whether they were neighbors or not. . . . Those who had fled to the lawn . . . opened up to each other and seemed to be greatly enjoying themselves. . . . It was, in any case, a beautiful scene of unprecedented kindness prevailing among such a large crowd of people. I would like to treasure this memory forever.”

The next major Japanese earthquake to come to global attention was the magnitude 7.3 Great Hanshin-Awaji Earthquake that struck Kobe and nearby areas on January 17, 1995. It claimed the lives of 6,000 people and exposed many construction design flaws and problems in the organization of rescue work. The slow reaction of the national government provoked deep public dissatisfaction. Adding insult to injury, organized crime groups stepped in to aid victims with deliveries of water and food. Despite the crisis, residents resisted selfish impulses and showed a spirit of cooperation. Even those who had lost eveything waited in orderly lines for emergency food and other supplies, never resorting to looting.

Many important lessons emerged from the 1995 earthquake. Stricter building standards for seismic resistance and quality of construction were introduced, together with more systematic education on disaster preparedness. But nature goes its own way and writes its own scripts.

Japan’s Spirit Has Not Changed

March 12, 2011, was a Saturday. I woke up later than usual and turned on the radio. The announcer said that the previous day a huge earthquake had struck Japan, followed by a devastating tsunami. There were no details of casualties.

Around noon, I got a call from the Russian channel TV Rain, asking to me to come to the studio and comment on the situation in Japan. The presenter began the program by announcing that panic reigned in Fukushima and that looting was rife. I interrupted her to say that I did not believe any such thing was taking place. She looked incredulous, but the world soon realized, through various media reports, that even after a major disaster, looting is not a problem in Japan. The event was tragic and terrifying, but I was glad at least that the Japanese did not betray my faith in their honesty.

I have heard many times, from people who do not really know Japan, that the country is not what it once was. The Japanese no longer wear kimono, they listen to Western music, they eat bread instead of rice, and so on. But these are superficial changes. The Japanese people remain true to their spiritual values, and prominent among these is the belief that it is wrong to steal.

Another frequent criticism is that young Japanese people today are inferior to the generation that put Japan back on its feet after World War II; they care only about themselves and their individual problems, not their country or society as a whole. The disaster showed this to be untrue. Many young people from around Japan volunteered to help with recovery work. I myself met a beautician who cut the hair of people in the affected area for nothing, as well as an artist who painted portraits of survivors free of charge.

The Fukushima tragedy brought out and highlighted the excellent qualities of the Japanese people. At the same time, it exposed serious problems that nations around the world must face. Scientific and technological development has led people to believe that humanity is omnipotent, that it has “tamed nature.” This is a huge error of judgment. The construction of nuclear power plants in an earthquake-prone country like Japan was a mistake from the outset. In that sense, the tragedy of Fukushima is rooted in human as well as natural causes. The builders of the future must remember that nature lives by its own rules and does not forgive human arrogance or negligence. But I believe in the ability of the Japanese people to learn from and correct their mistakes.

(Originally published in Russian on March 11, 2016. Banner photo: Namazu-e [catfish print] of the 1855 Edo earthquake, from the Ishimoto Collection. In the Edo period, there was a belief that earthquakes were caused by a giant catfish.)

(*1) ^ From Taishō jūninen kugatsu tsuitachi no daishin ni saishite (At the Time of the Great Earthquake on September 1, Taishō 12).—Ed.