Scouting for the Sex Industry: The Kabukichō Background of the Zama Killer

Society Mar 8, 2018
In October 2017, nine dismembered bodies were found at an apartment in Zama, Kanagawa Prefecture. The suspected killer, Shiraishi Takahiro, had previously worked as a street scout for the sex industry in the Tokyo red-light district Kabukichō. This article uncovers the world of scouts and how it has changed under pressure from government crackdowns.

“It’s frightening how gentle and mild-mannered he was.” Many of the women who knew 27-year-old Shiraishi Takahiro—arrested for nine killings in Zama after dismembered bodies were found in his apartment—offer the same testimony.

Shiraishi was a scout for the sex industry, operating in Kabukichō, Tokyo’s main red-light district. Since the news of the murders was splashed across the Japanese media last year, fellow scouts and others connected to adult establishments, including women who dated or lived with him, have given their impressions of Shiraishi in interviews. Why is there such a gap between the “gentle” man these women knew and the brutality of his crimes?

“I can really understand why the girls would say that,” says the boss of a Tokyo scouting company. “A scout’s job doesn’t end when he brings a girl to a club. He’s like a manager and consultant, negotiating her treatment and giving guidance on getting money from clients to support herself. This relationship continues until she leaves the business. Girls nowadays tend to be in it for what they can get and are always thinking about moving to a better club, so they trust scouts more than the people where they work. It’s pretty common for a few private words of advice to lead to a sexual relationship.”

In other words, displaying a kind manner to women is part of the scout’s job and very much in his interest.

A Prior Suspended Sentence

Body parts of eight women and one man aged 15–26 were discovered in Shiraishi’s apartment in Zama, Kanagawa Prefecture, on October 30, 2017. The following day, he was arrested on suspicion of dumping a corpse. Since then he has been rearrested seven times, as of February 13, 2018. The police authorities have amassed enough evidence to prosecute him for six of the murders, and are continuing investigation for the three remaining victims. 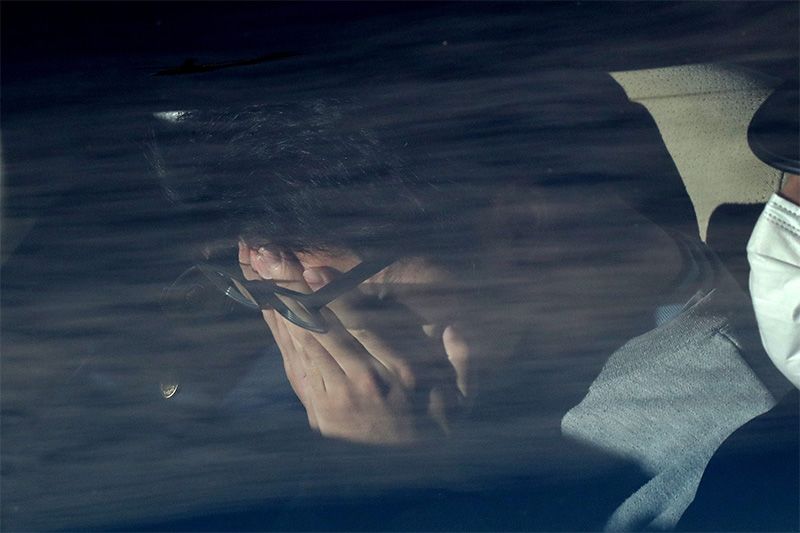 Shiraishi Takahiro leaving Takao Police Station in Hachiōji, Tokyo, to be taken to the Tachikawa branch of the Tokyo District Public Prosecutors Office on November 1, 2017. (© Jiji)

Shiraishi lived in Ikebukuro, Tokyo, from around the age of 25, mainly working as a scout in Kabukichō. Some who knew him described him as a smooth talker when soliciting women, while others disagreed, saying he was irresponsible and had a bad reputation. Eight months before the killings came to light, in February 2017, he was arrested for suspected violation of the Employment Security Act by knowingly introducing women to Ibaraki Prefecture clubs that operated as brothels. In May, he received a 14-month prison sentence (suspended for three years) for the offense. After this, he returned to Zama, where he grew up. In August, he started renting the apartment where the grotesque murders that shocked Japan took place.

There are three kinds of scouts: independent freelancers, workers for a particular cabaret club or other adult establishment, and employees of scouting firms. Shiraishi was in the third and largest group, which dominates the “scout alley” running from Shinjuku Station to Kabukichō. Here its members approach young women and entice them to work in the sex industry. Each company’s turf is precisely demarcated by markers like posts and utility poles, and staying within this area is an understood rule of the industry. Wages are entirely commission-based and finders’ fees vary depending on the type of establishment, such as “cabaret clubs” where customers drink with hostesses, “soaplands” where women wash customers, and “fashion health” massage parlors.

For example, cabaret clubs pay a one-off fee, ranking women based on their appearance, industry experience, and popularity. A scouting company would receive ¥50,000–¥200,000, and the scout would get 60%–70% of this. In the industry, this payment typically comes when the woman has worked for 10 days.

In establishments mainly offering sexual services, however, the company and scout continue to automatically receive a 10%–15% cut all the time the woman works there. For adult film actresses, the company and scout get a total of 40%–50% of the salary from the production. If a scout discovers a woman who goes on to be a popular actress, sudden riches can lift him out of the daily hustle.

The upper monthly earnings limit is typically around ¥300,000, however, and most scouts make nearer to ¥200,000. They also have to pay themselves for taking women to cafés or restaurants to make their pitches. Success or failure soon becomes a pattern. “The scouts who earn keep steadily earning, while the ones who don’t fall into a vicious circle of losing money,” says the scouting company boss.

Cleaning Up the District

Kabukichō was the product of postwar rezoning, a place where people rebuilt from the devastation of bombing to create a thriving nightlife district. Its shady reputation has, however, led to repeated government action, and street scouts are now severely restricted by ordinances and other legislation. One big turning point came in the 2000s, when Tokyo Governor Ishihara Shintarō launched a major clean-up campaign that transformed the face of Kabukichō. This included installing surveillance cameras, identifying illegal clubs, shutting out the yakuza, and regulating scout activity. 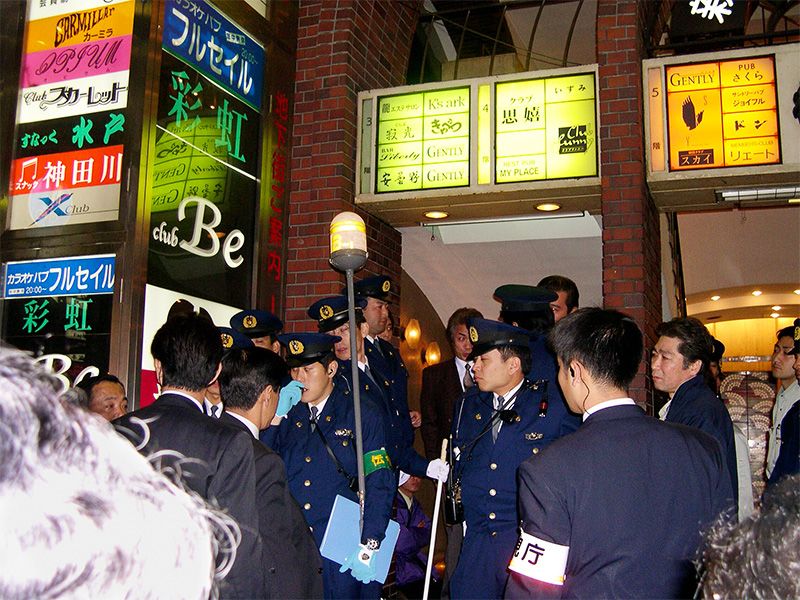 In April 2005, new legislation targeting Kabukichō touts and scouts came into force. Even assembling by the roadside was not allowed, and many illegal operators laid low while they sought loopholes in the law that would let them remain in business.

At the same time, yakuza organizations were no longer able to act openly. Tougher antigang laws and ordinances were backed up with measures aimed at eradicating the protection money paid by red-light district establishments to these groups. Police also worked to drive out foreign gangs, leading to the closure of many Chinese- and Korean-owned clubs.

The crackdown on yakuza and foreign gangs opened the way for the rise of loosely organized hangure gangs.

Despite the tougher conditions in the 2000s, a surprising development saw the street recruiter cohort increase as the company boss explains. “Just as the amended antinuisance ordinances came into effect, a manga suddenly sent scout numbers soaring.” The popular Shinjuku Swan depicted the ongoing adventures of a scout, first appearing in print in 2005 and being adapted to the big screen in 2015.

“Soon there were more recruiting companies, and the industry atmosphere changed completely. Most of the scouts were just idiots in love with the fashion who wanted to put on suits and do a job where they talked to girls. Recently they dress down, so they can get around the law by saying they’re only trying to pick girls up. But like hosts and yakuza, only one in ten is going to make it, so there’s a constant frenetic turnover with new faces every day. And so many have issues—they’ve got really short fuses, or they’re just plain weird—so it’s normal to hear of them causing trouble later.”

Many in the industry agree that there are a large number of highly peculiar scouts. A source at a Kabukichō club says, “It’s happening throughout the nightlife industry. A lot of them are hooked on marijuana or dappō hābu [the quasi-legal narcotics known as “law-skirting herbs” in Japanese]. Even if they seem normal, they’ll suddenly start shouting out in a weird voice or beating up one of the club girls like they’ve totally lost it. Once they’re driven out of the industry, most of the time you never hear from them again.”

Earning Their Keep at Home

As well as being infested with dangerous characters, the scouting business is not as lucrative as it once was. One way to survive is by using one’s own charms to infatuate the women who work in the industry. While living off them in this way was once taboo, a Kabukichō gang member suggests, “Recently, it’s been seen as the recommended path.

“There are more scout companies than ever, and plenty of employment ads online, so girls regularly change clubs. This means more club owners are telling scouts, ‘Make her fall in love with you so she doesn’t leave.’ But getting so close can easily lead to other problems.”

Many scouts continue to work while sponging off their girlfriends for most of their living expenses. The company boss comments, “You won’t find girls who’ll sell their bodies for their men any more, so these scouts have to earn their keep as househusbands, doing the cleaning and washing, ferrying her to the club and back, and taking her dog for a walk.

“That’s not all. They also have to reply to her customers on the Line social network, handle business emails, make a breakfast that looks great on Instagram, and post to her social media accounts as if she’s doing it herself. There’s no rest for men cadging off women in the nighttime entertainment business.”