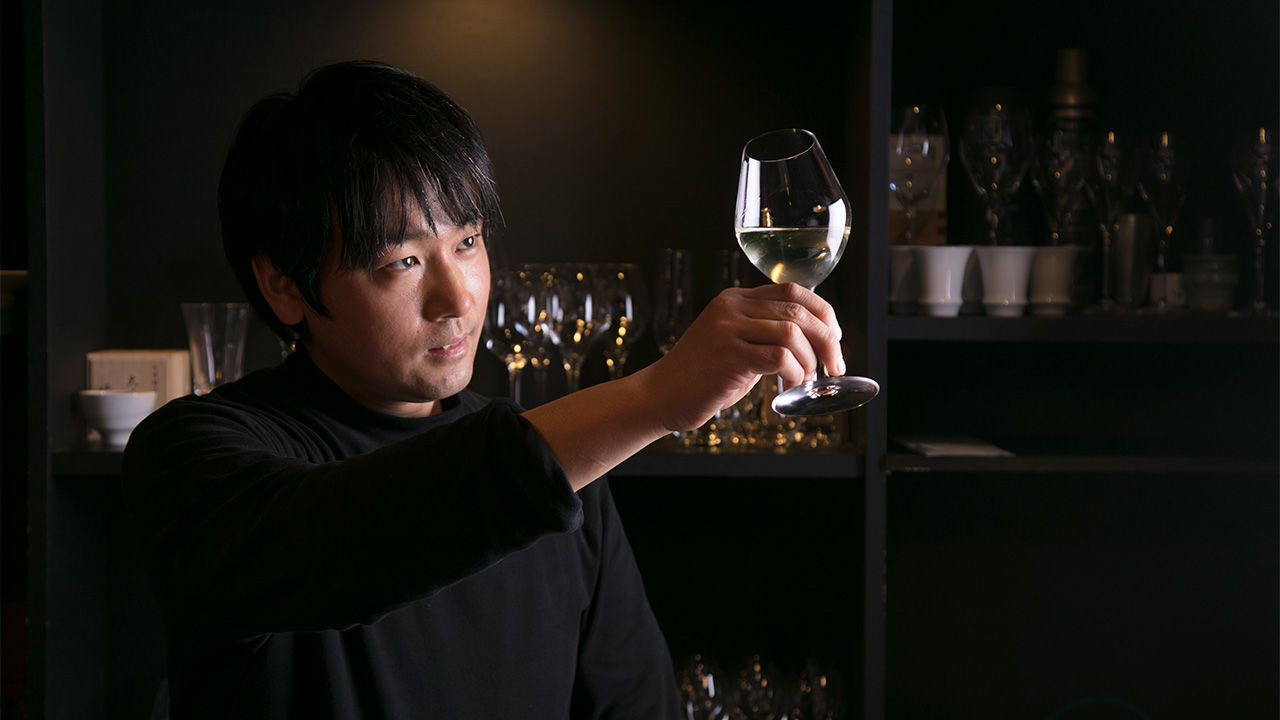 Jul 4, 2018
Bursting from the confines of traditional Japanese culture, today’s nihonshu is rapidly gaining acceptance as a versatile accompaniment to fine food from all corners of the globe. Sandō Atsuko and Miyamoto Shigeharu offer some simple guidelines for pairing sake with Western cuisine, illustrated with examples from Miyamoto’s sake bistro MiwaMiya.

MiwaMiya is a stylish little sake bistro in Tokyo’s Asagaya district, named after the husband-wife team that owns and operates it. Miyamoto Shigeharu, a veteran of the New York restaurant scene, manages the front of the house, while his wife Miwa, a culinary professional trained in French cuisine, presides over the kitchen. Since opening in 2010, the cozy “nihonshu dining bar” has become a popular spot for sake novices and aficionados alike to explore the endless possibilities of nihonshu in a casual setting.

The menu at MiwaMiya features a variety of appetizers and small entrees inspired by the kind of contemporary French cuisine typically served with wine at Parisian bistros. The liquor menu, which changes seasonally, lists about 40 different sakes (sold by the glass) at any given time. When serving his nihonshu, Miyamoto chooses carefully from among eight different drinking vessels of varying shapes, sizes, and materials, taking into account the character of the sake and the accompanying food, as well as the customer’s personal preference. “A wine glass is a good choice when you really want to savor the aroma,” Miyamoto explains. MiwaMiya was among the first establishments in Japan to serve sake in wine glasses.

The Marriage of Nihonshu and Western Cuisine

All well and good, but why serve sake instead of wine at a bistro?

“After working for other establishments for a while, my wife and I decided to start our own business. We wanted to invent a new genre, something no one else had tried,” says Miyamoto. “We’ve always loved French food, and we often dined out at French restaurants. We had noticed a trend toward a lighter brand of French cuisine, without all the butter and fat. We kept thinking, ‘I’ll bet that would taste good with sake.’ Nihonshu is by nature fairly versatile, and these days there are new types of premium sake with higher concentrations of citric and malic acid that give them a crisp, fruity flavor profile. Plus, better refrigeration during storage and shipment has made it possible to maintain that fresh, crisp acidity. So, all in all, it’s become much easier to find sake that goes well with meat and fatty foods.” 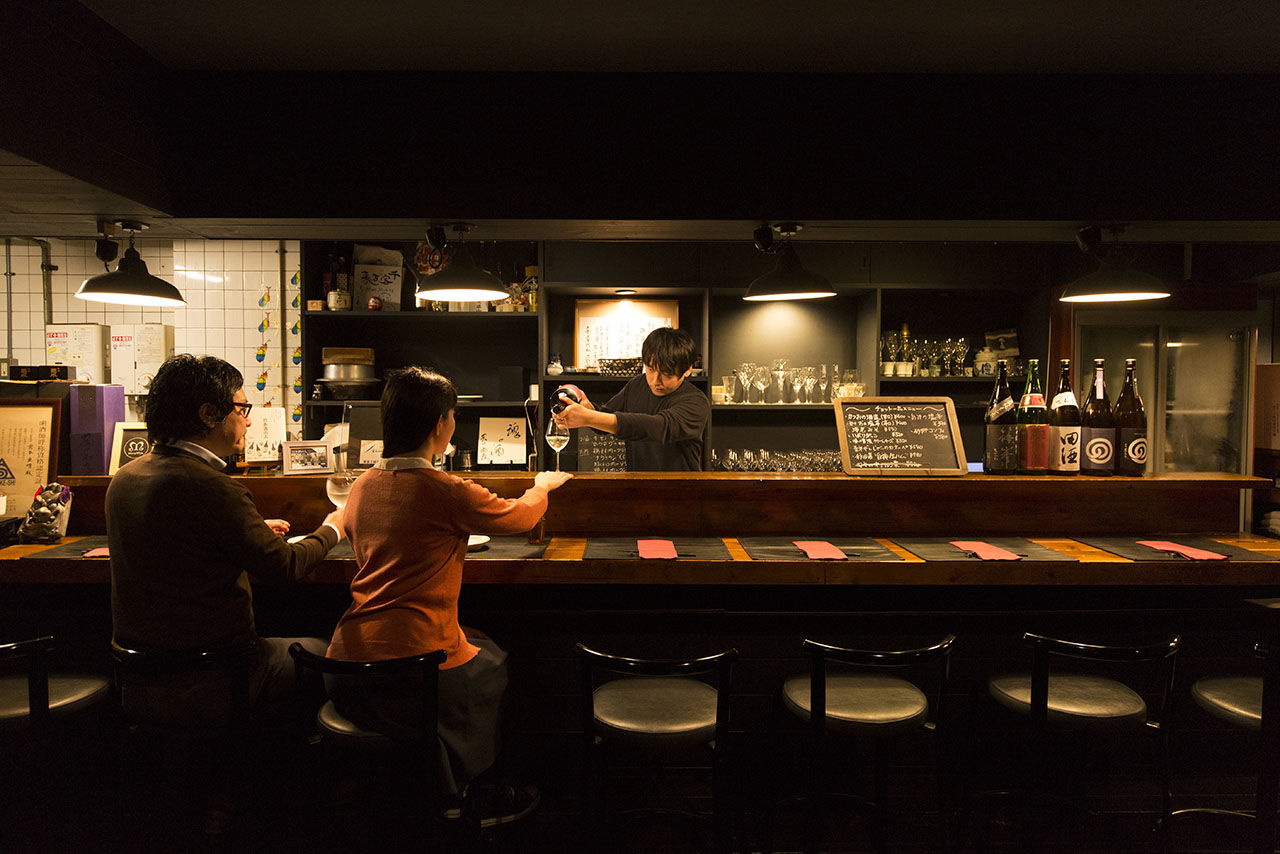 Although difficult to distinguish by sight—most nihonshu is colorless—each sake has its own unique flavor and aroma profile. “Even though sake is made from rice, you often get fruity and floral notes, along with hints of spices, herbs, nuts, and milk,” says Miyamoto. “Sake can be light or full-bodied. It can be dry, mildly acidic like dry white wine, or sweet and tart like fruit juice. Then there’s the mouthfeel, which can be light, silky, or effervescent. There’s really tremendous variety.”

Nihonshuis also flexible. A fine sake can be enjoyed either on its own or as an accompaniment to food. “Nihonshu has the power to bring out the subtle flavors and aromas in a dish,” says Miyamoto. “It can play up the dish’s strengths and minimize potential issues, like the smell of raw fish. It can also tie together different elements.”

The basic rule of pairing is to match bold with bold, delicate with delicate, fruity with fruity, and so forth. That’s a good rule-of-thumb, agrees Miyamoto. “But sometimes I’ll deliberately pick a sake with a contrasting flavor and aroma profile and use it as an accent, much as one would add a piquant sauce to finish off a dish.”

The proof of the pudding, as they say, is in the eating. We sampled three of the bistro’s signature dishes, each paired with a sake of Miyamoto’s choosing.

The meal begins with an onion mousse, a cool, foamy appetizer whipped up from onion puree and cream and topped with a tomato gelée. Miyamoto pairs this starter with Aramasa 2016 Ecru (Aramasa Shuzō, Akita Prefecture), a junmai-shu brewed by the old labor-intensive kimoto(*1) method. “True to the name ‘Ecru,’ this sake has a natural, low-key elegance, like unbleached linen. On the boldness-delicacy scale, it’s a good match for the creamy, off-white onion mousse, with its subtle umami. The tomato gelée topping the mousse adds just the right ‘pop’ of acid, which balances the refined acidity of this nihonshu.” The sake is served chilled, at a temperature of 10°C–12°C, to complement the cold appetizer.

To this taster, the pairing seemed like a match made in heaven. The subtle flavors and aromas blended seamlessly, leaving no cloying aftertaste. It was as if the food and sake merged to create a single self-contained flavor fantasy that blossomed and then vanished without a trace. Next comes a salmon carpaccio paired with Kuheiji 2016 Eau du Desir (Banjō Jōzō, Aichi Prefecture), a junmai daiginjō made from Yamadanishiki rice. This label, well known for its compatibility with Western food, appears frequently on the wine lists of Parisian French restaurants. “It has a clean, crisp acidity that cleanses the palate when paired with meat, dairy, or dishes with olive oil. That and the balance of acid, sugar, and umami have made it a favorite of French chefs. I personally think this sake is more easily paired with Western food than Japanese cuisine,” comments Miyamoto.

Kuheiji Eau du Desir is remarkably fruity for a beverage brewed from rice, but the overall effect is elegant and refined. “When served with the salmon carpaccio, it counteracts the raw-fish smell while bringing out the umami. It also works well with the dressing, tying together the fruit and vegetable fragrances of dekopon [citrus], strawberry,and microgreens, while adding its own note of pear to the mix.” Eau du Desir is a natural for pairing with lighter French dishes. With the final pairing, we venture into the realm of big, bold flavors. The third course is duck leg confit, accompanied by root vegetables and Brussels sprouts and a drizzle of rich, velvety brown sauce—an assertively savory, aromatic dish. Miyamoto goes with an unconventional choice, Yamamoto “Montrachet” French Oak Barrel–Aged junmai ginjō (Yamamoto Gōmei, Akita Prefecture), brewed with Chardonnay yeast and aged for 10 months in old French barrels previously used to age Chardonnay from the Montrachet vineyards of Burgundy. “This is one of those pairings where the juxtaposition of two strong, distinct personalities produces a synergy that accentuates the umami.” Far from clashing, the vanilla notes of the oak-aged sake provide a perfect foil for the aroma of crispy browned duck skin. None of these combinations of nihonshu and European-style cuisine seemed forced. In each case, the sake and the food enhanced one another, creating a total taste experience that was greater than the sum of its parts.

“I’m not laying down any rules, just offering some examples,” stresses Miyamoto. “Everyone should feel free to try out different combinations at home. Don’t worry about making a mistake. With today’s versatile nihonshu, you can’t go too far wrong.” Haute cuisine is not a prerequisite. Experiment with cheese and crackers, tofu sauteed in olive oil, or other simple snacks, and discover your own pairing sensations!

Kimoto is an older method of preparing the yeast starter (moto) used to start fermentation. Today, most sake brewers add commercially available lactic acid to the mixture to prevent the growth of unwanted microorganisms. The kimoto method, perfected in the Edo period (1603–1868), relies on lactobacilli in the environment to produce lactic acid naturally. This process takes anywhere from 30 to 40 days, or more than twice as long as the conventional method.