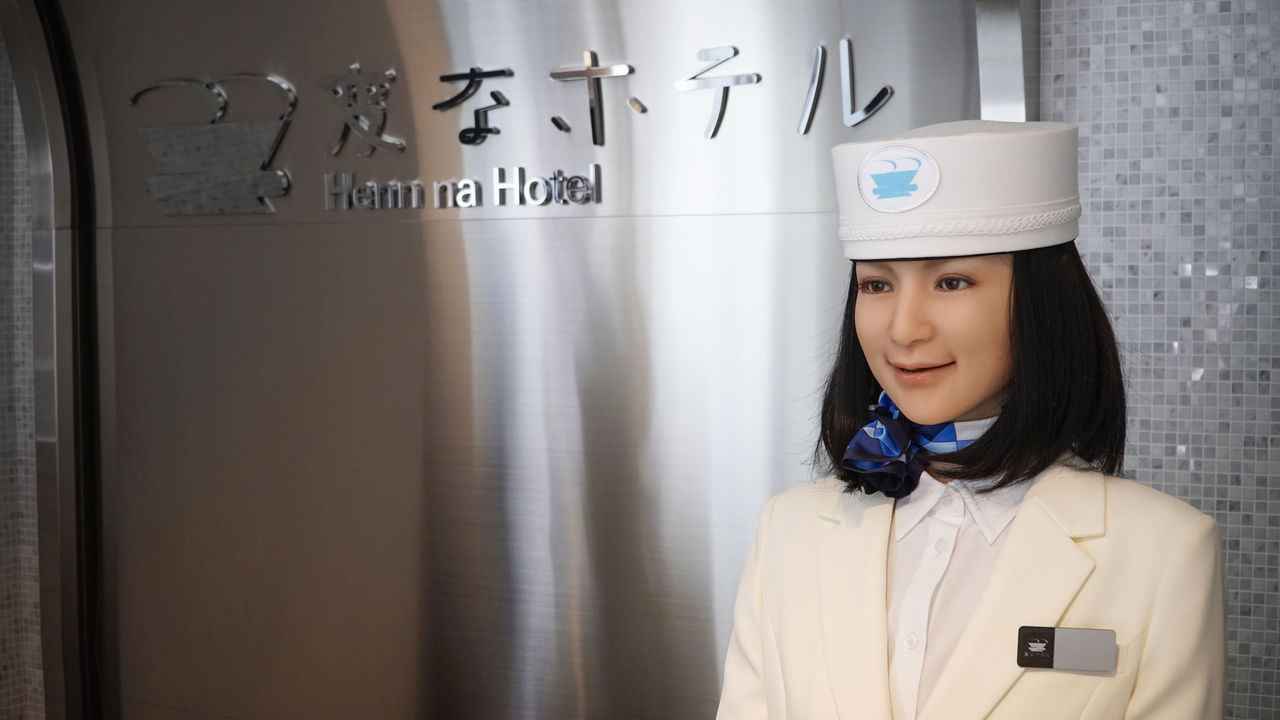 Robots to the Rescue in the Hotel Industry?

Smiling female staff stand at the front desk counter. But all is not as it seems. These are, in fact, robots, made with strict attention to detail. You are standing at the entrance to Henn na Hotel Tokyo Hamamatsuchō, which had its grand opening in April 2018. 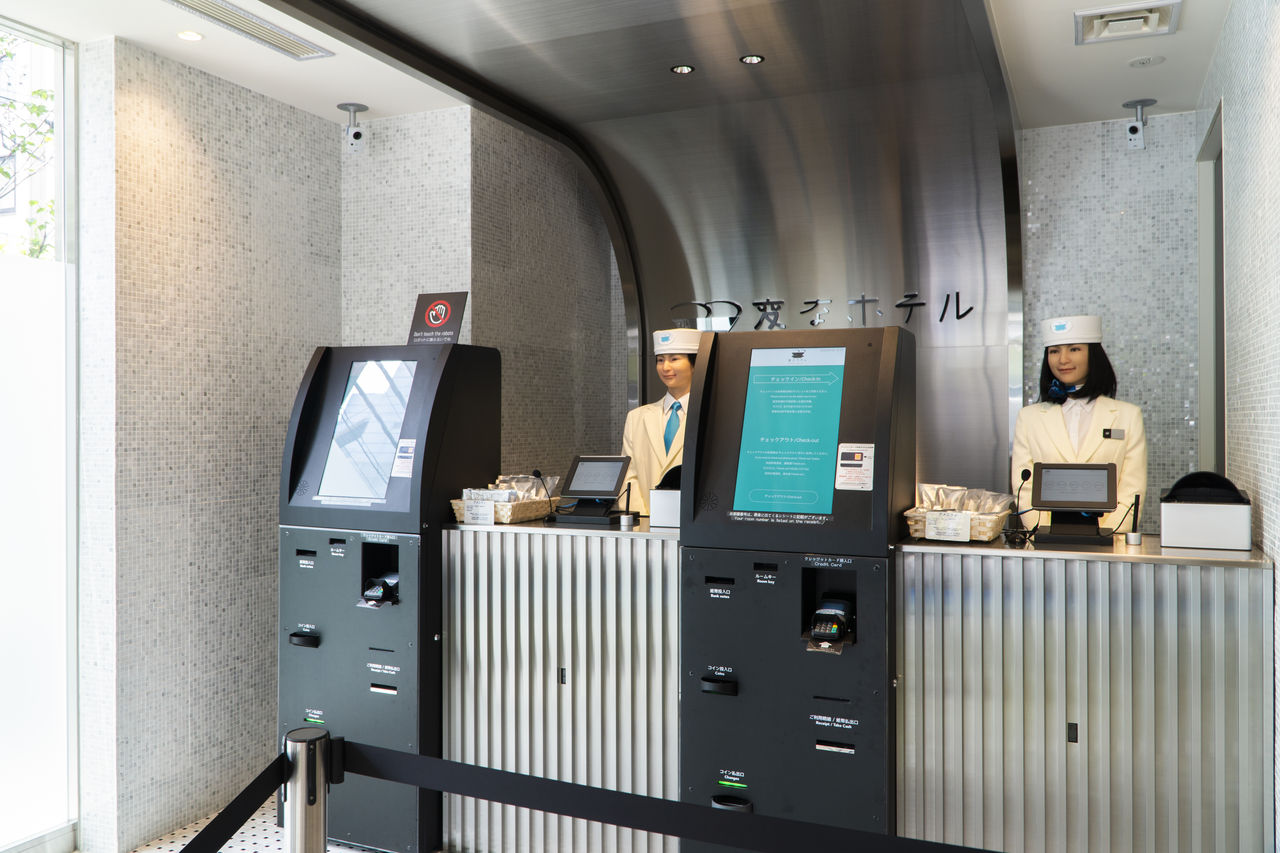 The Henn na Hotel chain is known for welcoming visitors with robot dinosaurs. The Guinness Book of World Records lists the chain as the first in the world to be staffed by robots. H.I.S. Hotel Holdings currently operates nine such hotels in Japan, with preparations underway to open three more before the start of 2019. The types of robots vary from place to place. For example, robot velociraptors, known as a highly intelligent type of dinosaur, staff the front desk at the Henn na Hotel Maihama Tokyo Bay, in Urayasu, Chiba. These robot dinosaurs bow to visitors, and even occasionally sneeze, making them seem both peculiar and charming.

“Most of the Maihama branch customers are Tokyo Disneyland visitors,” says Miura Tatsuki, executive in charge of the public relations office of the business management planning division at H.I.S. “And staying at an impersonal hotel either before going to, or coming back from, an amusement park puts a damper on what is supposed to be a good time. So we put robot dinosaurs in the facilities and robots based on fossil fish to swim in a fish tank. While some kids are scared and cry at first, soon they’re smiling and having their pictures taken with these robots.” 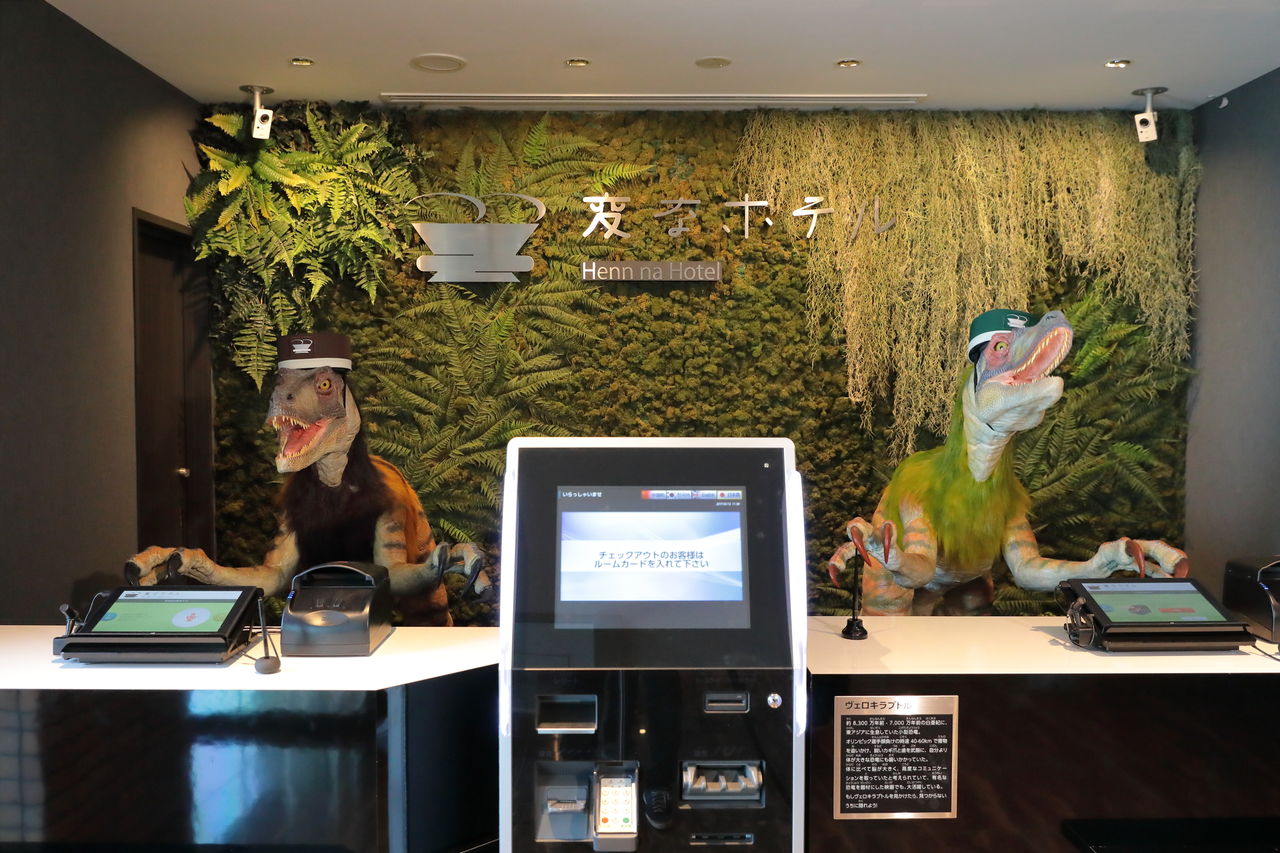 The Henn na Hotel concept originated in 2015, with the large-scale renovation of a hotel at the Huis Ten Bosch theme park in Sasebo, Nagasaki Prefecture. Originally staffed by some 40 employees, the increased use of robots have made it possible to operate the 144-room hotel with only 7 human employees instead.

“We initially adopted robots with the aim of holding labor costs down,” says Miura. “But then, the robots became an attraction in their own right, adding to the entertainment and drawing popular attention. The Henn na Hotels are rated at three to three-and-a-half stars—not as high as might be hoped—so performances by these robots can add real value to customers’ stays.” 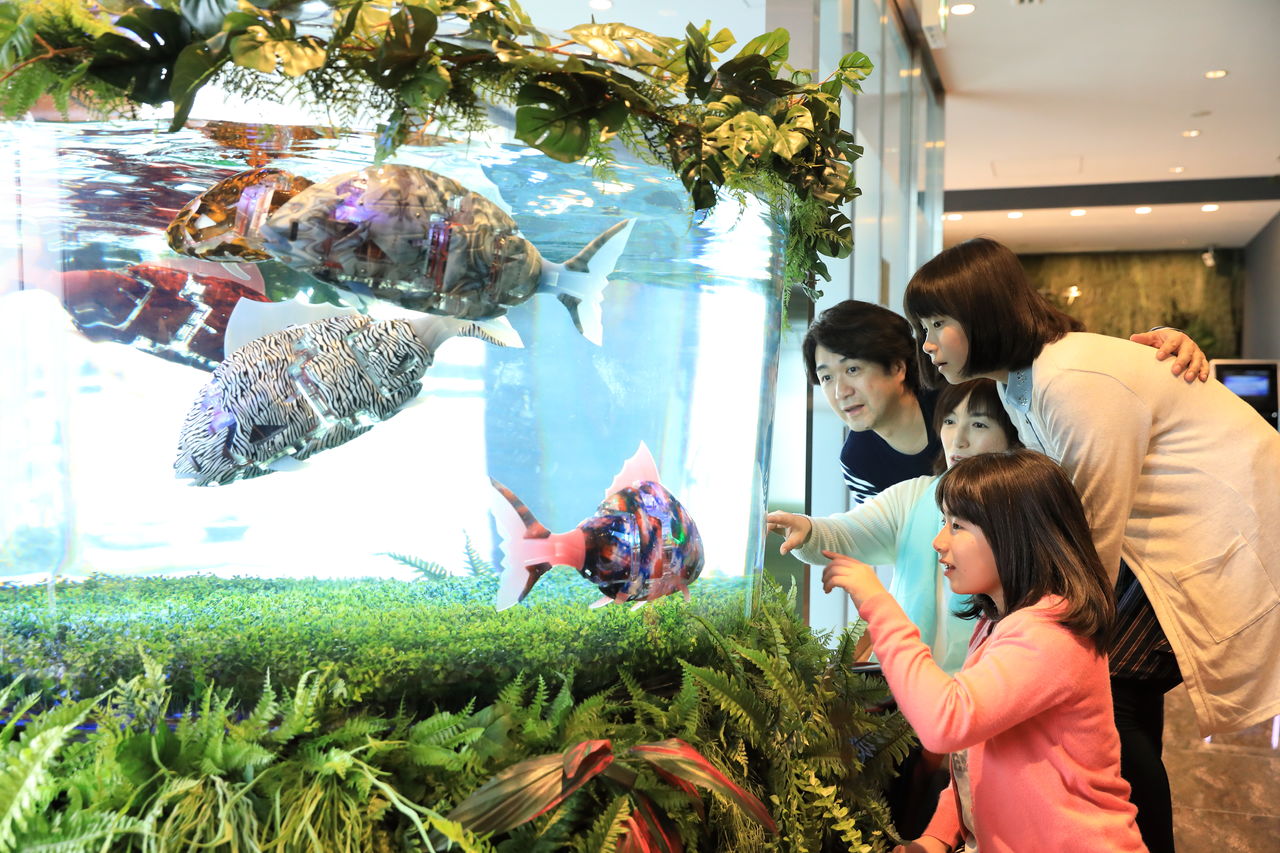 Robots enable efficient management of these hotels with a small staff, in addition to offering enhanced entertainment value. In one sense, this is an ideal made real for the Japanese hotel industry, where the labor shortage is particularly acute. The first such hotel opened with 82 robots of six types, and development has continued as more such hotels have opened for business, so that now there are nearly 300 robots of 30 types. 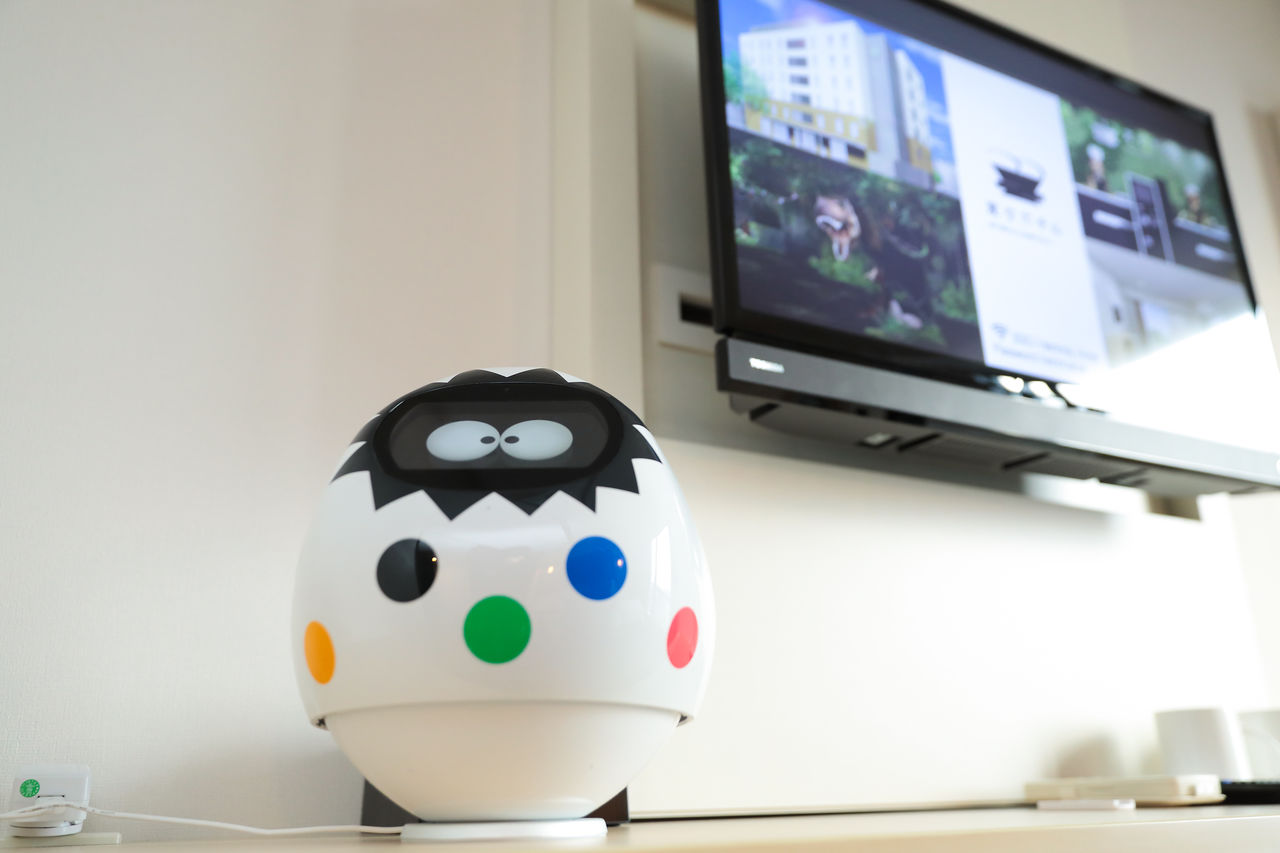 Tapia, an interface robot, is installed in every room. It operates various features on voice command, including the TV, air conditioner, and lights. (Photo courtesy of Henn na Hotel Maihama Tokyo Bay)

Beginning in late 2017, the ever-evolving Henn na Hotel chain has been opening hotels catering to business travel. One of these is Henn na Hotel Hamamatsuchō, which is easy to get to from both Tokyo Station and Haneda Airport. At a glance, it looks like any other typical Japanese business hotel. If not for its sign, people likely would have no idea from its outward appearance that this hotel is staffed by robots. 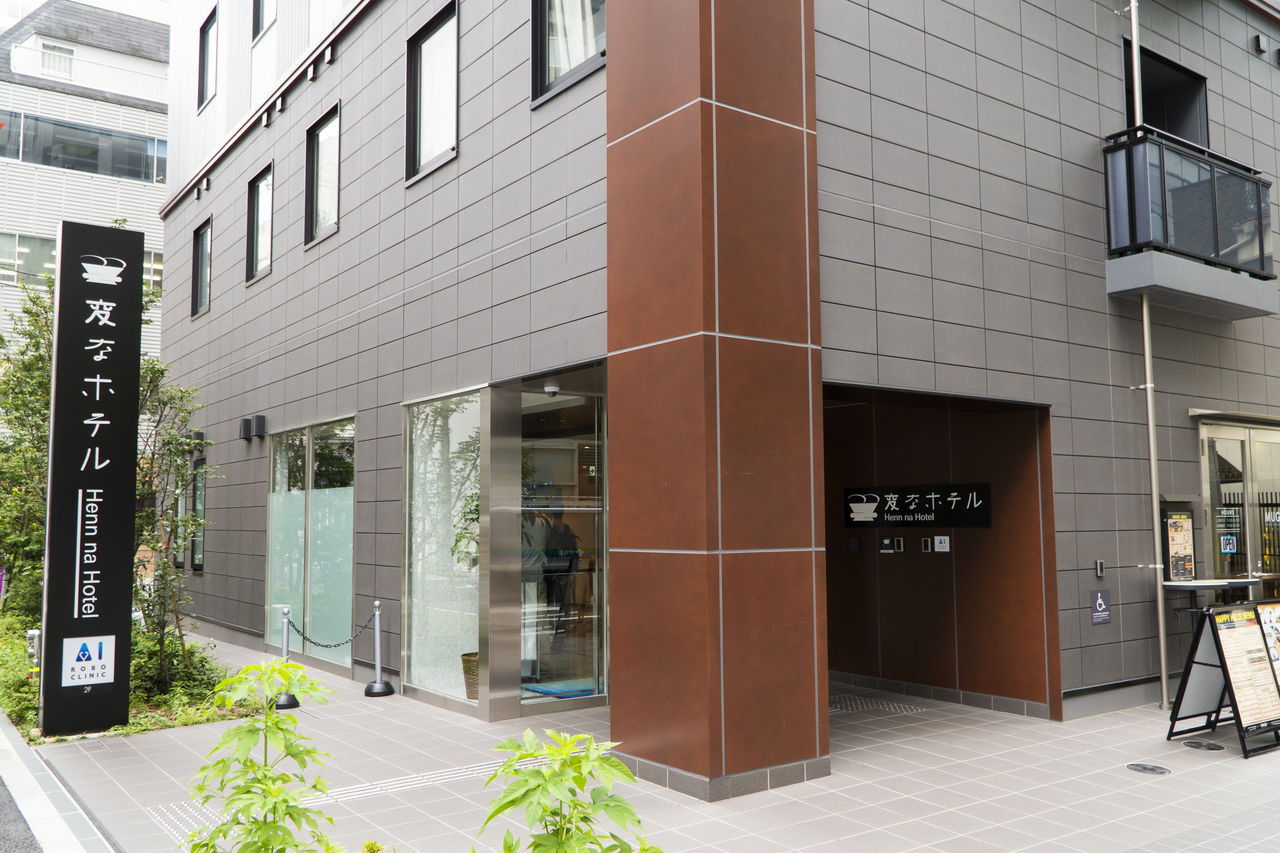 Two uniformed robots, one male, one female, staff the front desk. They speak a greeting and guide guests through check-in procedures, in which the guests speak their names and enter their phone numbers on touch panels. Foreign travelers place their passports in a scanner. Finally, all guests sign their names. Payment is made by cash or credit card using the payment machines provided, whereupon receipts and keys bearing the room numbers are issued.

Foreign visitors are catered to as well, with support for English, Korean, and Chinese (both simplified and traditional) provided in the front desk interfaces. Live human staff are also standing by if needed. 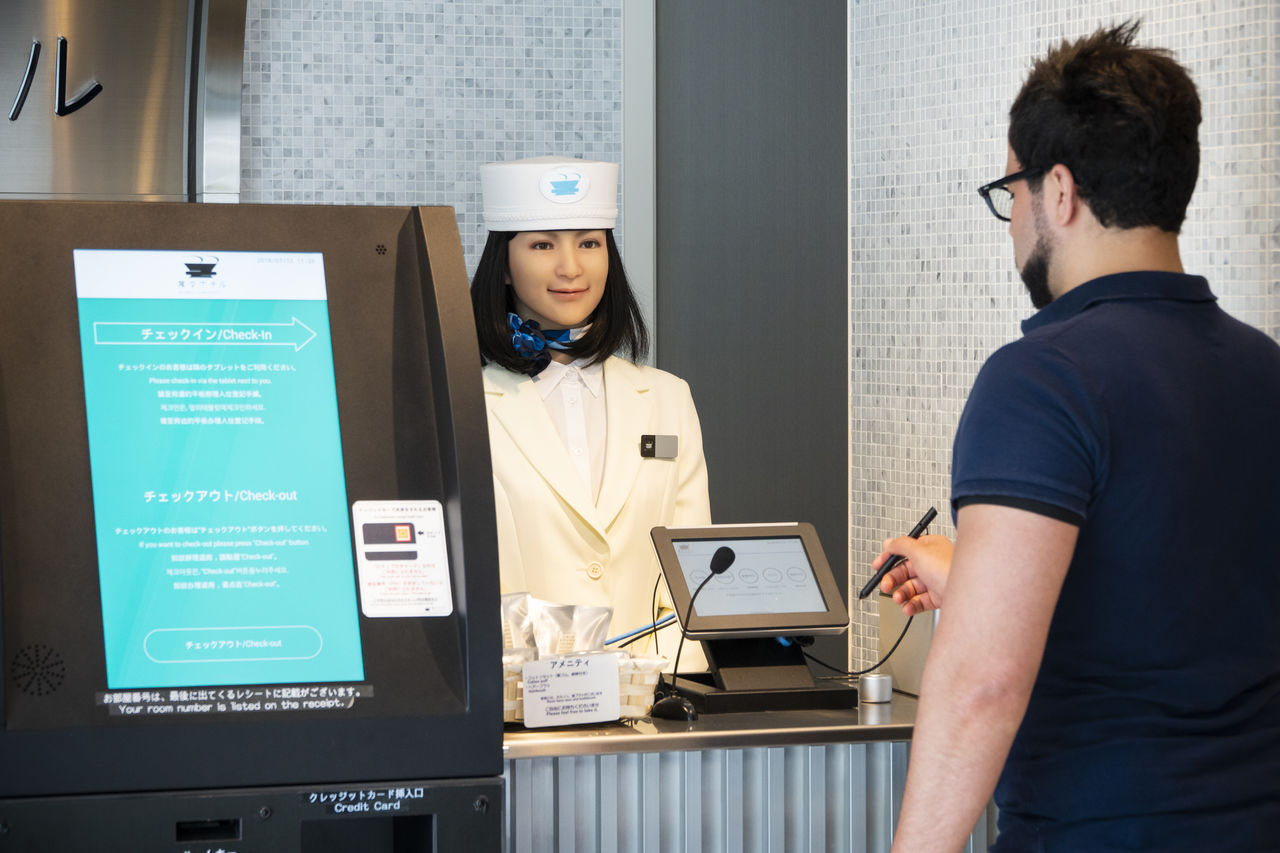 Voice recognition and touch panels make checking in a breeze.

“It takes a surprising amount of energy to talk to people, even hotel staff,” says Miura. “We figure this is going to be just that much harder for a businessman to take after wearing himself out in negotiations or other business meetings. And we thought, how can we leverage the characteristics of robots for business travelers as well as tourists? Now, at Henn na Hotel, you can go your whole stay, from check-in to check-out, without ever talking to another person.” 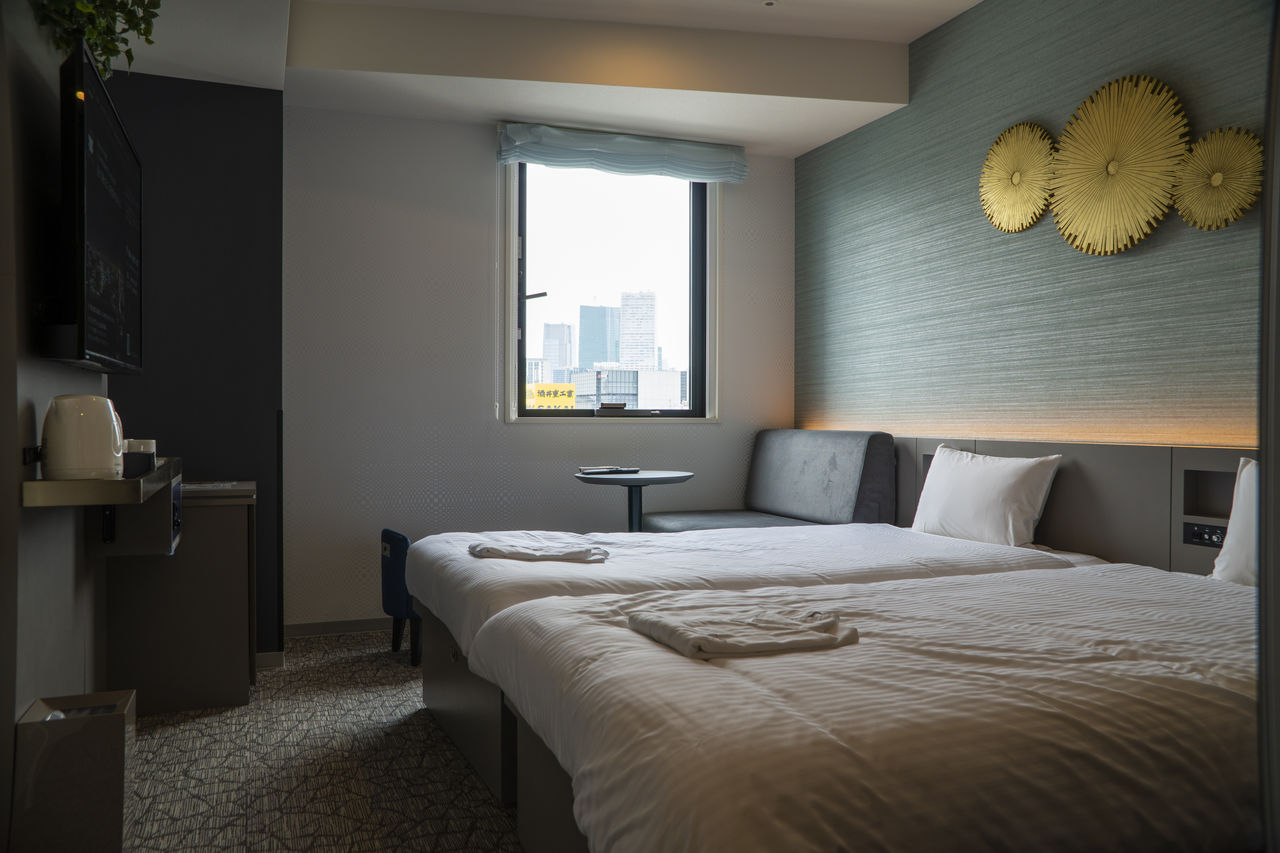 The hotel features clean, comfortable rooms, some of which afford views of Tokyo Tower.

Other robots are on staff here as well. Next to the male and female front-desk humanoid robots is the charming Unibo, a robot concierge that is capable of simple conversation. Unibo assists guests with finding nearby restaurants, supermarkets, and convenience stores. 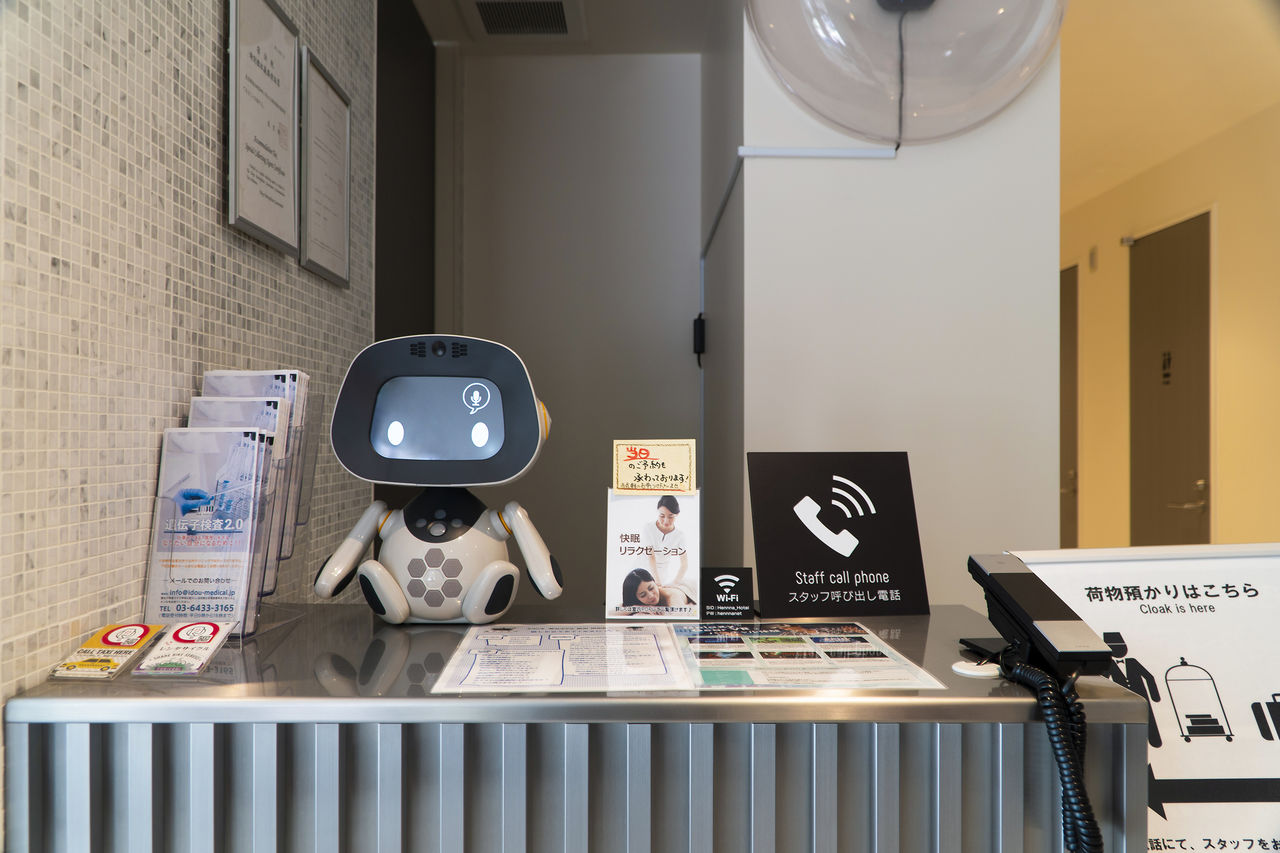 With its extensive local knowledge, Unibo is a helpful concierge. A phone for calling human staff is nearby as well.

While not as entertaining as the Maihama or Huis Ten Bosch hotels, the rooms at the Hamamatsuchō hotel come equipped with numerous features for business travelers, with the concepts of health, a good night’s sleep, and near-futurism in mind. The signature feature in this regard is LG Styler, a clothes-cleaning appliance installed in every room. Put a suit or other article of clothing on a hanger in the cabinet, press a button, and with hot steam and vibrations, the unit smooths out wrinkles and removes smells, dust, and pollen. Tourists and businesspeople alike are sure to appreciate it. 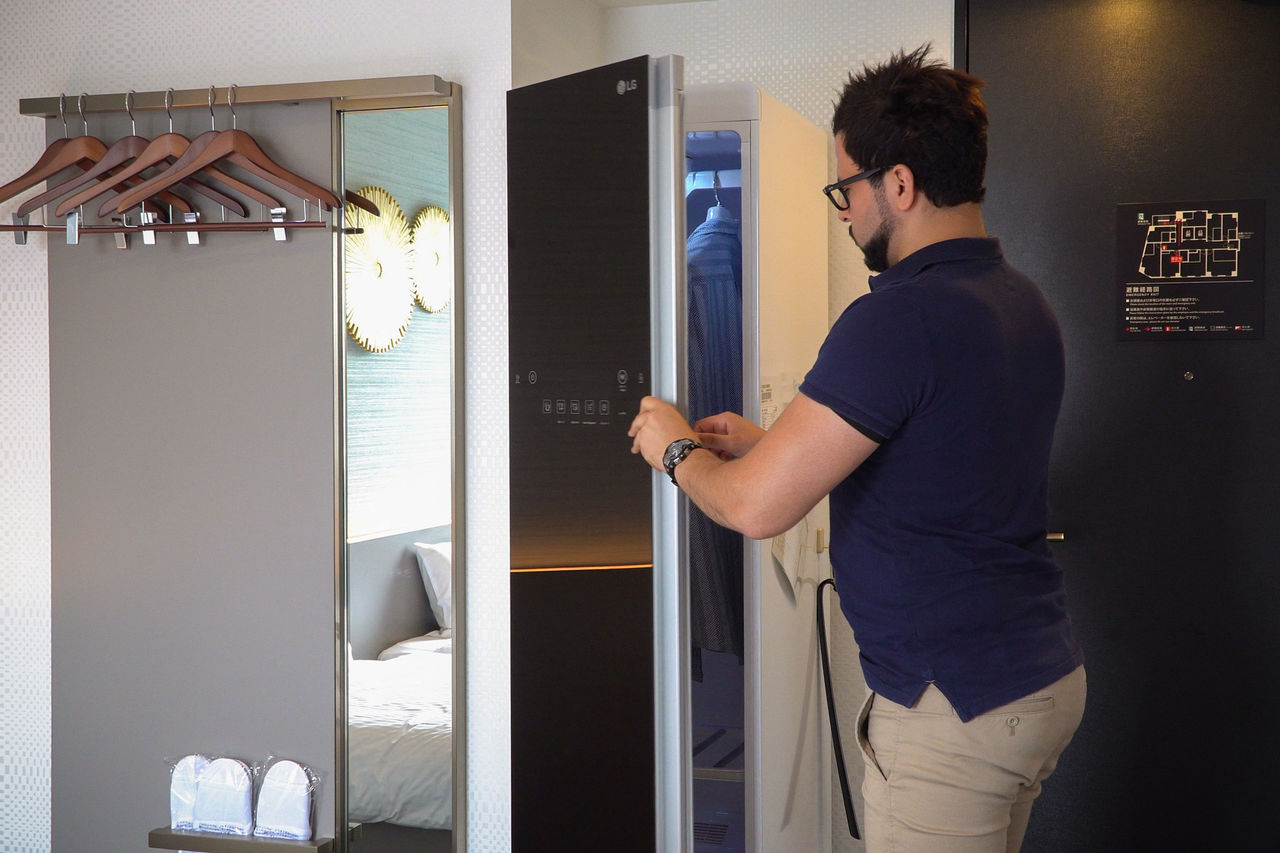 Another feature installed in every room is Handy, a smartphone that doubles as a remote control for the TV and air conditioner, as well as providing free domestic and international telephone service. Each room also comes with a Smart Plate, which displays tourism information and computer games alike on the smartphone screen when the device is waved over it. 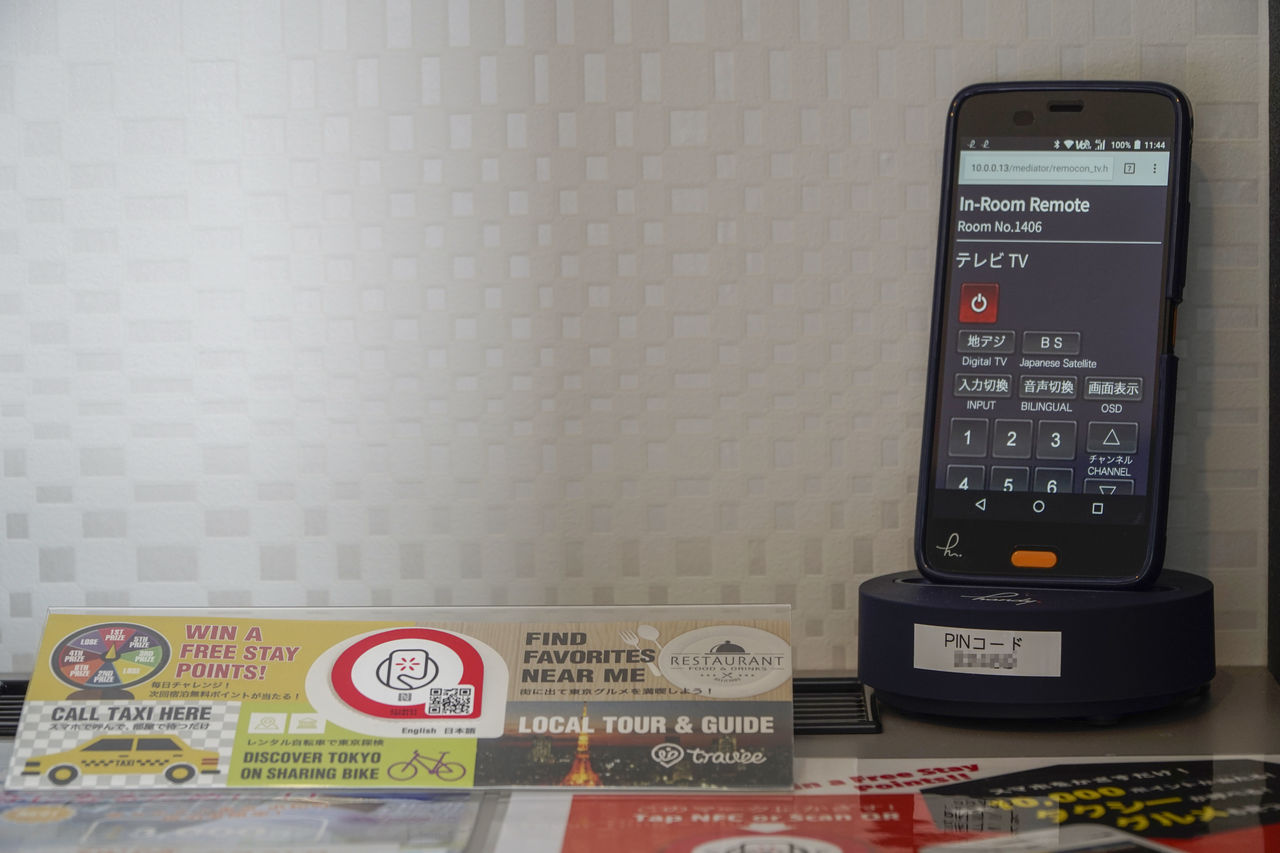 “The ‘Hen’ in ‘Henn na Hotel’ can mean ‘strange’ in Japanese,” says Miura. “It can also mean ‘change,’ though, and this latter meaning is the one we have in mind.” It should be interesting to see what future advances Henn na Hotel will make as it employs cutting-edge technology in its ongoing change and evolution. 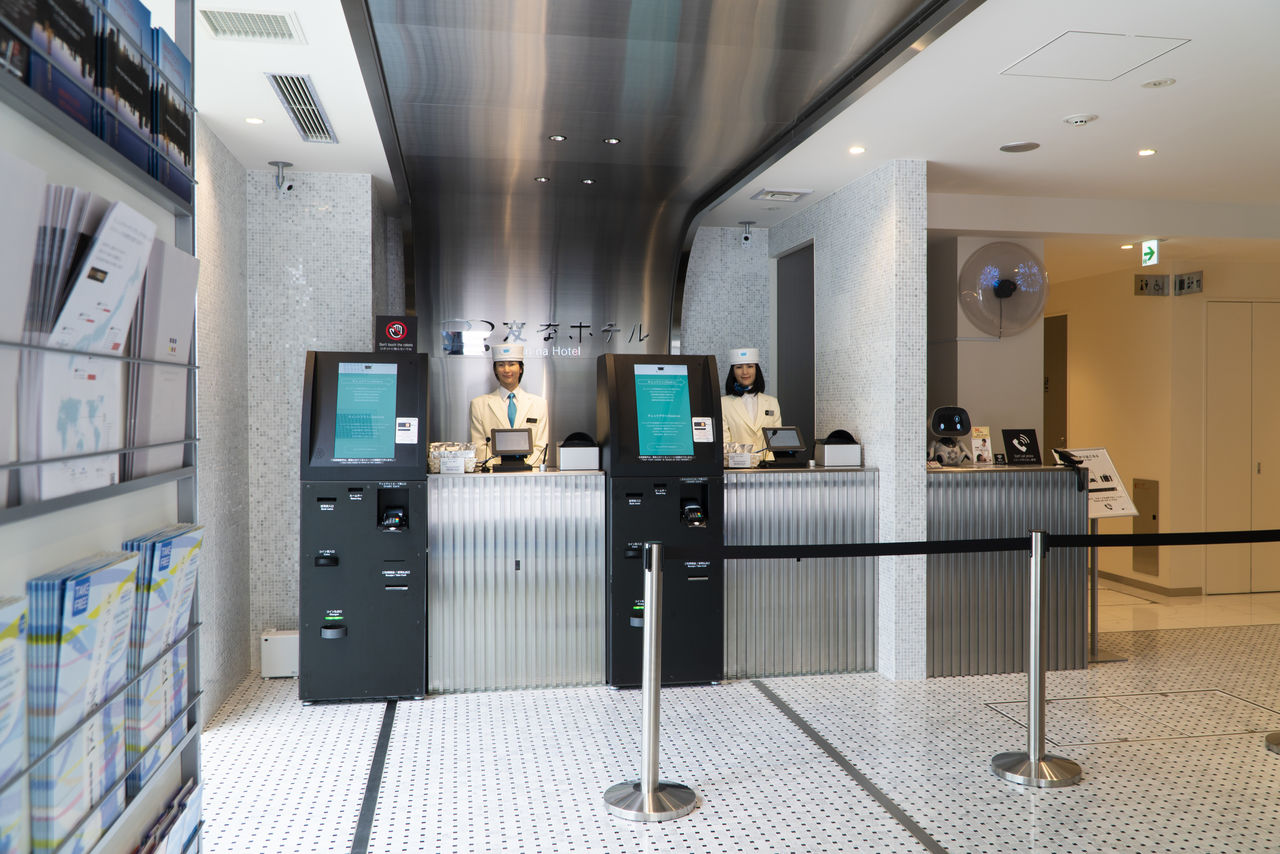