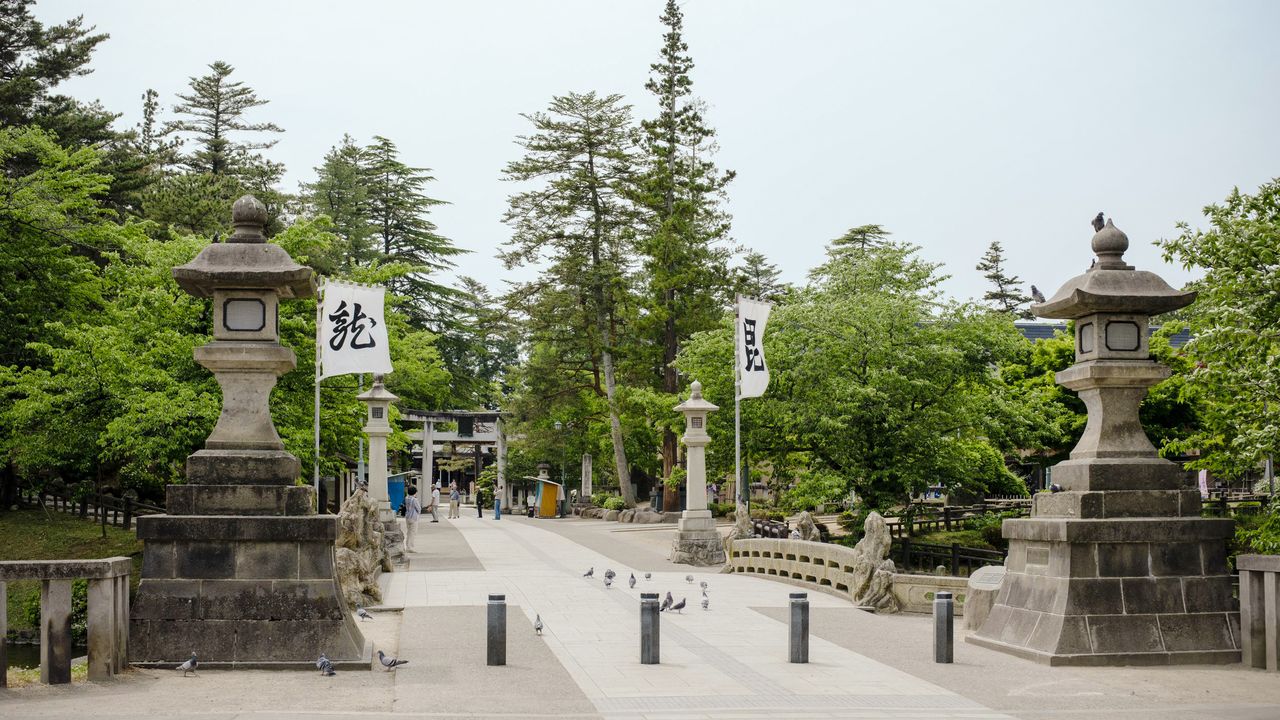 History Travel May 29, 2020
Yonezawa in Yamagata Prefecture was once a thriving castle town ruled by the Uesugi warrior clan. Visitors to the city can enjoy its historic sites and surrounding natural beauty.

The Okitama region in southern Yamagata Prefecture has long been known for its natural beauty and abundant agriculture. Famed British traveler Isabella Bird lavished praise on the area when she visited during her journey through Japan in 1878, proclaiming it an “Asiatic Arcadia.” Today, visitors are still drawn by the picturesque scenery that includes rolling fields of rice, the towering peak of Mount Nishiazuma, and the meandering waters of the Mogami River.

Okitama rose to political importance as an agricultural center in the late Heian Period (794–1185). The main settlement, the castle town of Yonezawa, is said to have been established in the thirteenth century, although it was not until the latter part of the Muromachi period (1333–1568) that the region really began to flourish.

The influential Date clan occupied Yonezawa for centuries, starting in 1380; Date Masamune (1567–1636), the celebrated first daimyō of the Sendai domain, is said to have been born on the castle grounds. However, it is the Uesugi clan that is associated with Yonezawa’s later history.

The most famous member of the family, the powerful warrior Uesugi Kenshin (1530–78), ruled Echigo province in what is modern-day Niigata Prefecture. His successor Kagekatsu (1556–1623) also rose to prominence, but setbacks on the battlefield forced him to relinquish his political ambitions.

After taking charge of the clan, Kagekatsu came under pressure from forces loyal to Oda Nobunaga during the warlord’s campaign to unify the nation. Following Nobunaga’s death in the Honnōji Incident in 1582, Kagekatsu went on to become an influential general under Nobunaga’s successor, Toyotomi Hideyoshi. His participation in Hideyoshi’s Siege of Odawara and invasion of the Korean Peninsula earned him appointment as lord of the wealthy province of Aizu. However, his fortunes shifted when he sided with the losing forces in the lead up to decisive Battle of Sekigahara in 1600, and he was relegated by shōgun Tokugawa Ieyasu to the much smaller Yonezawa domain. Kagekatsu entered the castle town in 1601, starting the Uesugi clan’s rule over the province that would continue for some 270 years. 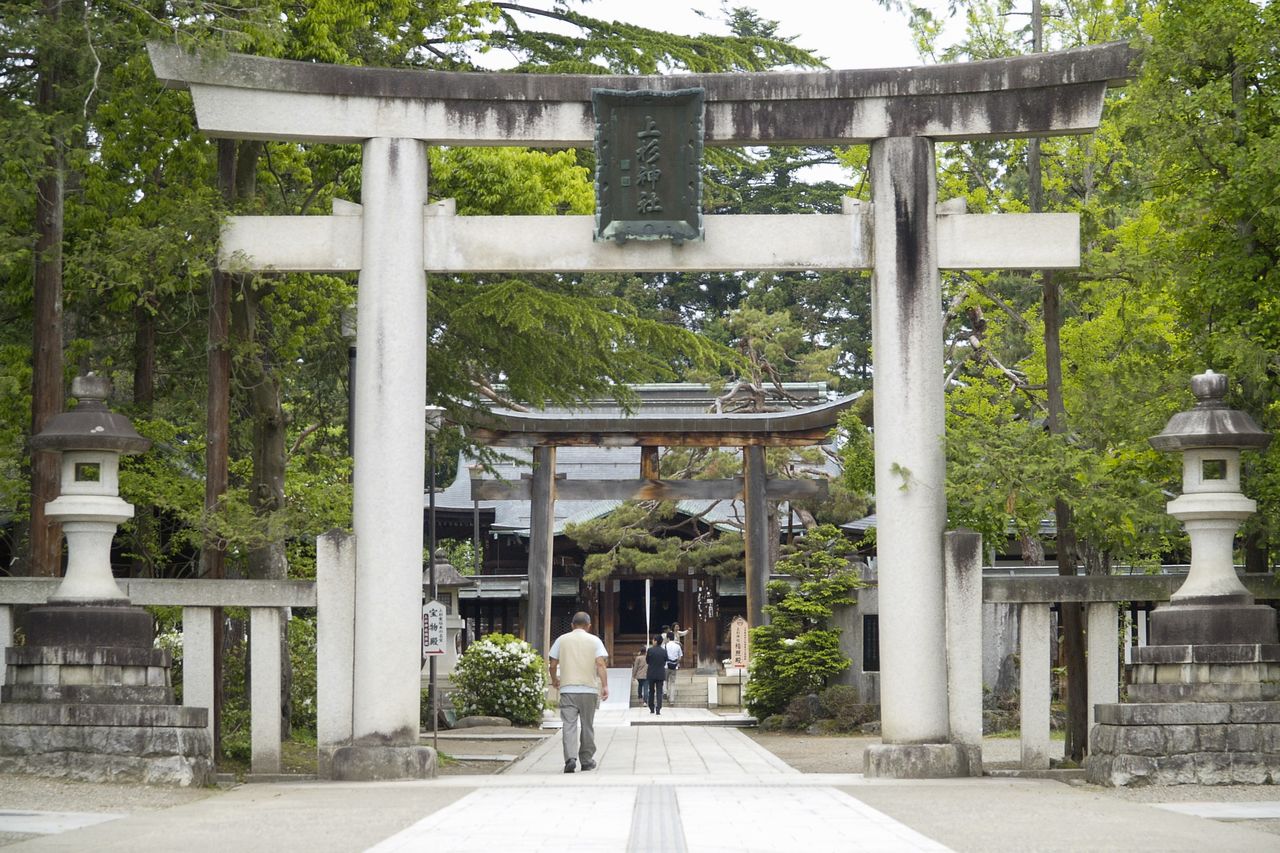 Giant torii mark the entrance of the Uesugi Shrine on the old grounds of Yonezawa Castle. (Courtesy of the Yonezawa Tourism Convention Association) 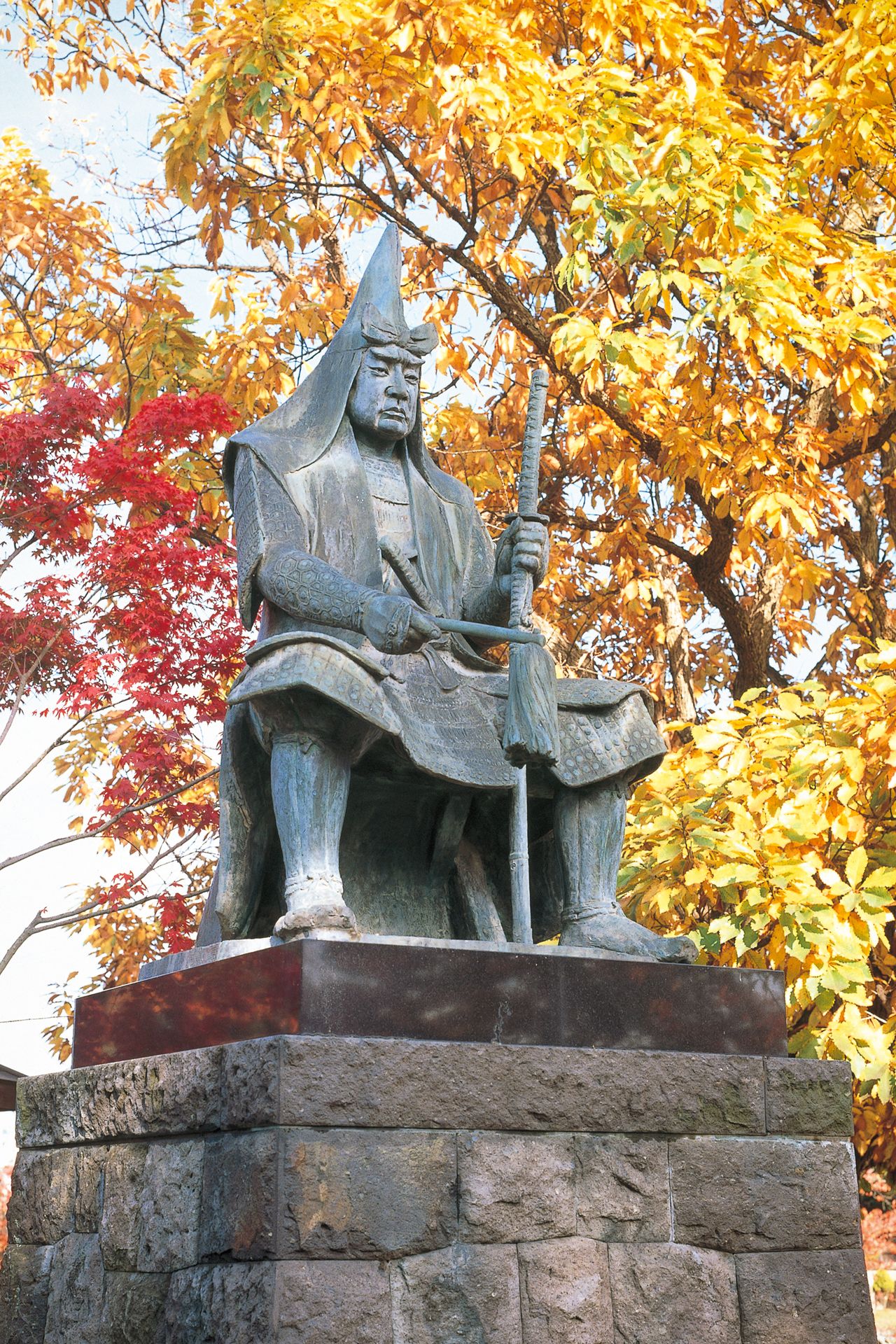 A bronze statue of Uesugi Kenshin on the grounds of the Uesugi Shrine. (Courtesy of Yamagata Prefecture)

Yonezawa Castle—also known as Matsugasaki-jō—stood until 1873. Shortly after the new Meiji government abolished the traditional domains and replaced them with modern prefectures, it was demolished and the grounds turned into Matsugasaki Park. Later, the Uesugi Shrine was built on the site of the honmaru, the castle’s main compound, to enshrine the spirits of Kenshin and the ninth Yonezawa lord, Uesugi Yōzan (1751–1822). The shrine was promoted in 1902 to a status securing it support from the Imperial Household Agency, and is now dedicated only to Kenshin. 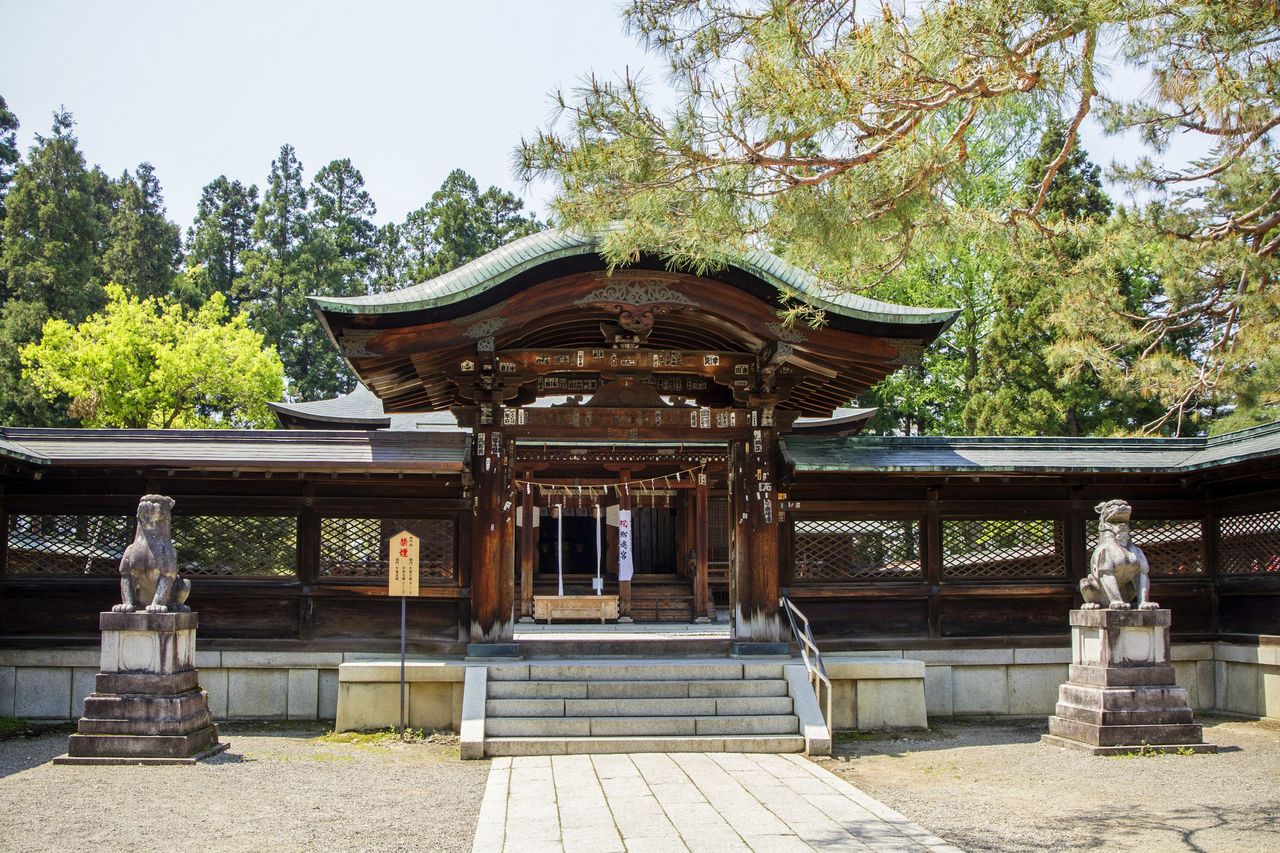 The main hall of the Uesugi Shrine. (Courtesy of the Yamagata Tourist Association)

Visitors reach the shrine along a paved sandō—the “worshipper’s path”—that spans the old castle moat and passes by a statue of Kenshin and other monuments to the warrior before plunging into a small forested area where the main keep once stood.

The main hall, or honden, of the shrine, built in 1923, was designed by the acclaimed architect and Yamagata native Itō Chūta (1867–1954), who also drew the plans for such religious buildings as the Shintō shrine Meiji Jingū and the Buddhist temple Tsukiji Honganji, both in Tokyo. The Keishōden, the shrine museum, next to the honden houses artifacts related to the history of the Uesugi clan, including the armor and helmet of Kenshin’s vassal Naoe Kanetsugu (1559–1620) that famously has a front piece emblazoned with the kanji ai (愛), meaning love.

Uesugi Shrine attracts a wide array of parishioners for events like hatsumōde (the first visit of the New Year), weddings, and the blessing of newborn children (a ceremony known as miyamairi). Visitors also come to admire the natural surroundings, including the some 200 cherry trees that blossom each spring. 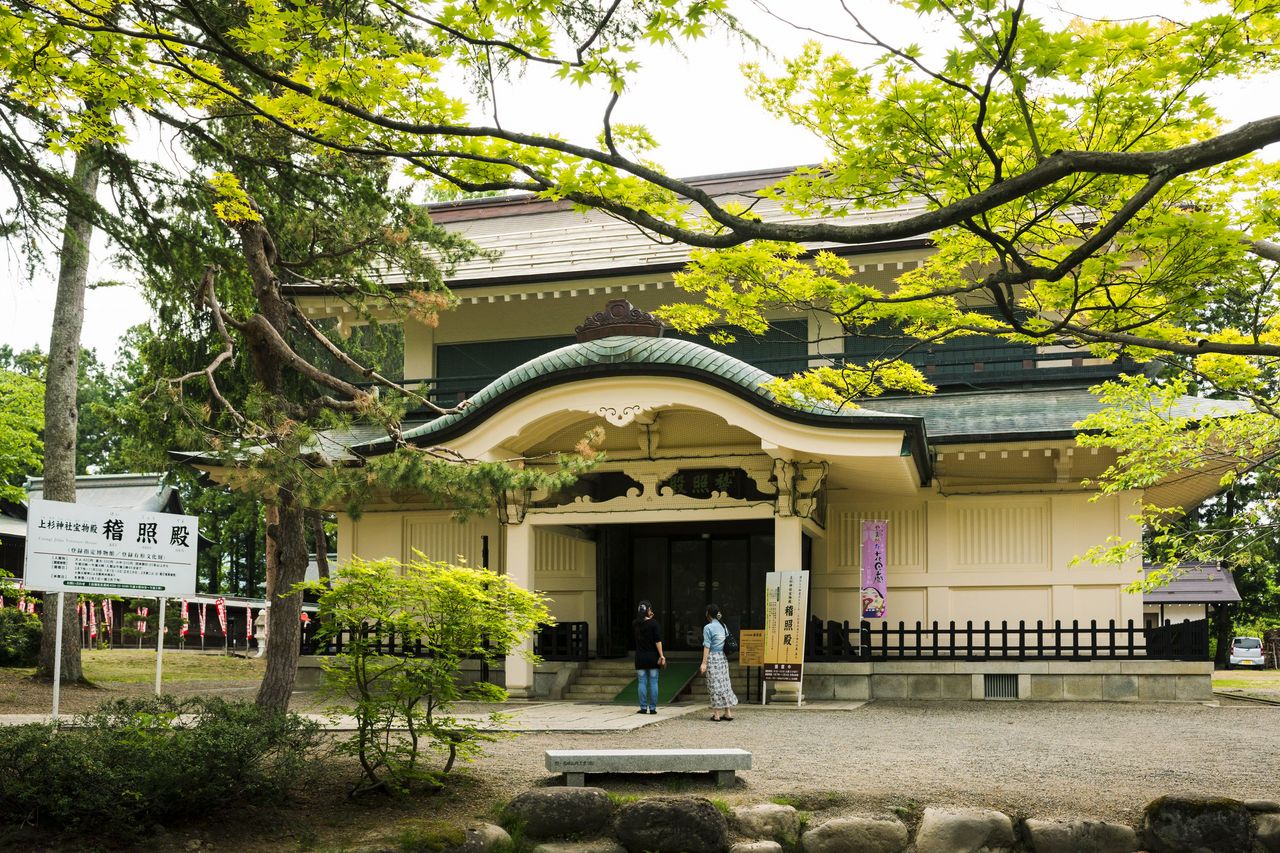 The Keishōden first opened its doors in 1923. (Courtesy of the Yamagata Tourist Association)

Another Shintō site related to the Uesugi clan is Matsugasaki Shrine, which enshrines the spirits of two family heads—Yōzan and Kagekatsu—and Naoe Kanetsugu.

Yōzan (1751–1822) is known not for his battlefield exploits, as his predecessors were, but as a fiscal reformer. He became daimyō of Yonezawa in the latter part of the Edo period (1603–1868), inheriting a domain that was in dire financial straits. He instituted austerity measures, boosted education by reopening the clan school, known as the Kōjōkan, and fostered new industries like silk production and textiles. The success of these efforts are believed have saved the domain from the worst effects of a prolonged famine during the Tenmei era (1781–89) that devastated parts of the country and claimed some 900,000 souls.

The stoical Yōzan coined a number of well-known Japanese sayings that are still cited today and even won admiration in the West—US President John F. Kennedy purportedly among them—when his story was included among five biographies presented in Uchimura Kanzō’s work Daihyōteki Nihonjin (trans. Representative Men of Japan). 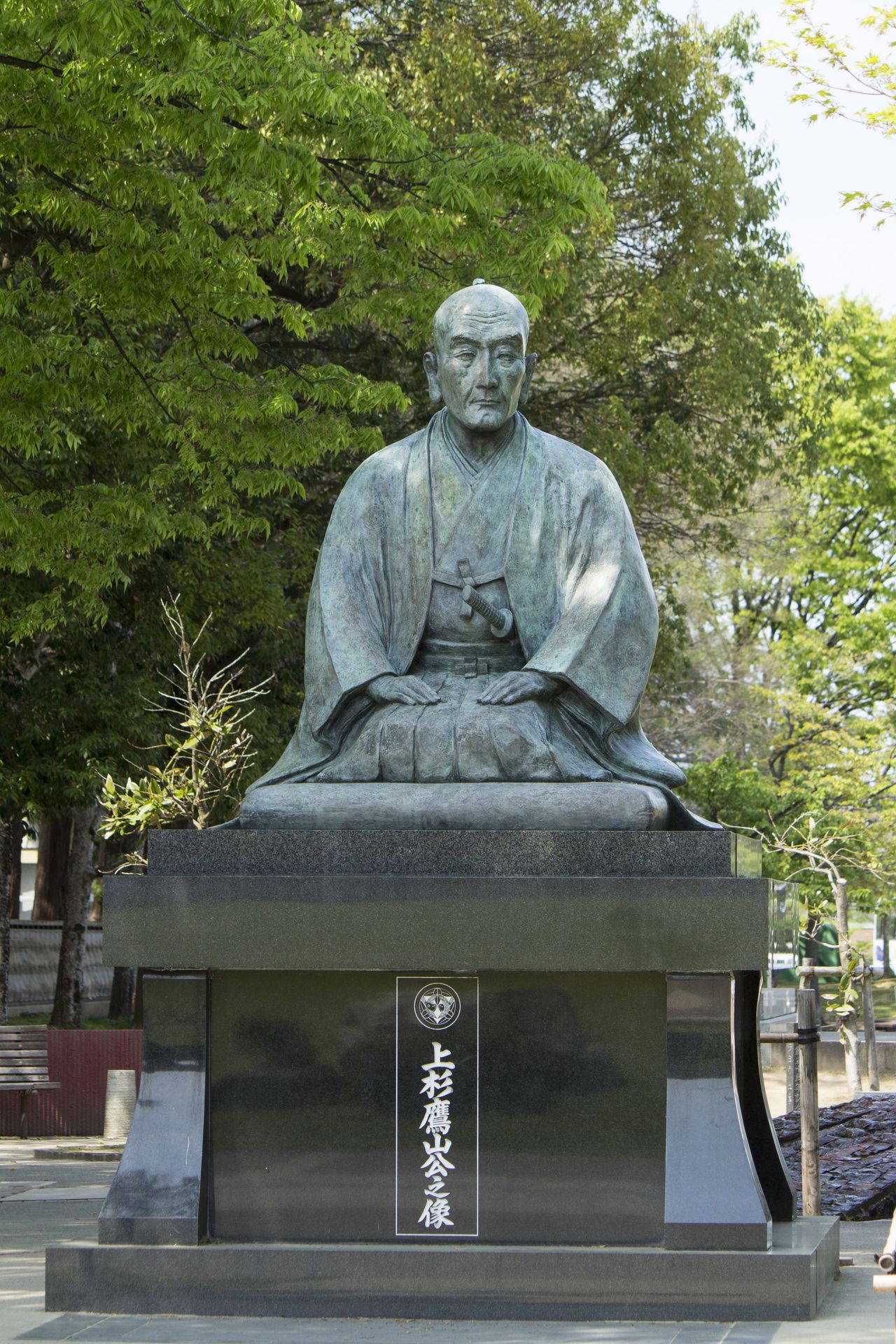 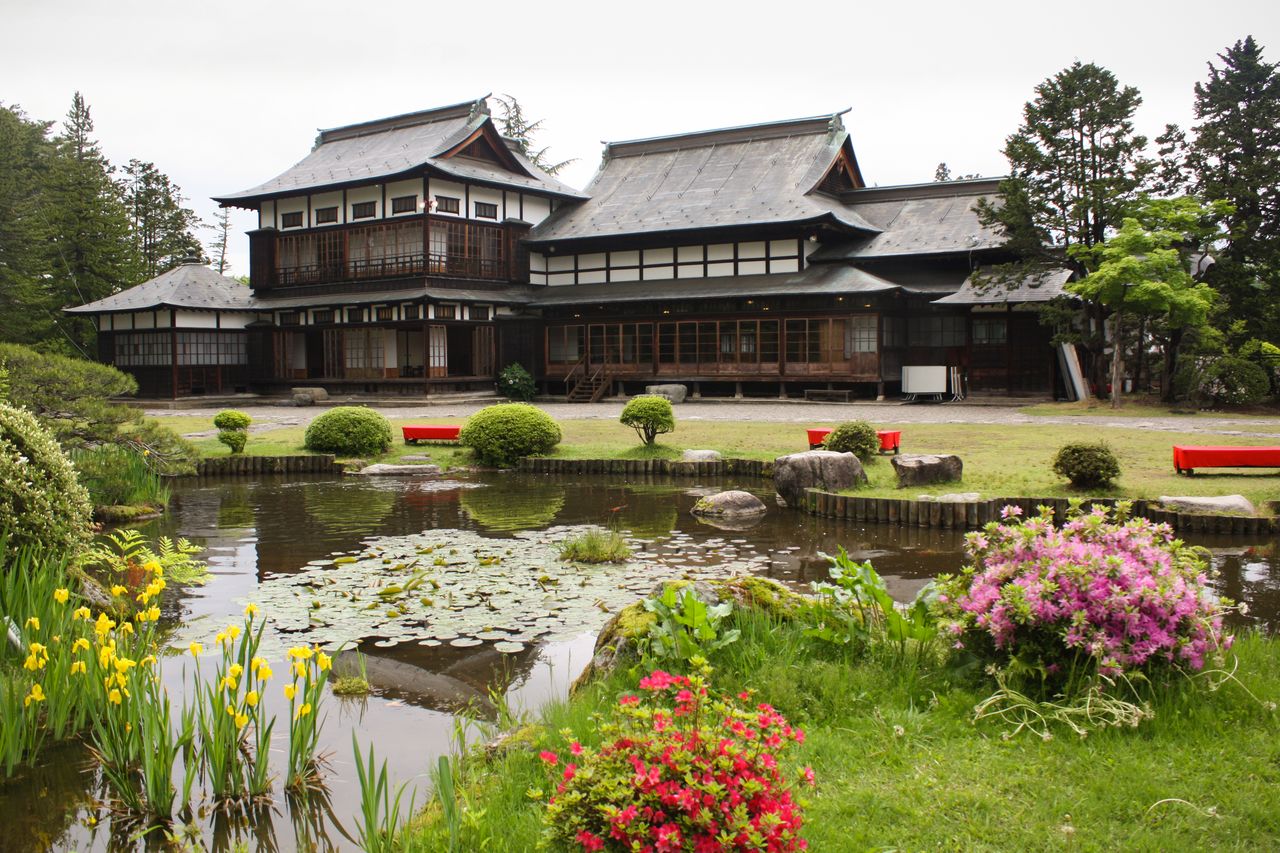 South of Matsugasaki Park on the site of the old ninomaru compound of the castle is the Uesugi Hakushaku-tei, the former residence of Uesugi Mochinori, the thirteenth and last daimyō of the domain. Originally built in 1896, the dwelling was destroyed by fire and rebuilt in its present form in 1925. The building is distinguished by such distinct architectural aspects as its copper-shingled roof and entrance constructed completely from zelkova. The surrounding manicured garden adds to the elegant atmosphere of the site.

The Hakushaku-tei, also known as the Uesugi Memorial Hall, houses a restaurant where guests can savor such delicacies as the local brand of wagyū, Yonezawa beef, along with more humble fare. In his campaign to tighten the belt of the domain, Yōzan encouraged residents to be frugal in their consumption of rice by adding foods like wild plants and vegetables to their diets during lean years. He even distributed written instructions on how to grow and store these items, known as katemono, as well as prepare dishes. The menu at Hakushaku-tei includes a number of examples of country cuisine made with ingredients like sansai mountain vegetables and preserved fish. 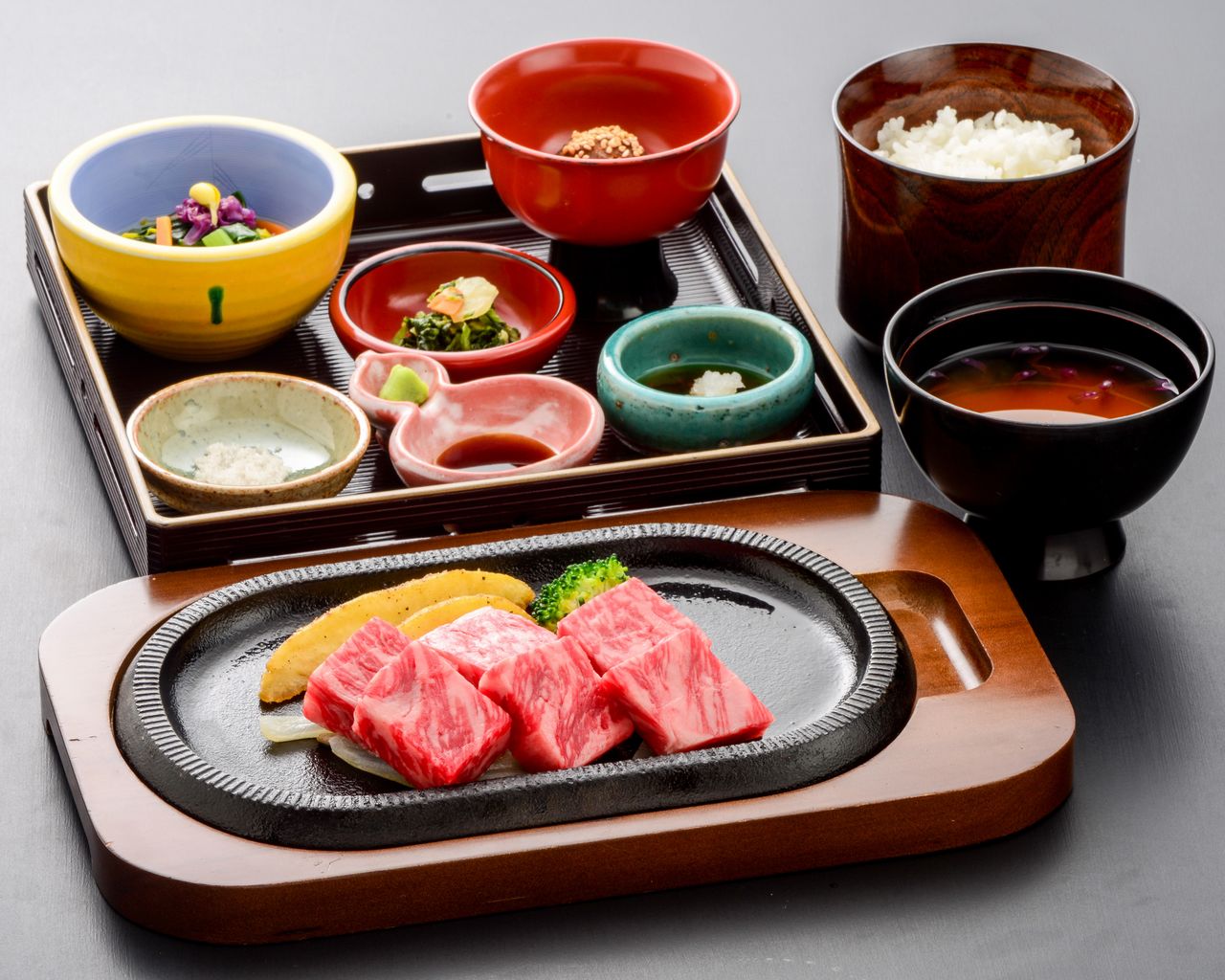 Hakushaku-tei serves country dishes along with local delights like Yonezawa-brand wagyū. (Courtesy of the Uesugi Hakushaku-tei)

Nearby Attraction: The Uesugi Clan Mausoleum

A short distance northeast of Matsugasaki Park, tucked amid a stand of ancient Japanese cedars, are the graves of the Yonezawa lords. The mausoleum is the resting place of the first eleven daimyō of the domain as well as Kenshin, whose remains were moved to the site from Yonezawa Castle when the keep was knocked down. The location was registered as a national historic site in 1984. 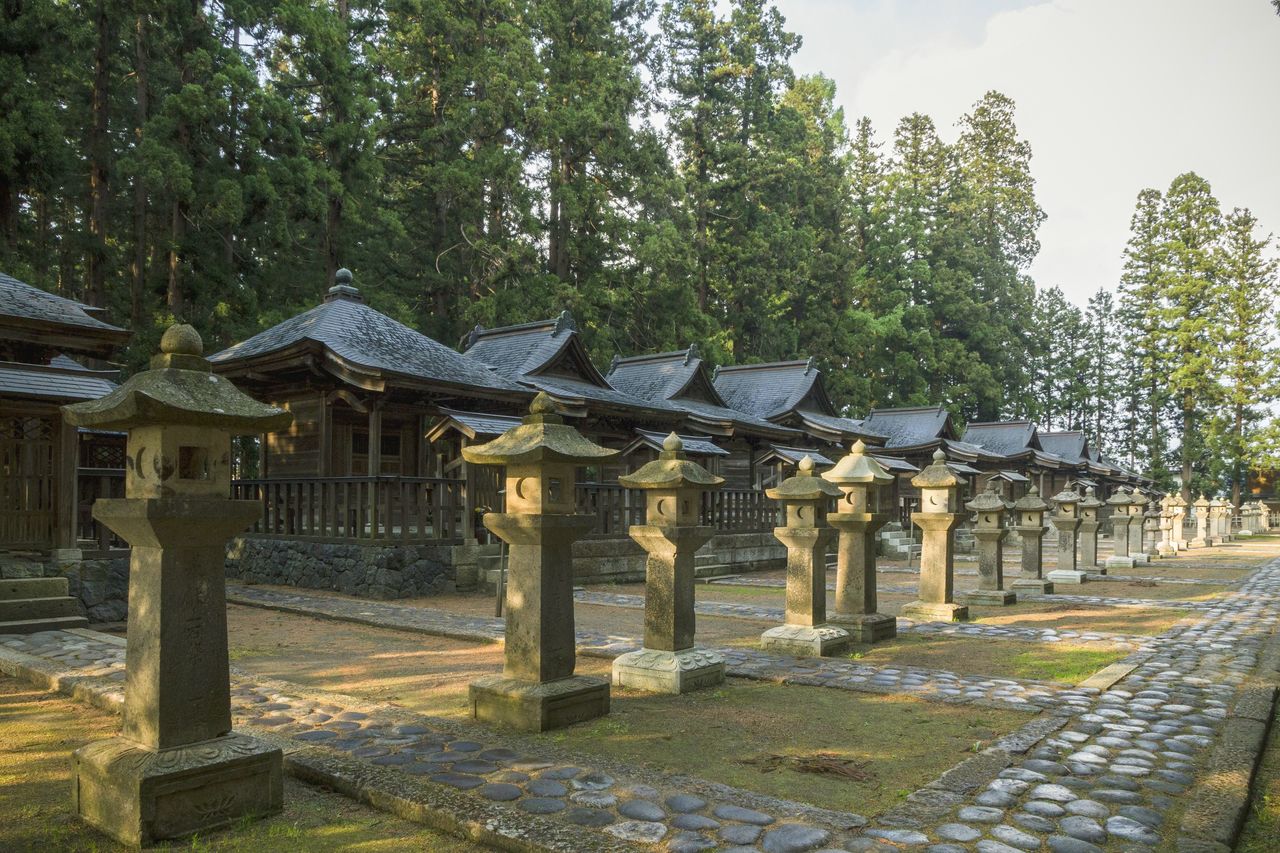 The graves of the Yonezawa daimyō. (Photo courtesy of the Yamagata Tourist Association)

(Originally published in Japanese. Reporting and text by Shoepress. Banner photo: Replica battle standards of the forces of warrior Uesugi Kenshin mark the entrance to the Uesugi Shrine. Photo courtesy of the Yamagata Tourist Association.)