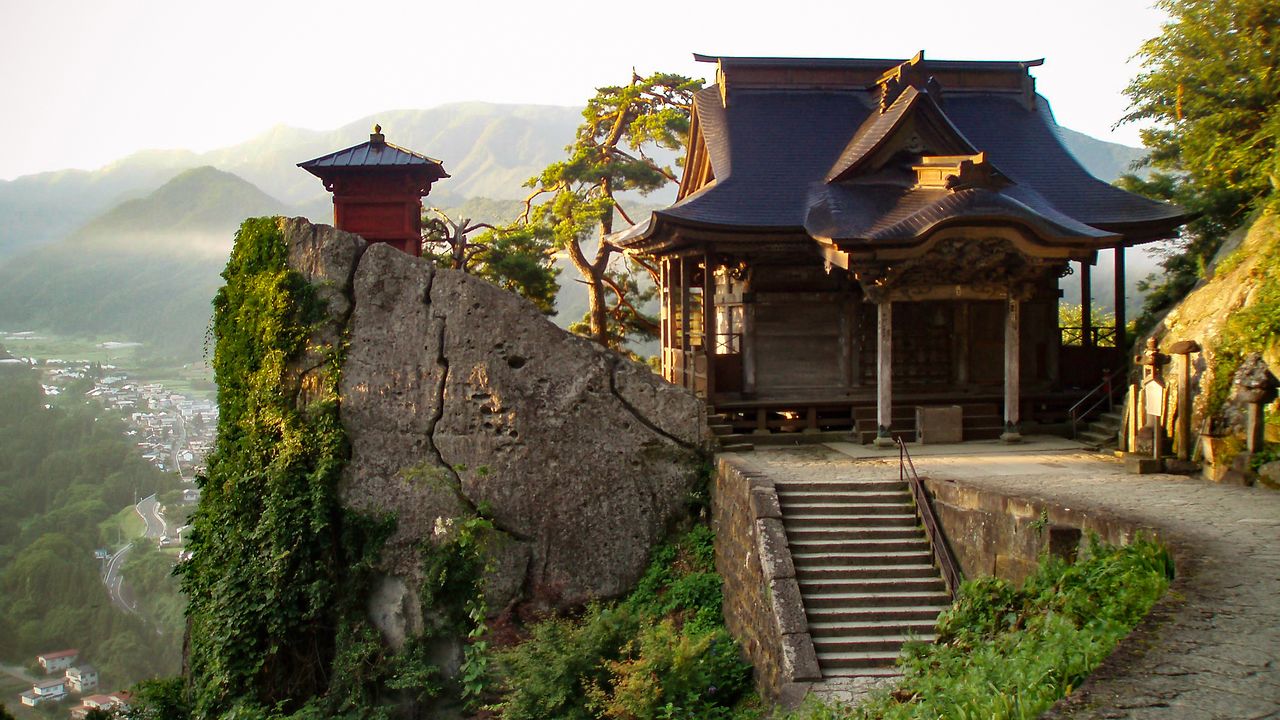 Yamadera: The Temple in the Sky

History Travel Jun 19, 2020
The Tōhoku region, in Japan’s northeast, was ranked among the “Best Trips” for 2020 by National Geographic magazine and made the list of the “Best in Travel 2020” regional rankings in the Lonely Planet travel guide. The region had hoped for a boost in popularity in conjunction with the Tokyo Olympics, but the coronavirus pandemic has quashed those expectations. This photo essay on the Yamadera temple complex introduces its highlights to entice visitors once again after the pandemic has abated.

Famed Temple in a Fantastic Setting

Hōjusan Risshakuji—better known informally as Yamadera, literally “the mountain temple”—is a complex of 30 large and small temple structures clinging to steep, rocky hillsides in eastern Yamagata Prefecture. It was founded in 860 by Jikaku Daishi (794–864), third head of the Tendai school of Buddhism in Japan. Better known as Ennin, he also founded the great temples of Chūsonji in Hiraizumi, Iwate Prefecture, Zuiganji in Matsushima, Miyagi Prefecture, and Osorezan on Aomori Prefecture’s Shimokita Peninsula.

Famed haiku poet Matsuo Bashō (1644–94), known for his travels throughout Japan, visited Yamadera in 1689. In his Oku no hosomichi (The Narrow Road to Oku), a prose and verse travel diary, Bashō relates that having heard that Yamadera was a sight not to be missed, he turned back at Obanazawa, a town in Yamagata Prefecture, expressly to visit it. From this it’s clear that Yamadera was famed for its scenic beauty even centuries ago. It retains the same tranquility as in days of yore, and the scenic panorama unfolding from the Godaidō viewing platform makes the exertion of climbing 1,015 stairs to the top vanish in an instant. 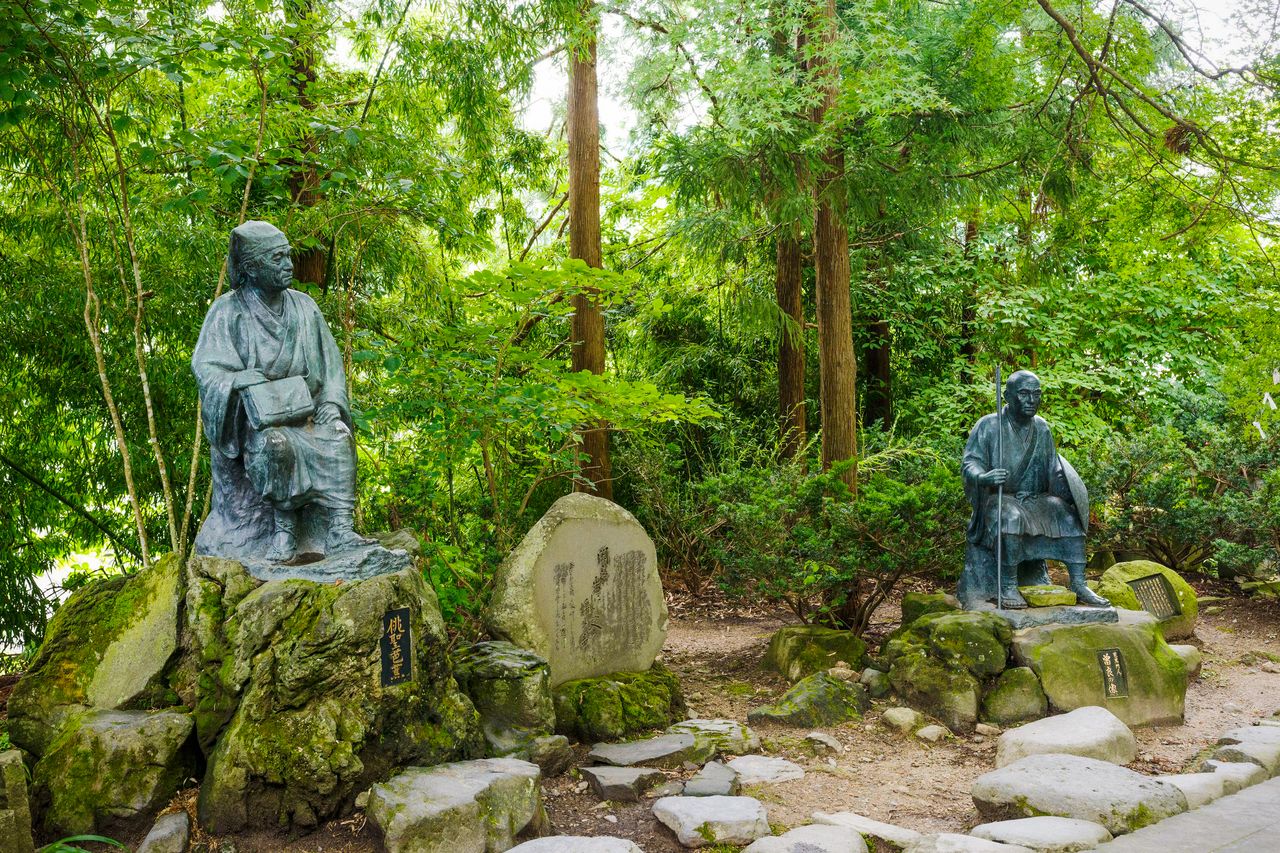 Figures of Bashō and his student Kawai Sora (1649–1710). (Courtesy of the Yamagata Tourist Association) 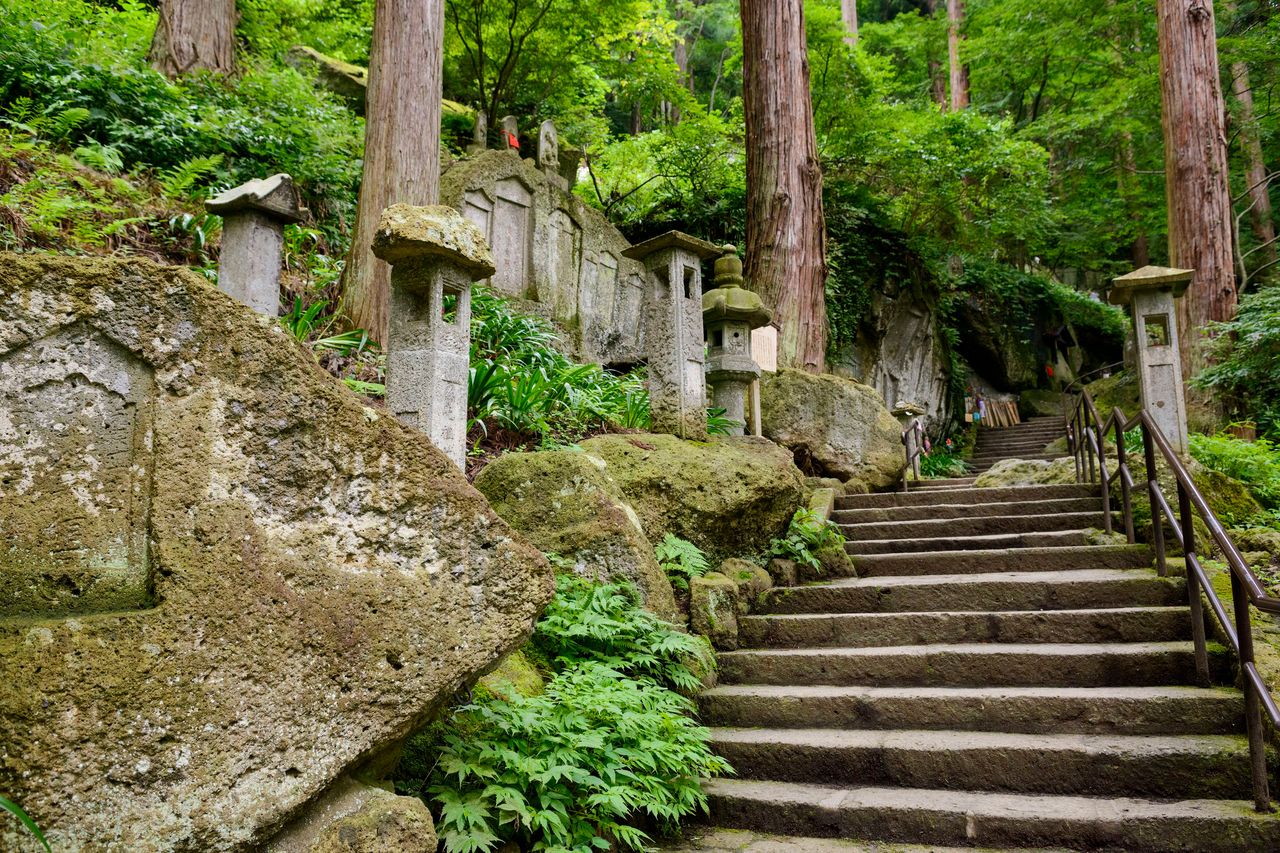 Stone steps leading up the mountain weave through a dense forest. (Courtesy of the Yamagata Tourist Association) 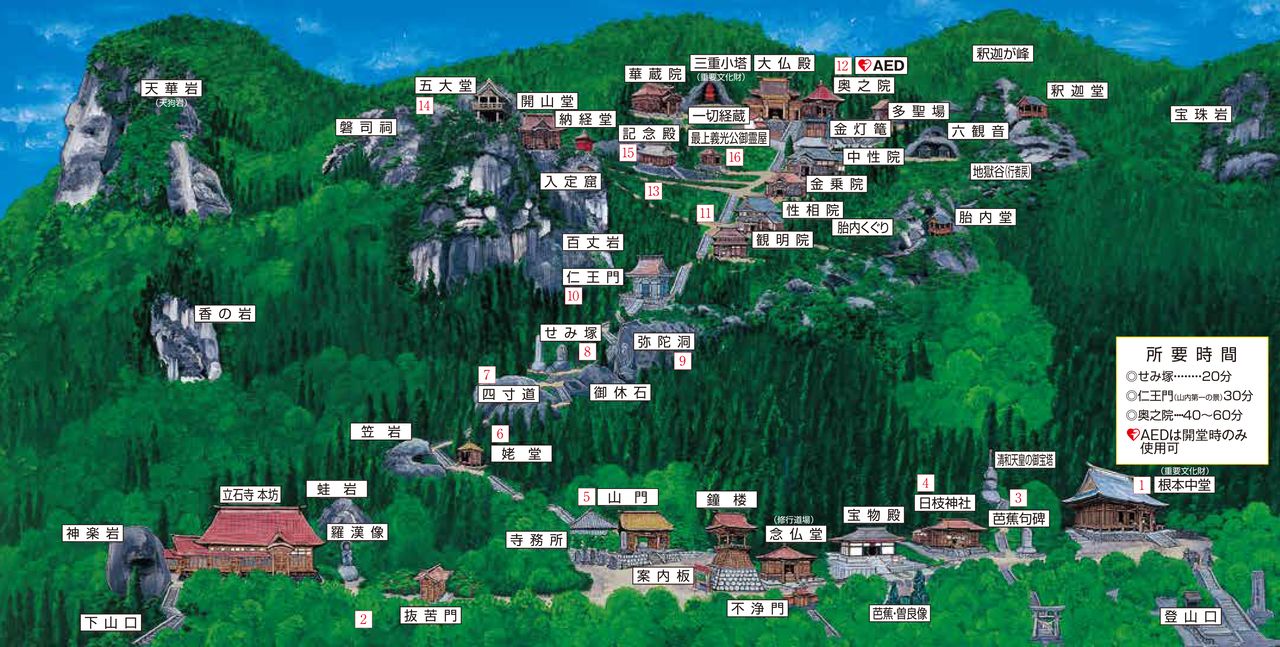 A map of the temple complex. The path from the Sanmon gate to Okunoin is closed due to the COVID-19 pandemic, as of the time of publication. Please check Yamadera’s official website (link below) for the latest information concerning access.

Eternal Flame at the Konpon-chūdō

The mountain trailhead is about a 10-minute walk from Yamadera Station on the JR Senzan Line, which runs between Sendai and Yamagata. If you look straight up, temple buildings clinging to sheer rock faces are visible among the trees. The main temple hall facing the entrance is the Konpon-chūdō, rebuilt in 1356 by Shiba Kaneyori, the first lord of Yamagata Castle. It is constructed of beechwood and is reputedly the oldest structure of its kind in the country. A wooden statue of Hotei, one of the seven gods of fortune, stands at the entrance, its belly worn smooth by worshippers rubbing it in the hope of attracting fortune themselves.

The ritual fires brought to Risshakuji (Yamadera) over 1,000 years ago from Enryakuji in Shiga Prefecture, the head temple of the Tendai school, continue to burn in the Main Hall. These ritual fires, carefully tended since the founding of the Tendai school in Japan in the eighth century, were snuffed out when Enryakuji was destroyed by the warlord Oda Nobunaga in 1571. In a twist of fate, the fires that burn at Enryakuji today were later transferred back from Yamadera. 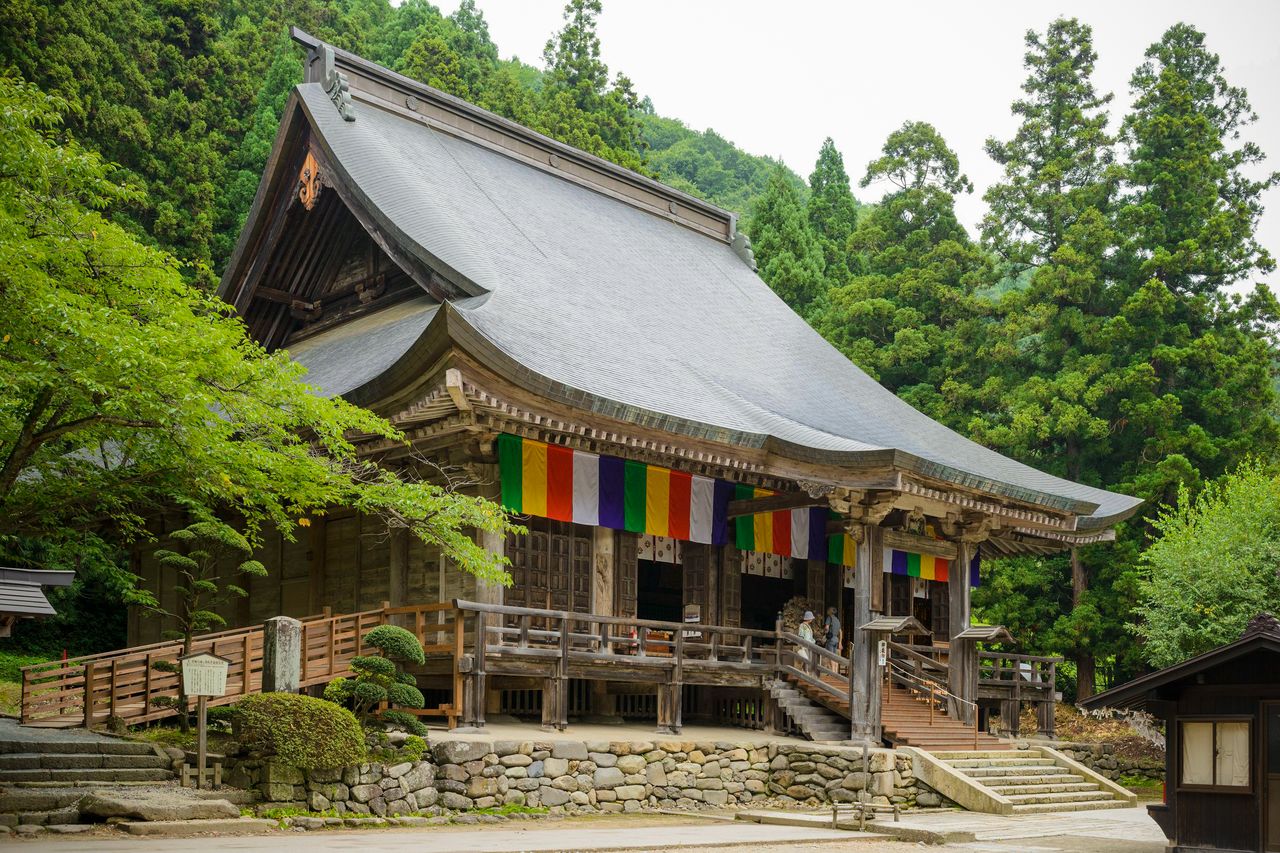 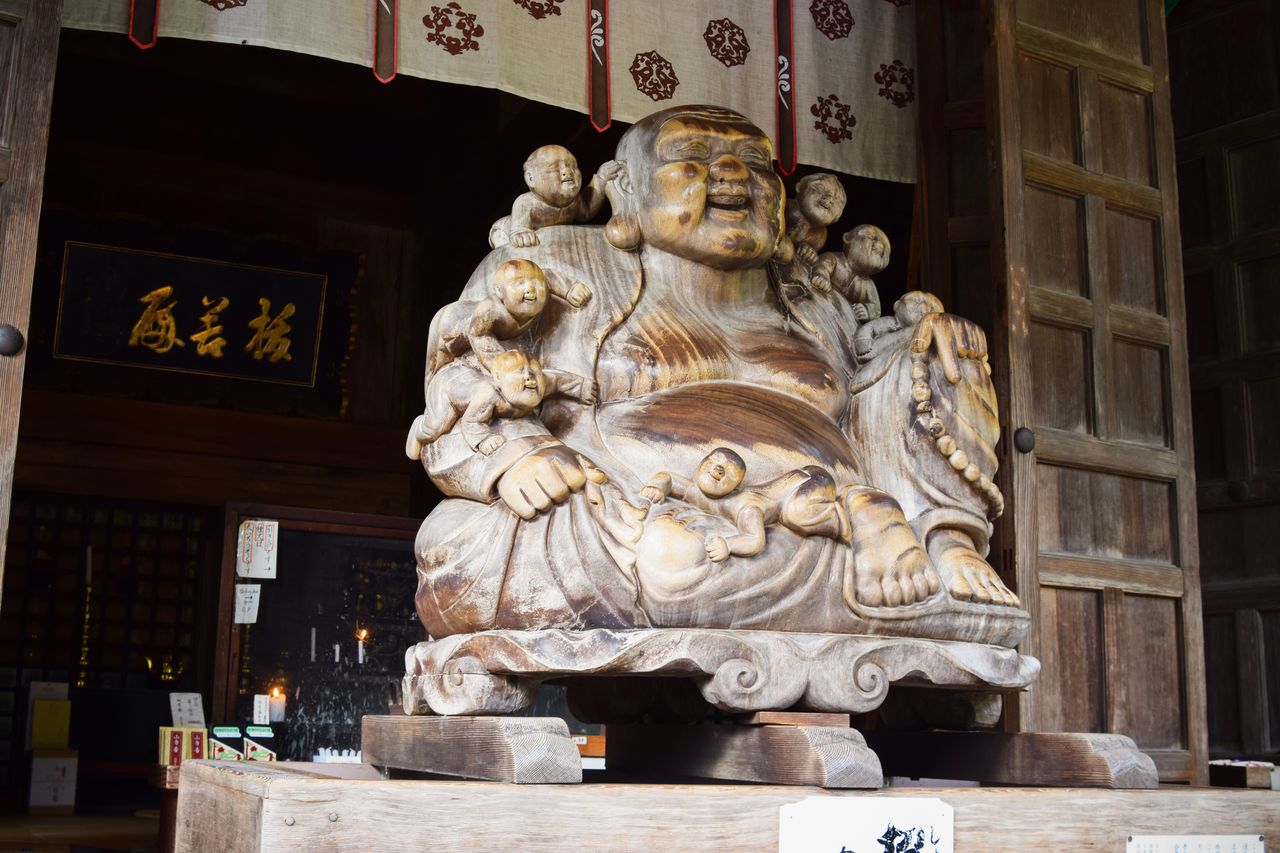 The belly of Hotei, one of the seven gods of fortune, has been rubbed smooth by worshippers.

A Wealth of Sights on the Mountain

Having paid their respects at the Main Hall, visitors go through the Sanmon gate, where the climb to the top begins. Each step leading to the Okunoin at the summit represents ascetic practice and is said to extinguish one worldly desire. The steps are very narrow, only 14 centimeters wide in some places. There are 1,015 steps in all, an arduous climb bound to leave even the fittest out of breath; a round trip takes one and a half hours.

Yamadera is where Bashō composed one of his best-known haiku: “Ah, such stillness;  / that the very rocks are pierced / by cicadas’ drone!” This poem brilliantly expresses the comforting quiet of the mountain path as the insects trill. Students of Bashō visiting Yamadera later guessed at the spot, midway between the Sanmon and Niōmon gates, where he might have been inspired. There they buried a copy of the poem and erected a stone pillar, known as the semizuka, in 1751. 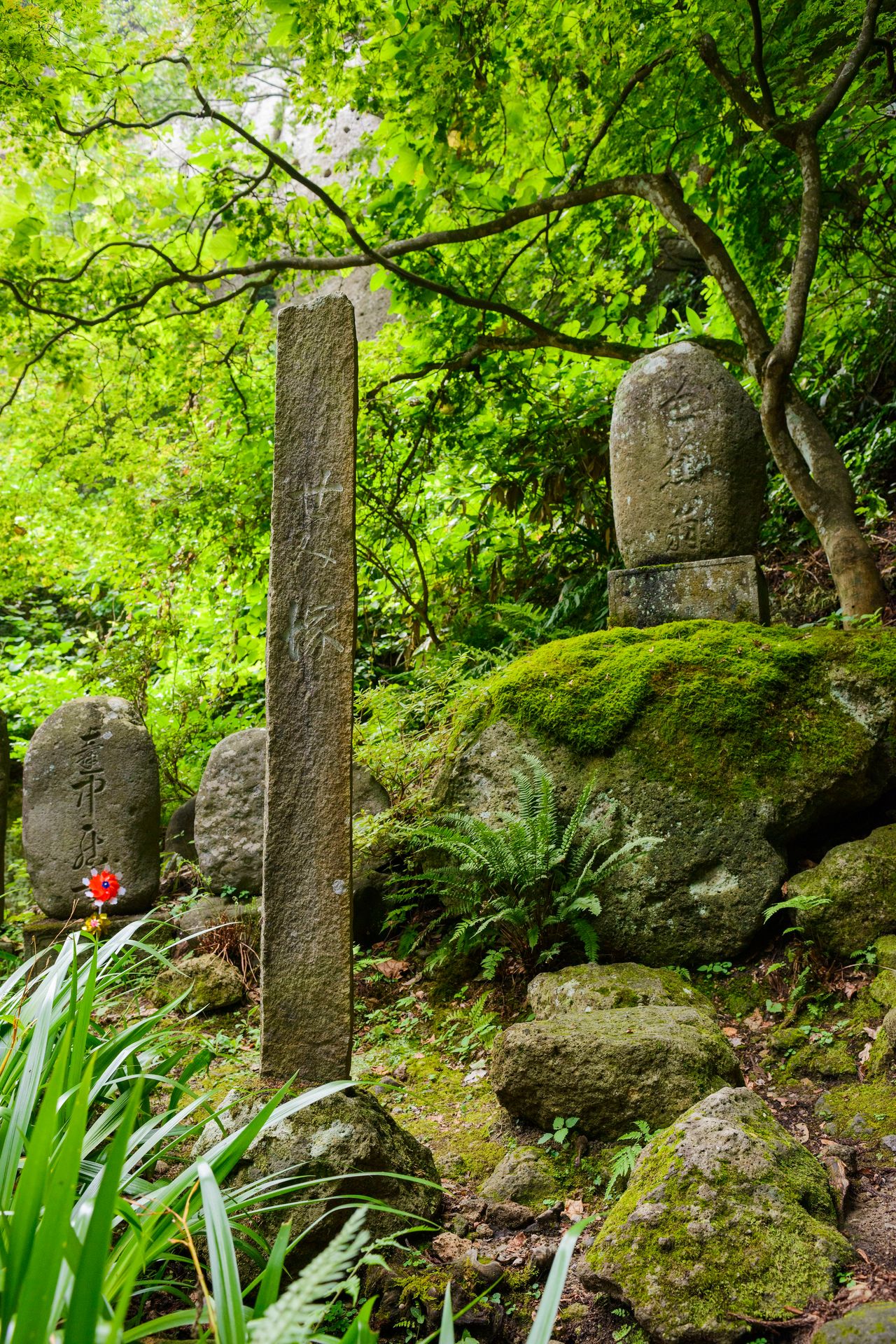 The semizuka stone pillar marking the spot where Bashō once trod. (Photo courtesy of the Yamagata Tourist Association)

A short climb up from the semizuka brings the Midahora into view. This is a giant rock outcropping onto which a 4.8-meter-high figure of Amida Nyorai, also known as Jōroku Nyorai, was carved. A glimpse of the beautiful Niōmon gate from here at the halfway mark of the climb is one of the most iconic views of Yamadera. The guardian deities flanking the entrance cast fierce glares, warning any visitors with malice in their hearts to proceed no further. 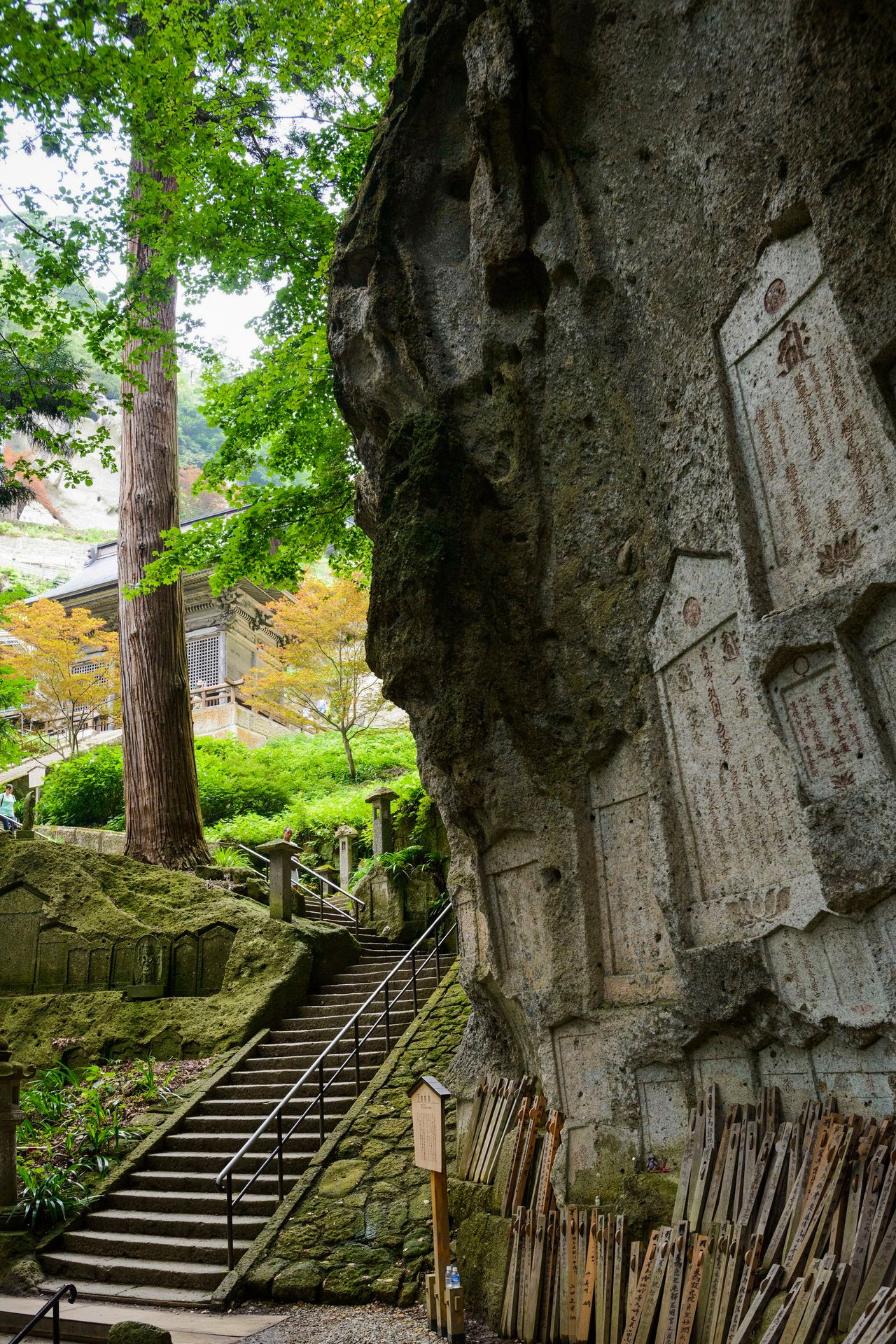 A view of the Niōmon gate, seen from the Midahora stone outcropping. (Photo courtesy of the Yamagata Tourist Association)

A series of subtemples—Shōsōin, Konjōin, Chūseiin, and Kezōin—come into view past the Niōmon. Up until the Edo period (1603–1867), there were twelve minor temples at Hōjusan, but today only the above four remain.

Atop a cliff to the right is the small temple building Tainaidō, which the faithful reach by clambering across a ladder over a precipice and scrambling under a rock. The cliff features a series of strange rock formations, where Buddhist priests have undergone rigorous ascetic training for over a millennium, making Yamadera known as a site of religious training.

At the end of the trail is Nyohōdō, popularly known as Okunoin. Here statues of Shaka Nyorai and Takara Nyorai, which Ennin purportedly carried with him during his travels in China, are enshrined as the main figures. 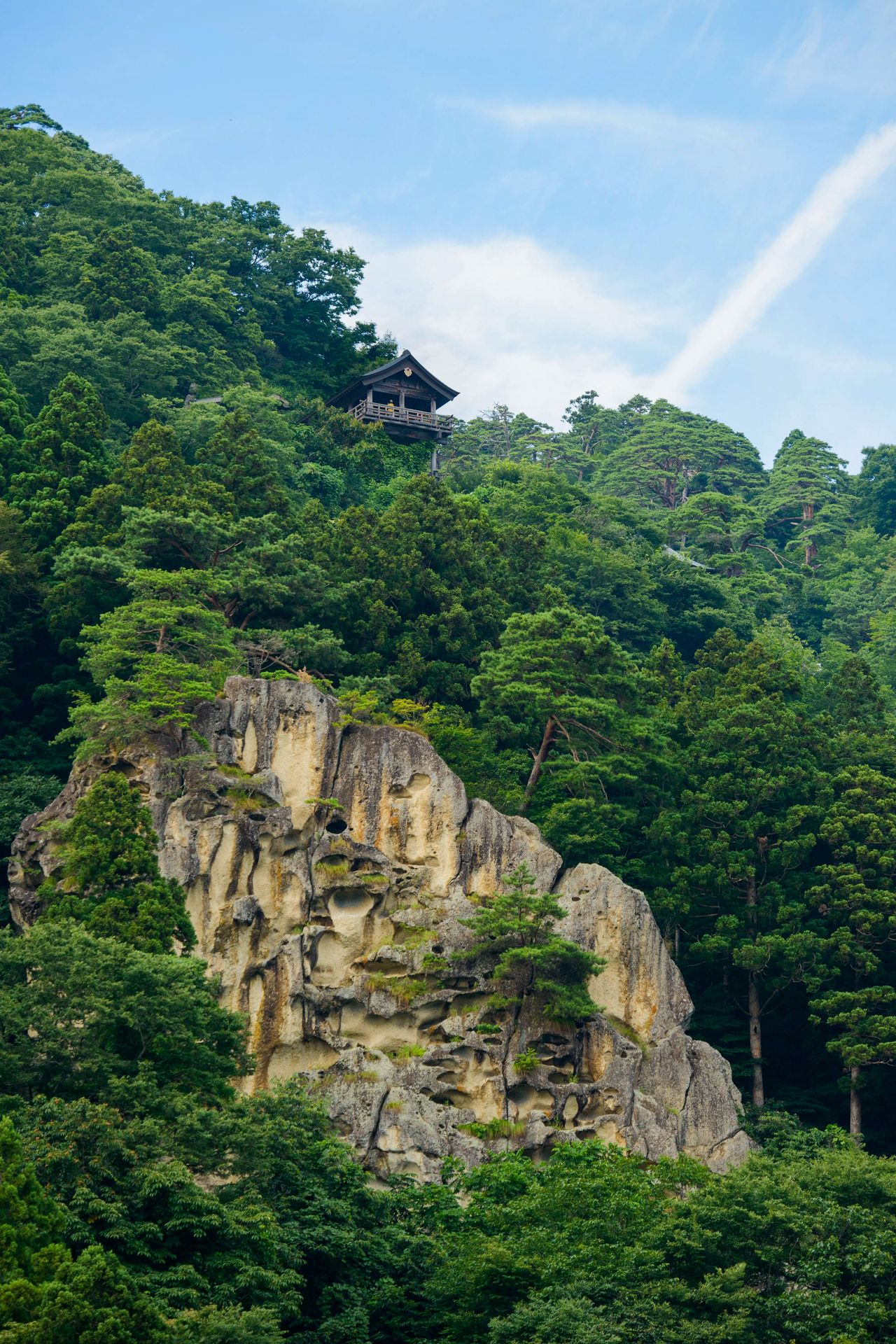 Tainaidō, out of bounds to ordinary worshippers, stands atop a cliff. (Photo courtesy of the Yamagata Tourist Association) 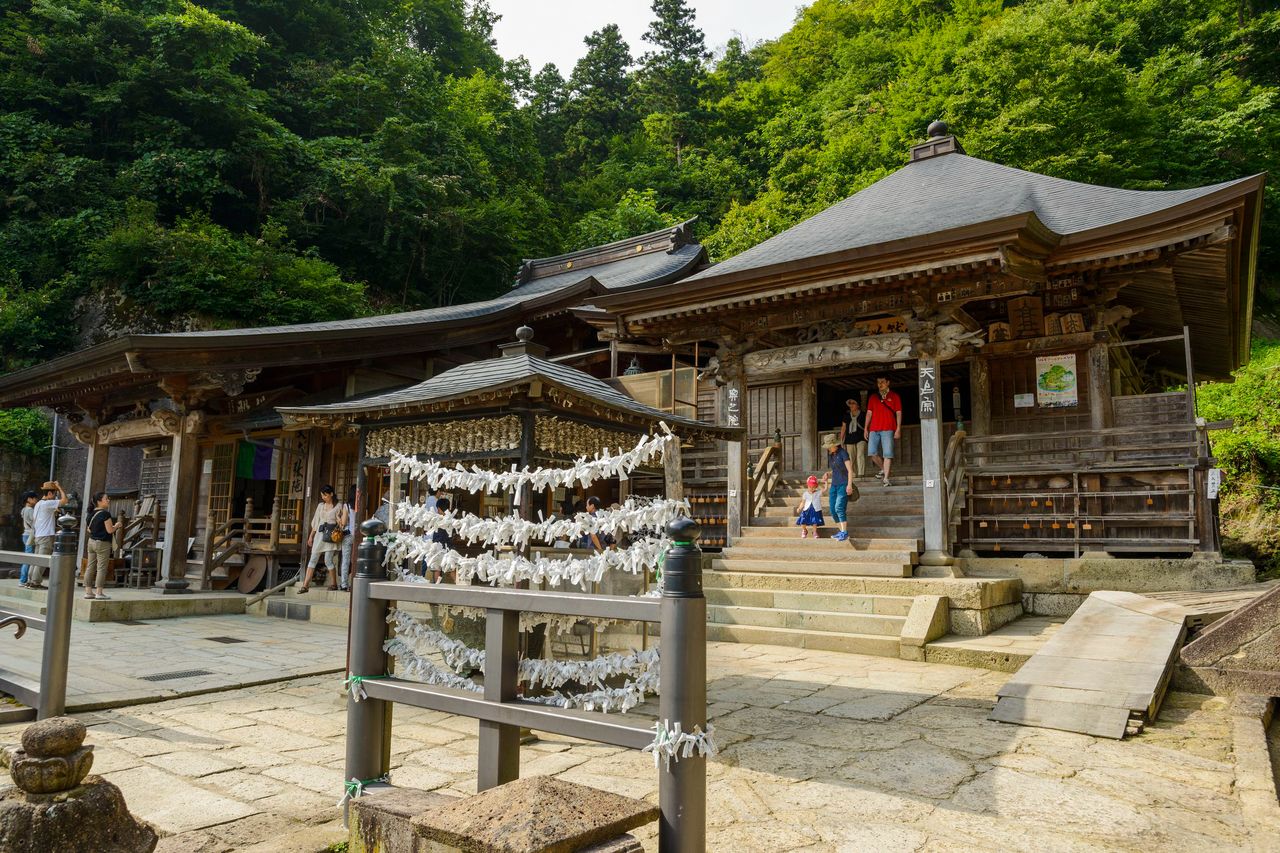 The Okunoin was rebuilt in 1872. The Great Buddha Hall to the left houses a 5-meter statue of Amida Nyorai. (Photo courtesy of the Yamagata Tourist Association)

On the return leg from Okunoin, a path to the left just before the Niōmon leads to the Kaizandō hall and Nōkyōdō, a sutra repository, along the cliff. Farther down the path is the Godaidō, where the Five Wisdom Kings are worshipped to pray for peace throughout the land. The structure juts out over the cliff, hovering as if in midair, and offers a fine panorama of the surrounding mountains and fields and rice paddies far below. The expansive view is guaranteed to make visitors forget their exertions and, like Bashō, experience a feeling of profound refreshment. 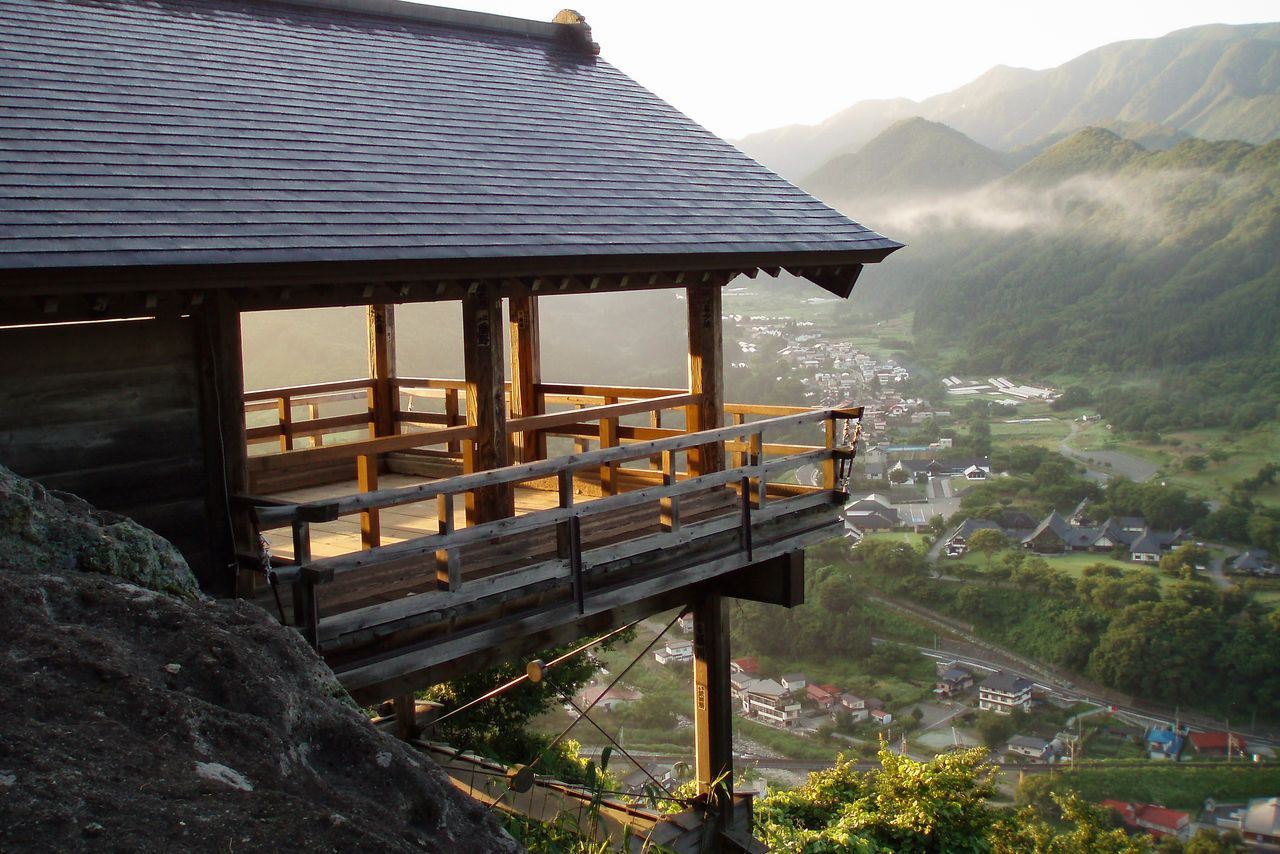 The Godaidō viewing platform juts out over the mountainside. (Photo courtesy of the Yamagata Tourist Association) 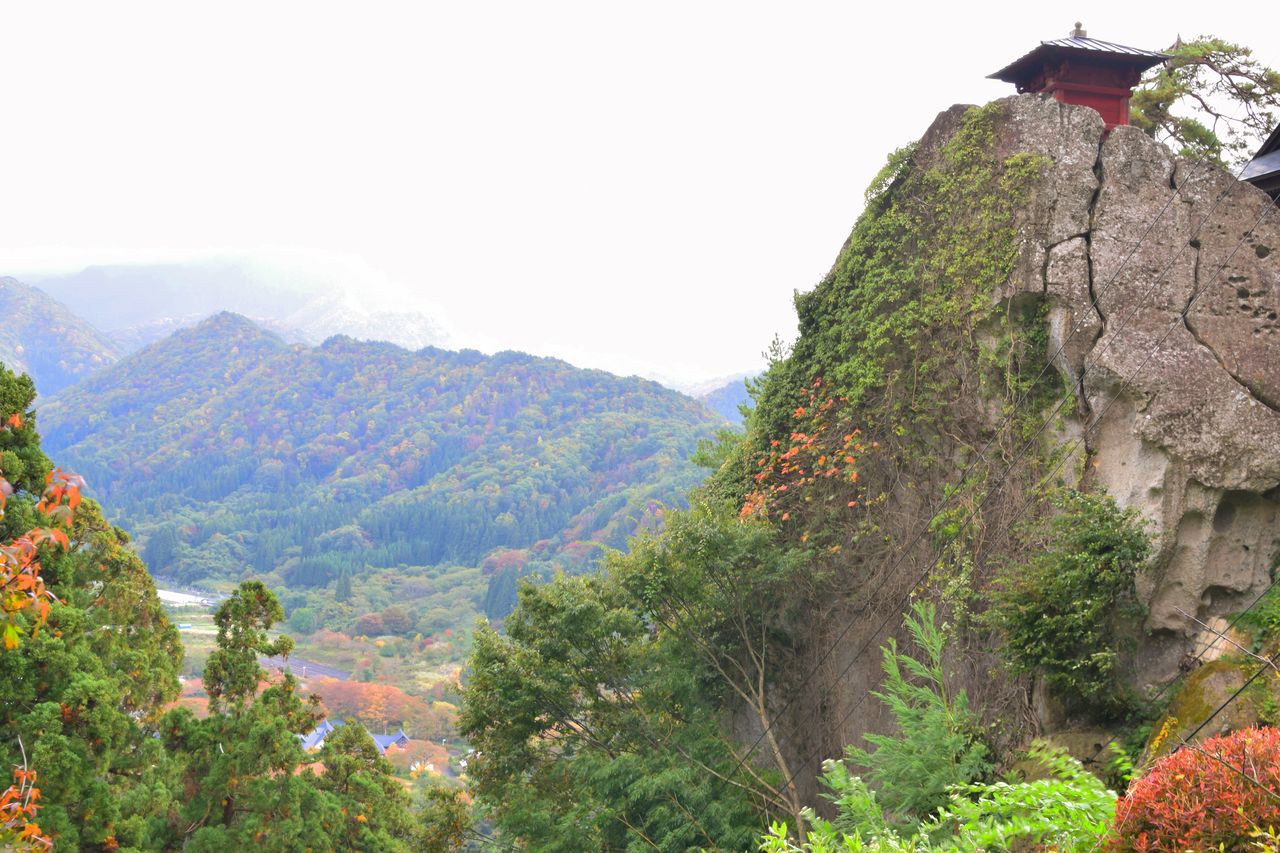 The red structure at the top is a sutra repository.

(Originally published in Japanese. Reporting, text, and photos by Shoepress, except where otherwise noted. Bashō haiku translation from Steven D. Carter, Traditional Japanese Poetry: An Anthology. Banner photo: The Kaizandō, which houses a wooden statue of Jikaku Daishi, and the sutra repository. Courtesy of the Yamagata Tourist Association.)