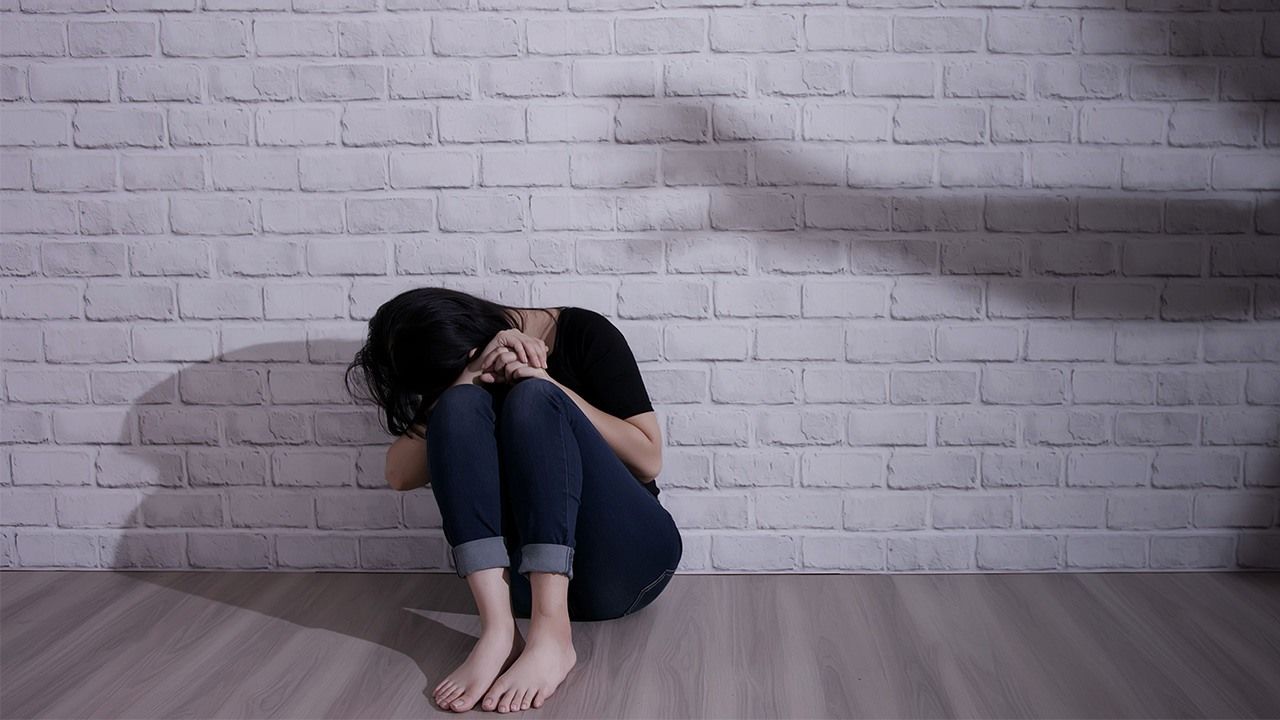 A Society with No One to Turn To

Society Work Economy Dec 27, 2021
The COVID-19 pandemic has caused people to stay at home, reducing their contact with other people and wider society, exacerbating social issues of loneliness and isolation. The root of the problem may lie in the mindset of not wanting to inconvenience others.

Social Isolation is Prevalent in Japan

In February 2021, the Japanese government appointed its first cabinet minister in charge of policy on loneliness and isolation, and established an office responsible for countermeasures to these issues, which continues to operate under the new administration of Kishida Fumio. These moves are indicative of the government’s strong awareness of the severity of the problem. In fact, compared with other countries, many people in Japan live in social isolation, with nobody to turn to for support. In a 2005 report by the Organization for Economic Cooperation and Development, Japan was deemed to have the most people suffering social isolation among 24 member nations, and the situation is not improving. The 2015 Cabinet Office report “International Comparison Study on Life and Attitude of the Elderly” revealed that Japan has a high proportion of people with nobody they could rely upon, except for cohabiting family members, indicating the high level of social isolation. 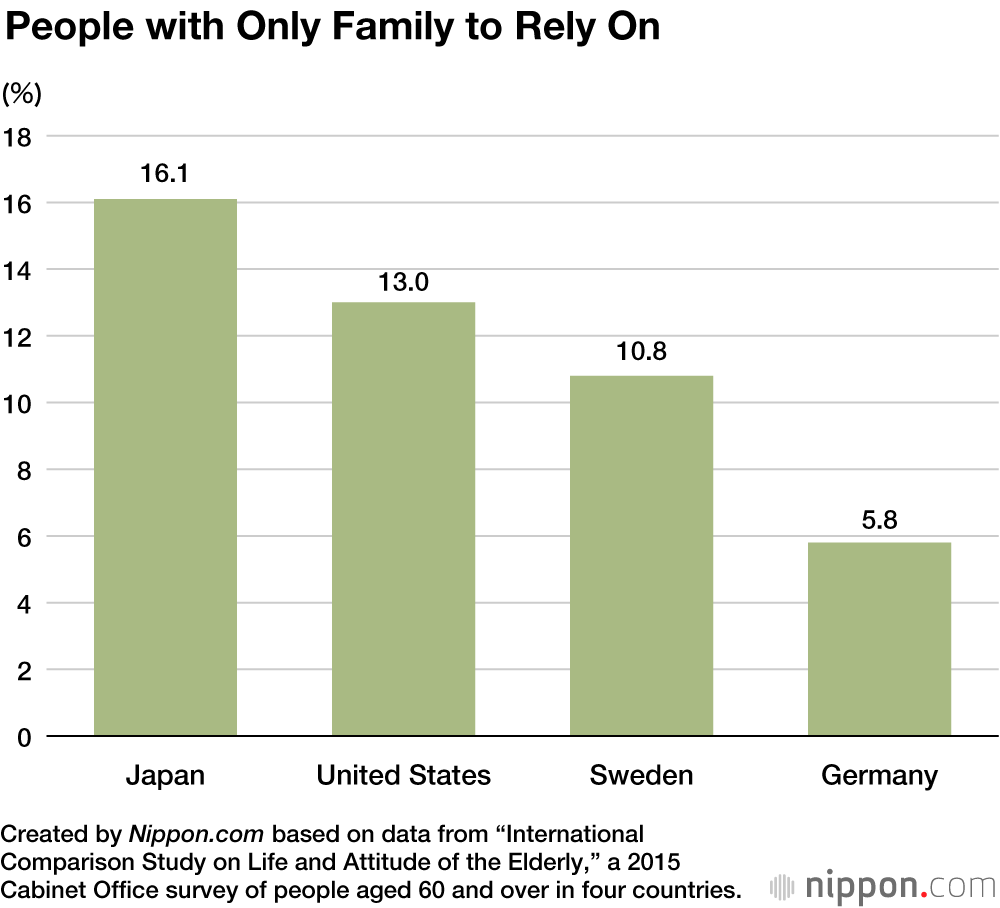 The situation is similar for young people. The Cabinet Office’s 2018 “International Survey of Youth Attitude” studied people aged 13 to 29 in seven countries. When asked “Who do you like to consult with when you have concerns and worries?” the response “I have nobody to consult with” was ranked highest among Japanese youth. 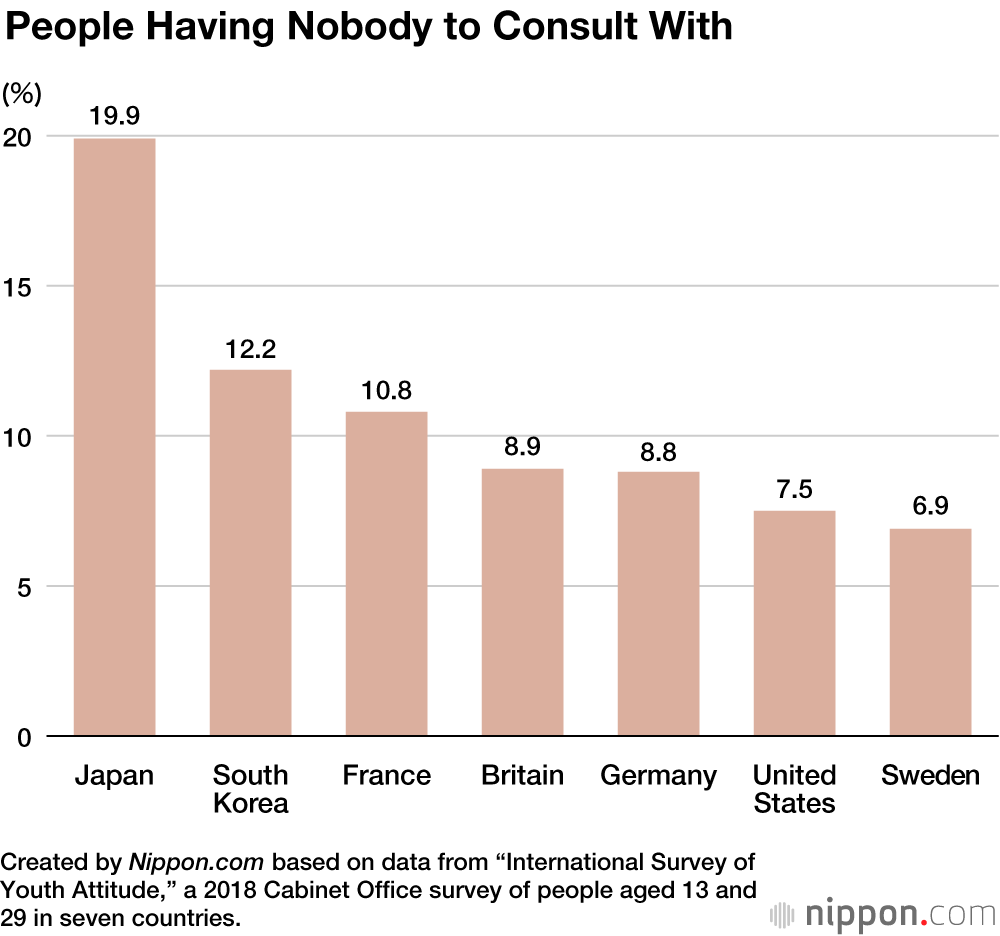 The high number of socially isolated people in Japan appears to correspond to its high levels of suicide, internationally speaking. In 2015, Japan ranked eighteenth highest among 183 countries in the number of suicides per 100,000 population. Even among countries surveyed for the “International Survey of Youth Attitude,” South Korea was the only country ranked above Japan.

Why do so many Japanese people feel they have nobody they can rely on? Below I consider loneliness and social isolation from the perspective of Japanese attitudes toward the individual and freedom.

The Needy as a Nuisance

As with many developed nations, Japan strongly values respect for the individual and protection of freedom. People respect the principles, convictions, and decisions of individuals, and place importance on assurance of their freedom. But freedom paradoxically involves restrictions. As in other countries, violence against others or stealing others’ property—causing harm to others—is strictly proscribed. Furthermore, the definition of violence includes psychological forms.

Yet another characteristic in Japanese society is that causing annoyance to people or in general society is also considered as causing harm to others. People view reliance on others and failure to resolve issues independently as taboo. Making work for others causes them inconvenience and is seen as troublesome behavior. Respect for the individual and freedom belies a hidden group psychology that emphasizes concern for wider society.

Japanese liberalism prioritizes responsibility to those around us and to society at large, over the rights of individuals. This attitude has a deep impact on issues of loneliness and isolation.

Japanese people now see traditional rural farming communities, where strong bonds existed between people, as a suffocating form of collectivism. In the effort to rid themselves of this, they strove to build a society where people can live independently. In the process, they built a robust system, with goods, services and social security available—at monetary cost—to provide the necessary resources for living without relying on others. Now, given a reliable level of assets and an Internet connection, one can live without interacting with others.

This system where people can live in isolation has increased the tendency to view human relations as a luxury—a state of affairs where people only connect with people when they wish to of their own volition. People are no longer forced to form unwanted connections. Life is not lived in the context of connections with others, but maintained within the capitalist system through an individual’s efforts to obtain academic qualifications and assets. In exchange for the freedom gained through separation from others, we must now strive to earn money and sustain our own livelihood.

This makes it harder to provide assistance, helping those in need, which is the origin of human society. When the basis of a system for individual independence is the ability for each person to earn a living and become self-sustaining, reliance on others is seen as laziness—a failure to strive to maintain oneself. Consequently, the tiny cry for help is drowned out by the voices of the crowd, who accuse them of overdependence and being a nuisance.

In 2016, Hashimoto Kenji surveyed 5,631 people living within a 50 kilometers of the center of Tokyo about their work, lifestyles, and communities. His study revealed widely held expectations that, people suffering from economic hardship or less-fortunate family backgrounds, or who lacked social relationships, should not cause a nuisance to others, to an even greater extent than others were expected to do so. Japanese liberal society, which prioritizes responsibility to others and to society, labels the cry of those in need as “bothersome,” and embraces mechanisms for abandoning such people.

A more inclusive society that provides guarantees for individuals’ livelihoods without reliance on others could mitigate social isolation. But antipathy to relying on others is also why people are reluctant to accept government support.

Japan has a social welfare system to guarantee a minimum livelihood for citizens—a practical expression of the constitutional guarantee to “the right to maintain the minimum standards of wholesome and cultured living.” This right extends to everybody living here. But the belief that it is natural to receive protection is not widespread in Japan.

Even with efforts to encourage those in need to seek assistance, some feel that the one thing they never want to receive is welfare. There are also many instances where people receiving welfare are subject to criticism. The cause is the taboo of causing a nuisance to others.

Social welfare is, of course, funded from taxes, and can therefore be seen as a system for mutual assistance that we are all entitled to, where greater society protects the minimum standards of living. But those with a less generous perspective believe that a social welfare system burdens taxpayers to assist people who are unwilling or unable to make sufficient effort to support themselves. From the viewpoint of those shouldered with the burden, people receiving social welfare may be seen as a nuisance. Instances of criticism or bullying of welfare recipients cause many to obstinately refuse welfare.

The people who reluctantly turn to Japan’s welfare system, meanwhile, have been forced into unavoidable circumstances through no intention of their own. Japanese emphasis on individuals’ responsibility to people around them and to society gives a deeply negative connotation to seeking assistance from the government or others, making it hard for people to rely on external aid.

Respect of the individual and of freedom entails restrictions, which forges a particular type of society. Japan may appear to be a free society, but conscious avoidance of causing nuisance to others imposes strong constraints on individuals. During the COVID-19 pandemic, people in Japan autonomously wore masks and regulated their behavior, even without the imposition of harsh restrictions, avoiding widespread infection. This helped the nation achieve what the United States and European countries could not. But on the flip side, people who do not abide by the rules—and even those infected with COVID-19—were seen as causing a nuisance to general society.

The high incidence of loneliness and social isolation in Japan is the price paid for the order and discipline provided to society through the tendency to preference individuals’ responsibilities toward others and to society over their own rights.