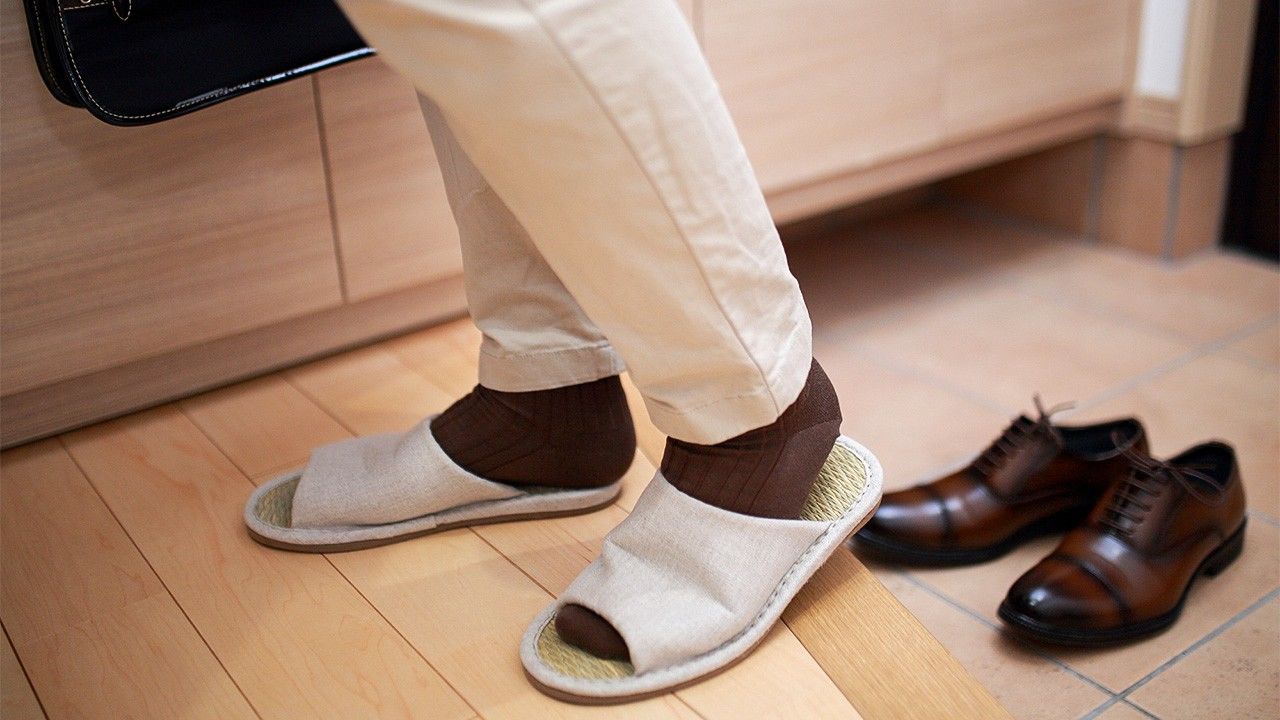 Culture Lifestyle May 3, 2021
Japan has had a tradition of removing shoes when entering buildings since ancient times, but the use of slippers dates back only to the 1950s.

Visitors to ryokan (traditional inns) in Japan are requested to remove their shoes. After putting them in a shoe cupboard or lining them up on the floor, guests don slippers for indoor wear. There are also special slippers for use in the toilets. At Western-style hotels, it is possible to enter a guest room wearing shoes, but it is also common to have slippers available. 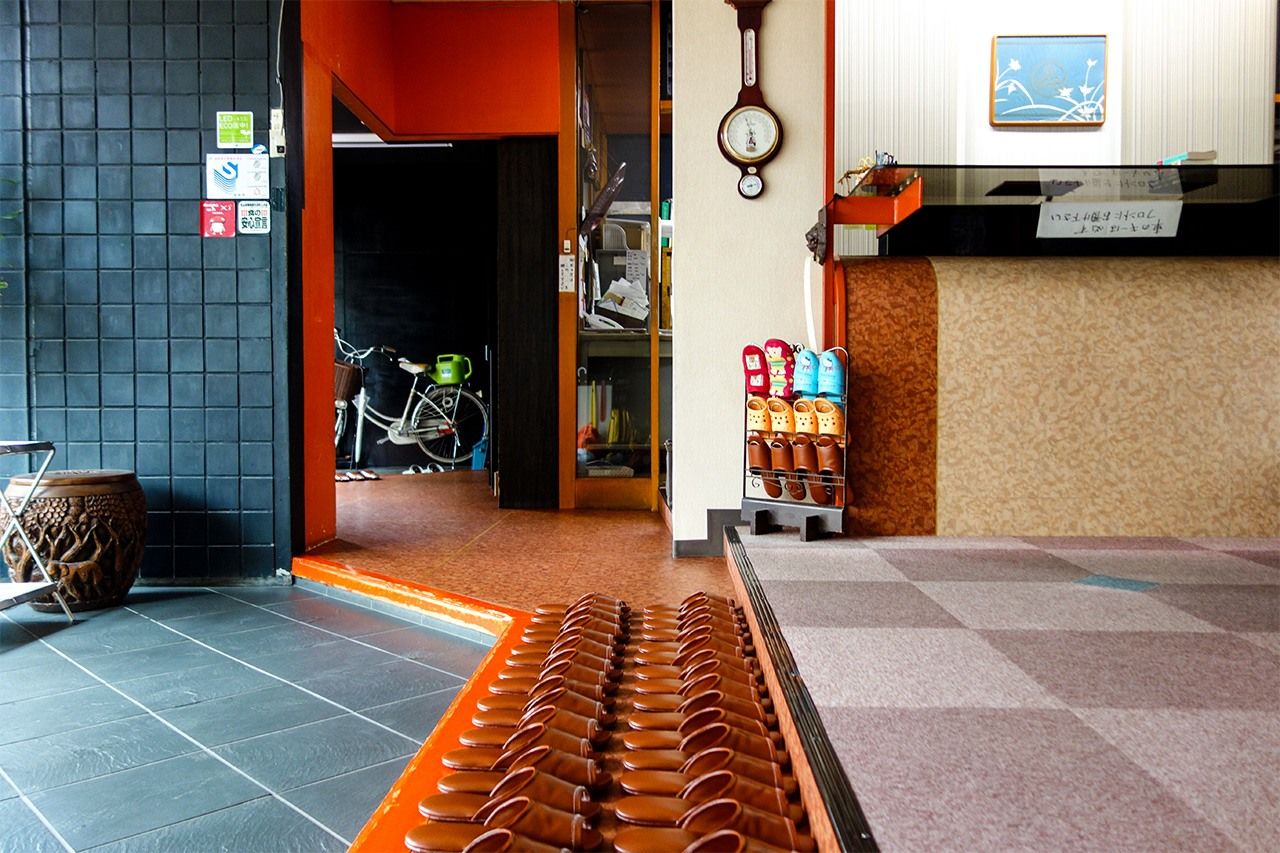 Slippers lined up at the entrance to Aizu Tsuruya in Aizuwakamatsu, Fukushima Prefecture. (© M-Louis)

Japan had been closed to most foreigners for more than two centuries, when an 1854 treaty with the United States heralded the rapid opening up of the country and the arrival of many Western visitors. While Japanese people were used to taking off zōri sandals or geta clogs before going inside, most of these visitors were not.

As there were few Western-style hotels at the time, travelers stayed in Japanese-style lodgings and temples. Problems frequently arose when they entered with their shoes still on, taking tatami mats for a kind of carpet, resulting in damage to the reed mats. Residents of the foreign settlement in Yokohama ordered what became Japan’s first “slippers” from the Tokyo craftsman Tokuno Risaburō, although they were actually worn over the shoes. Like today, they were open at the heel, and left and right are said to have been identical in shape. 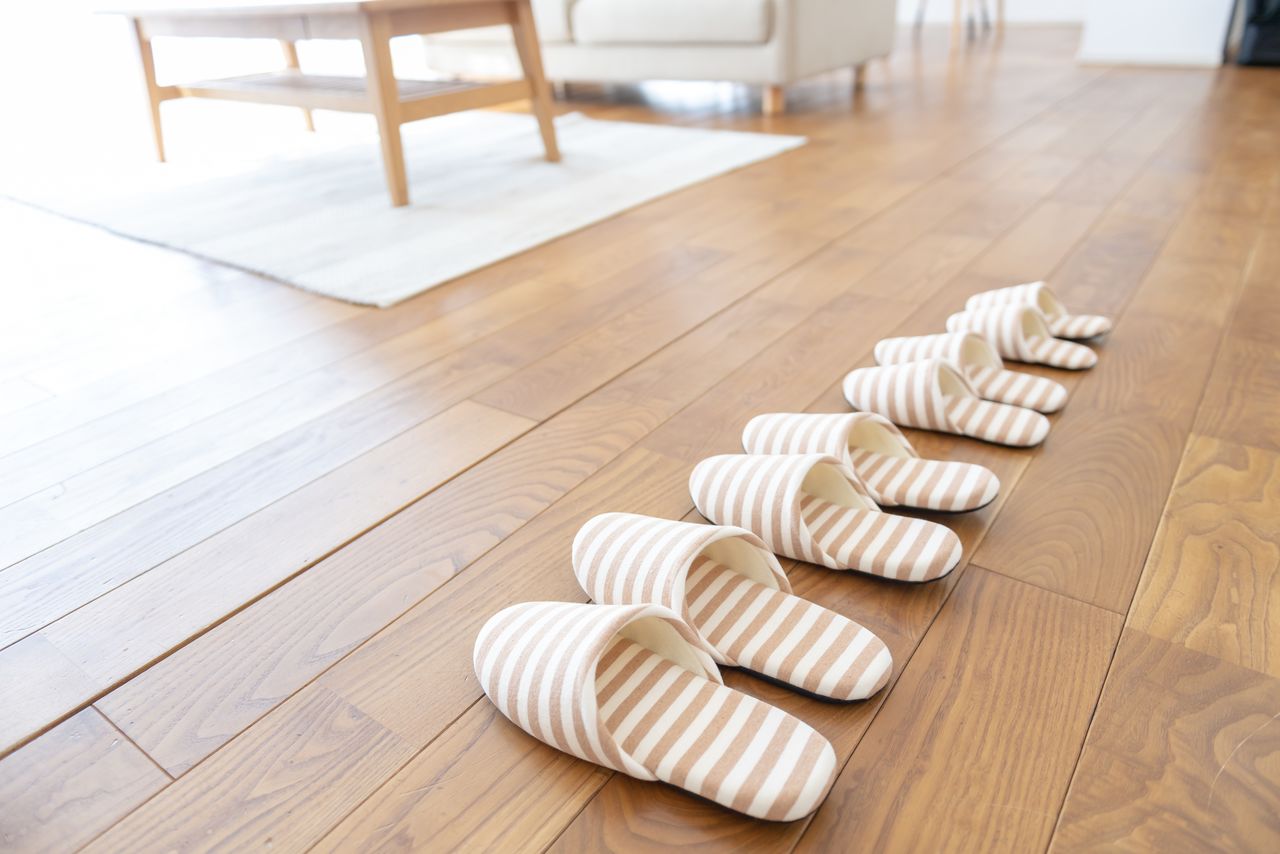 Stripy slippers ready for use in a modern wooden-floored home. (© Pixta)

From around the 1950s, as Japanese lives became more Westernized and dining rooms with wooden floors more common, manufacturers encouraged the uptake of wearing slippers indoors. These were like the footwear of today, and their similarity to zōri or geta may have helped them to catch on. In Japan, shoes come off at the entrances of hot springs and sentō (public bathhouses), shrines and temples, and Japanese restaurants where diners sit on the floor. It is not unusual to see businesspeople negotiating in suits matched with slippers.

Taking off geta in the entrance hall (left) and a line of zōri. (© Pixta) 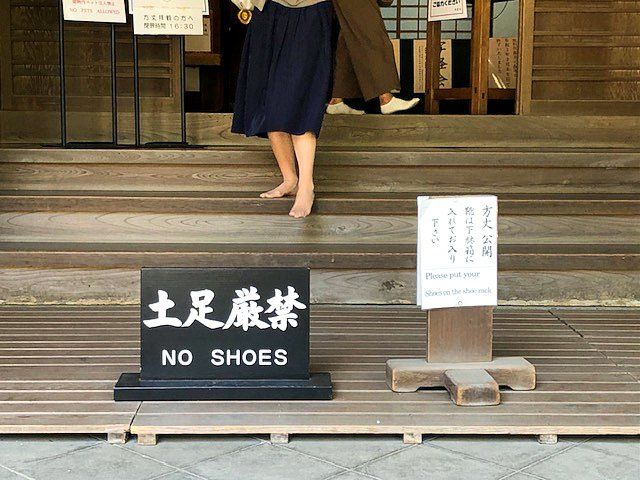 Like many religious buildings in Japan, the temple Engakuji in Kamakura asks visitors to remove shoes. (© Nippon.com)

Some say the habit of taking shoes off in Japan dates back around 2,000 years, and there are picture scrolls from the Heian period (794–1185) showing aristocrats following the custom in their homes.

Due to the country’s hot, humid summers, traditional houses have their flooring raised slightly off the ground to prevent dampness and allow cooling winds to pass underneath. At the entrance, people remove shoes at the ground-level tataki, and step up to enter the house. 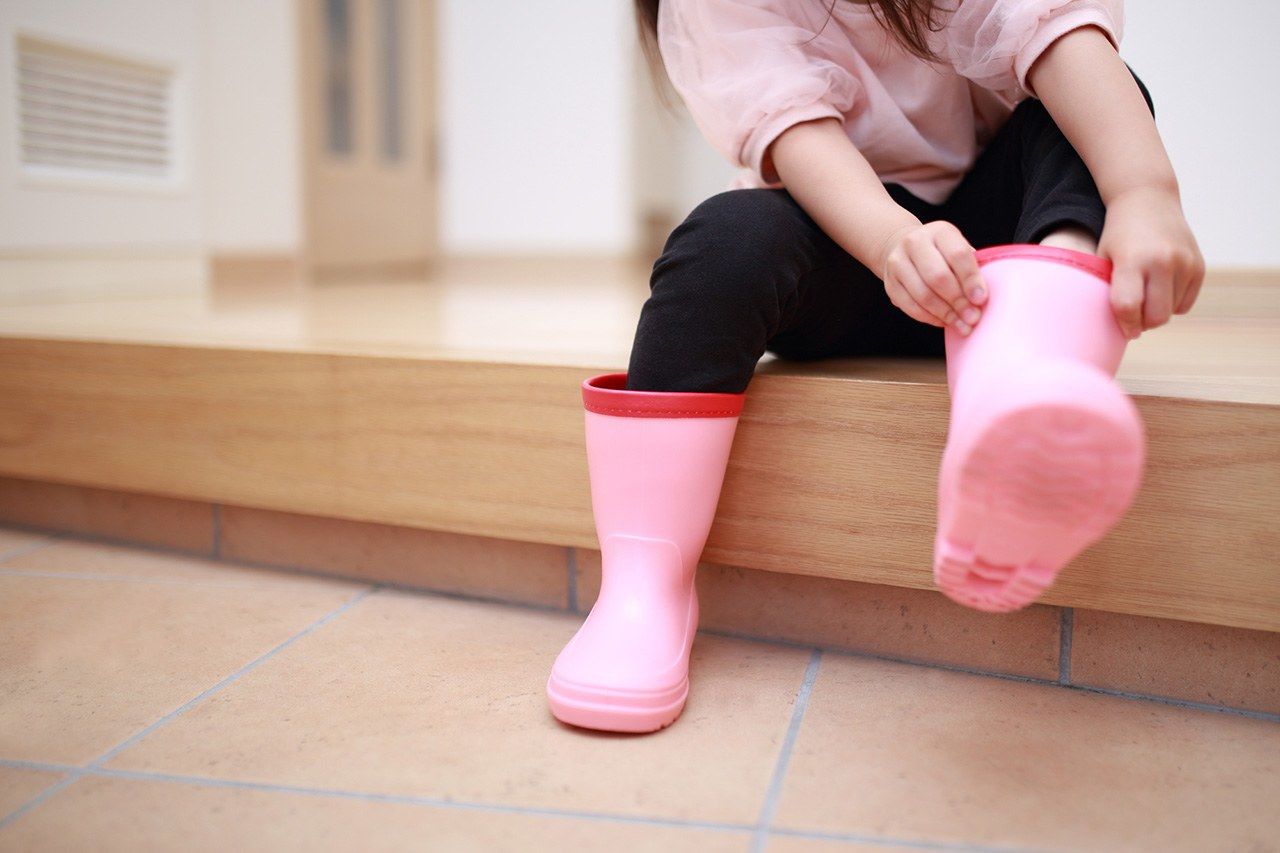 Taking off boots, while sitting on the agarikamachi step, which divides the tataki level from the main house. (© Pixta)

As people sat directly on the tatami or floor, this fostered the habit of taking off footwear dirty from unpaved roads before going inside. Tatami are also a place for laying out futons to sleep. Even slippers are not worn on tatami.

The sociologist Nakane Chie has stressed the importance of uchi (inside) and soto (outside) as a way to demarcate separate spaces in Japanese culture. The inside of the home is seen as a clean space, compared with the dirty outside world, and the entrance hall is a boundary. Shoes are removed to prevent unclean elements from entering and put on to offer protection against these same elements when going out. 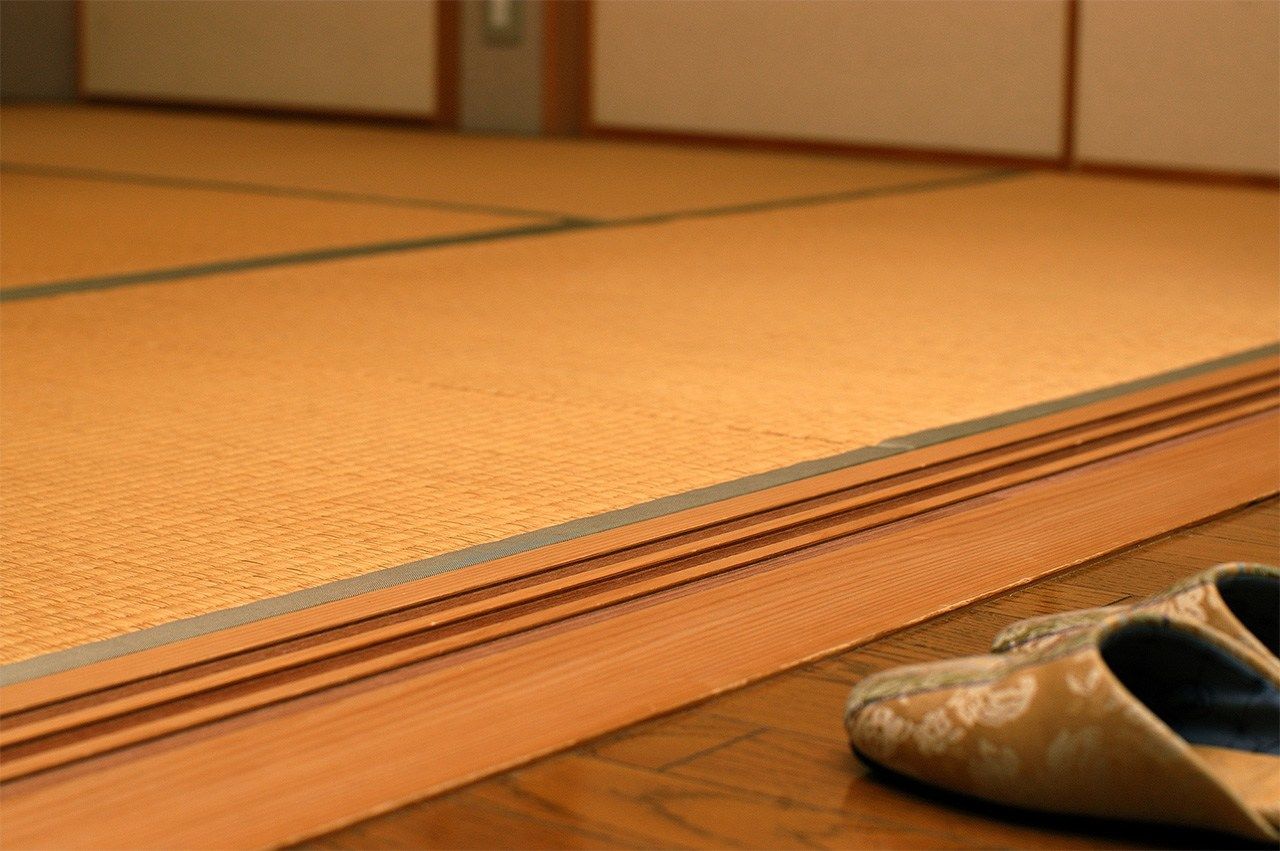 Slippers should be removed before entering a tatami area. (© Pixta)

From elementary to high school level, students at most schools change to uwabaki indoor shoes on entering the building. At domain and temple schools in the Edo period (1603–1868), children would naturally take their shoes off. The switch to dedicated wooden and concrete school buildings, and then from Japanese to Western-style clothing around 1930 led to the idea of using uwabaki instead of children going barefoot or wearing tabi socks. A current popular design similar to ballet shoes was introduced in the late 1950s. There are also schools where sneakers are used as uwabaki.

Typical uwabaki (left; © Pixta) and shelves for storing them at a school entrance (© Photo Library).

Manufacturers are constantly trying to get an edge by promoting new features in their slippers, such as cozy linings, raised bumps for acupressure massage of the soles of the feet, and antibacterial and odor-resistant properties. There are even slippers that can be worn to scrub the floor like mops. Others can be cleaned in washing machines or have been improved to prevent excessive sliding. Some people have different sets of slippers to match the season.