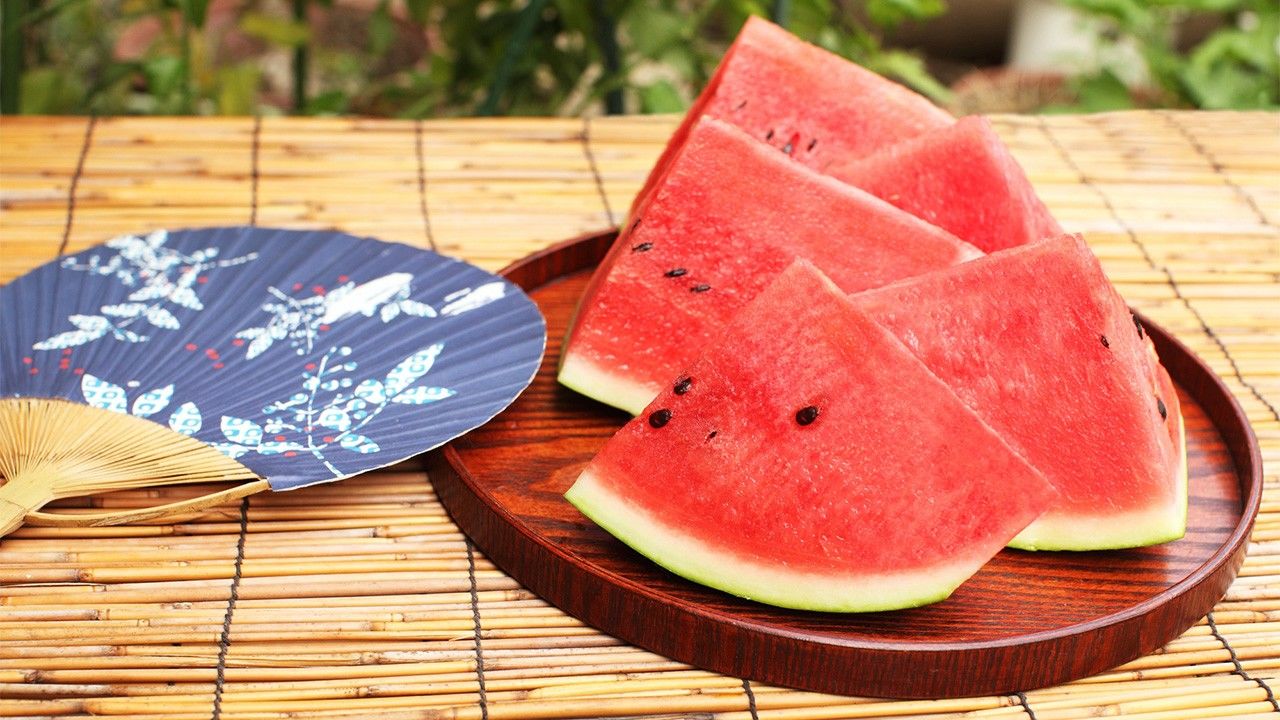 Culture Lifestyle Food and Drink May 31, 2019
Icons of Japanese summer include festivals like Tanabata and Obon, fireworks, and the national high school baseball championship.

Summer, according to the Japan Meteorological Agency, lasts from June to August (although the worst of the heat can last well into September). Across much of the country the start also coincides with the beginning of tsuyu, Japan’s rainy season, a roughly six-week period typified by cloudy skies, damp weather, and average humidity around 80%. Showers are frequent, leading Japanese, by some accounts, to go through a world- record 120 million umbrellas each year.

Tanabata, also known as the star festival, is a summer festival observed on July 7. It is particularly associated with writing wishes on strips of colorful tanzaku paper and hanging them on bamboo branches. 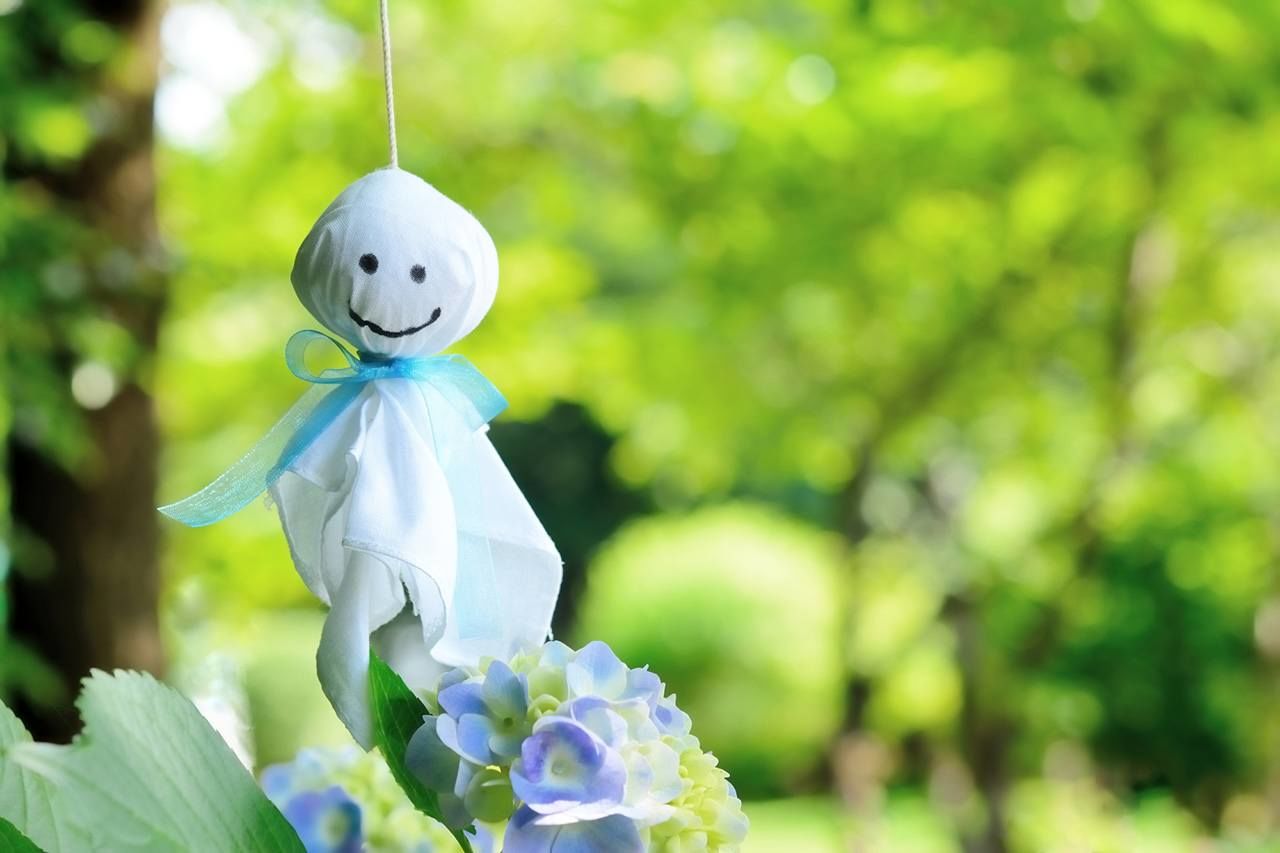 Hydrangeas bloom in the rainy season. People hang teruteru bōzu dolls made from white paper or cloth to express their wish for fine weather.

The rainy season typically ends in mid- or late July, heralding the true beginning of summer. At the height of the season, daytime temperatures regularly climb above 30 degrees Celsius and may even rise to 35 or more for long stretches. Humidity remains high, making for sweltering days and muggy nights. Only the northernmost island of Hokkaidō is largely spared the heat and humidity of the rainy season and summer.

Summer heatwaves are increasingly common and are exacerbated by urban heat islands, and in recent years heatstroke has become a growing concern. Public campaigns encourage people to protect themselves from the blazing sun with hats and parasols and to stave off heat exhaustion by drinking plenty of fluids and taking salt supplements. The traditional Shintō purification practice of sprinkling water on the ground, called uchimizu, has gained attention as a way to cool city roads and sidewalks. 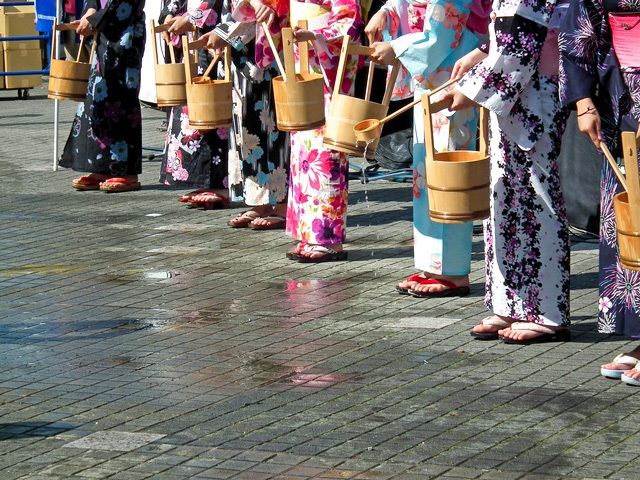 Many of Japan’s biggest music festivals are held during the summer, attracting artists and fans from around the world. These include Fuji Rock in Yuzawa, Niigata Prefecture, Summer Sonic in the cities of Osaka and Chiba, and Rock in Japan in Hitachinaka, Ibaraki Prefecture.

As the temperature rises, beachgoers head to the coast in droves to enjoy activities like swimming, diving, sea kayaking, yachting, and stand-up paddleboarding. One traditional summertime activity on the sands is suikawari or splitting open a watermelon with a stick. Blindfolded players are spun around and follow directions shouted by spectators to guess where the fruit is before taking a swing. 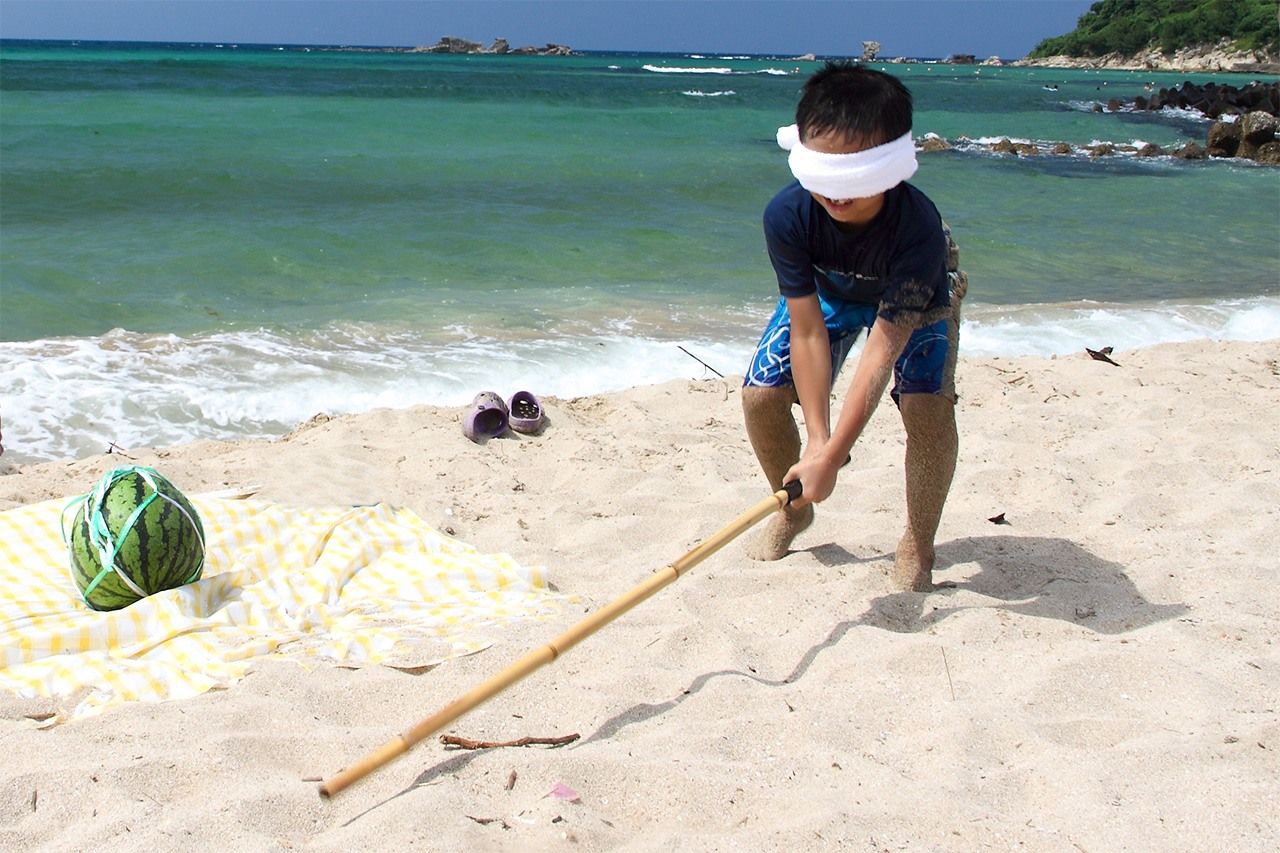 Summer is also a time for heading to the mountains. Notably, the climbing season for Japan’s iconic Mount Fuji runs from around early July to early September. In 2017, the peak welcomed 285,000 climbers.

In August, teams from around the country gather at Kōshien Stadium in Kobe for the National High School Baseball Championship. The tournament, normally referred to simply as Kōshien, has been running for a century and is one of Japan’s most popular sporting events. Traditions include winning teams belting out their school songs after a victory and tearful players from losing sides gathering dirt from the infield to take back to their school as a souvenir to remind them of their efforts. 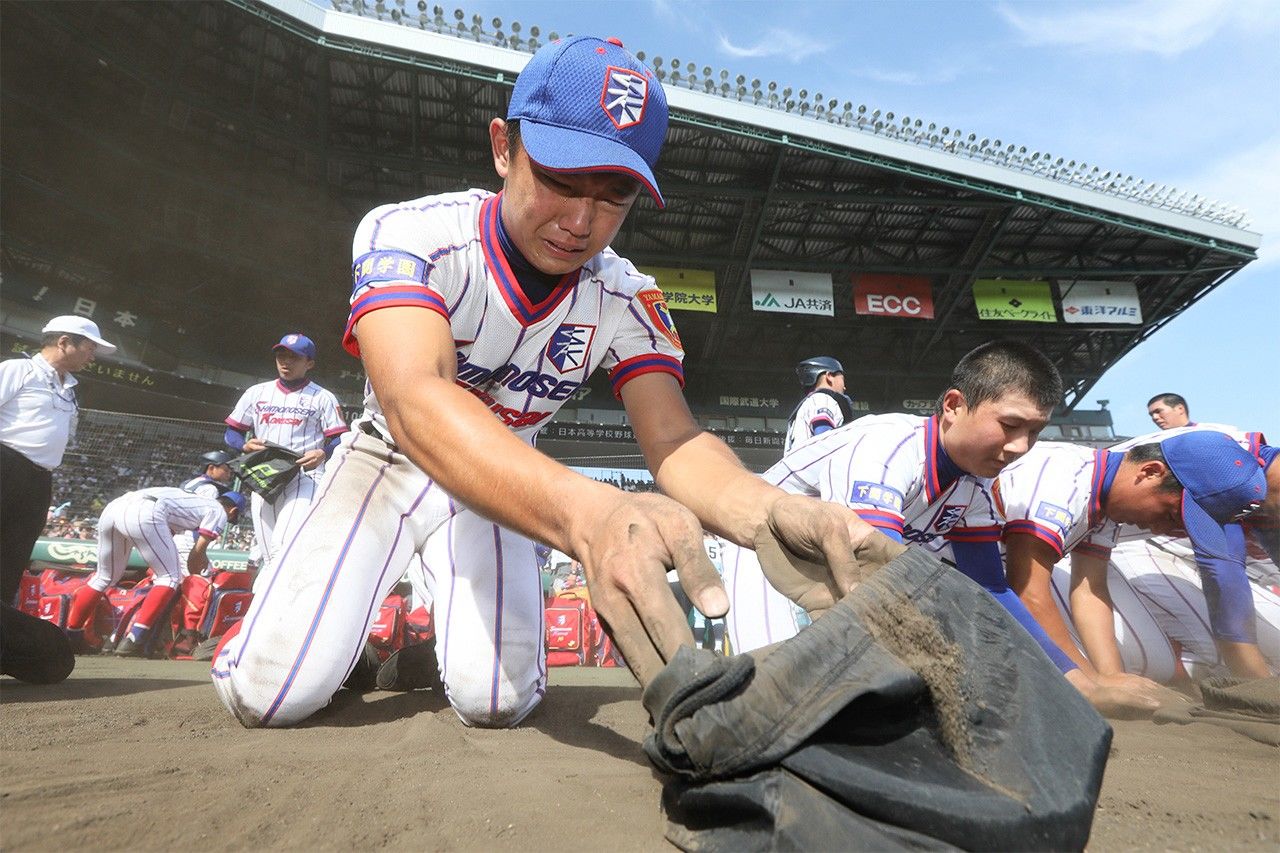 Players from Shimonoseki Kokusai High School collect infield dirt after losing in the quarterfinals to Nichi-Dai San in August 2018. (© Jiji)

The cries of cicadas start to be heard around the time schools close for summer vacation in late July. There are some 30 different species of the singing insect in Japan. In some cases their varying calls give them their names, including the minminzemi (“min-min” cicada) and the tsukutsukubōshi. Hearing the latter indicates that autumn is on the way.

High humidity brings plenty of mosquitoes, which Japanese battle with an array of insecticides and repellents. In 1890, an Osaka company developed the world’s first mosquito coil, using pyrethrum—a natural insecticide derived from dried flower heads—imported from the United States. 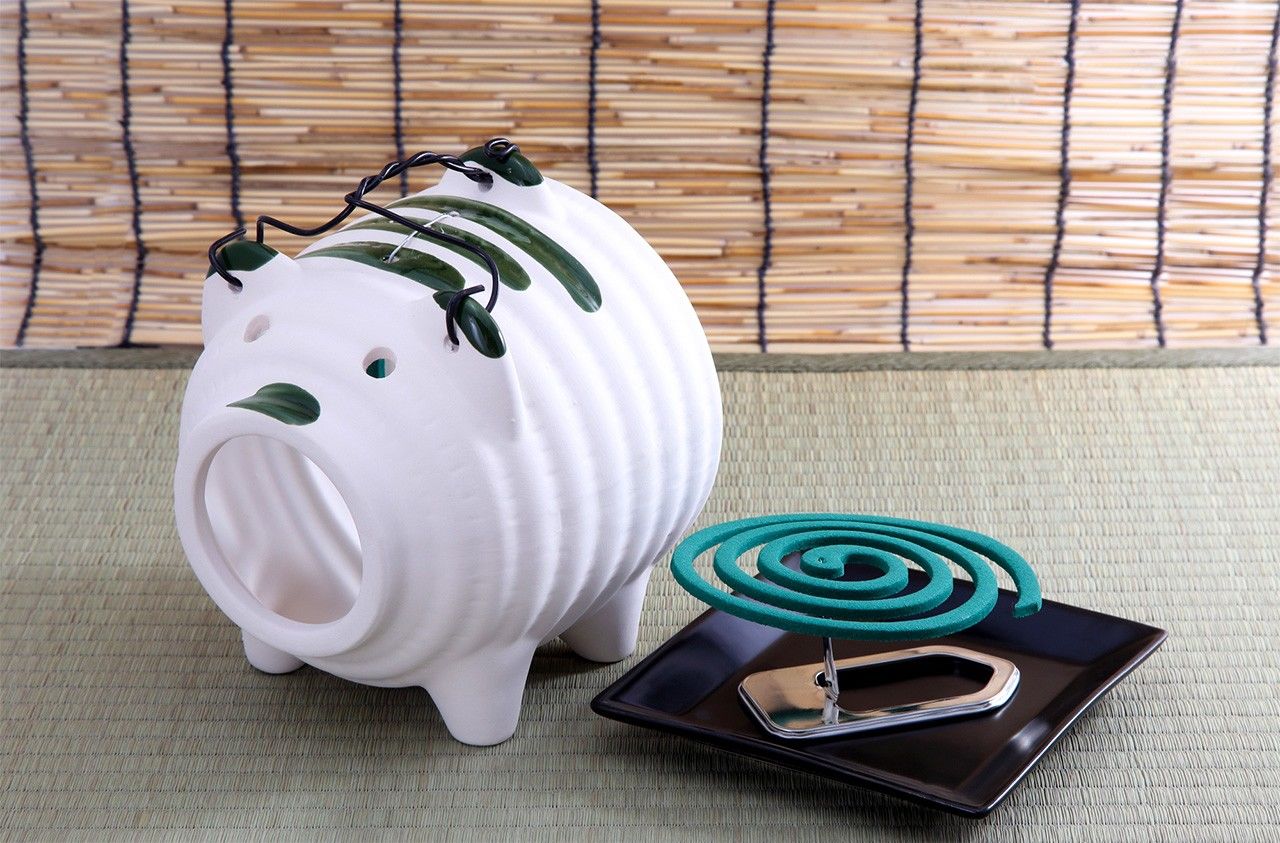 Summer flowers grown in Japan include the morning glory, sunflower, lotus, and the evening primrose. A morning glory festival has been held at Iriya in Tokyo every July for 60 years. 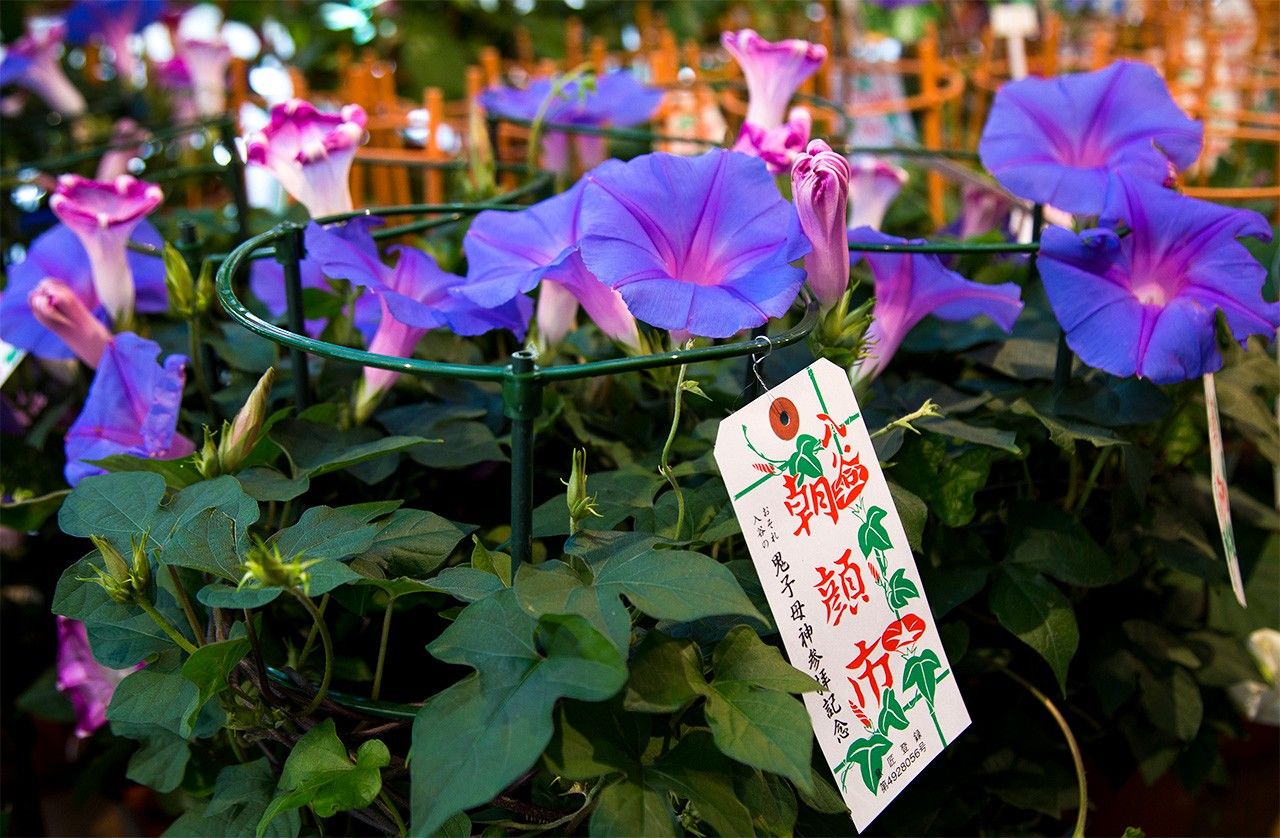 Morning glories at the Iriya festival.

Eel has traditionally been a summer food for beating the heat, although declining stocks have caused the creature to be officially declared an endangered species. Knocking back a cold beer or two with snacks like edamame soybeans at a rooftop “beer garden” is a popular way of cooling down. The first of these establishments opened atop the New Tokyo Osaka Daiichi Seimei Building in Osaka in 1953 and is still in business today. 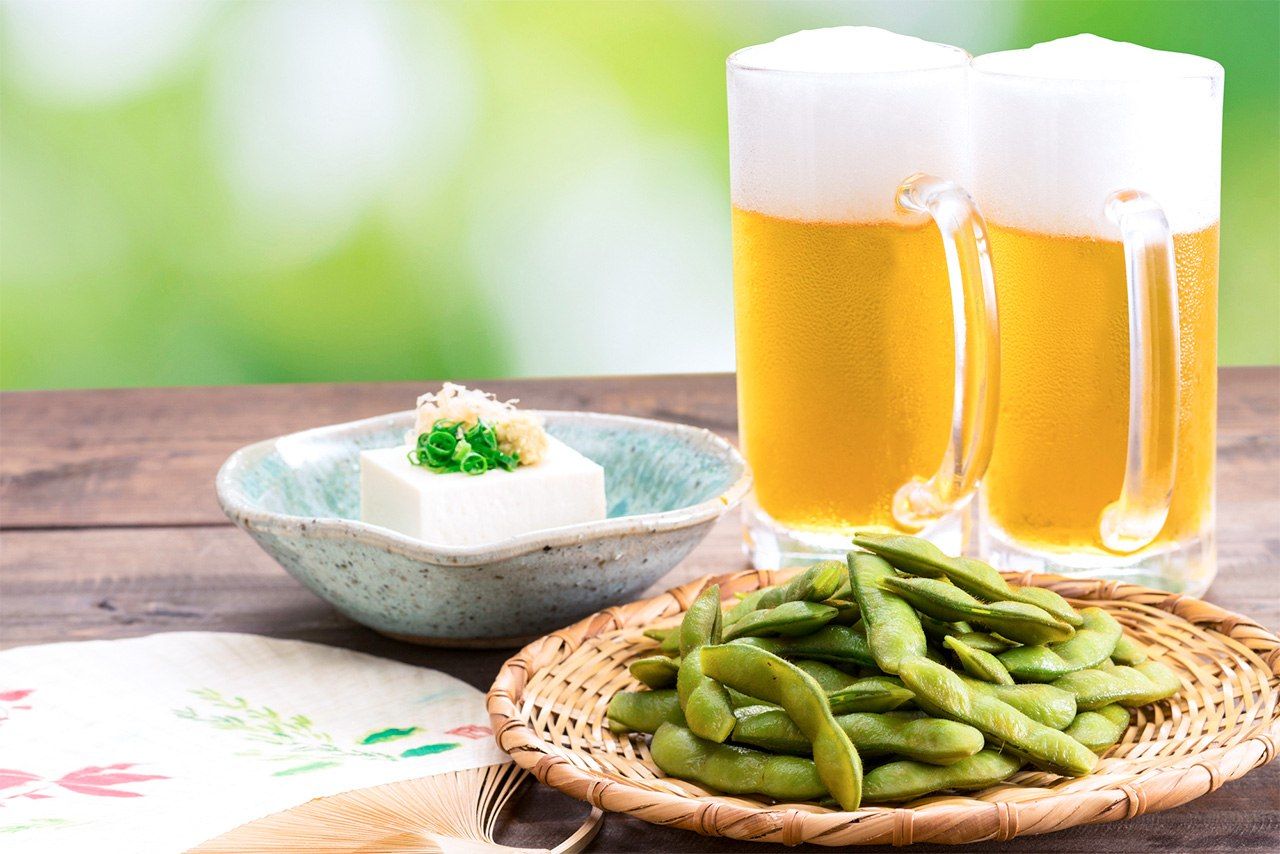 Another taste of summer is provided by kakigōri or shaved ice, whether with traditional accompaniments like sweet bean paste and syrup or modern toppings like fruit and ice cream. Chilled watermelon is a tasty summer fruit to enjoy, and smaller varieties that fit in compact Japanese fridges are increasingly in demand. 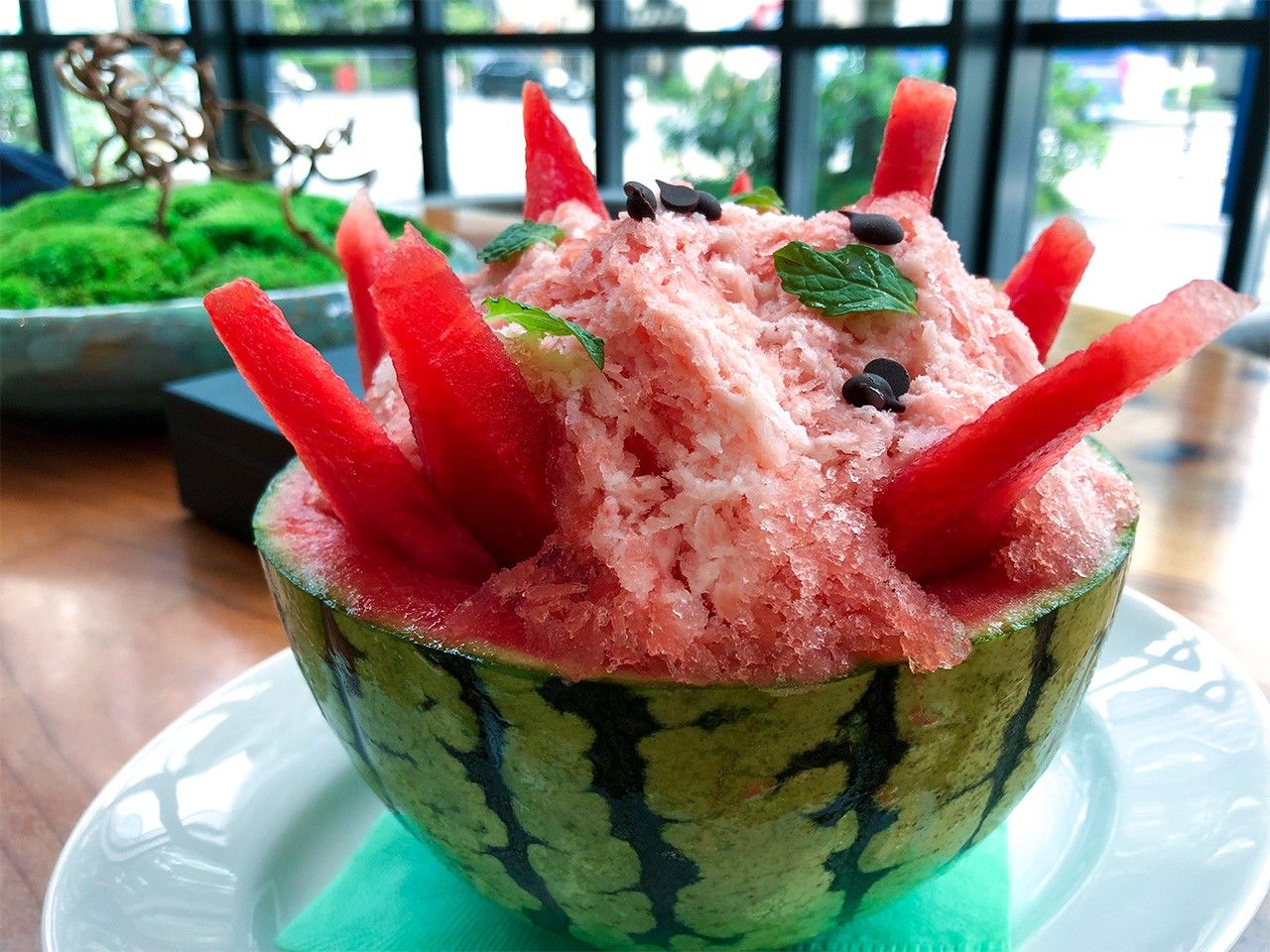 Kakigōri served in a watermelon bowl.

A favorite summer dish is sōmen, thin noodles made simply from flour, water, and salt. Typically served cold with condiments like negi onions, ginger, shiso, and myōga (a type of Japanese ginger) in a savory dipping sauce, it is a refreshing way to banish heat and fatigue. 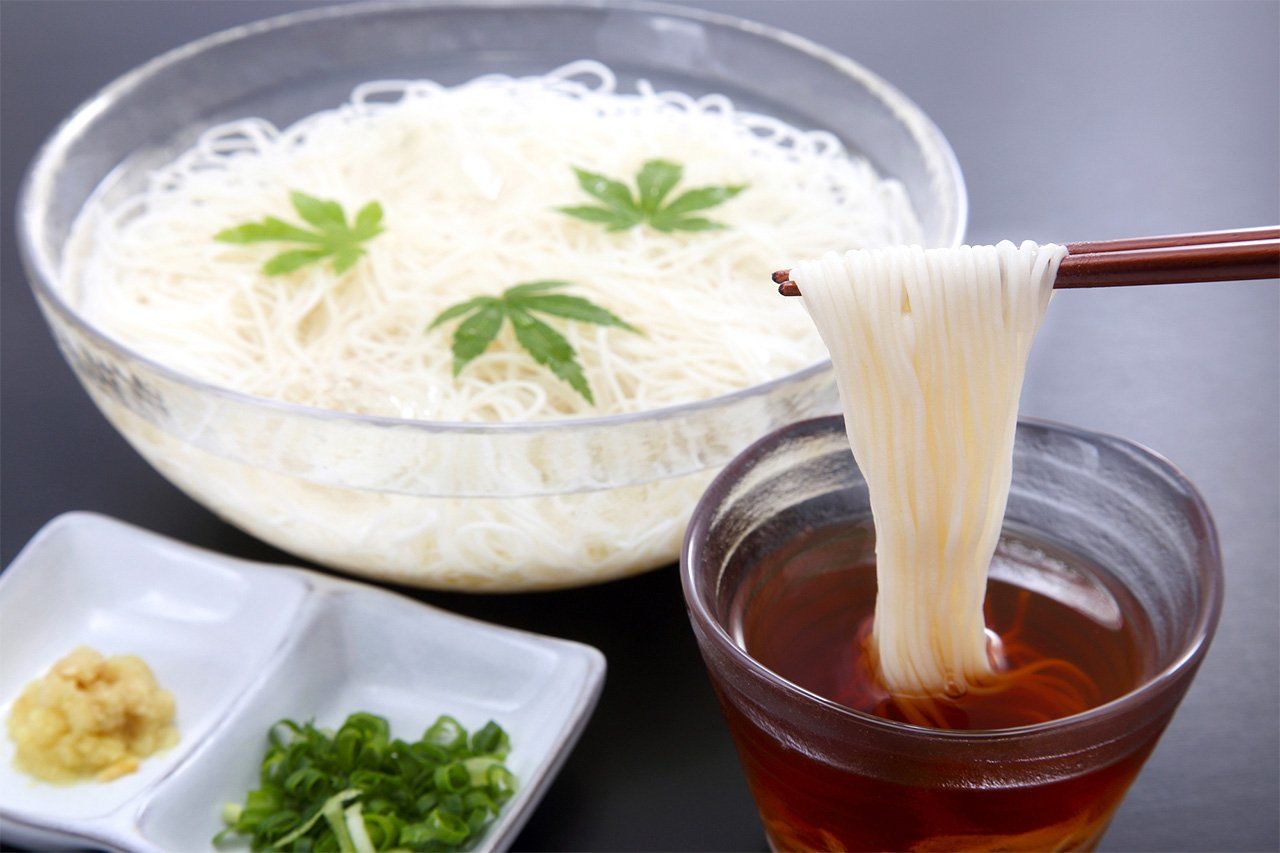 A Time for Remembering Ancestors

On August 15, Japan marks the anniversary of the end of World War II. At the same time around much of the country, the festival of Obon is held, when Japanese people honor their ancestors by welcoming them to their homes and visiting their graves. It is common for employees to have time off work and return to family homes.

Traditional lighting of fires to guide ancestors’ spirits spurred on, by association, the popularity of summer fireworks. Many people dress up in yukata to attend summer festivals, firework events, or bon odori dances. 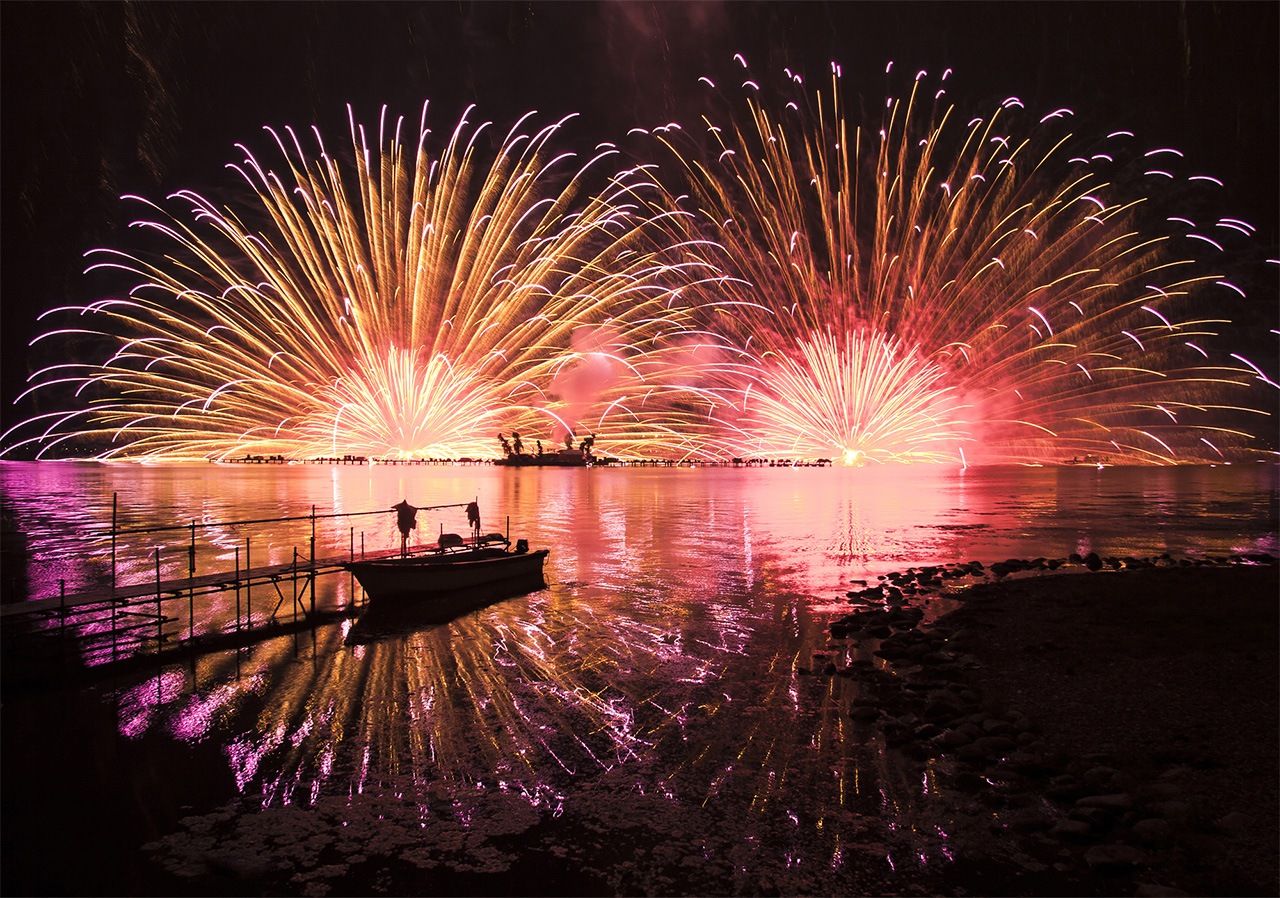 The Lake Suwa Fireworks Festival is one of Japan’s biggest, with some 40,000 shells launched into the sky.

Summer festivals are a favorite destination for Japanese kids. Stalls sell knickknacks like character masks and simple toys and let kids try their hand at games like scooping for “yo-yos,” actually balloons with attached rubber bands for contestants to snag with their hooks. There are also yatai stalls where revelers can buy snacks like okonomiyaki (a kind of savory pancake) or takoyaki (round dumplings containing octopus meat). One of Japan’s biggest summer festivals is the Aomori Nebuta Matsuri, held in the north of the country, which attracts millions of attendees. 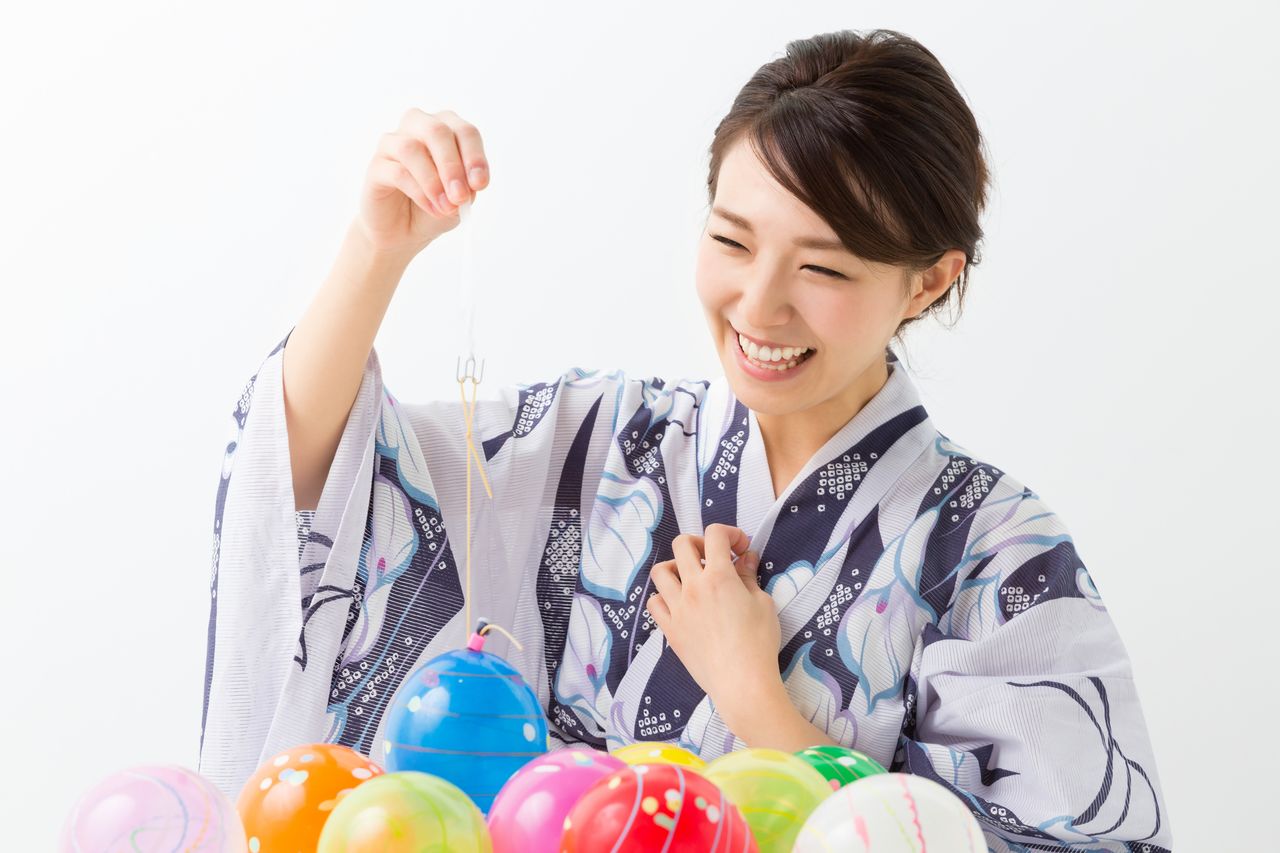