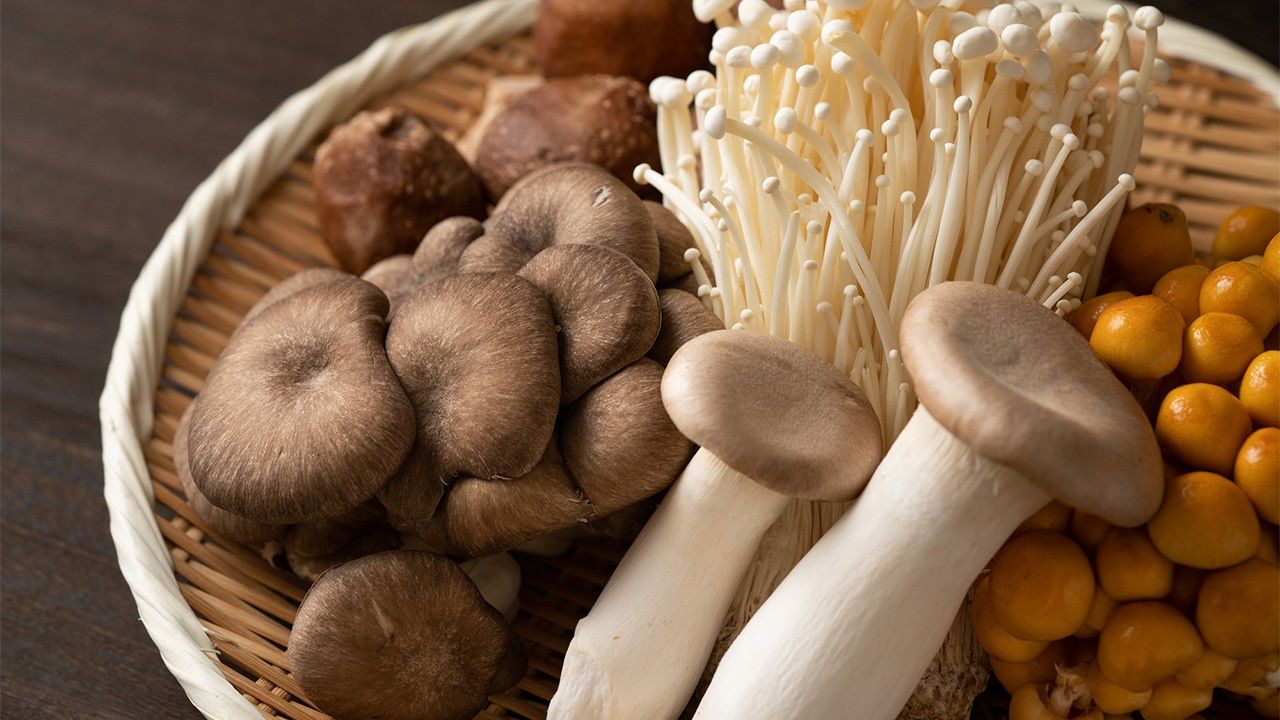 Mushrooms: A Staple of the Japanese Table

Food and Drink Nov 19, 2021
Mushrooms are traditionally part of autumn’s bounty, but consumers today can enjoy numerous farmed varieties year round. Below we introduce the culinary history of mushrooms in Japan along with popular types available in Japanese supermarkets.

Mushrooms have been an autumn staple in Japan for a very long time. Ceramic mushrooms excavated from ancient Jōmon sites indicate that they were regularly consumed as far back as 4,000 years ago. They are valued for their flavor and fragrance as well as their nutritional properties, which include high concentrations of fiber, vitamins B and D2, and minerals. More recently, mushrooms have been found to benefit immune health and to help alleviate the effects of lifestyle diseases.

The word mushroom in Japanese, kinoko, is thought to derive from the tendency of the fleshy fungi to grow on and around trees (ki), particularly decaying logs and old trunks. Japan’s humid climate supports upward of 5,000 varieties of mushrooms, only a handful of which, some 100 species, are edible. Fresh and dried types feature in a wide variety of cuisines.

From Seasonal Treat to Daily Food

In the past, most varieties of mushrooms were only available in autumn and had to be collected by hand. Around 300 years ago, records suggest that Japanese farmers began to cultivate shiitake, using small logs specially prepared with spores of the fungus. An improved version of this bed-log cultivation method is still used today. The development of new farming methods like growing rooms with carefully controlled environments and the use of sawdust treated with specific nutrients as a growing medium have made it possible for consumers to enjoy inexpensive, freshly picked mushrooms any time of the year. There are around 20 commercial varieties sold at supermarkets and other stores, including popular types like nameko, enokitake, and shimeji.

Matsutake is one coveted type that has evaded domestication, though. The fragrant mushroom is found around the world and typically grows on forests floors near species of pines and firs. Large specimens can fetch high prices. However, environmental change has seriously impacted populations of matsutake worldwide. In 2020, the International Union for Conservation of Nature placed the mushroom on its Red List of species threatened with extinction. 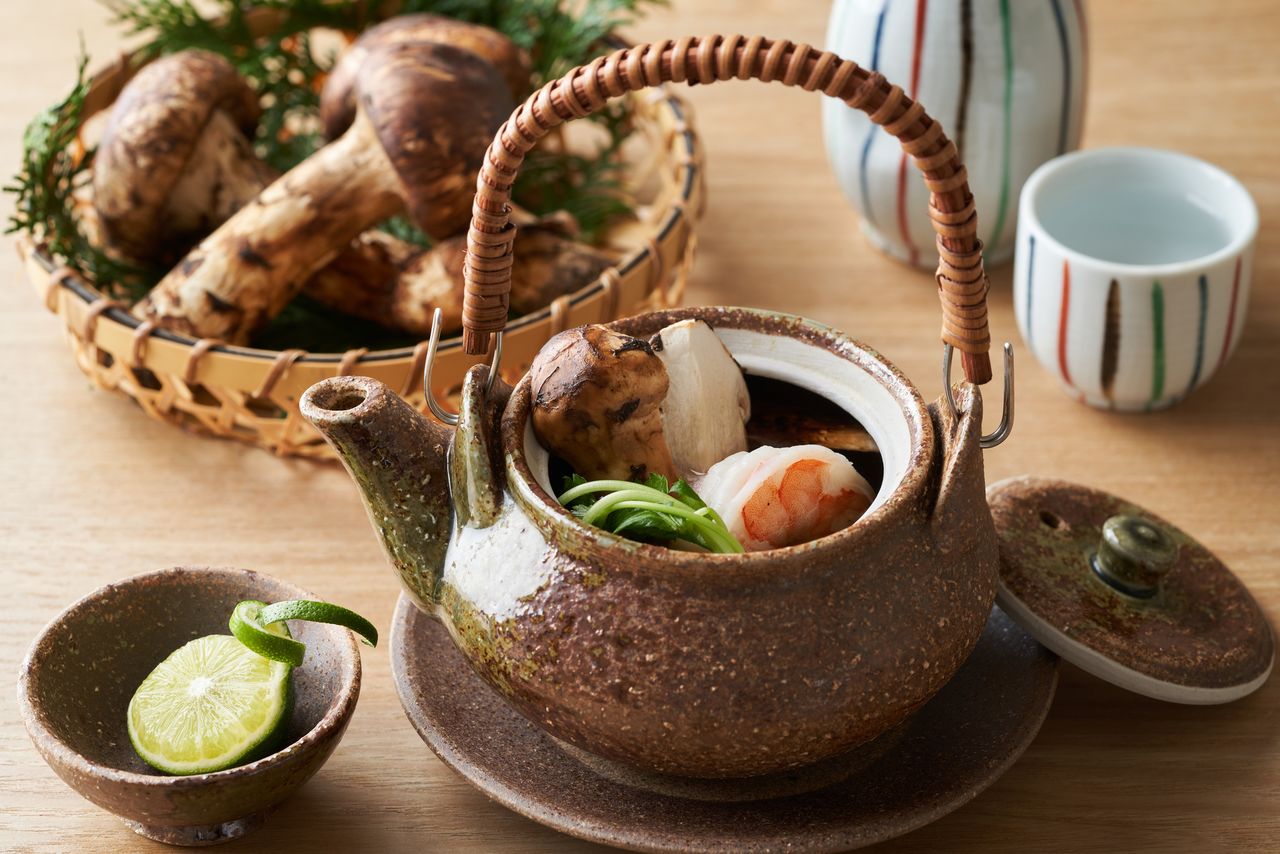 An elegantly arranged dobin-mushi consisting of matsutake, shrimp, and gingko nuts steamed in dashi, with a dash of fragrant sudachi. 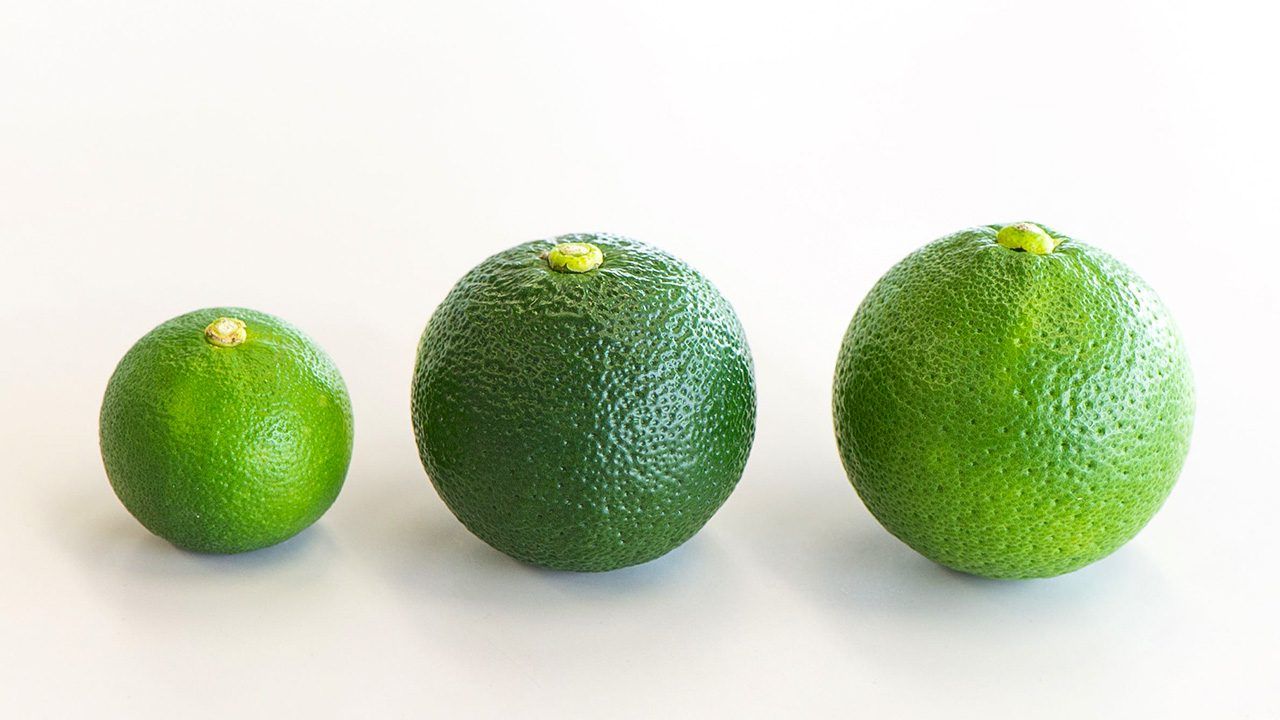 Autumn in Japan is a time for great food. Many of the season’s key dishes are perfect for showcasing some important supporting players: kōsan kankitsu, or sour citrus. Japan has over 40 varieties of these highly acidic citruses used primarily for flavoring. This article goes on a deep dive into the past and present of these essential tastes of Japan.

This versatile mushroom has long been a staple of Japanese cooking and remains the most popular variety. It has a broad brown cap and white stem. The meaty texture and umami-rich flavor make it suited to a range of cuisine, including sautés and soups. Fresh and dried varieties are widely available, the latter helping bring a savory punch to broths. Shiitake are high in vitamin D, which helps the body absorb calcium.

The quintessential autumn mushroom, matsutake are cherished for their rich flavor and fragrance, with prime specimens fetching eye-popping prices. Populations are in decline in Japan and elsewhere, and efforts are underway to preserve the prized mushroom. 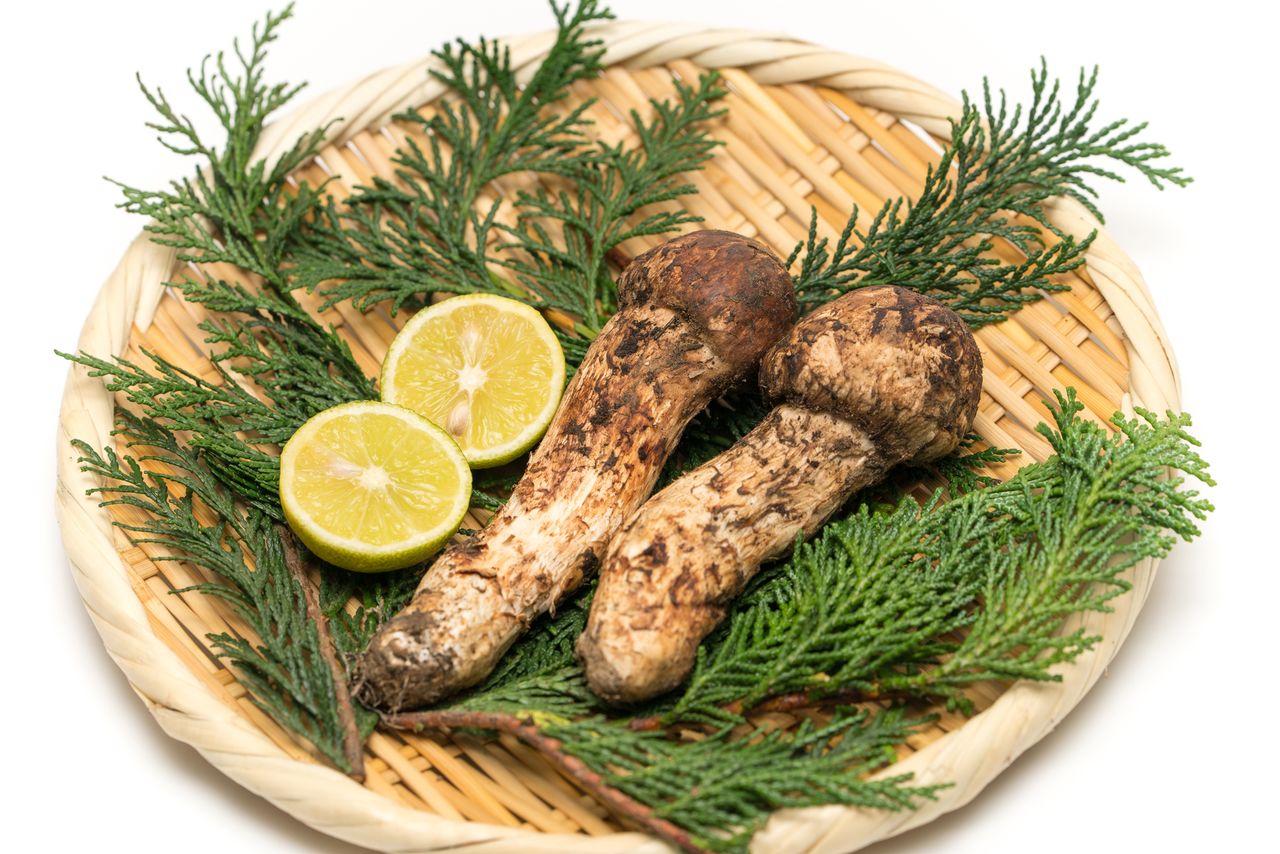 Matsutake are signature autumn treats, but can be expensive to enjoy.

Also known as hen-of-the-woods or ram’s head, maitake are distinguished by the ruffled appearance of their multiple greyish caps. Native to China, Europe, and North America, they thrives in warm, wet environments. The mushroom is commonly grown using sawdust cultivation. The Japanese name, which combines the kanji for “dance” and “mushroom,” is thought to derive from the excitement induced by finding a specimen of the flavorful species. Maitake’s rich fragrance and hearty flavor lend it to inclusion in a variety of dishes. 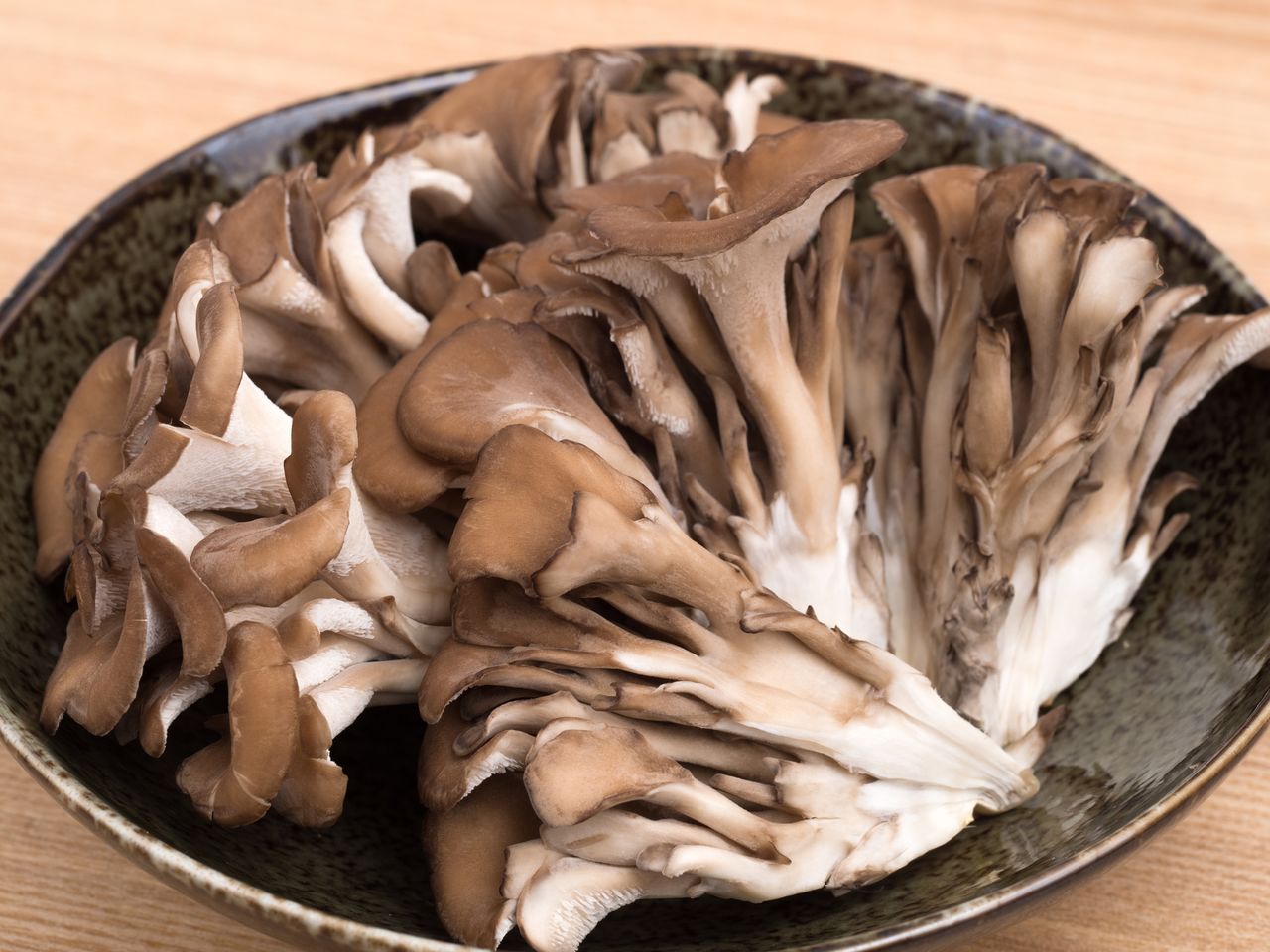 Maitake is recognizable by its distinct appearance.

Eringi, also known as the king trumpet or king oyster mushroom, is a relative newcomer to Japan, having first been cultivated in the country in 1993. It has a thick stem and small, flat cap, and the flesh is firm with a savory flavor. The texture when cooked is similar to abalone and other seafood, making the mushrooms popular as a main or side dish.

Typical uses: grilled on a pan or in foil, sautés 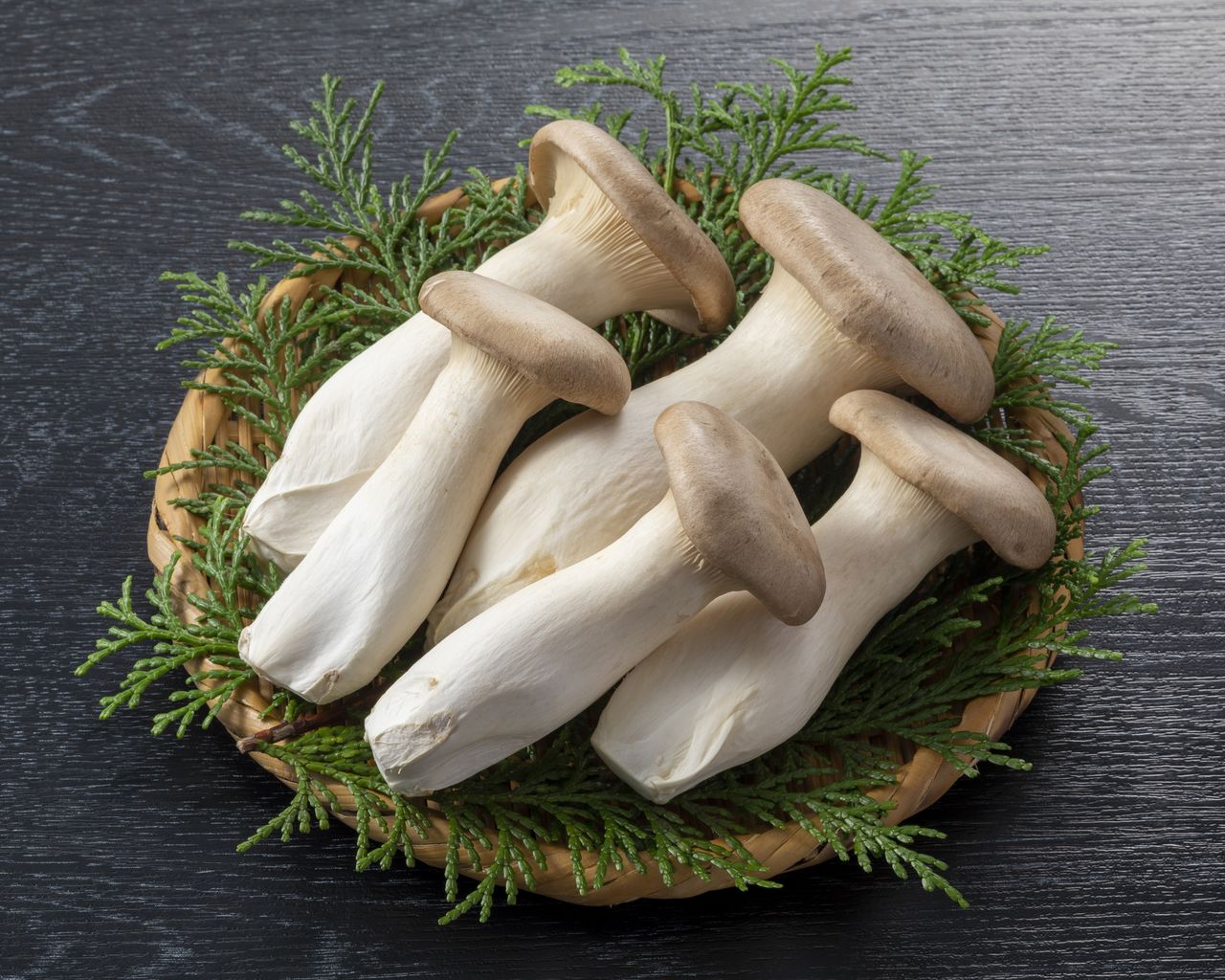 Japanese prefer eringi with caps that have yet to fully open and are still slightly curled.

Known in some countries as velvet shank or winter mushrooms, enokitake in Japan are cultivated in dark conditions, giving them a white color in contrast to the brown hue of wild specimens. They are typically sold in bunches of small mushrooms with long, slender stems and tiny caps. Enokitake have a crisp texture and are used in a variety of Japanese dishes as well as Chinese and Korean cuisine.

Nameko have long, slender stems and small, amber caps. Known in some areas as butterscotch mushrooms, they have a distinctly slippery exterior that some may even describe as “slimy.” In the wild they are found on decaying beech trees. Farmed varieties are typically trimmed short and sold in plastic packets. Nameko are most suited to soups.

Also known as wood ear mushrooms, kikurage grow on the decaying trunks and branches of broadleaf trees. The most common variety in Japan is the arage-kikurage. Domestic cultivation is still limited in scope and the majority of kikurage in Japan, over 90%, are imported. While sometimes available fresh, they are typically sold in dried form. They have a firm, chewy texture and are widely used in Chinese and Korean cuisine.

Firm and mild flavored, shimeji are suited to a variety of cooking styles and recipes. They are distinguished by long white stems and small brown caps. Native to Asia, they thrive in wet environments. Common varieties include buna-shimeji and hon-shimeji. The phrase, “For fragrance, matsutake; for flavor, shimeji,” is a way of saying that everything has different strong points.

(Banner photo: An assortment of popular mushrooms. All photos © Pixta.)