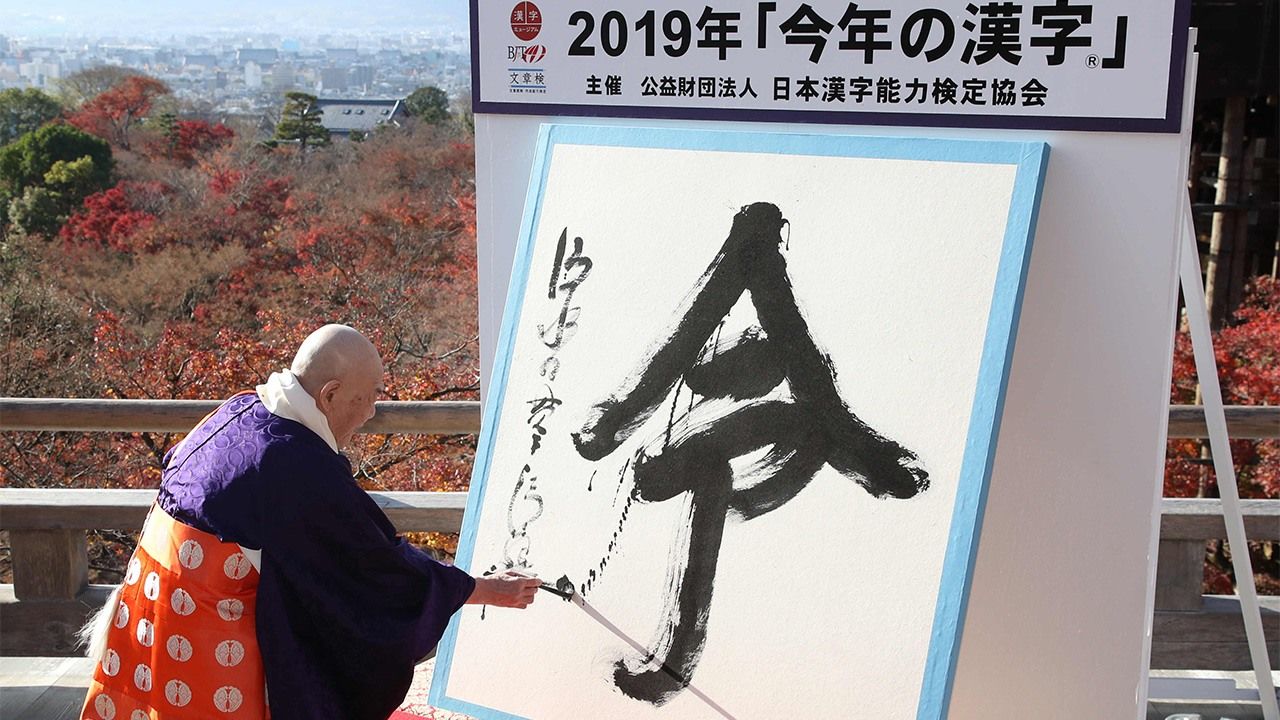 Culture Language Society Dec 12, 2019
This year Japan saw the Heisei era end and a new one begin: Reiwa, the name for the reign of Emperor Naruhito. The character 令 (pronounced rei or ryō) from this term has been chosen as the Kanji of the Year for 2019.

In a ceremony at the Kyoto temple Kiyomizudera on December 12, the Japan Kanji Aptitude Testing Foundation announced its Kanji of the Year for 2019: 令, pronounced rei or ryō, the first part of 令和 (Reiwa), the name for the new imperial era that began on May 1 this year.

Each year on December 12, a date chosen for the way its 12/12 numbers can be read ii ji ichi ji (one good character), the organization releases the results of public voting for the character that best encapsulates the year. A total of 216,325 votes were cast in 2019, and the top finisher took 30,427 of them, making it the clear winner with more than 14% of the total. Comments from voters indicated that the main reason for their choice was the new era name, but the character also features in terms like 法令改正 (hōrei kaisei), the “legal revision” that bumped the consumption tax rate from 8% to 10% on October 1, and 避難命令 (hinan meirei), the “evacuation orders” that reached many residents when typhoons or other natural disasters threatened their communities.

Other kanji in the top ten included 新 (shin/atarashii), meaning “new,” also inspired by the launch of the new era, and 和 (wa), the “peace” providing the second half of its name. Last year’s winner, 災 (sai/wazawai), placed fifth this year as many voters chose it to refer to the disasters that struck Japan this year as well. The deadly storms that swept the archipelago also added “water” and “wind” to the list.

Voters cast their ballots online at the foundation website, by postcard, or in person at ballot boxes installed in bookstores around the country. A comment space on the ballots let them explain their choices. Among those voting for 令 were those expressing pride in the first-ever selection of an imperial era name from a native Japanese literary source, the eighth-century Man’yōshū, rather than from the Chinese classics that have provided previous names. Others pointed to the character’s classical senses of “good” or “venerable,” rather than the more commonly recognized “order” or “directive” meanings in its modern usage. Some, though, pointed out that the character’s “command/injunction” sense was also relevant in a year that saw celebrities fail to uphold the 法令 (hōrei, “law”) in a string of scandals.

Voters for the second-place finisher 新, meanwhile, mentioned not just the “newness” of the Reiwa era, but also the construction of the new Olympic stadium in central Tokyo, the new emergence of sports stars like the NBA’s Hachimura Rui and pro golfer Shibuno Hinako, and even the profusion of new cashless payment methods that swept the retail industry this year.

Looking ahead to the Tokyo Olympic and Paralympic Games of 2020, some kanji-watchers expect 金 (kin/kane), meaning “gold,” to perform well as it has in the past, coming out on top in three Olympic years. But the Kanji of the Year reflects the year that was and the people’s takes on it, and nobody can say for sure what next year will bring. 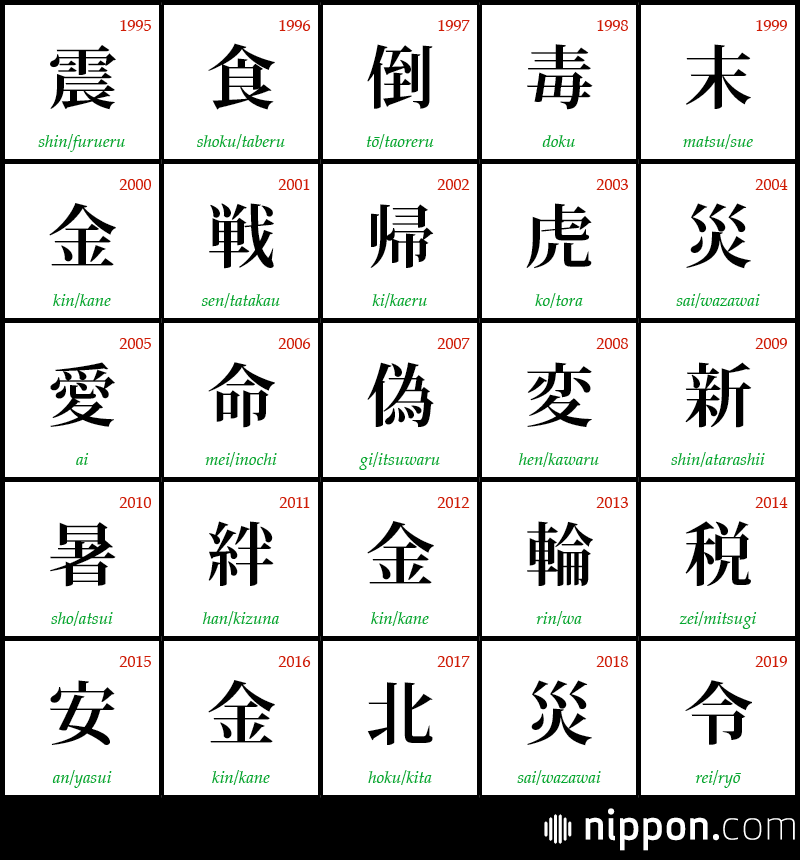 (Originally written in English. Banner photo: Kiyomizudera head priest Mori Seihan writes 令, the Kanji of the Year, at a ceremony at the Kyoto temple on December 12, 2019. © Jiji.)